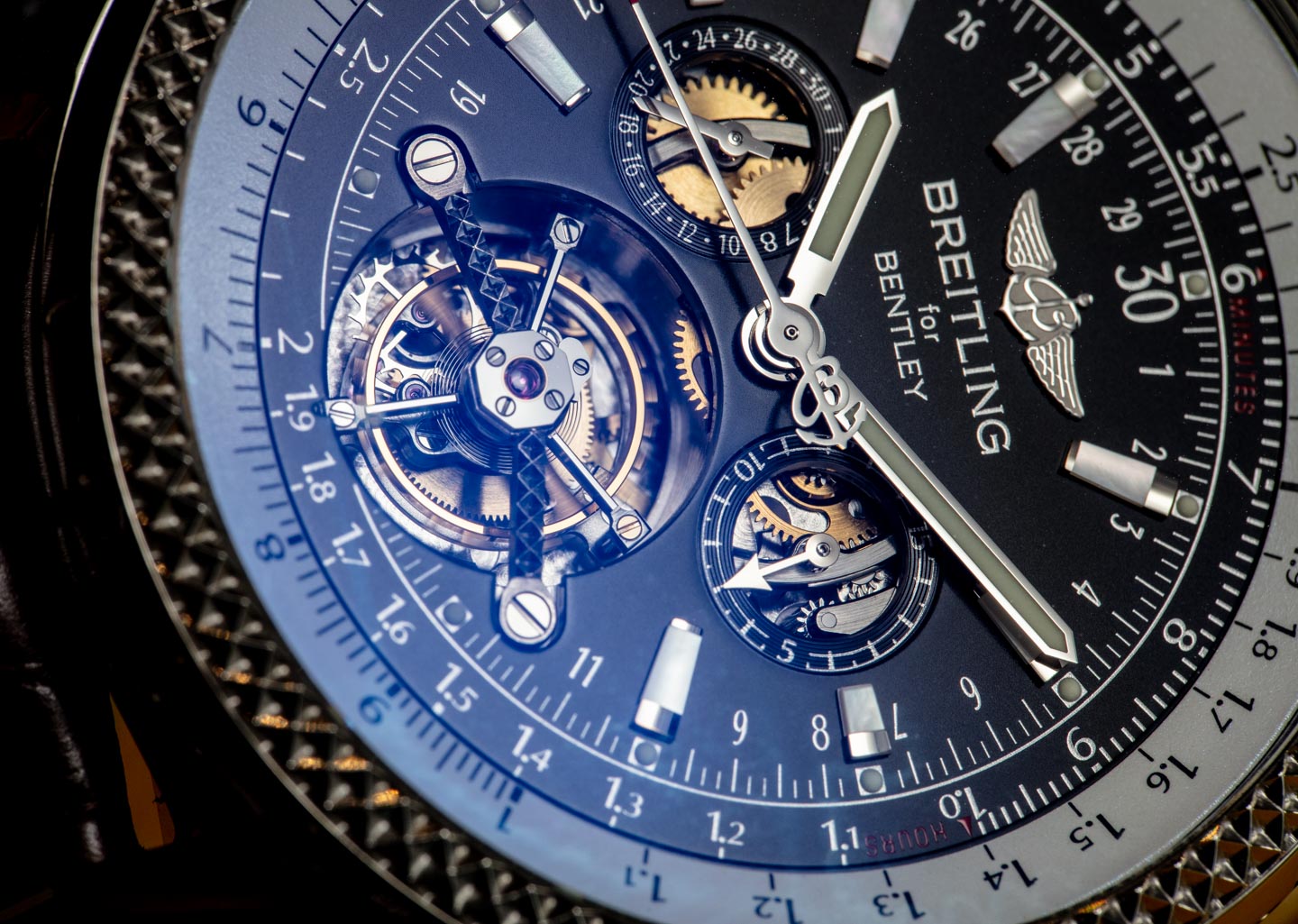 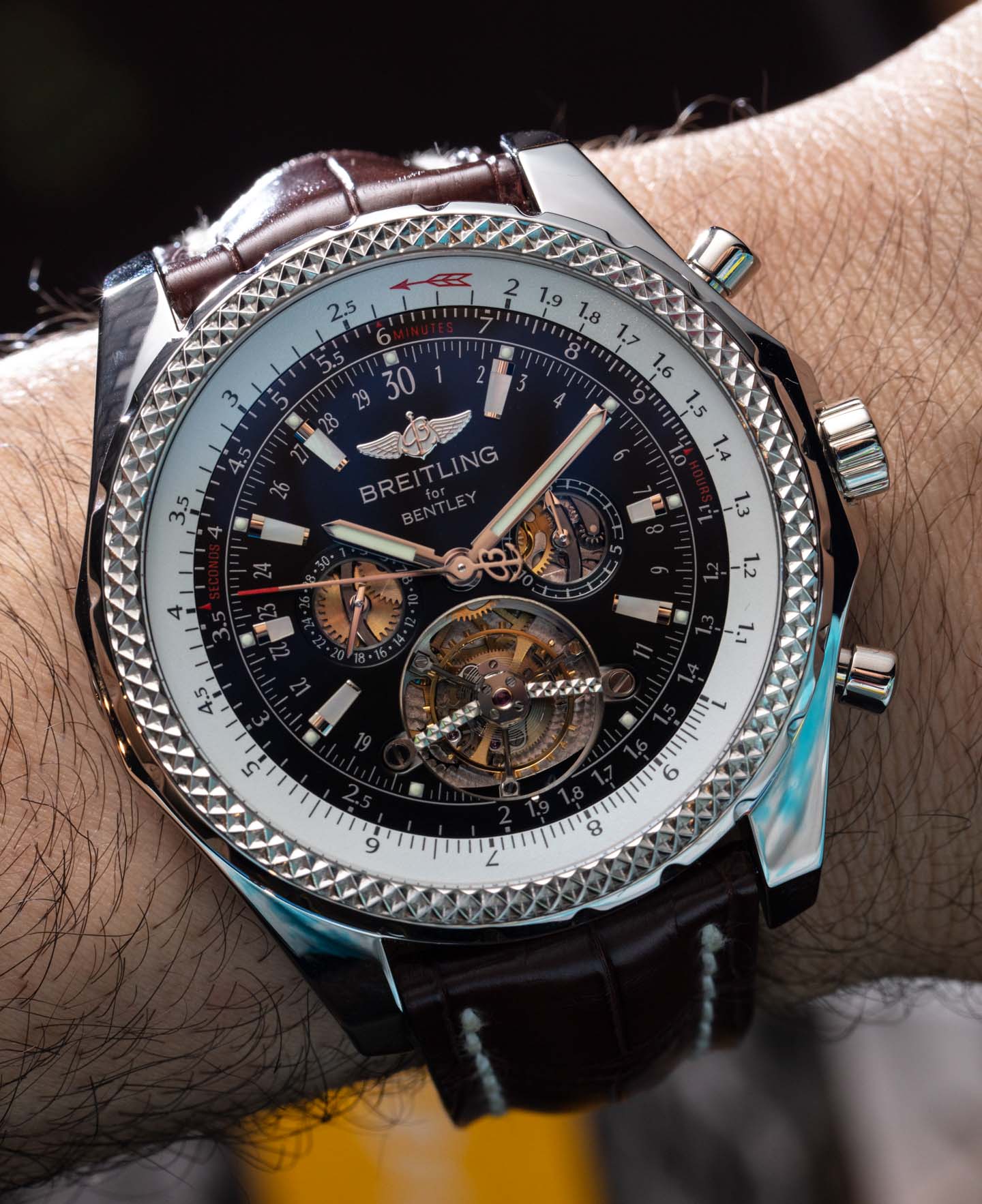 Now, this is a Breitling watch that you don’t see every day. What we have here is a legit Breitling, but not one that you’ll actually find on the brand’s website (at least right now). Produced for a few years starting in 2005, and part of the long-time Breitling for Bentley timepiece collection (considered a rare “watch + car collaboration” success story), this is the Breitling for Bentley Mulliner Tourbillon Chronograph — and it has a retail price of over a quarter-million dollars. The watch is meant to go with Bentley’s most elite automobiles that fall under its Mulliner line, which is where a lot of the personalized work they do goes. If you are the type of person who gets a customized Bentley, perhaps this nearly 49mm-wide Swiss Made tourbillon lifestyle sports watch that matches your car will seem like a sensible accessory.

I don’t really know why Breitling is so hush-hush about timepieces such as this. Consider how hidden they are. As I mentioned above, you can’t actually find reference to this watch on the Breitling website. If there is one in a Breitling store, it is in the back in a safe and never on display. Imagine if you are an average consumer who doesn’t understand how sometimes watch brands make phantom watches that they don’t communicate about. Might you not assume this is not a real Breitling? Sure, the timepiece is very well made and the tourbillon movement is very attractive. Having said that, this particular watch design is a stone’s throw from fake Breitling watches that are out there. This means that someone would not be crazy to question whether or not Breitling actually made this watch. I’m not saying that Breitling needs to advertise the watch, but at least listing it on the website would prove that the company indeed made it. Just saying… 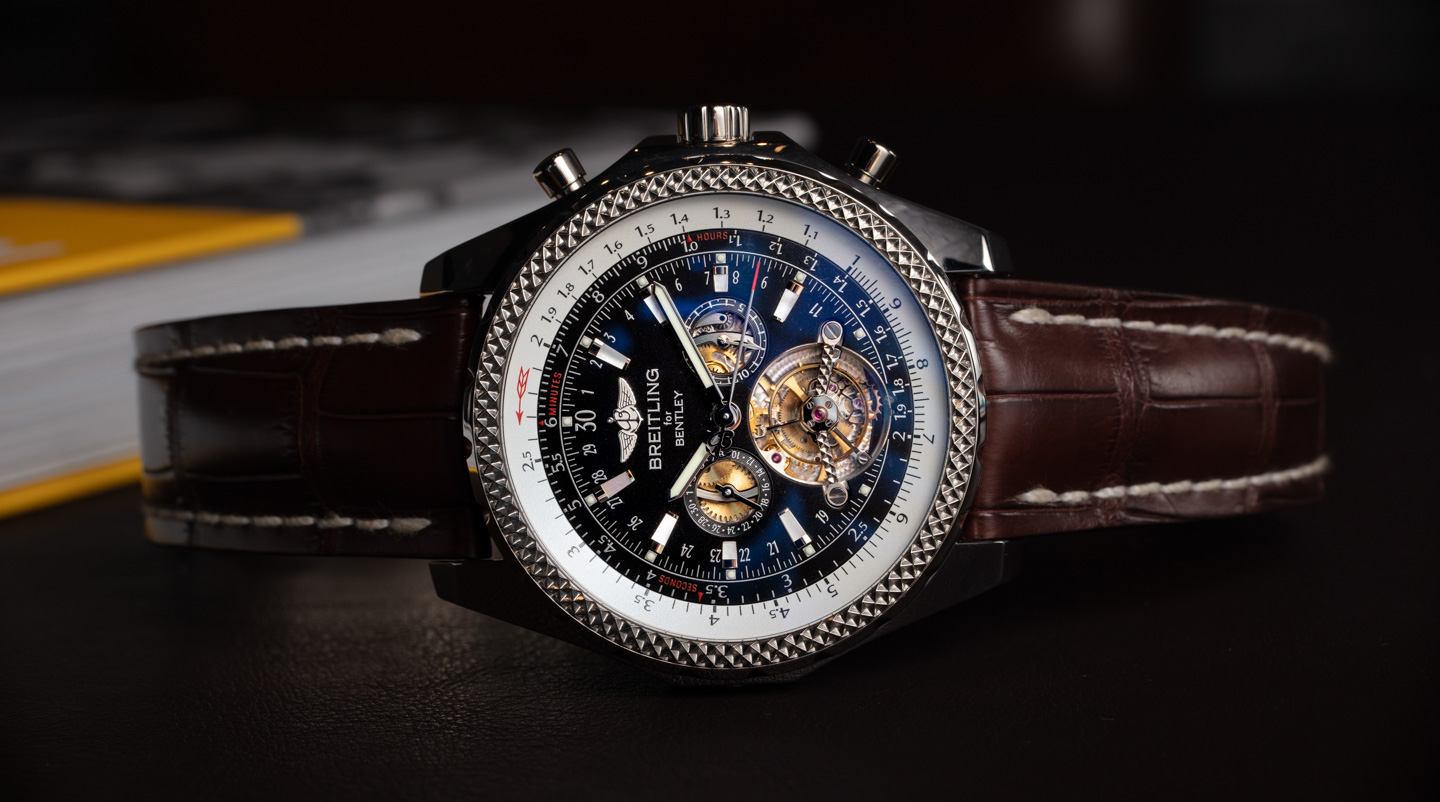 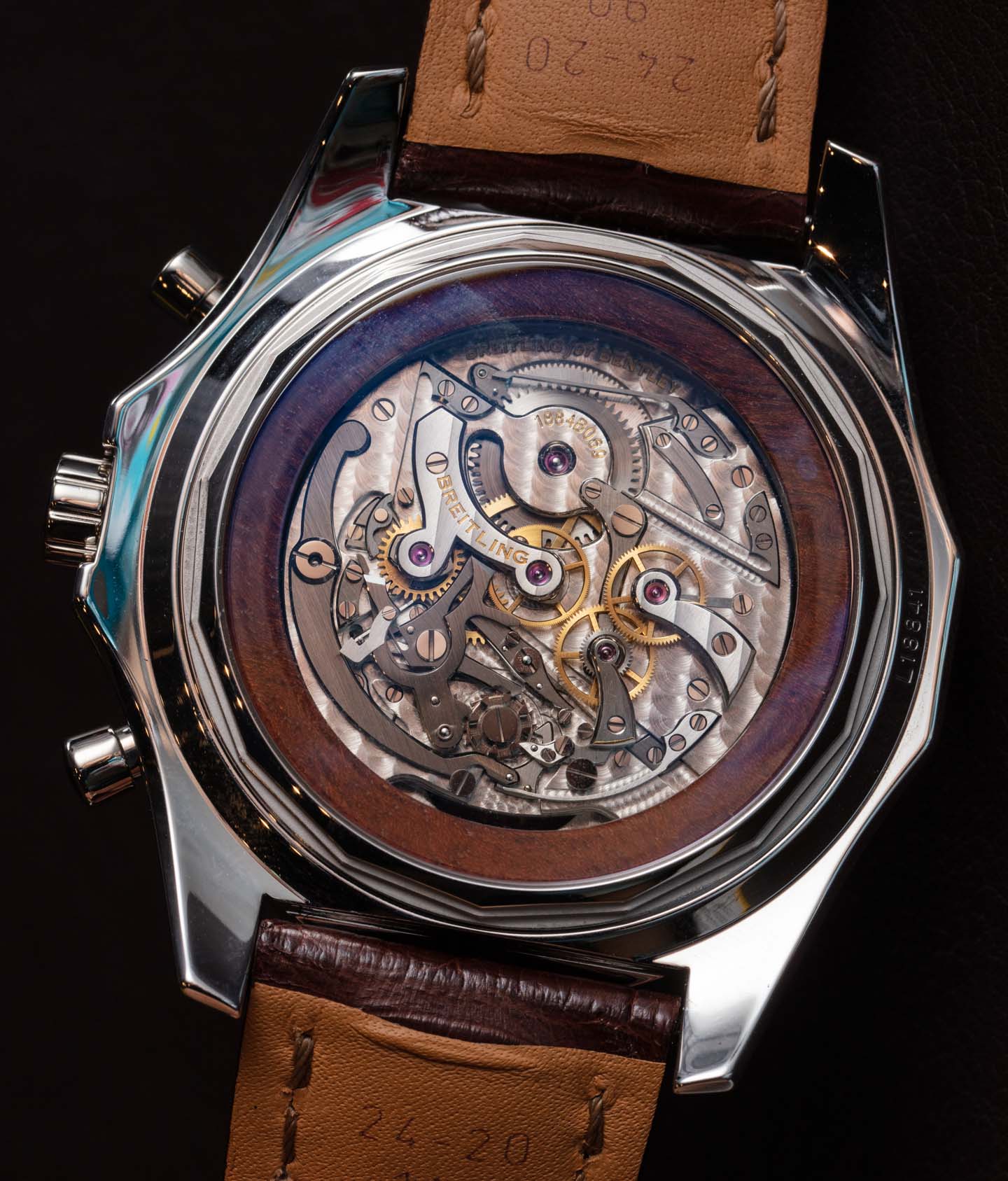 The Breitling for Bentley Mulliner Tourbillon Chronograph is the 18841 collection within Breitling, and the versions are further separated into subname such as the K18841 in 18k yellow gold, and the L18841 collection in 18k white gold (also the K18841, H18841, and J18841). Breitling can make the watches with all forms of gold cases as well as platinum. Both black and white dials are available, with a series of crocodile strap options. Some of the little details are incredible, such as the use of cut mother of pearl for the hour markers, and the ability to match the  bezel texture on the tourbillon bridges. Additional decorative details include the ring of real wood (multiple veneers are available) around the periphery of the movement as seen through the back of the watch. I also like the uncommonly well-finished movement that is decorated to pretty high standards.

The movement is known as the Breilting caliber 18B. It is not produced by Breitling, but likely nearby to them in one of the traditional hearts of Swiss watchmaking. The movement is very classic in form and elegant in decoration and execution. While not technically innovative, the movement is about attractiveness in form and combining a tourbillon and a chronograph in a single manually wound movement. The movement also has a date dial. The chronograph also only goes for 15 minutes. This is a rather uncommon dial layout, which helps add rarity and quirkiness to this timepiece model. Perhaps the quirkiest part of the chronograph is that the second hand moves once around the dial each 30 seconds, as opposed to each 60 seconds. This gives the dial a unique set of markers around the periphery. The idea was to help read fractions of a second (1/6 of a second precision here) better in a 3Hz frequency movement. It is really hard not to love weird, complicated stuff like this. Also rare for a tourbillon movement, the caliber 18B is COSC chronometer-certified (like most other Breitling watches). 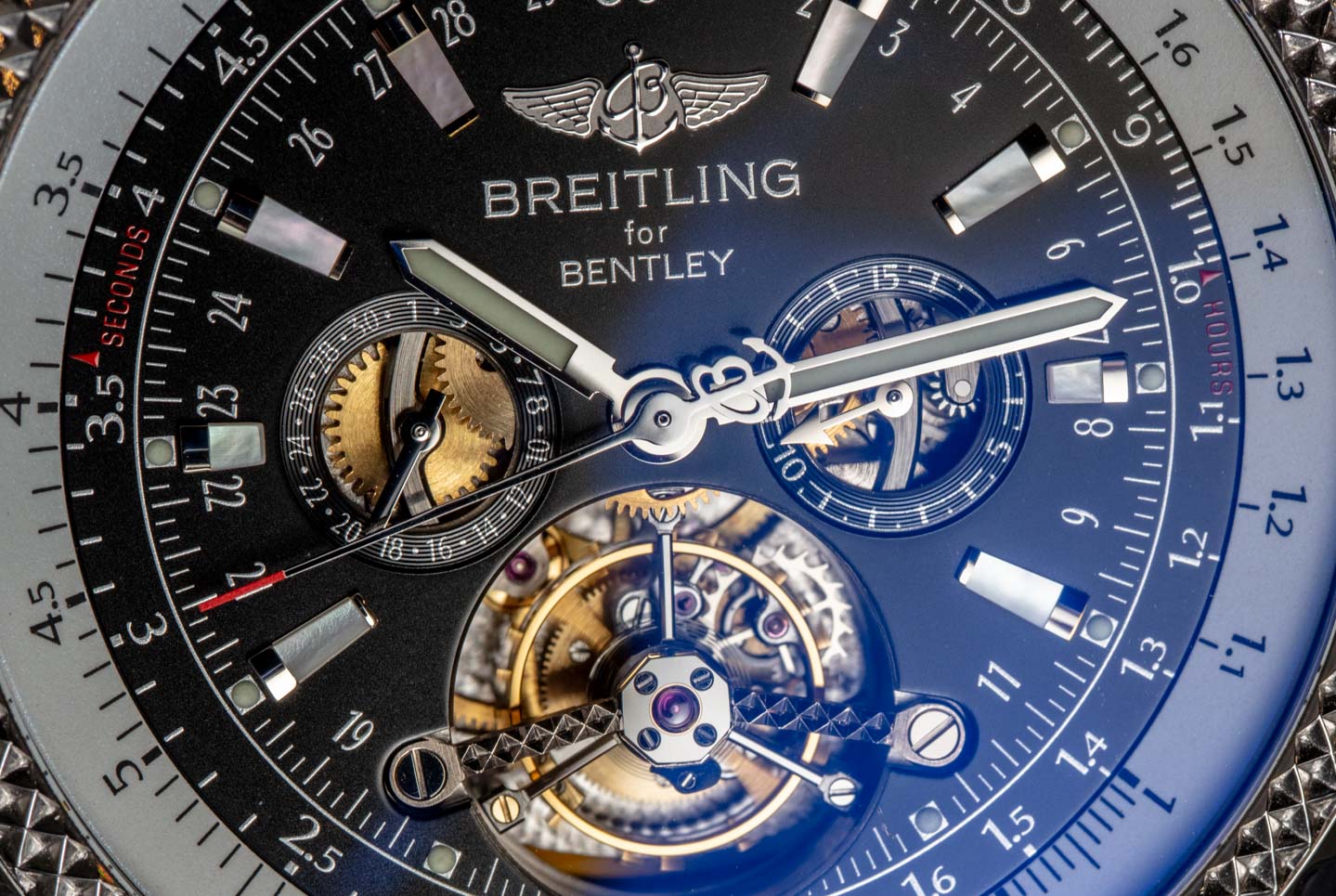 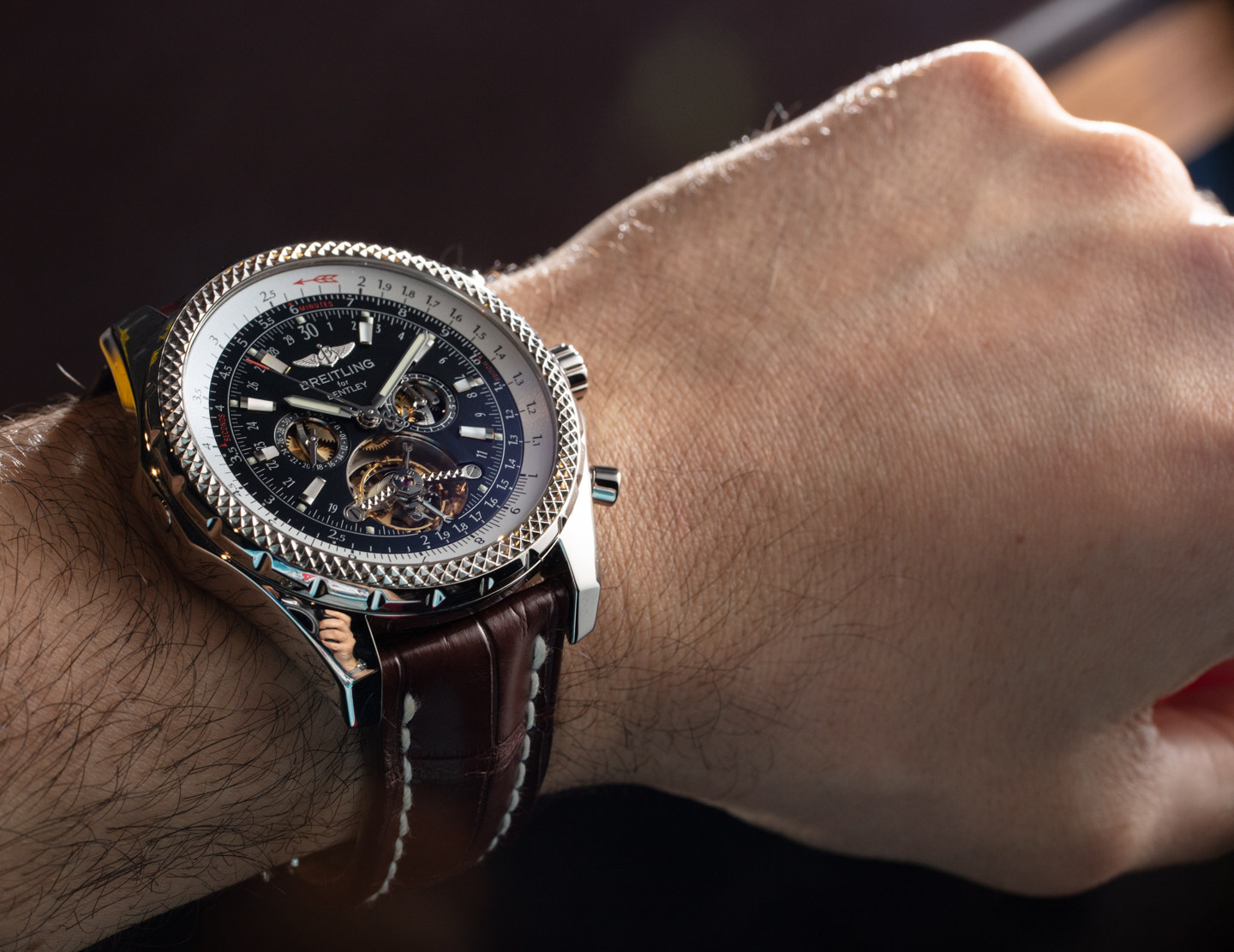 One of my favorite things to do with this particular Breitling for Bentley case design is rotate the bi-directional bezel. Unlike ratcheting bezels, this one is geared. People who operate geared things like certain tripod heads or particular camera equipment will understand the sensation. It offers a real level of resistance to make sure you can turn it precisely, as well as a smooth consistent motion as you turn it in either direction. Geared knobs and wheels such as this are for stable, precise movements. The watch wears large given its size, but it is actually a bit sporty with the case which has 100 meters of water resistance. You can see part of the gearing system of the bezel on the side of the case, which also has an inset corrector to adjust the date on the dial.