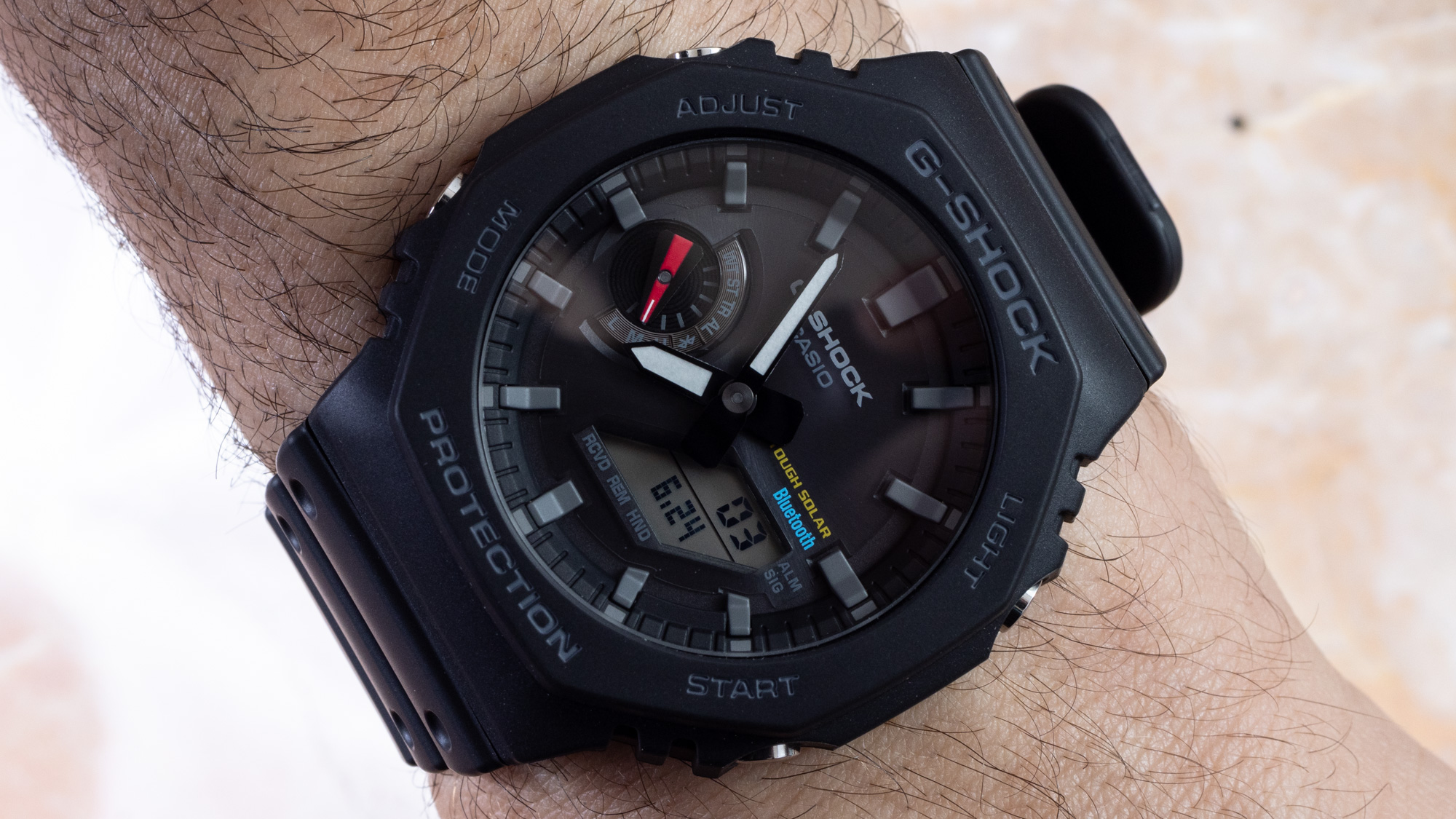 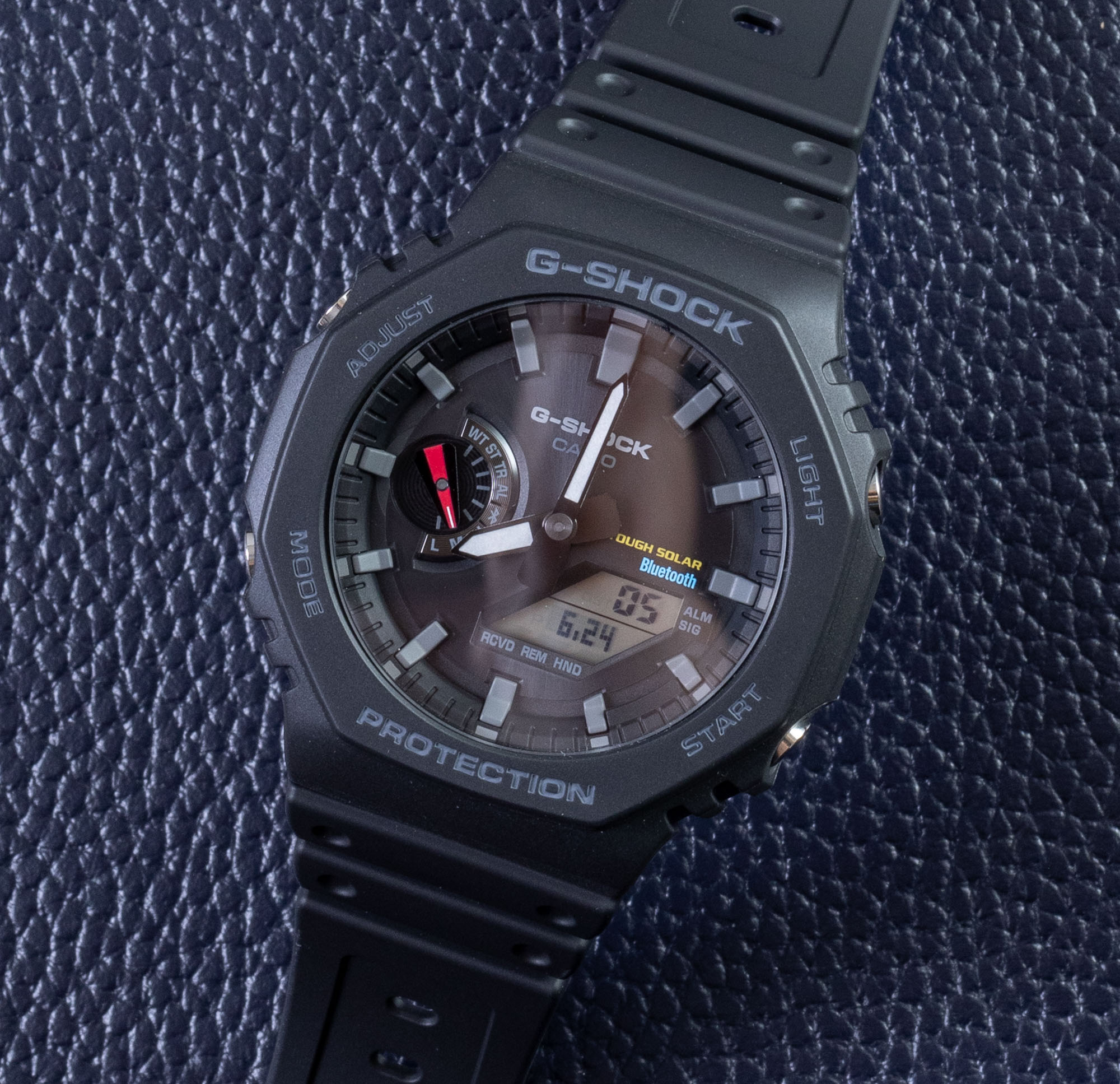 At Casio, 2021 was the year of the “Casi-Oak,” or rather the various products surrounding the new, core-collection GA2100 case design. In about a year, Casio introduced a slew of resin and metal-cased watches featuring a new eight-sided case design that was both trendy and handsome. I wrote an aBlogtoWatch hands-on look at the Casio G-Shock GA2100 watch here. While everybody seems to like the affordability and style of the G-Shock GA2100 product collection, timepiece enthusiasts collectively asked Casio to introduce two additional pieces of functionality to the popular new model family: solar charging for the quartz movement and Bluetooth connectivity between the watch and your smartphone. With the introduction of the G-Shock GAB2100 (on aBlogtoWatch here), Casio hasn’t taken very long at all to answer those wishes.

For just $30 more than the retail price of the still-prevalent GA2100, buyers can have more or less the same watch with a Casio Tough Solar movement and Bluetooth connectivity in the GAB2100. I actually think it is a remarkable testament to Casio’s ability to listen to the market that such a product was released so soon after the original model, as well as the fact that both the GAB2100 and GA2100 will be produced in various forms. Today, I look at the Casio G-Shock reference GAB2100-1A, which comes in customary G-Shock black with some light color accents on the ana-digi dial. As of now, Casio produces at least four different colorways of the GAB2100, with probably many more to come over the years. 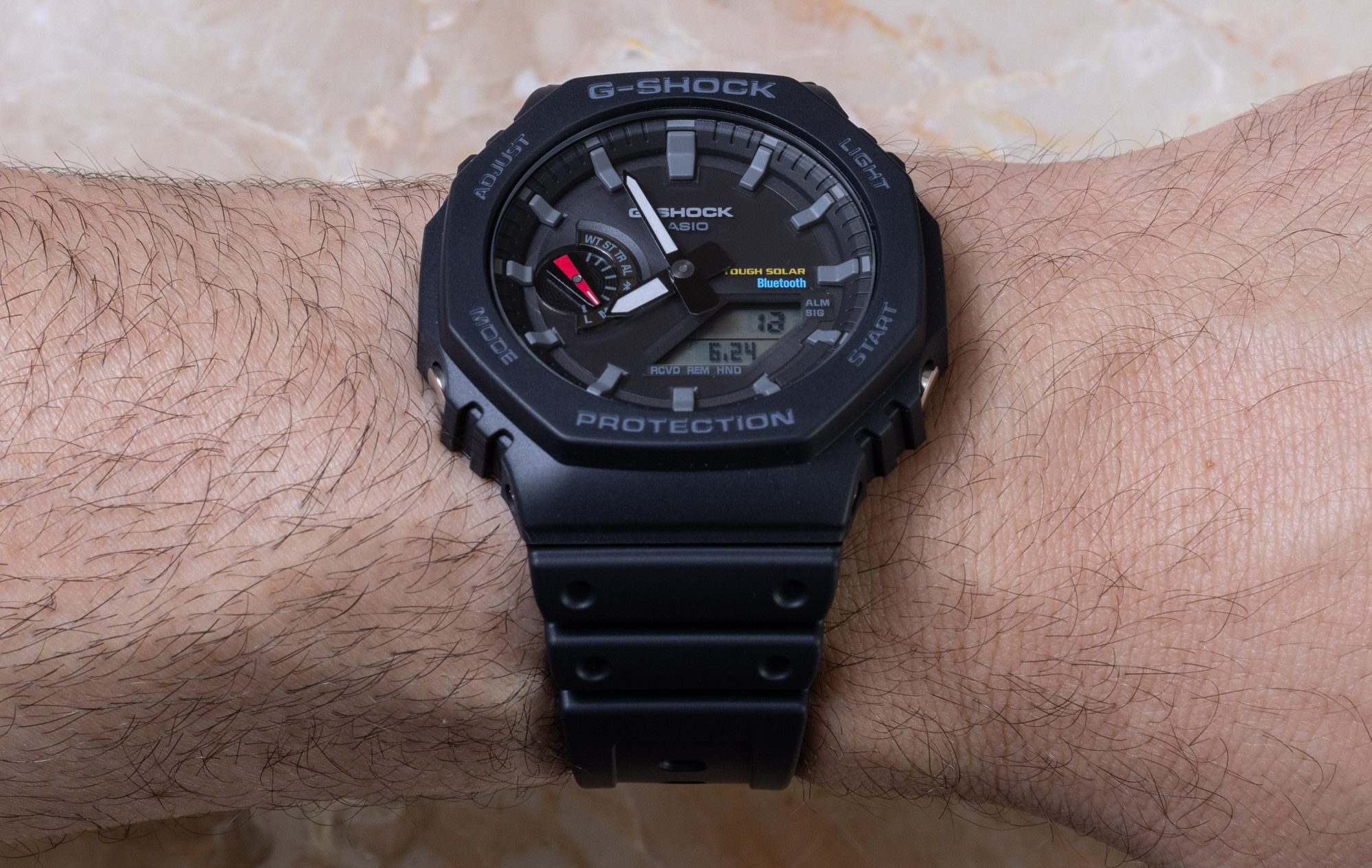 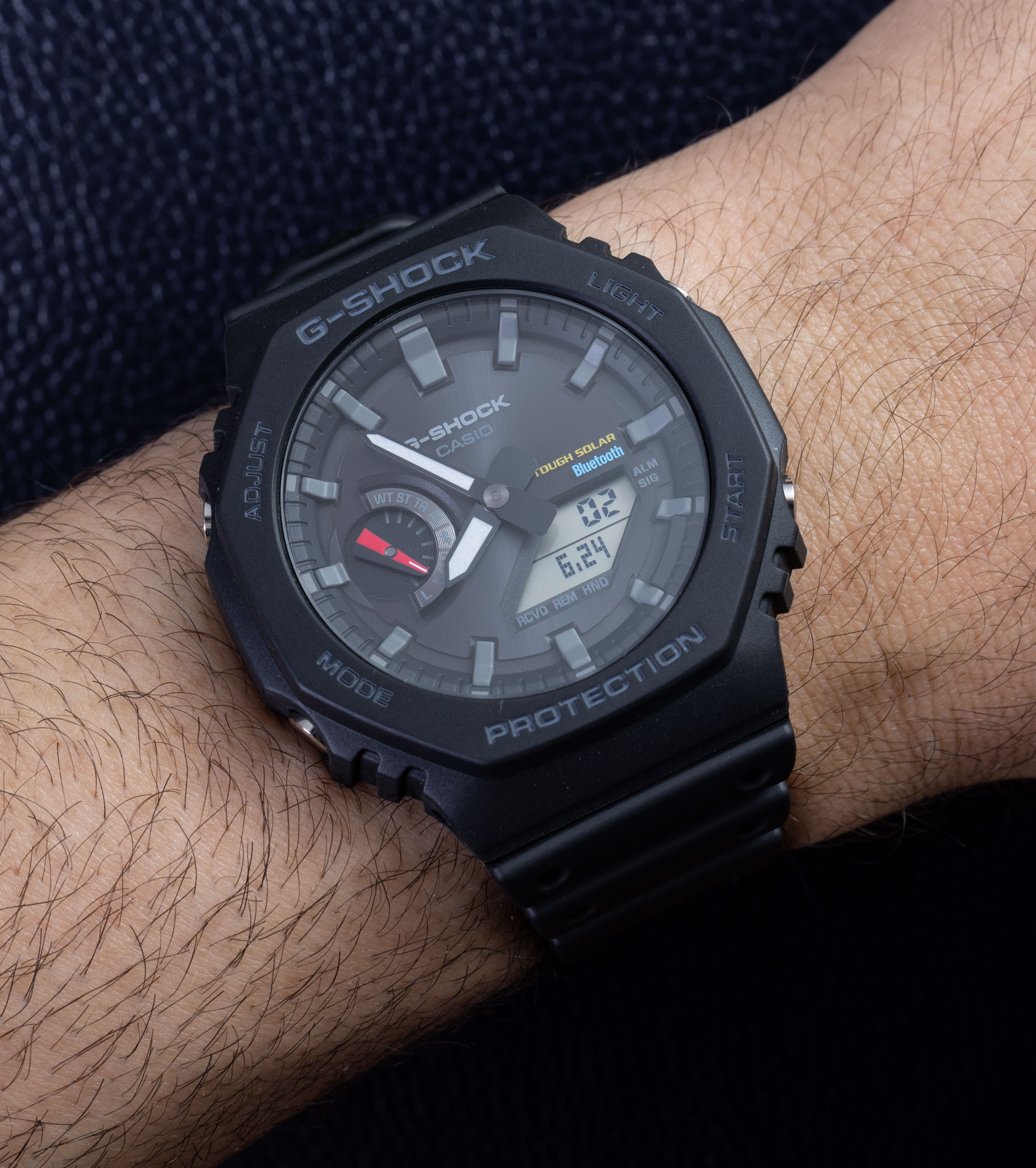 Other than the “Tough Solar,” and “Bluetooth” labels on the dial, there is very little to help you visually identify the difference between the Casio GA2100 and the GAB2100. They are nearly identical in dimensions both being 45.4mm-wide, with a 48.5mm lug-to-lug distance. The GAB2100 is marginally thicker at 11.9mm-thick and perhaps a gram or two more in weight, but I don’t think most people will really notice any differences. The GAB2100 cases are also water-resistant to 200 meters with a mineral crystal over the dial. The cases also use a form of Casio’s new Carbon Core Guard structure which is really about Casio being able to offer high levels of toughness and rigidity in smaller sizes and lighter weights thanks to use of molded carbon versus fewer metals and other materials.

Even though the GA2100 and the GAB2100 are relatively new for the G-Shock family, they are designed with classic appeal in mind including a relatively straightforward dial (by Casio standards at least), high levels of legibility, and a relative focus on elegance and simplicity. These closer to entry-level watches are not brimming with as many features as much of the more high-performance G-Shock models, but they are fun to wear and very versatile. The core GA2100 is so basic that it left out features a lot of enthusiasts — who like the looks of the case — really wanted to have in a G-Shock. The GA2100 is ideal for a mainstream, fashion-focused audience because of its excellent price point, but as I said, Casio found that by adding just a few features, it could make the octagonal bezel case design more appealing for people who demand a more modern Casio G-Shock wearing experience. 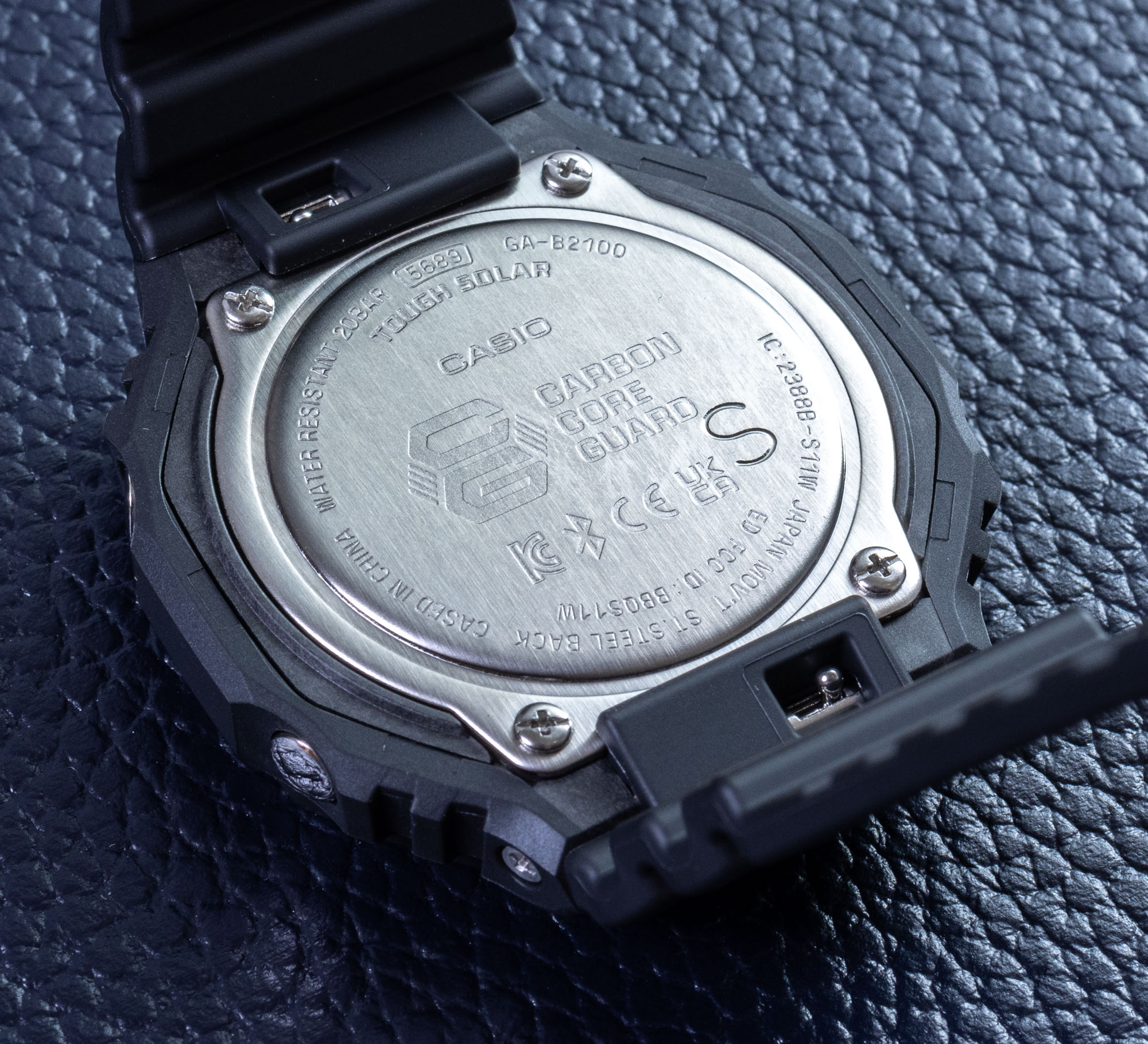 The Tough Solar movement allows the internal battery in the GAB2100 to be charged by light, and eliminates the need for battery changes. Most high-end Casio watches have this but the feature is not as common in the under $200 models. For a lot of people who want the GAB2100 to serve as a reliable “beater watch,” this is a great feature to have, and I very much welcome the Tough Solar technology in this attractive visual product. Next is Bluetooth integration, which allows the watch to communicate with the companion Casio G-Shock smartphone application. Once you download the app and pair the phone to it, you can easily adjust features in the watch, such as the alarm or countdown timer, and also have the watch’s time and calendar information automatically updated by the phone. I personally find this to be very useful as having a proper phone and Casio watch connection allows the watch to always be accurate, especially when you are traveling or changing time zones, which is very convenient.

The GA-B2100 watch dial has legible and lume-painted hour and minute hands, along with a clear ring of applied hour markers. The subsidiary hand serves as a function selection or battery life indicator. The dial also has a small LCD screen that can display various information and by default indicates the date along with a running seconds counter. Overall the dial is legible, functional, and just eccentric enough to be visually interesting and call attention to itself. 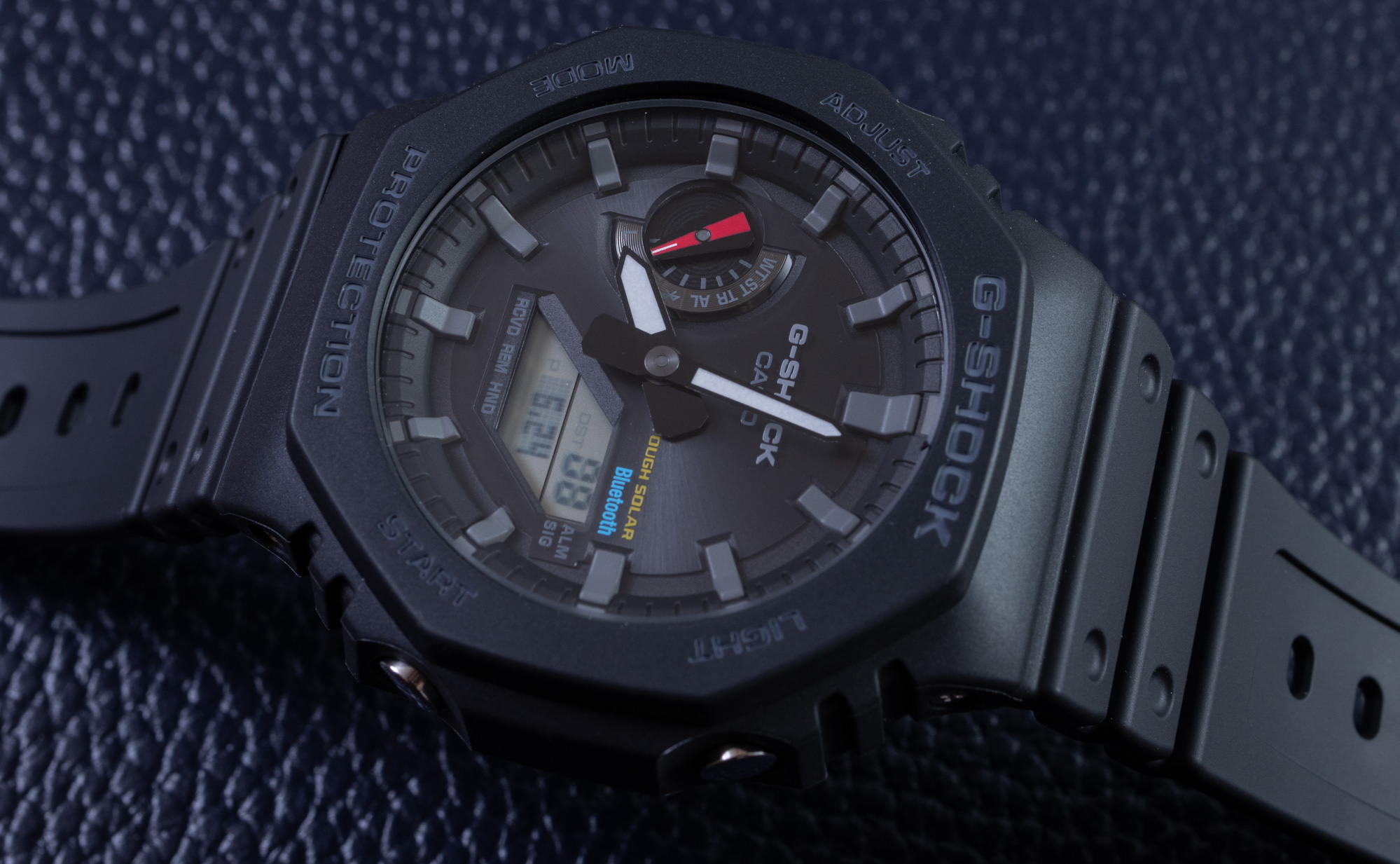 It will be interesting to see what direction Casio takes the G-Shock GAB2100 series in versus the simpler GA2100 from a color and collaboration standpoint. There will probably be fewer GAB2100 watches produced, and they will be targeted toward a more enthusiast base of consumers. For me, the GA2100 case is already a favorite. Now, watch lovers have new reasons to wear Casio’s eight-sided bezel case design with the addition of added convenience technology and value in the GAB2100 models. Price for this Casio G-Shock GAB2100-1A watch is $150 USD. Learn more at the Casio G-Shock website here.