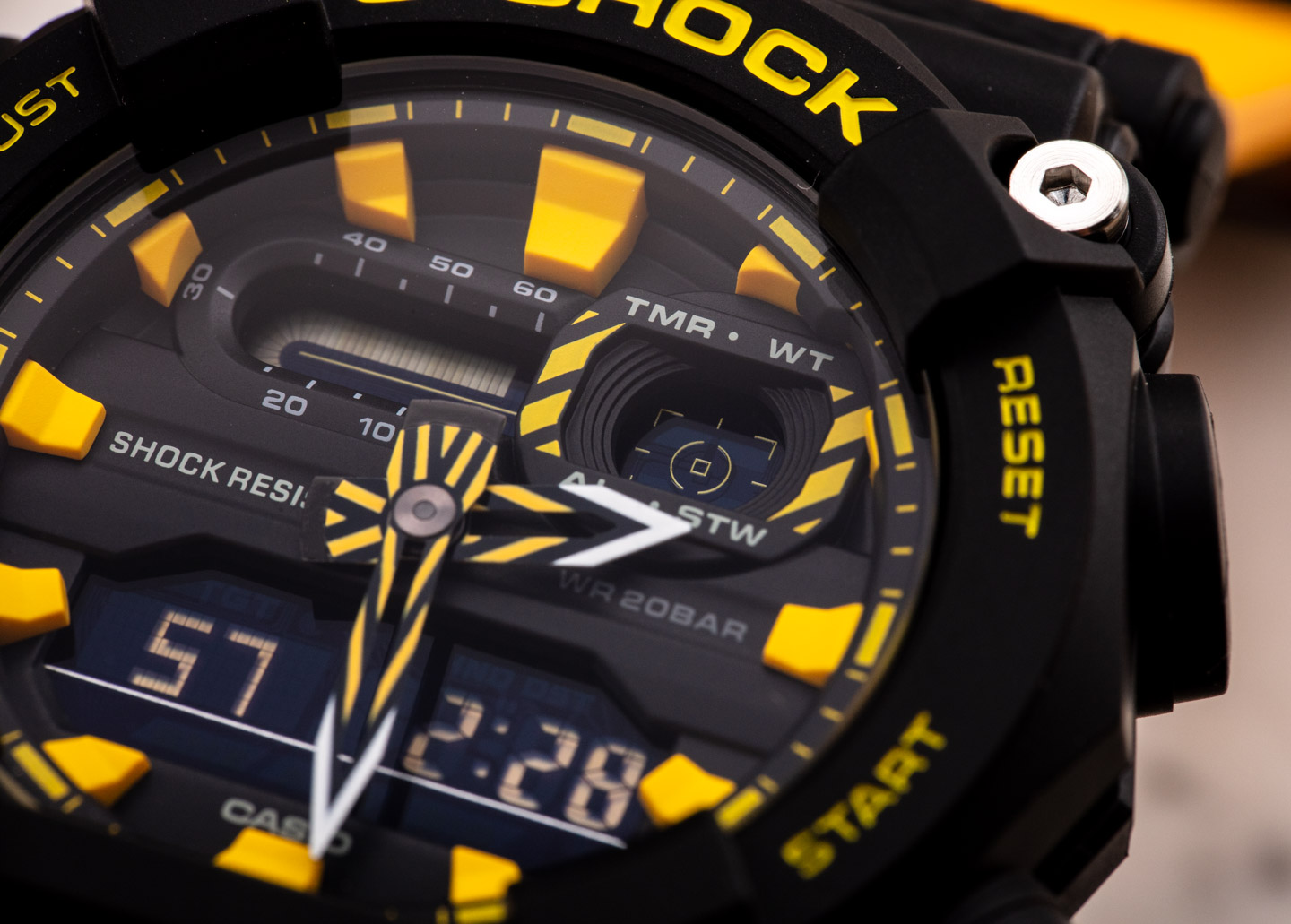 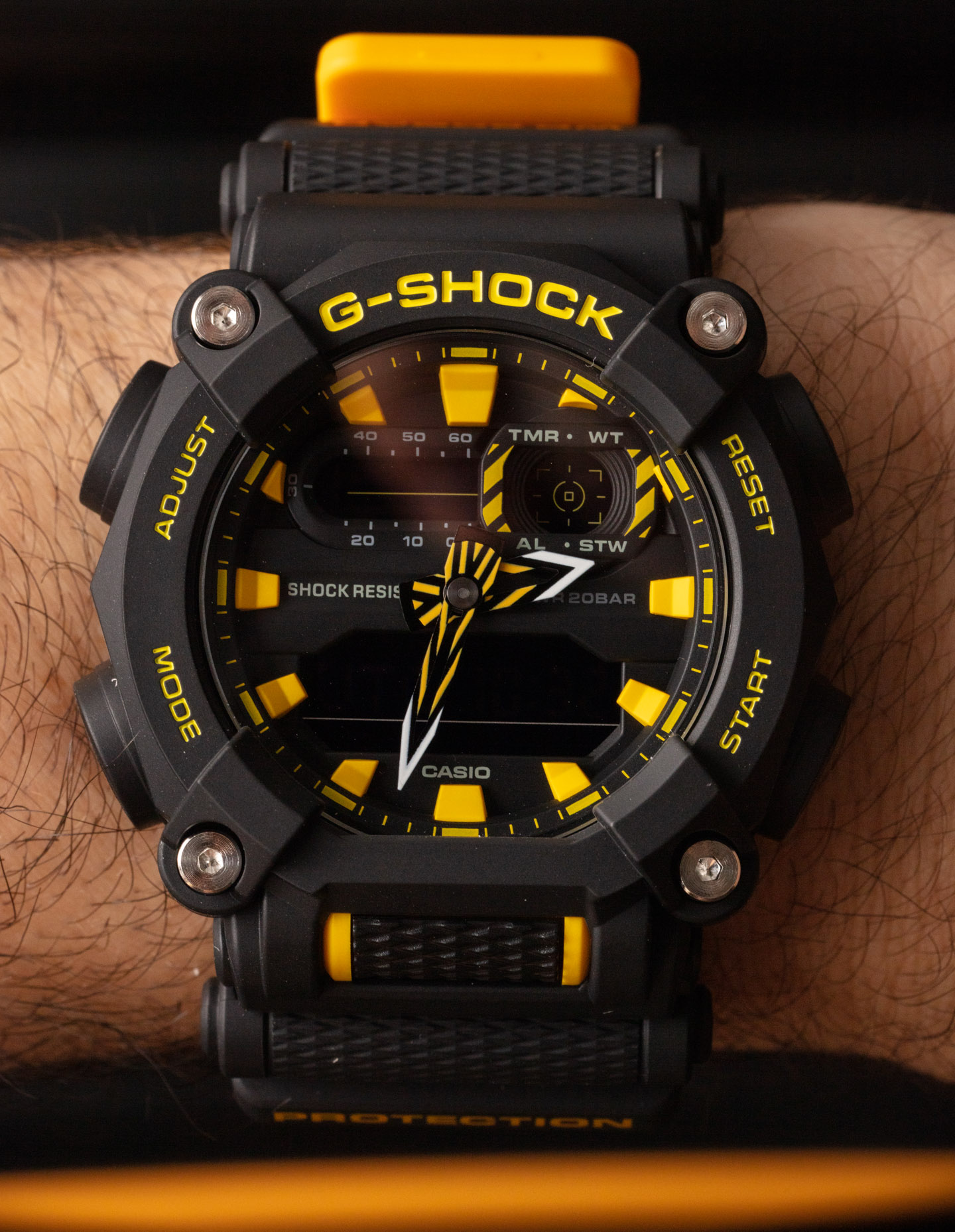 Priced with affordability in mind, but with bold designs and an aggressive stance, the new Casio G-Shock GA900A collection (here as the reference GA900A-1A9) is the Japanese watchmaker’s latest “heavy-duty” watch for the urban fashion market (or anywhere else where durable watches are needed). Given my interest in “black and yellow” watches, I liked this caution tape/construction tractor-style version of the GA900A with its black and yellow striped analog hands.

One “new” feature that you’ll find discreetly tucked on the underside of the GA900A is something that only G-Shock watch fans will probably immediately notice. That is the presence of easy-release spring bars that hold the straps in place. While enthusiasts have been removing stock G-Shock straps for a while and replacing them with something else, this practice isn’t normally promoted by Casio. That appears to be changing. As of this writing, you can’t yet purchase new G-Shock straps from Casio, but the idea of having quick-release bars is so that consumers can do so by themselves in order to change up the look of their watches. Being able to change a strap on a timepiece is an integral part of being a watch lover, and, for the most part, has not been something people can do on G-Shock watches. 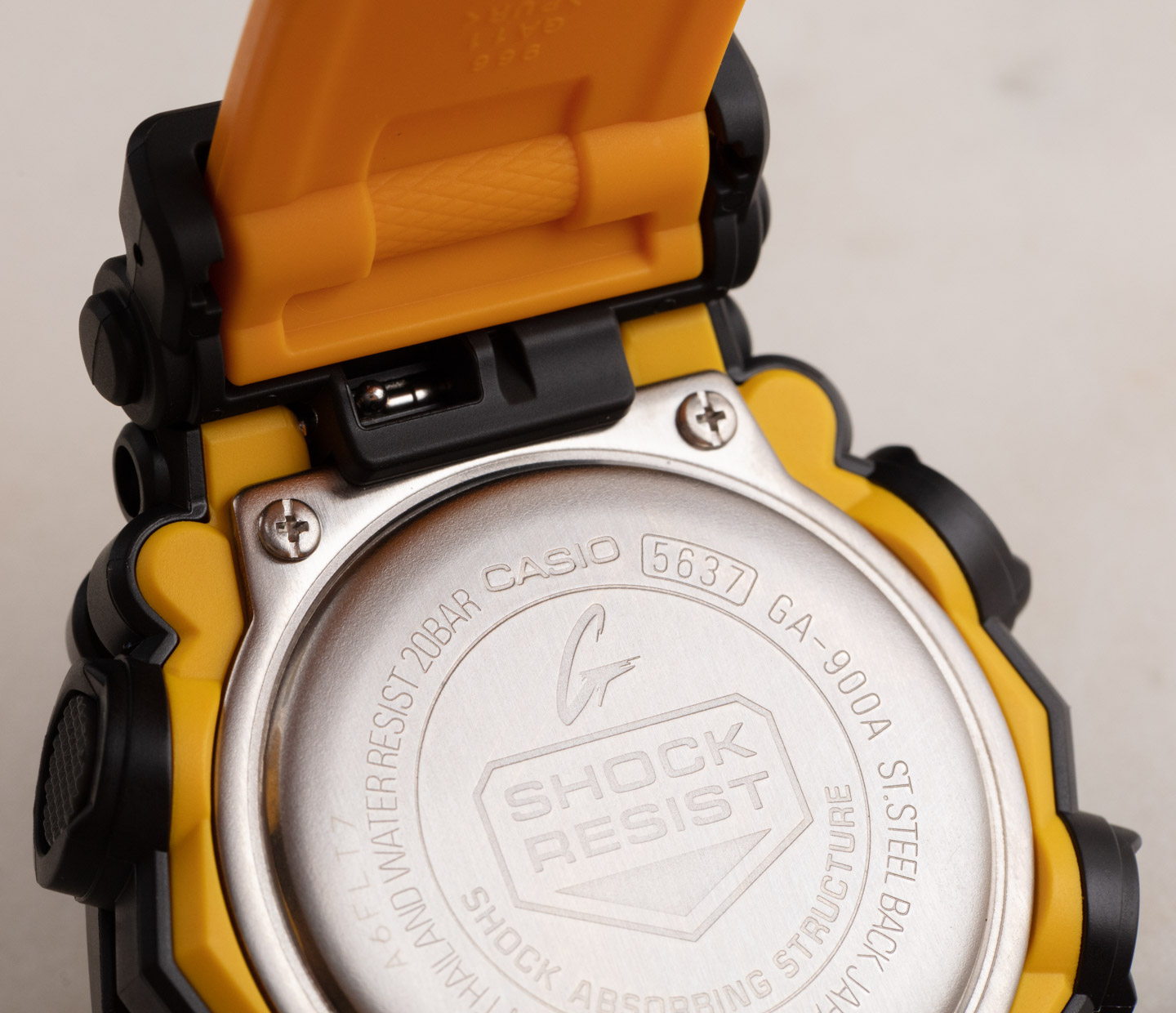 It would also be a mistake to say that these are “tool-less” spring bars because the lever is somewhat buried in protective case material. You will need a tool to remove the straps, but the good news is that the straps can, indeed, be removed. It simply begs the question at this point, “and replaced with what?” Casio will no doubt answer that question in the near future.

Style-wise, the G-Shock GA900A combines a few looks from G-Shock’s recent past and works off of a hybrid analog-digital dial. The hour markers and hands are easy to spot, and there is, of course, a backlight. The three digital screens use a negative display that looks more “cool” but is a bit harder to read (not a big deal). Inside the watch is Casio’s 5637 module movement, and it offers the standard array of basic G-Shock functionality, including calendar, chronograph, timer, alarms, worldtime, etc. The watch case is water-resistant to 200 meters and over the dial is a mineral crystal. 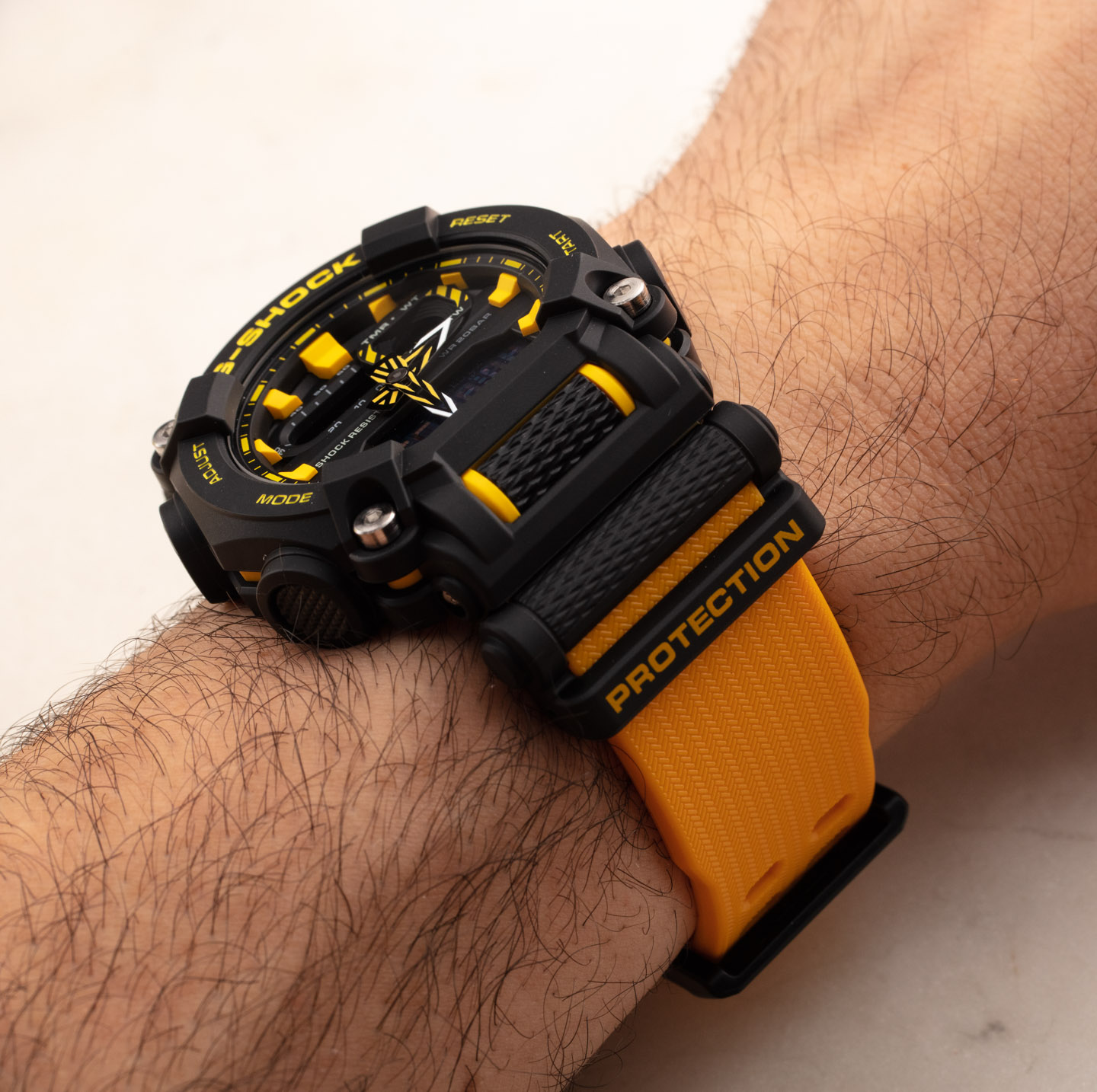 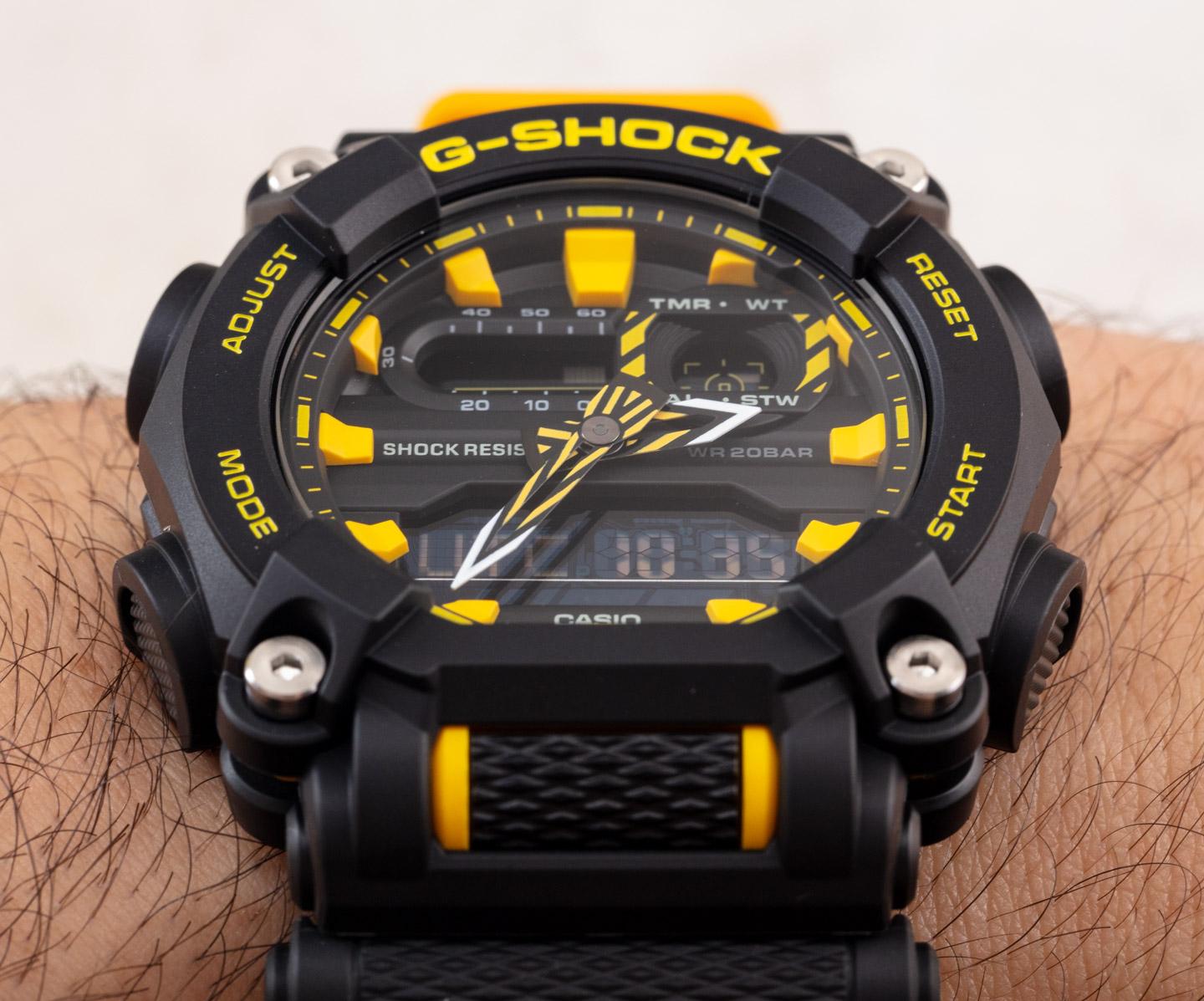 G-Shock is trying to channel the sensation of G-Shock models up to three times the price (or more) of this model in the GA900 (GA900A) for a price that is just over $100. Thus, what you have is a beater/fashion Casio G-Shock watch that doesn’t necessarily have the more retro vibe of many of Casio’s other G-Shock models at this near entry-level price point. More so, in addition to this hip reference GA900A-1A9 in black and yellow, some of the other more colorful versions are the blue-cased G-Shock GA900-2A or the red-cased GA900-4A. I’m still curious how Casio plans to make a business model for new G-Shock straps, but the addition of the quick(er) release straps on the GA900 family is interesting. Price for the Casio G-Shock GA900A-1A9 and the rest of the GA900 watches is $120 USD. Learn more at the Casio G-Shock website here.