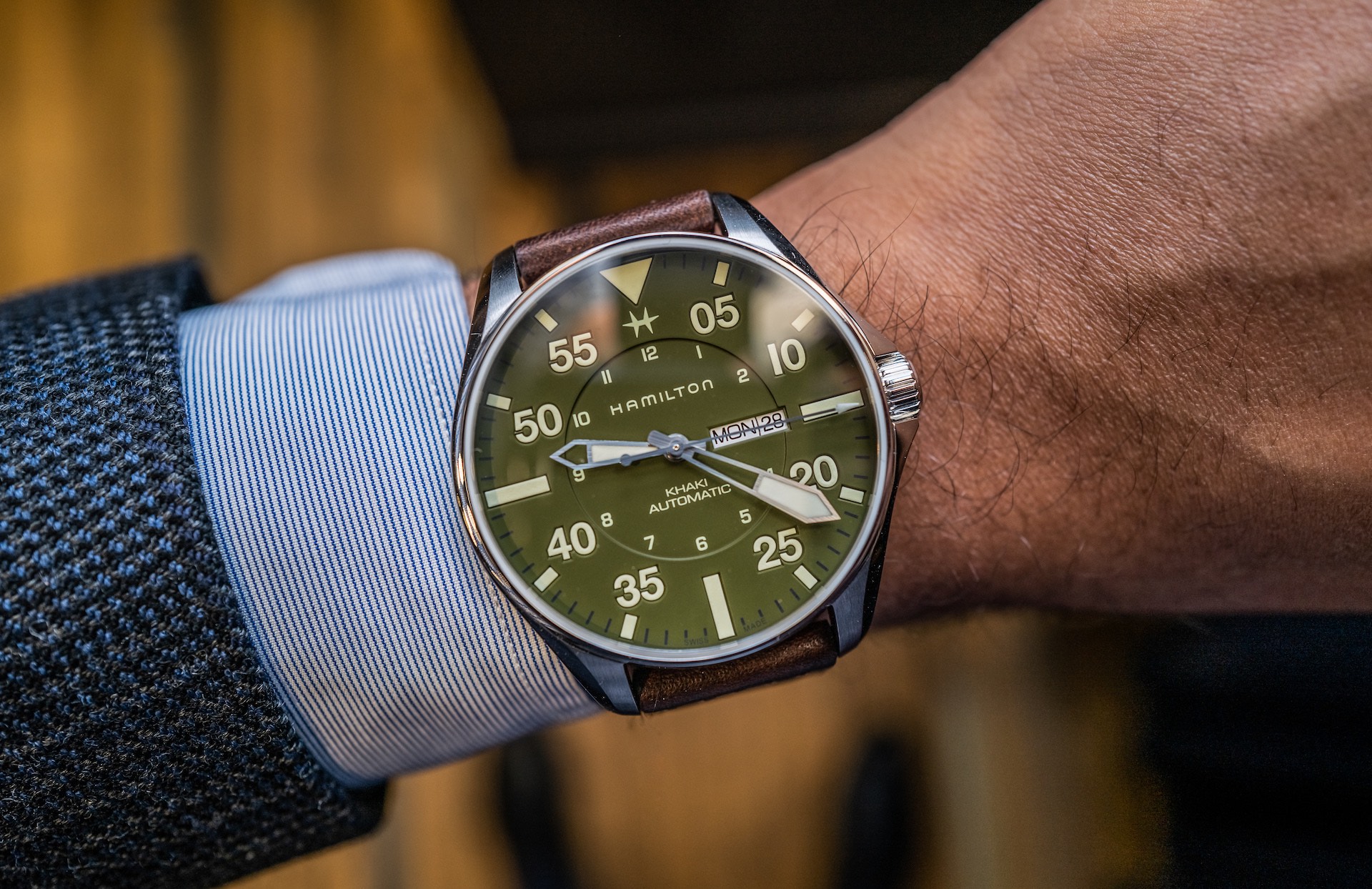 Hamilton watches just released a watch in collaboration with Schott NYC, the iconic American company known for its leather jackets. The Hamilton Khaki Pilot Schott NYC limited edition is a take on the Khaki Pilot Day-Date auto with changes to the dial and, not surprisingly, the leather strap, as well as some special packaging. Yes, it’s a limited edition but with 1,892 pieces being produced, most anyone who is a fan can get their hands on it for a pretty modest $200 premium over the standard version. 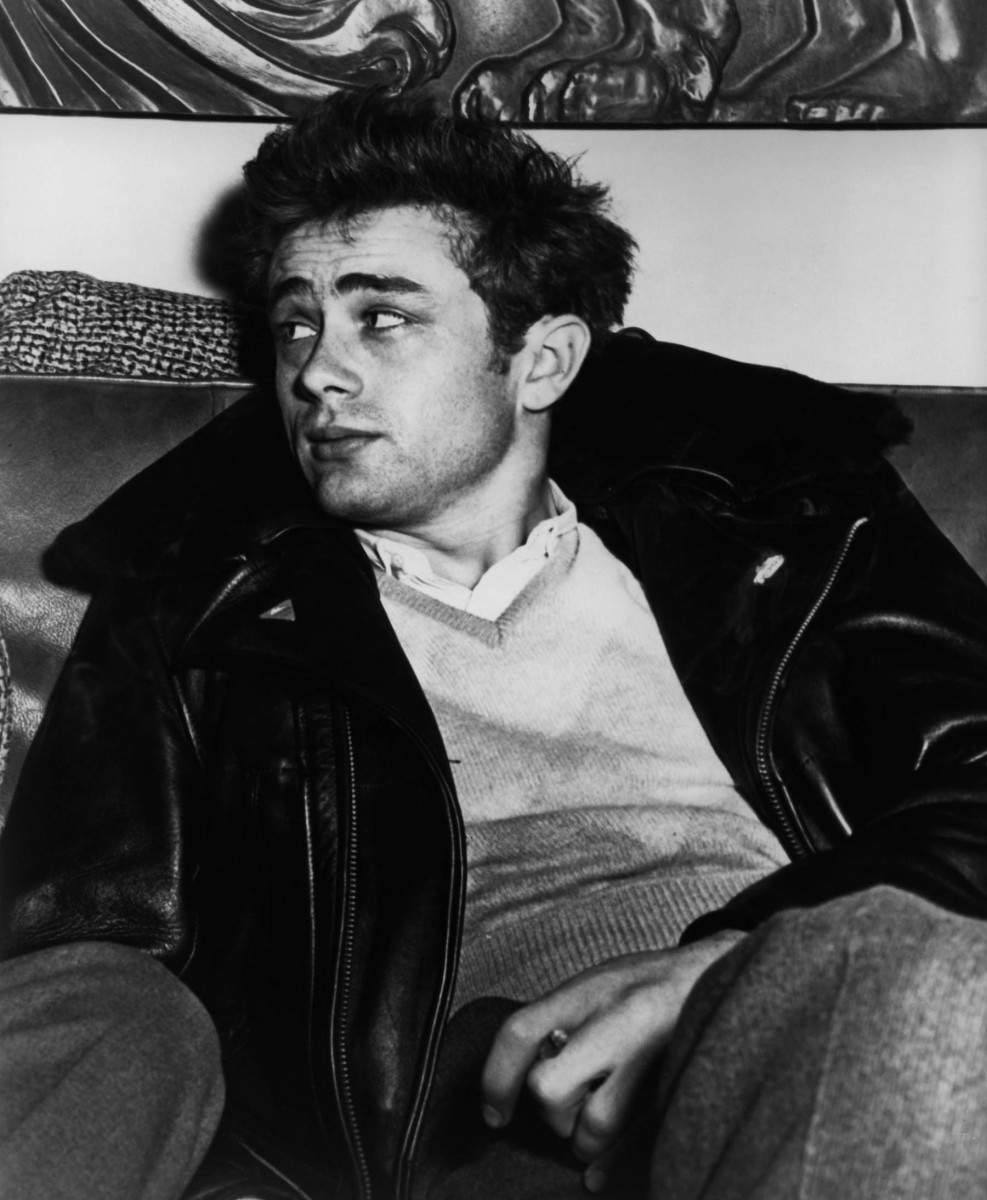 For those unfamiliar with Schott NYC, the American brand has been around since 1913 and really has a storied history. They were the first to put a zipper on a jacket, designed the first leather motorcycle jacket, and produced bomber jackets and pea coats for the U.S. Army and Navy in World War II. For an instantly recognizable cultural milestone, the Schott NYC Perfecto leather jacket was worn by Marlon Brando in The Wild One (1953), and James Dean nearly always had one on. 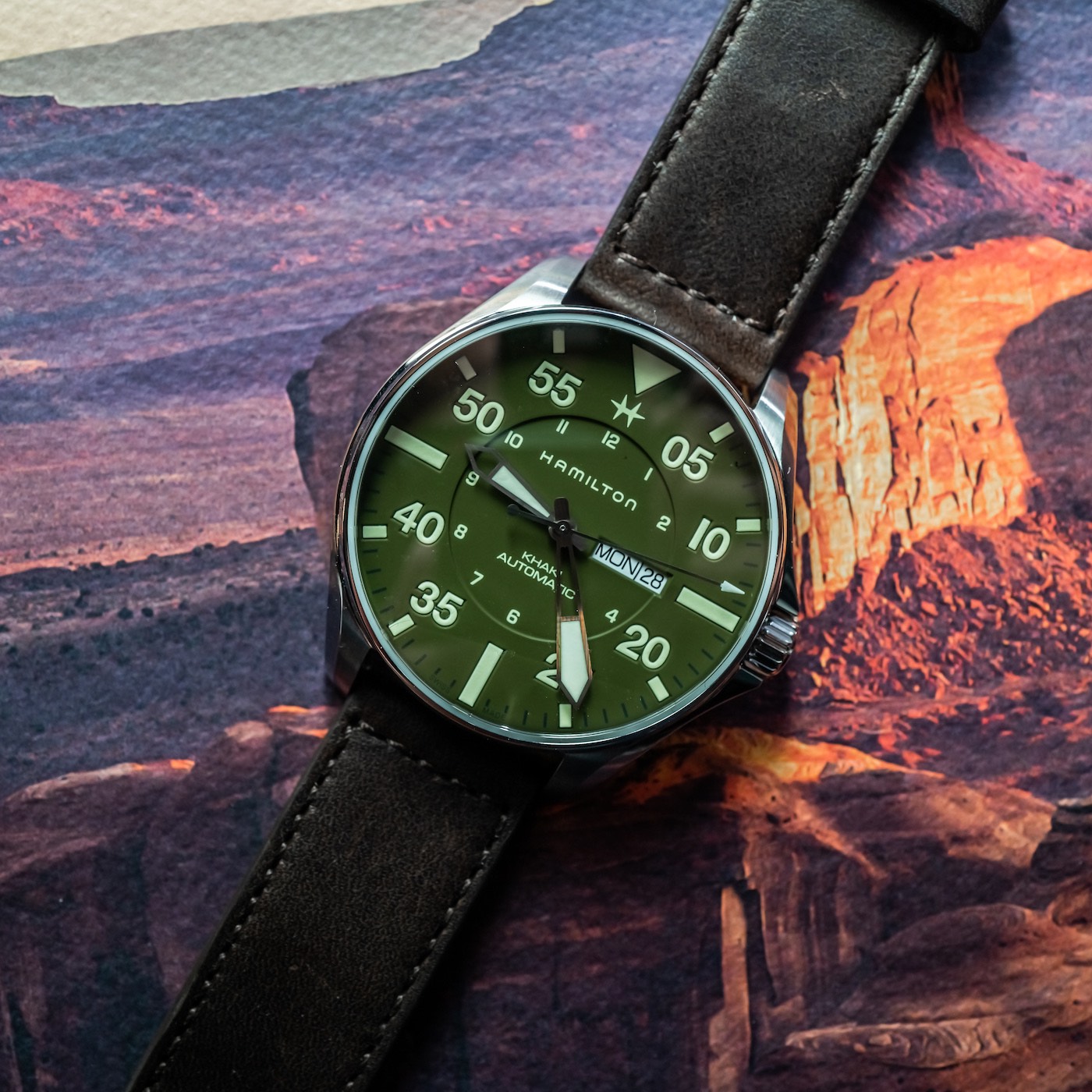 Green is definitely the “it” color right now, but I don’t let a trend get in the way of appreciating a great dial color. The khaki-green dial looks very cool, and the large numerals, indices, and hands are done in a very light green, almost yellowish, tan lume. The result both looks good and is legible, which is really all that matters. The day/date at 3 o’clock is unchanged and will spark the usual discussions and debates, but it’s inarguably useful to have. 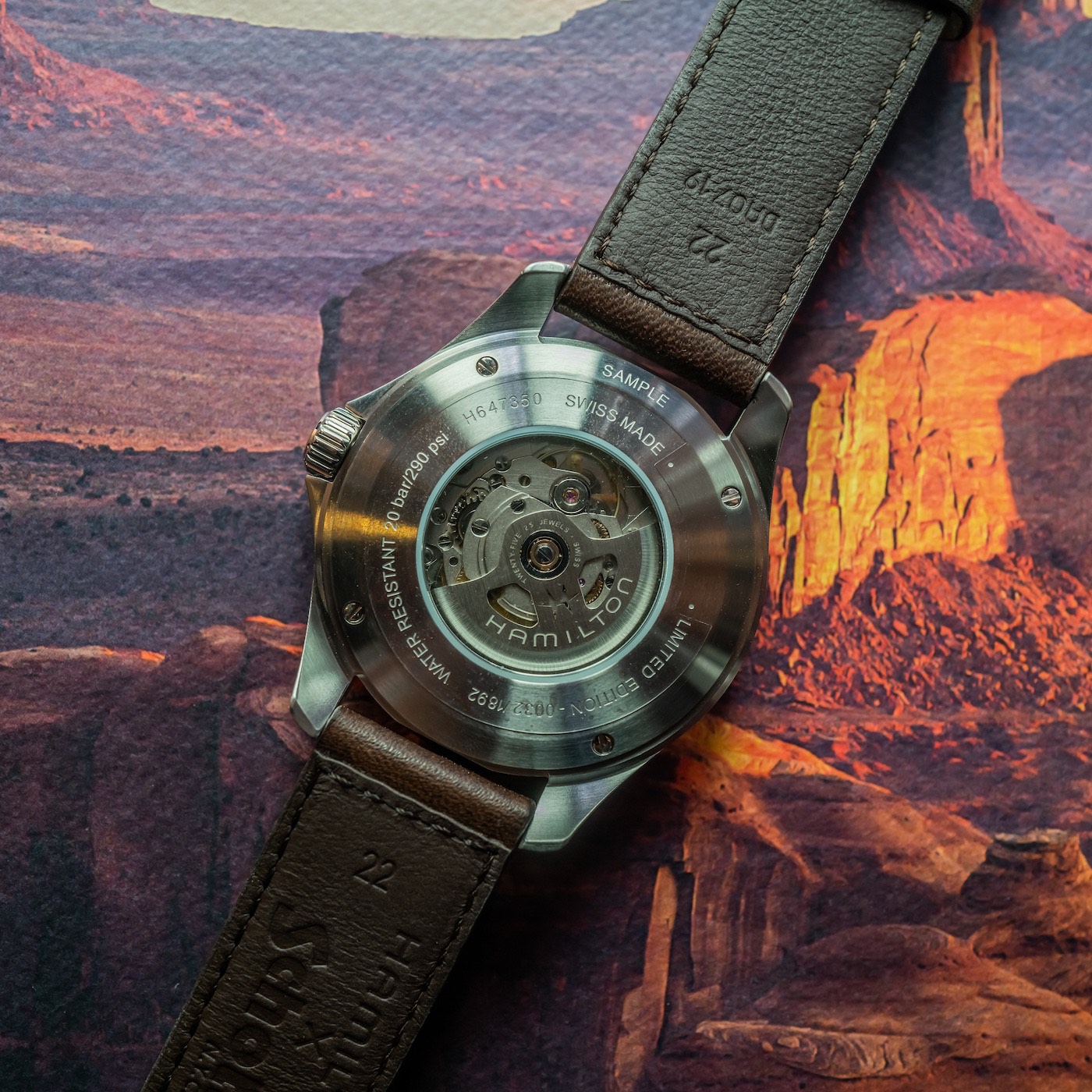 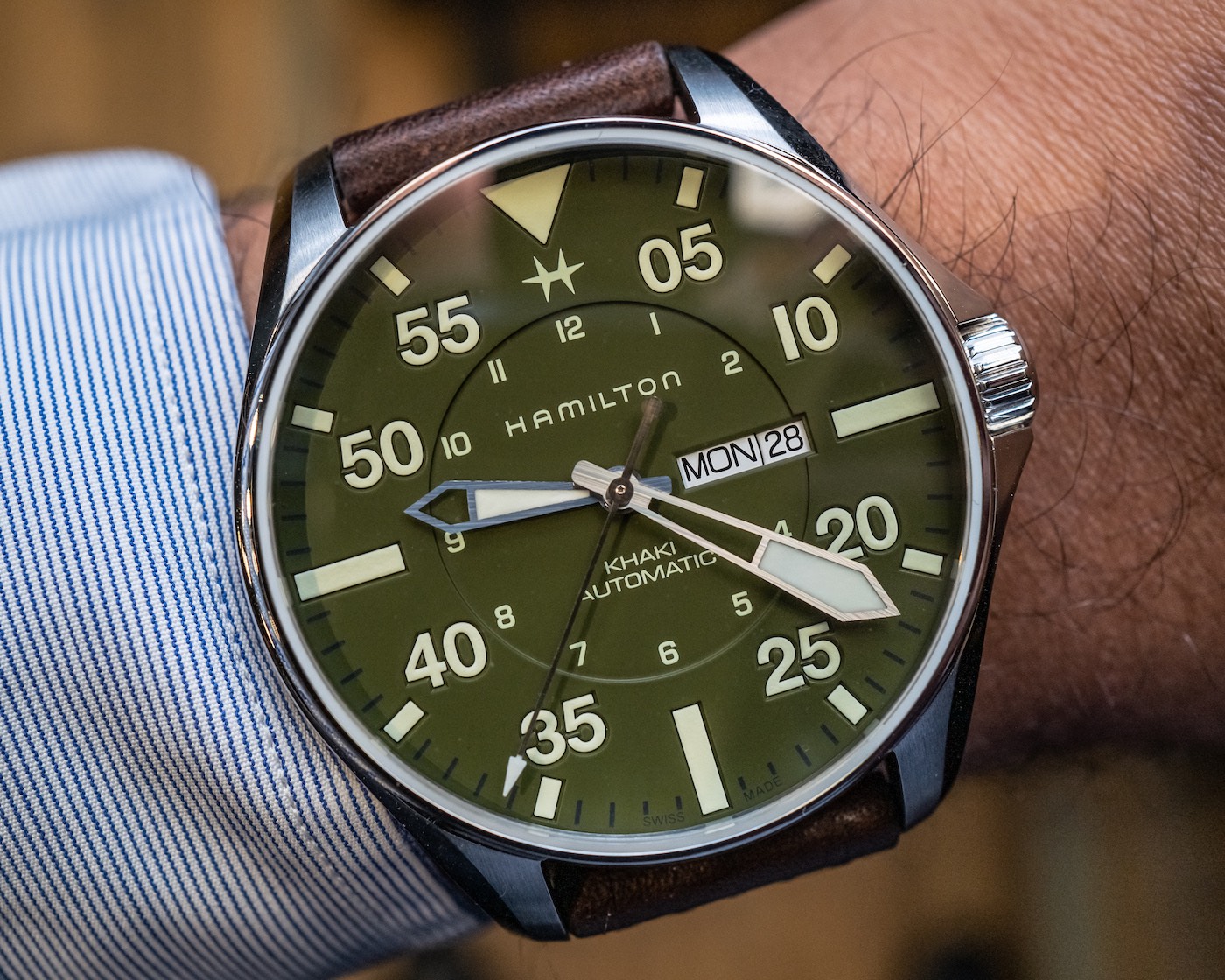 The 46mm-wide case of the Khaki Pilot is on the bigger side, but not really when you consider pilot watches. The real estate is given mostly to the dial, with a very thin bezel that keeps the size under control. The lugs are pretty short, as well, and the lug-to-lug measurement is right around 53mm. At 12.5mm thick, it’s at least thin enough to pop under a sleeve when you need it to. The Hamilton Khaki Pilot Schott NYC is water resistant to 200M.

The movement is still the H-30 automatic day-date, which has an 80-hour power reserve. 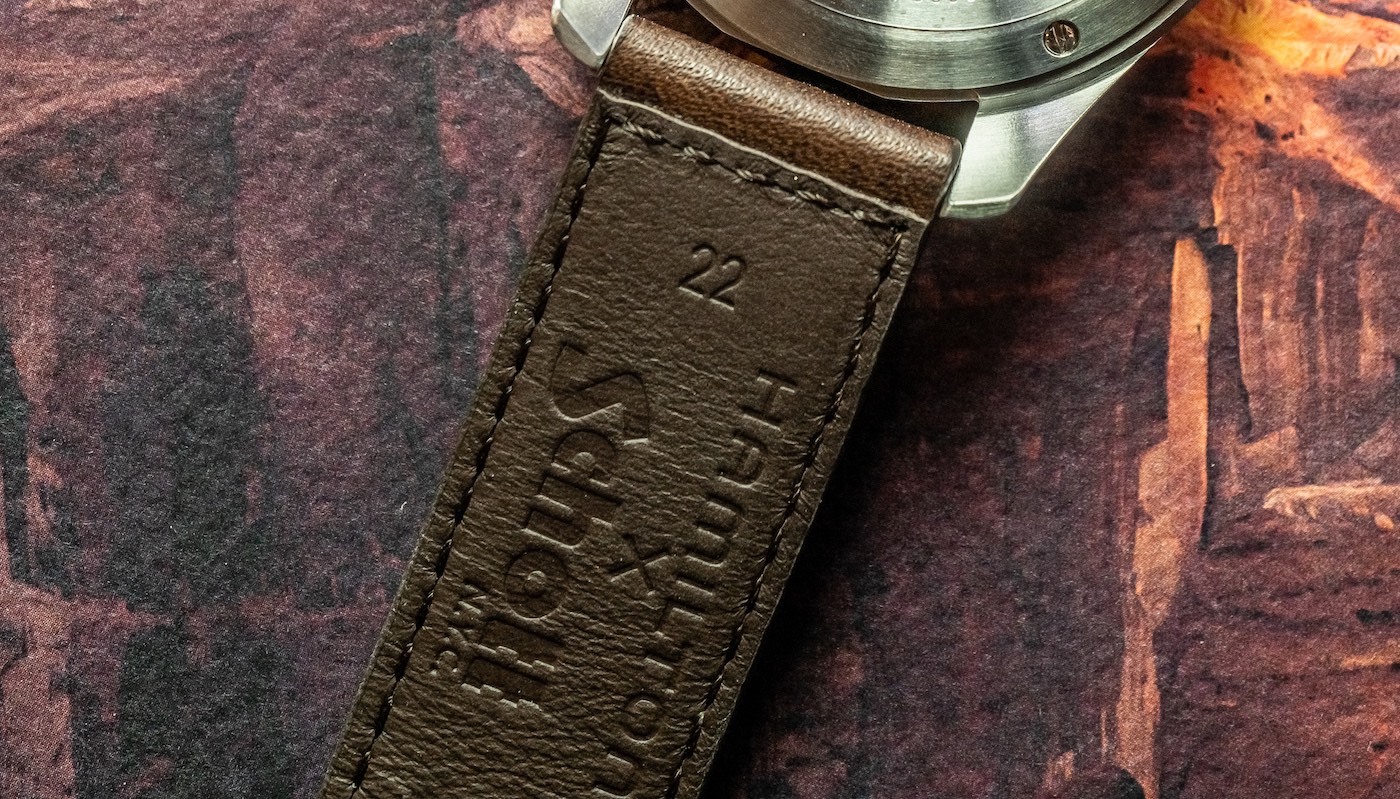 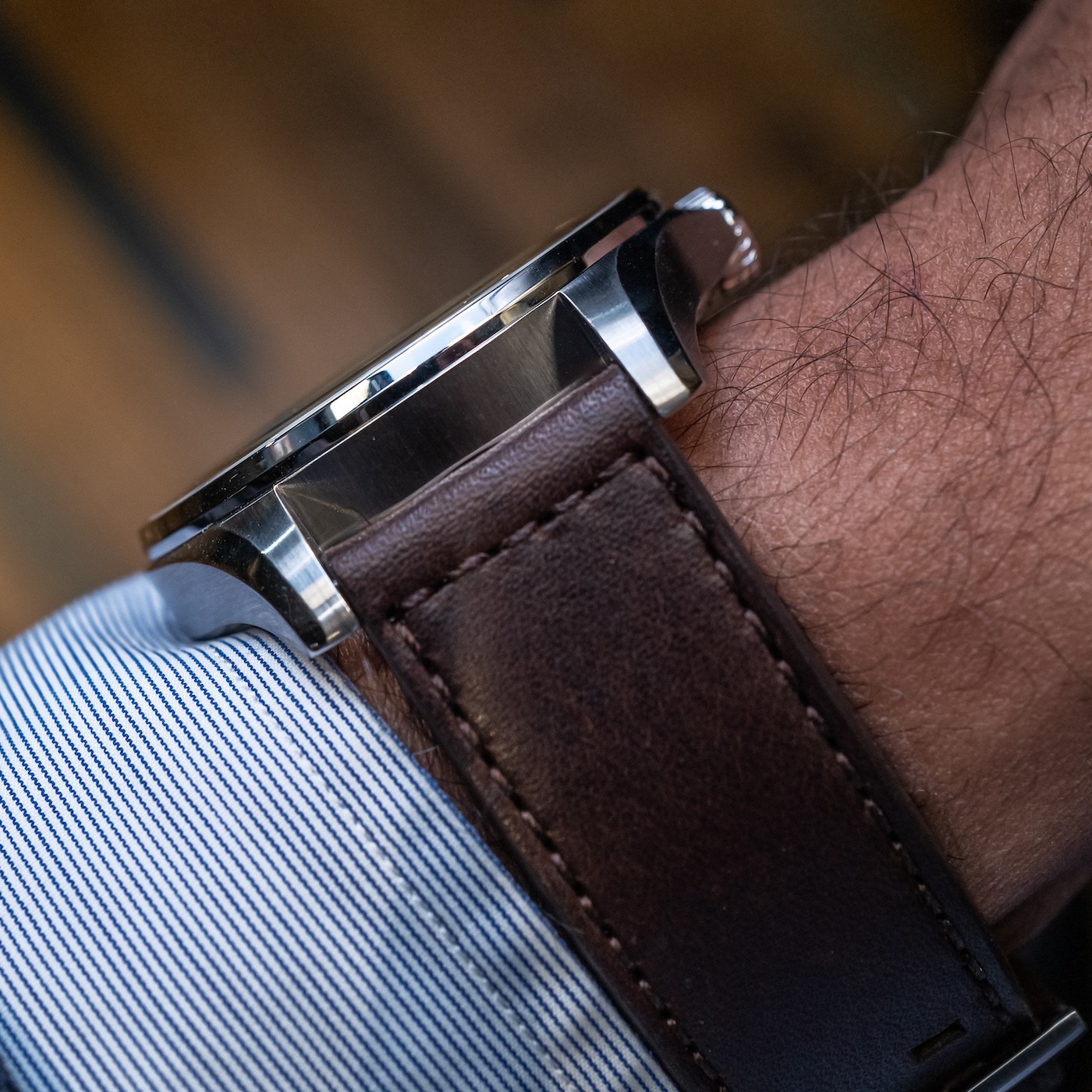 Where Schott NYC comes into play on the watch itself is with the strap. Using the same leather used for jackets from WW II to today, the strap is done in a dark brown (to be specific, it’s Federal Standard military color 30099 Earth brown). The feel of the leather and the stitching really does stand apart from the standard fare. I noticed it’s on the stiffer side, which makes sense when you consider that it softens over time and will gradually shape itself to the wearer’s wrist. 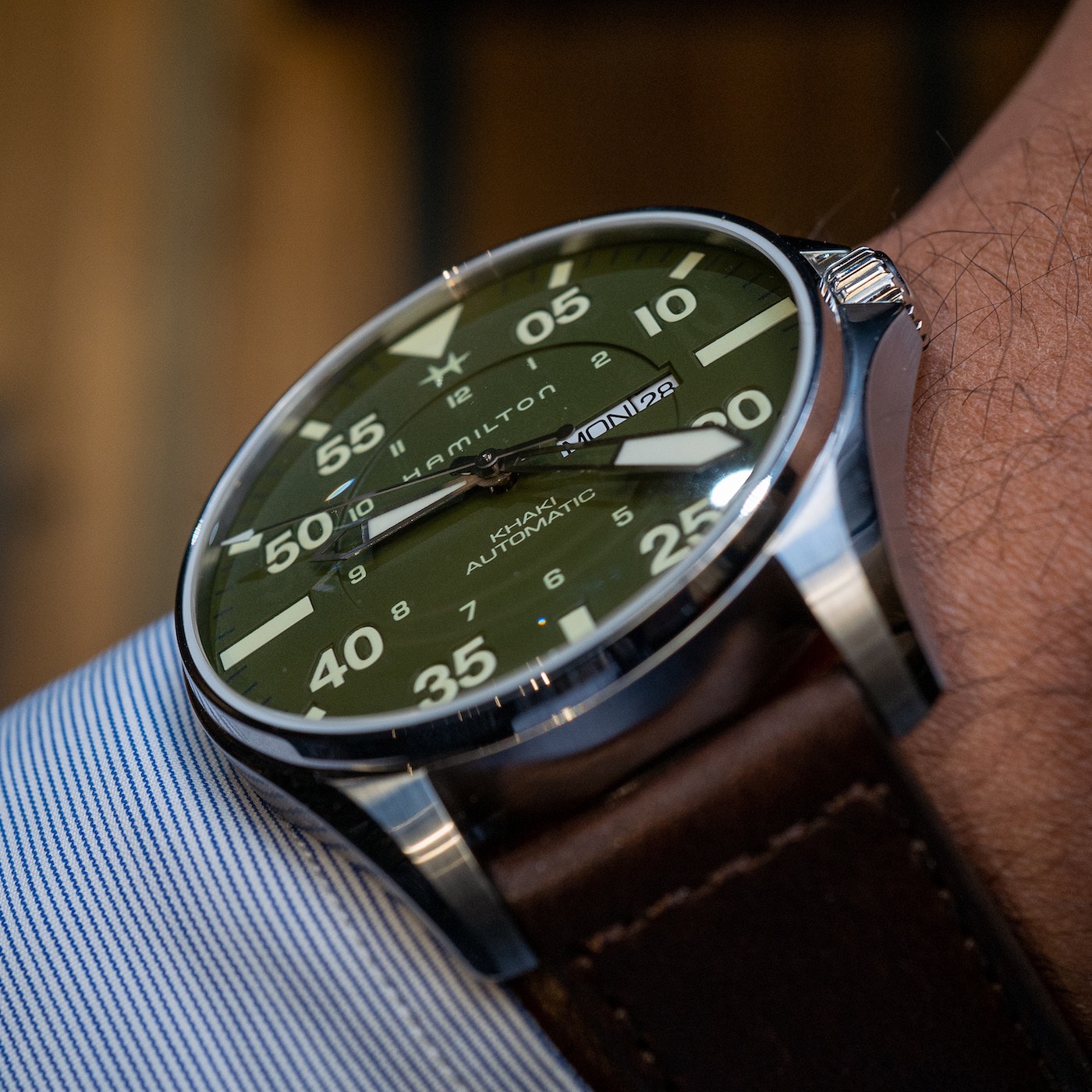 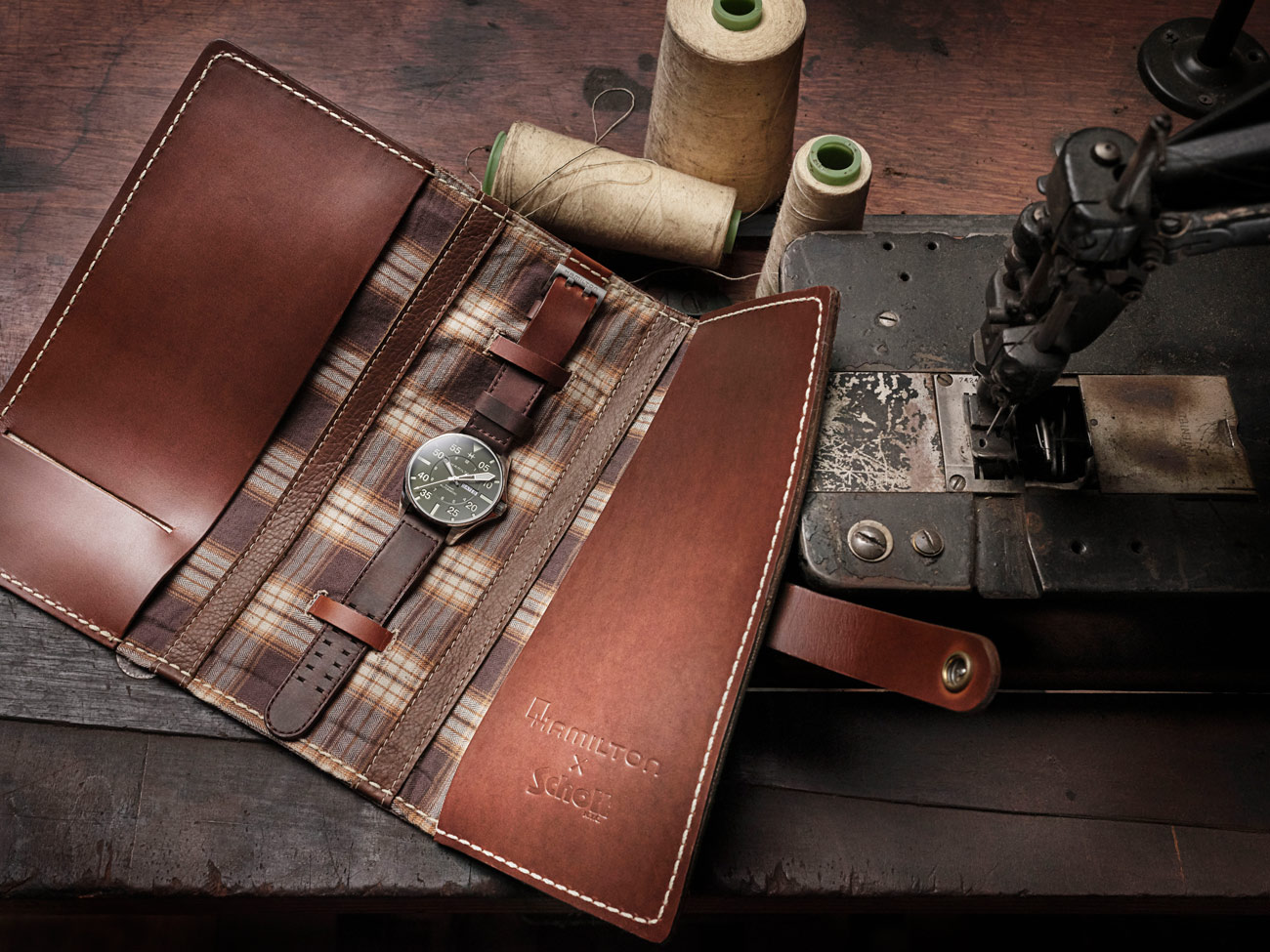 Schott NYC also did the special case for this Hamilton Khaki. It’s a brown leather carrying case  with a plaid cotton interior, side-entry pockets, and a cardholder that’s sewn by hand at the Schott NYC factory located in Union, New Jersey.

While Hamilton is owned by a Swiss company in the Swatch Group, it is always going to have a distinctly American association. (Maybe Elvis has a lot to do with that.) Schott NYC continues to be an American institution with an equally long and fascinating history of its own. As far as brand collaborations go, this is about as natural as they get and, thankfully, the end product is very tastefully done. Again, the Hamilton Khaki Pilot Schott NYC watch will be limited to 1,892 pieces with a price of $1,145. You can learn more at hamiltonwatch.com.