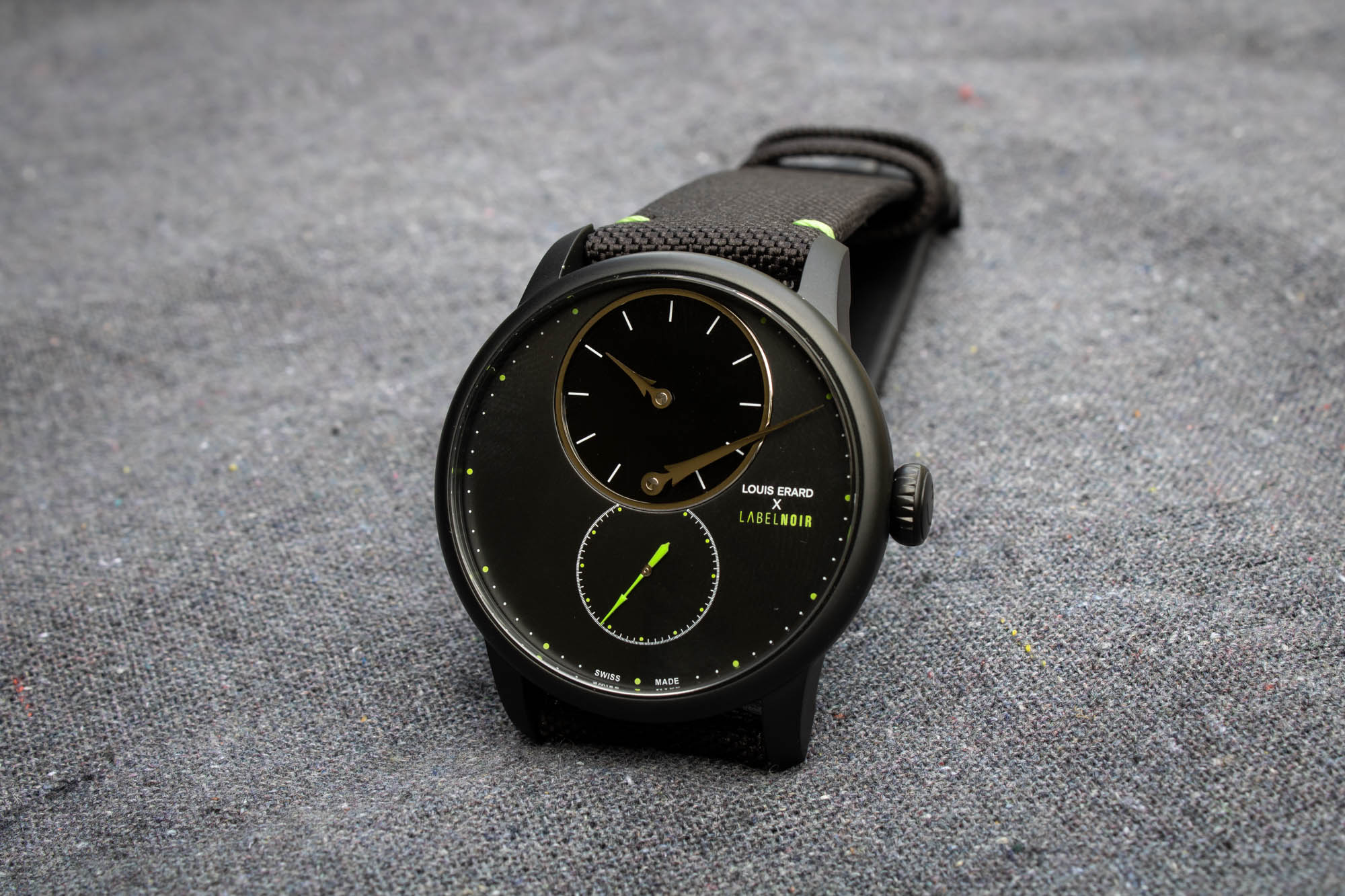 Some of my favorite watches that Louis Erard produces are its various Le Régulateur models that are created in collaboration with brands and artists such as Massena Labs, Alain Silberstein, and seconde/seconde/. Although it is still technically a three-handed, time-only watch, a regulator configuration (where the hours, minutes, and seconds are each displayed on a different axis) lends itself particularly well to being an open canvas for interpretation, especially compared to the more rigid framework of a traditional watch dial with three centrally-mounted hands. The latest model to join the collection is the Louis Erard x Label Noir Le Régulateur, which is produced in collaboration with the Geneva-based design house that many people probably most frequently associate with the customized blacked-out timepieces that it produces as bespoke creations for its clients. My hands-on experience with Louis Erard’s watches has been fairly limited yet all rather positive, and as someone who had previously never had the chance to see one of Label Noir’s works in the metal, I was happy to get a chance to spend some time with this new collaboration piece from the two brands that is being produced as a limited edition of 178 pieces. 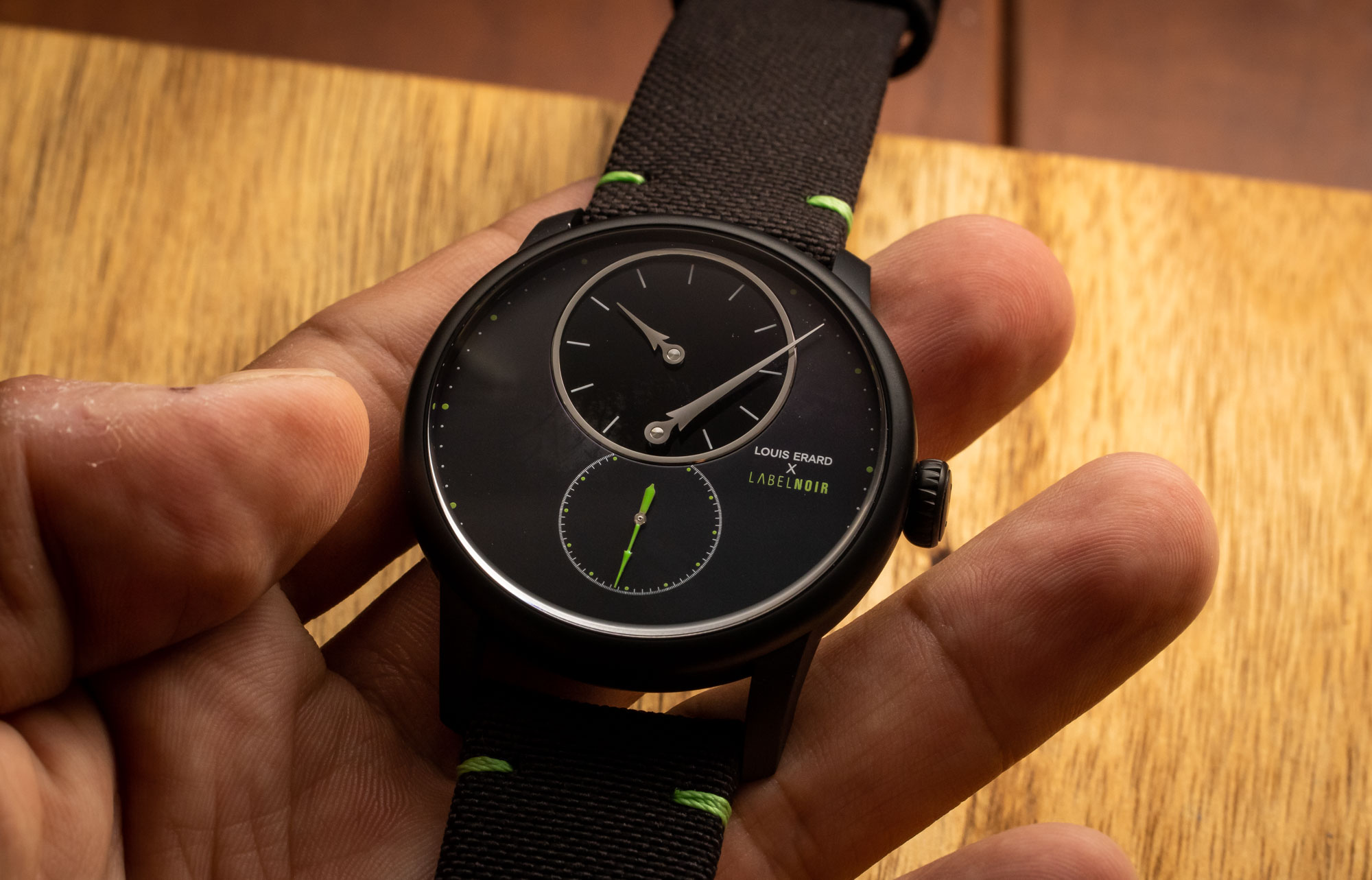 The entire case of the Louis Erard x Label Noir Le Régulateur watch is crafted from sandblasted stainless steel that has been given a matte black PVD coating. The case itself measures 42mm in diameter by 12.25mm thick, including its slightly domed sapphire crystal which features anti-reflective treatment on both sides and sticks up just above the rim of its domed bezel. The lug width measures 22mm, while the total lug-to-lug distance measures 49.6mm (including the slightly angled tips of the lugs), and although the widest point on the case does measure 42mm across, the case itself features a slight conical shape that tapers down to just under 39mm where it meets the caseback. A signed push/pull crown located on the side of the case at the 3 o’clock position also receives a black PVD treatment, and it offers access to the movement while simultaneously helping provide the watch with a fairly standard 50 meters of water resistance. On the reverse side of the case, the caseback features a green-tinted display window that offers a view of the movement within, and it is this feature that is arguably my single favorite design element on the watch. While the movement itself doesn’t feature any elaborate decorations, I personally love clear things in bright colors, and the green display window ties together the small pops of the same color that can be found throughout the rest of the watch. 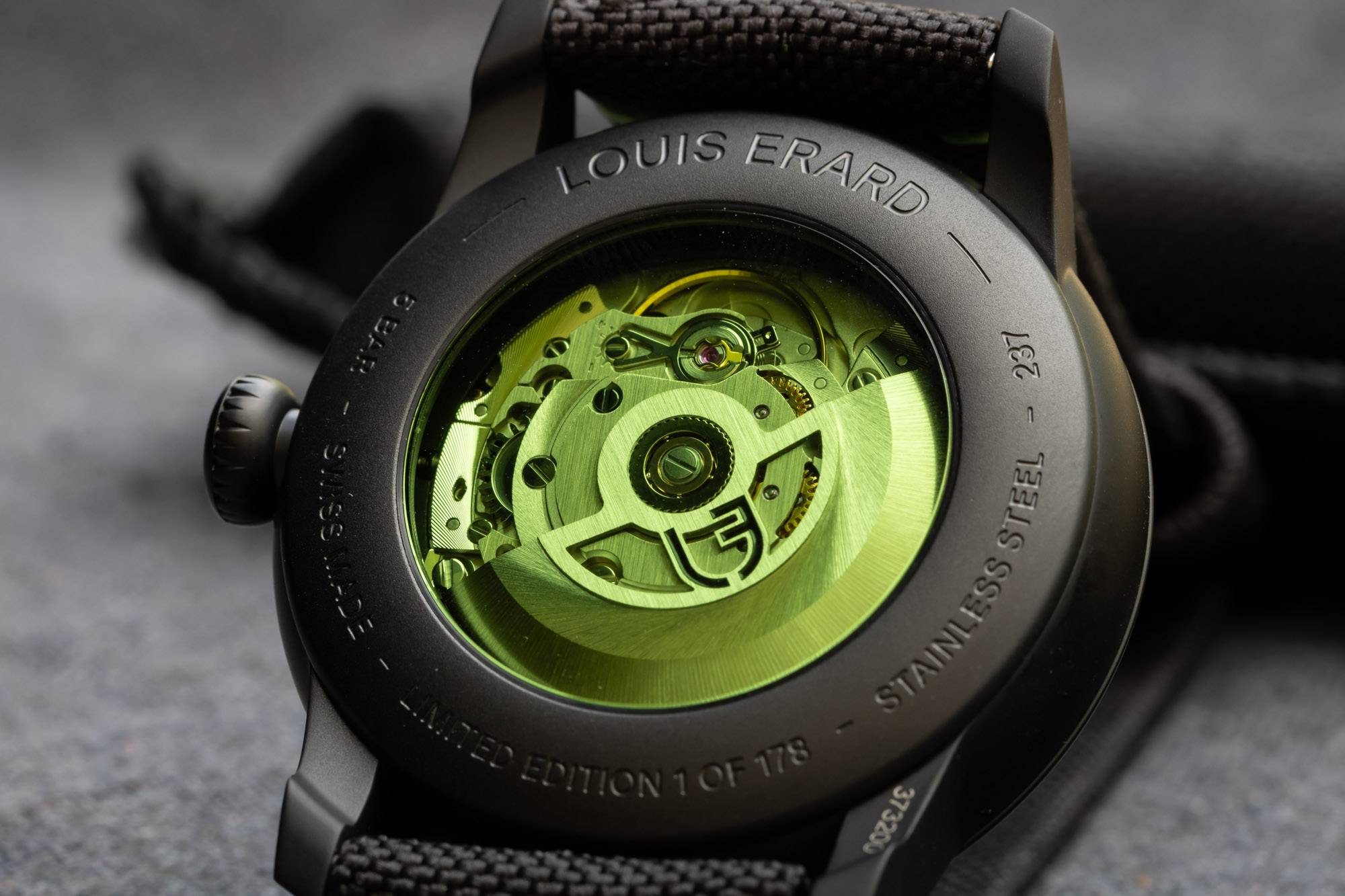 The dial itself features the typical configuration of Louis Erard’s Le Régulateur watches, with the hours displayed at the top, followed by the centrally-mounted minutes hand in the middle and the seconds placed at the bottom towards 6 o’clock. The dial surface features a faint vertical satin finish that can almost give it a deep gray appearance in certain lighting, and it includes small pops of white and bright green printing. The hour hand sits within a polished black lacquer sub-dial at the 12 o’clock position, which is framed by a polished rhodium-plated ring that further adds dimension to the appearance of the dial. The “Louis Erard X Label Noir” logo appears at 3 o’clock in white and green text, while the hands follow Louis Erard’s signature “fir tree” shape, with the hour and minute hand given a mirror-polished rhodium plating, while the seconds hand receives a bright green lacquer finish. Despite being rather simple in design and monochromatic in its overall appearance, the contrast between the vertically brushed dial surface and the gloss black hour register with its small mirror-polished elements ultimately makes for a rather dynamic design that offers a lot of visual intrigue as it plays within the light and shadows. 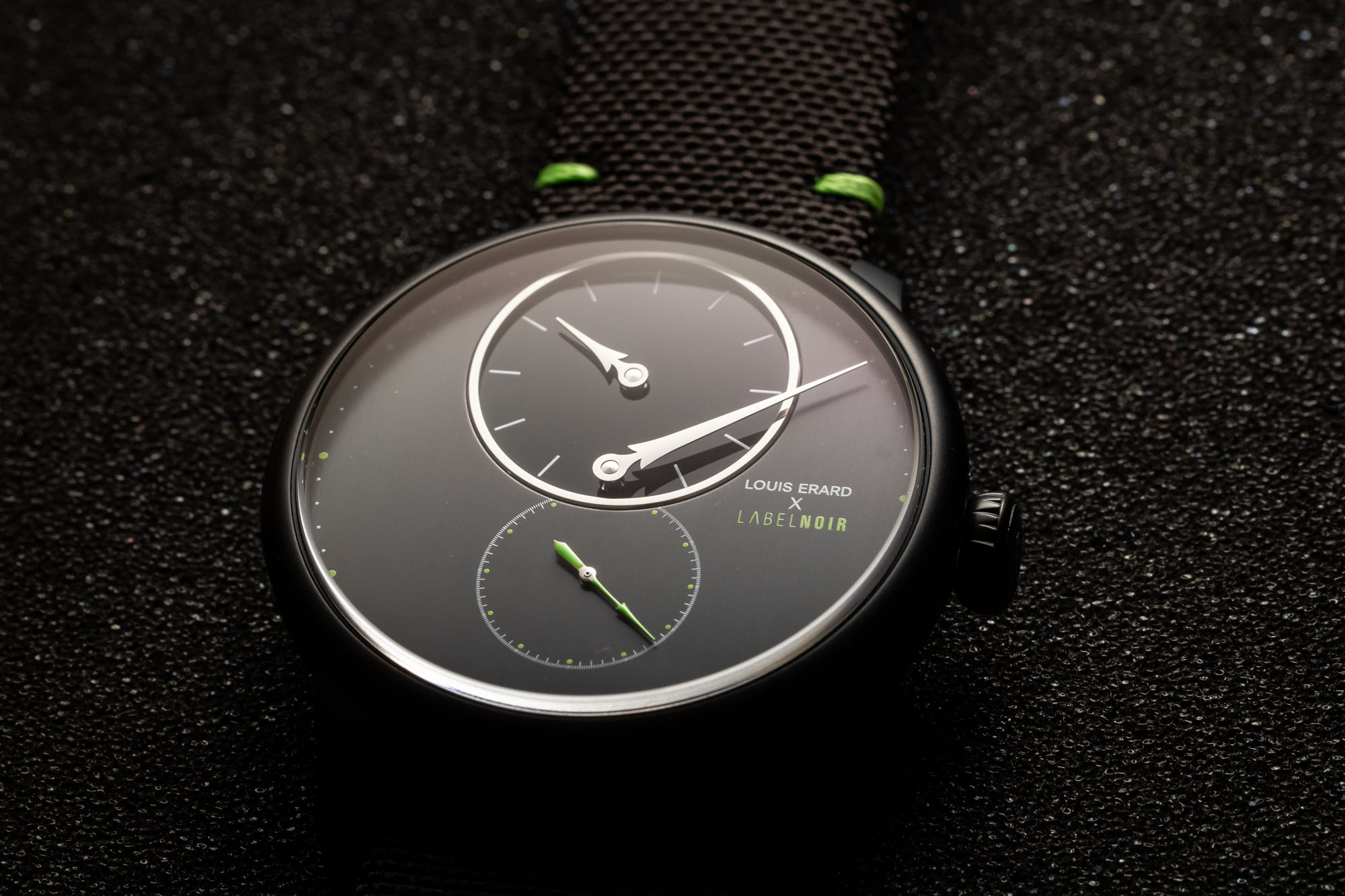 Powering the Louis Erard x Label Noir Le Régulateur watch is a modified version of the Sellita SW266-1 automatic movement that has been slightly re-worked to allow for the model’s signature regulator configuration, in addition to being given a custom skeletonized rotor. Those familiar with the commonly used ETA-base design recognize the architecture of the movement through the display caseback, and since it is based on the Sellita Cal. SW266-1, it runs at a frequency of 28,800vph while offering users a power reserve of approximately 38 hours. Some collectors will almost certainly wish that it featured an in-house movement (as usual); however, given that this is a limited edition, time-only watch that features a slightly unconventional display, the possible additional benefits that an in-house caliber could provide would be relatively minimal and would have ultimately just resulted in a higher retail price and significantly fewer options when it comes to repairs and service. 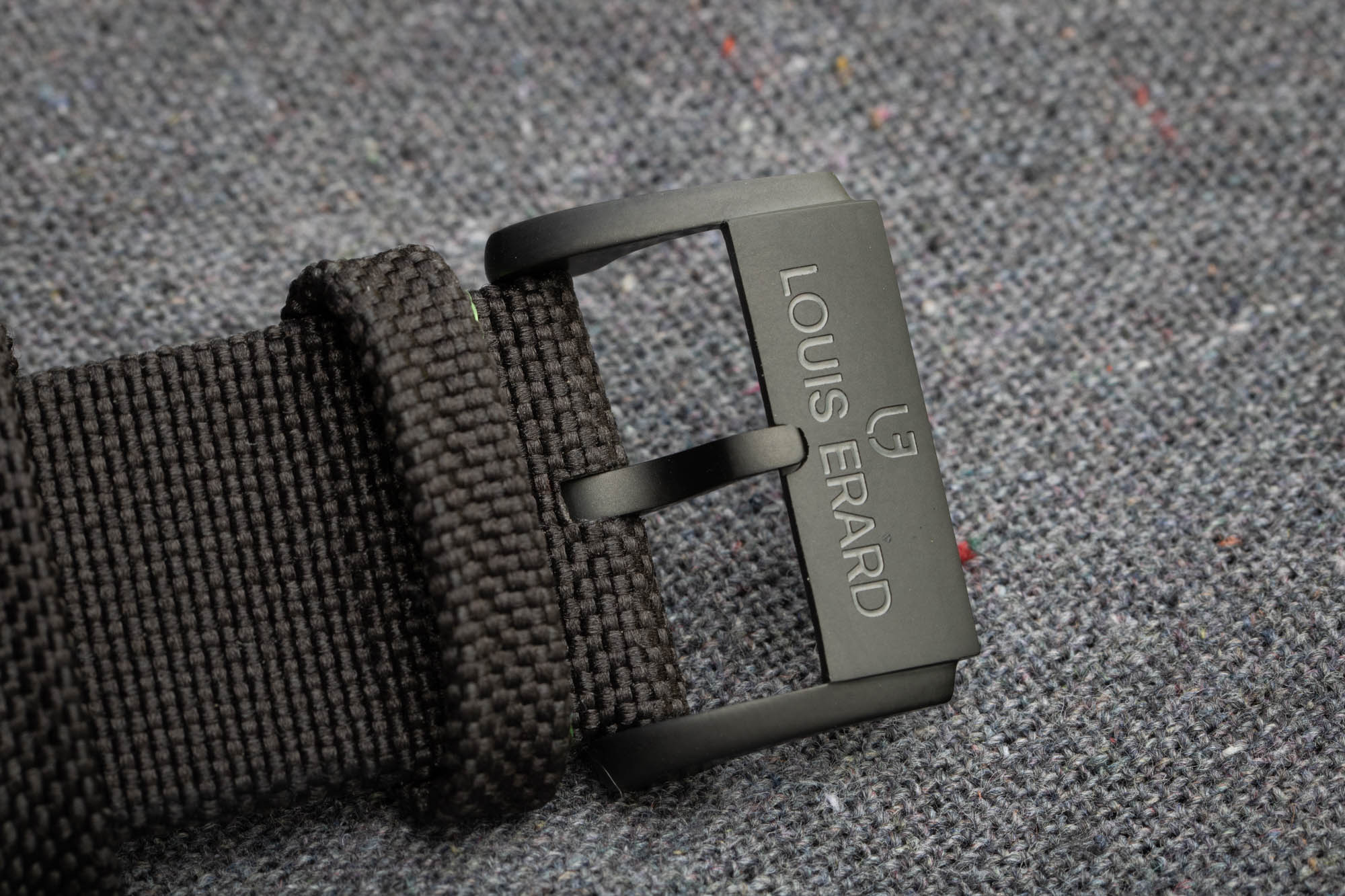 Completing the watch is a black strap with small pops of bright green contrast stitching on each side that measures 22mm at the lugs and tapers down to 20mm at the buckle. The strap itself is fairly supple right out of the box and it is made from black nylon with a matching black calf leather lining for added comfort on the wrist. Connecting the strap to the watch are a set of built-in curved quick-release springbars that permit easy strap changes, while the opposite end of the strap closes with a sandblasted stainless steel pin buckle that is signed with the Louis Erard logo and given a matching black PVD finish. While the strap itself is comfortable, the outside edges of the lugs are slightly sharp, and depending on the shape of your wrist, you may get a small poke from a corner every now and then. Realistically speaking, this minor quibble will likely only apply to a small segment of the population with wrists that have just the wrong shape, and even still, this is something that could possibly be remedied by playing around with strap options to alter the watch’s stance on your wrist. 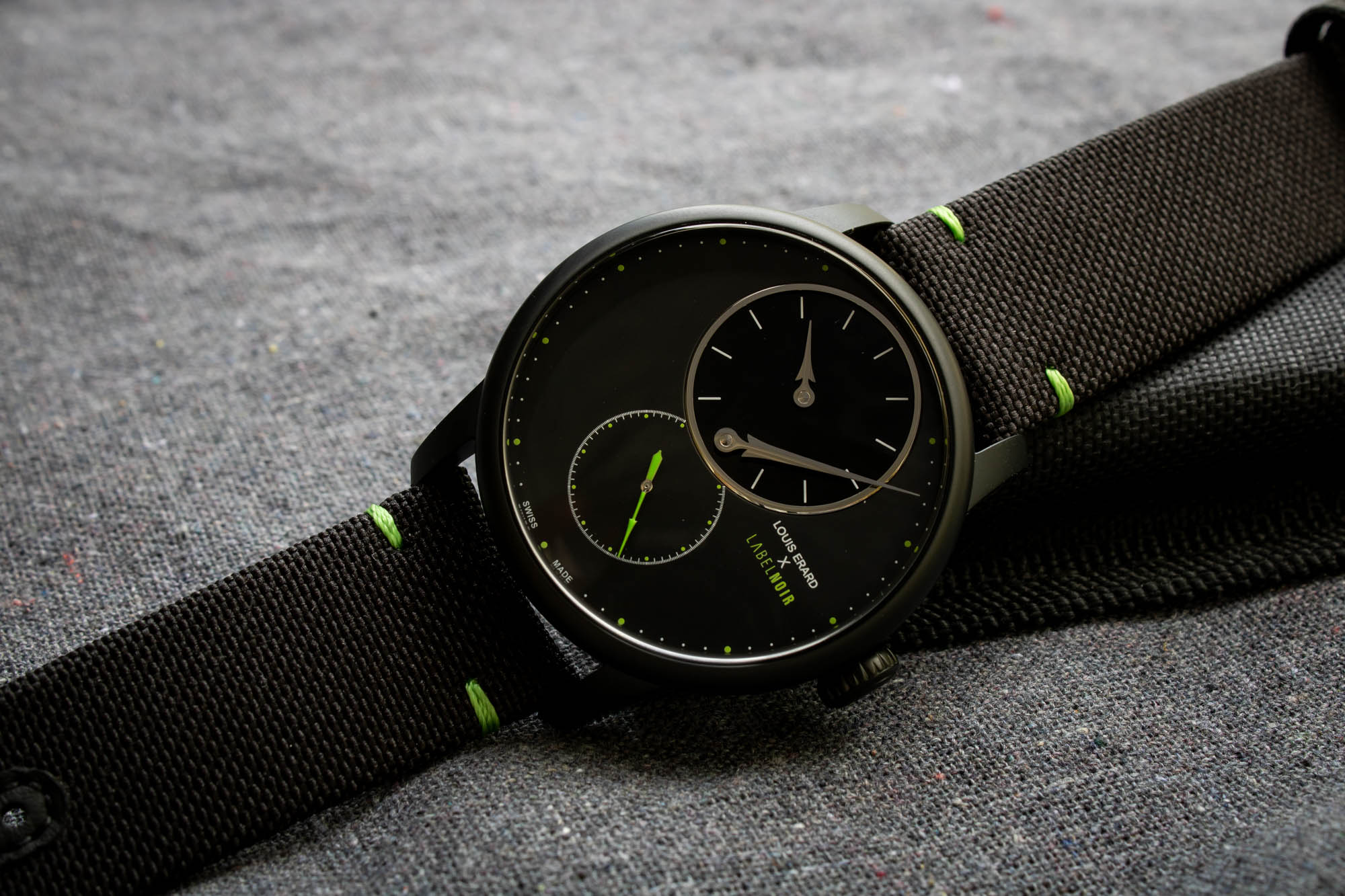 Many of the most successful collaboration pieces are those that equally incorporate the design language of both brands involved in the creative project, and while this particular watch may initially seem like it is just a blacked-out version of a standard Louis Erard Le Régulateur, it is actually a model that fits in far more easily among Label Noir’s existing designs, compared to those from Louis Erard’s catalog. Given its official retail price of  3,500 CHF, I’m sure that there will be some people out there who say that the Louis Erard x Label Noir Le Régulateur watch is too expensive for a model that uses a Sellita-based movement. However, this price is right in line with what the brand charges for the rest of its various regulator collaboration watches, and it is also a 178-piece limited edition produced in partnership with a company that usually spends its time customizing Rolex watches as bespoke projects for individual clients, so it is hardly the most outrageously priced option on the market either. The nice part about Louis Erard’s collaboration regulator models is that each one is different, and each new one that gets created only further expands the options that are available to collectors. For more information, please visit the brand’s website.