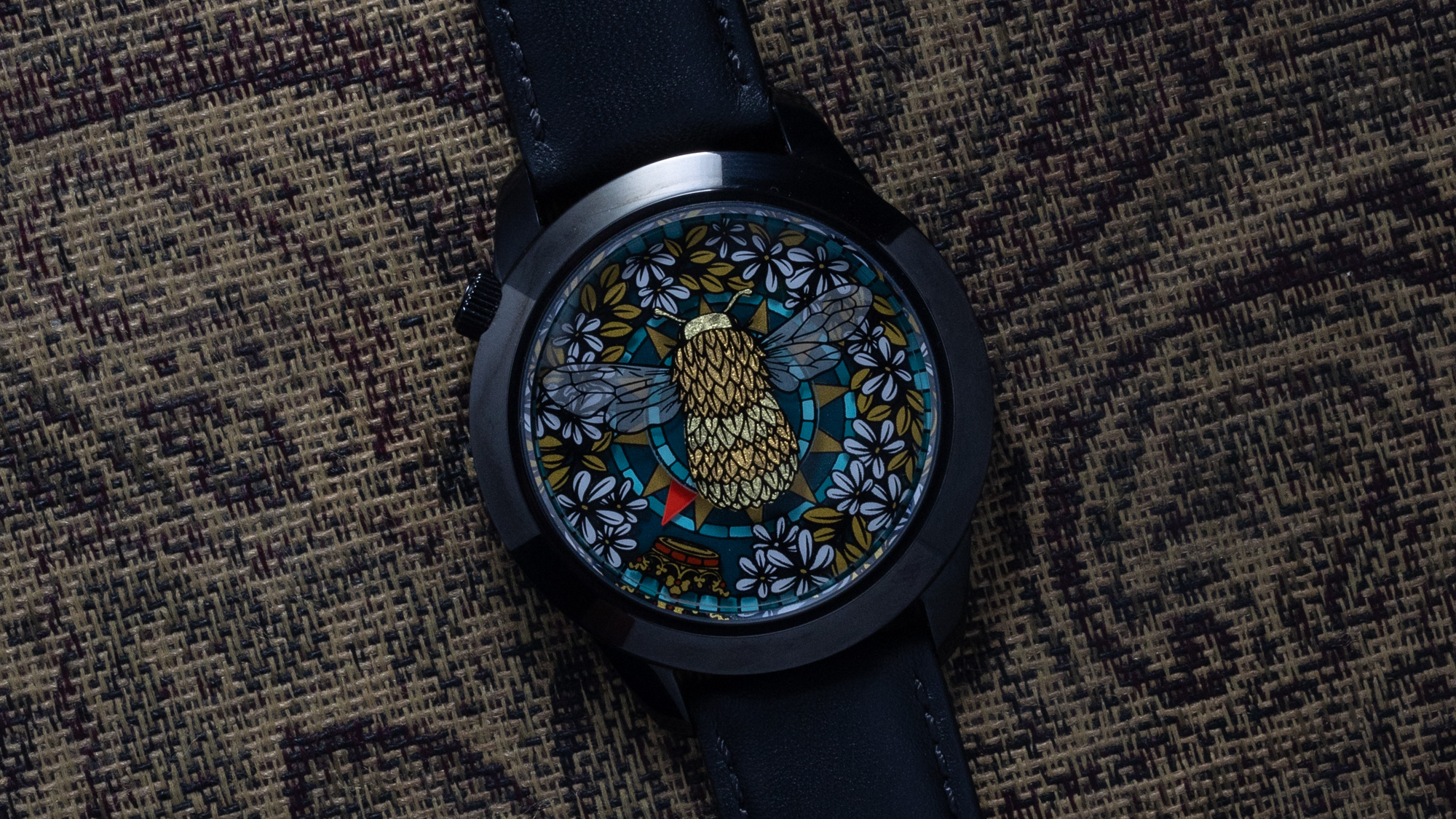 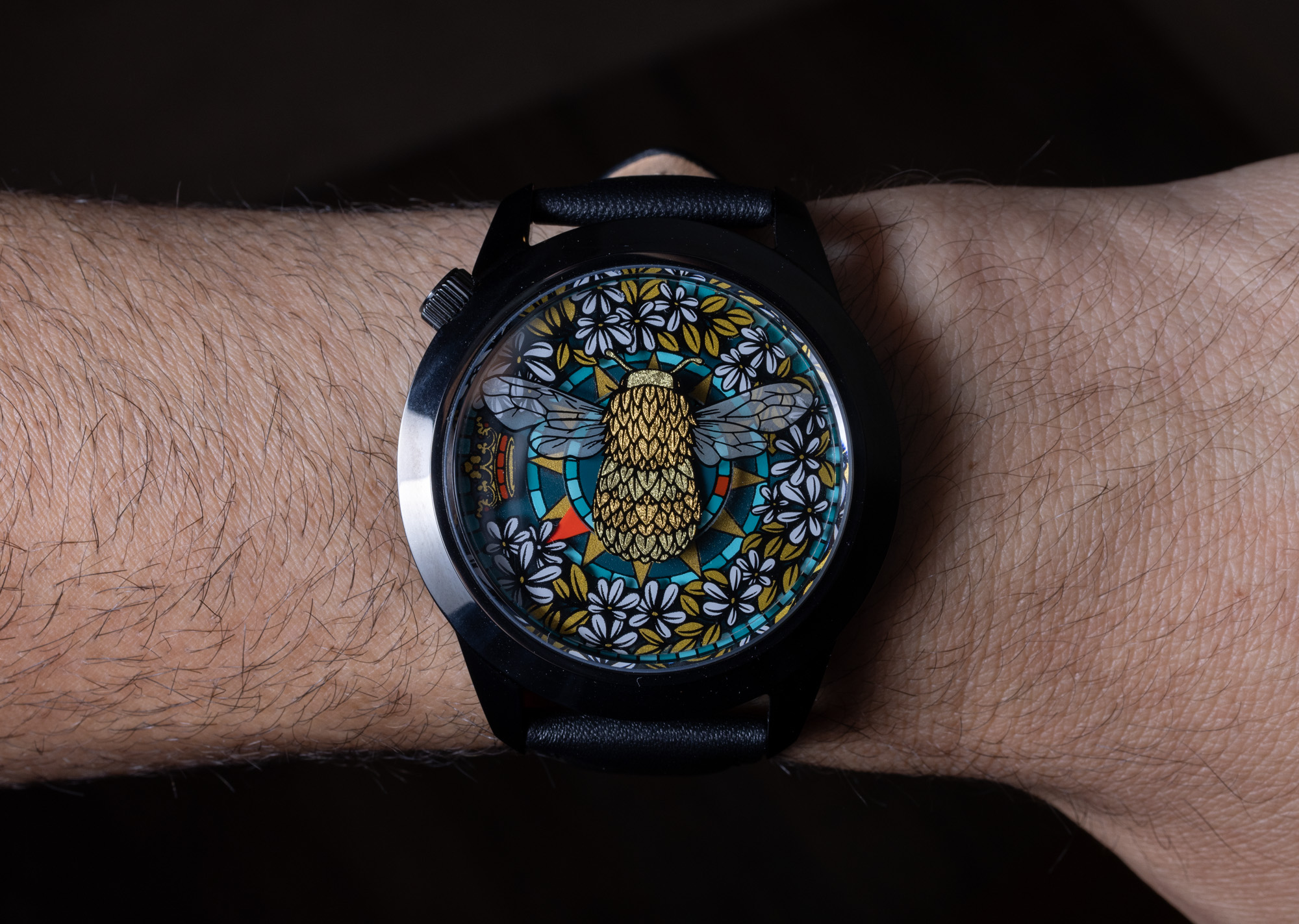 Today, I take a look at one of the newest limited-edition watches from London-based Mr. Jones Watches. It is a  nice-looking timepiece known as “The Golden Hour,” and it uses Mr. Jones Watches’ larger “XL” case that is 45mm-wide, providing an ample artistic palette. Designed by artist Andy Wilx, The Golden Hour is meant to celebrate the tradition of proud English gardens. Mr. Wilx does this through an interesting assembly of features and aesthetics that call upon traditional illustration practices, as well as the studied geometry that typifies the layout most English gardens attempt to pursue.

These are all, of course, nuanced details with the primary visual on the dial being a large centrally positioned bee and two discs that indicate the time behind an upper outer layer of flowers. The hours are indicated by a red (not golden) arrow, and the minutes are identified by a moving crown that occupies the same plane as the flowers. The result is a visually rich and interesting artistic experience that also happens to tell the time. 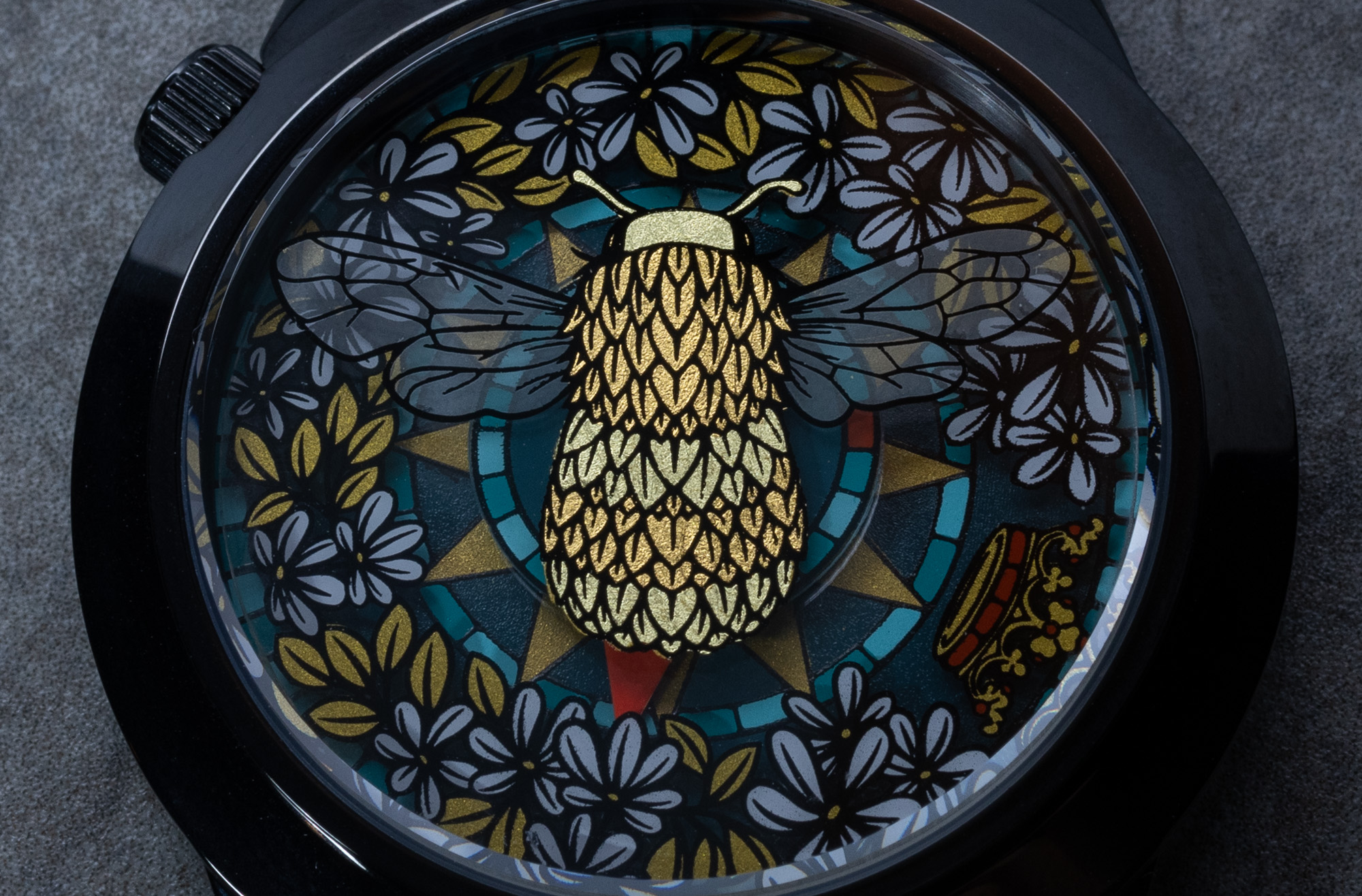 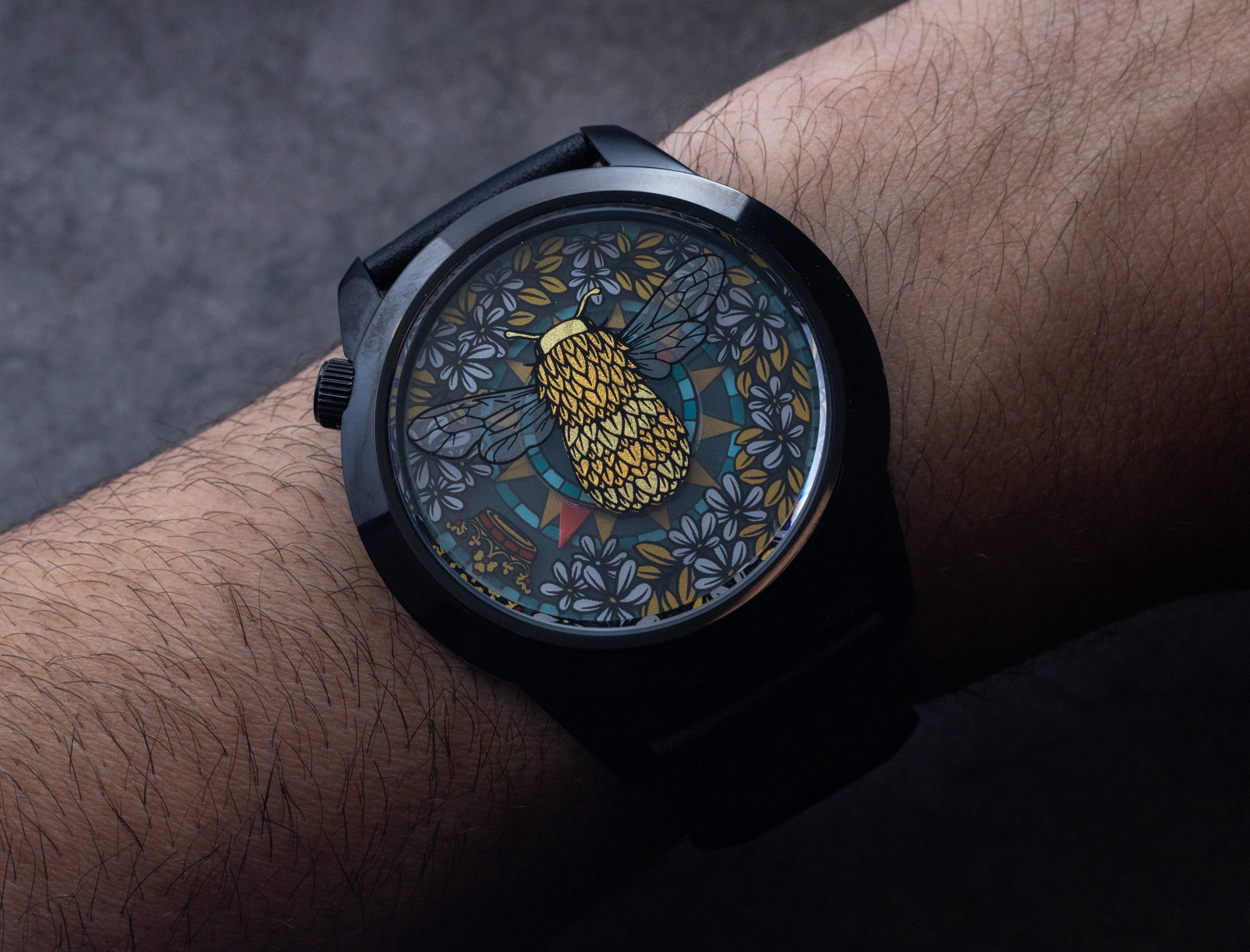 Mr. Jones Watches began as a creative space for founder Crispin Jones, but years ago, he realized the value of featuring the work of other artists in his brand. While the luxury world is awash with news of “collaborations,” Mr. Jones Watches has been doing just that (successfully) for years now. In my opinion, the way Mr. Jones Watches does this is an excellent model, and Jones and I discussed just this during our recent SUPERLATIVE Podcast episode.

Why the bee? According to Andy Wilx, Jones just loves bees and the motif, in general. Using established themes is a really core part of English design and architecture, something that flows into classic English gardens. Unlike most structures and spaces in a city or town, gardens are mainly for pleasure and relaxation. Thus, the English garden has become a bastion for emotive art and design principles. With many ways of artistically approaching how to incorporate the concept of a manicured garden into a wristwatch, Mr. Jones Watches The Golden Hour is an interesting and visually captivating manner of doing so. 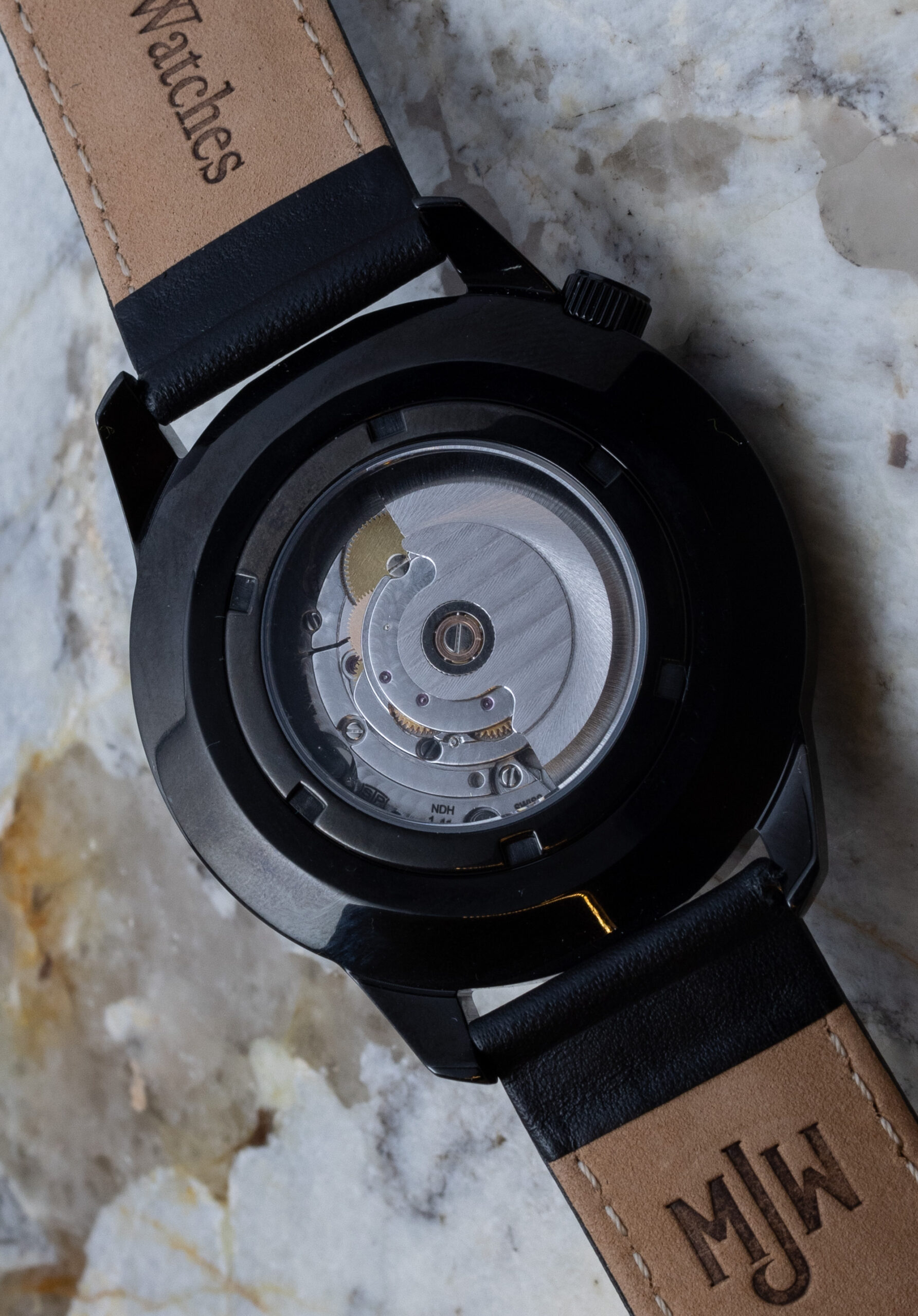 A third disc wheel closer to the center of the dial indicates the running seconds — a scale that has its own red indicator to read the seconds. Legibility is not too bad given the overall visual design of the dial, though, at times, it can be hard to read the precise time at a glance when indicators are currently under the semi-opaque bee wings. That said, the “statement value” of The Golden Hour watch is high, so wearing a watch like this as an artistic expression is going to be why people choose to wear it.

Mr. Jones Watches used a PVD black-coated version of its 45mm-wide steel case for The Golden Hours timepieces. The case is water resistant to 50 meters and is topped with a flat AR-coated sapphire crystal. The case is further 13mm-thick and has a 53mm lug-to-lug distance. It wears large, but that is part of the point so that the dial is a maximal size in order to display the artwork-themed watch face. 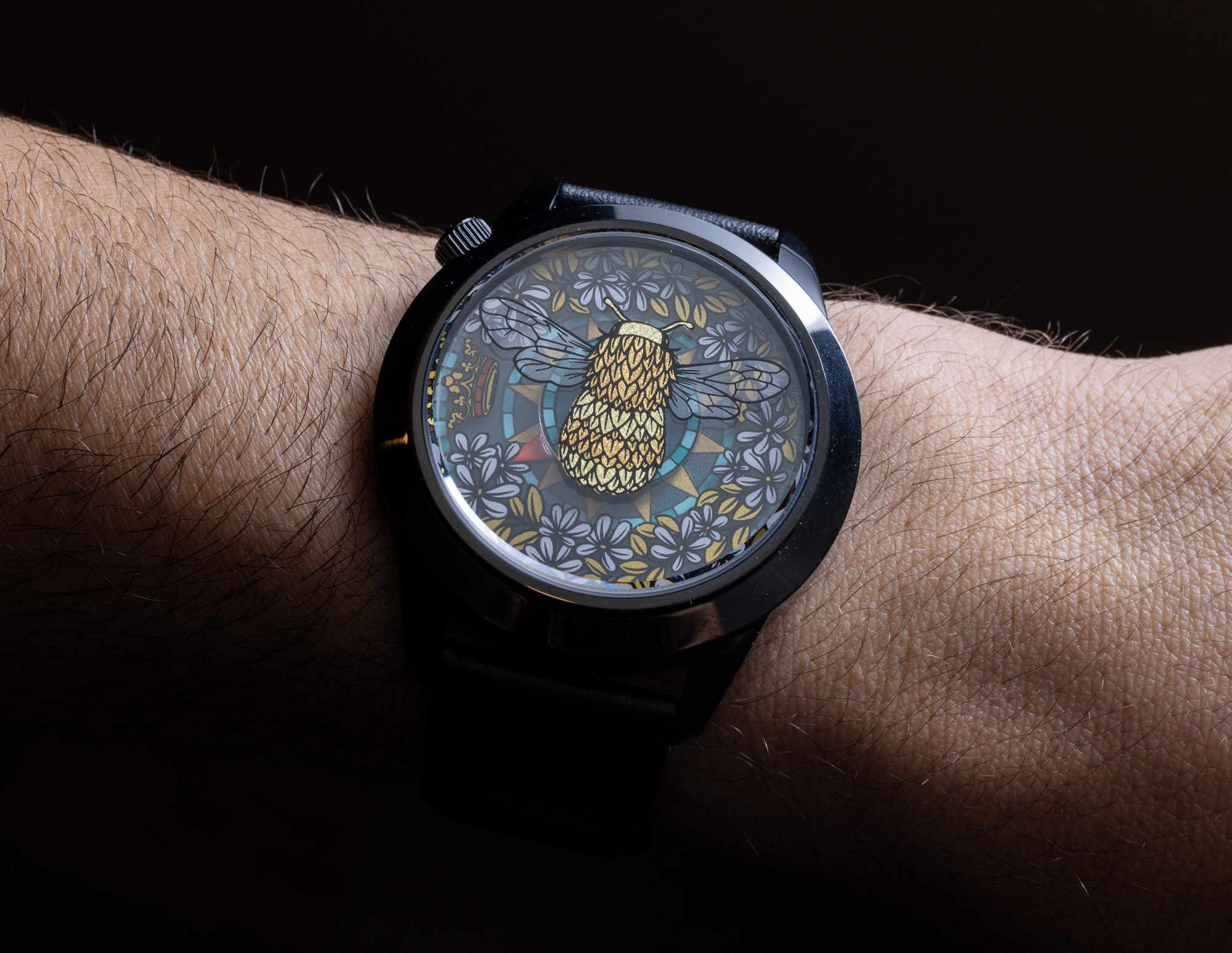 Inside the Mr. Jones Watches The Golden Hours watch is a Swiss Made STP 1-11 automatic movement. These are the same movements you’ll find in a lot of Zodiac watches (STP is owned by the Fossil Group but produces movements in Switzerland). You can view the 4Hz, 42-hour power reserve mechanical movement through the window on the rear of the watch case. Mr. Jones Watches pairs The Golden Hours watch with a simple black leather strap. It works well and makes sense at this price point, but I feel that there could have been a lot of opportunities to offer a separate strap that continues the English garden theme or at least the aesthetic that Andy Wilx carefully designed into The Golden Hours watch.