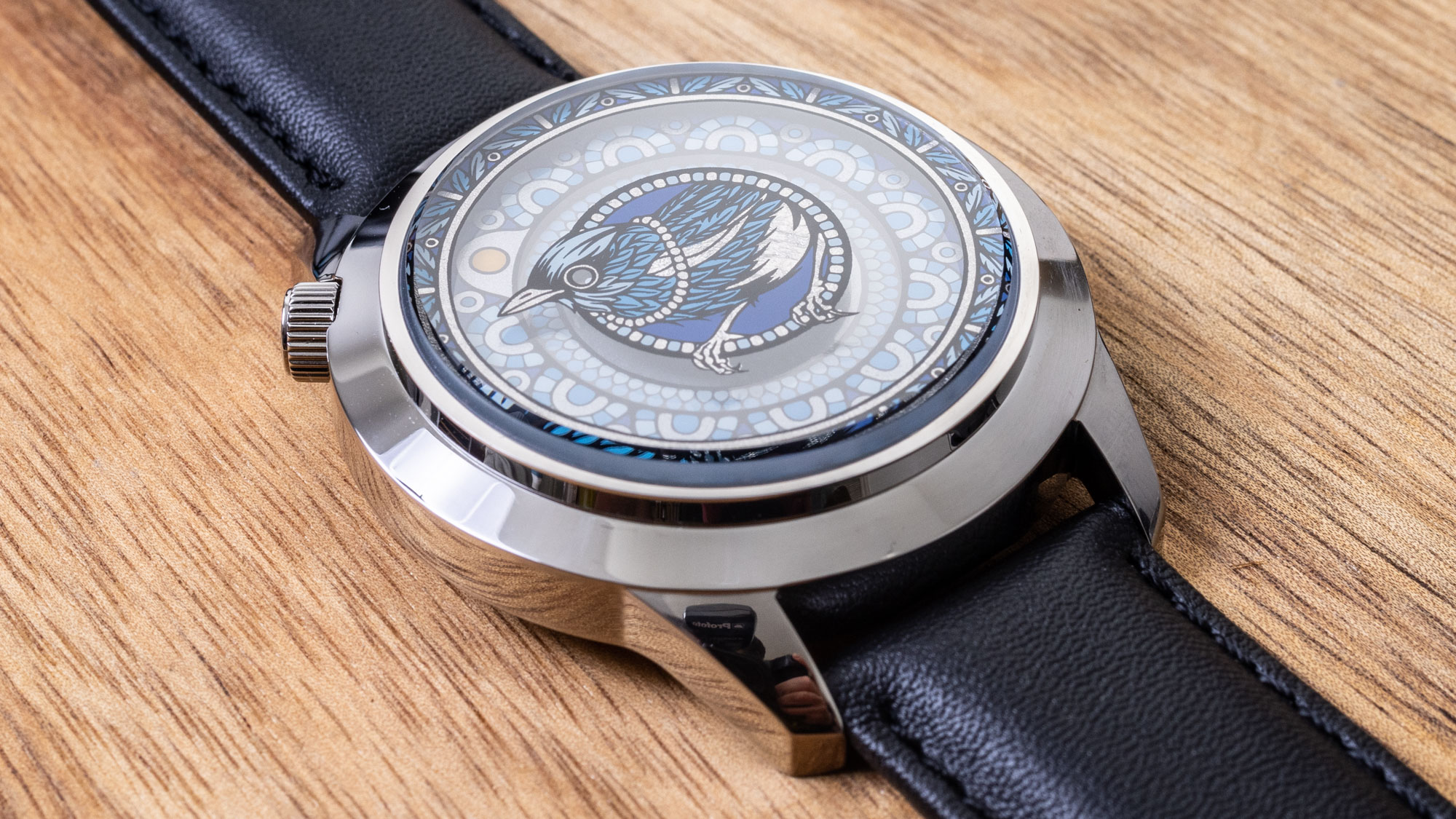 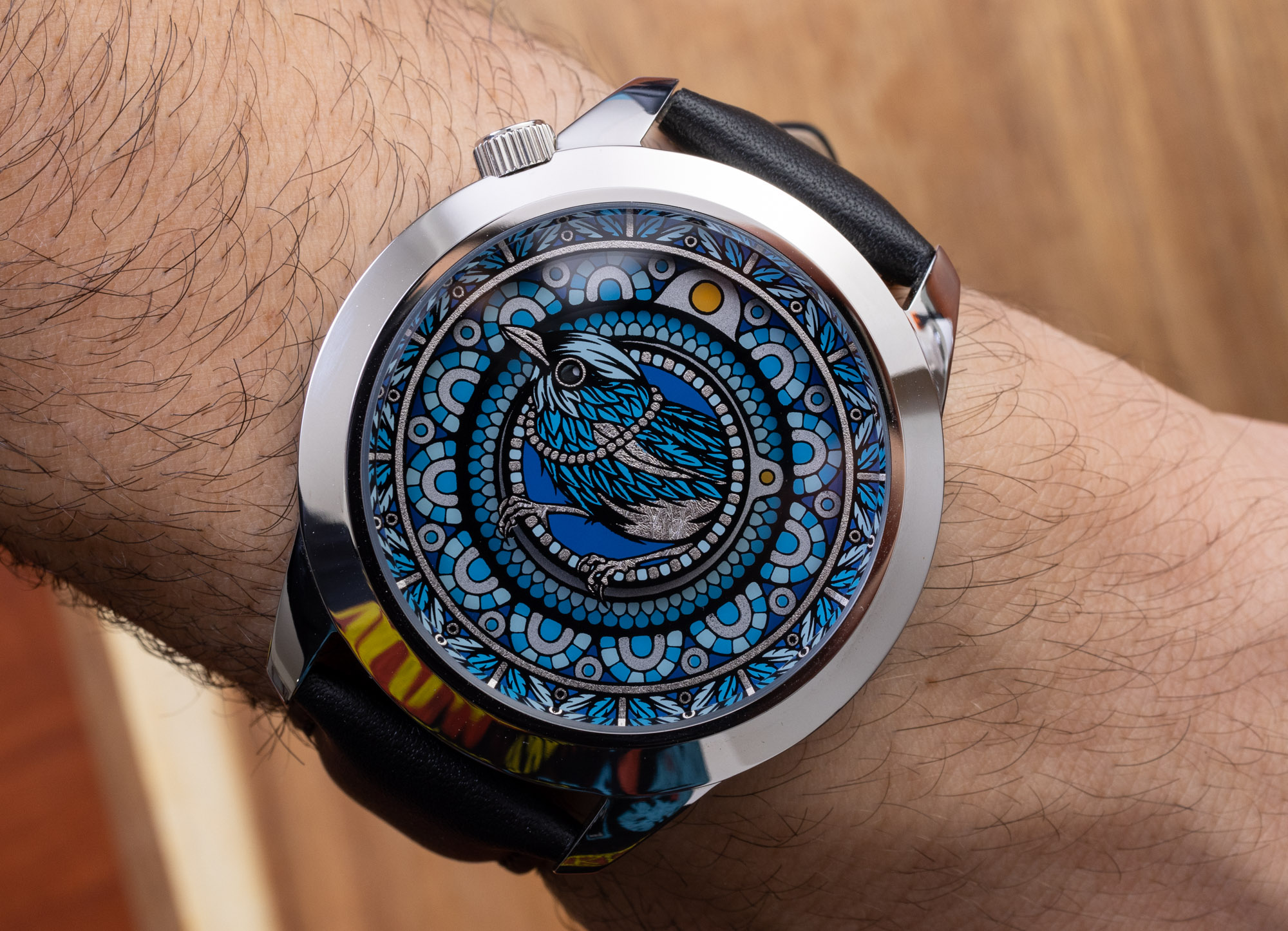 Sometimes you need to continue a good thing. That was the case with the initially limited-edition Mr. Jones Watches “The Silent Thief,” which debuted in 2021 as a set of 100 pieces with a black-coated steel case. The artistic timepiece, with a dial designed by British artist Andy Wilx, proved too compelling, and the decision was made to bring back The Silent Thief watch as part of the core collection at Mr. Jones Watches. Of course, the non-limited production model has a few small differences, mainly in the form of cosmetic colors, that distinguish this model from the 2021 limited edition version.

Watches like The Silent Thief are Mr. Jones Watches at its best. Founder Crispin Jones is an MFA-equipped artist and, likewise, has a tendency to hire fellow (mostly also UK-based) artists to contribute designs. That is the case with The Silent Thief, which, as I said earlier, has a dial designed by Andy Wilx. The dial motif in my opinion is quite stunning and takes an interesting approach to a watch dial that uses discs in order to indicate the time. Hours and minutes are displayed via yellow sun-style orbs printed on the rotating discs for the hours and the minutes. It actually is rather legible even though the main focus on the dial is clearly not on the hour and minute indicators. While the dial doesn’t per se have a seconds indicator, there is a subtle use of the seconds hand disc which operates the “eye roll” of the magpie bird. If you look closely at the eye, a pupil moves in and out of view as the disc rotates. Offering the illusion that the magpie is “looking around” and watching you. It is a very fun little effect and at a very affordable price point. 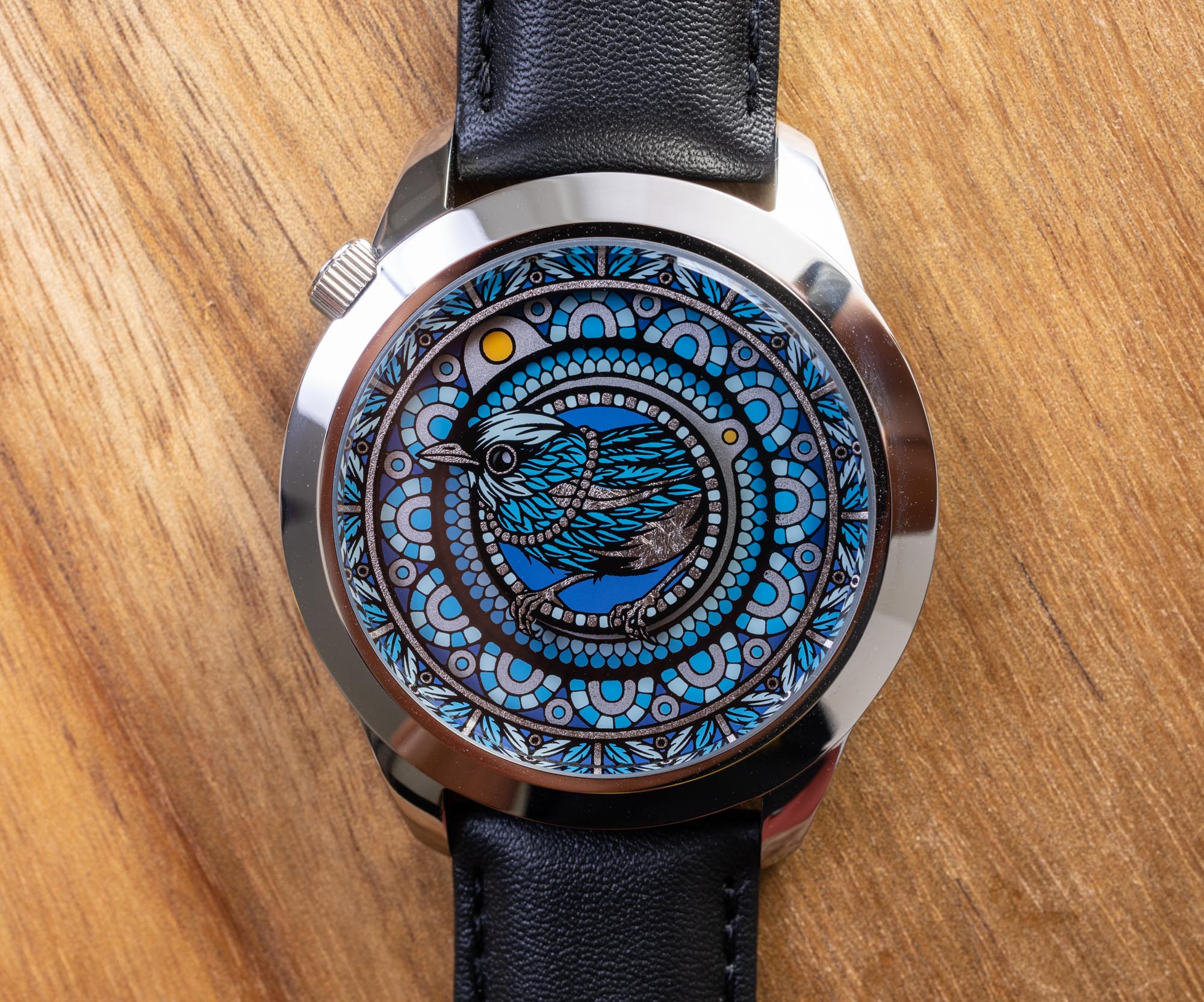 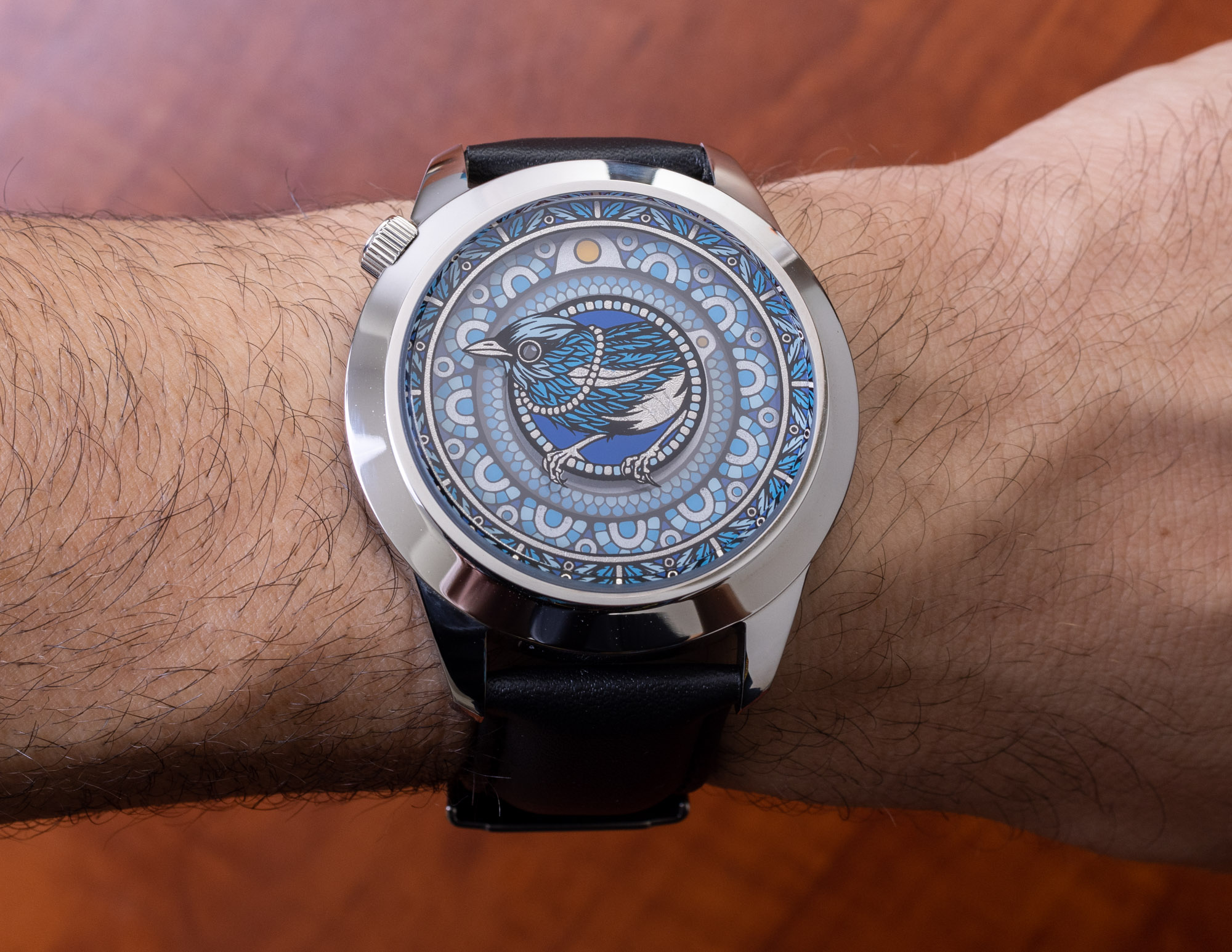 Magpies are known as among nature’s thieves, and they perform their craft silently. According to artist Andy Wilx, you can draw a parallel between a bird stealing from you and how time takes from you to comment on how, in nature, “Time is an everpresent, silent thief.” This is very much in line with the ethos behind the popular “Remember You Will Die” memento mori-style watches also produced by the Mr. Jones Watches brand. The overall artistic composition on the dial is beautifully ornate and reminds me of illuminated manuscripts. Similar to those antique manuscripts, The Silent Thief dial is gilded using precious metal. The first limited-edition version of The Silent Thief used gold for the dial gilding, and this more blue- and silver-tone version uses palladium.

Each of the dials is printed by hand, one color at a time, according to Mr. Jones Watches. This happens at their London-based workshop. Andy Wilx was apparently imagining all the things a Magpie might steal, and in this picture, our dial-based hero is wearing a (presumably stolen) necklace. The watch itself uses Mr. Jones Watches larger 45mm wide “XL” case that is made from polished steel and is water resistant to 50 meters. The case is also 13mm thick and has a 53mm long lug-to-lug distance. Over the dial is a sapphire crystal and the case has a sort of raised bezel and box-style sapphire crystal that is interesting, but tall. That makes for a large watch, but certainly not too big for most wrists and what you gain with the larger timepiece is increased dial space as a visible artistic palette. 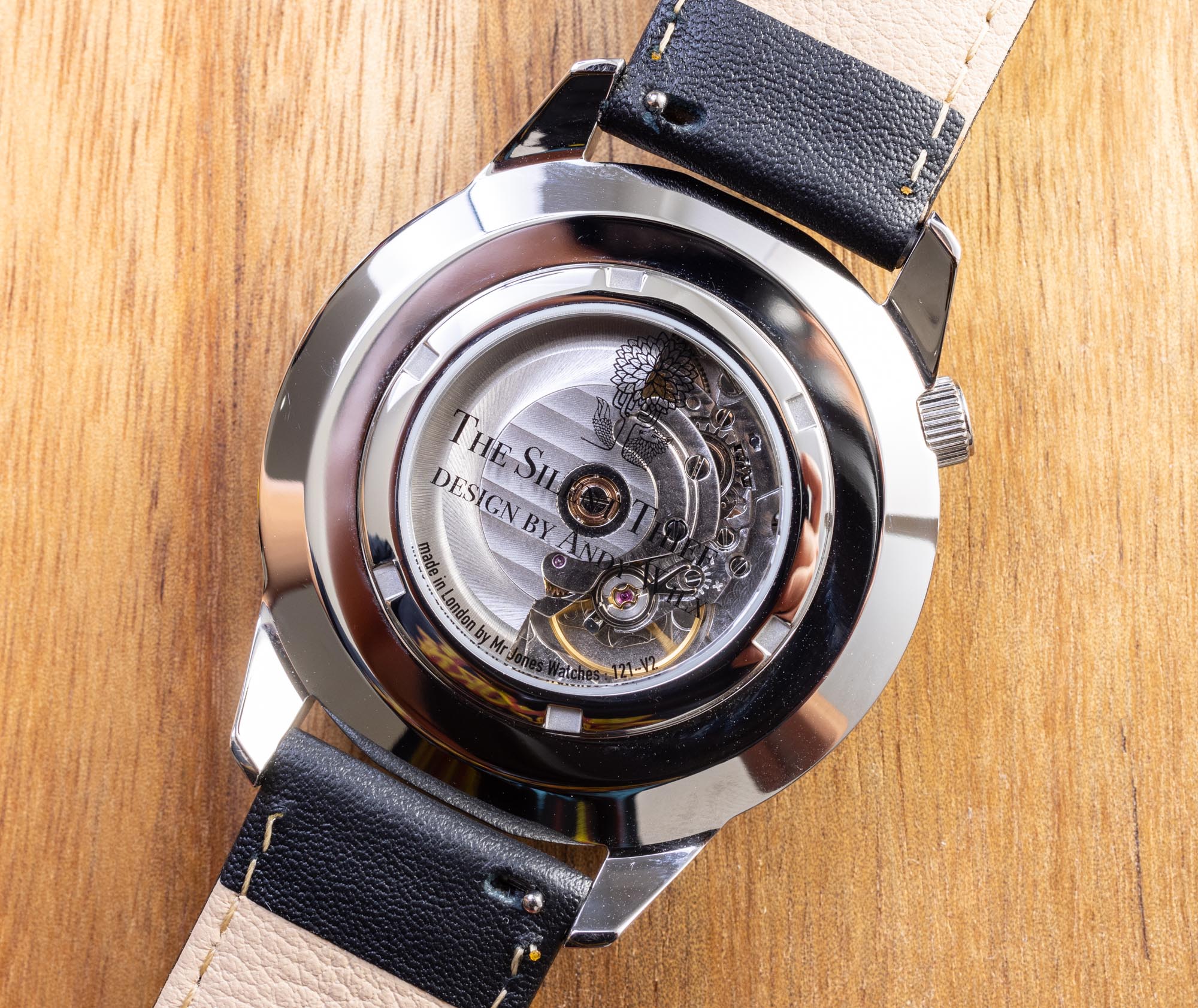 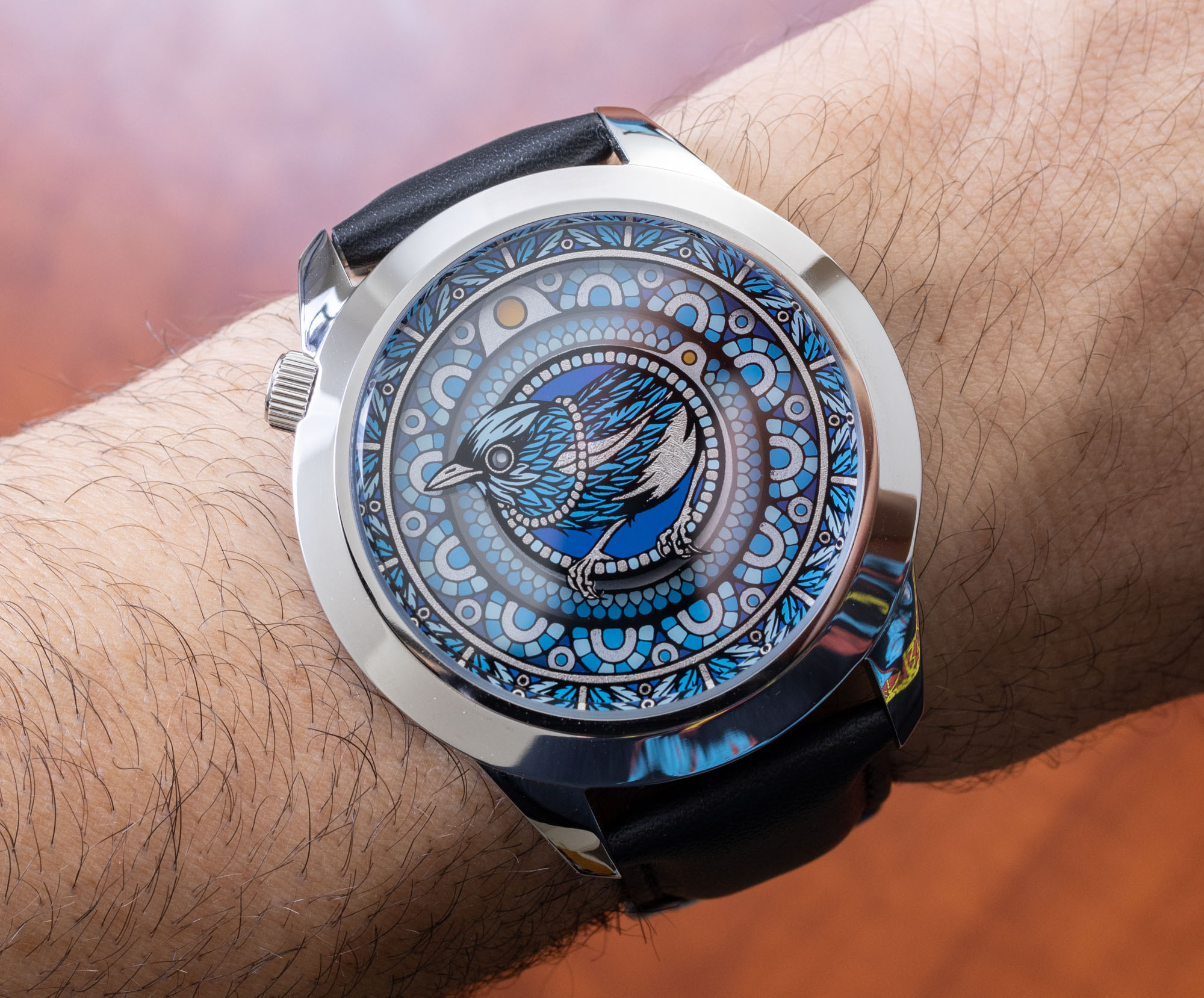 This watch also contains a Swiss Made movement, the STP caliber 1-11 automatic, which operates at 4Hz with about two days of power reserve. The movement is visible through the caseback window, which is also where the name of the watch is placed, helping owners to better understand the origin of this design. I really love this watch overall, given the beautiful and visually compelling dial. What I wasn’t as thrilled by is the stock black leather strap that comes with the watch. Nothing wrong with the 22mm wide strap aside from the fact that it is a bit boring. Mr. Jones Watches pairs these same black leather straps with a host of interesting and unique dial designs. To me, this is a missed opportunity to make a more active fashion push with the brand’s products. What I did was quickly remove the strap (which comes on handy quick-release spring bars) and replaced it with a blue leather strap that, in my opinion, was a very slick visual upgrade. Given the relatively affordable price point of Mr. Jones Watches, I don’t think the strap issue is a big deal because, clearly, Mr. Jones Watches is inviting wearers to experiment with their own strap choices. Price for this non-limited edition version of the Mr. Jones Watches “The Silent Thief” is £495. Learn more or order at the Mr. Jones Watches website.