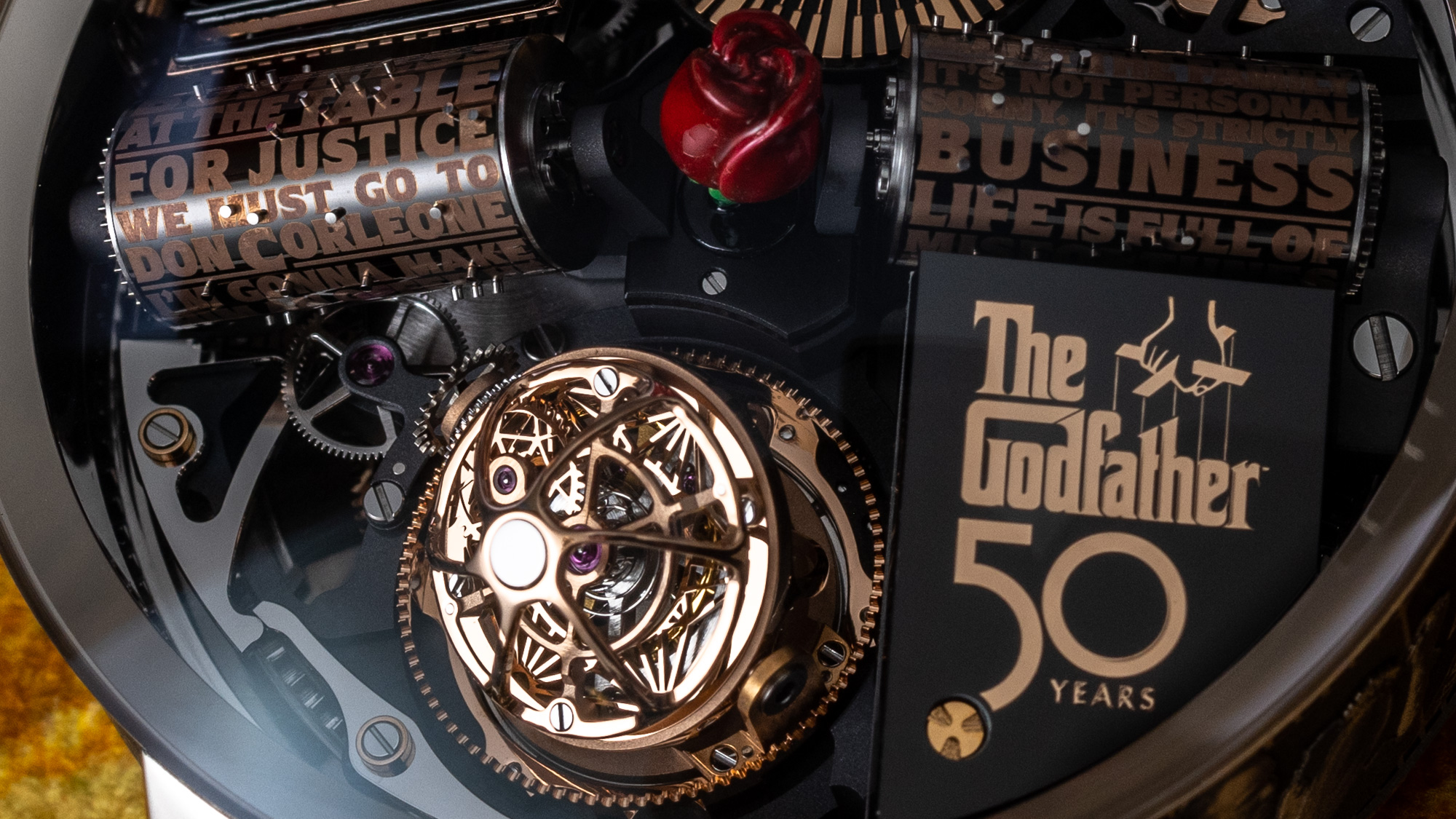 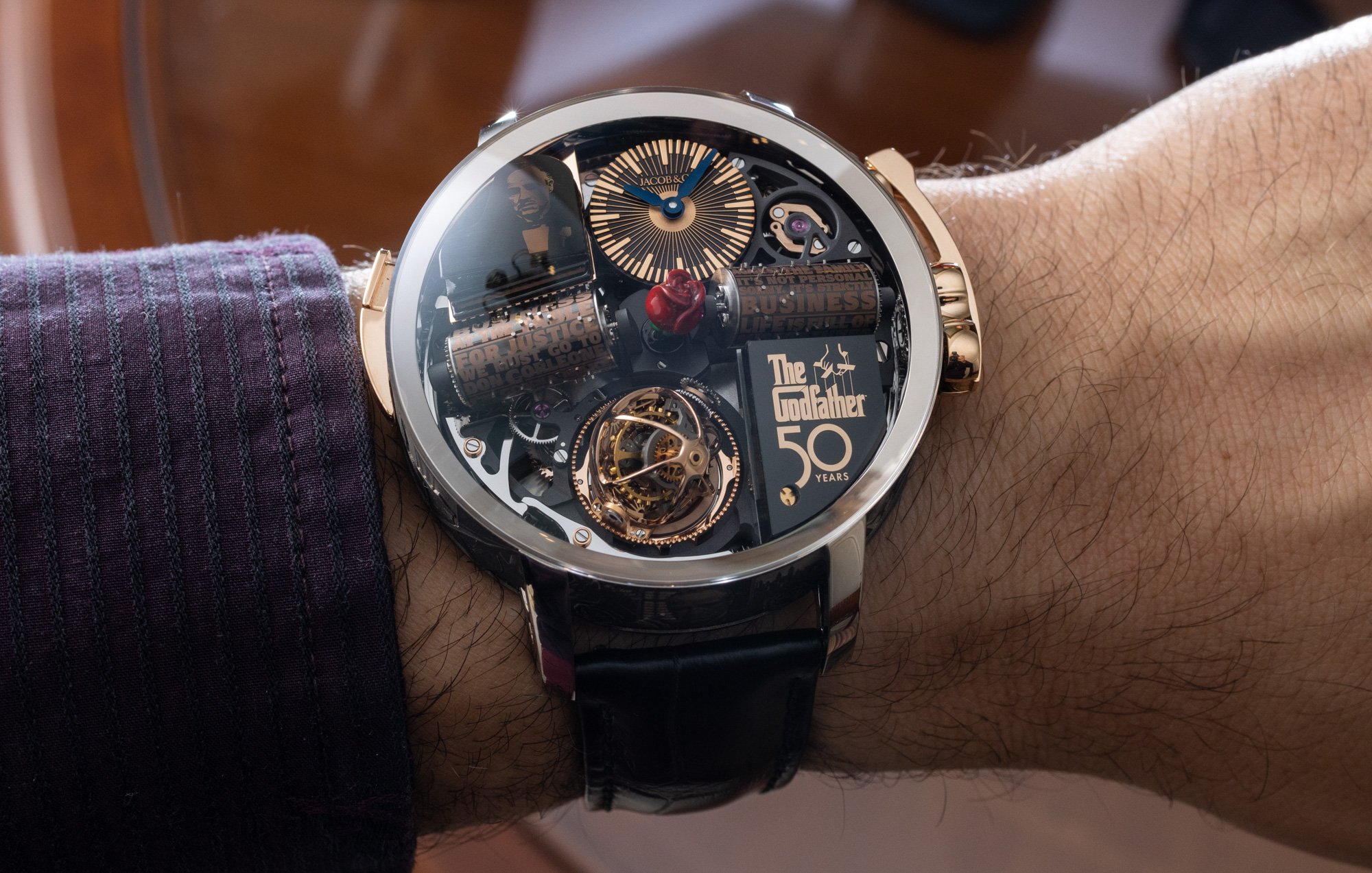 In Sicily, Italy, Jacob & Co. made one of the American-Swiss company’s loudest brand moves yet. The family company founded by namesake Jacob Arabo invited VIP guests and distinguished members of the luxury media community to celebrate the launch of its latest limited-edition watch (read more technical details about the reference OP110.30.AA.AA.ABALA Jacob & Co. Opera Godfather 50th Anniversary watch on aBlogtoWatch here). This particular set of timepieces was designed in honor of The Godfather film — a movie near and dear to Jacob’s heart that was partially filmed in Sicily in 1970. The event, centered in the historic destination city of Taormina, was much more than a mere watch release party. Rather, it was a definitive clarification of the values and character of the now-mature Jacob & Co. name — communicated at an event no one in attendance will soon forget.

Jacob & Co. has had a several-year-long relationship with Paramount Pictures, which owns the rights to The Godfather trilogy of films, and my understanding is that Paramount gave Jacob & Co. an interesting opportunity to come up with something special for the 50th anniversary of the first film. Previously, Jacob & Co. debuted a technically and emotionally marvelous timepiece in the original Godfather version of its Opera watch that used the music box complication in the Opera movement to play The Godfather theme score. The watch was also decorated with special Godfather imagery, including a small hand-painted miniature bust of Marlon Brando’s Don Vito Corleone character in the center of the watch.

The Opera watch is so dedicated to the music box functionality that all of its visible operating components are part of this system. More than 650 components in the mechanical movement separate the time-telling and music box complications systems so that they do not interfere with one another. This means that there is a separate mainspring barrel for the time + tourbillon, and for the music box + dial rotation system. The music box uses an appreciable amount of power, so using it often requires a spring rewind, which is done via the crank on the right side of the case, designed to look like a small violin. Once you have appropriately wound up the heart of the music box, the push-button activator on the left side of the case starts the music box system, which results in a fun dial animation that has it rotating on its own axis. The most impressive part of this is the gearing in the dial that indicates the time, which adjusts its position so that no matter where on the main face of the watch the off-centered dial for the time, 12 o’clock remains upright.

The music box components are truly specialty parts that only exist in the Swiss world of micro-mechanical engineering. Two rollers with tiny applied pins strategically placed on their surface brush up against the adjacent metal combs, creating musical notes and playing until the spring’s power runs out. Over the chiming blade, combs are black-colored sapphire crystal structures in the shapes of grand pianos that help extend the “opera” theme of this musical watch. The very center of the dial now has a hand-painted rose figurine. This is one of many images on the watch taken from The Godfather, here representing the rose that Don Corleone wore on his lapel on the day of his daughter’s wedding. According to Jacob Arabo, the wedding scene is among his favorite in the entire movie. 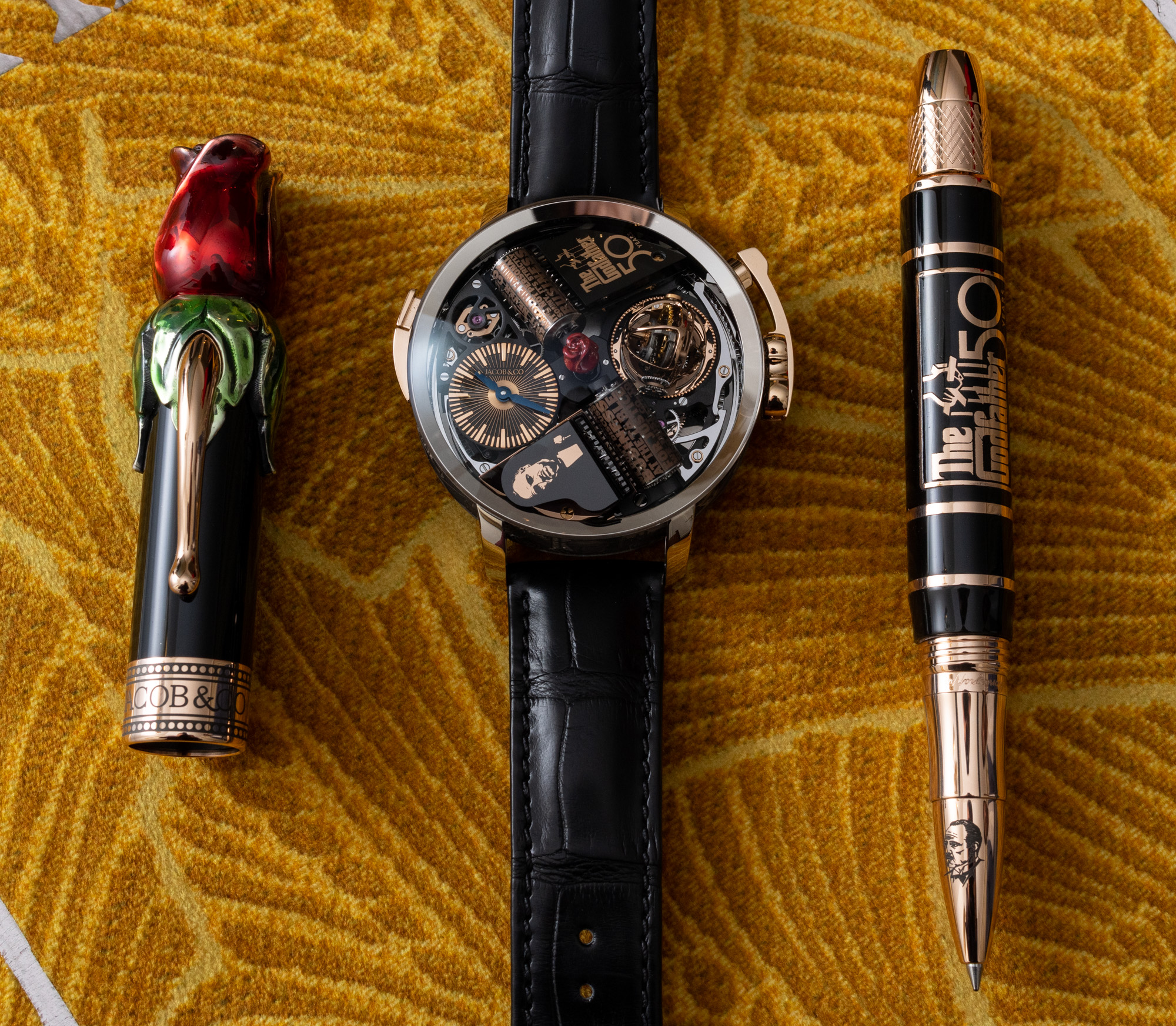 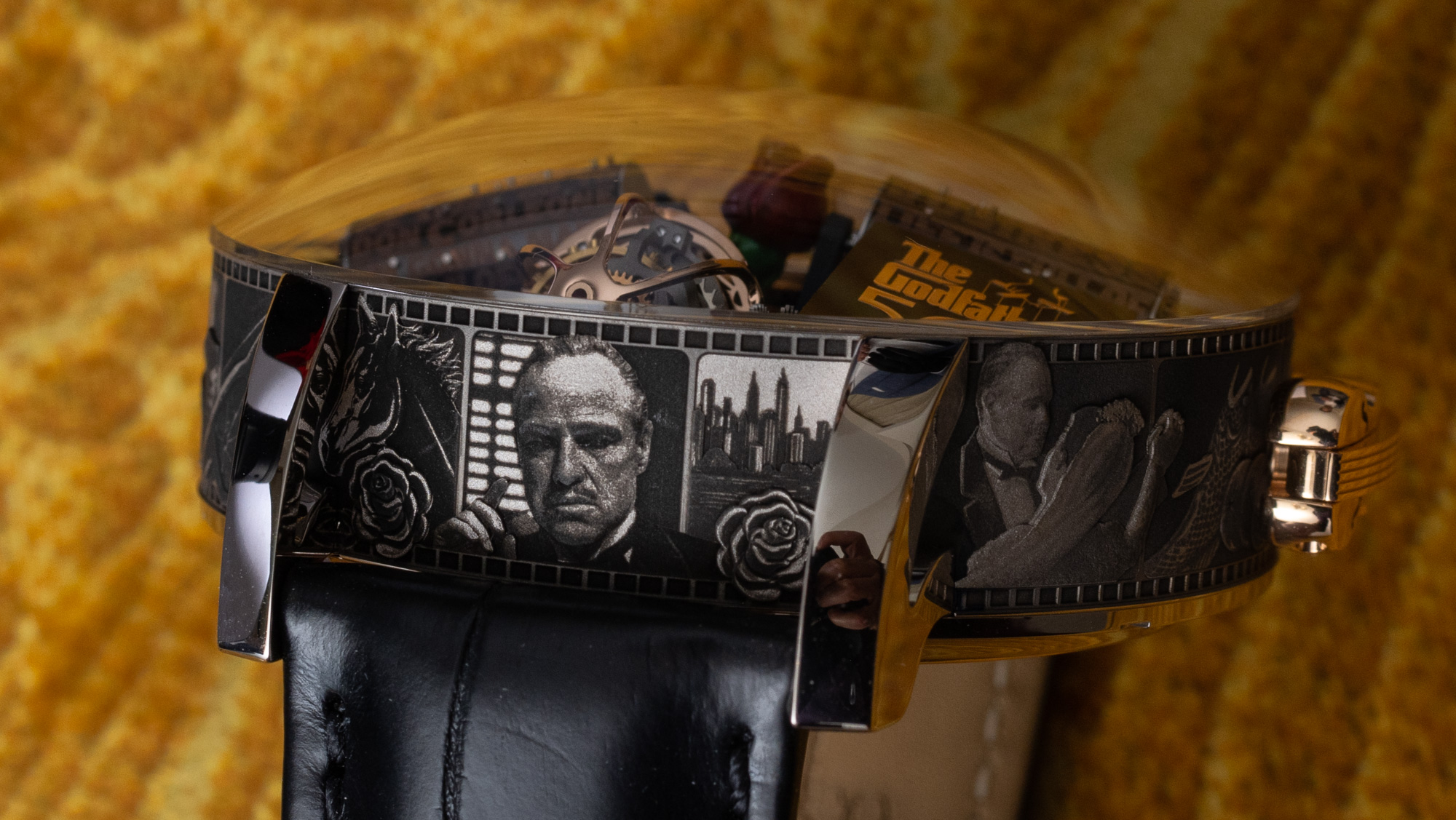 Speaking of Don Corleone’s daughter’s wedding, in attendance at the Jacob & Co. event in Sicily had to be one of the original movie cast members. Present was the great talent and personality Mr. Gianni Russo, who played the character who wed Don Corleone’s daughter in the film. Actor Al Pacino was invited to the event but could not travel for health reasons, and film director Francis Ford-Coppola was also invited but could not attend because he was actually currently filming a new movie. Mr. Russo regaled guests with stories of The Godfather’s production and further provided performance entertainment to Jacob & Co.’s distinguished guests that included brand collectors from around the world.

Jacob Arabo is clearly a mega-fan of The Godfather, and it is charming to hear about how he and his son have bonded over their shared appreciation of the cinematic classic. A strong business dynamic between Mr. Arabo senior and his son Ben is also apparent at this stage in the Jacob & Co. brand. Soft-spoken Jacob is the “creative genius” visionary who leads new production, while Ben acts as the company president and has taken quite well to the role of the brand’s spokesperson. Together with their larger team, the father and son duo runs the dynamic high-luxury brand, a company whose forte isn’t just its notably distinctive timepiece and jewelry creations, but also a lifestyle of fun, self-reward, a bit of glamour, global travel, and a celebration of bold impersonalities (whether real or imagined). 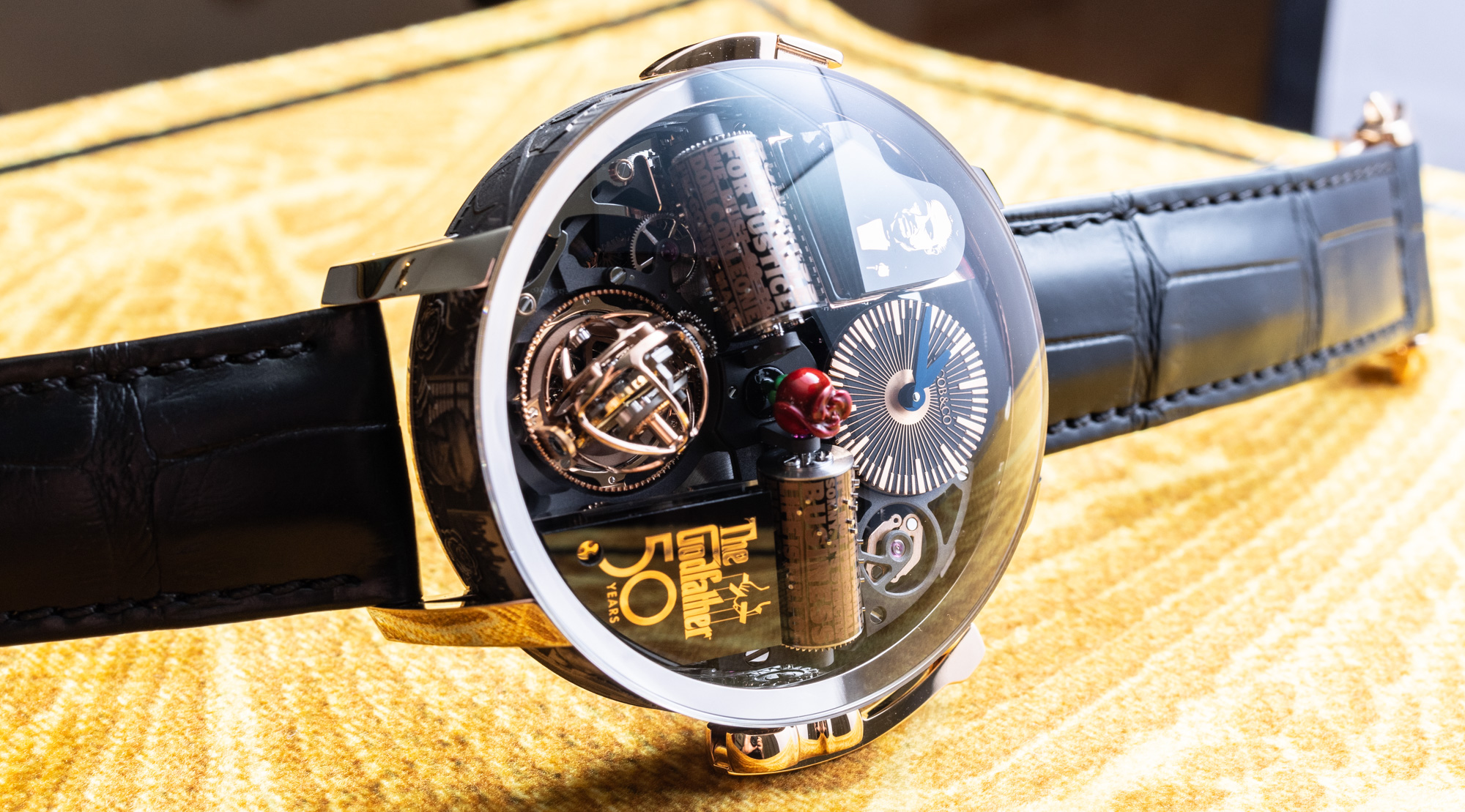 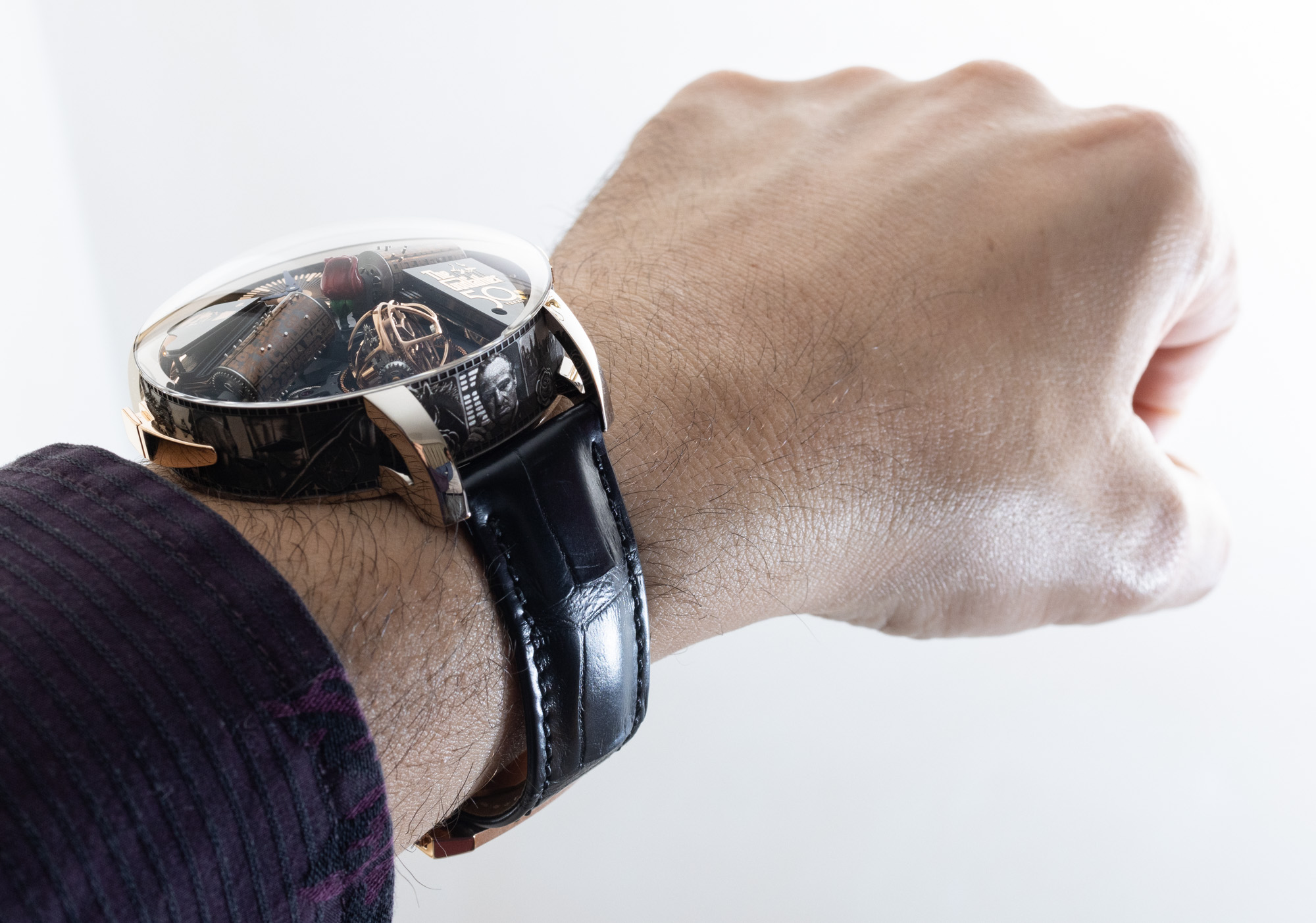 Jacob, like many of his clients, is understandably fascinated by the impressively written lines and standout performances in The Godfather movie adaptation of Mario Puzo’s famed book. In fact, famous lines and famous scenes from The Godfather decorate and distinguish the half-million-dollar limited-edition 50th-anniversary timepiece. These visually manifest themselves in the form of movie line text engraved into the two rotating music box pin barrels, as well as the selection of 13 film scenes that are applied like a film around the periphery of the nearly 50mm-wide case.

Once Jacob formed the idea to put movie scenes on the case of the watch, the next challenge was figuring out a technical way of achieving it. Jacob Arabo is often driven by novelty and has a duty to imagine things that haven’t been done before. Not everything he imagines is possible, but no one knows until they try. That is part of the allure of Jacob & Co. watches — the fact that the creative person at its helm is rarely held back by known technical and production limitations. He has a vision, and he will explore all available techniques to achieve it. Regarding the detailed The Godfather movie scene decoration on the watch’s case idea, Jacob & Co. did not initially know how to achieve it. The company tried hand-engraving and other ways to recreate the incredible detail necessary. The company’s technical department eventually determined that new forms of multi-axis laser engraving would be worth a shot. And no one has used laser engraving for this level of detail and on a curved surface before.

Modern forms of laser engraving are interesting given what can be accomplished. Similar to CNC machine cutting, the promise of the technology is considerable but limited by the knowledge and skill of the operator/programmer. The machines are even responsible for shading. So in addition to cutting away at the metal case material, they can color the metal by making tiny adjustments to the beam’s temperature. Jacob & Co. cannot (for example) simply come up with one-off custom case engraving designs in order to offer customers new forms of personalization. The level of tweaking necessary to get the colors and details correct is considerable. Even once Jacob & Co. was able to work a satisfying aesthetic for the laser engraving, actually engraving each 18k gray-gold case reportedly takes about 30 hours.

Why 18k gray/white gold versus rose gold? Jacob loves rose gold, so many of his gold watches are in that shade. The Opera Godfather 50th Anniversary watch, however, has a case that is produced from some 18k rose gold segments, and also 18k gray gold for the middle section. This is because the detailing and shading from the laser engraving work better on this color of gold at this time. That said, expect to see a lot more laser engraving of this quality on future Jacob & Co. timepieces, as well as, I suspect, high-end watches from competitor brands. This isn’t the first time Jacob & Co. has been a trendsetter, and I suspect that sophisticated forms of laser engraving will have a major role to play in many of tomorrow’s decorated watch cases and dials, especially given how most of the effects achieved are quite different from what you get with hands-engraved cases. To put the complexity into perspective a bit, this laser-engraved version of the Opera Godfather watch costs about $130,000 USD more than the similar Jacob & Co. watch without the case side engraving (where the case sides are fitted with sapphire crystal windows). 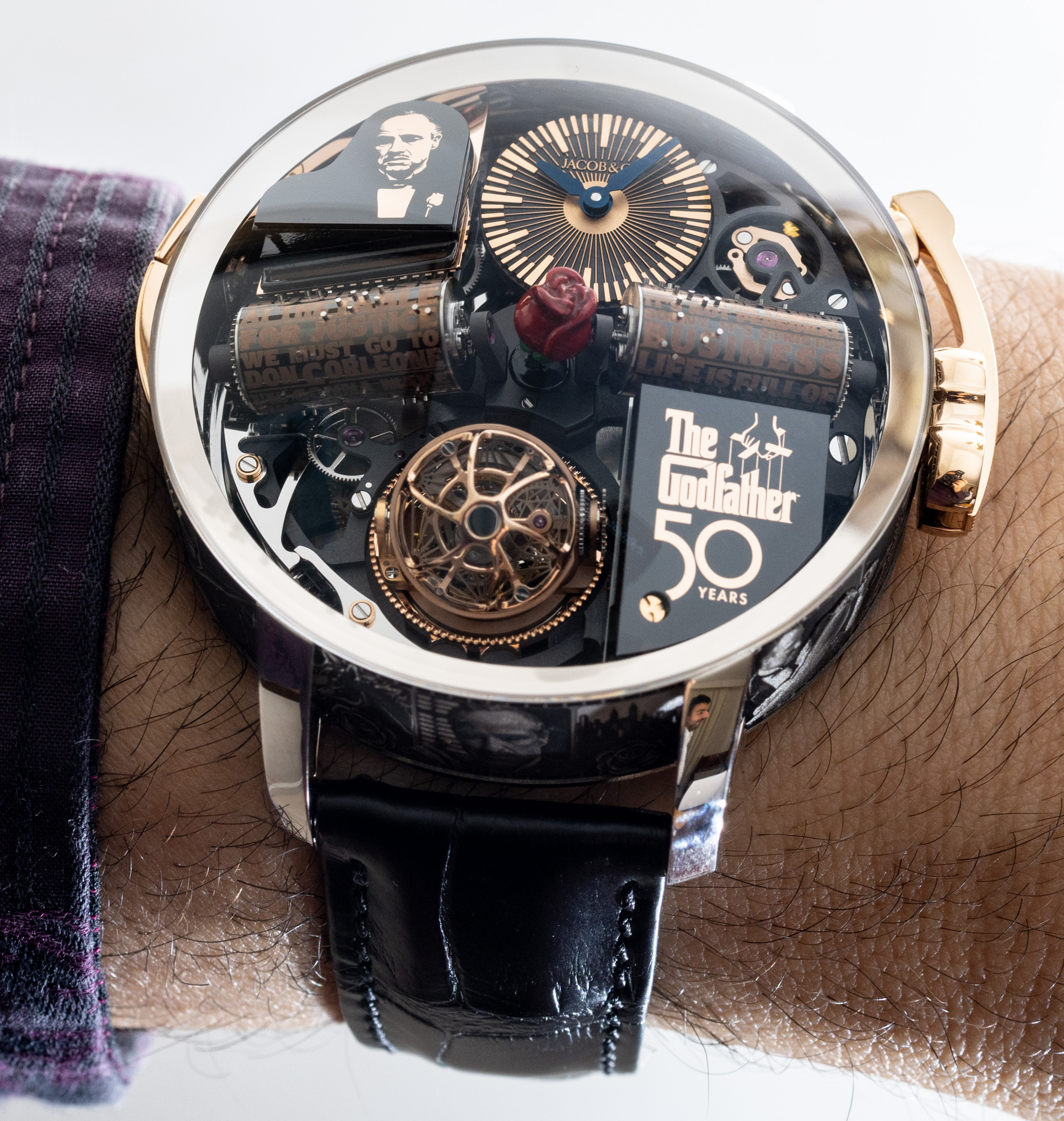 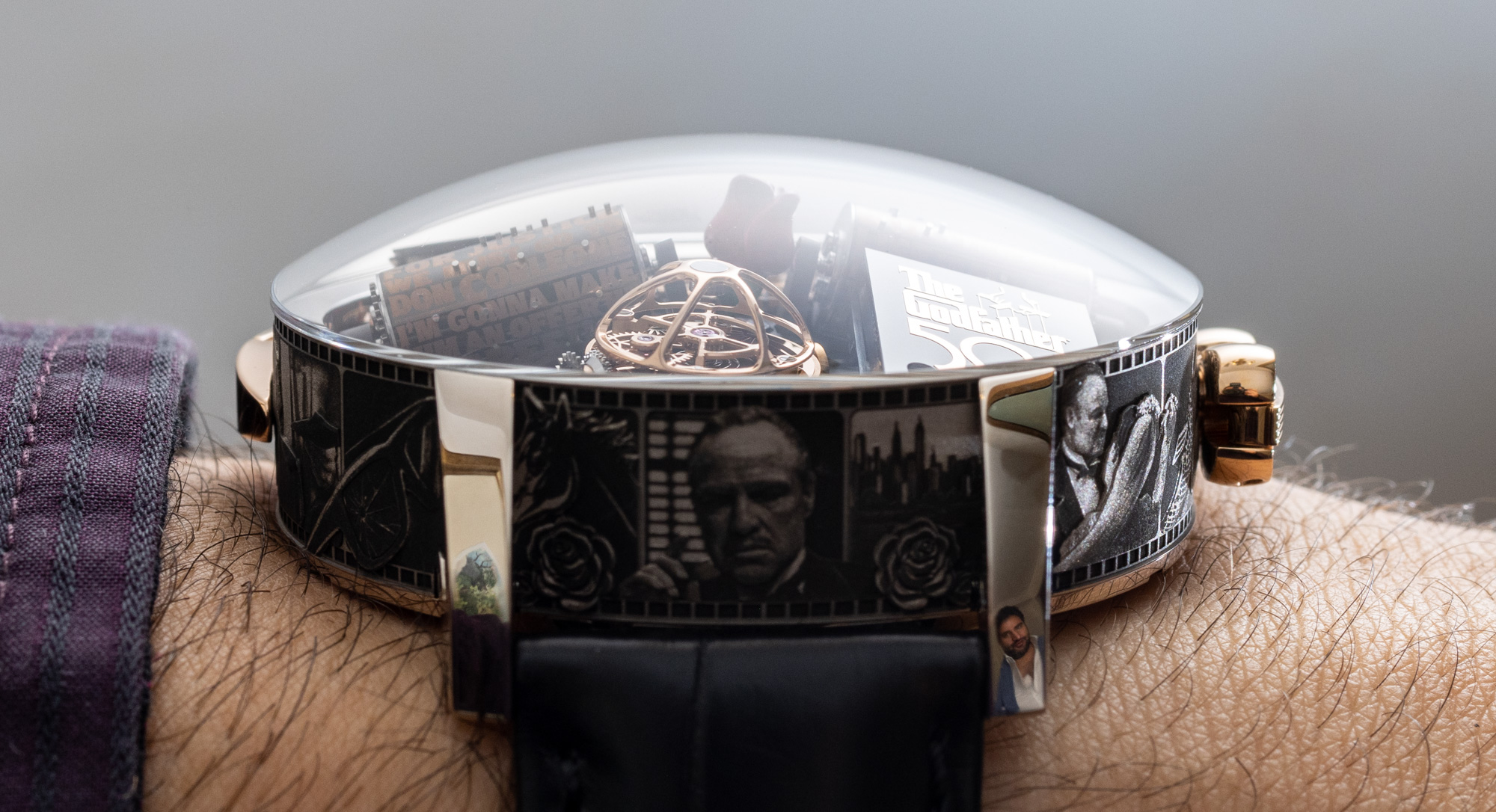 On paper, the Jacob & Co. Opera is a very large watch, but it actually wears pretty well given the size. Jacob & Co. learned quite a bit from the popular Astronomia collection (which has a similar shape), and despite the bulbous shape, the case wears comfortably due to its short lugs, flat caseback, and relatively efficient use of space. Best of all, reading the time is not all that challenging on the otherwise densely detailed dial.

When you aren’t using the Opera timepiece’s music box to listen to The Godfather theme, you can admire the flying triple-axis tourbillon visible on the dial. As the name implies, the watch features a rare tourbillon system that rotates on not one, but three axis points. Does this significantly assist with horological performance? No, not per se, but it is technically very impressive. The impetus for buying a multi-axis tourbillon is really about the visual pleasure of it, hence why someone would design a tourbillon with an axis inside an axis, with each spinning at a different rate. The manually wound exclusive caliber JCFM04 movement is otherwise straightforward in its performance and operates at 3Hz with 42 hours of power reserve. 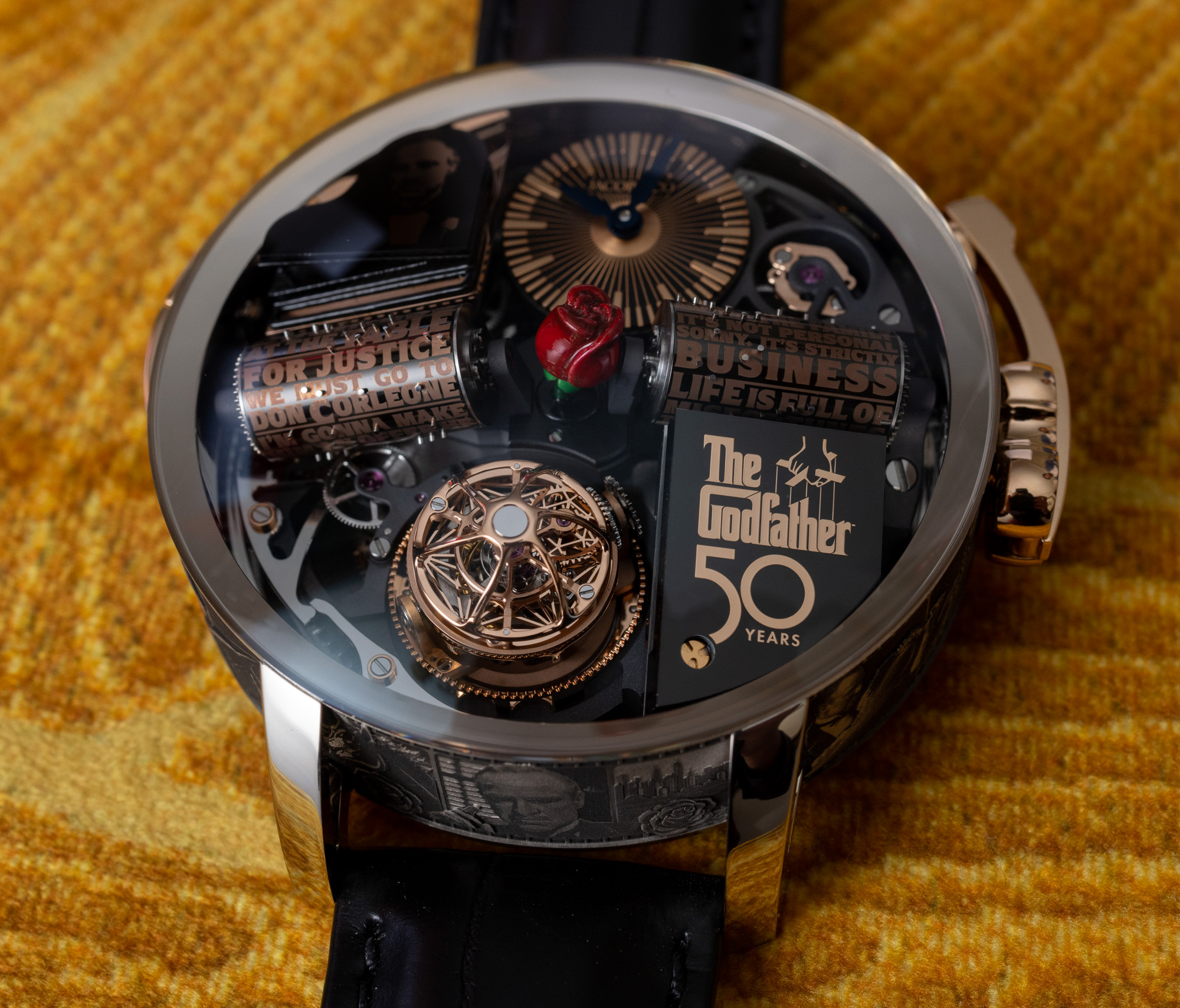 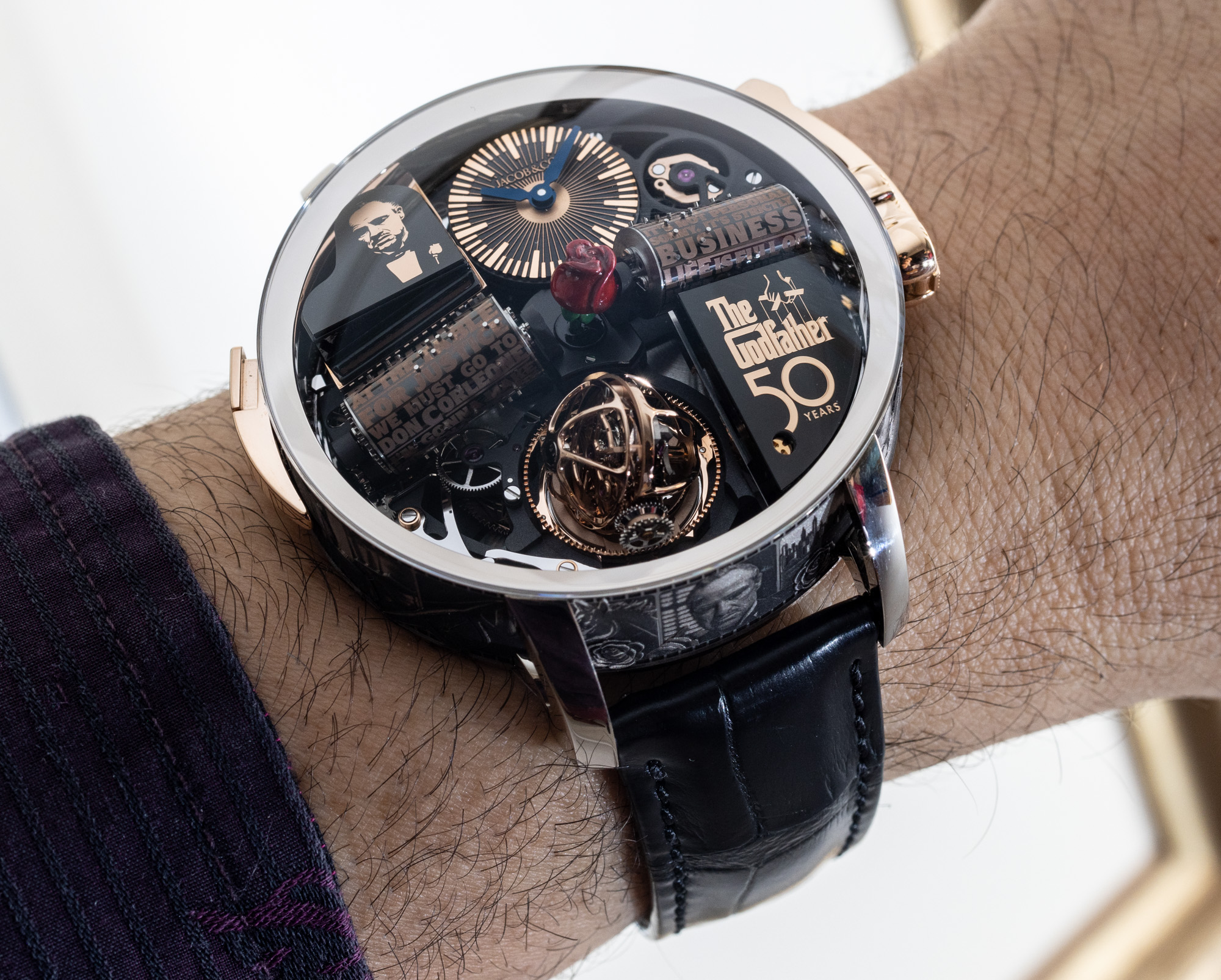