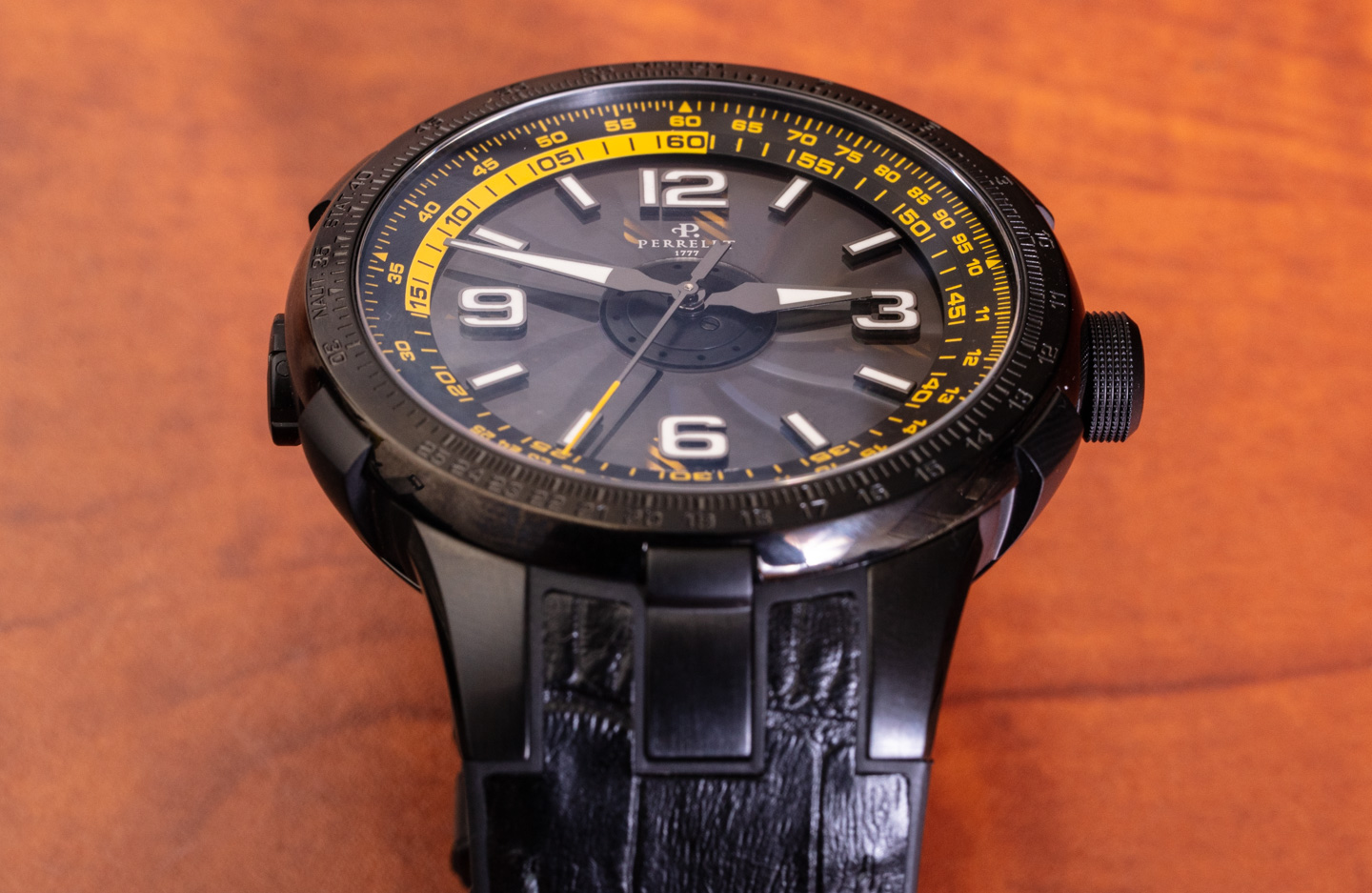 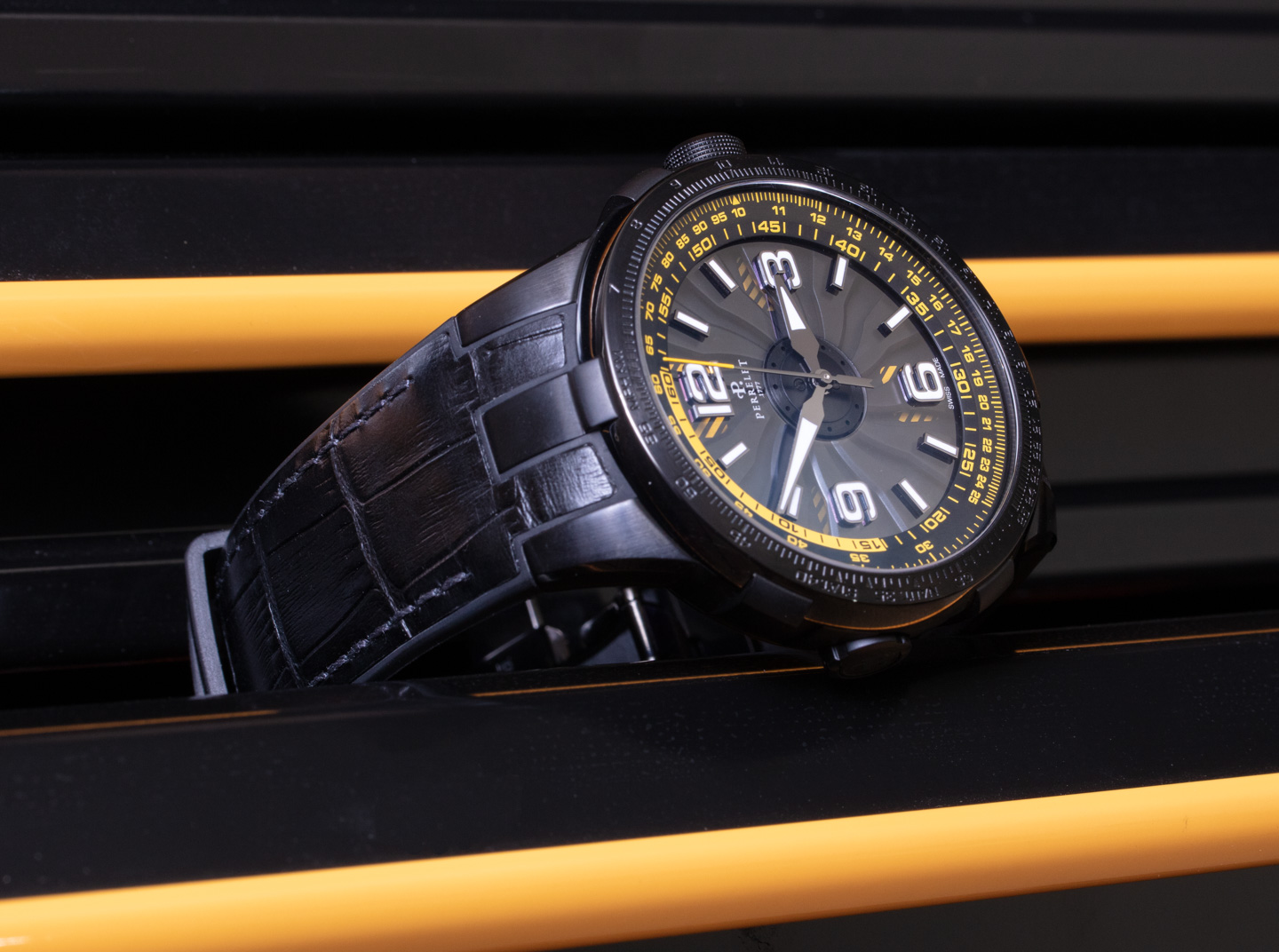 It was back in 2009 when aBlogtoWatch first debuted the original Perrelet Turbine watch collection. The whimsical spinning-dial-based timepiece was a hit for the brand, which, at the time, was undergoing a major visual refresh and semi-rebranding. Perrelet is a high-end brand that is part of the Spanish Festina group. (The same entity also owns the Swiss movement maker Soprod.) Perrelet’s initial success with the jet engine-inspired Turbine watch collection birthed numerous versions and editions, including this Perrelet Turbine Pilot, which originally came out in 2014 (aBlogtoWatch hands-on here).

The watch is a whimsical tool timepiece that sits prominently on the wrist in a 48mm-wide case. It is comfortable despite the broad dimensions given how the PVD-coated black steel case has a nice flat back with wrapping lugs, only I prefer the watch on a traditional pin-buckle strap clasp. The watch comes on either that or the pictured folding deployant strap — which I find to be a bit too sharp and bulky for my taste. 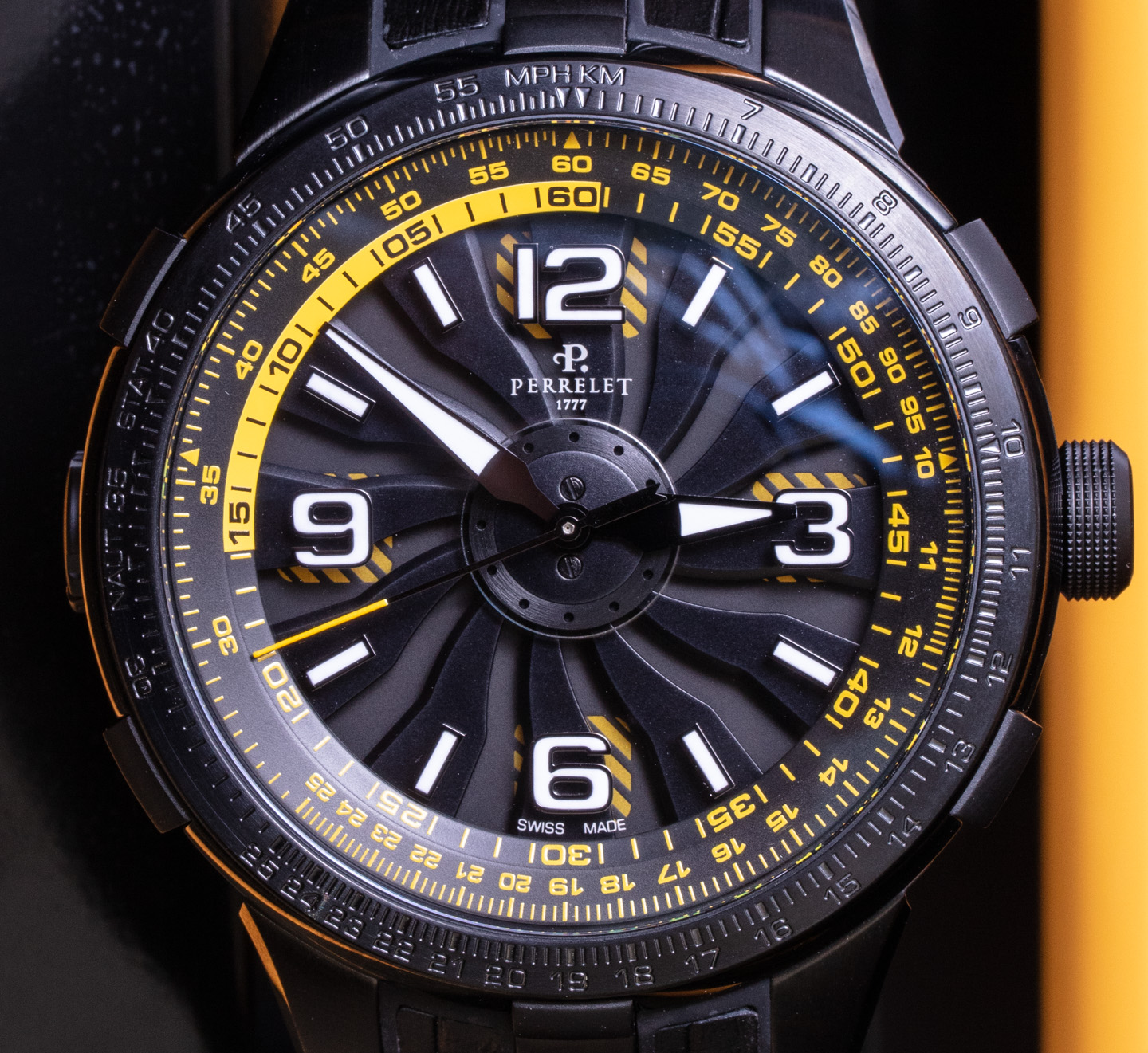 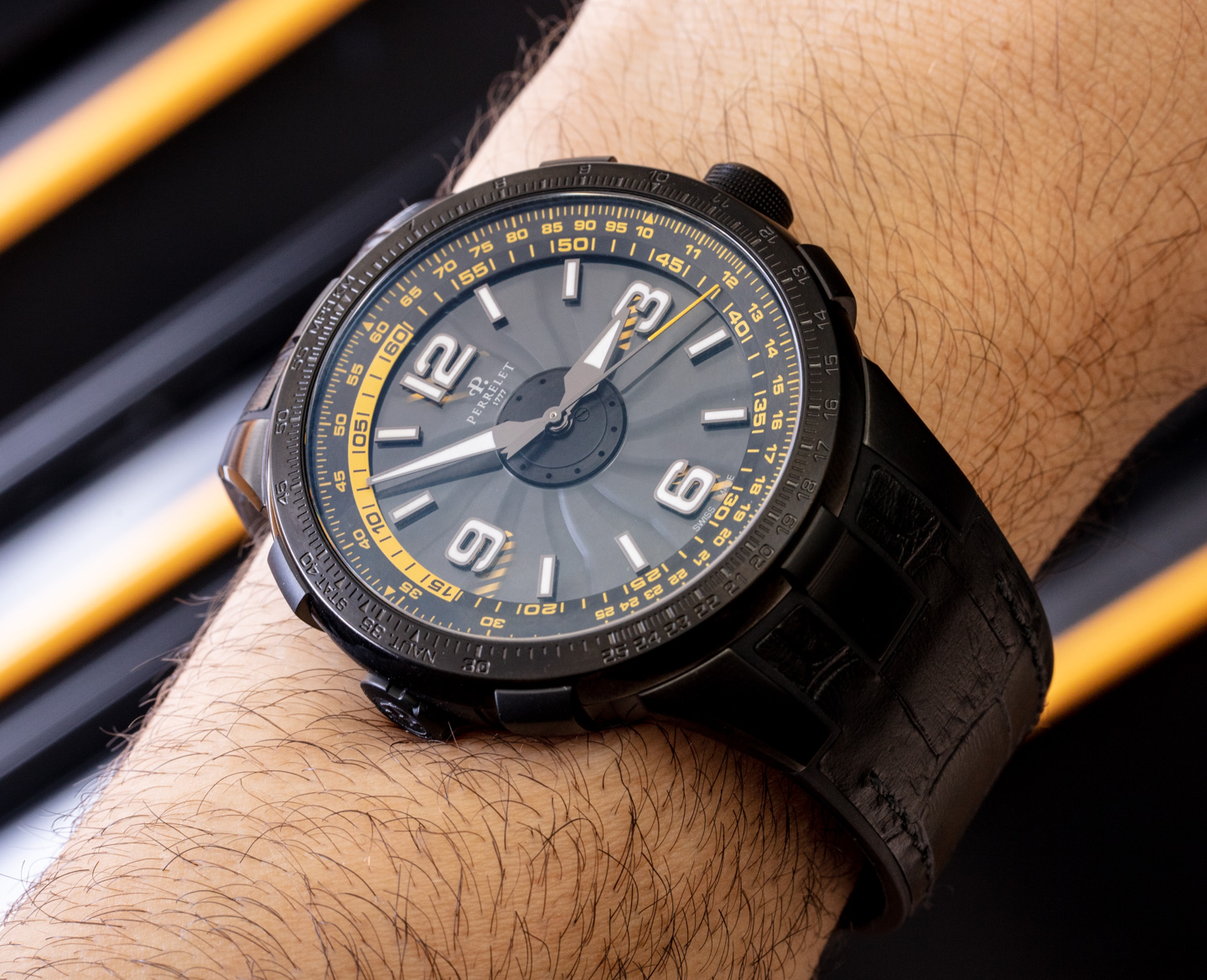 The strap itself is actually really nice. It is mainly black rubber with an inner leather liner that has a passable alligator print on it. The 13.48mm-thick case is sporty in style but only water-resistant to 50 meters (as is the case with many other pilot watches). Over the dial is a wide sapphire crystal that is domed and AR-coated (with surprisingly very little visual glare, as a result). Over the movement is another sapphire crystal exhibition window.

Even though it is now neo-vintage, the Turbine case has aged well. It still looks like the bowl-shaped mouth of an airplane jet engine and has that fun little fold-out crown turner that might not be super useful, but is nevertheless fun to play with. Oddly, the Turbine Pilot watch version of the Pilot more or less negates the semi-flush look of the fold-out crown concept by playing a second traditional-style crown on the opposite side of the case. On this watch, the crown on the left side of the case is used to widen and operate the movement, while the crown on the right side of the case unscrews to allow for turning off the internal slide rule bezel. Indeed, to make this a “proper” pilot’s watch, Perrelet decided to include a complication that the timepiece world only associates with aviation, and that, of course, no one has actually seriously used in a few decades. 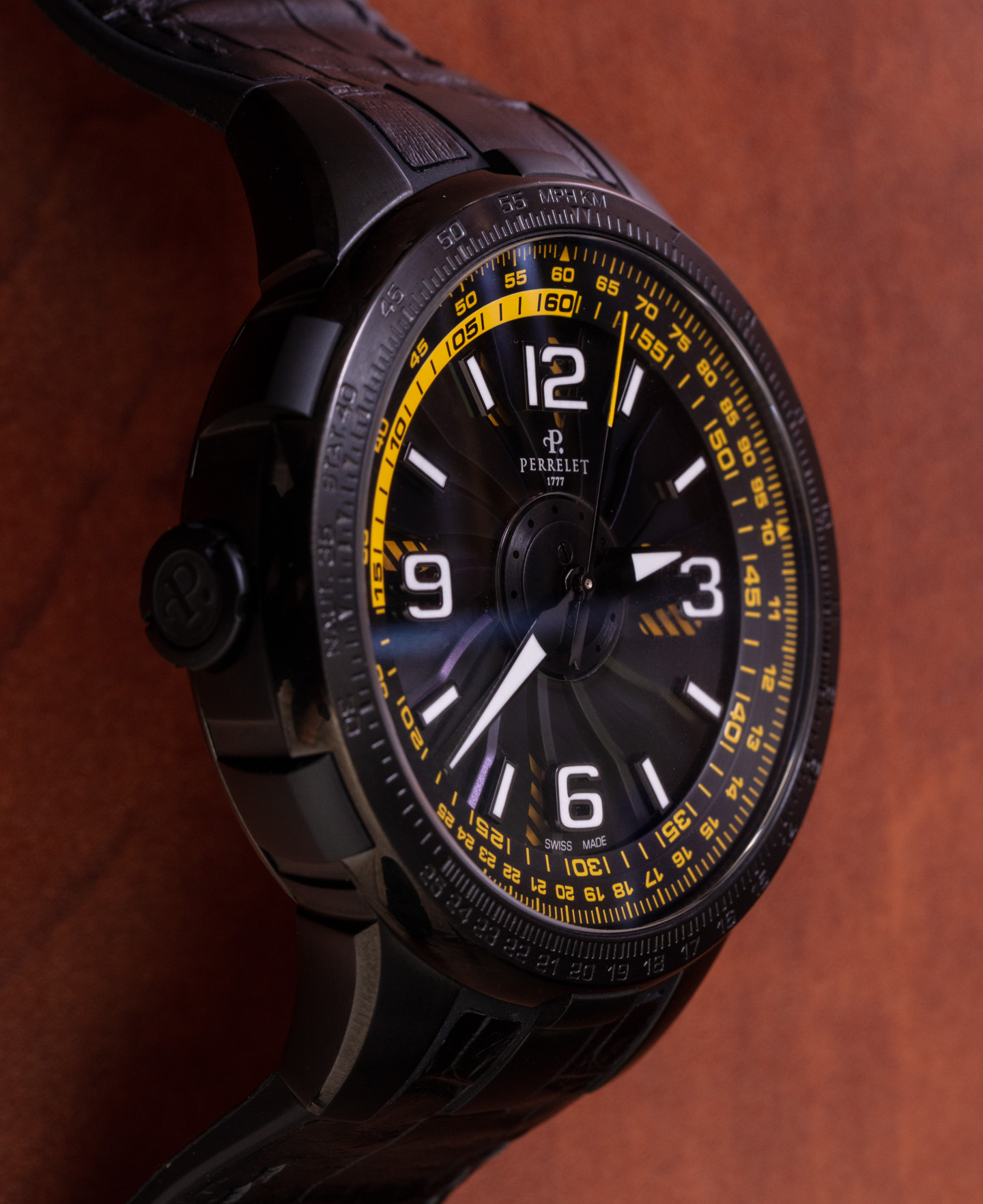 For what it’s worth, unscrewing the inner bezel crown and spinning around the inner slide rule bezel is nearly as fun as watching the rotor-mounted dial turbine spinning in action, though for most people, it will prove to be just as utilitarian. The dial is, however, really nice to look at with its sober reference A1095/4 black and yellow hues that make it feel much more serious than it actually wants to be. The transparent sapphire dial is a great design element, as the hour markers are applied to it — spinning under it you can see the rapidly moving turbine rotor blades. Optically, you actually don’t see too much difference if the dial rotor is spinning or not (though it is more apparent on other color styles of the Turbine Pilot), but playing with it is still fun — though it spins almost too efficiently. 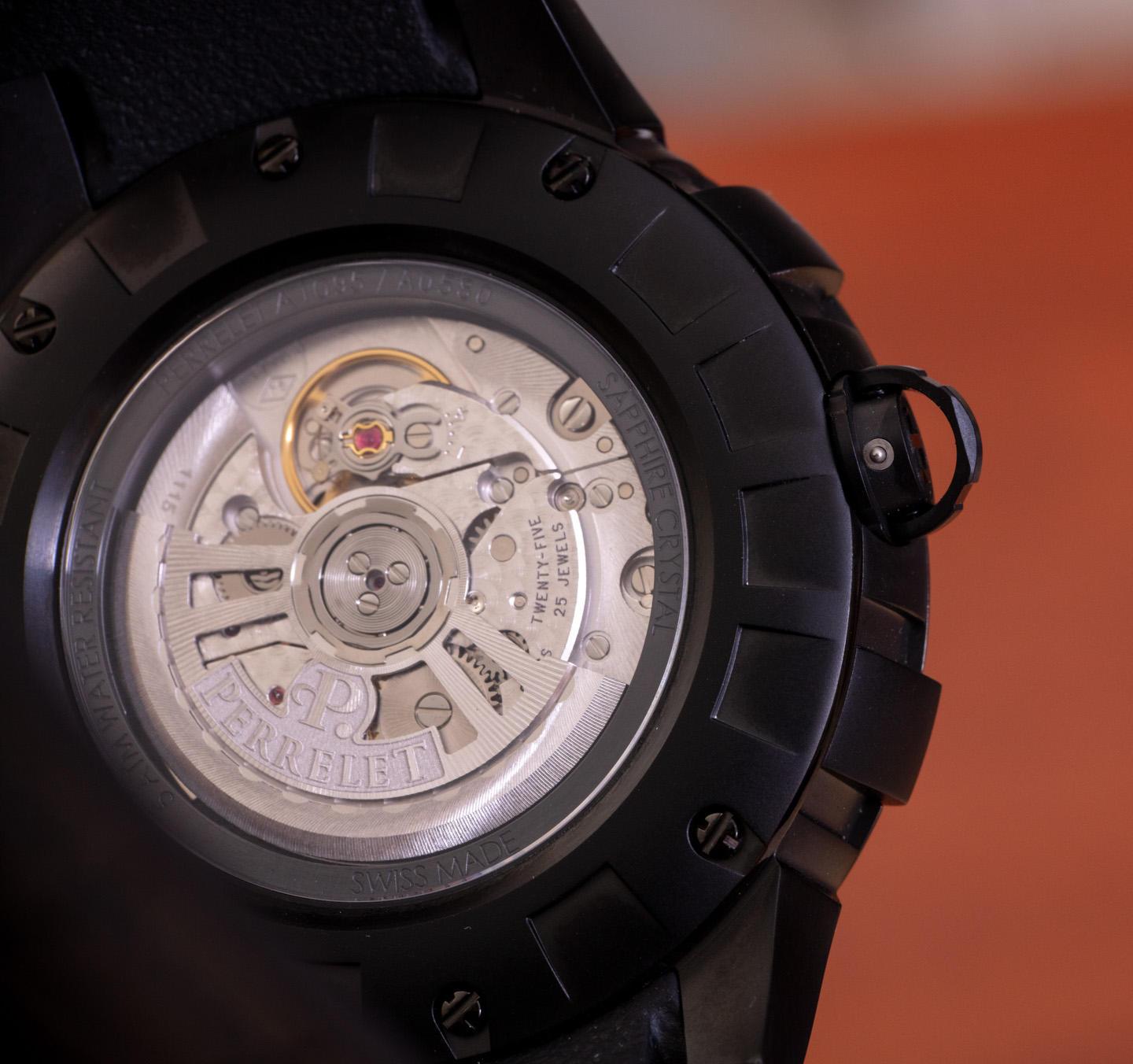 Where did this silly spinning dial concept come from? To answer, you need to look back in Perrelet’s history when it made double-rotor watches for winding efficiency, but with an extra automatic rotor on the dial. In the mid-2000s, I believe it was Swiss-based designer Sebastien Perret who adopted the dial rotor concept for Perrelet into the Turbine collection. I don’t think the dial rotor is functional any longer (in terms of winding the automatic movement), but it does evoke the history of the double-rotor automatic watches and matters most in regard to offering a stimulating visual animation experience when looking at the dial.

Inside the Turbine Pilot watch is the in-house caliber P-331-MH automatic movement produced by group company Soprod. It features the time with central seconds and operates at 4Hz with 42 hours of power reserve. As bonus features, the movement (visible through the rear of the case) isn’t bad-looking with some attractive decoration and a special Perrelet engraved automatic rotor. The second bonus feature is that the movement is COSC chronometer-certified for accurate performance. Accordingly, reading the time via the dial is actually a very straightforward and legible experience. 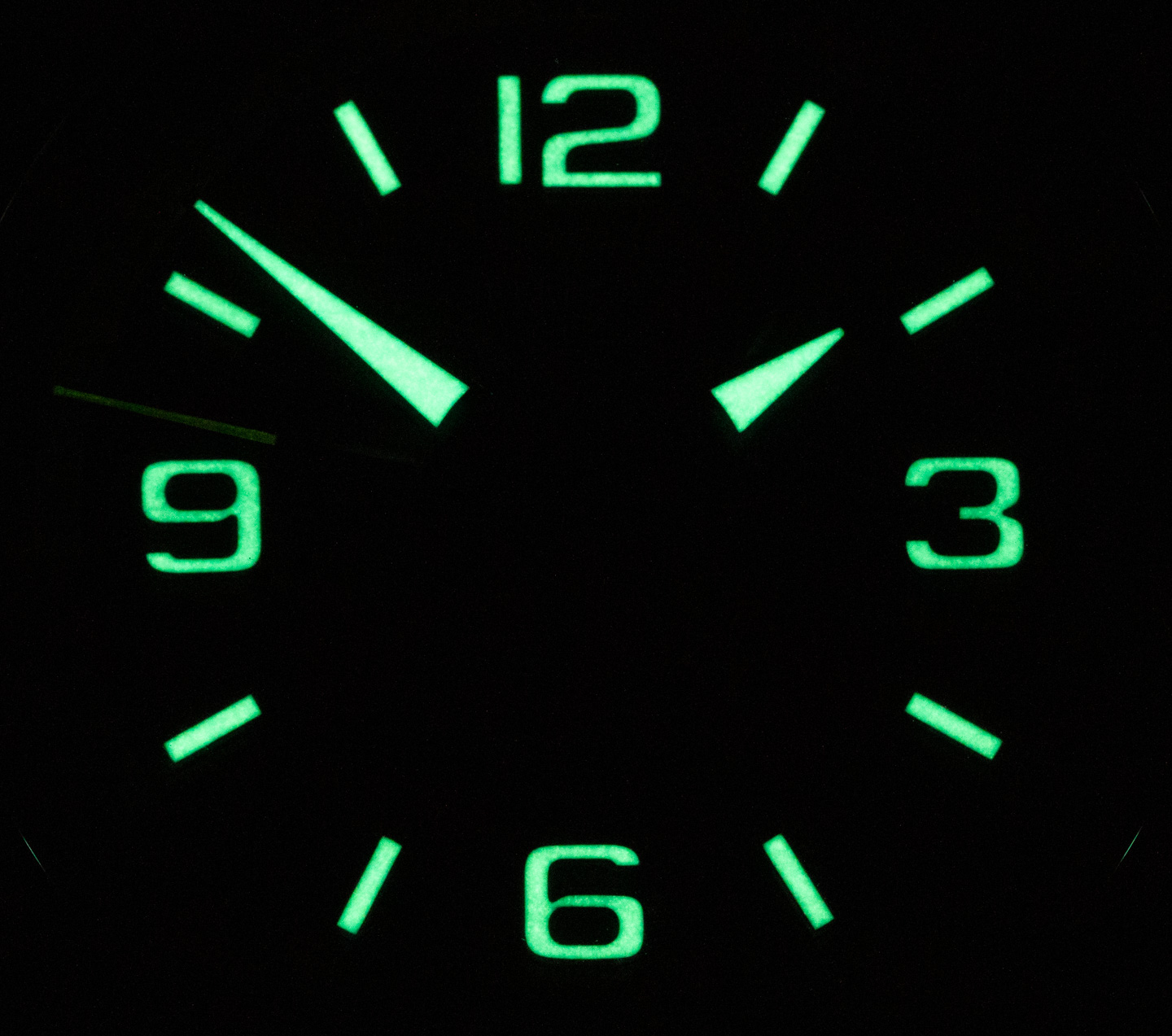 The Perrelet Turbine collection is still among the few “fun” watches that can still sometimes pass for more conservative tool watches. You do get a very capable movement and legible dial — that is true. On top of that, you have a bunch of spinning and turning toys to help embellish the experience. It’s all very much part of the Mediterranean core of the brand. While I do advocate that people wear this watch on the simple buckle, the large-size case is comfortable as a pleasantly plump check-me-out timepiece, without being unpleasant to have on.

For over 10 years now, Perrelet has nurtured the Turbine collection, and it still remains an important icon for the company. You have to admire the sheer variety of watches in the Turbine collection, ranging from limited-edition Hentai-themed models to aviator versions like the Turbine Pilot. It might not be the most serious tool watch available on the market, but it makes up for that in playful energy that is well-composed, in addition to giving off a lot of original personality. I actually think more people want the courage to wear a Turbine watch into a room than those who actually have the courage to do so. It’s a bold watch for the bold, and that’s what Perrelet is good at doing, these days. Price for the reference A1095/4 Turbine Pilot watch is 4,980 Euros. Learn more at the Perrelet watches website here.