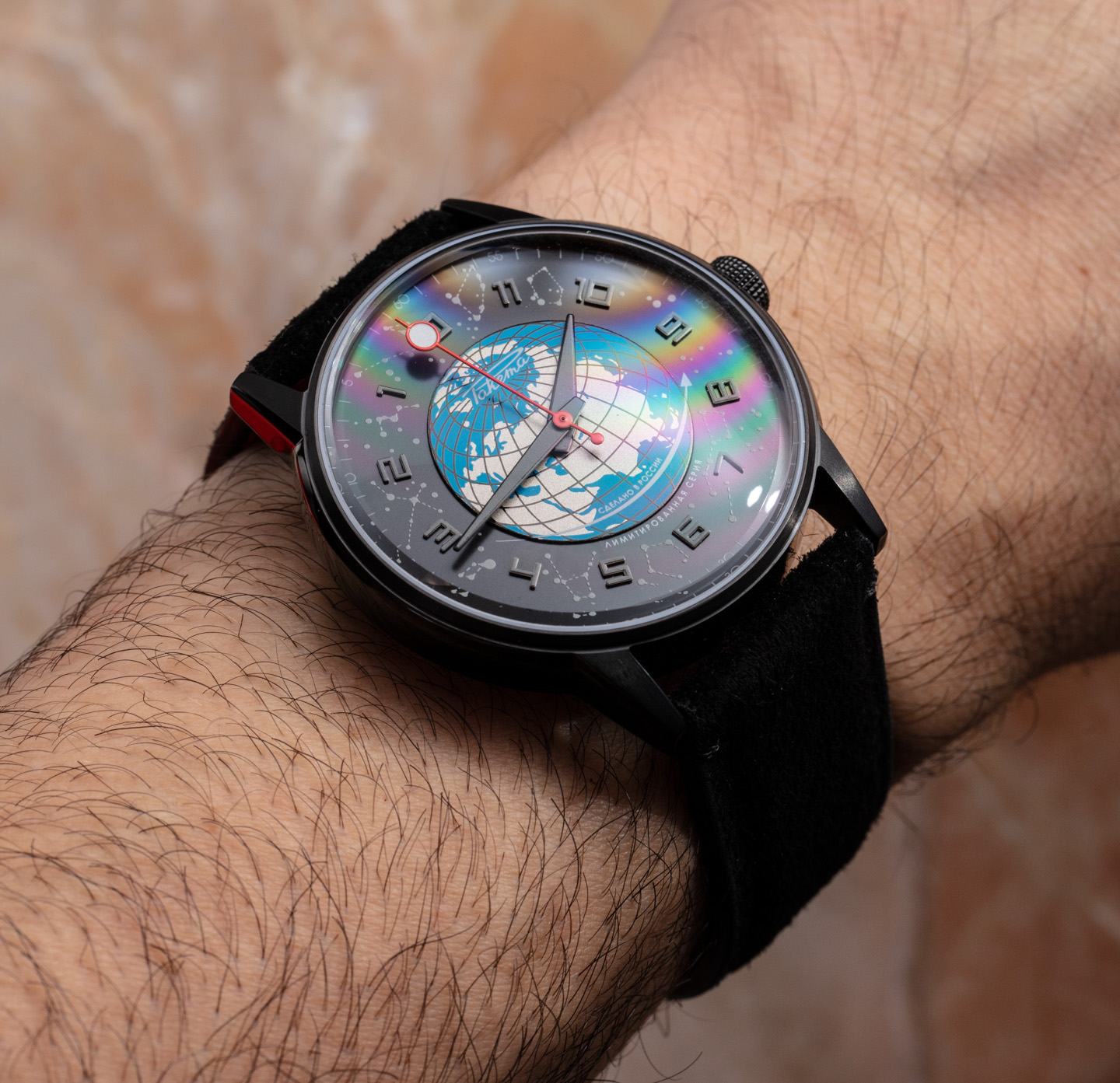 At a glance, the new limited-edition Raketa “Russian Code” watch seems like an expected product from the legacy St. Petersburg-based Russian watchmaker. It has a vintage Soviet-era theme with a nod to the brand’s military and scientific equipment history. The Raketa Russian Code was debuted on aBlogtoWatch here. The glossy black case has a dial featuring a globe of our planet, as well as a series of constellations scattered between the applied hour markers. It’s a pretty nice looking, if not baroque, dressier watch. And then you notice that the hour markers and hands go in the “wrong” direction.

While not the first watch to do this, it is not common for timepieces to have dials that run counterclockwise. Clocks so consistently have hands that turn in one direction versus the other, the term we use to describe this motion is “clockwise (or rather, “as the clock does”). Counterclockwise by contrast is by nature the opposite of what a clock does. To produce a timepiece that runs in this direction is not only poetic, but it is remarkably rebellious when it comes to attacking the preconditions most people have about the way things operate. 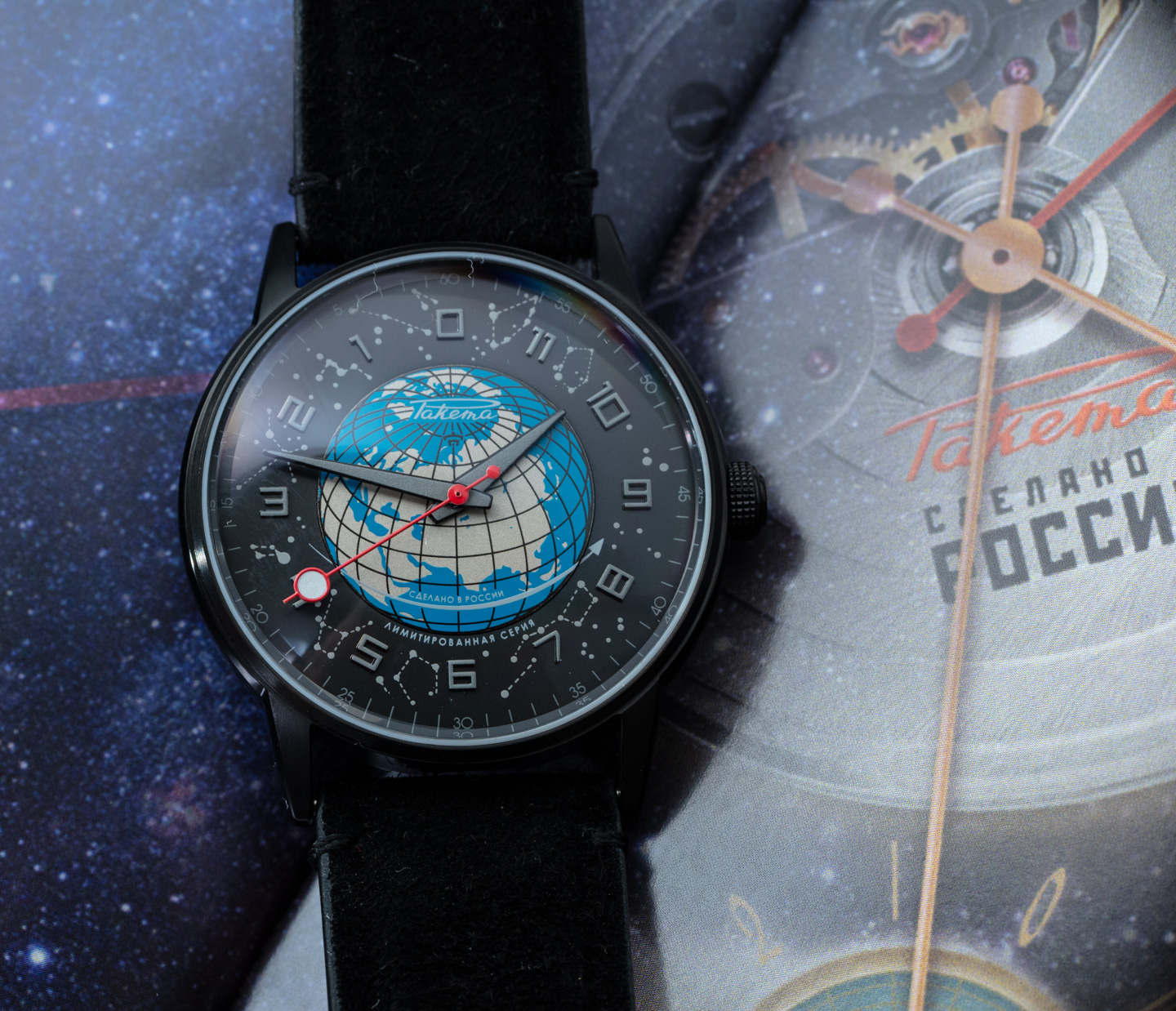 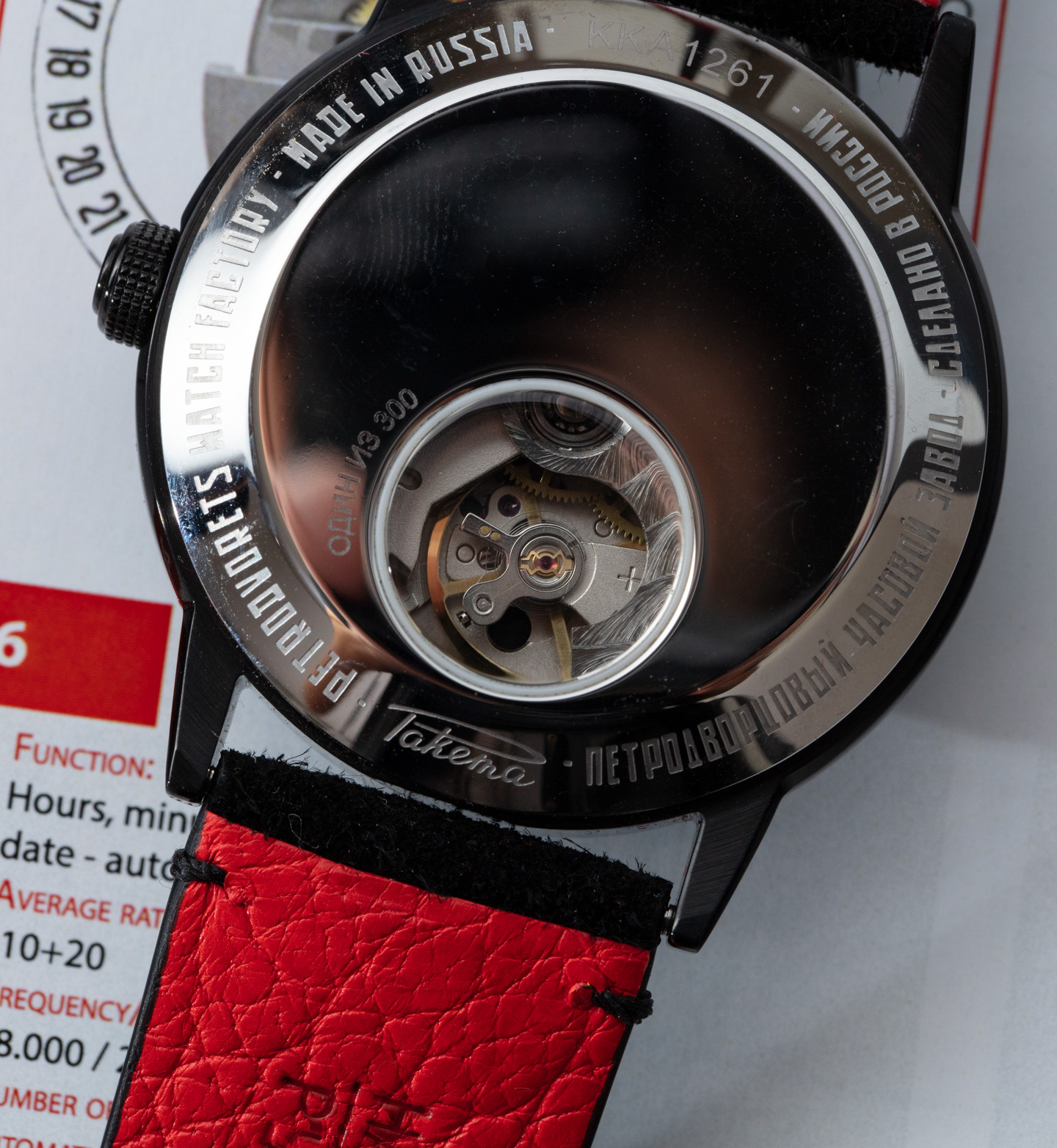 Dig deeper and you see a bit of Russian humor and wit. That the wristwatch runs counterclockwise is, no doubt, cause for cognitive dissonance. Notwithstanding the potential headache when reading the time, the watch does perform its core task of reading the time — just differently. The watch knows how to mess with your mind but still performs its function as a timekeeper. That’s clever in a sort of devious way that I think only truly intellectual brands can get away with. Accordingly, the Russian Code exists within Raketa’s “Curiosity Watches” collection.

To add storytelling to the context of the Russian Code watch (that also happens to come in a gold-tone case 0275 version with a slightly more classic dial), Raketa explains that the inspiration for the anti-clockwise (as it is sometimes called) motion of the hands is the anti-clockwise motion of the planets around the sun. If the planets revolve around the sun in a counterclockwise manner, and all of timekeeping history is based on celestial observations, then why not make a wristwatch that celebrates this fact? And for this intellectual exercise, we have the Russian Code by our deep-thinking friends at Raketa. Don’t miss how the extra-large lume-point at the end of the seconds hand is meant to represent the moon, predictably moving counterclockwise around earth on the dial. 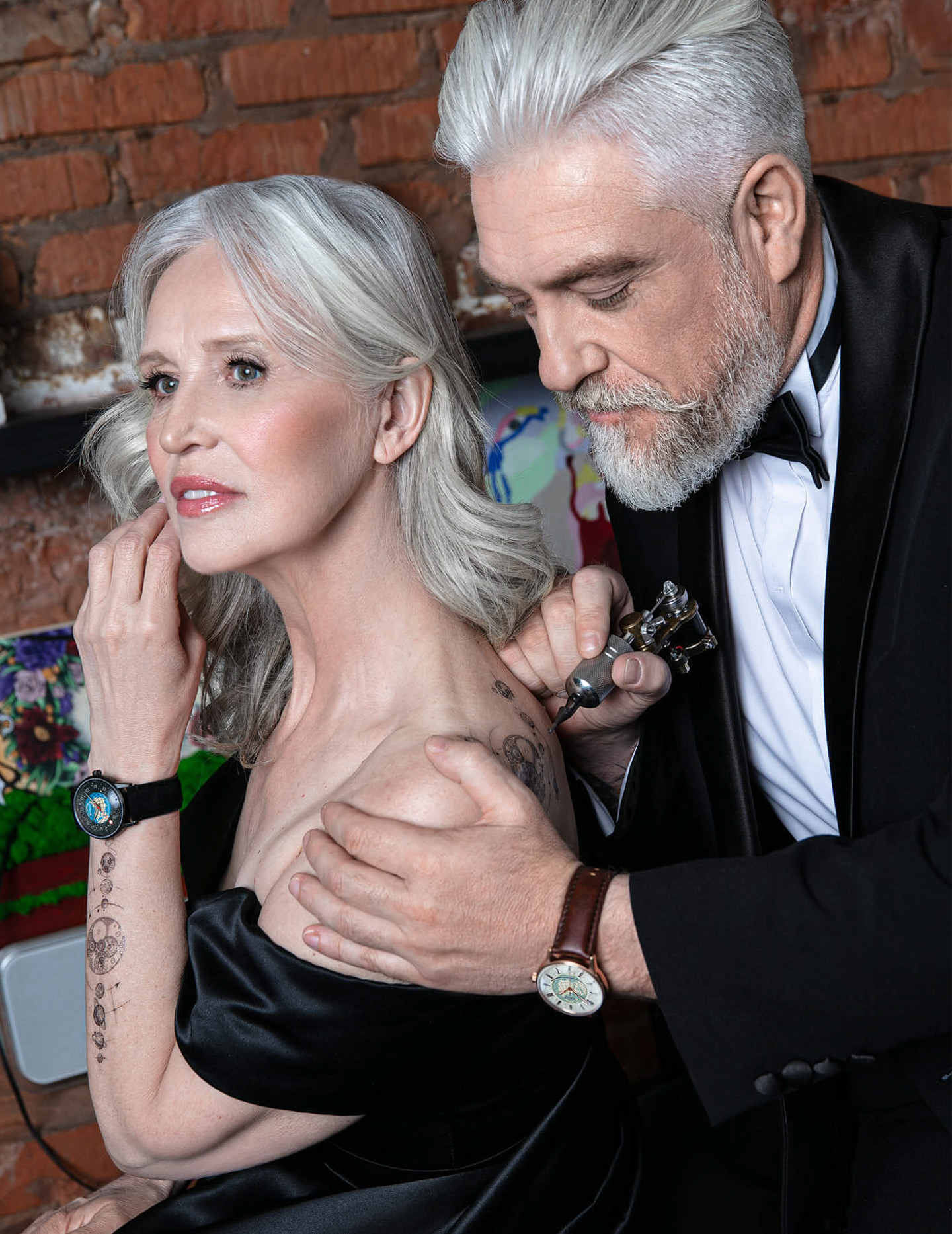 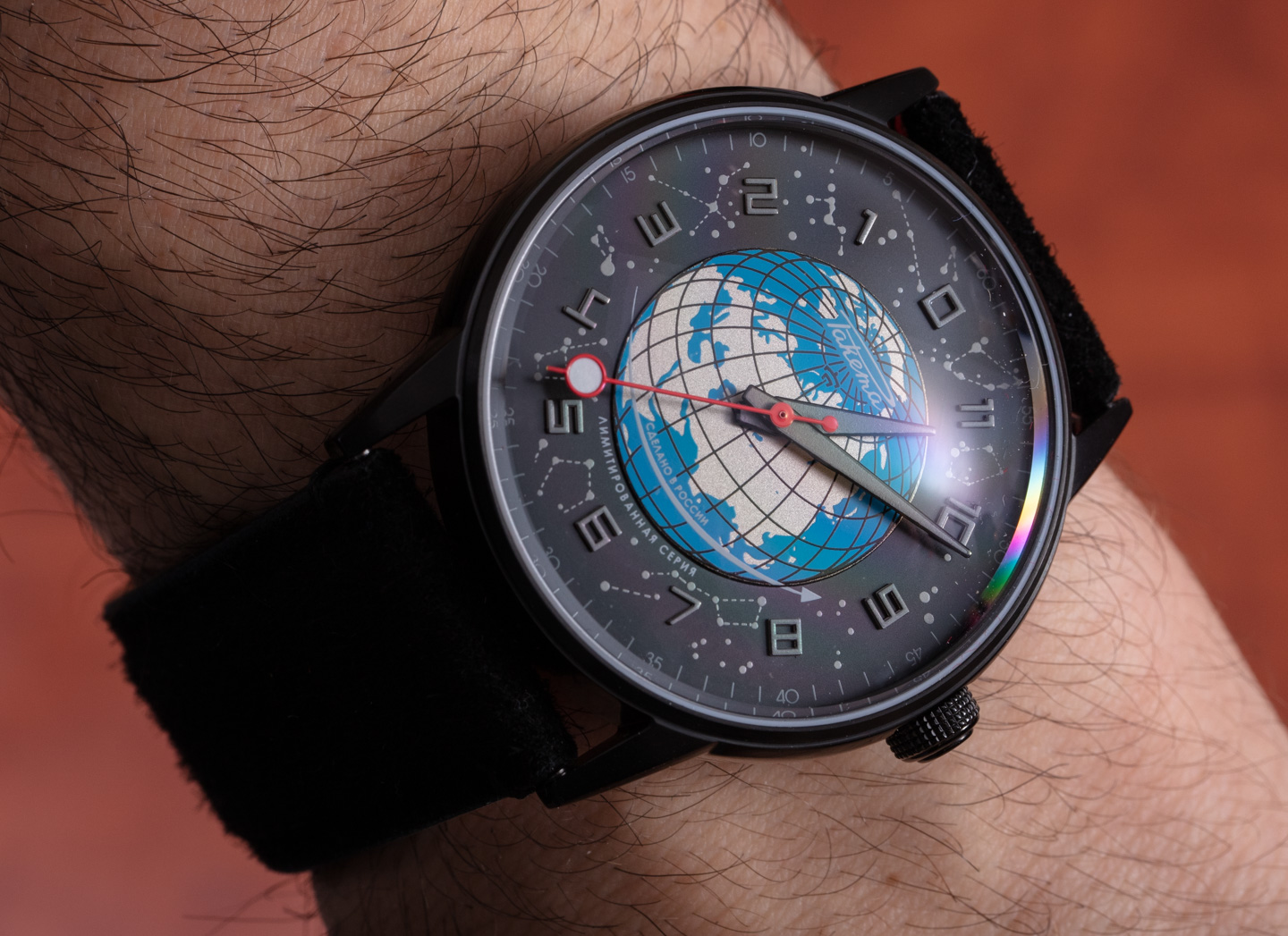 Raketa has also been known to commission some interesting photoshoots to show off some of its new products. I really like it when brands take these extra steps to create personality and context around new products. On the Russian Code 0276 product page, one image shows up from what must have been a full-on shoot for the two limited-edition Russian Code 0275 and 0276 watches. They are certainly are trying to be more artistic than pragmatic, which I appreciate — though aside from the tattoos, which express the celestial counterclockwise and watchmaking theme, I’ll let you try to figure out what Raketa was going for here. Or this might have just been a well-timed photograph at a recent Raketa employee dinner party. Who knows?!

The Russian Code watch itself is 40.5mm-wide in steel with a polished black coating. The distinctively chubby case is 16.55mm-thick, mostly due to the very domed sapphire crystal and the tapering caseback. Indeed, these watches are strictly thicker than they need to be. But the shape is very distinctive (as I said) and helps you identify a Raketa from across the room. The case also has a very wearable 45mm lug-to-lug distance, and is water-resistant to 50 meters without a screw-down crown. 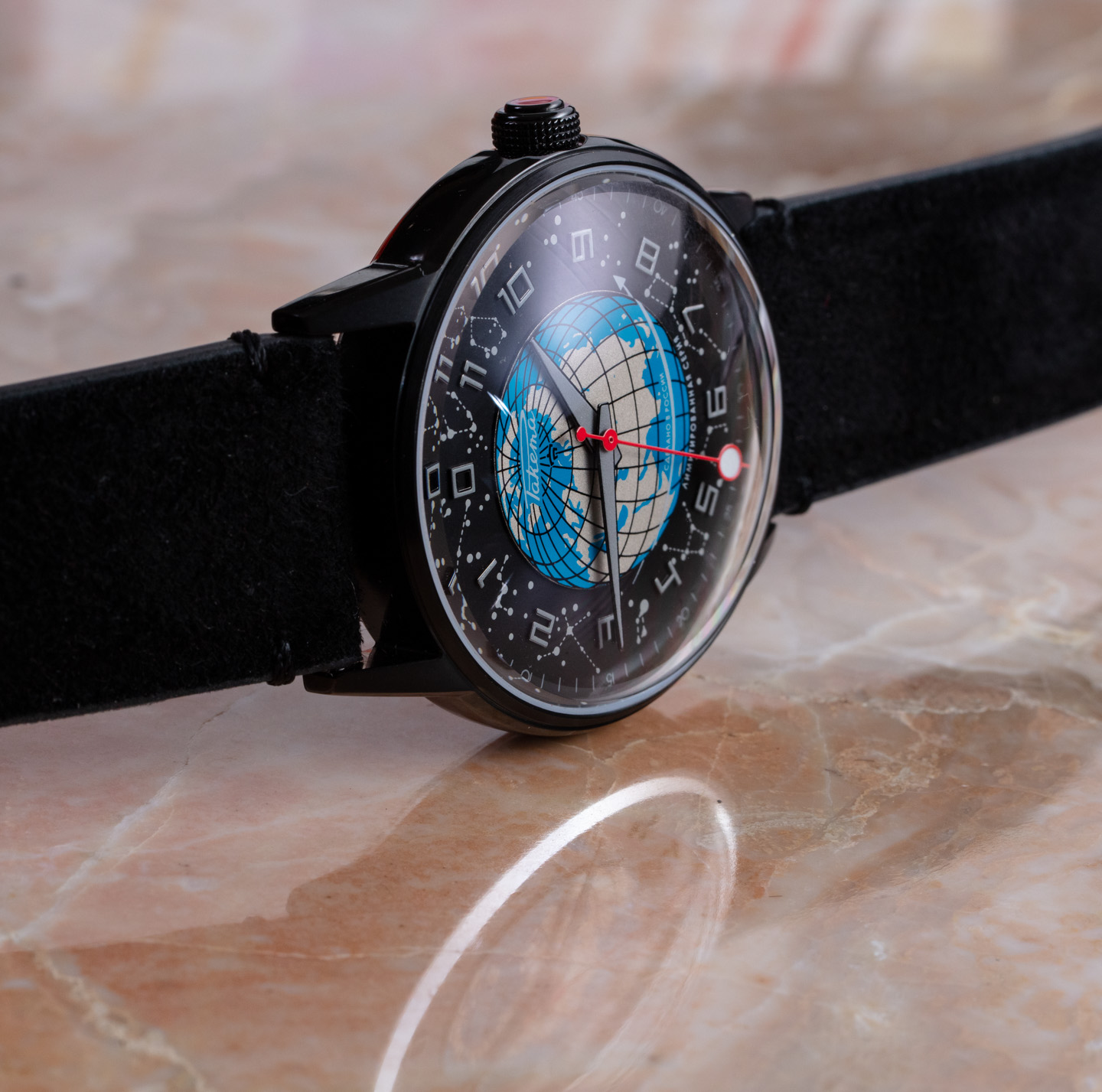 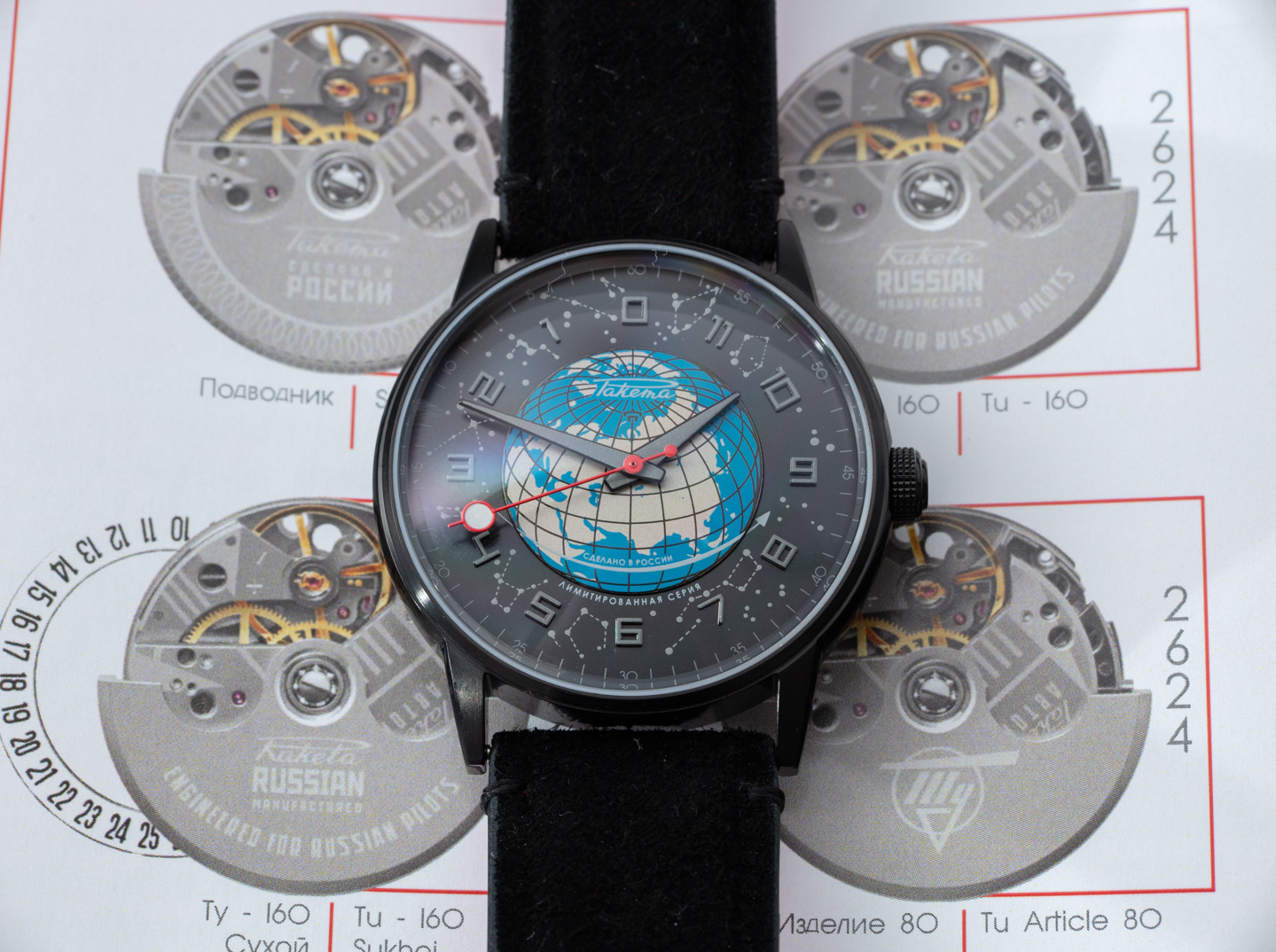 Attached to the case is a black suede strap with a red leather liner. Another hint of red is applied as an insert in the crown. Inside the watch is the in-house-made Raketa caliber 2615R automatic movement. You can see a glimpse of the nicely decorated, albeit “historic” in its performance, mechanical movement through a petite exhibition window on the rear of the watch that is strategically placed over a view of the oscillating balance wheel. The 2615R movement is the “R” (for “reverse”) version of the 2615 automatic that powers many Raketa models. I’m not exactly sure how the gearing was reversed, but I understand the process is not that challenging. Funny enough, when you wind the crown, it now winds the mainspring when turned in the counterclockwise (versus clockwise) direction. The movement operates at a frequency of 2.5Hz (18,000 bph) with a power reserve of 40 hours.

The practicality of the Raketa Russian Code is as the interesting photoshoot picture above implies, and a robust dinner party discussion topic. This wristwatch is for the artsy person who likes to play with intellectual topics more so than impress with designer brands. Sure, you might be able to afford a Swiss name brand, but does your watch also come with a solid 30 minutes (or more) of non-controversial yet interesting dinner table conversation? The same people who wear the Russian Code watch must also be fully invested in the idea of sharing their wrists (and the ensuring remarks) with anyone who inquires, “Do you know what time it is?” Price for this very interesting limited edition of 300 pieces “curiosity” reference W-07-20-10-0276 Russian Code watch from Raketa is 1,450 Euros. Learn more or order at the Raketa website here.