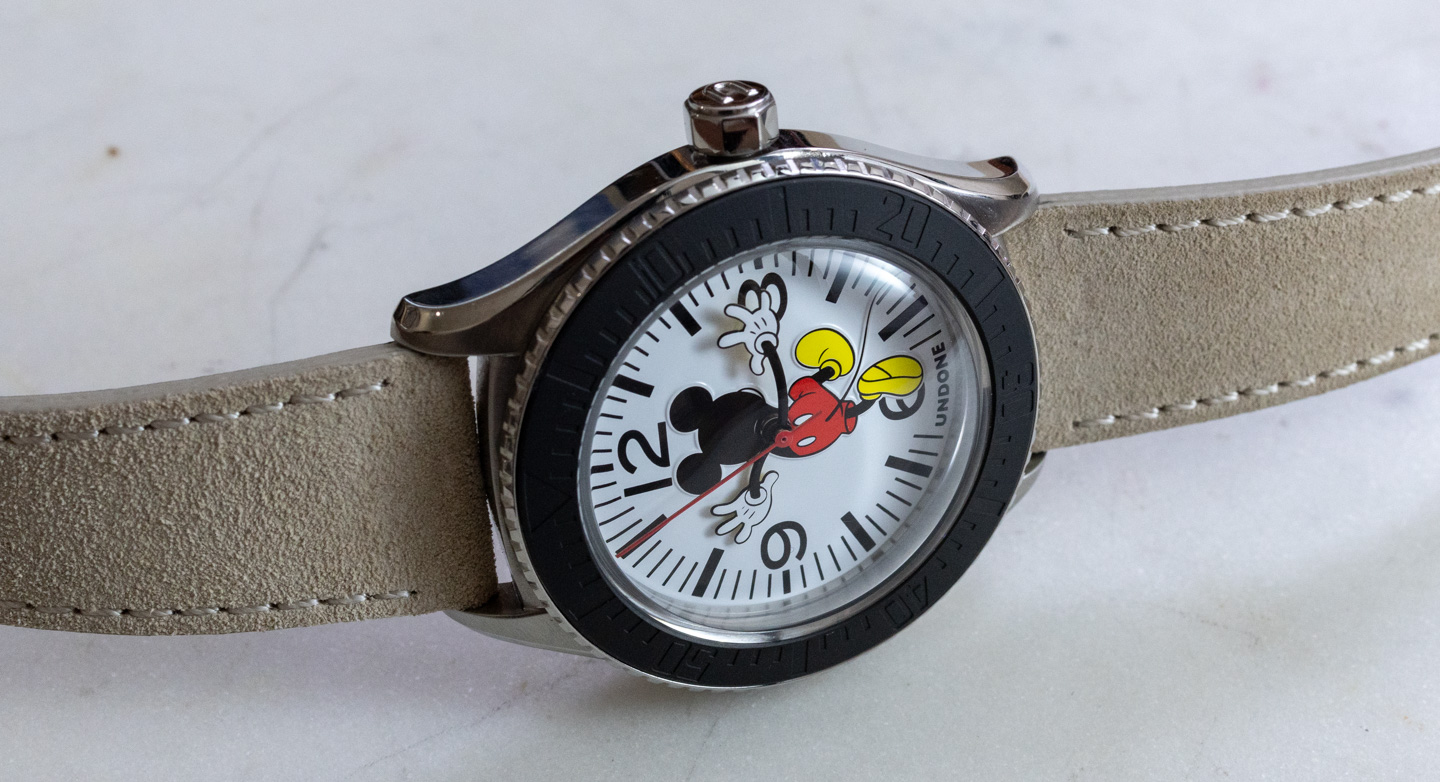 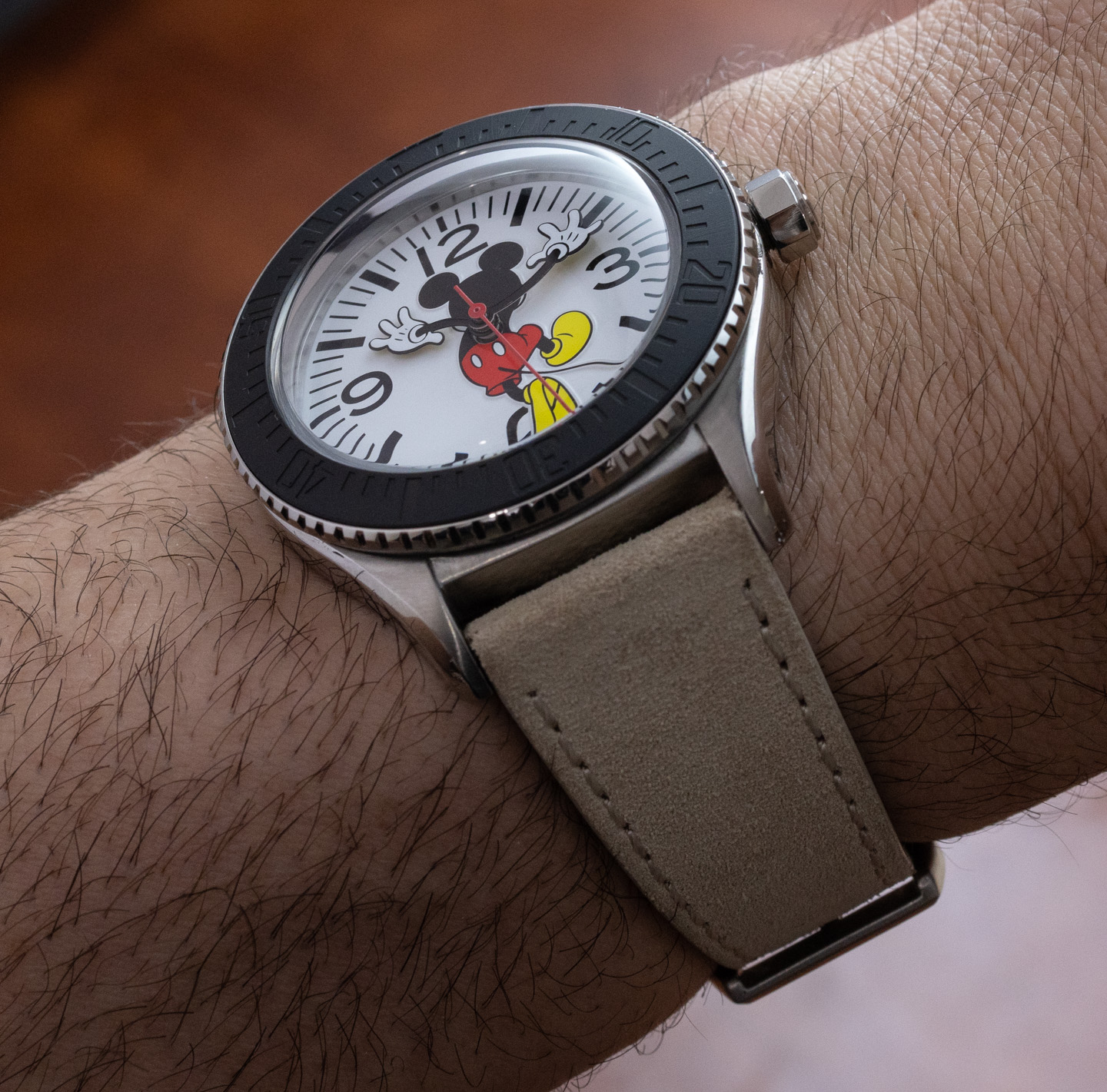 Over the last few years, watch enthusiasts have seen a lot more Disney character-inspired watches and now Hong Kong’s UNDONE has gotten into the mix. The two watches I go hands-on with today are UNDONE’s moving Mickey Mouse hands-inspired “Guess Who’s Back” and the UNDONE Disney Fantasia. Both are interesting watches, the former being a bit more geared toward timepiece enthusiasts while the latter is more geared toward Disney lovers with a focus on the 1940 orchestrated musical film Fantasia.

Disney watches have become much more emergent, as of late. For a long time, the large group that owns the traditional Disney characters, as well as a load of other intellectual property including the Star Wars universe, didn’t seem to care about watches. After a history of making some of the world’s most famous souvenir watches such as clocks and watches with Mickey Mouse on the dial as the hour and minute hands, Disney seemed to stop caring for a few years. Now that has all changed. Its primary watchmaking relationship is with Japan’s Citizen watches, but Disney doesn’t have an exclusive relationship with the brand. Today, we see a large variety of Disney universe watches including those with Mickey Mouse, arguably Disney’s most popular character. So when UNDONE wanted to get involved in making Disney watches, the challenge was to come out with something interesting and novel that wasn’t being done by other companies who have a matchmaking license from Disney. 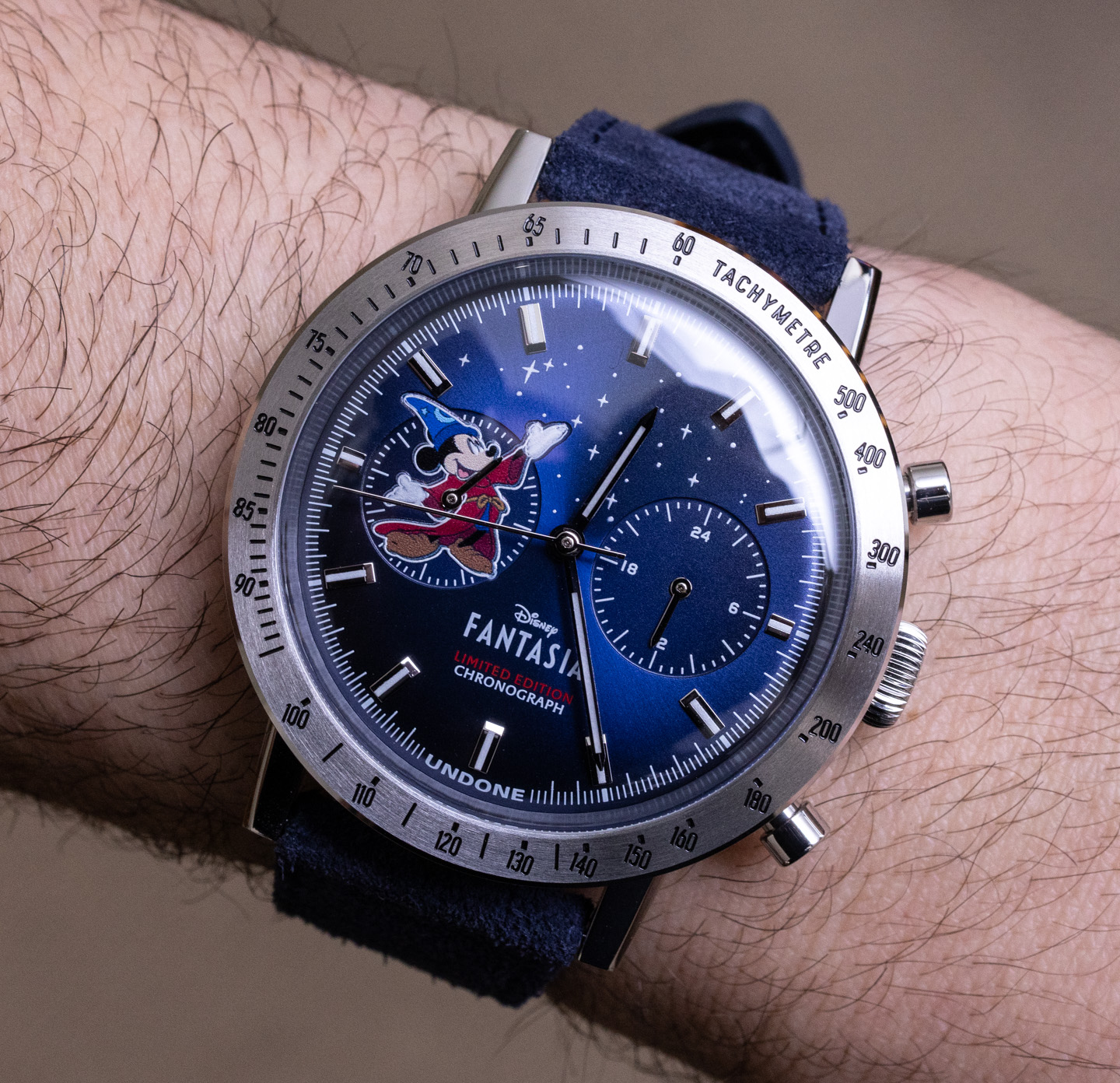 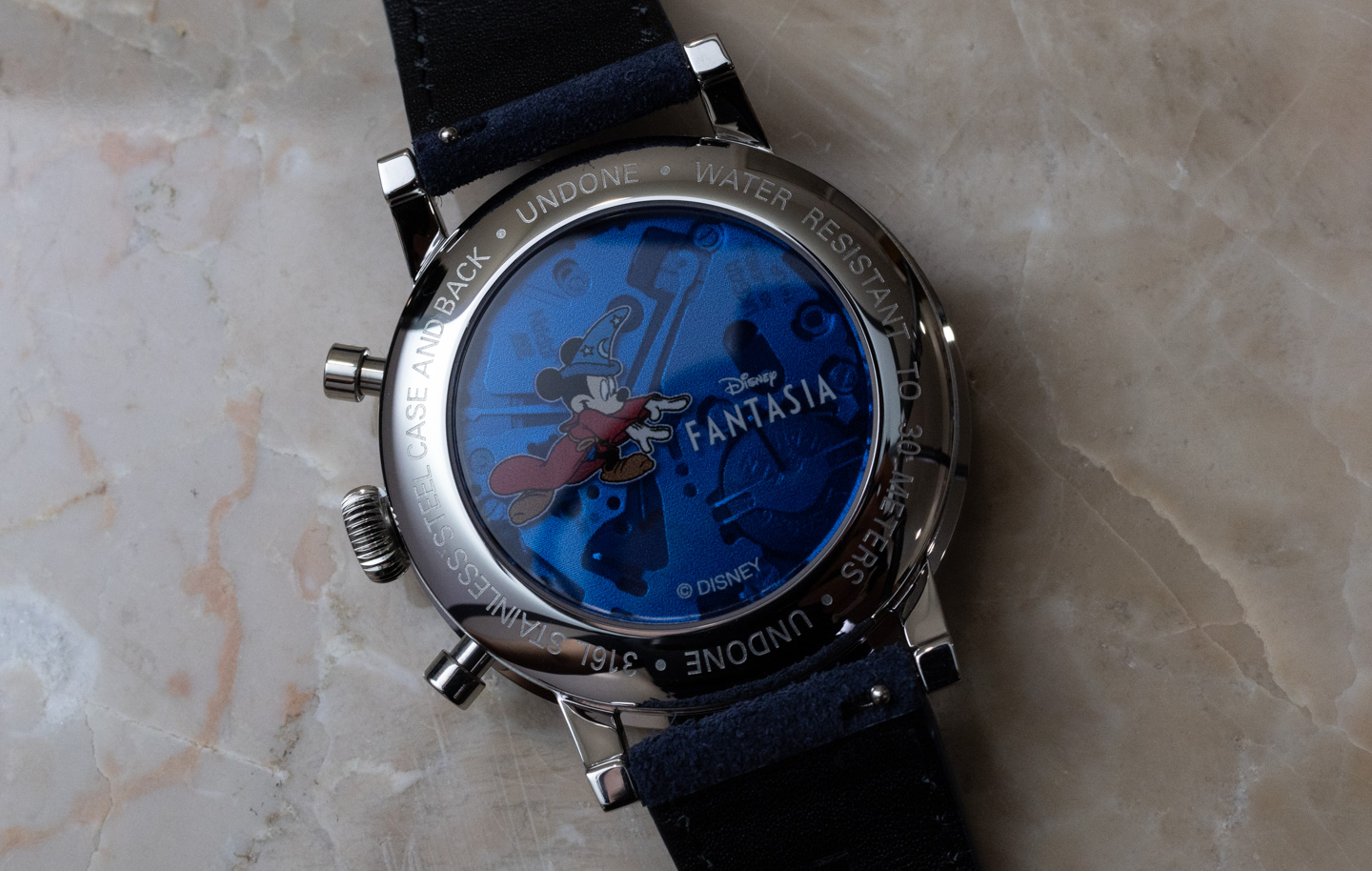 With the UNDONE Disney Fantasia watch, the strategy seemed to be a focus on a Disney entertainment property that no one else was working on. I can’t say that there aren’t any other Fantasia timepieces out there, but there aren’t many. Mickey Mouse in his wizard’s outfit (from The Sorcerer’s Apprentice cartoon segment) has always been a fun look, and it’s nice to see it on a watch dial complete with an attractive blue starry night. This watch is based on UNDONE’s Urban Chronograph in steel, which is about 42mm-wide and 13.5mm-thick. It contains a Japanese Seiko Instruments VK64 quartz chronograph movement with a 60-minute chronograph counter and a synchronized 24-hour display (AM/PM) indicator. The steel case and blue dial tones are matched with an attractive blue suede leather strap.

UNDONE did a competent job with the Fantasia watch, but I still think it is more a “souvenir-style” watch for Fantasia film enthusiasts rather than a timepiece collectible. The watch, indeed, has attractive wizard Mickey Mouse graphics on the dial, and the caseback (which is frosted blue and offers a slight view of the quartz movement inside) doesn’t feel like we are seeing any new artwork or design elements that merge the Fantasia theme with the dial operating to indicate the time. This looks more like a Fantasia fan poster with a watch dial overlaid on top of it. So for mega fans of Fantasia this is an excellent (and uncommon) timepiece option, but next time, UNDONE might want to simply put Mickey Mouse as the sorcerer’s apprentice on the dial with his hands as the hour and minute hands — which is the traditional way in which Mickey Mouse has been featured on wristwatch dials. 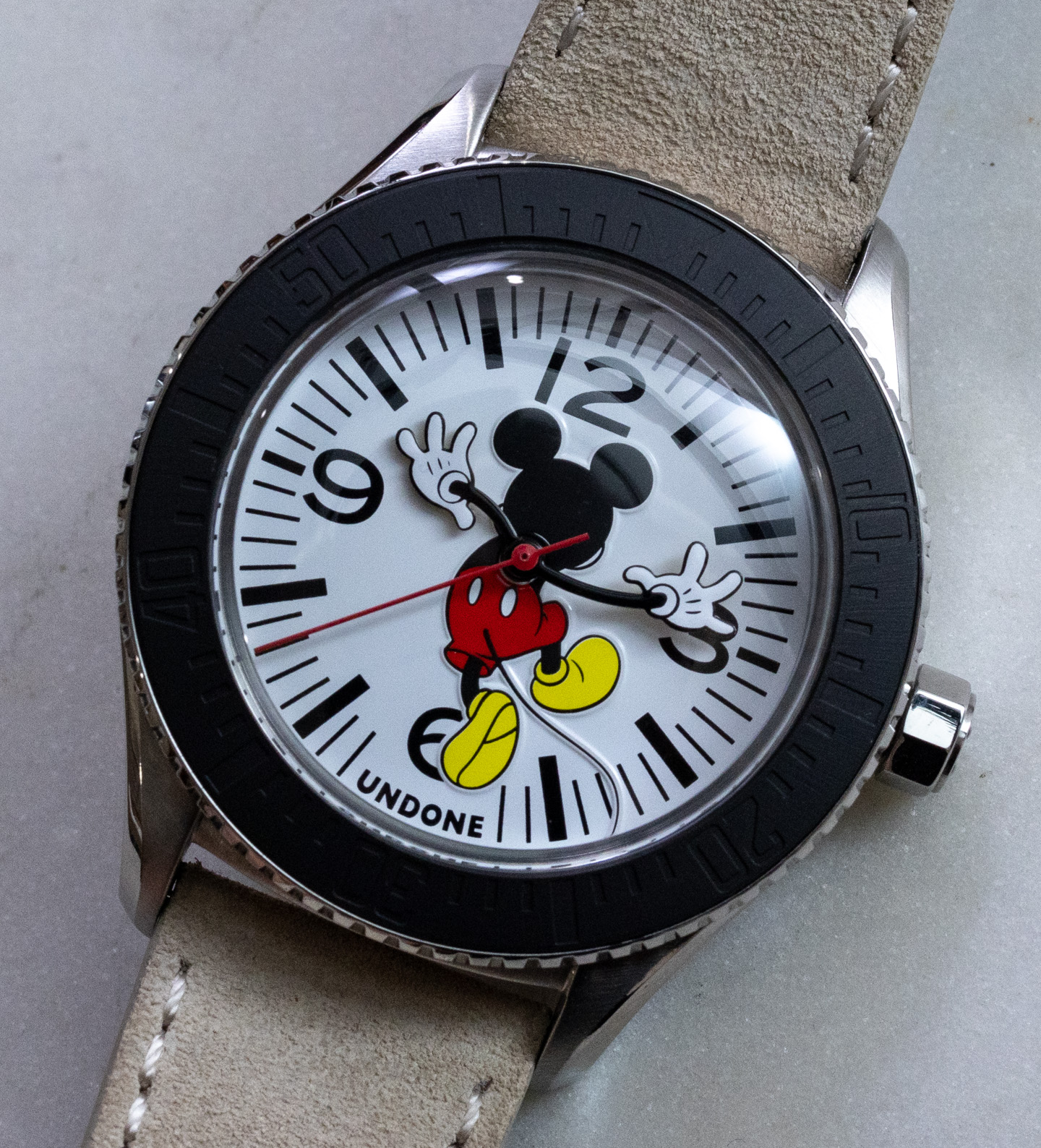 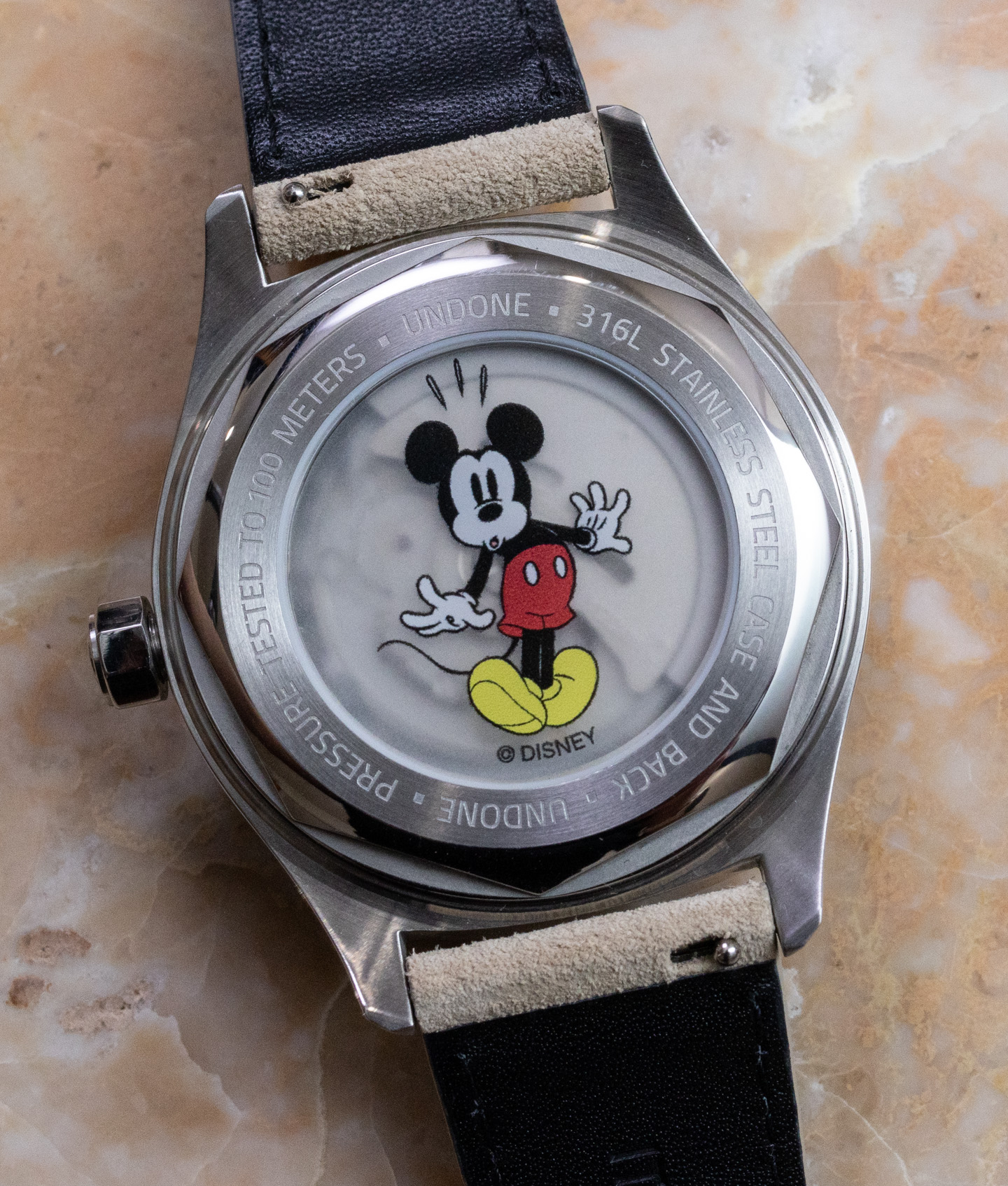 Speaking of tradition, the UNDONE Disney “Guess Who’s Back” is much more along the lines of what timepiece enthusiasts mostly want to see from a Mickey Mouse wristwatch. Here, UNDONE does the clever act of flipping Mickey Mouse around so that it is his back and not his front that is represented on the dial. Artistically, this looks almost identical to Mickey Mouse’s front save for the face, which is still iconically Mickey Mouse even from the behind. Flip the watch case over, and printed on the semi-transparent caseback window is Mickey Mouse’s front side. Mickey Mouse has been on countless wristwatch dials since 1928, but I have no idea if he has even been featured from the back before.

Why this visualization of a Mickey Mouse watch dial works isn’t immediately clear to me, but it apparently offers just enough of an artistic twist on the old story to be satisfying. I’ve personally given the watch a different name that I like more: “Dark Side of the Mouse.” This is a play on Omega’s Speedmaster Dark Side of the Moon, which was in a black ceramic case. Here the name works because we see the dark side of Mickey Mouse’s head. The white dial with Mickey Mouse hands looks plucked from a Bell & Ross dial and around the dial is a black ceramic bezel insert which is a nice feature in this Basecamp-family UNDONE watch. 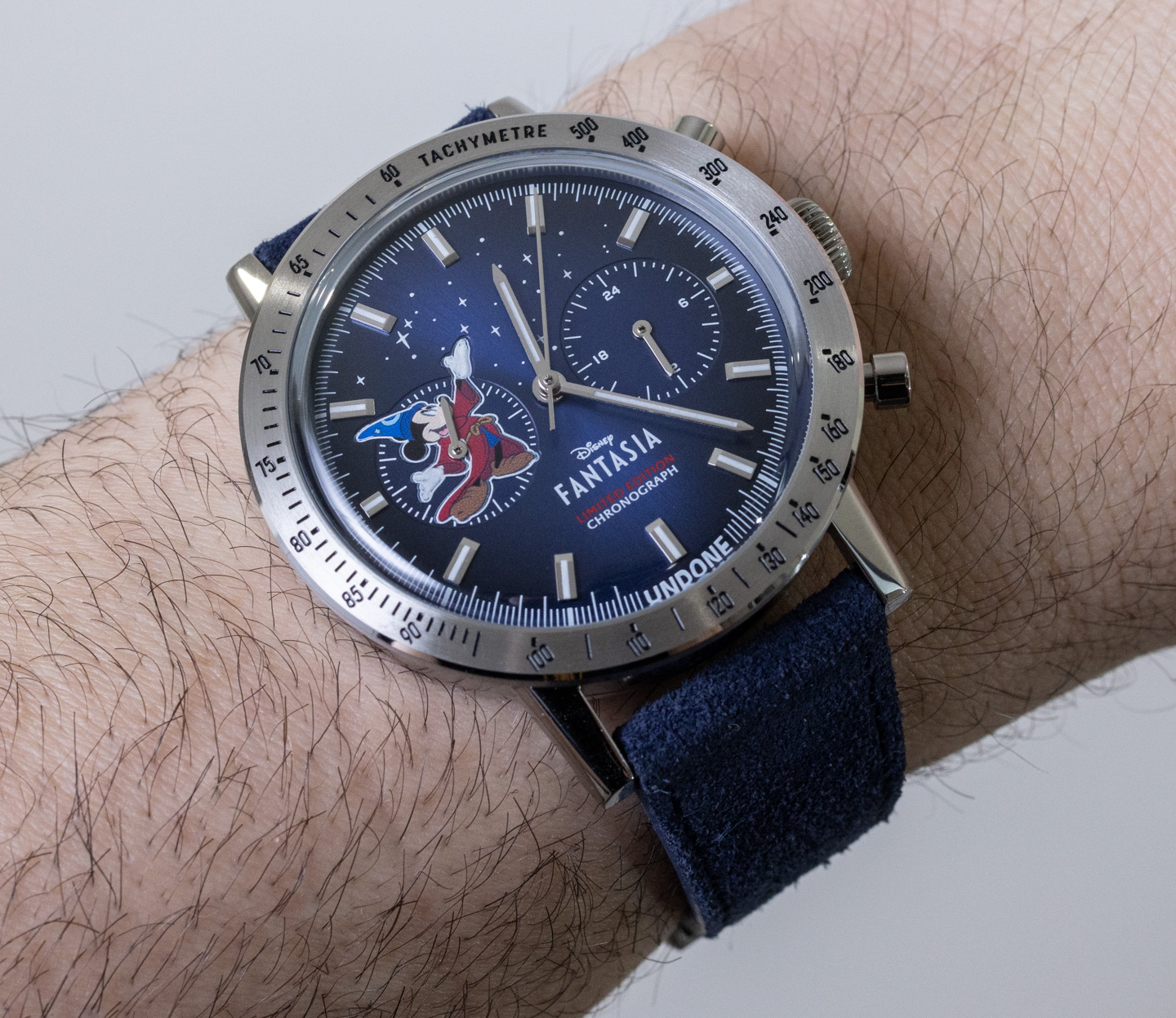 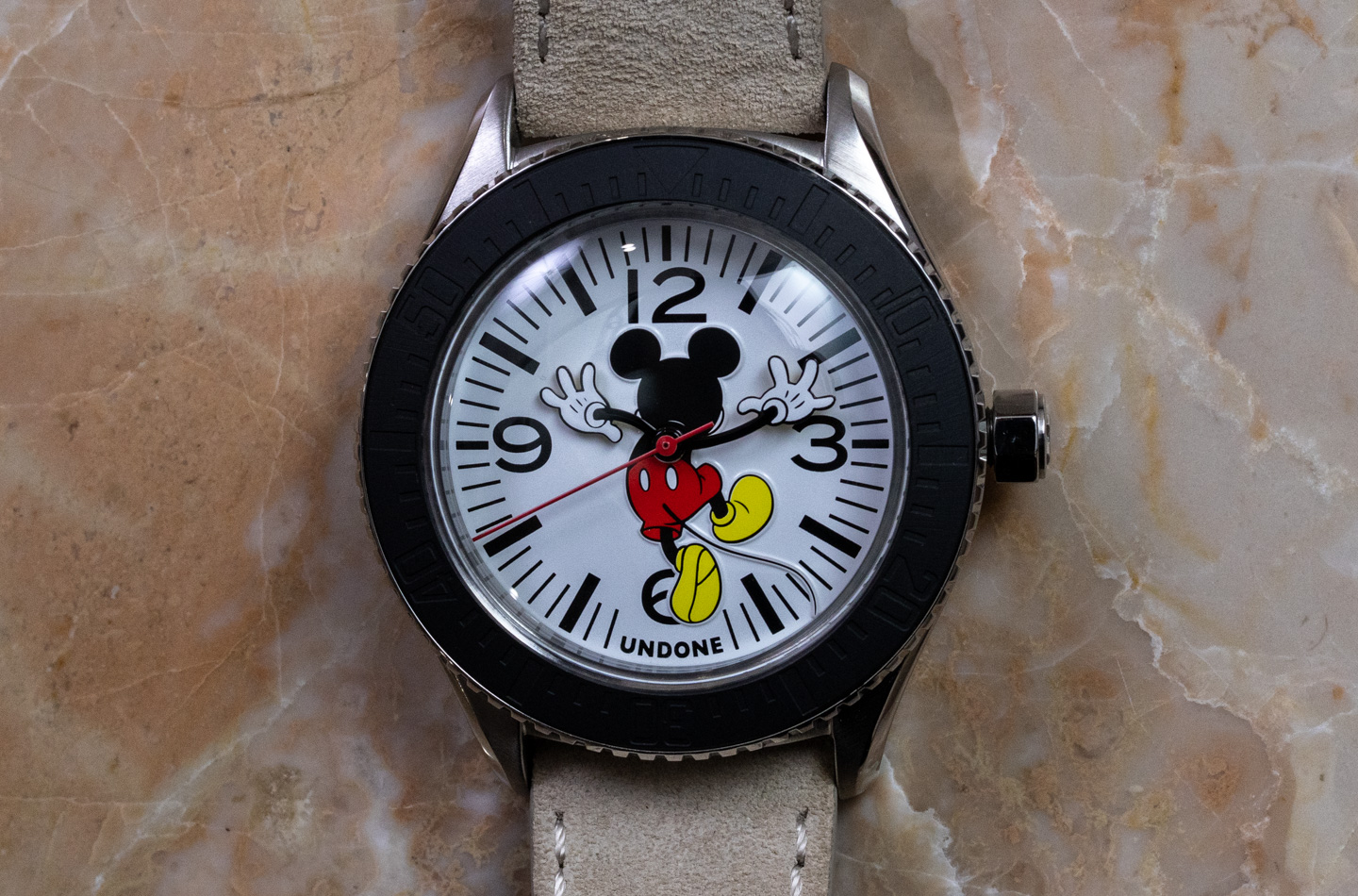 The Disney Guess Who’s Back watch is 40mm wide in polished steel and water-resistant to 100 meters. Over the dial is a Lexan crystal, which is an interesting and tough material that I only know UNDONE to have experimented with as a watch crystal material. The domed crystal has some reflectivity and, while not as ideal as sapphire crystal, is worlds better than the acrylic crystals the look is meant to emulate. Inside the watch is a Japanese Seiko Instrument caliber NH35/70 automatic movement that operates at 3Hz with about two days of power reserve. Attached to the case is tan-colored suede leather strap that goes nicely with the overall case, though I think if you wanted to amplify the Mickey Mouse theme here, there are plenty of alternative straps you might consider pairing with the case. (What comes to mind for me is something black with red stitching.)

I fully expect more Disney character license watches from UNDONE to come soon, as there is just so much to work with and UNDONE has the “character watch” down pretty well, at this point. Interestingly, the UNDONE  Mickey Mouse Guess Who’s Back watches are not part of a limited edition, but the Disney Fantasia watches are (according to the dial), but without a disclosed production number. Price for the UNDONE Disney Fantasia watches is $480 USD and price for the UNDONE Disney Guess Who’s Back watches is $599 USD. Learn more or order at the UNDONE watches website here.