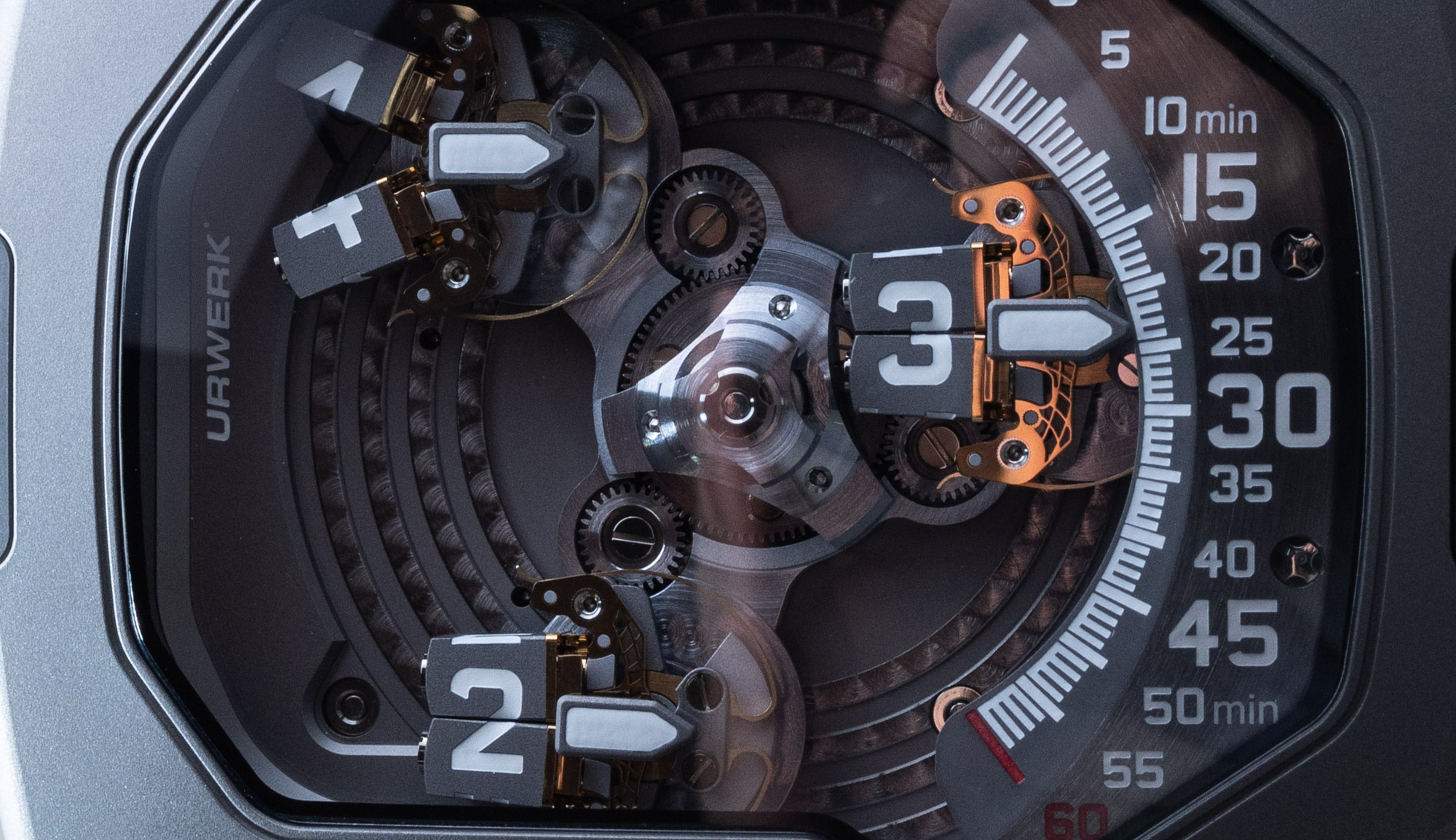 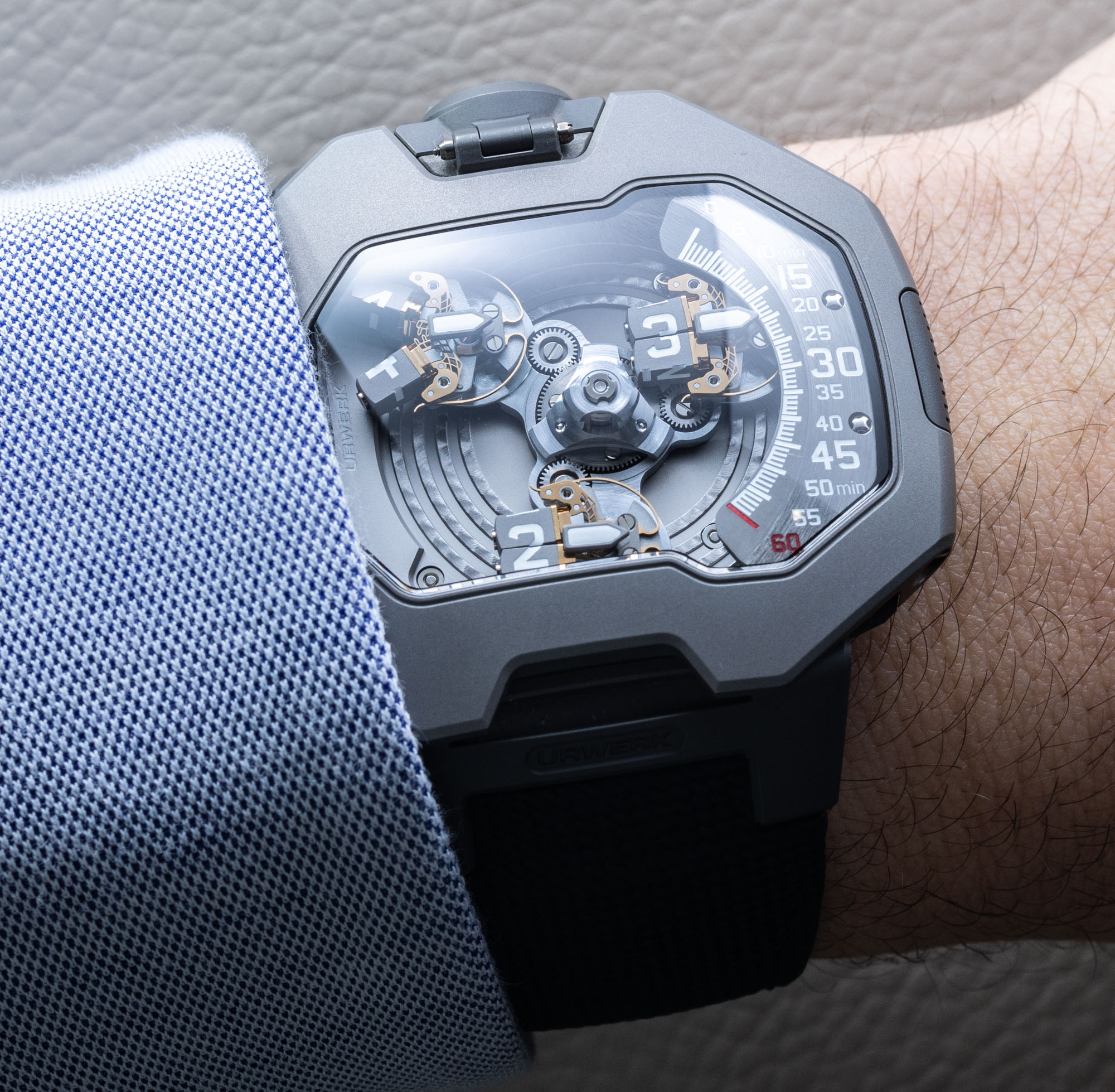 Even for the average person who has no real interest in watches, it’s hard not to be impressed by Urwerk. The brand’s design language is so unapologetically space-age and modern that it’s impossible not to be intrigued by its timepieces, even if it’s simply because they look so incredibly different from conventional wristwatches. I often describe Urwerk’s design language as mechanical timepieces that appear as though they could easily blend in on the set of a sci-fi movie, and I’m clearly not the only one who feels this way, given that Robert Downey Jr. requested that his character wear an Urwerk watch while playing Tony Stark (aka Ironman) in the ultra-famous Marvel movie franchise. All Ironman associations aside, one of the Urwerk’s most noteworthy new releases from 2022 actually offers a completely different reference to the world of Hollywood, and the Urwerk UR-120 “Spock” watch reimagines the brand’s signature wandering hours display to give the new model a unique design that offers a subtle nod to Star Trek’s Vulcan hand salute, along with a more refined case for improved comfort and wearability. 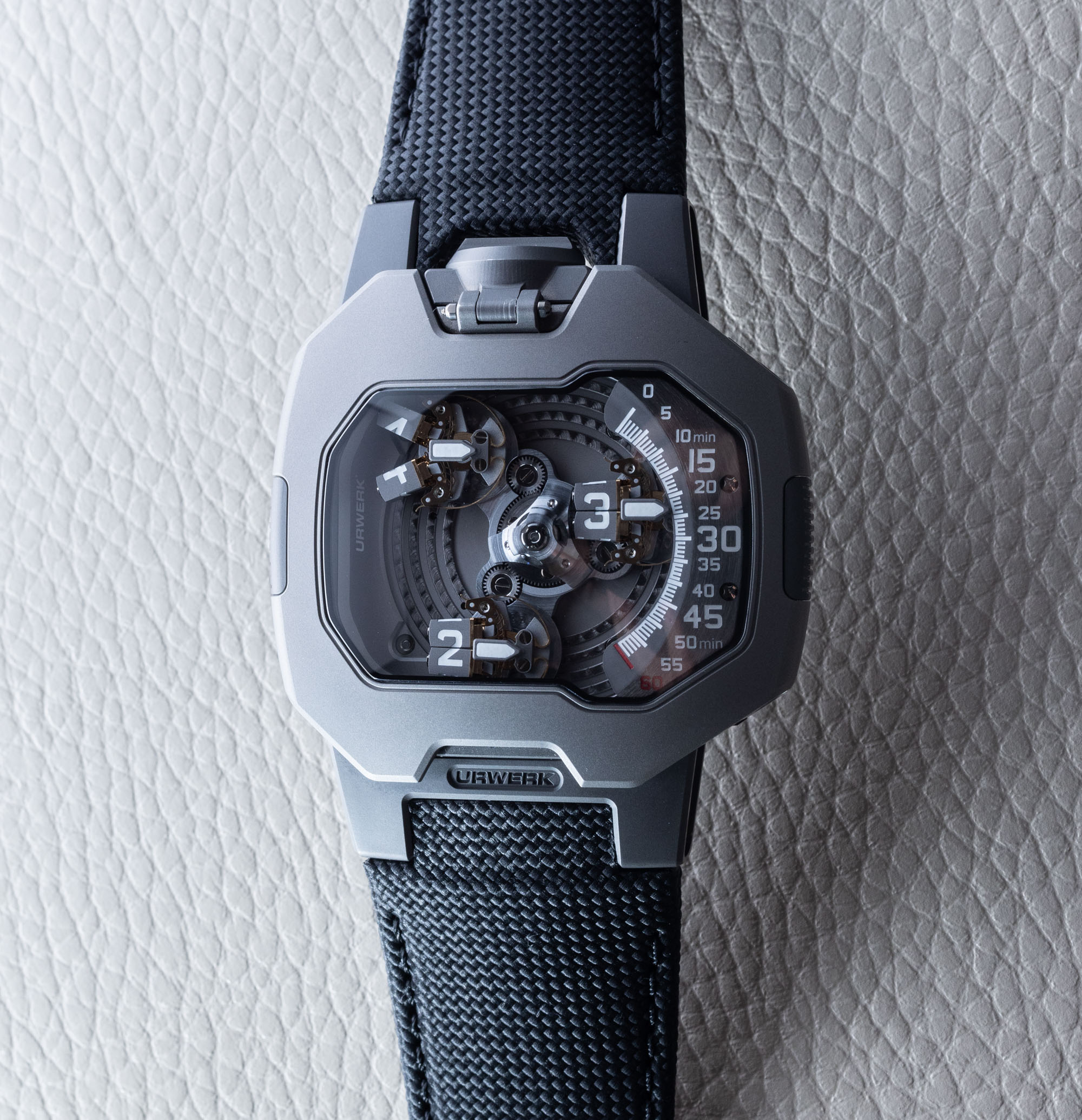 The asymmetric case of the Urwerk UR-120 “Spock” watch has a similar overall shape as the UR-110, although it is both thinner than its predecessor and offers a more refined overall appearance with a simplified and more streamlined bezel that lacks the exposed screws that can be found on the UR-110. Additionally, while the strap on the UR-110 connects directly to the case, the new UR-120 “Spock” has a set of articulating lugs that allow it to hug the wrist more closely, while also giving it a slightly more conventional overall appearance. Just like most Urwerk watches, the on-paper measurements for the UR-120 “Spock” initially seem enormous, and the model officially measures 47mm wide by 44mm long, with an overall thickness of 15.8mm. With that in mind, the relatively flat profile of the case combined with its fairly compact lug-to-lug measurement means that the watch wears significantly smaller than its on-paper specs might otherwise indicate, and the fact that its crown appears on the side of the case at the 12 o’clock position means that its 47mm width will ultimately seem quite a bit more compact than a round watch with a similar case diameter. 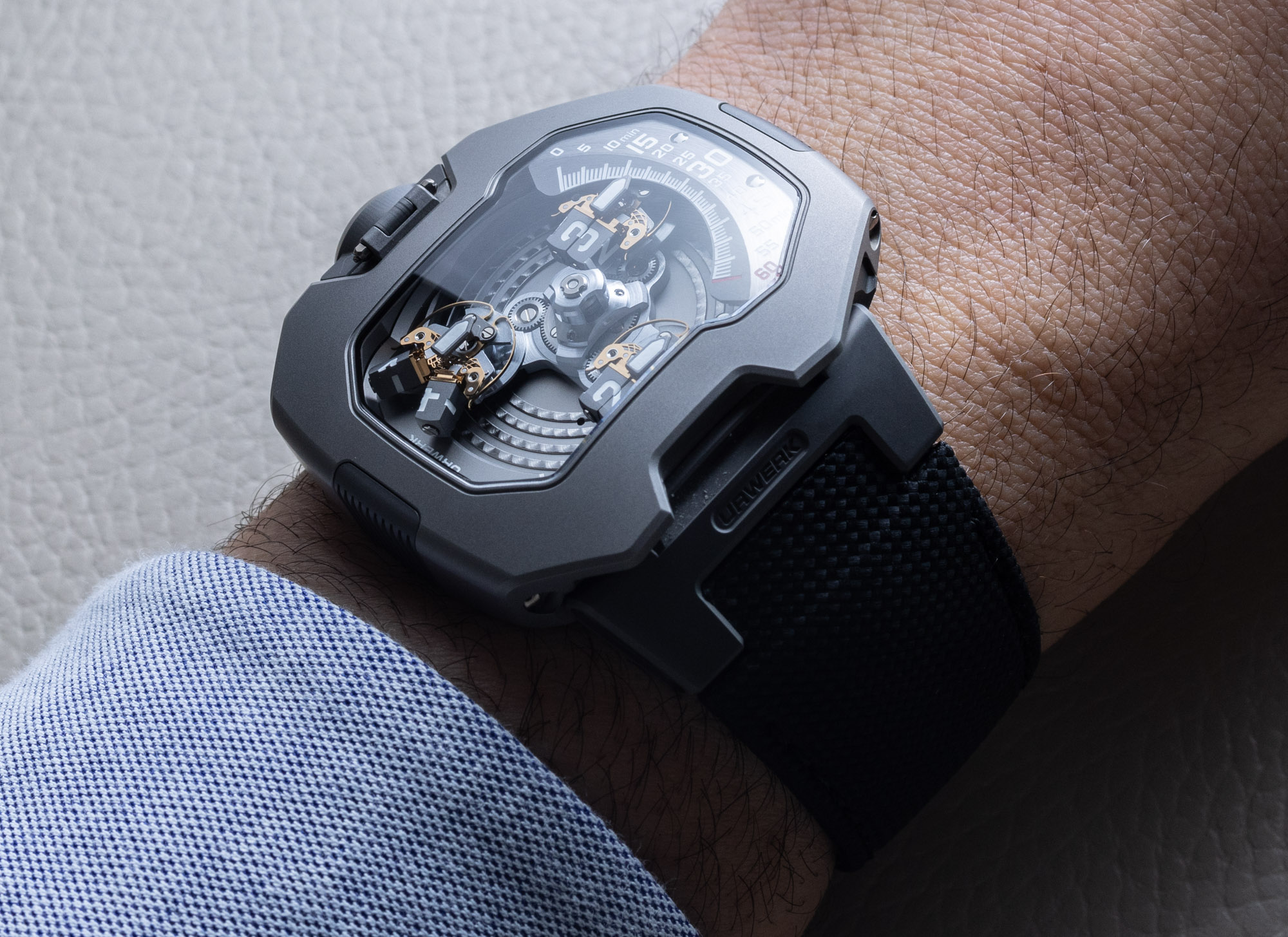 The case structure follows somewhat of a clamshell design that consists of a titanium lower half and a stainless steel upper section, with the two halves secured on either side with a pin in somewhat of a hinge-like manner. This underlying style will be immediately recognizable to those who are familiar with the Patek Philippe Nautilus, although other than incorporating a similar method of attaching the two sides of the case to each other, the two watches themselves have virtually zero aesthetic overlap in their actual designs. Both the titanium lower portion and its stainless steel upper half are given a sandblasted finish and they appear in dark gray tones for a cohesive and modern overall aesthetic. The top section of the case is fitted with a curved asymmetric sapphire crystal, and since the entire case measures 15.8mm at the apex of the crystal, the actual perceived thickness of the watch is quite a bit less than its official on-paper dimensions. Meanwhile, the reverse side of the case features deep grooves in the titanium center section, along with a small arc-shaped sapphire display window that offers a view of the self-winding mechanical movement that powers the watch. No one is ever going to say that the UR-120 is lacking a bold and unconventional design, yet its overall appearance is undeniably a bit less “out there” than many of Urwerk’s other models. 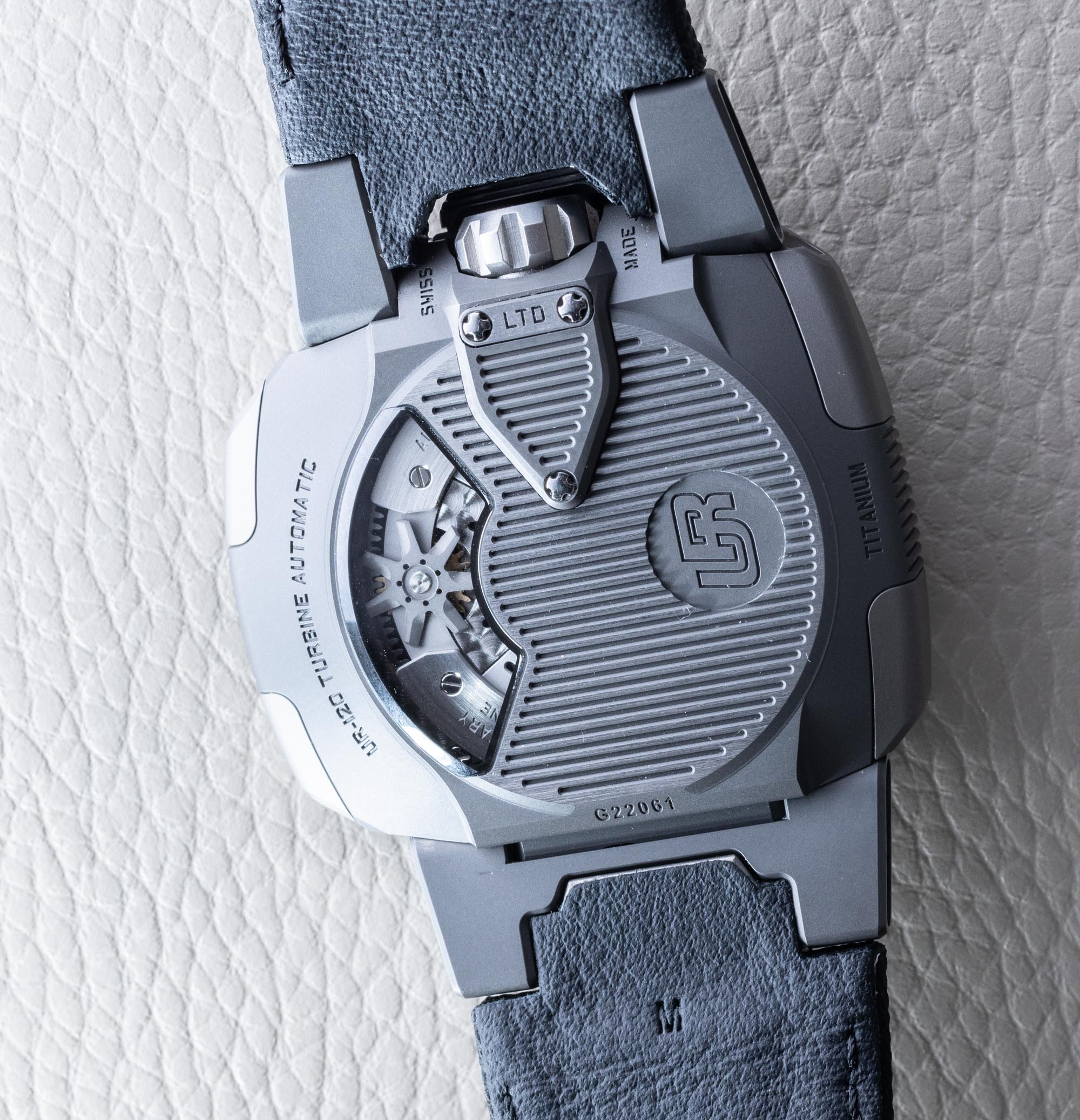 One of the more common critiques of Urwerk’s watches is that they can wear a bit thick and sometimes sit slightly awkward on the wrist, but this has been vastly improved on the new UR-120. The structural nature of wandering hours complication inherently requires a certain amount of space inside the case. Even if you were to make an ultra-flat version, it would lose some of its visual impact in the process. On top of that, the fact that many Urwerk watches don’t have traditional lugs in any capacity, but rather an integrated strap that hinges directly to the bottom of the case means that many previous models have sat on top of the wrist instead of wrapping around it. Any watch collector or enthusiast will be the first to tell you how much of an impact lugs can make on the overall on-wrist experience of a watch, and articulating lugs have an amazing ability to help manage the size of large and chunky cases. In regards to the Urwerk UR-120 “Spock” watch, the hinged lugs work together with an already flat case profile and short lug-to-lug measurement to create a timepiece that wears deceptively flat on the wrist, despite having an on-paper case thickness that would otherwise firmly place it within the chunky category. Additionally, fitted to the articulating lugs is a two-piece calf leather strap that has been embossed to give it the woven texture of ballistic nylon. The overall visual effect is ultimately very similar to the brand’s fabric straps, yet the use of leather means that it is more flexible, and this ultimately allows it to conform more tightly to the wrist and further promote a flat and thin overall profile. 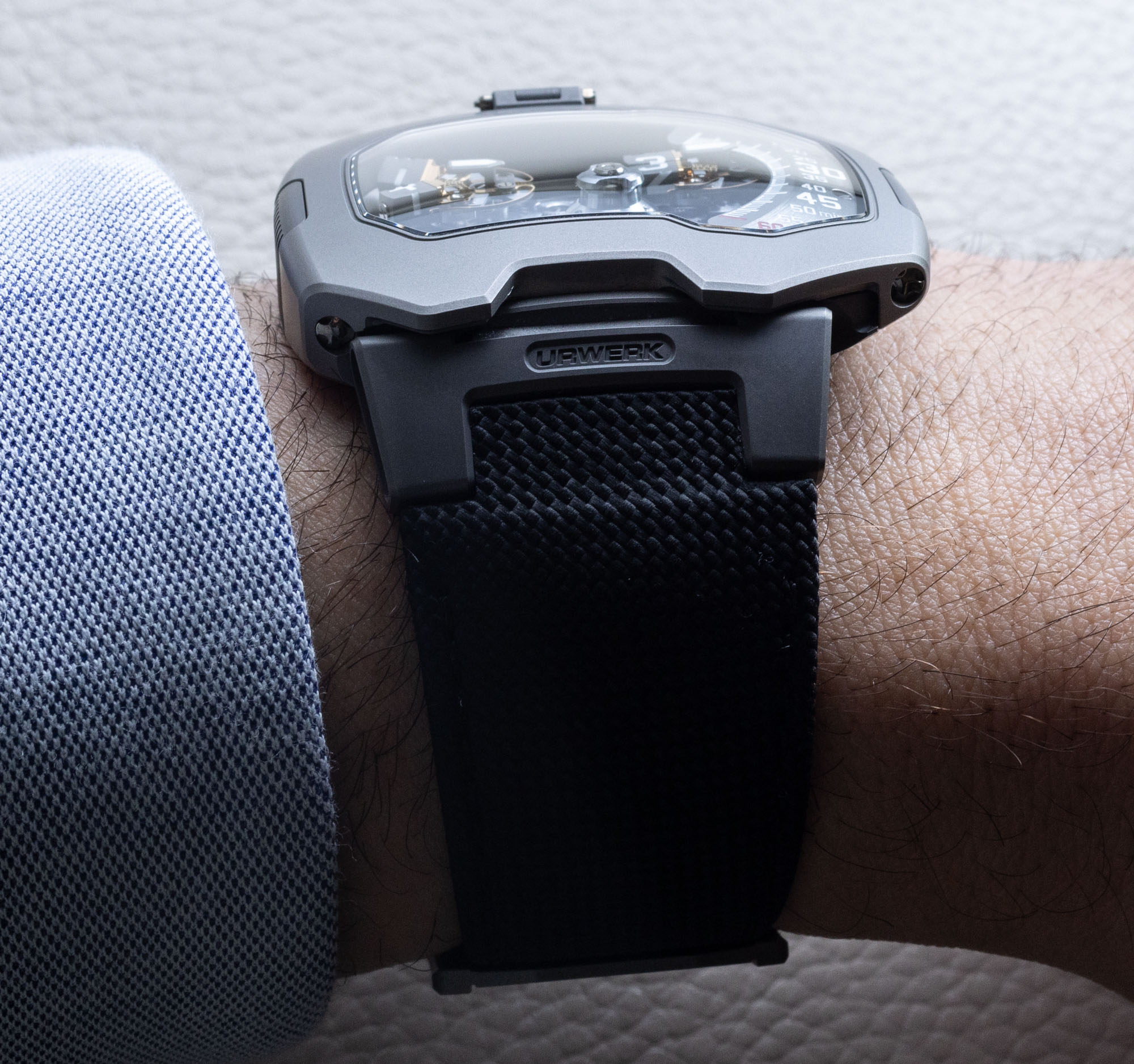 The wandering hours complication has become a signature design element on many Urwerk watches, and it takes center stage on the new UR-120, while providing it with its signature “Spock” design detail. The asymmetric bulge on the right-hand side of the case contains the arc-shaped minute track for the time, and just like most wandering hours complications, the hours will be displayed by the numeral on the rotating satellite that currently sits next to the minute track, with an indicator on the satellite itself pointing to the specific corresponding minute. Like many other Urwerk watches that feature a wandering hours display, the central rotating mechanism contains three orbiting satellites, with each one responsible for displaying four of the twelve hours that will be shown throughout the day. However, rather than having each satellite consist of a single rotating block, two individual blocks are used for each of the three satellites, and these independently rotate and come together to form the necessary numerals. Splitting apart the satellite in this manner allows the overall assembly to be thinner, which helps the UR-120 achieve its more streamlined case profile. However, as each satellite moves away from the minute scale, the two blocks that form it split apart in a V-shaped manner, which is reminiscent of the hand gesture that accompanies the Vulcan’s famous “live long and prosper” salute. Given that this isn’t actually a Star Trek-branded watch in any capacity, there aren’t any markings on it that relate to the sci-fi franchise, and the way that the satellites split apart ultimately just makes for a more dynamic overall display, while further adding to the mechanical intrigue of an already rather striking and unusual timepiece.

Powering the Urwerk UR-120 “Spock” is the UR-20.10 self-winding movement, which is based upon fairly traditional underlying technology, despite its highly unconventional display. The UR-20.10 is a 32-jewel automatic movement that uses a Swiss lever escapement and runs at a frequency of 28,800vph (4 Hz) with a power reserve of approximately 48 hours. Like other self-winding Urwerk calibers, the automatic winding system incorporates the brand’s Windfänger mechanism, which is the star-shaped component seen through the window in the caseback responsible for regulating the intensity of the oscillation weight’s rotations. While only a small portion of the movement is visible through the arc-shaped aperture in the caseback, the Urwerk UR-120 “Spock” is not in any way lacking visual intrigue for those who enjoy the appearance of micro-mechanics at work, as the entire wandering hours mechanism is prominently displayed on the dial side of the watch. While the UR-20.10 is still a wandering hours movement with three orbiting satellites, the fact that each of the satellites splits apart gives its display a unique identity that is both more dynamic and more refined than what is provided by the movement inside the similarly-oriented UR-110 watch. 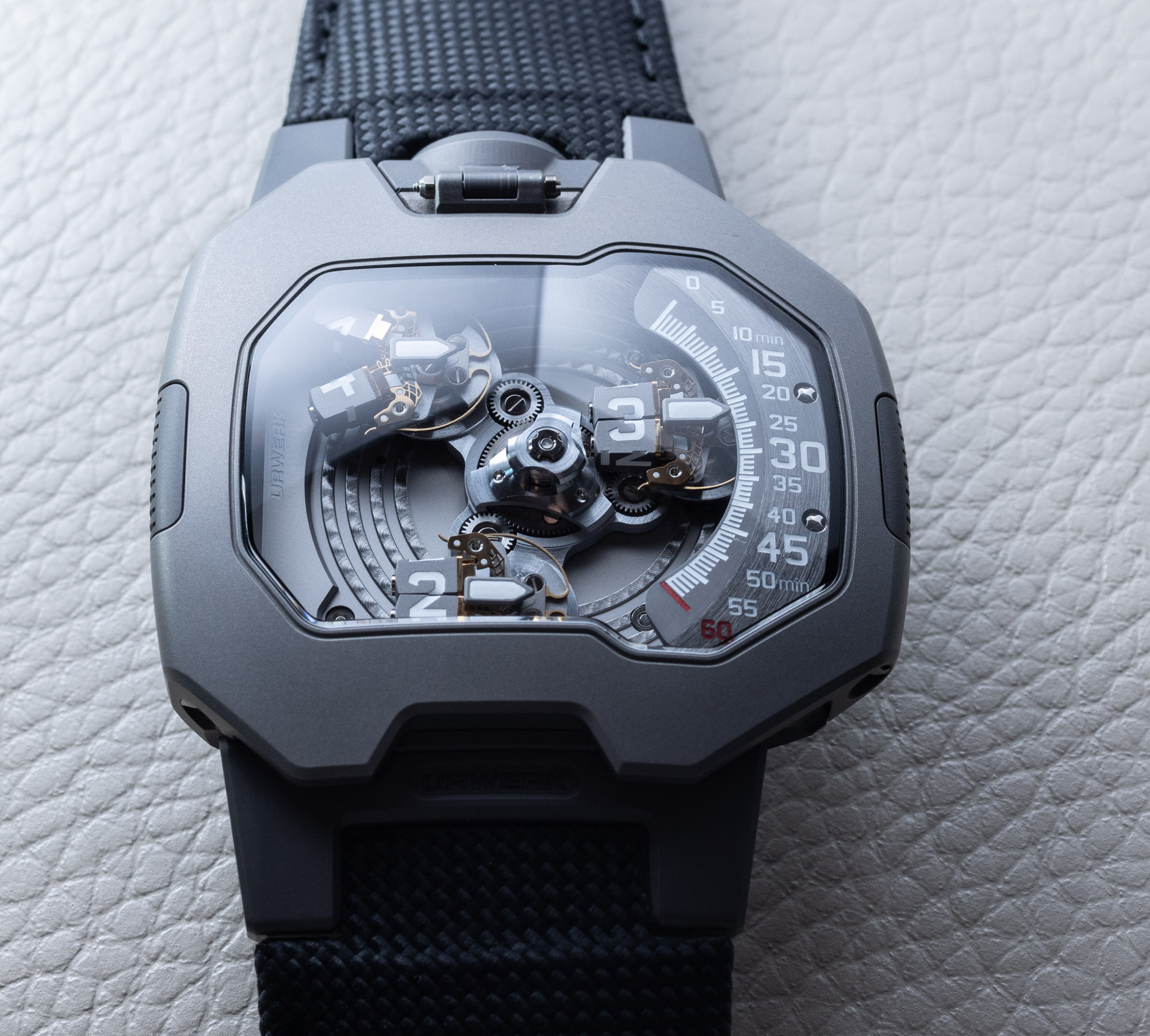 Between its thinner and more streamlined case profile and its use of separately mounted articulated lugs, the Urwerk UR-120 “Spock” is easily one of the most elegant and wearable models that the brand has ever put forward. That said, the UR-120 is far from being a shrinking violet, and it is ultimately a bold mechanical statement piece that oozes futuristic sci-fi vibes and doesn’t look quite like anything else in the industry. Urwerk watches have never had a problem looking cool or providing visual intrigue to the mechanically inclined. However, while some of the brand’s models have been critiqued for not placing a big enough emphasis on everyday wearability, the UR-120 is proof that Urwerk sincerely intends for its timepieces to be worn by their owners and genuinely cares about the ergonomics of the on-wrist experience. Despite placing an emphasis on wearability, the Urwerk UR-120 “Spock” is still undeniably an unapologetic statement piece, and with an official retail price of $150,000 USD, it is also certainly priced appropriately for this category. That said, Urwerk offers one of the most distinctive design languages of any brand currently producing luxury watches today, and there are many other watches that cost significantly more than the UR-120 that don’t look nearly as visually impressive or offer half as much originality. The fact that the split-satellite design allows the UR-120’s wandering hours mechanism to be both more dynamic and more compact is a technical feat, and whether or not you care at all about Star Trek, it’s undeniable that this novel approach results in a truly interesting visual display. For more information, please visit the brand’s website.