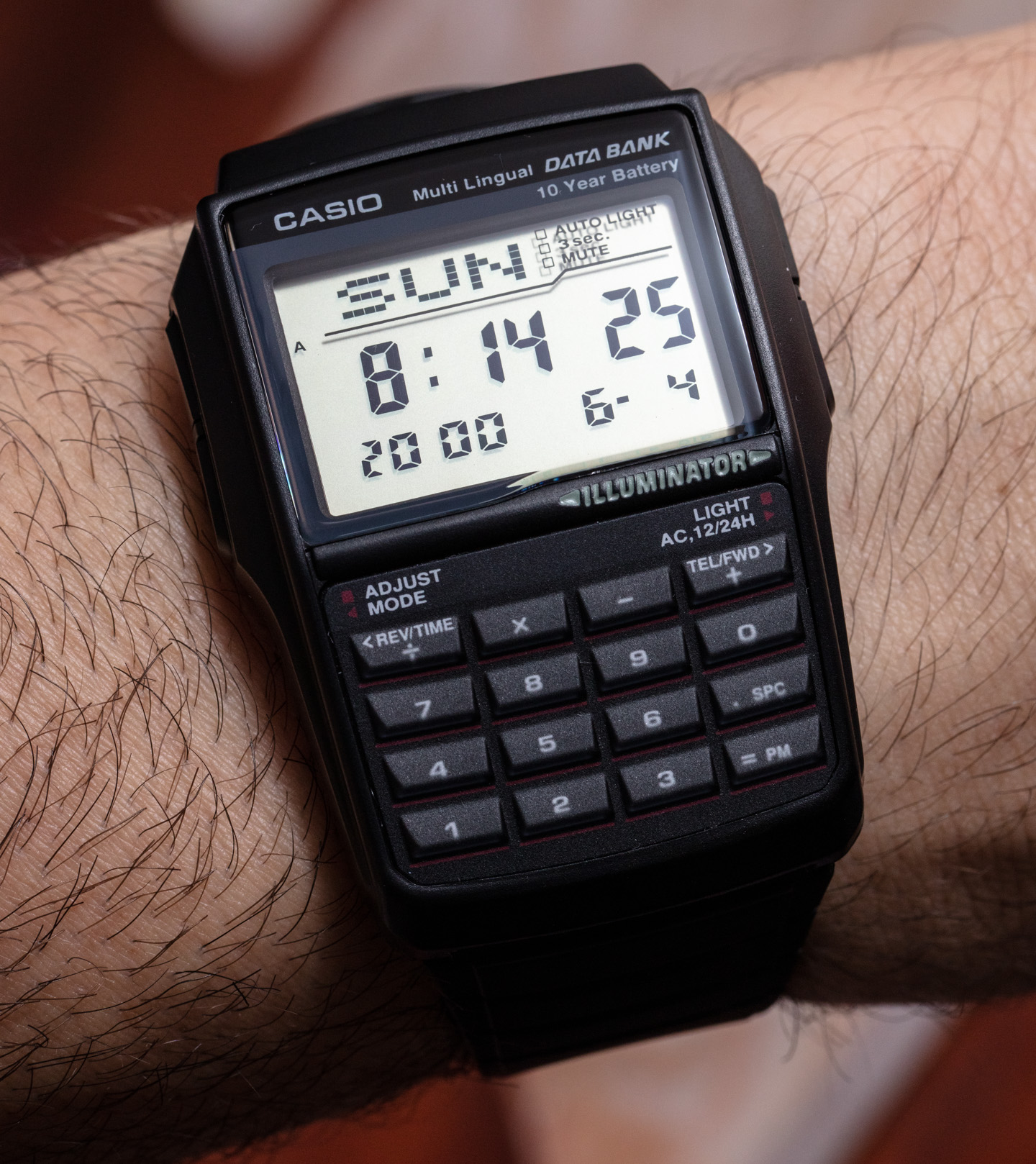 Picture me, the late 1980s, a kid in LA. The only watches I’ve ever known on my wrist were made by Casio. And the one thing I used to evaluate the value of a wristwatch was the number of functions it was capable of doing. Enter the Casio calculator watch. It seemed to do all the things my other Casio watches did, but also include a large number of buttons and perform complicated calculations, the utility of which I could only imagine with child-like abandon. These are my most vivid memories of the Casio Databank calculator watches. Today, I go hands-on with three of these, which actually do date back to the 1990s but are still produced and sold by Casio today. Are these charmingly obsolete vestiges of the past, or does the ultra-affordable Casio Databank calculator watch still have style and intellectual merit today?

I eventually got my chance to wear a Casio calculator watch in the early 1990s — probably more than one, given that they didn’t last forever on a kid’s wrist. I would wear them into the ground until they died. Funny enough, that never happened with any Casio G-Shock watches (because they are so durable). Let me remind you that, today, the Casio Databank watch collection’s average price is only about $30 USD. 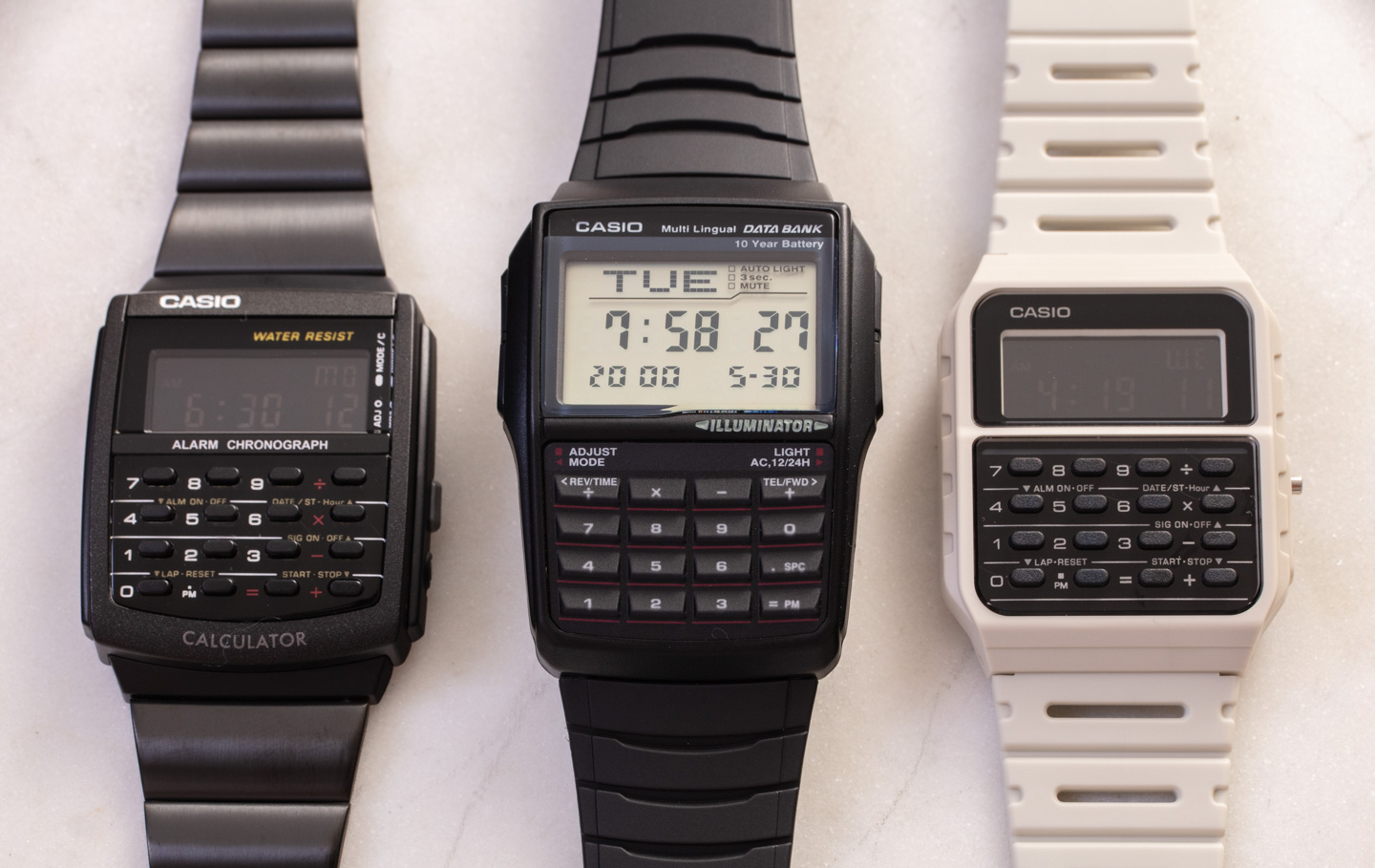 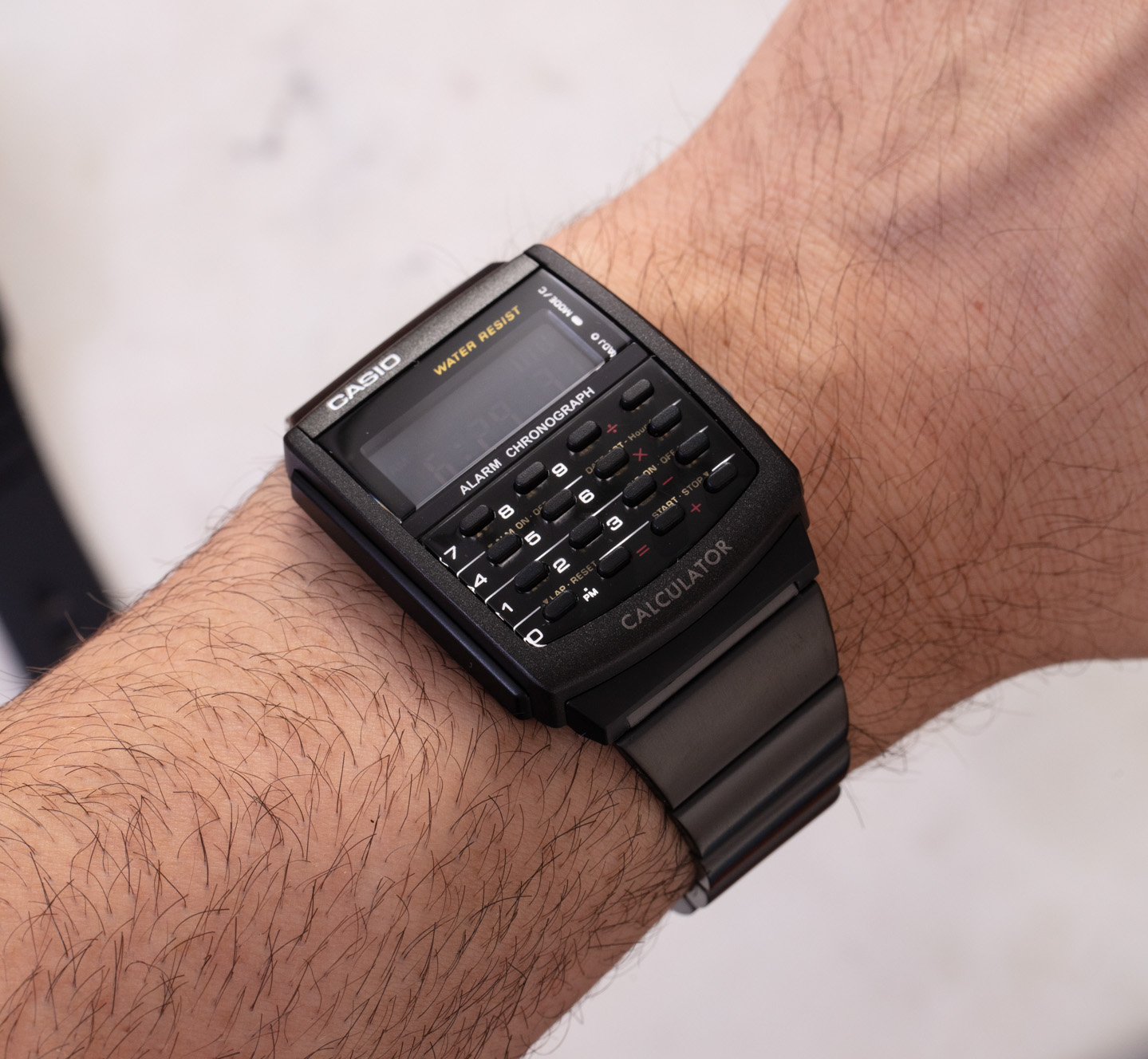 From a pop-culture perspective, the calculator watch means a lot more than “I can do math on my wrist.” In 1985’s Back To The Future, Doc wears a Seiko calculator watch, and a few other companies produced besides Casio. That said, the calculator watch is really a function of Japanese culture and was most celebrated there. It combined so much of what Japanese engineers love. First, it takes something useful like a calculator (especially at the time) and miniaturizes it in a way it can be worn on the wrist. Then, the tool is combined with other features (such as telling the time and calendar information), which make it a real gadget. The wearable gadget is a very sexy concept for many watch wearers (including myself), and the calculator watch was the king of this small niche for a time in the 1980s and 1990s. Today, the smartwatch is very clearly an extension of this concept, given our ongoing desire to wear gadgets on our wrists. This behavior seems practically hard-wired into our DNA. 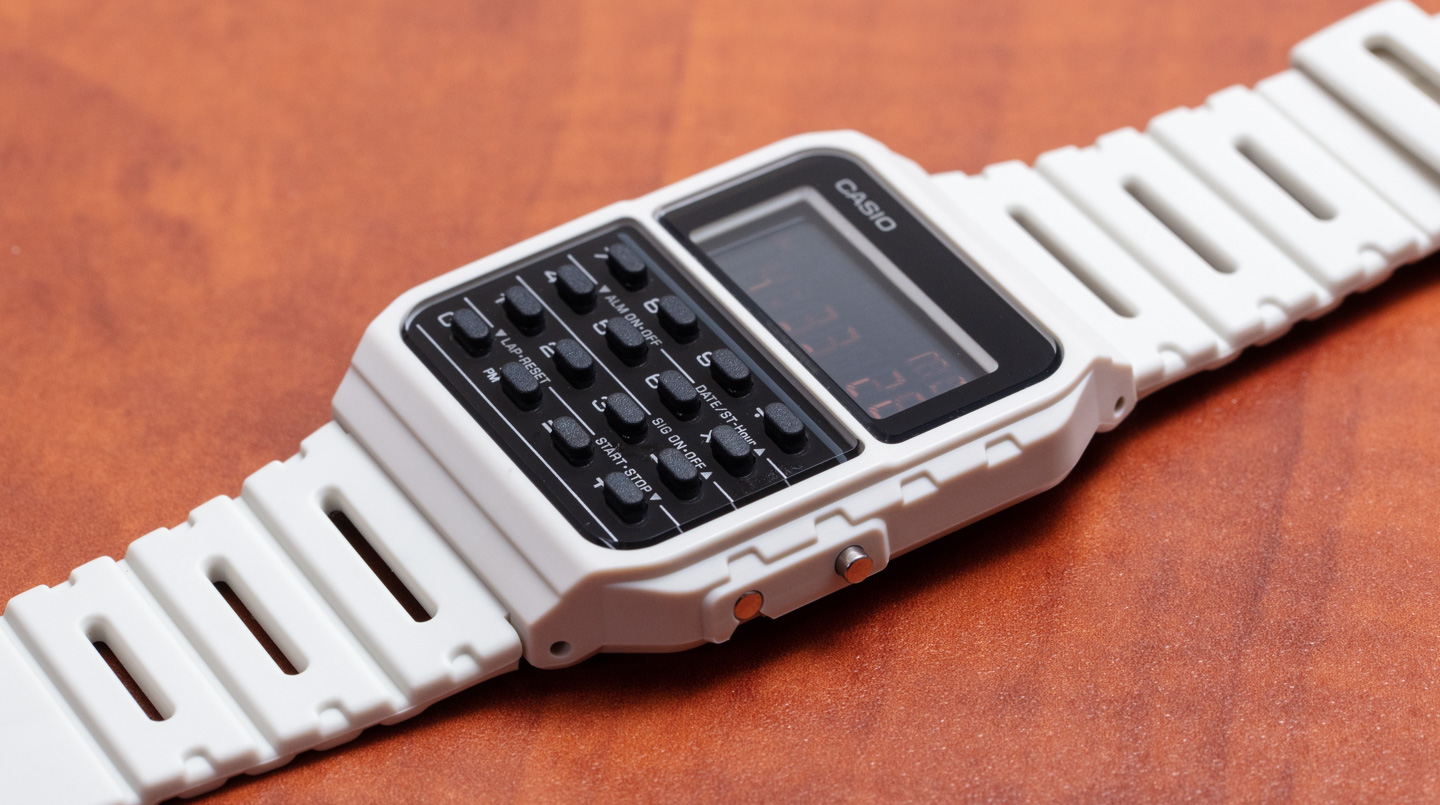 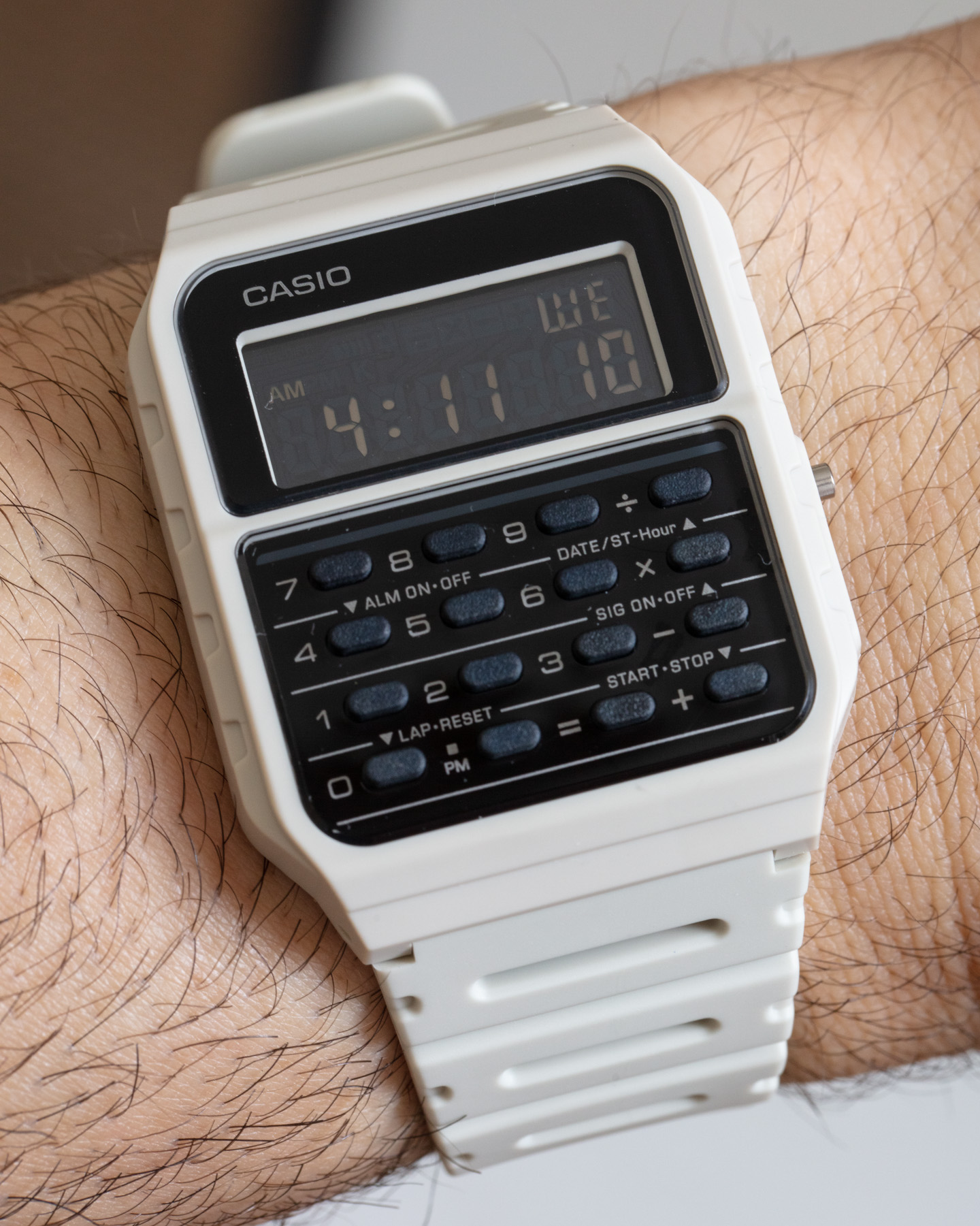 The three Casio Databank watches I look at here today start with the Casio reference CA3WF-8B. This is a neat-looking off-white and black “Stormtrooper suitable” entry-level watch from the brand that combines a simple module with a calculator. Hipsters should love products like this as well as anyone wanting to make a bit more of a statement with their retro digital watch. I mean if you really want to assume the 1980s nerd watch vibe, you gotta go full keypad face. The watch is plastic, simple, and light. It wears very comfortably and has a lot of fashionability for a calculator watch. It also only costs $26.95 USD. In large part because Casio finished paying off the R&D for it a few decades ago. 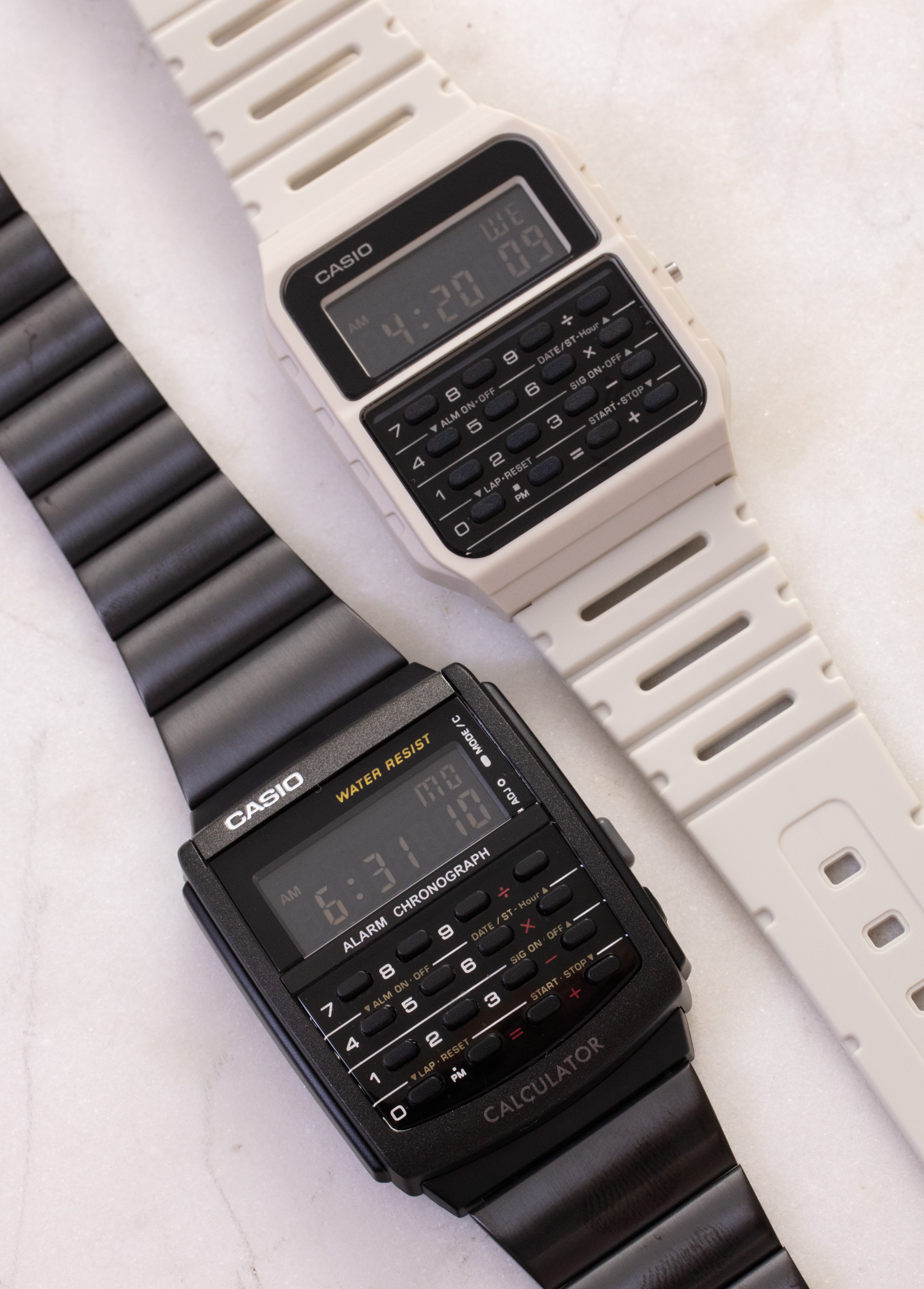 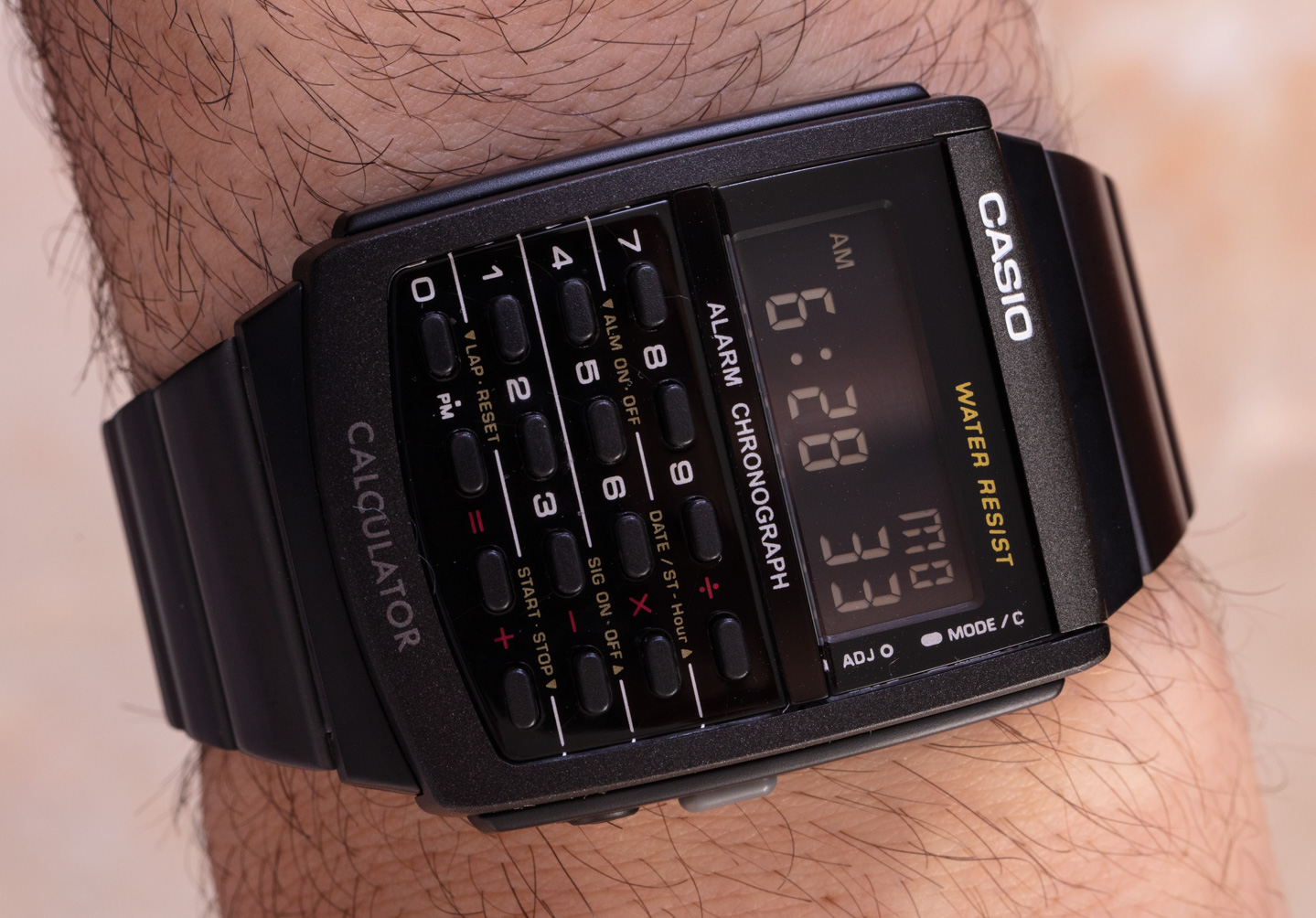 Next up, we have a true merger of classic Databank and some modern-style elements including a matching black-colored steel bracelet. The Casio CA506B-1AVT is based on one of the later-generation Casio calculator watches from 1998. It was upgraded with a bracelet and given this hip, stealthy all-black style. A good question to answer now is, “Can you actually hit all those small buttons with your fingers?” The answer is “more or less.” It is true that a lot of people find it more comfortable to press the little keypad buttons with a stylus or some pointing instrument. Then again, with some practice, you can pretty reliably hit the intended button each time. But if you are going to wear a calculator watch on your wrist, you might want to keep a stylus in your pocket. The Casio CA506B-1AVT is actually among the more expensive Casio Databank calculator watches with a retail price of just $64.95 USD. 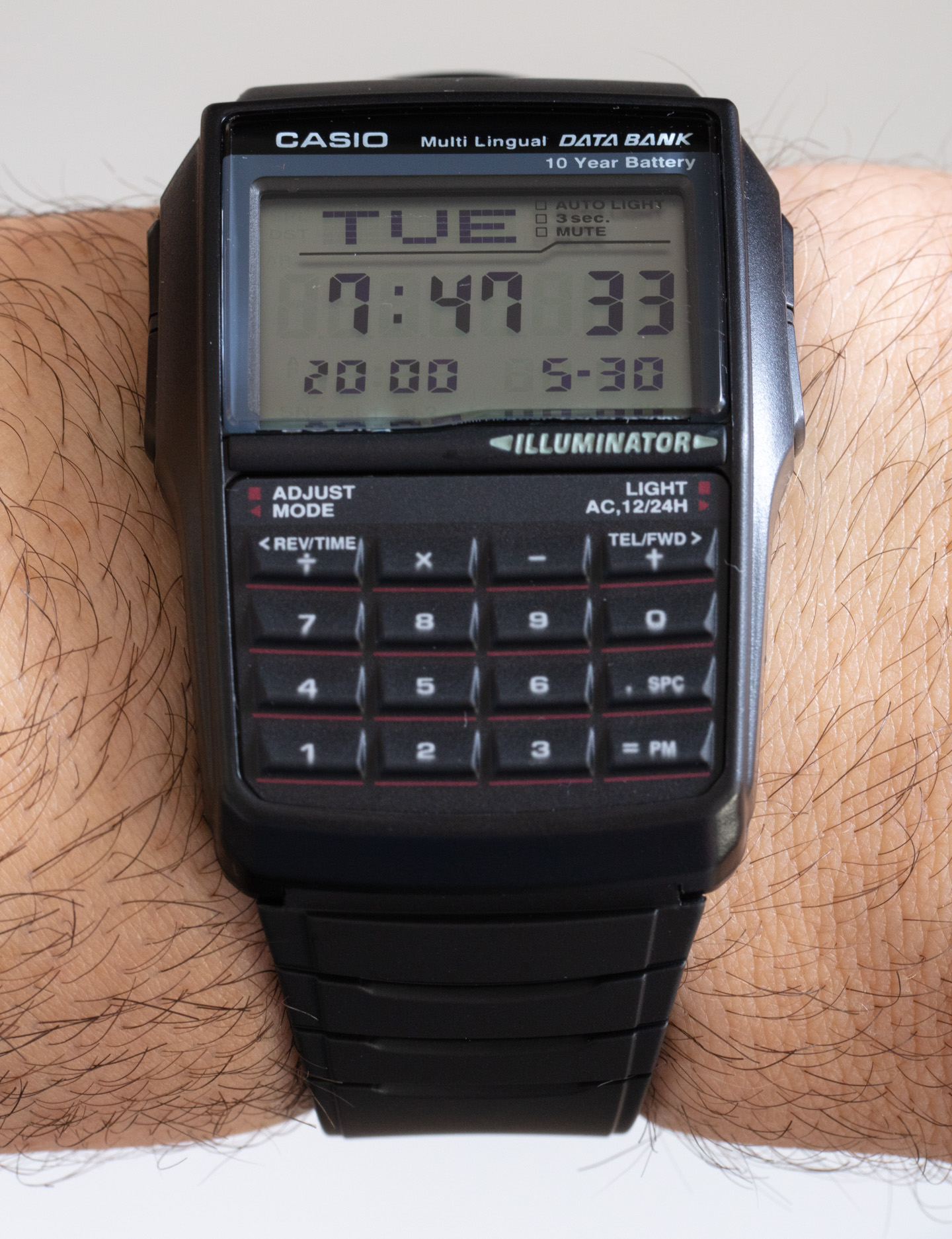 Finally, we have one of the most sophisticated Casio Databank calculator watches the Japanese brand ever created with the reference DBC32-A1. It has features that things like a smartwatch and smartphone do infinitely better, but at the time, this was a serious piece of tech with impressive functionality. “Databank” is quite literal, and the idea is that these watches are designed to store information. A calculator must store some information, and this watch had enough memory to also store things like phone numbers and some light address book functionality with enough storage for up to 25 contacts. Casio engineers also packed it full of other features, such as multiple alarms (there are five of them, and each can be programmed to display a custom reminder message), multiple languages, and even a 10-year battery. 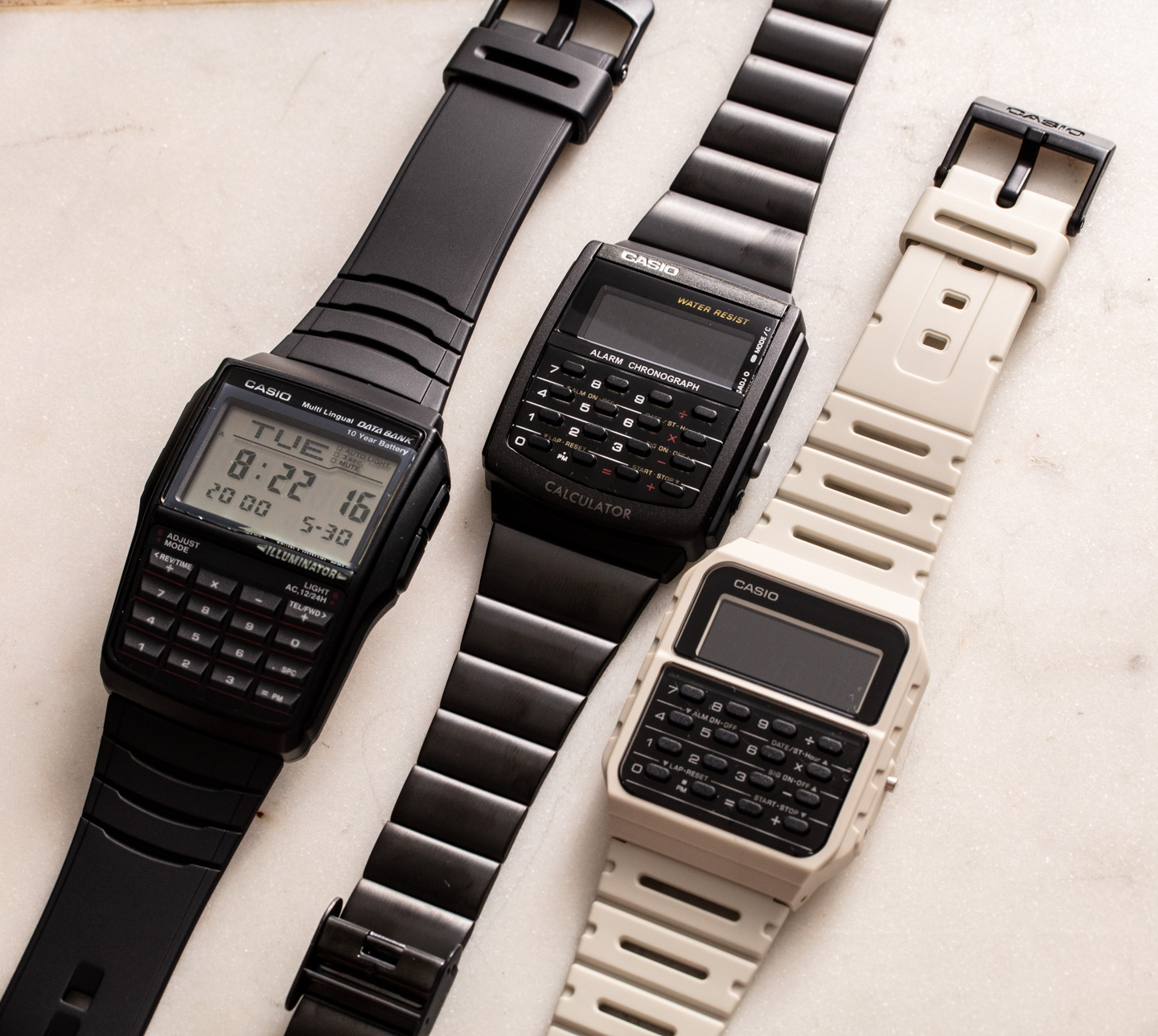 Features such as Casio’s “Illuminator” clear backlight competitor to Timex’s “Indiglo” meant that this was a very convenient watch to live with. The DBC32-1A also has one of the most pressable keypads of any Casio Databank calculator watch and is best for people who actually want to use their wrist-calculator at all. Unfortunately, the king of calculator watches also has the fashion appeal of a high-end wireless home phone handset. It just looks more like a remote control than it does an elegant wearable. Then again, if you really want to go for the “I’m wearing a calculator look,” this is the best of the breed for you. Price for the Casio Databank DBC32-1A watch is $69.95 USD. Learn more at the Casio website here.