Hangar Hamlet With Fortis Watches At The Reno Air Races

Leaning against the official race pylon, literally a telephone pole capped off with a white oil drum, I was instructed by the “cheez-whiz of Outer 4” that “if something goes wrong with the planes, run the other way [down the hill], away from the flight path. Don’t worry about your cameras, drop them, and go as fast as you can.” I looked at Andreas seeking reassurance, but he looked just as bewildered and unsettled as I. Redirecting my gaze, Jupp smiled at me as he stood under the service tent surrounded by Search and Rescue Officers, pylon judges, and race volunteers. “They’re coming over the ridge in 50 seconds,” yelled one of the volunteers. I do a quick wrist check of the Fortis Aeromaster and Andreas takes a look at his Fortis PC-7 Team Day/Date Aeromaster, as we count down the time before the jets come into view. Spotted, a bright yellow Czech-built Aerovodochody L-39 “Albatros” jet, and it’s coming toward us at around 500mph. 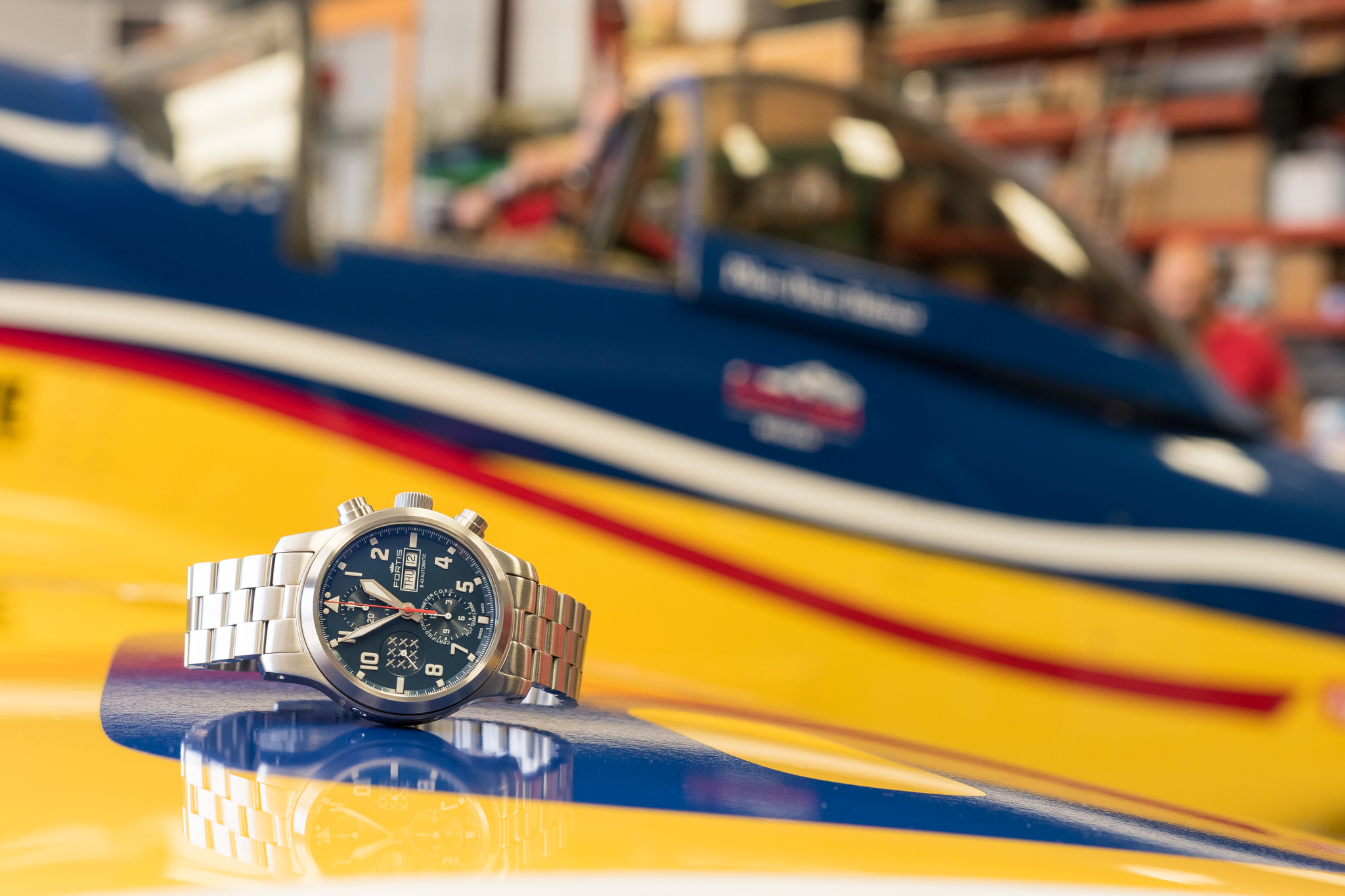 It all seemed a tad grassroots considering I was at the Reno Air Races (officially STIHL National Championship Air Races), a 50+-year-old event comprised of five days of air races, exhibition flights, invitationals, and air shows. Entering the pit area, I noticed it looked like a bunch of weekend warriors wrenching on their planes under designated tents, in stark contrast to the last air race I attended. Accompanied by Andreas, I made my way to an inconspicuous hangar named “Thunder Mustang Air Racing” with a simple poster on the door that read, “Watches Inside.” Once inside, there was a spread of watches displayed on two six-foot tables, display cases on tool cabinets, and a lounge area right next to the planes where the pit crew completed final inspections before race time. 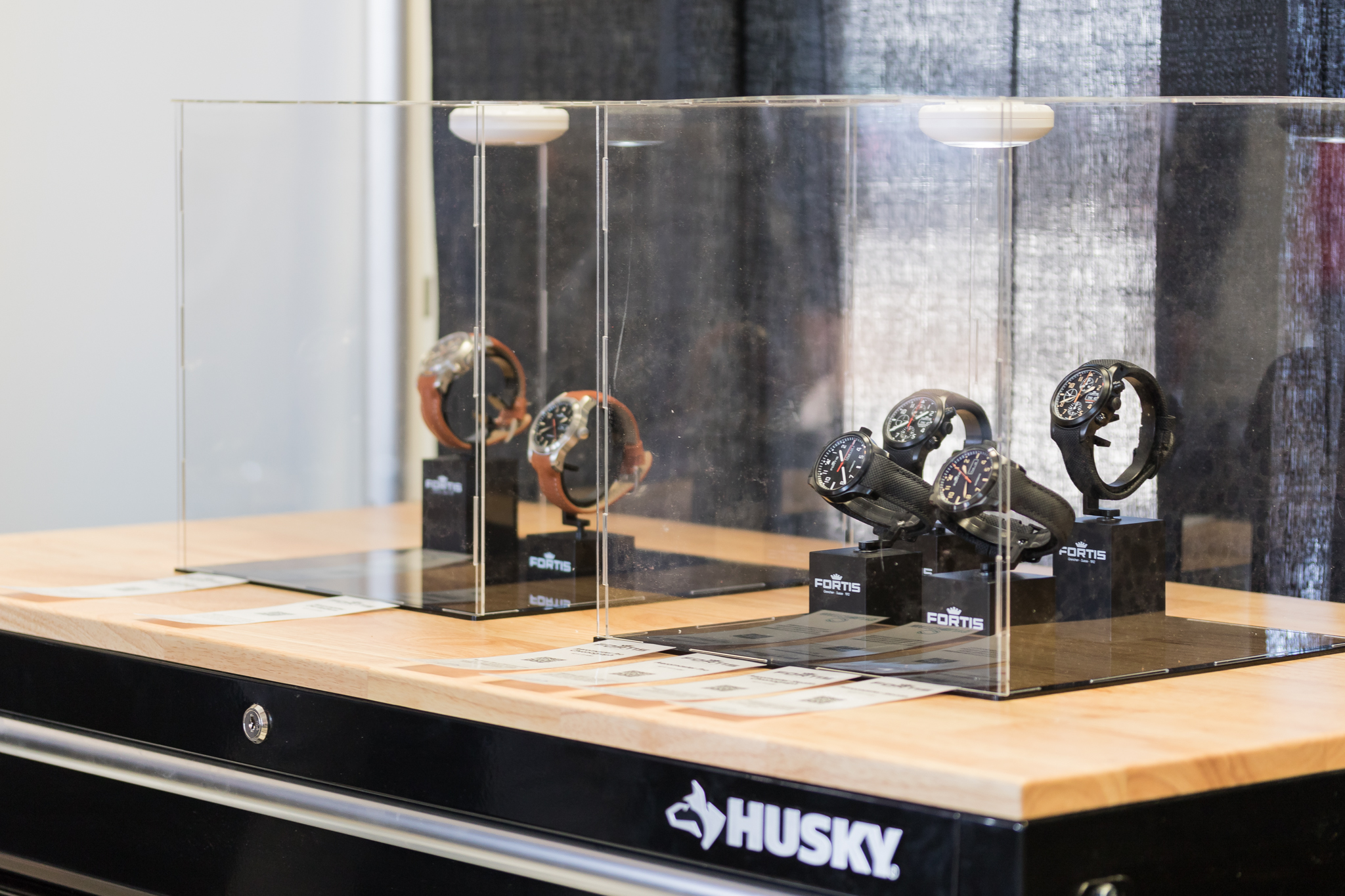 The setup is grassroots and guerrilla, introducing unsuspecting race fans with air- and space-inspired Swiss watches as they enter the hangar to get a glimpse of the planes. Prominently highlighted were the new Limited Edition PC-7 Team Chronograph and Day/Date watches created in honor of the Swiss Air Force Display Team’s 30th anniversary. Both watches come in the same 42mm stainless steel case with brushed finish, royal blue dial, and embossed solid case back. They also share a 3×3 pattern on the 9 o’clock running seconds subdial, which depicts the Swiss Air Force Display Team’s signature flyby formation and limited edition plaque screwed to the case. 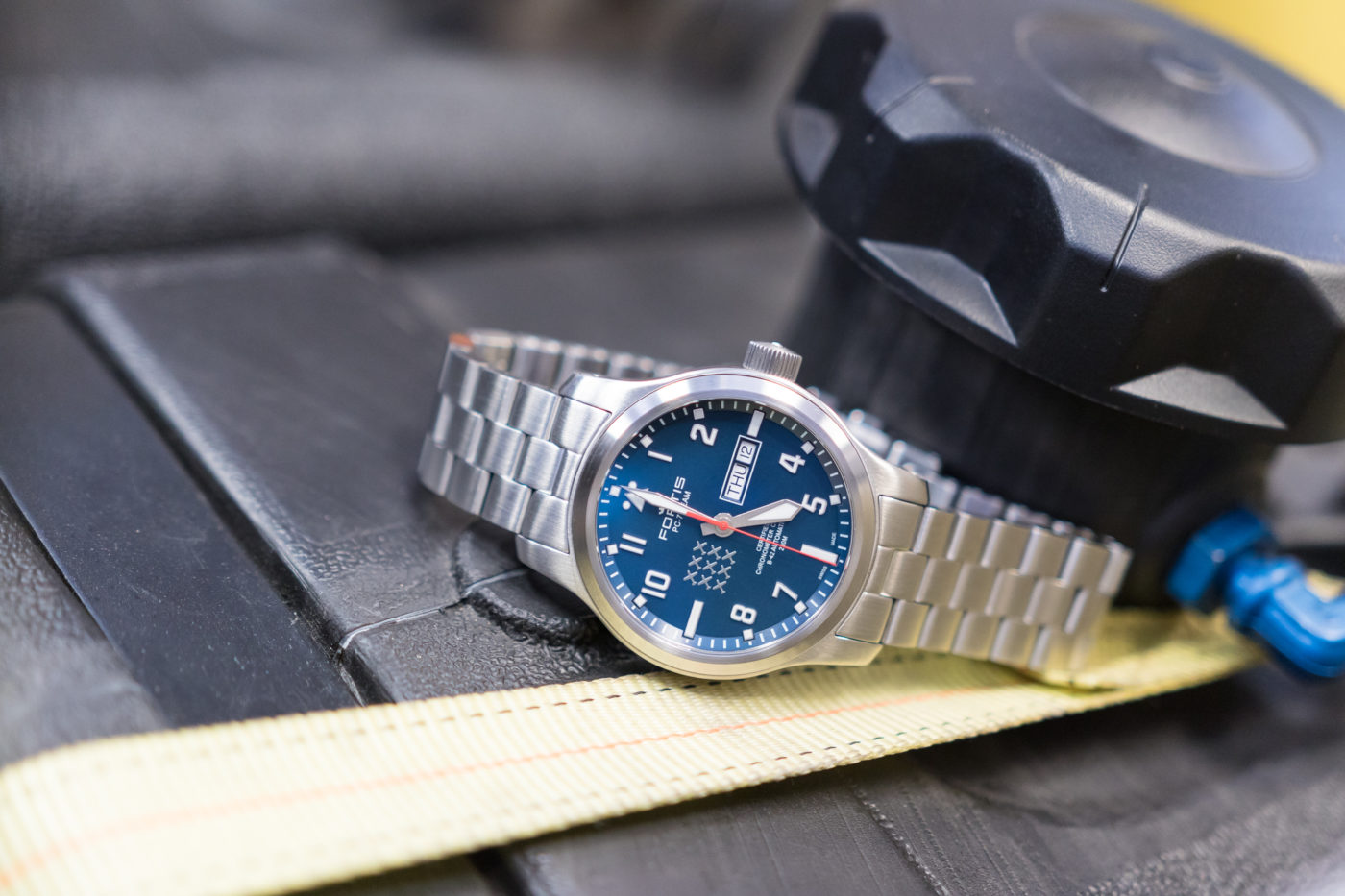 The royal blue dial is a lighter hue of navy blue, but with a punch of luminance, making the Arabic hour markers and hands stand out for easy legibility. The dial layout is clean and precise, but I felt it was too busy on the chronograph, less so on the day/date. Lorenz Aebisher (CEO) and Andreas Bentele (marketing manager) are both in civilian clothing donning red Fortis t-shirts that say “CREW” on their lower backs. Both armed with beers in their hands, they enthusiastically chat up the race attendees that come through the hangar doors looking for watches and planes. Andreas looks over and asks me, “What do you want to drink?” The Limited Edition PC-7 Team watches are the first watches created by the new management team comprised of five new members and captained by Jupp Philipp, Fortis Watches’ new owner. The watches were created with input from the pilots based on three criteria, which also happen to be what the PC-7 Team stands for: dynamism, elegance, and precision. The Dynamism comes from the fact that the watch is made to be a tool watch and represents the progress and evolution of Fortis Watches. Elegance is represented by the royal blue dial and Arabic numerals with a silver lining that also aids in readability. Finally, the Precision was accomplished by having the watches C.O.S.C.- certified. 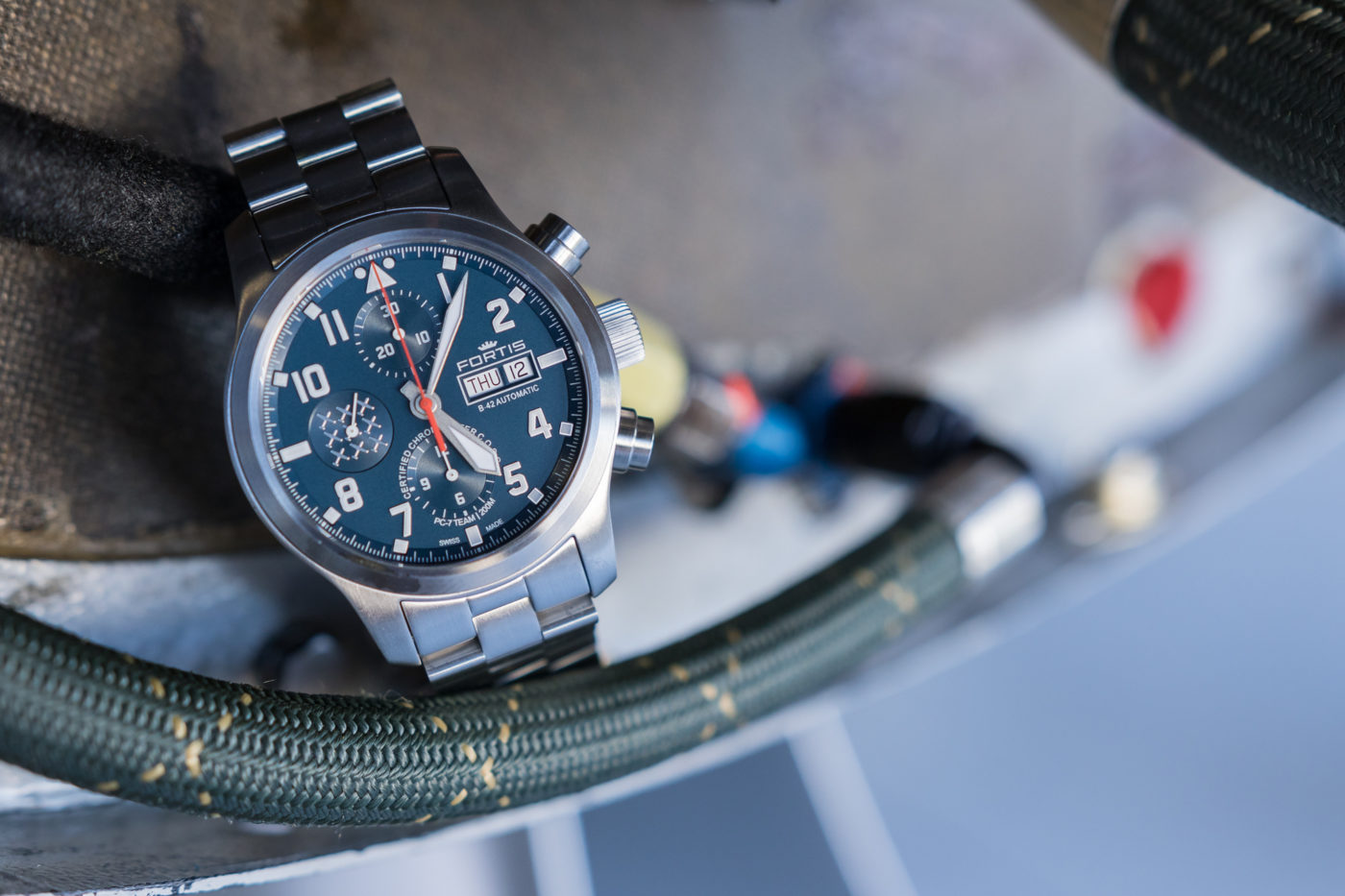 Fortis Watches is supporting two pilots in the Sport Class at this year’s air races with their main pilot being Peter Balmer. Jupp was very clear that they are not sponsoring teams or pilots, as that would be a business transaction. He is looking to cultivate and support passionate individuals who are striving for a goal, and Fortis wants to help them achieve this. He went as far as to say that, “If some squadron is coming here and they just want money because they need to furnish their team, and they say, okay, put your logo here and give me money, we will not do this.” 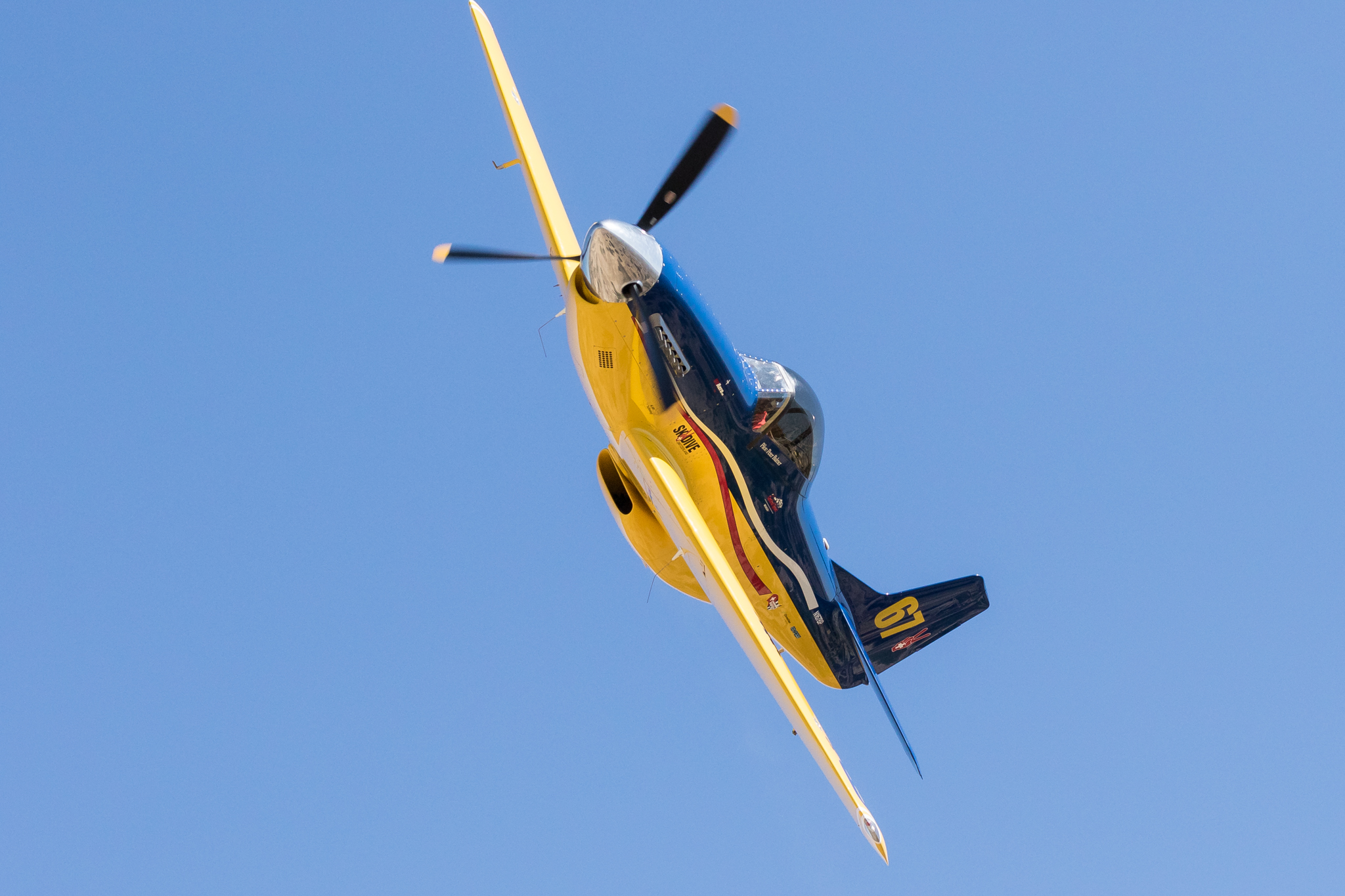 With a Belgian Wit in my hand, I began to walk beyond the VIP lounge area toward the pit crew and the exposed plane engine. I was told that most of the crew had been here installing a new 800+ hp engine until 2am, and then returned to do the final preparations at 5am the same morning. Peter Balmer’s airplane is a Thunder Mustang, which is a replica of the North American P51 Mustang and powered by a V12 Falconer Engine. I was also amazed to find out that the crew was 100% comprised of volunteers! This is not something you see when it comes to competitive motorsports, but it kind of made sense – I felt like I was part of a family of enthusiasts at a competition. The 42mm case size on the chronograph felt smaller on the wrist than anticipated and carried its weight well, with most of the weight sitting closer to the wrist. Interestingly, the day/date looked larger and seemed like it was taking up more wrist real estate due to its flattering and non-beveled profile.

The case and lugs carry the B-42 DNA with their chunky talon-like curves and beefy screw lugs that seem to mimic the rivets on the outer panels of planes. The flat, brushed stainless steel bracelet that comes on the chronograph is finished well for the price point and reminds me of the first generation Montblanc Star collection bracelets with the equally sized triple links but with a more utilitarian finish. I guess you could also say it’s what would happen if a Montblanc Rieussec bracelet and a Rolex Submariner oyster bracelet had a child. 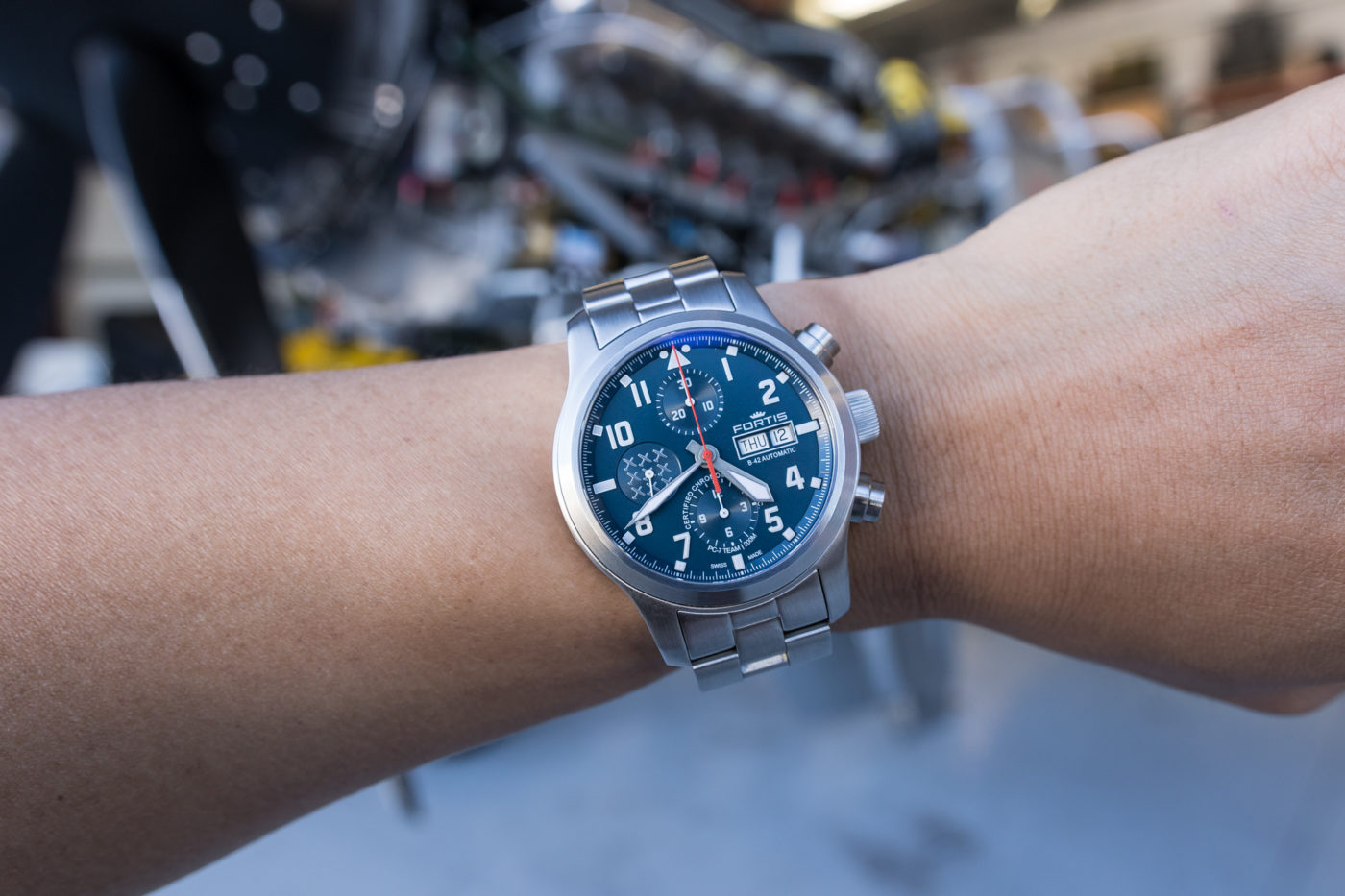 Walking past the planes, I navigated my way through the dozen or so banquet rounds that were being prepped for the sport class pilots who would come by for dinner after the races. Fortis was providing the food and drinks, and rumor had it that it was a rager the night before, so I was looking forward to the usual craft beers and hors d’oeuvres that accompany these types of events. 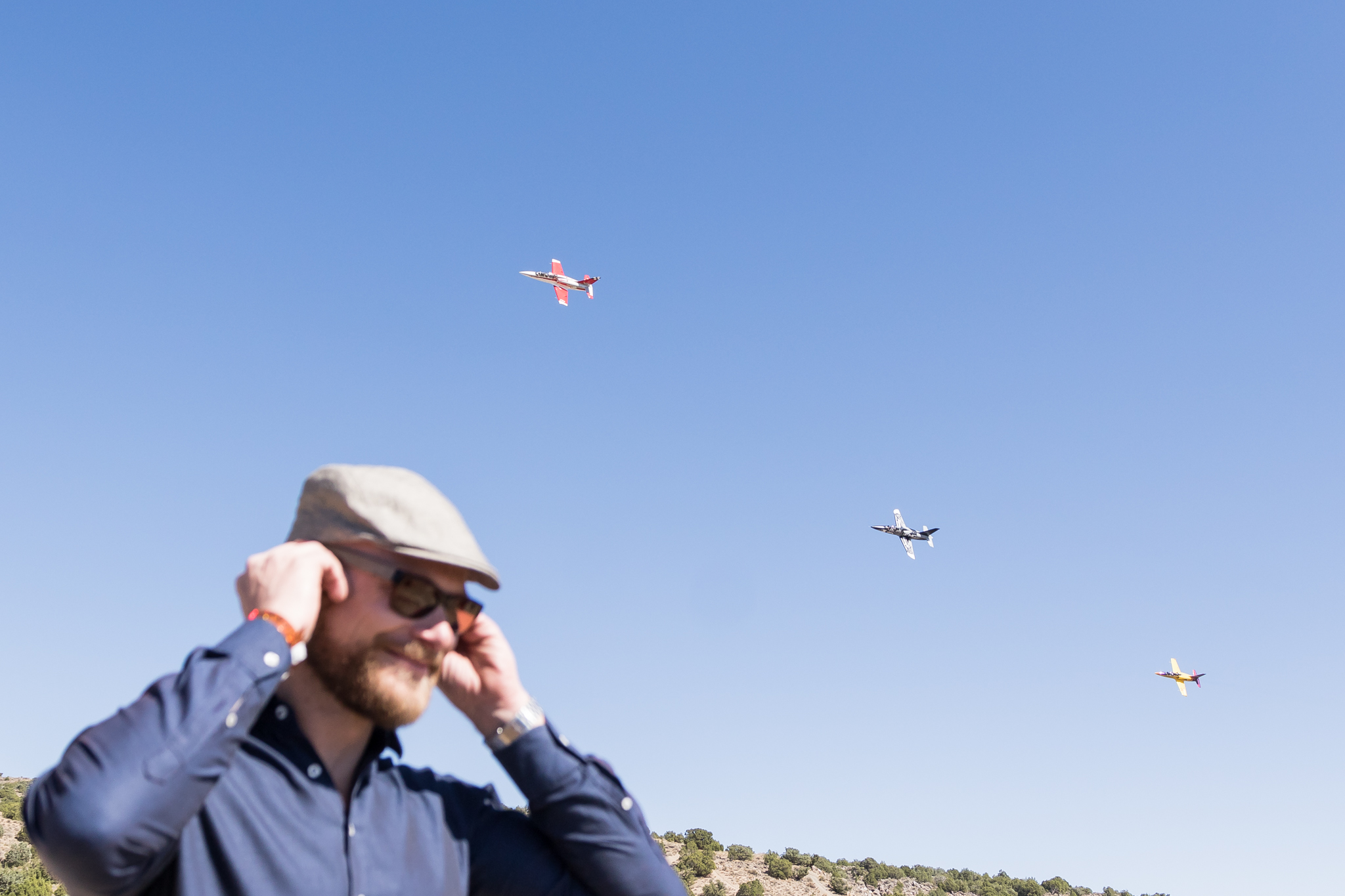 Maybe it was the beer or the ear-splitting sound waves coming from the squadron of Thunderbirds, but I had a hard time overlooking the fact that the length of the bracelet end links didn’t line up with the curvature of the lugs and the first flexible link was restricted in its movement. This left part of the bracelet link exposed and the bottom part of the lug protruding downward all by itself. On my smaller wrist, it wasn’t a bother, as it sat above my wrist, but I could potentially see it digging or at least touching the wrist of larger wristed wearers. On a leather strap, the watch-to-strap profile looks great and on my wrist, the angle of the lugs downturn lined up well with the angle of the straps when worn. Pilots started showing up and so did the food. Where were the fancy tiny bites and roll-out bar with bartenders? None were to be seen, only five beat-up coolers and a bunch of food in foil and saran wrap. This was a straight-up backyard BBQ and tailgate territory, and it felt increasingly correct for the environment. The whole event seemed like a family get-together, and maybe that’s exactly what Fortis is trying to convey with regard to the new direction of its brand, leadership, and future products.