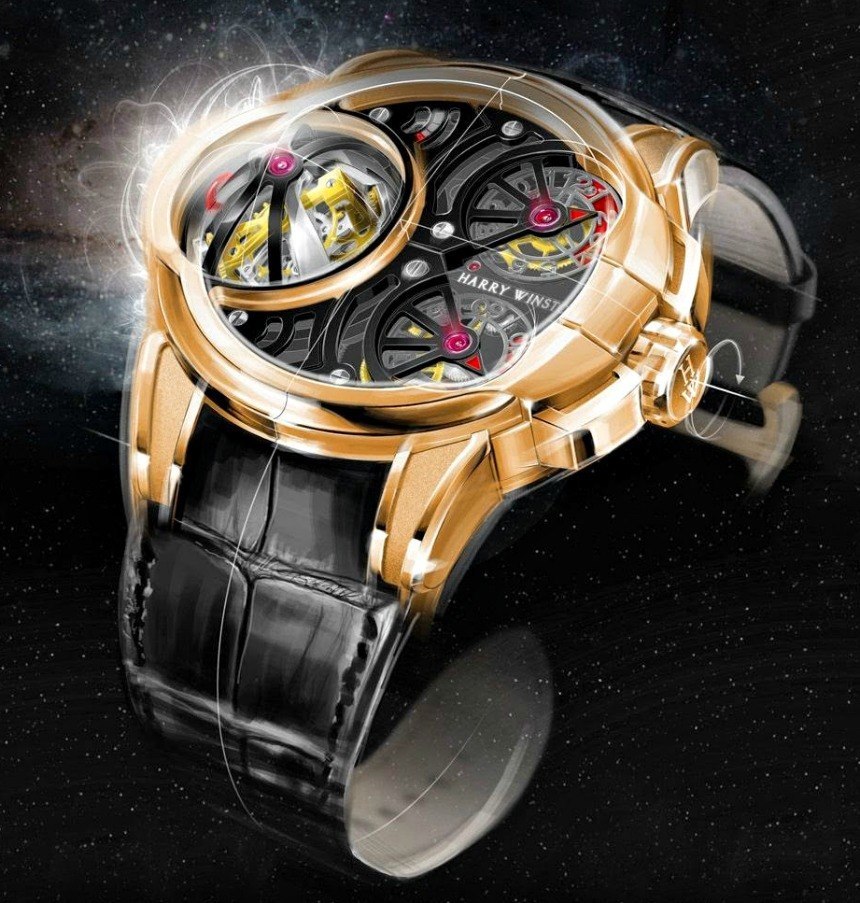 Harry Winston did not show a final Histoire de Tourbillon 5 watch at Baselworld 2014. In 2013 they did show the Histoire de Tourbillon 4. All that is available of the 5 are some renderings of what the watch will look like, and given Harry Winston’s typical practices, we expect the timepiece will be slowly developed and released… whenever they feel like doing so. Swatch Group purchased the brand so that they would have a high-end jewelry company under their umbrella of brands. In a sense it was done because The Swatch Group’s relationship with Tiffany & Co. fell apart, so rather than partner with a company they simply purchased it.

In the early 2000s, when Max Busser was heading the watch division at Harry Winston he instituted the Opus collection, where Harry Winston collaborated with high-end independent watch makers to produce amazingly complex limited edition men’s watches. It was a bit out of character for a brand known for diamond-studded timepieces and other items of elegance. The Opus collection helped spawn some other interesting men’s collections in the brand as well as the Histoire de Tourbillon–which I always called “Opus light” (though not “light” from a price perspective). 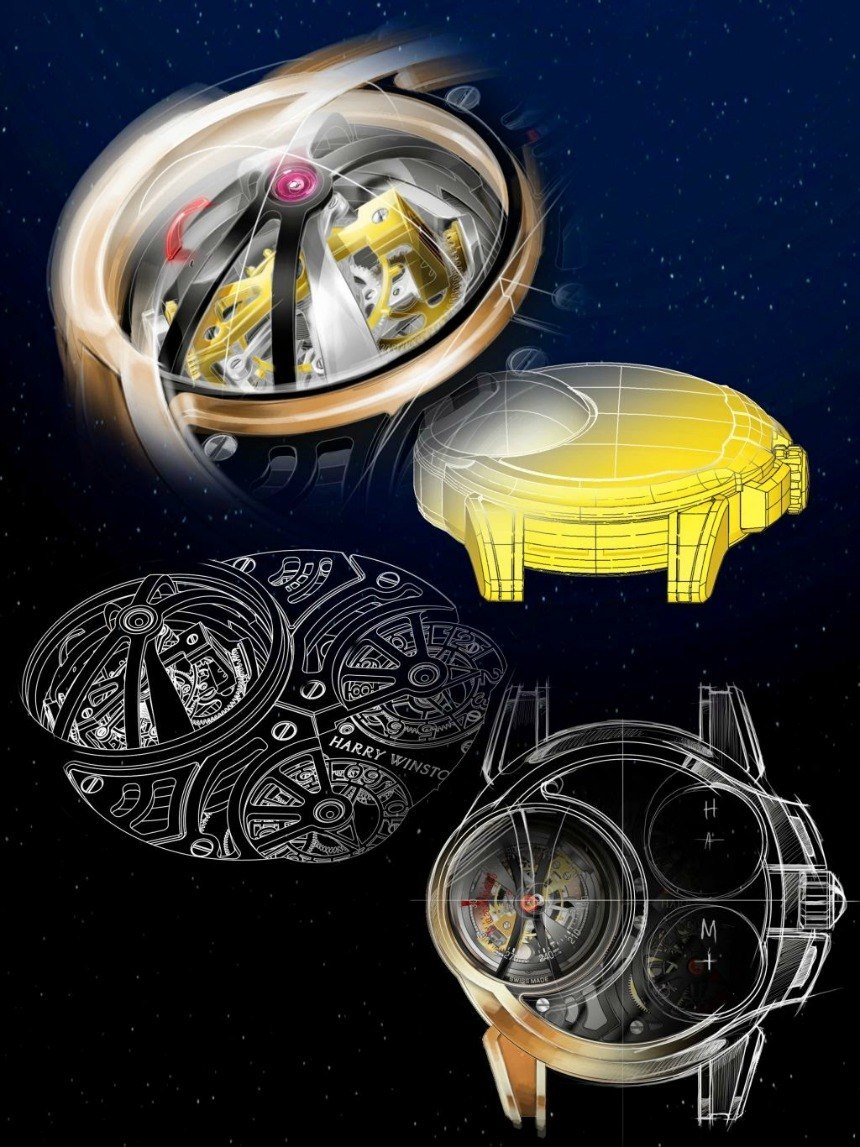 The point of the Histoire de Tourbillon collection was to go wild with the concept of tourbillons and overall case design. The Histoire de Tourbillon 5 has a triple axis tourbillon which exists in a bulbous cage under the sapphire crystal bubble on the left side of the case. The triple axis tourbillon is a tourbillon that revolves on three axis points in a series of cages. The outermost cage rotates once each 300 seconds, the middle cage, once each 75 seconds, and the innermost cage rotates once each 45 seconds. Note that none of them are a standard 60 second tourbillon.

Inside the watch is a manually wound movement known as the caliber HW4303, made up of 381 parts that has a 50 hour power reserve which will operate at 21,600 bph (3Hz). The tourbillon elements contain 143 parts and much of the movement is produced from titanium. Functionally, the movement will indicate the hours and minutes on separate discs on the right on the dial, and there will be a seconds counter near the tourbillon area. Above the tourbillon is a small power reserve indicator. 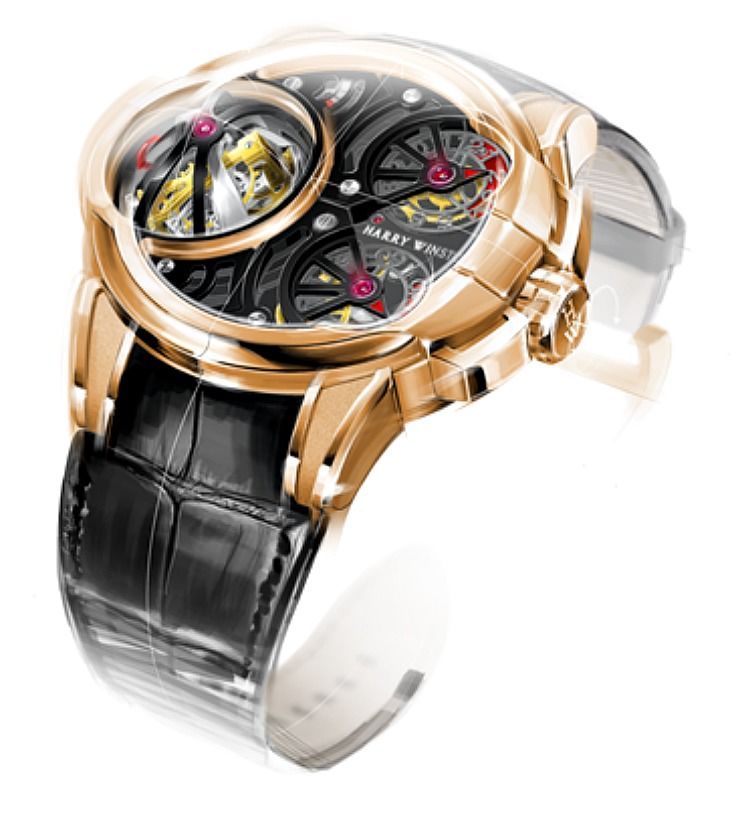 While I can’t say for sure that Harry Winston’s new ownership will completely abandon watches like this in the future… I am pretty certain that will be the case. It isn’t really Swatch Group style, and I don’t think it is what they have in mind for the brand moving forward. Though they do need to keep the “legacy” of the brand alive for a while as they transition it to fit their ideals. So the Harry Winston Histoire de Tourbillon 5 might be the last of its kind, a period in Harry Winston’s history that I, for one, will miss and have always been surprised by and enjoyed. The Histoire de Tourbillon 5 will be ref. HCOMTT47RR001 and will be limited to just 20 pieces–the same as each other Histoire de Tourbillon model. harrywinston.com