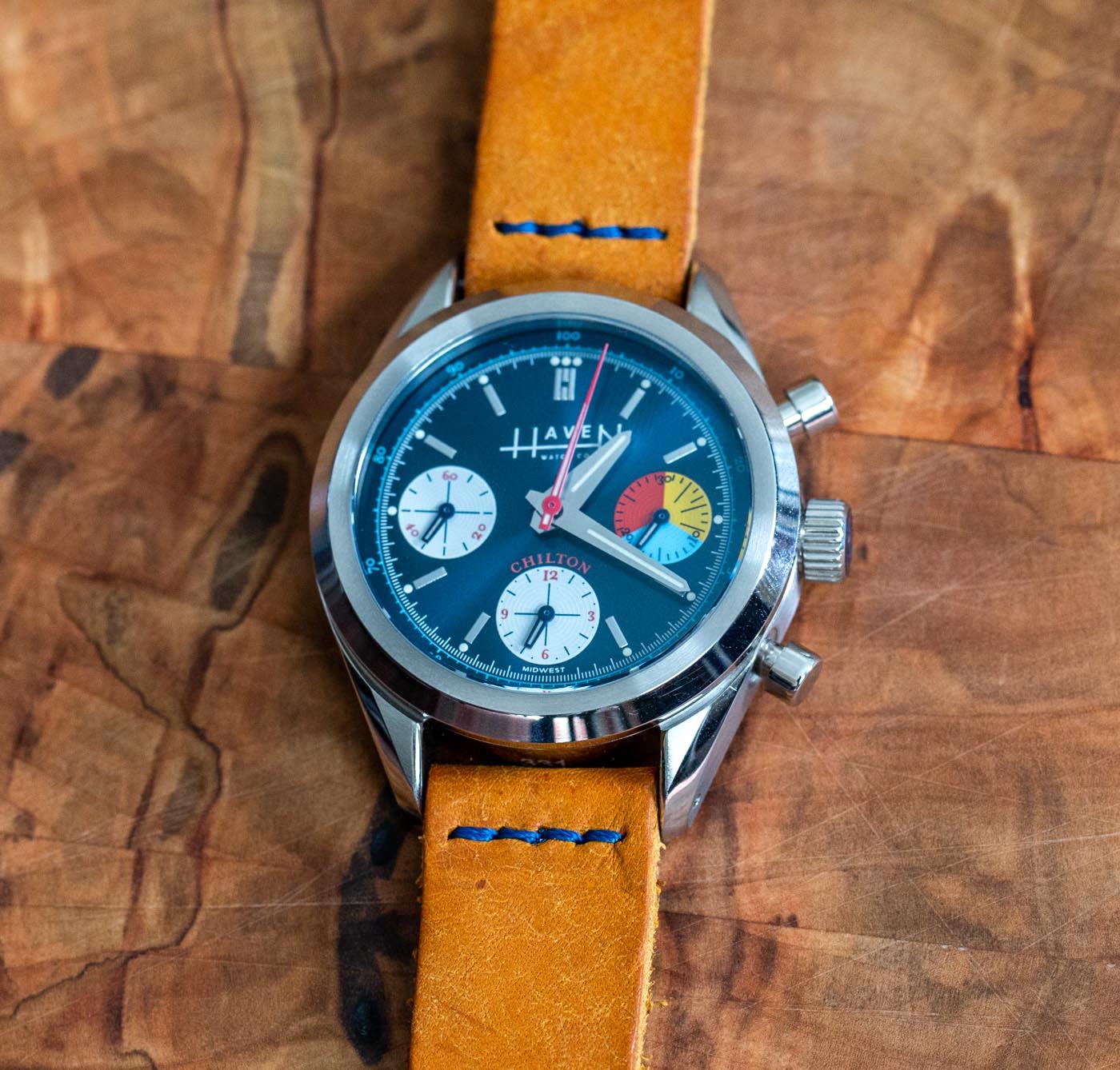 Hands-On: The Haven Chilton Watch Is A Slice Of Grassroots Midwestern Artisanship 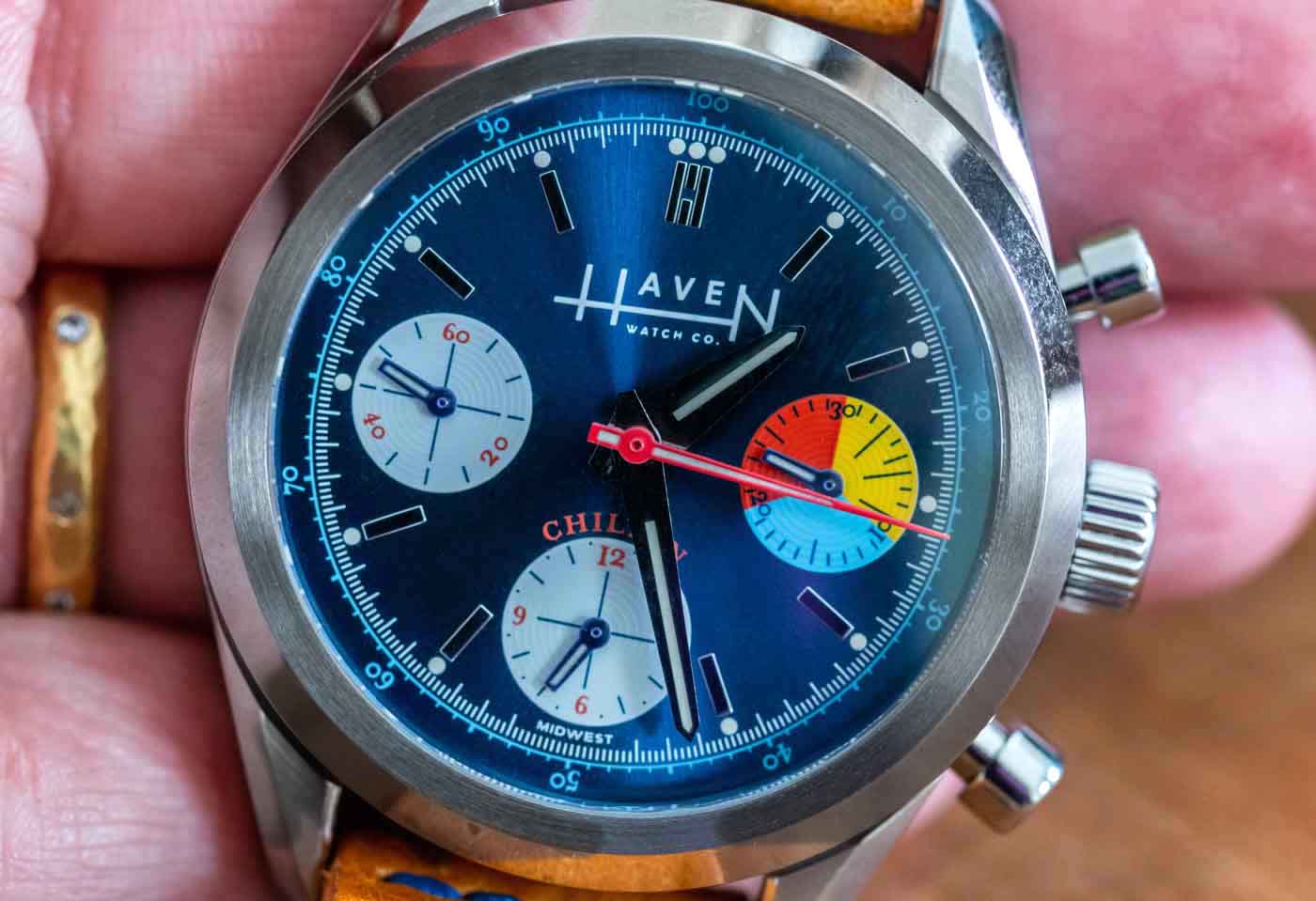 Haven Watch Co.’s founder, Weston Cutter, is a university English professor in Indiana, an unlikely suspect for launching a watch brand. But Cutter’s love of watches — specifically, vintage timepieces — is the backstory that makes Haven such a compelling new concept. That, and the intentional artisanship the company embraces as its mission.

Indiana is not exactly the center of the horological universe, but the conceptual lineage for the Haven Chilton (reference 1031) runs deep. Cutter’s father is a watchmaker, and he gave his son an old Tissot chronograph in 2012. The movement powering that watch, the Valjoux 7734, sparked in Cutter a fascination with vintage watches — dare we say obsession?

The practicalities of making a watch himself, however, didn’t come into focus until Cutter met Donovan Paradise, a watchmaker in northeast Indiana whom he’d enlisted to repair the vintage Leonidas moonphase watch he’d bought for his dad. Their ongoing conversation is where everything got real, and the pair decided to set about attempting to design their very own manual-wind chronograph. The first step was to find the right movement around which they would build it.

Cutter and Paradise came close to adopting two different movements (that shall remain unnamed) and ultimately rejected both after testing them because of their too-large mainsprings and bad tolerances. They got a wild hair to write to Sellita and inquire into modifying its W510 movement, confident that they could convert it to a manual. As fate would have it, Sellita was in the process of crafting precisely what Cutter and Paradise were looking for: a manual-wind with a 3/6/9 dial layout (which the Swiss manufacture debuted at Basel last year) that results in a visually appealing triangular symmetry. The Sellita SW510M also offers a power reserve of up to 50 hours on a full wind. And at 6 o’clock is the “Midwest” stamp, displayed as proudly as many watches display “Swiss Made.” 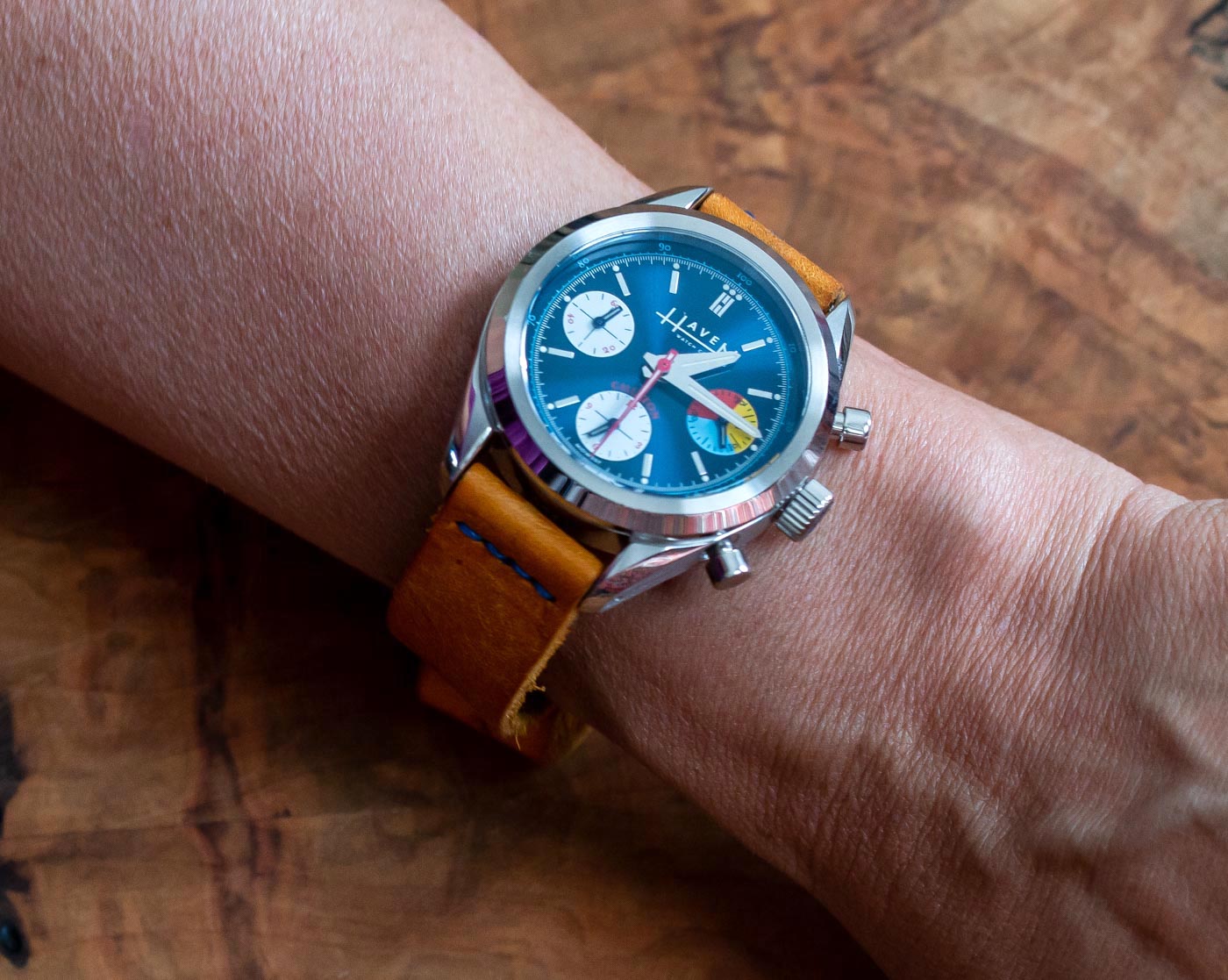 At 37.5mm in diameter, the watch occupied a large presence on my small wrist, but sat comfortably, nonetheless. The bracelet was too large for me at its smallest, but I was more enamored of the mustard-colored (or ochre) 18mm leather strap, anyway; it was a breeze to change out with the tool provided. (It’s not specifically designed for women, but it would work well on any average-sized woman’s wrist.) Additional strap options include pebbled blue and gray with red stitching. More importantly, the size of this watch sets it squarely in classic “vintage” territory. 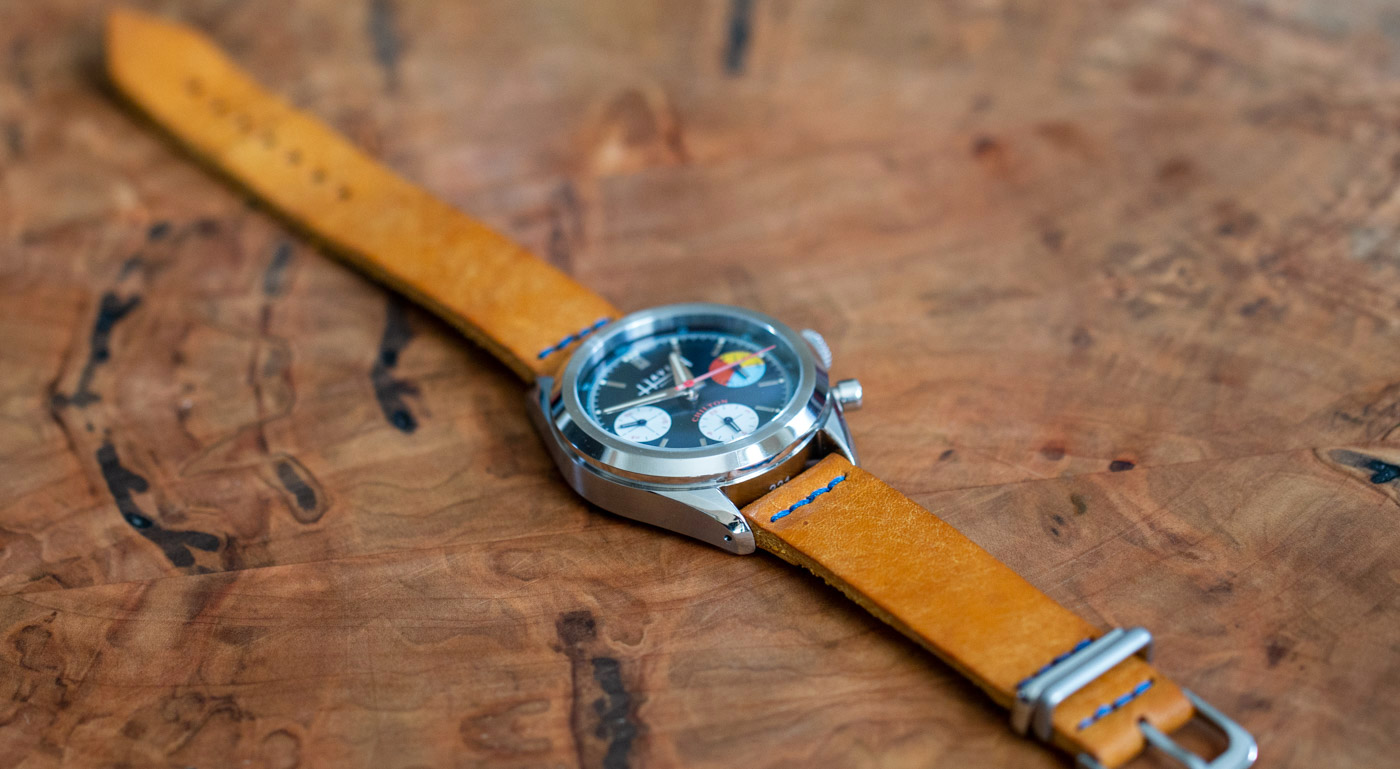 There are two dials currently available: a silver dial with blue subdials, and a blue dial with silver subdials. I spent time with the latter iteration, which I found to be highly legible and whose contrast communicates a confident presence even across a room. The silver dial is attractive but in a slightly more austere vein. I’m glad Haven decided to skip a date window, as there’s nowhere on the dial it would reasonably fit.

The 316L stainless steel case has both brushed and polished surfaces for contrast and a fixed bezel. The watch has a double-domed, AR-coated sapphire crystal and a moderate height off the wrist of 13.1mm. 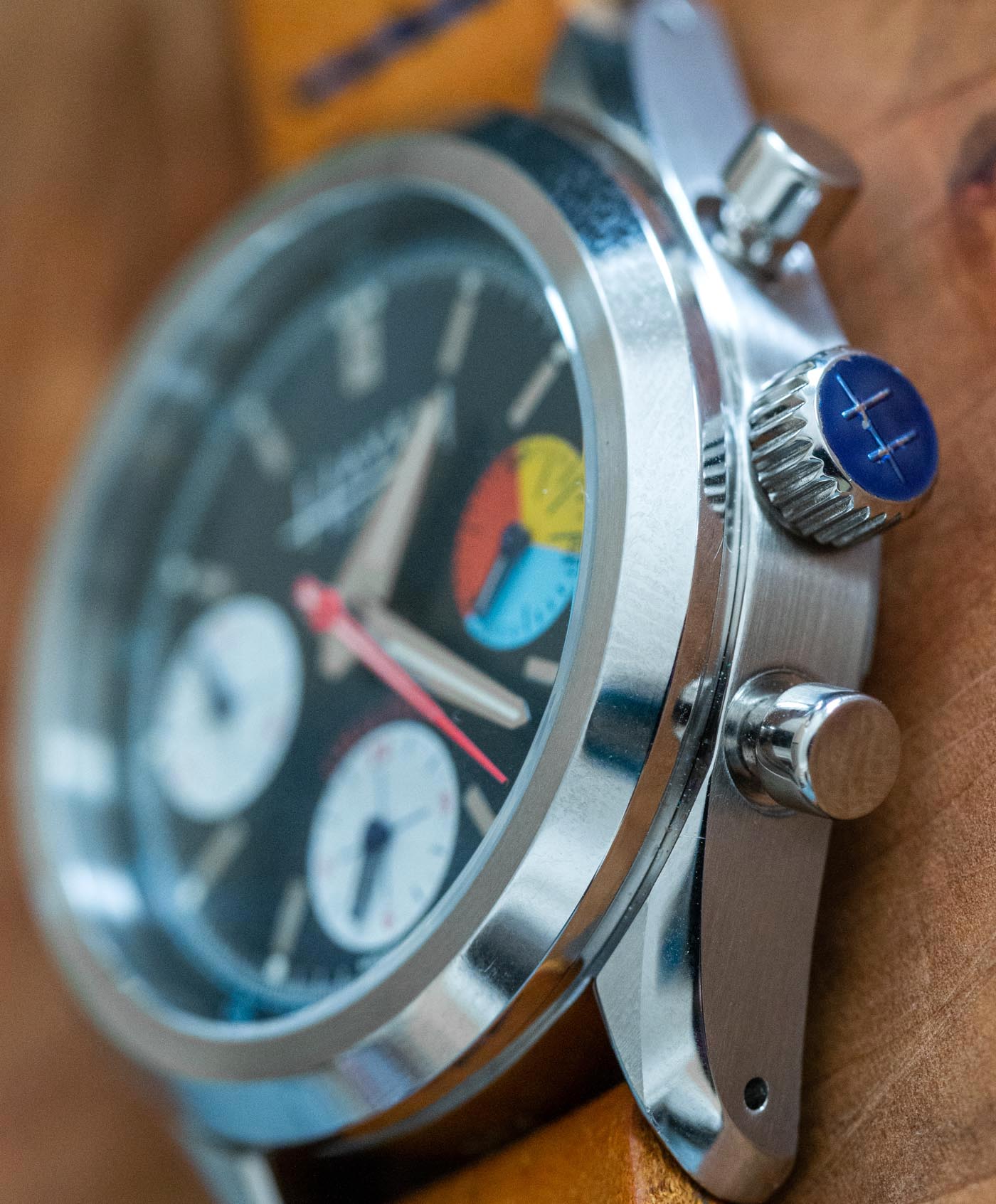 18mm drilled lugs (47mm lug-to-lug) have multiple chamfers, while the crown is easily grippable and marked with the letter “H” in an implicit branding touch that doesn’t hit you over the head. The solid titanium screw-down caseback ensures 3ATM of water resistance. On it is etched a map of the Great Lakes, a tribute to the watch’s origins. 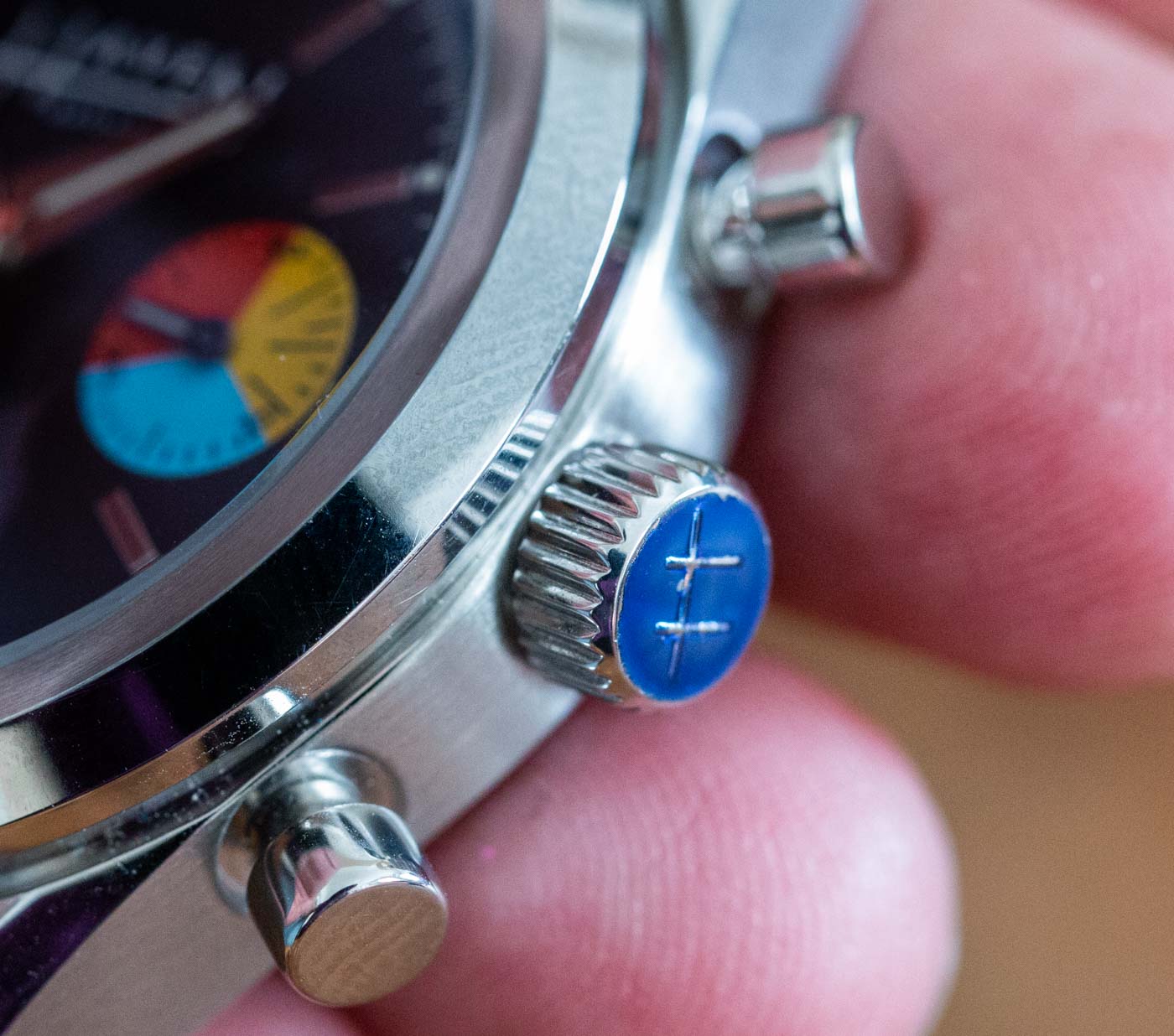 There’s a dearth of bling-free chronographs made for women, and while this watch certainly isn’t designed for women, its proportions put it in range of smaller wrists. I would easily look to it for anyone who’s in the market for a well-designed chronograph at a reasonable price point, especially given how personalized the service is. (The founder’s email address is on the website, and he answers messages!)

Though the movement is Swiss-made, the watch’s other components are a hodgepodge of sourcing – the cases, dials, and hands come from Asia, and the straps are sourced locally and cut by hand. In a daring move as far as marketing decisions go, the watch comes in a cardboard box that’s fully recyclable. Though some might prefer a swankier presentation, I appreciate this overt gesture of maintaining a light environmental footprint.

The competition for this watch includes big names that cost a good bit more: the Oris Diver 65 Chronograph; the Montblanc 1865 Automatic Chronograph; and the Vertex MP45 — all of these watches feature some variation on the theme of the Sellita SW510, and all are at least double the price of the Haven Chilton. For this reason, but even more on its own merits, this watch is a strong contender in its category.

There’s a case to be made for the whole affair as the epitome of American ingenuity, which an eye toward high quality and cost-savings, simultaneously. The Haven Chilton, with silver dial and blue subdials or blue dial with silver subdials, retails for $1,799 USD and is available now. Learn more at www.havenwatches.com.