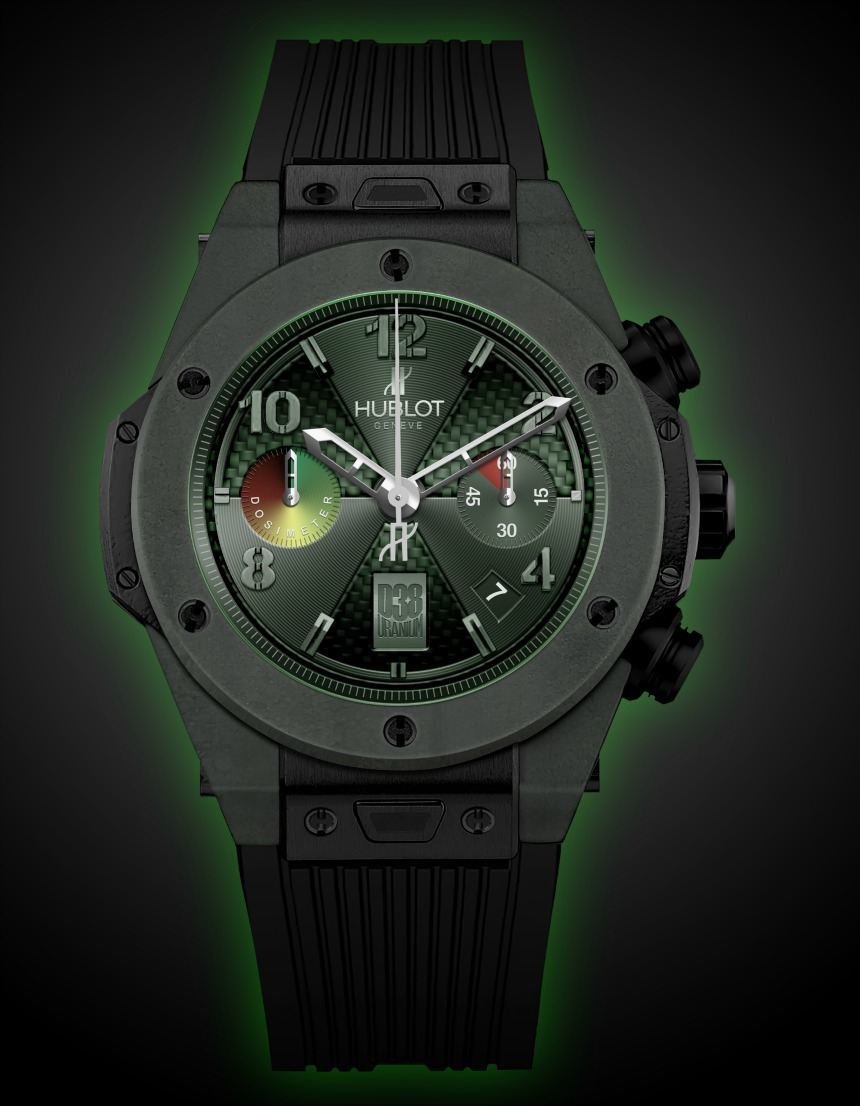 Celebrating A Decade Of Big Bang

Ten years ago in 2004, Hublot first released the Big Bang: a timepiece that would forever change the brand and would help put then owner (now Chairman) Jean-Claude Biver on the minds of the general public as well as arguably make him the most important person in the modern watch industry. Under Jean-Claude Biver, the design philosophy at Hublot has been “fusion,” or rather the combination of a range of materials in their ever expanding catalog of watches.

Over the years, Hublot has produced timepieces that have featured an array of rare or unique materials not often seen in watch making, such as tungsten or magnesium, and developed their own materials and alloys such as King Gold and Magic Gold. The pursuit of new and unique materials for horology is really the search for emotion and exclusivity. As one of the ultimate lifestyle brands, Hublot wanted to do something special and very difficult for the 10th anniversary of the Big Bang.

Uranium As An Exclusive Luxury Metal

As a limited edition, Hublot presents the Big Bang Atomic D-38, the first ever wrist watch produced from the radioactive material uranium. According to Hublot, the company wanted to produce something that no one else has done or would do. Their desire was to exhibit the type of risk-taking audacity Hublot clients have come to expect from the brand. Without holding back, it was decided to use a secret resource owned by the brand. 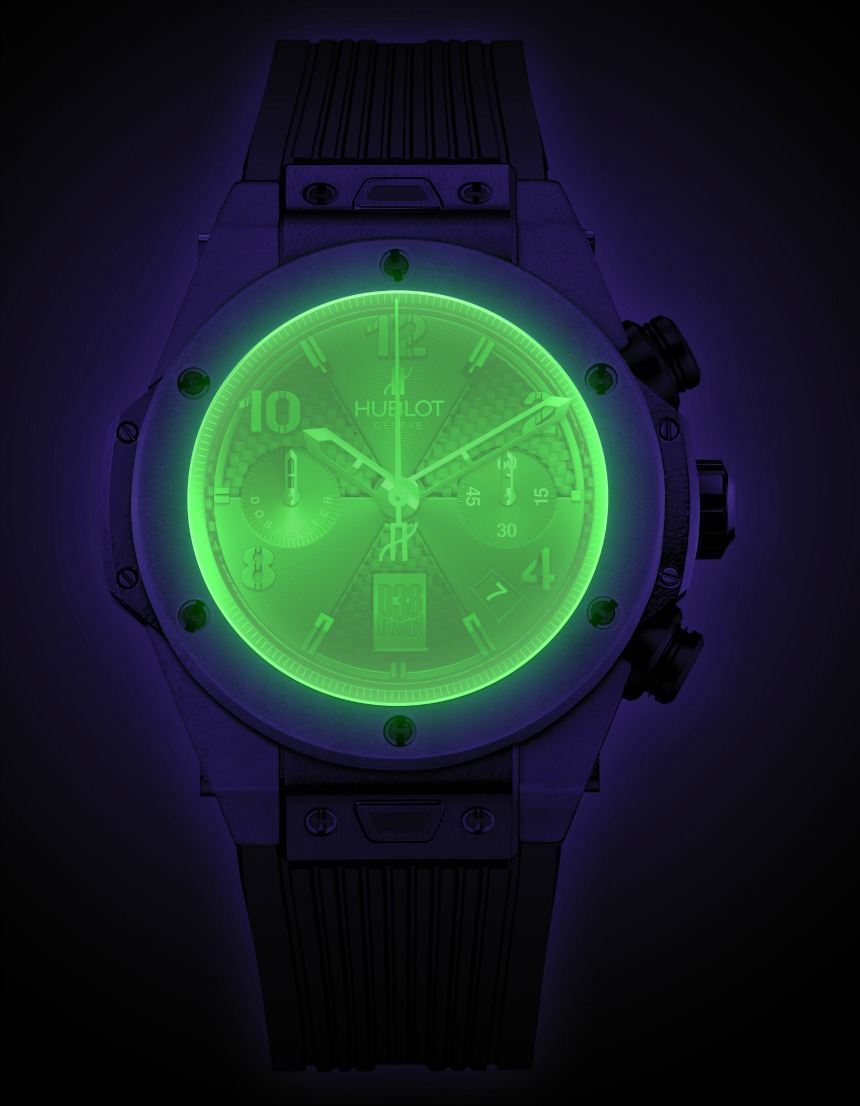 A few years back, a loyal Hublot client was not able to pay for an order of watches due to an unforeseen financial scenario. Upon Hublot attempting to collect the bill, the client proposed a barter in order to settle the debt. Historically, being a dedicated enthusiast of the brand, Hublot decided to hear the client out. After much negotiating (and a series of rejected offers) it turned out that the collector was interested in more than just watches. It happened to be that the client was also a sort of amateur geologist, and through circumstances under which Hublot did not request further explanation, happened upon a bulk of depleted uranium metal, which is also known as D-38.

Hublot admits that while even depleted uranium is still radioactive, it is not nearly as dangerous as Uranium U-238 or U-235. In fact, Uranium D-38 even has some civilian uses. Of course, uranium D-38 is also used for a lot of military applications. In addition to being used as radioactive shielding material, the extreme density of D-38 makes it a prime material for ballistic ordnance as well as armor plating. Hublot says that “wearing this stuff is like wearing a shield of armor on your wrist!”

The Beautiful Appeal Of Forbidden Fruit

Depleted uranium is also very heavy. At about 19 grams per cubic centimeter, it is just a bit lighter than pure platinum, though it doesn’t quite polish up as nicely (unfortunately). Uranium comes in a range of colors but people tend to associate the metal with glowing green. Most depleted uranium is a dull to deep gray, and some uranium is silvery-white. The Big Bang Atomic D-38 watch does not disappoint those who imagine the glow of radioactive material. The crystal of the watch is produced from uranium glass, a unique material that glows green under the right lighting conditions.

Hublot decided to base the Atomic D-38 on their new 45mm wide updated Big Bang case and develop a unique complication particularly well-suited to the watch’s radioactive properties. Hublot understands, and even suggests that customers who order an Atomic D-38 not wear it all the time. In fact, like a fine aged spirit, only a small amount should be enjoyed at a time. When the Big Bang Atomic D-38 watch is not in use, Hublot supplies a lead presentation box to store the watch when it is not worn in order to protect the lives of children and animals. 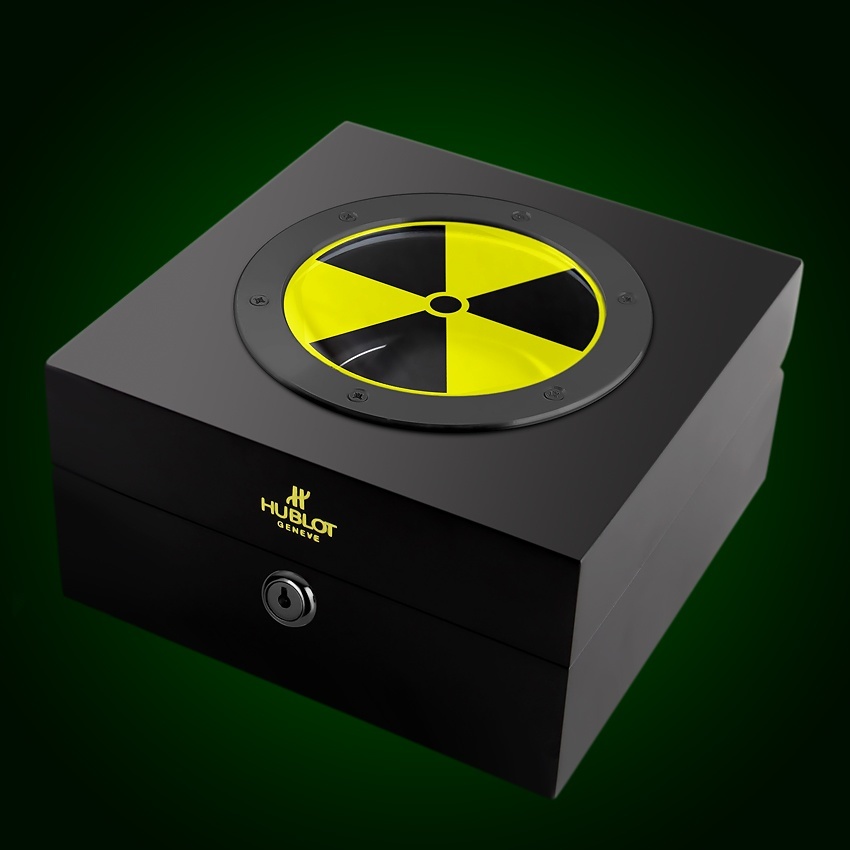 There is something very macho about flirting with danger. Sure, radioactivity can cause an array of harmful cellular damage, but so can smoking and people still do that. The science is unclear as to just how unsafe depleted uranium is, and Hublot doesn’t suggest wearing it full time. In fact, if you really need a watch to wear with a radioactive protection suit, this would be it. Having said that, Hublot has been advised that under certain circumstances deleted uranium may be possible to wear on one’s wrist and the nature of the timepiece’s particular complications is dedicated to measuring that time.

Built With A Radioactive Monitoring Complication, For Your Health

In addition to the time, the Big Bang Atomic D-38 watch contains a chronograph and an analog dosimeter. Unlike a giger counter, a dosimeter is a measurement device used to indicate an individual’s exposure to radiated energy. The dosimeter scale is represented via a colorful gradient subdial on the left of the dial. When the indicator hand moves into the yellow and red areas it is time to take off the Big Bang Atomic D-38 watch. Further, the watch contains a 60 minute chronograph. Hublot suggest starting the chronograph when the user puts on the watch, and using it to ensure that the watch is worn for no more than 45 to 60 minutes at a time.

The dosimeter sensor is located in the strap so as not to be entirely influenced by the radioactive energy output from the watch case. Hublot felt that it would have been entirely irresponsible to produce a timepiece from a harmful material without offering the wearer an ability to gauge how long they could be around it. Hublot reminds us that it is dedicated to not only client satisfaction, but also to the environment.

A radioactive Big Bang would not be complete without an atomic warning label on the dial. The atomic symbol has been thoughtfully integrated on the dial and includes carbon fiber– another material Hublot is known for helping to popularize. Combined with the modern 45mm wide case, the dial of the D-38 watch further hearkens back to the original Big Bang design of 2004 for this 10th anniversary celebration piece. 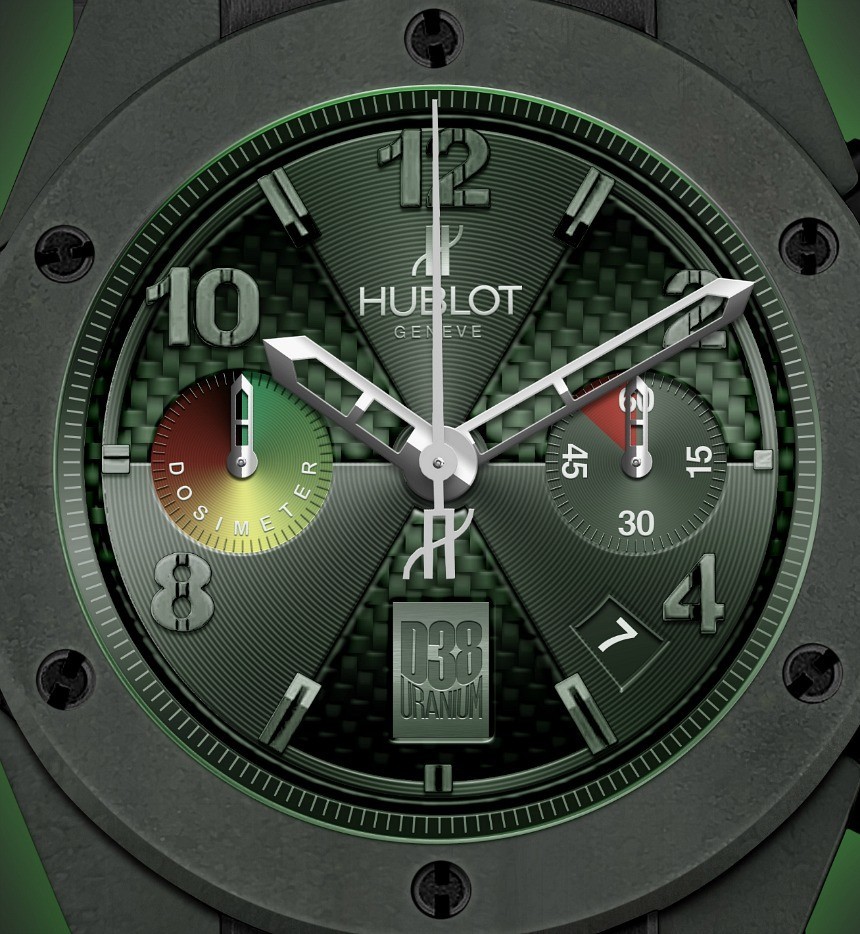 Make Others Glow Green With Envy

Customers interested in a Big Bang Atomic D-38 watch will need to sign a series of legal disclosures including prohibitions from reselling the watch for restricted use as well as holding Hublot free from all manners of liability. Further, the watch is actually classified as nuclear waste material for legal purposes and the buyer agrees to handle it with due care according to relevant laws and regulations. Hublot admits that it was a legal and logistical headache not only to produce the watch, but also to consider selling it. Though in the end they feel that the hoops they will need customers to jump through in order to purchase the timepiece is just another variety of the luxury buying experience.

The limited edition Hublot Big Bang Atomic D-38 watch is the ultimate in forbidden fruit and exclusivity. We covet the unattainable and desire that which is dangerous. Hublot has successfully tapped into the deepest elements of the human psyche in developing what is perhaps the most macho masculine watch in existence. Uranium is as deadly as it is powerful, and there is no better way to remark on your own badass lifestyle than (for a limited time each week) to wear a timepiece made from depleted uranium. Hublot will produce just 10 pieces of the Big Bang Atomic D-38 watch at a price of $100,000 each. hublot.com