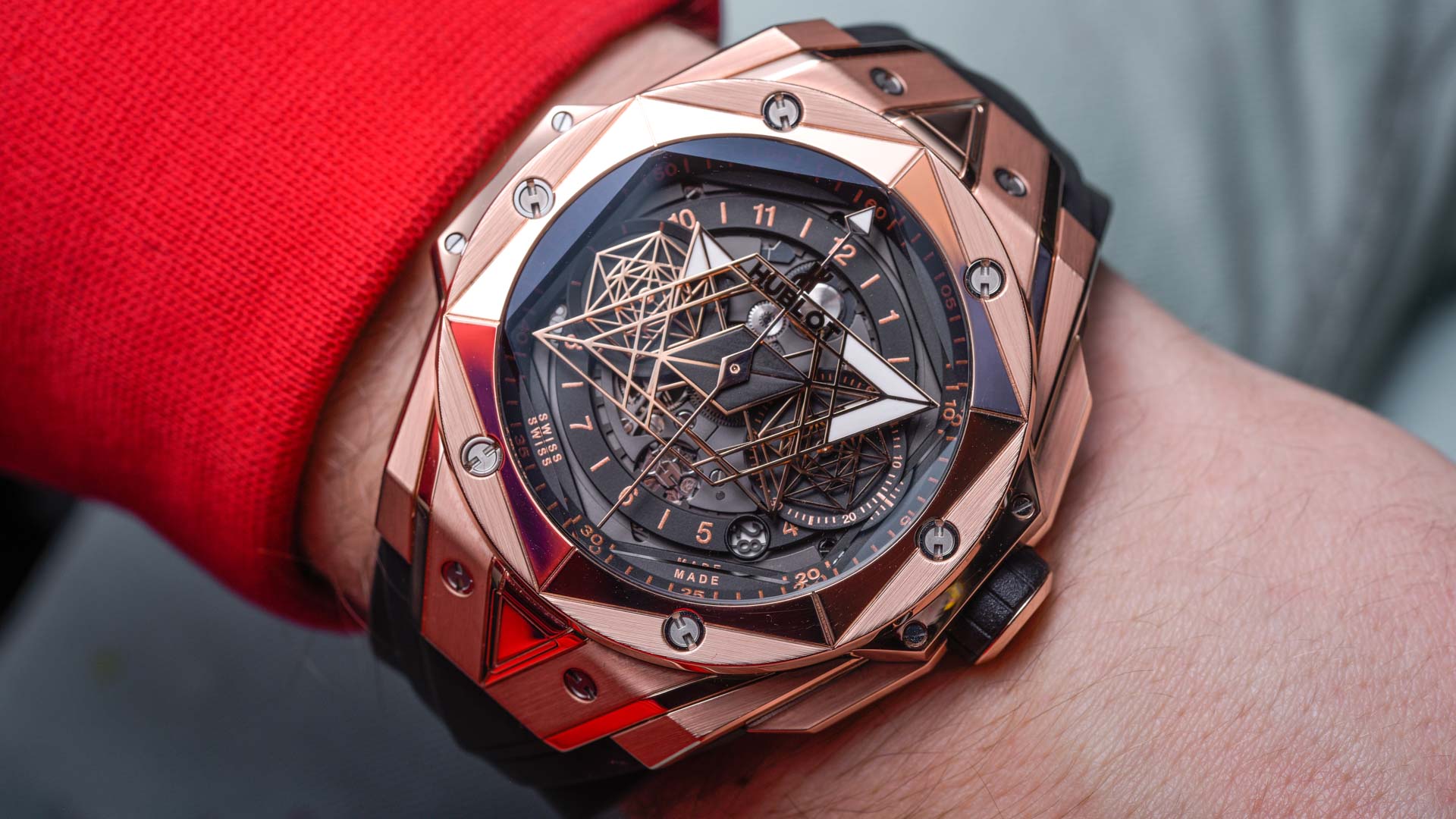 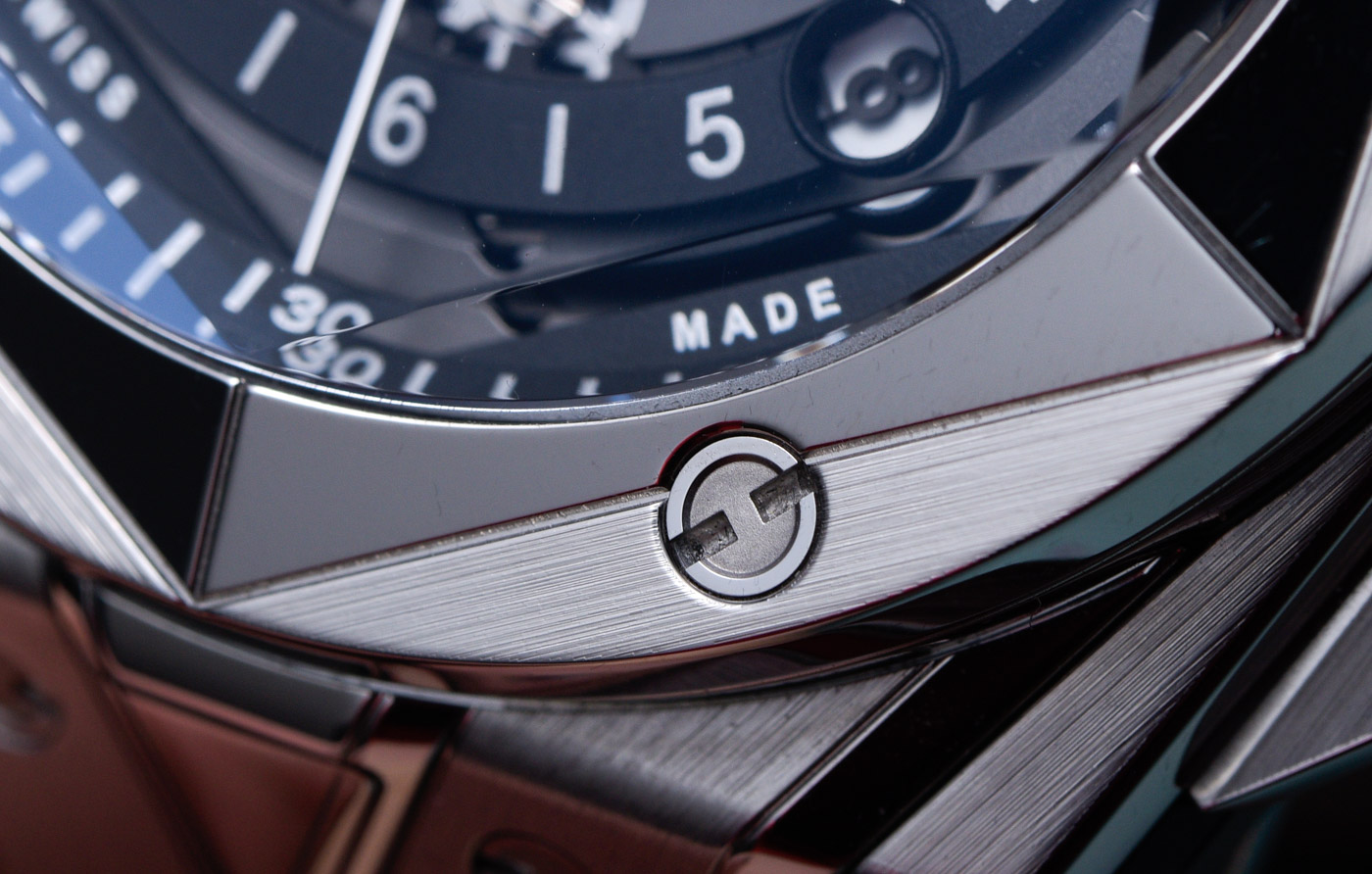 The sapphire crystal plays ball: Its hexagonal facets near its edges lead into the “corners” of the bezel and, more importantly, add another element of visual complexity. Legibility is hardly affected by these facets, although they do introduce some distortion near the edge. When a “box crystal” is the be-all and end-all of creativity for some brands or the fact that they replace scratch-resistant sapphire crystal for a scratch magnet plexi, seeing this unusual crystal thrown into the mix is a treat. 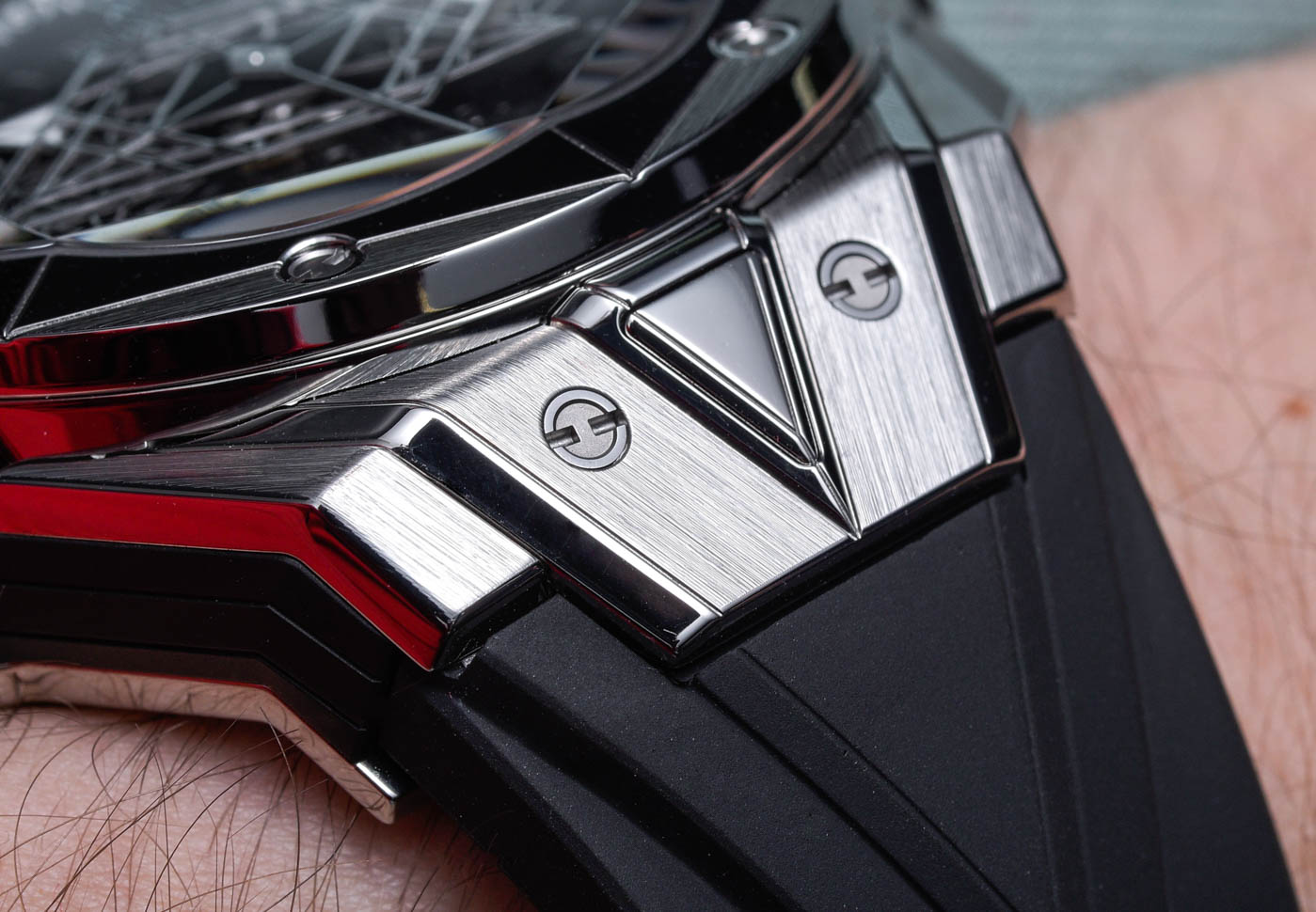 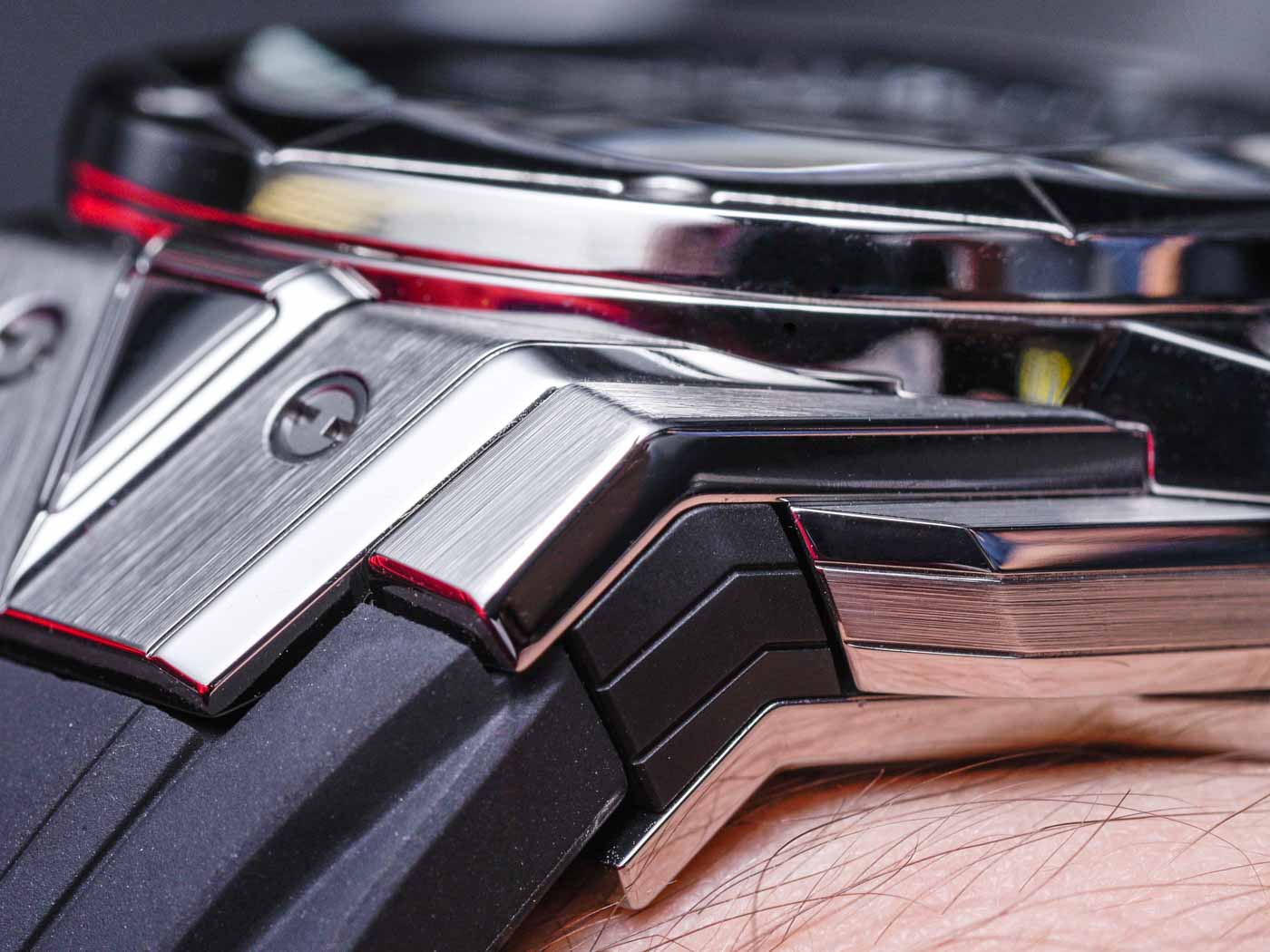 The case is mental. Countless angles, facets, and lines make a single lug of the Hublot Big Bang Sang Bleu II Chronograph more complicated than the entire case of an average dress watch. Then again, a dress watch doesn’t want to be Sang Bleu or vice versa. One could reasonably argue that the case is a textbook example of art for art’s sake — until you see that the Hublot One Click quick-strap change system’s button has been so neatly integrated into it in the form of a triangular, high-polished button. Still, even with this bit of neat functionality in place, the overall design is as complex as it is willingly over-the-top. Whether that’s someone’s cake or not depends on taste. 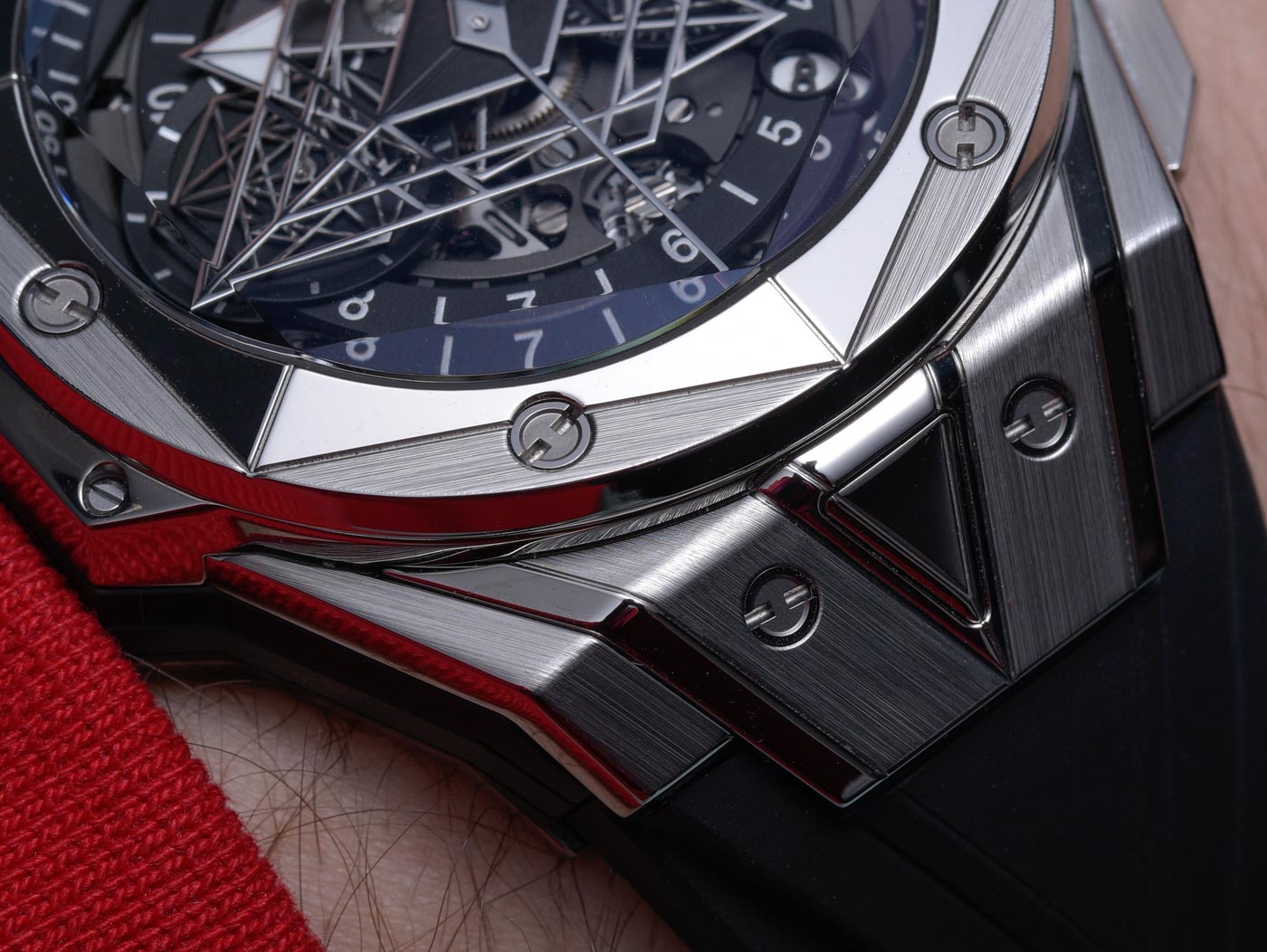 I do, nevertheless, applaud Hublot for putting this case together. In a way, it is like a concept product (a concept car or piece of technology), something produced to test one’s manufacturing abilities — and to ultimately show them off as well. As much as an eyesore all these lines might appear, I can’t help but look at this case from a watch-lover’s perspective and be in awe of the complexity of its shapes, surfaces, and construction. 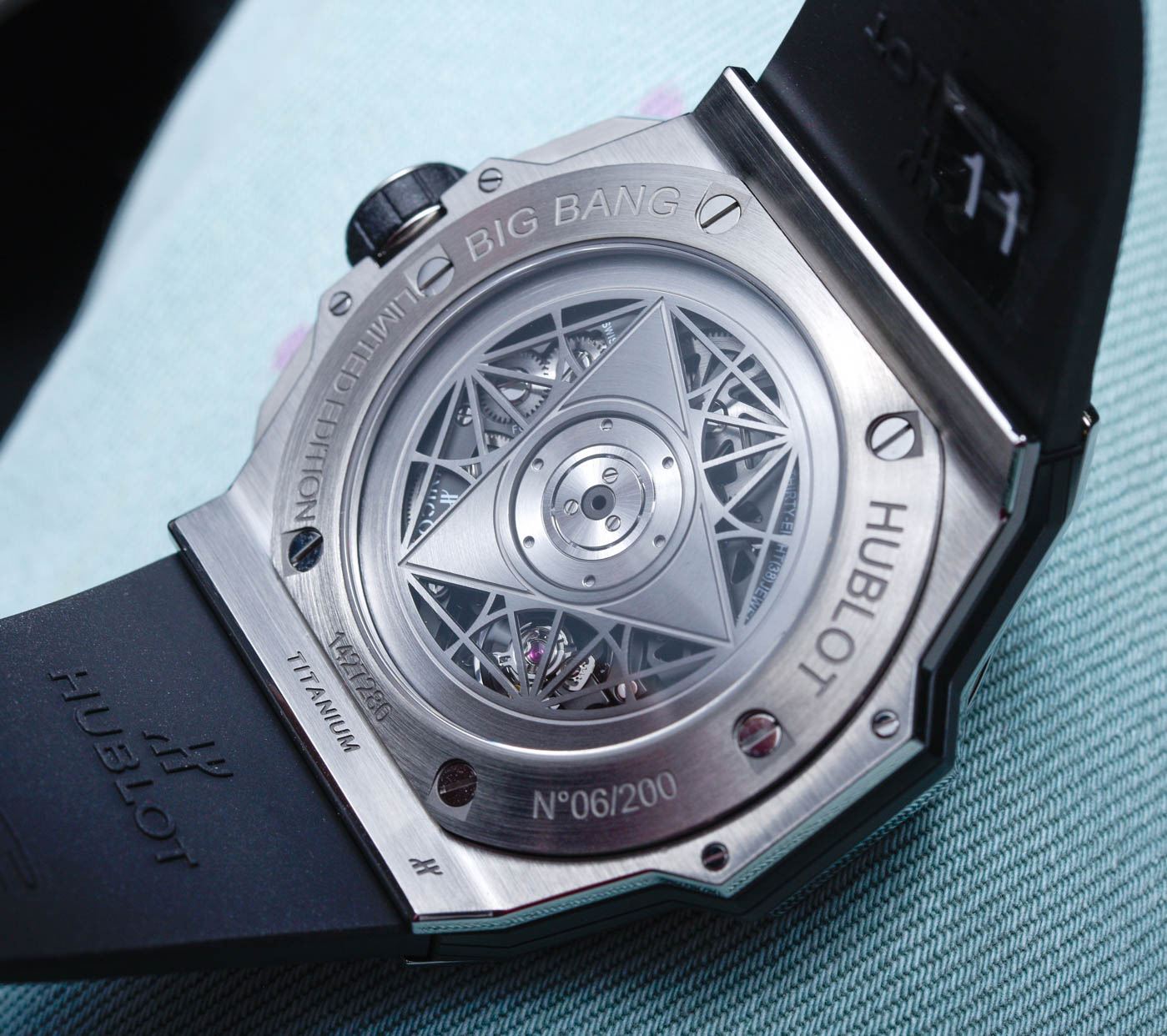 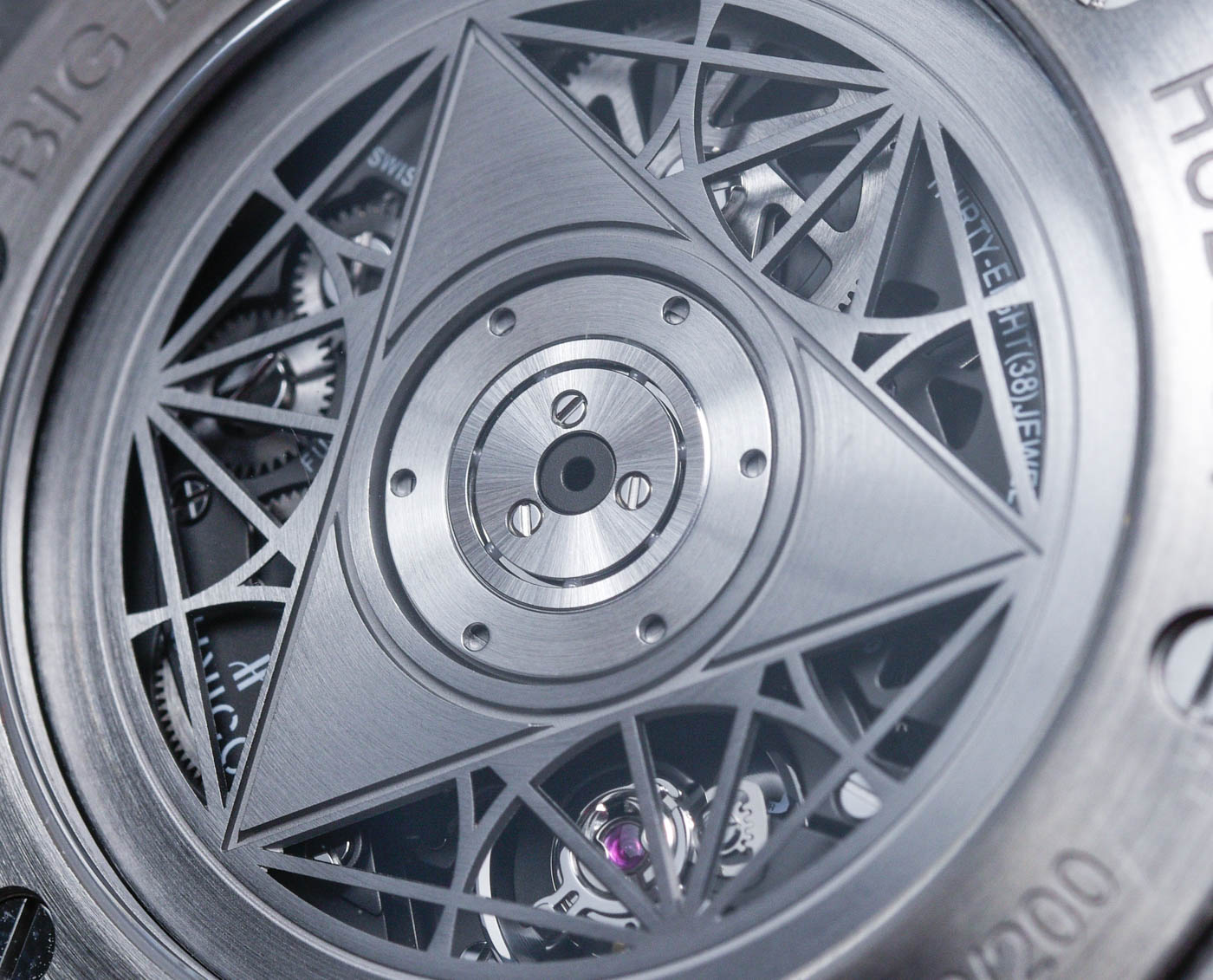 Powering the Hublot Big Bang Sang Bleu II Chronograph is the HUB1240.MXM Unico movement, an automatic chronograph with a flyback function — not that you can see much of the single line that is the chronograph seconds hand — operated through a column wheel. Power reserve is 72 hours, as it should be for a modern and expensive in-house caliber. The self-winding rotor had to be modified as well; it has an all-seeing eye aesthetic to it. Let’s hope it won’t accidentally throw us into a parallel universe, and that it will do a good job at winding its mainspring. 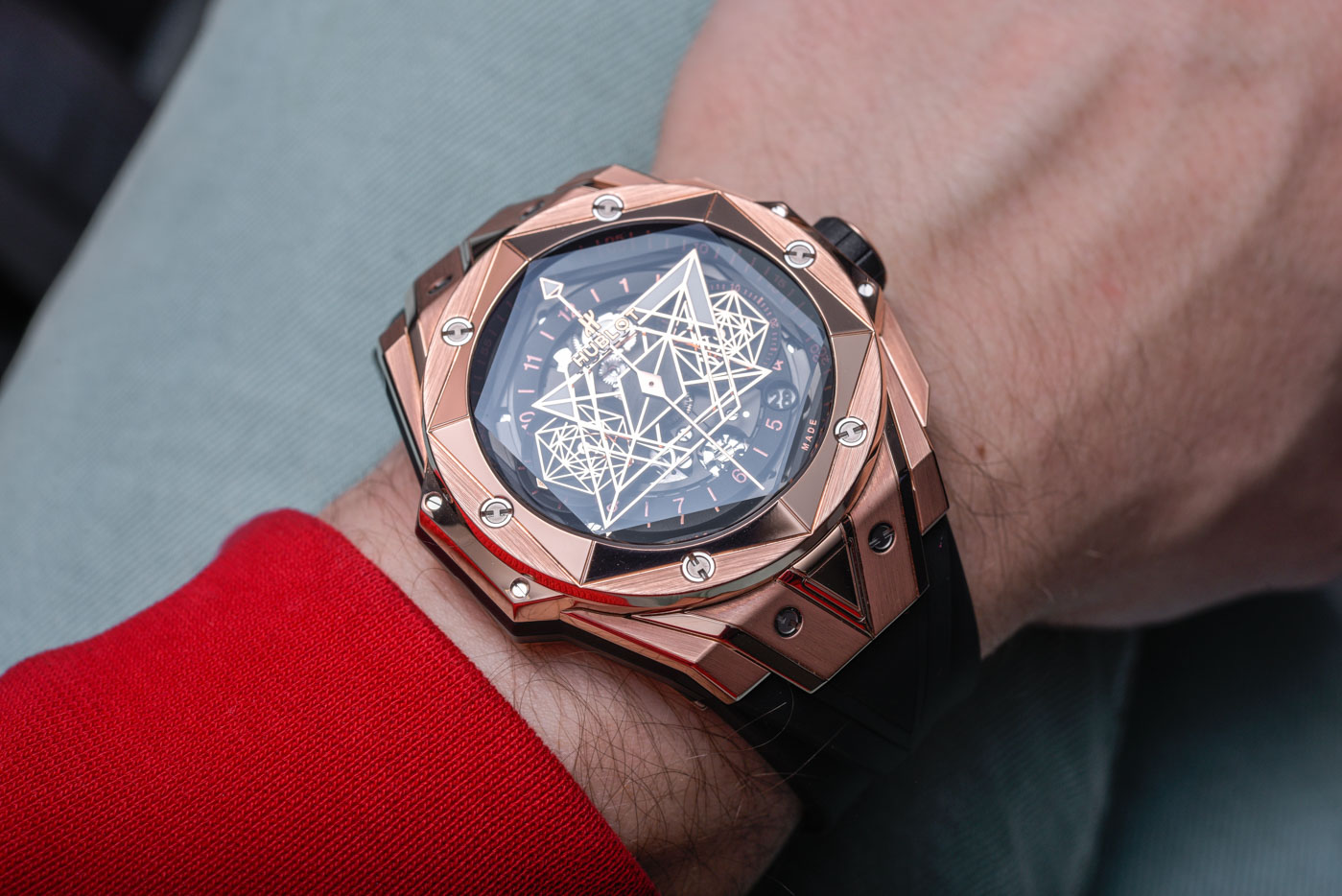 On the wrist, the 45mm-diameter Big Bang Sang Bleu II case looks a lot larger — rather, I should say, a lot more bold – than that figure would suggest. And yet, strangely, with its steeply angled lugs, it is as though it was specifically designed for those with a narrow wrist (like mine). Yes, it looks absolutely preposterous both in its titanium and in its King Gold versions, but not because it stretched two inches beyond either side of my wrist. 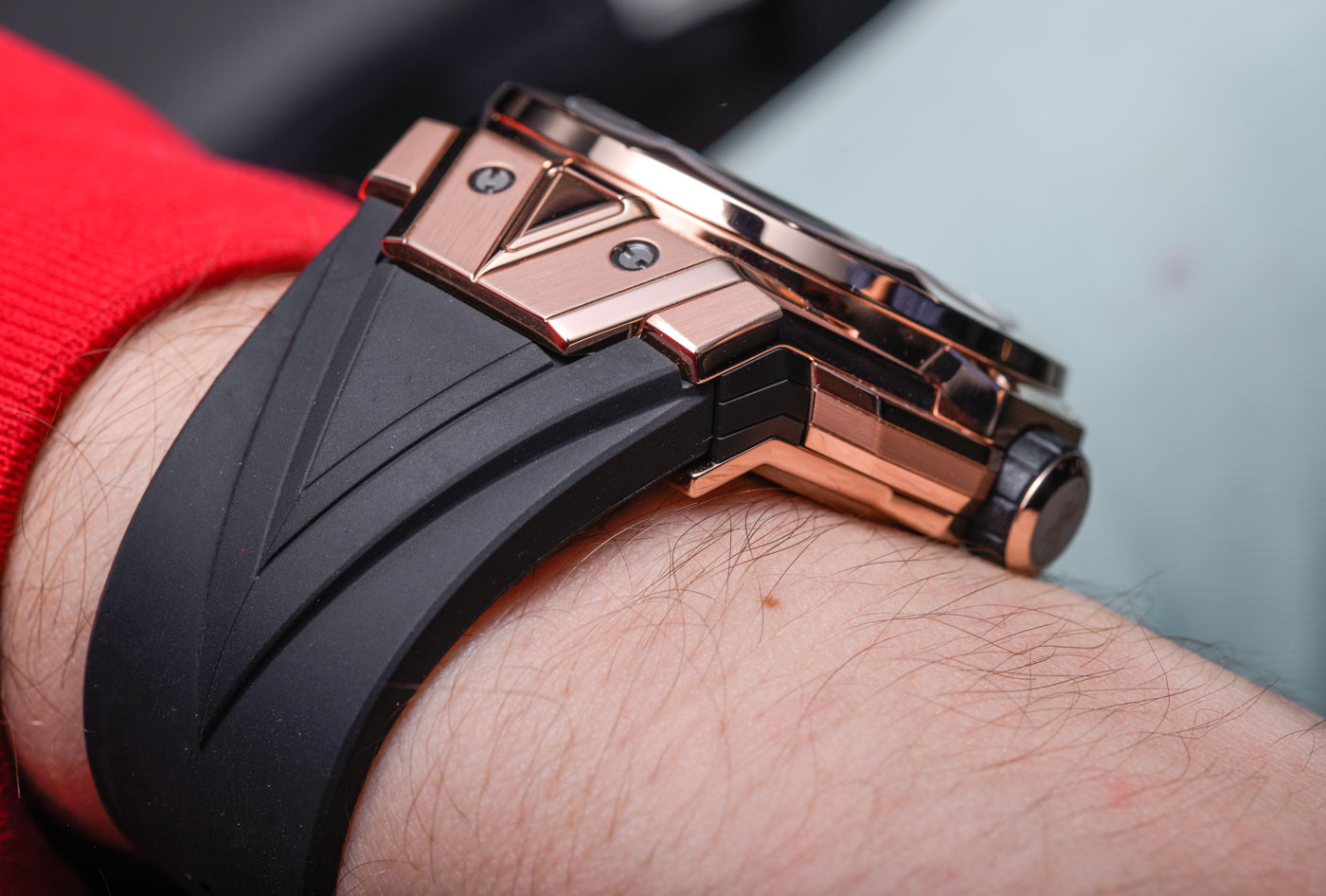 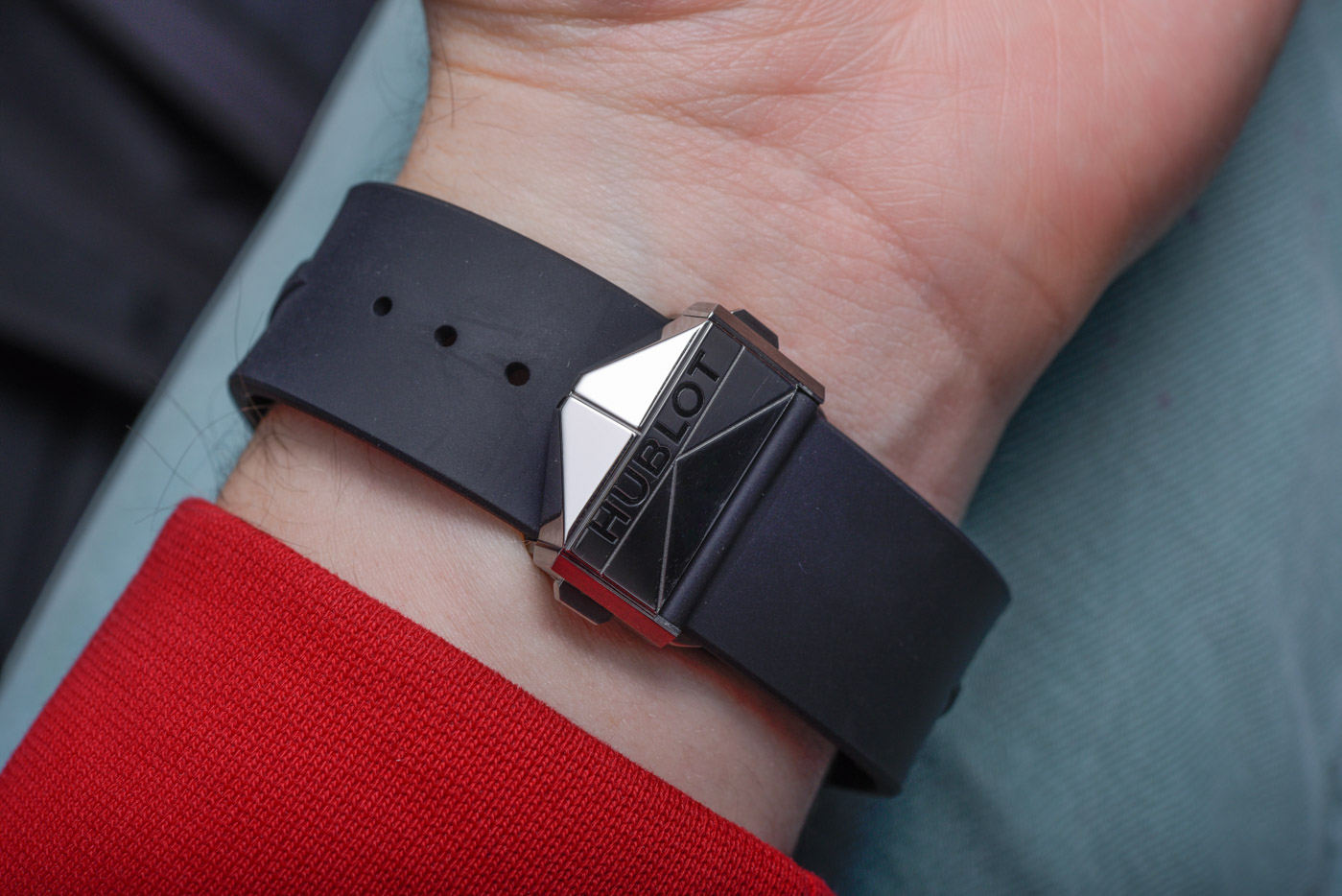 The strap, although it certainly looks cool as it is integrated into the lug structure and all its design elements, is a bit of a letdown, at least on the first try. It feels a bit too wide underneath the wrist and it’s just a lot of flat, uninteresting rubber that doesn’t look or feel as expensive as I think it should. The buckle certainly helps a bit with the overall impression and ties the strap in with the case and dial — but that doesn’t change the fact that I’d love to see these straps show some improvements. The surface also collects lint like nobody’s business. Touch it against your shirt or any fabric for that matter, and it won’t be clear until you rinse it (and even that doesn’t always help). Hublot is widely credited for standing out as being the first luxury brand to pair a rubber strap with a gold watch — and although that sounds natural and is commonplace even on Rolex levels by now, it certainly wasn’t some two decades ago. 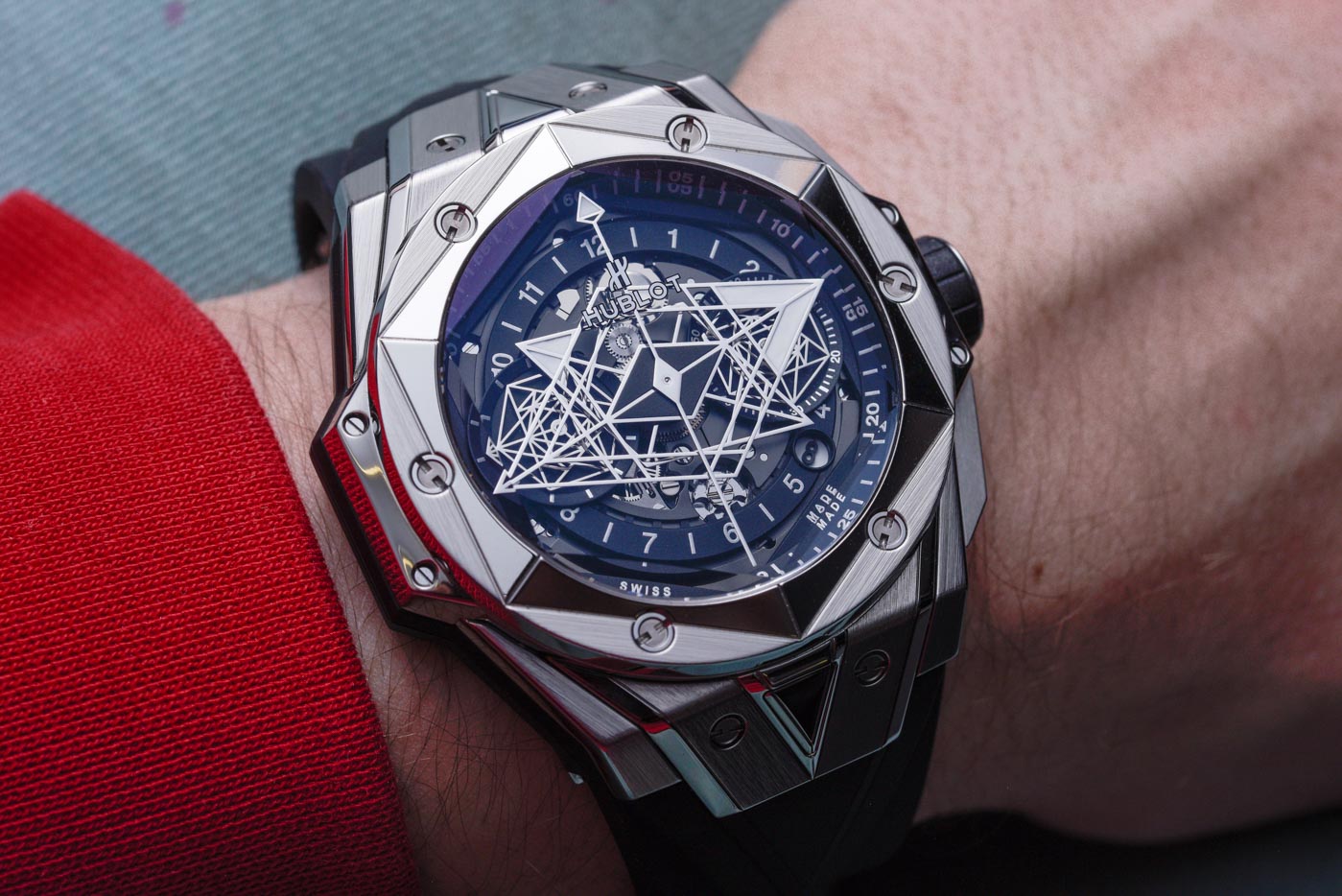