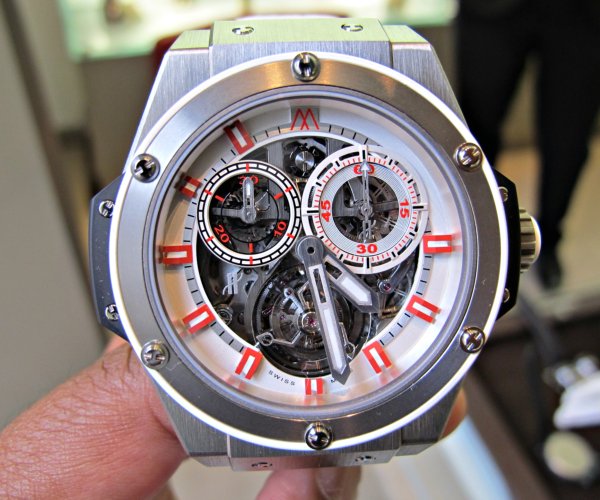 So… the Hublot King Power Cathedral Gong Tourbillon Minute Repeater. In White. Yes, the name is a mouthful, and you may have seen the carbon fibre edition released by Hublot previously (hands-on here), but this colour, complete with the Marcus (a watch boutique in London on Bond Street) ‘M’ logo at 12 o’clock, is a piece unique (one of a kind). The manual wind calibre HUB8100 movement, developed by Hublot (and their now subsidiary movement division from BNB Concept) contains a column wheel monopusher chronograph, tourbillon and minute repeater functions. Apparently it is the most complex movement made by the manufacturer to date.

Aesthetically, the white is very pleasing in the flesh, very bright with red accents highlighting certain parts of the semi-openworked dial. The dial layout itself is probably a bit more legible than the previous ‘regular’ edition of the same watch due to the colour. It is a very summertime watch, and at this time of year would look great with a nice polo shirt, with a linen get-up while relaxing on the deck of your yacht in St Tropez, or hanging out the side of your Bugatti Veyron as you prowl around Monaco. Of course the watch is made to be loud and proud, and that is what the brand is about, so better to embrace it! A casually styled high horology watch is not something that has been the norm up until recently, and minute repeaters in large sports watch cases are even rarer. 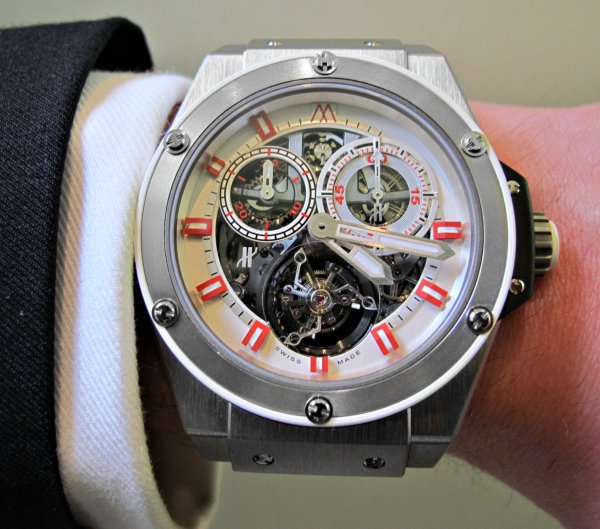 Speaking of the minute repeater, the mechanism in the King Power Cathedral Gong Tourbillon (name has a little ring to it – no pun intended) uses two gongs located on the rear of the watch above the carbon fibre bridges. These sound out two different notes which enable the time to be sounded out in order of hours, quarter-hours, and minutes. The sound generated is still quite warm and loud, and can be heard very well in the video review attached to this artice. It’s not the world’s first titanium cased minute repeater (The Jaeger LeCoultre Master Minute Repeater might be), and I am impressed by the sound it generated. Also impressive is the mechanism used to fire up the repeater. The black kevlar ‘ear’ located on the left hand side of the watch case slides upwards from 9 o’clock to 11 o’clock and activates the minute repeater. Very stealth, and more importantly it keeps the case shape free from further clutter. 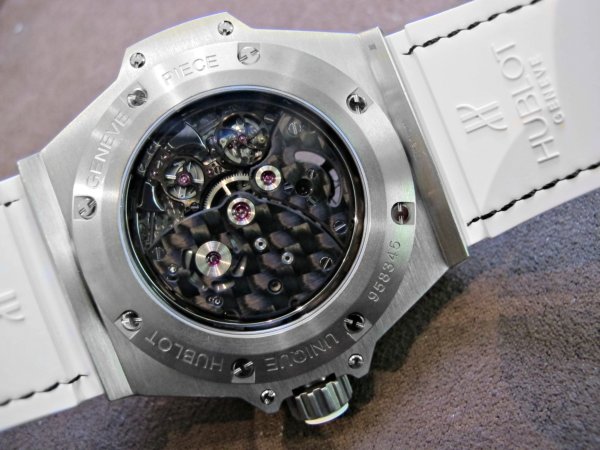 Chronograph wise, the monopusher is located inside the watch crown. That is to say that a single push of the white rubber H logo button sticking out of the crown will activate the chronograph, while a second push will stop it, and a third final push will reset it. Strangely enough there is no consistent running seconds hand (but you can use the chronograph for that). Maybe this was done to keep the dial uncluttered? Some may like this omission, some may not. Personally speaking I don’t really mind it either way. One thing I would have liked to have seen is the usual ‘H’ screws on the bezel replaced in favour of some custom ‘M’ (for Marcus) shaped ones. I think it would have added a touch more uniqueness to the piece without over emphasising it. However, that would have been an extremely expensive upgrade given the machining and logistics of making tools.

At 48mm, it still sits well on the wrist due to the lightweight titanium case. Some individuals that I know prefer very heavy cases in order to really feel the presence of a watch while wearing it. However, speaking as someone with relatively small wrists I can say that it feels substantial enough but still very comfortable. 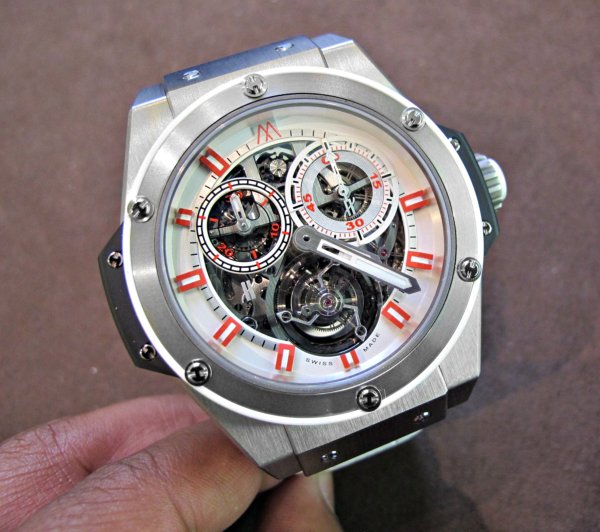 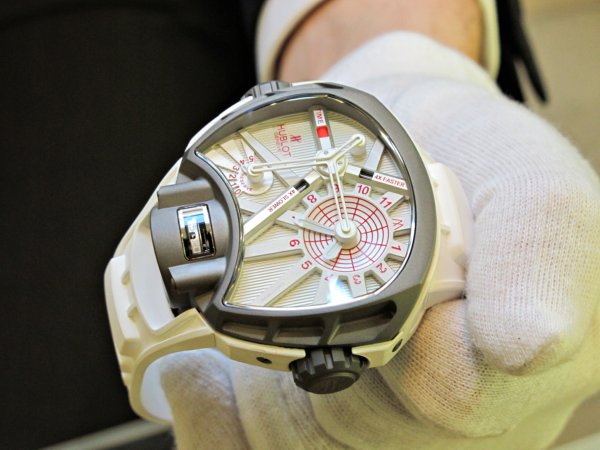 Hublot as a brand has evolved from a small Swiss brand that was barely known, into a hugely popular manufacturer that counts the likes of Diego Maradona and Usain Bolt as its ambassadors. It is impossible to claim that this was not thanks to the efforts of Jean-Claude Biver and his team. So design, function, and even product aside, why has one of the biggest luxury brands of the moment commissioned a pair of unique watches especially for Marcus?

See, the story of Marcus Margulies and his contribution to the horology world stretches pretty far back. As a veteran of the luxury watch industry, his distribution company Time Products, along with the self-named Marcus boutique, was one of the first to back Hublot at a time when it had just been headed by Jean-Claude Biver, the charismatic former CEO of the brand, and the man largely credited with bringing Hublot’s yearly revenue up from 20m Swiss Francs in 2004 to approximately 300m Swiss Francs last year. The faith put into the brand by Marcus, who acted as not only its first new retailer but also the UK distributor, is recognised to have been a significant force behind the brand’s success. The store and its proprietor are very well known in watch circles, so the introduction of the then lesser known Hublot brand into the horological equivalent of Willy Wonka’s Chocolate Factory immediately sparked interest from other retailers and collectors alike. The rest is history, and these two unique pieces have been created by Hublot to celebrate both Marcus’ 70th birthday, and also the 10th anniversary of the Marcus boutique. 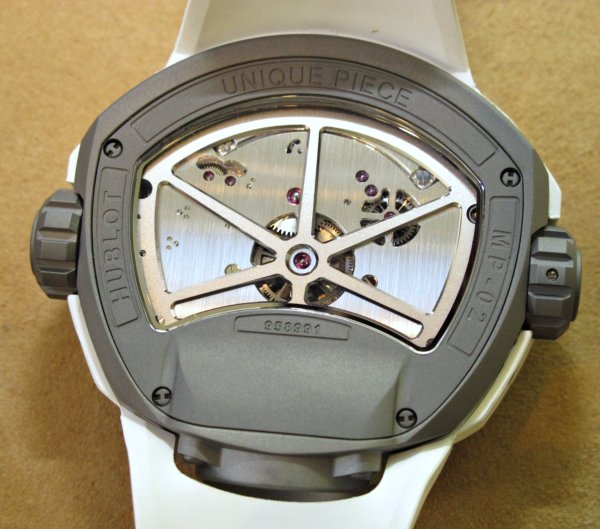 In addition to the Tourbillon Minute Repeater, there is a second, perhaps more exotic piece unique Hublot. The second Marcus flavoured Hublot offering comes in the shape of the MP-02 Key of Time, or La Clé du Temps (which is basically French for… “the key of time”). You may remember the previous black and green version released that was part of a limited edition of 50 pieces we discussed hands-on here. Well this is the same piece but again executed in the white and red Marcus colour scheme. All the features from the original are present including the vertical tourbillon, 5 day power reserve, and the stand-out unique feature of being able to speed up or slow down the display time by a factor of 4… and then being able to return to the actual time at the flick of a crown. Useless, but nonetheless fun. 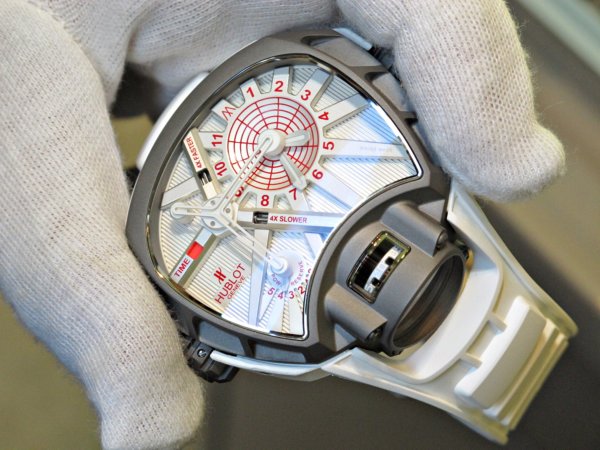 To be fair, this white and red version looks a lot better to me than the black and green iteration. It may have to do with the immense amounts of dust I saw on every picture of the black version, or it may simply be that it looks less ‘plastic.’ Whatever the reason, I found myself liking this piece more than I thought I would. It is of course hefty and sits high on the wrist, though we’d do well to remember that neither of these are formal dress watches despite the spec list of features (tourbillons, minute repeaters and so on). Don’t try and tuck these watches under your shirt cuff, it’s just not gonna happen! They are made to be worn in full view of everyone within a mile and a half radius, and being honest, who wouldn’t want to show off the fact that they are wearing the cost equivalent of a moderately stocked super car garage on their wrist?! The pair of these watches will run you in the ballpark of £750,000 (though they are sold separately).

These two piece unique Hublot timepieces and other interesting unique watches are available at Marcus, which is located at 170 New Bond Street in London. It is part of their 10th Anniversary Exhibition that will run until October 2nd, 2012.