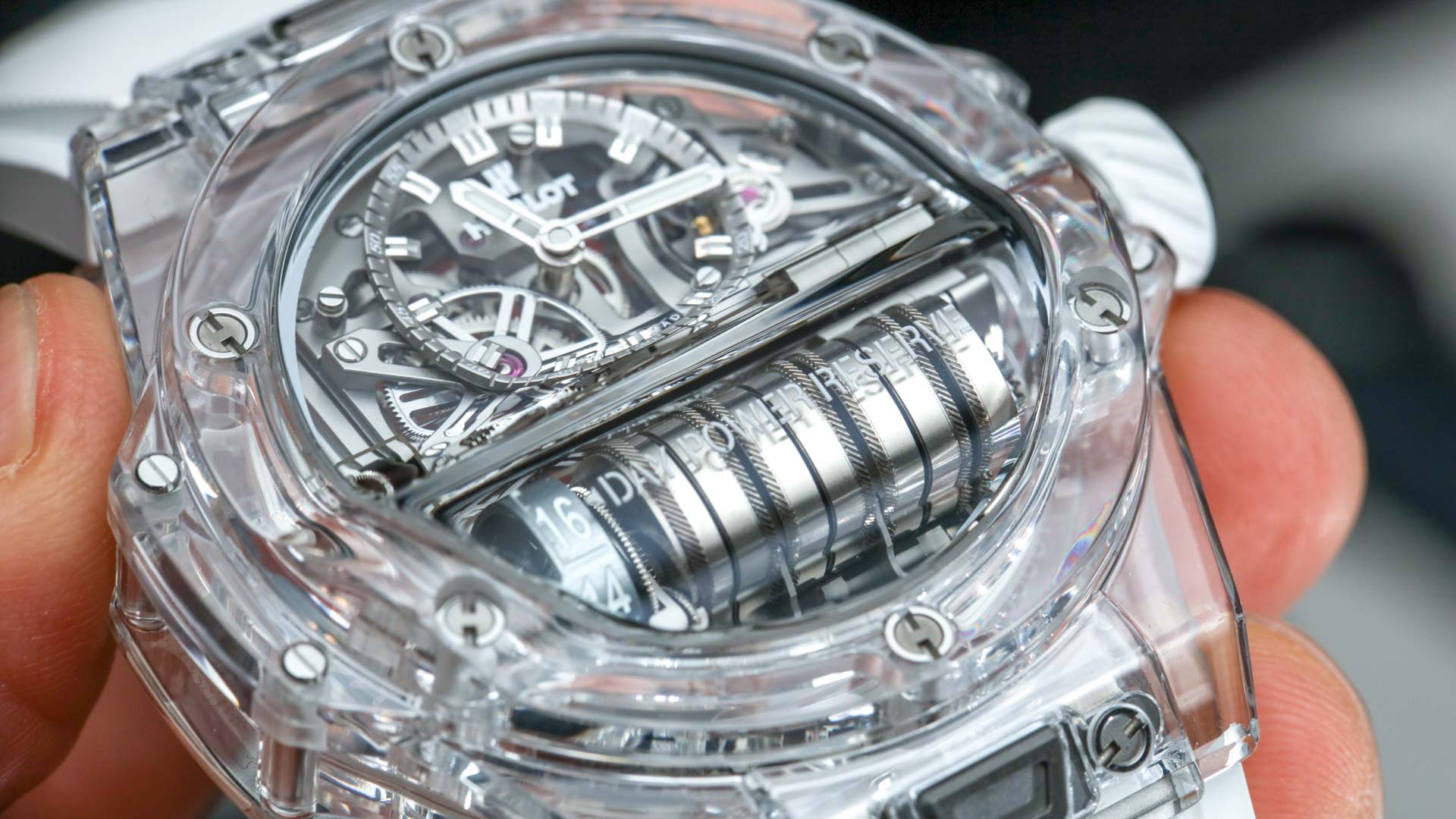 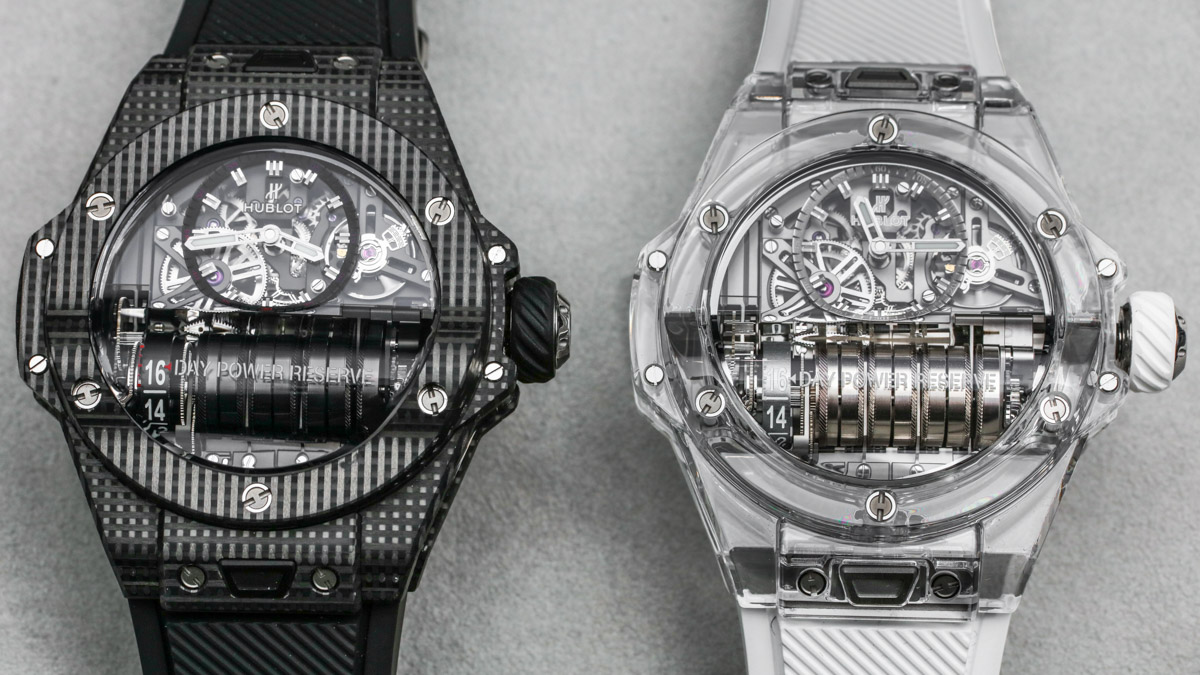 Hublot‘s most technically interesting new watches for 2018, in my opinion, are the new Hublot MP-11 Power Reserve 14 Days timepieces that come in two versions (sapphire crystal or 3D carbon). With that said, the most complicated watch released by the Swiss brand is actually a new version of the MP-09 (Masterpiece collection #9), but the MP-11 has a new look and movement which exists as part of Hublot’s ongoing modification of the long power reserve movement technology originally designed for the Hublot MP-05 La Ferrari, which had a total of 50 days of power reserve. 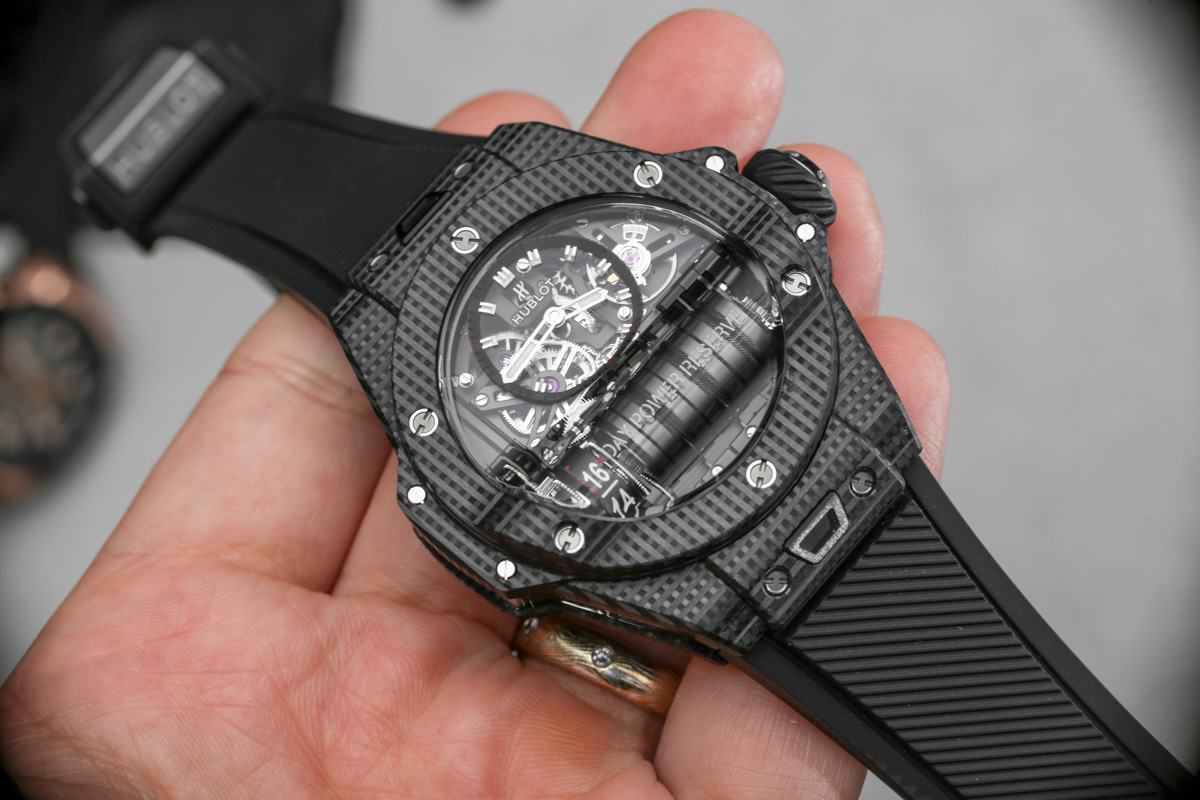 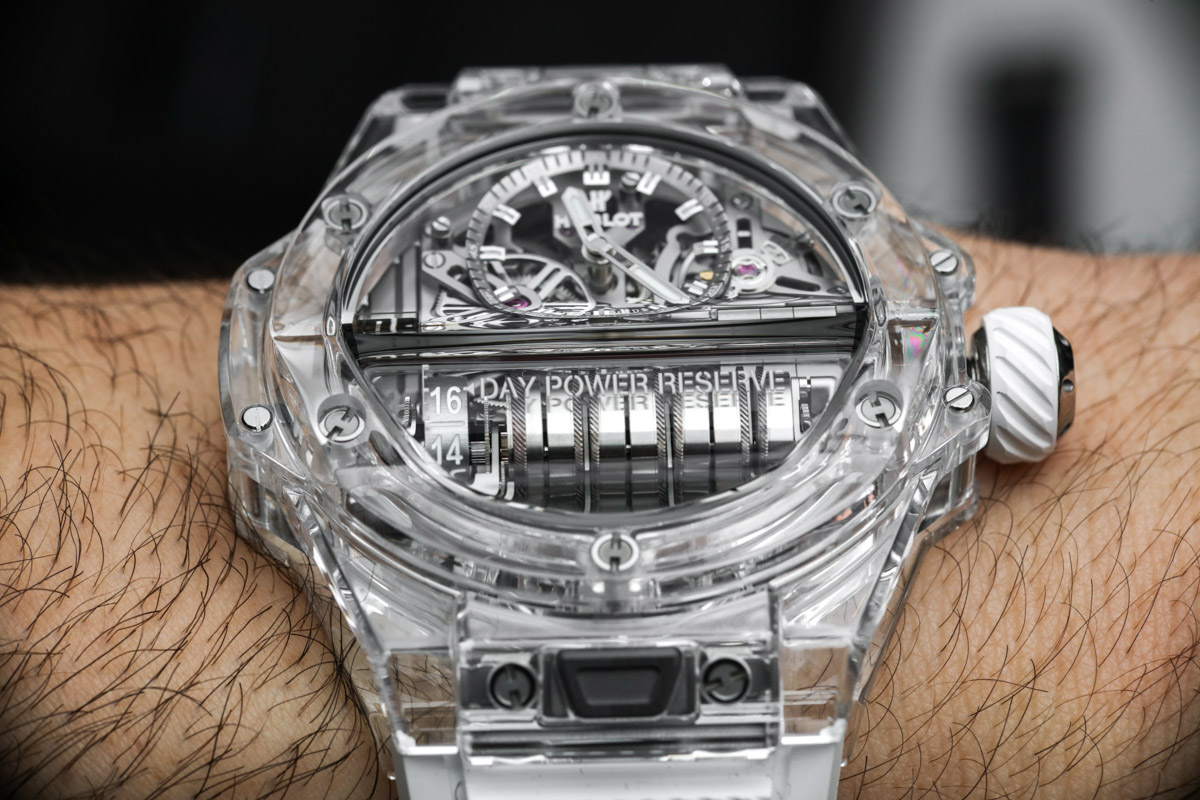 The technology I am talking about is a system of stacking mainspring barrels to allow for power reserve duration highly uncommon in most mechanical watches. The La Ferrari wasn’t the first mechanical watch developed with a longer than average power reserve time, but no company aside from Hublot has put as much effort into this technology over the last few years. The MP-11 has less power reserve than the La Ferrari for sure but strikes a healthy mix between wearability and technicality in my opinion. After the MP-05 La Ferrari watch, Hublot released the MP-07 with 42 days of power reserve. Cool but not “pretty” in the traditional sense, the MP-07 was a transitional product in their attempt to play around with watch design and long power reserve mechanical movements. 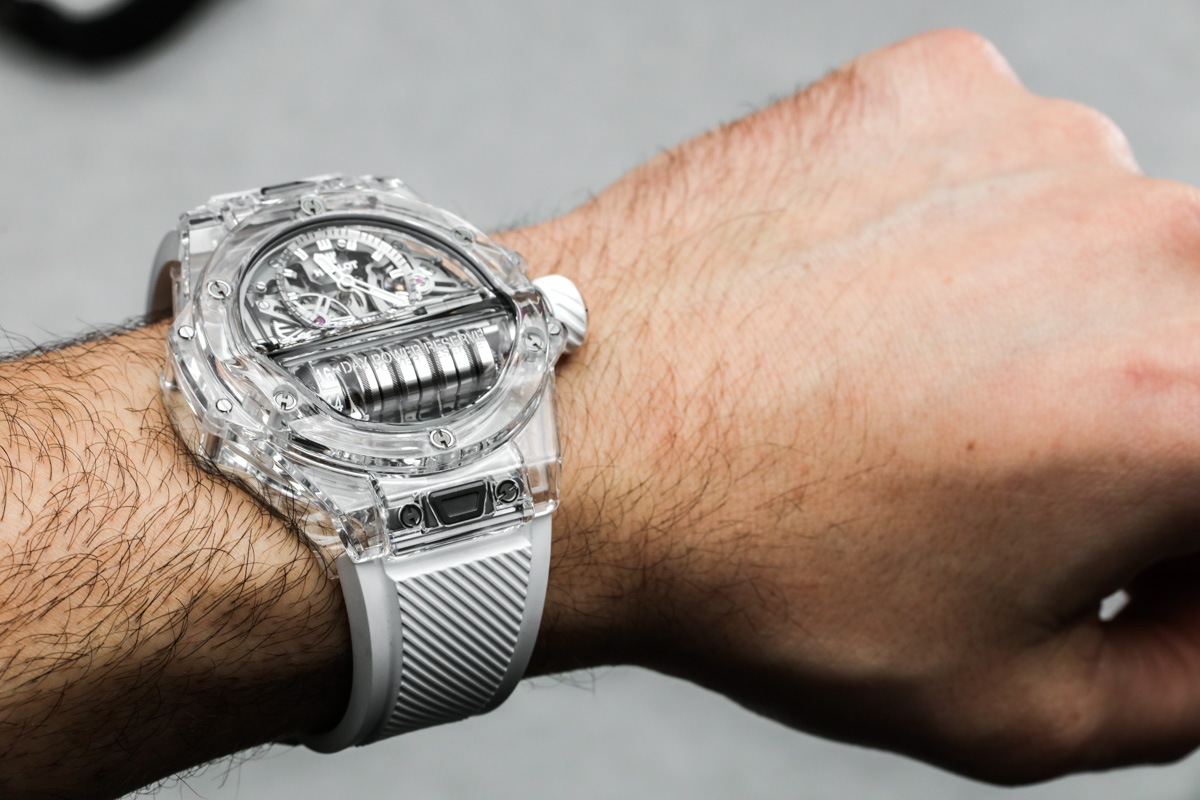 The MP-11 is a solid offering because it more or less uses the iconic Hublot Big Bang style case with a movement that has a power reserve of 14 days. This makes the model a bit less “niche” in terms of its aesthetic appeal and in my opinion nicely ties in Hublot’s strengths as a movement designer as well as the distinctive look of the familiar Big Bang case aesthetic. For 2018 the MP-11 Power Reserve 14 days comes as the reference 911.QD.0123.RX in carbon as well as the reference 911.JX.0102.RW in sapphire crystal. The cases are 45mm wide, water-resistant to 30m, and somewhat thicker than your standard Big Bang case, given the “bump” necessary to house the row of mainspring barrels which are visible from the front of the watch. 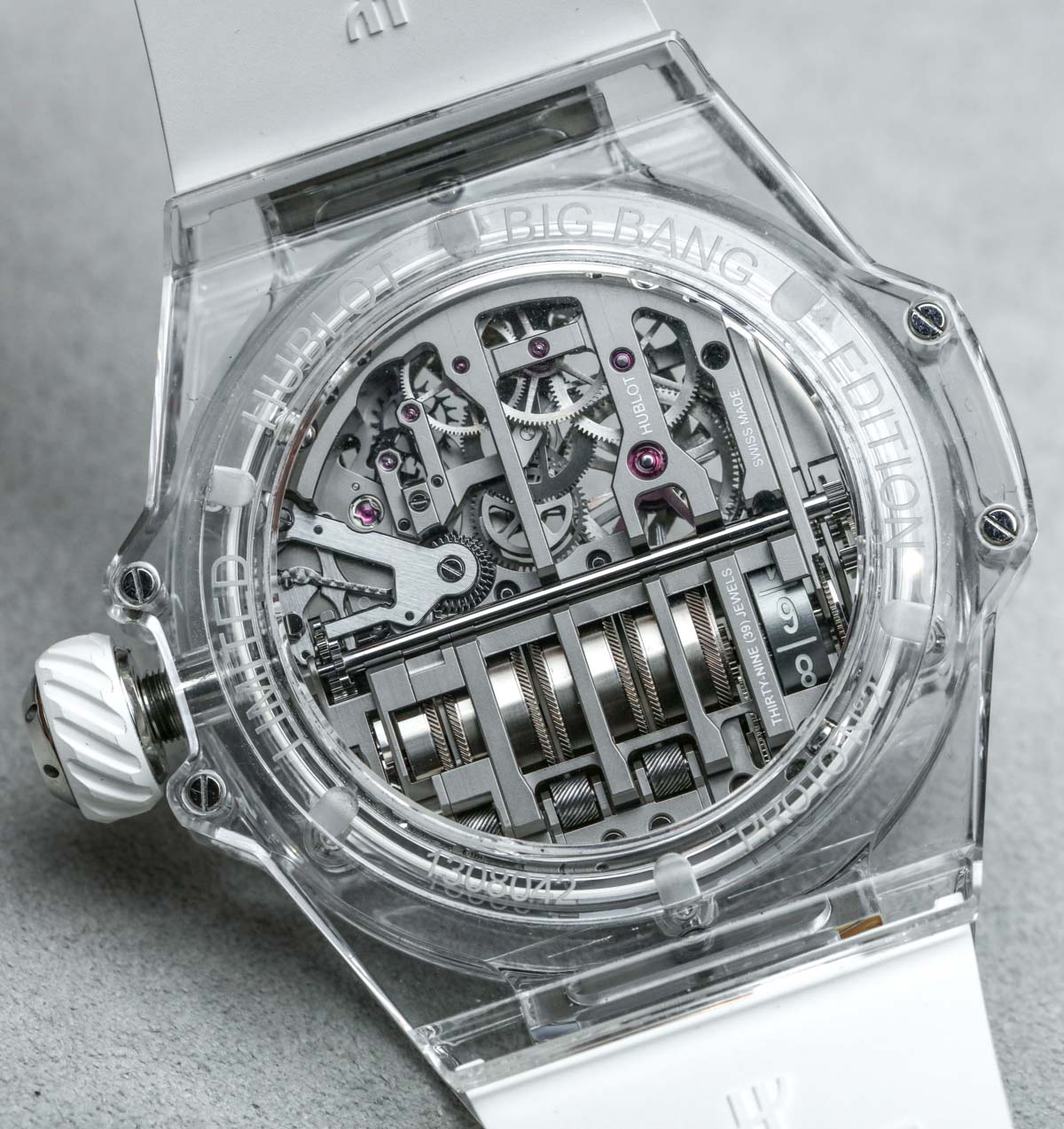 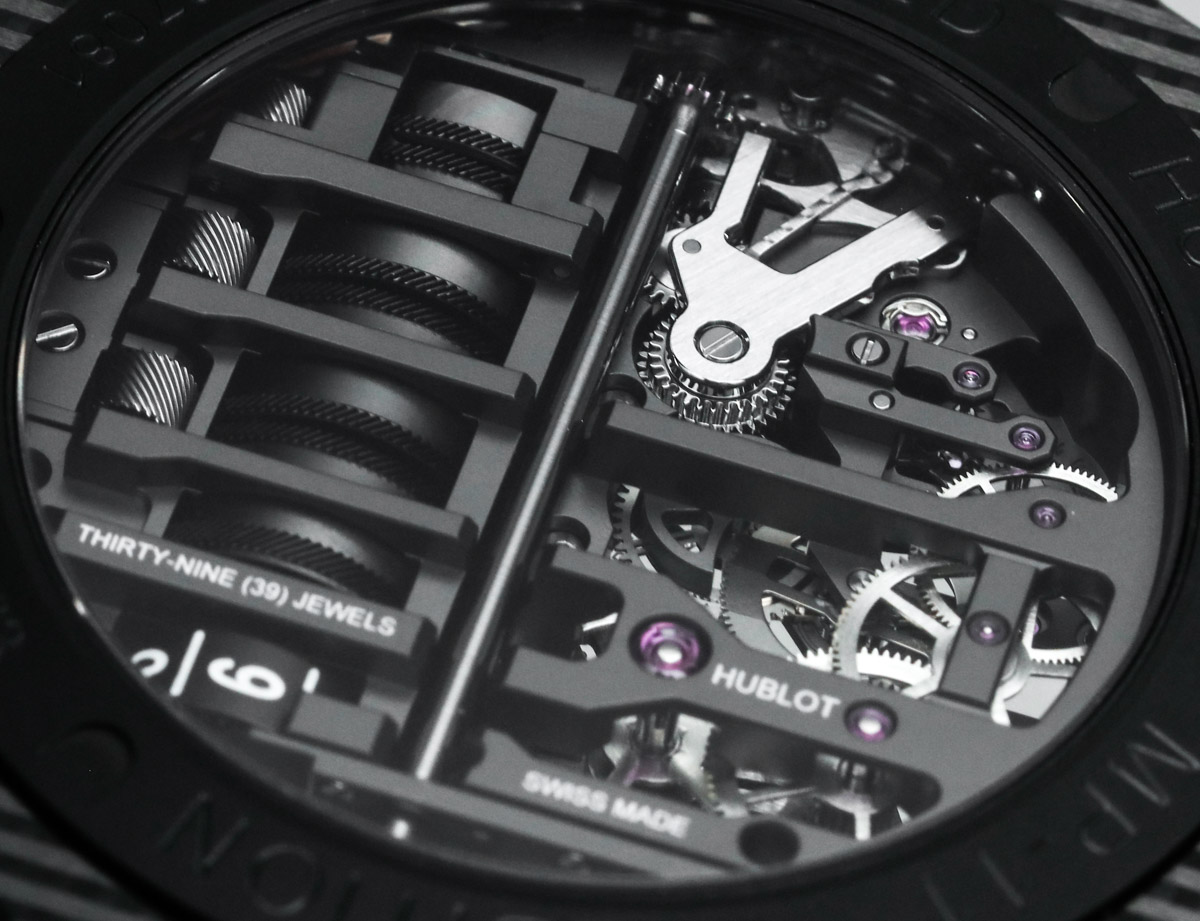 Developed and produced in-house, the movement inside of the Hublot MP-11 is the caliber HUB9011 manually wound mechanism with two weeks of power reserve. That is roughly 336 hours of power reserve which comes from a total of seven coupled mainspring barrels, which you can count as they are horizontally stacked and visible through the dial. To the immediate left of the mainspring barrels is an additional drum that functions as the power reserve indicator. I really admire how if you read the current number (days left) on the power reserve scale with the text next to it, it creates a statement which can be read in your mind (for example, “12 Days Power Reserve”). Above the mainspring barrels is an off-centered, albeit legible display for the time with hours and minutes. 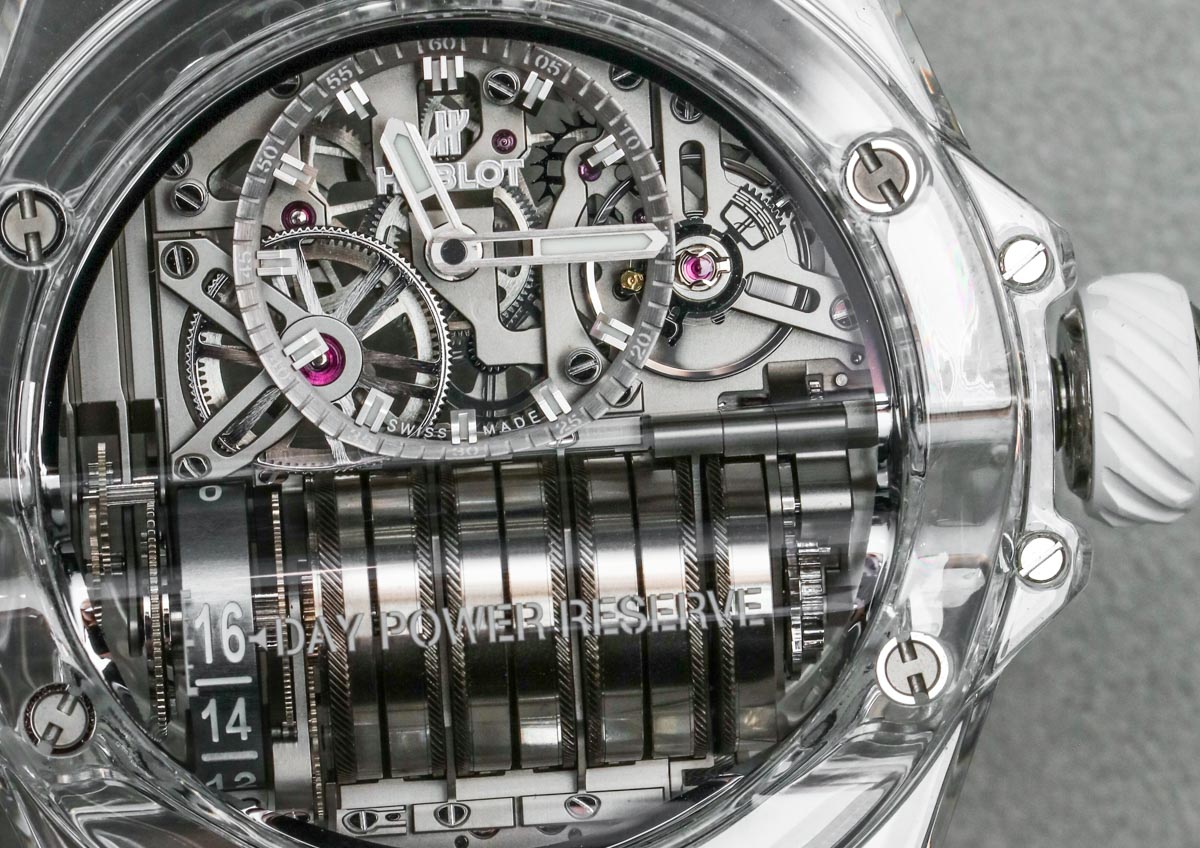 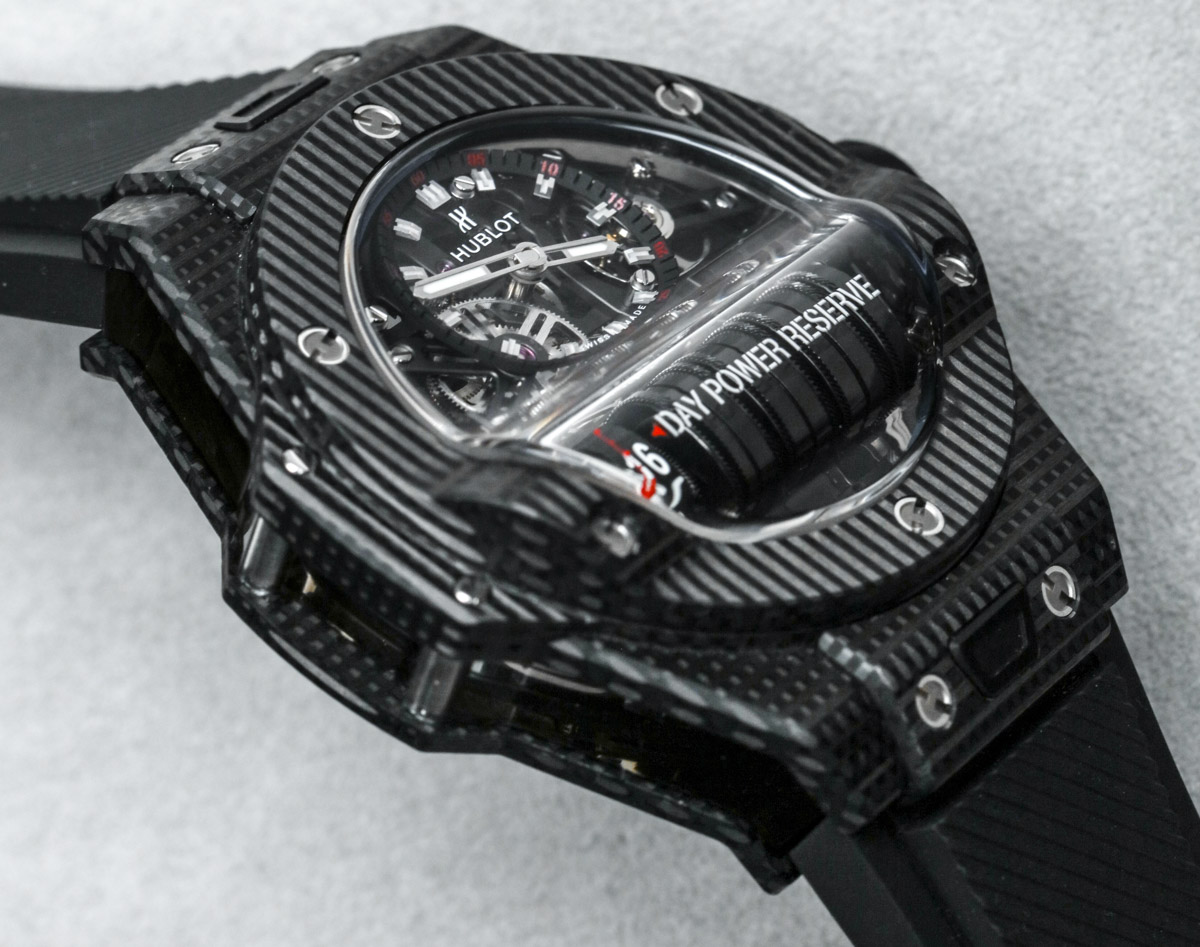 Previous versions of Hublot’s exotic long-power reserve watches included other fancy complications such as a tourbillon. That has been removed for these “simplified” versions of the otherwise complex and exotic mechanisms. The MP-11 is more or less as wearable as most Big Bang 45mm cases and the movement should ideally offer more daily practicality for those who like the idea of wearing a timepiece such as this often. If you recall, the original MP-05 La Ferrari watch even needed an external tool to wind the movement. The MP-11 is wound normally through the crown and is a great attempt at offering a familiar wearing and operating experience with the novelty of an uncommon and interesting movement concept. 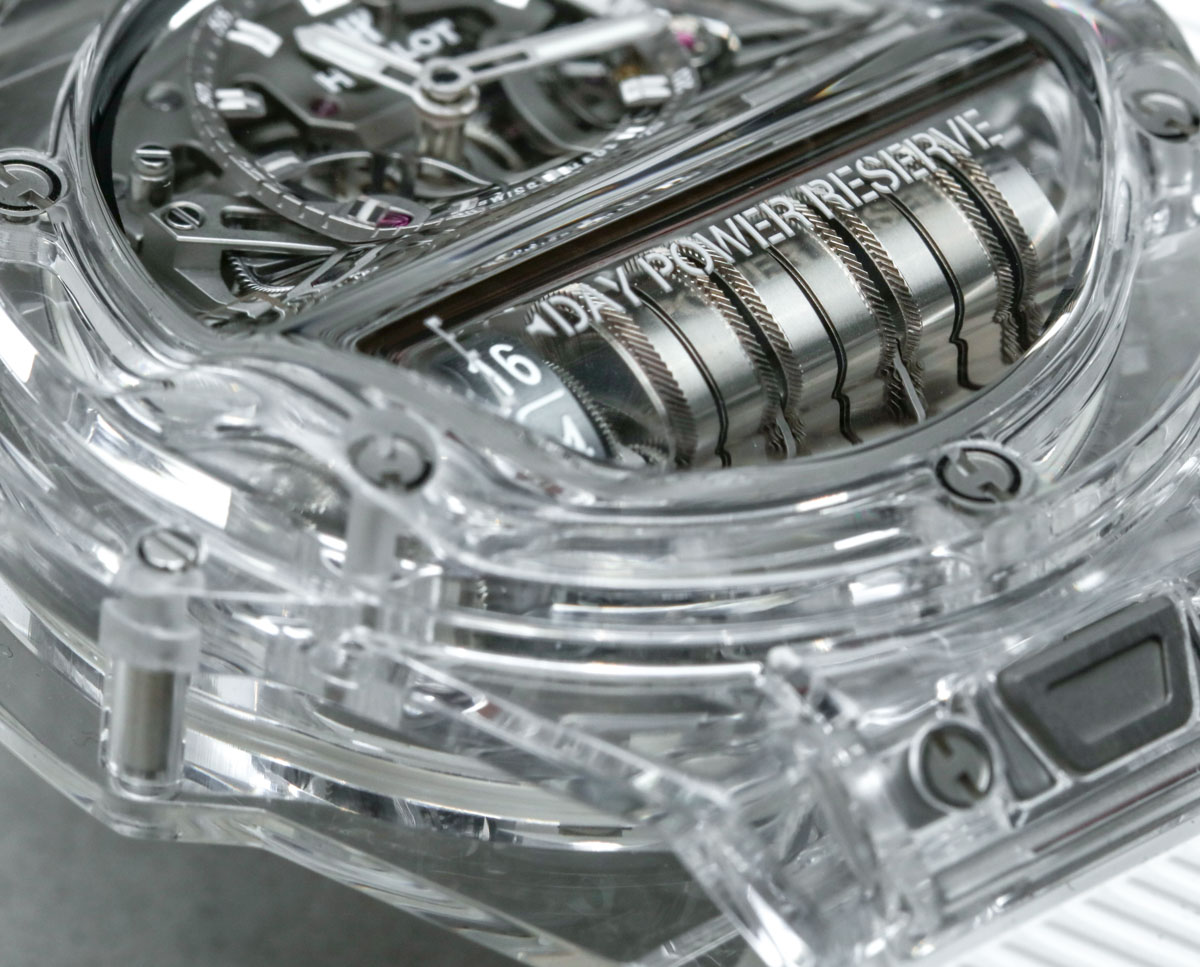 In sapphire crystal, this watch has a lovely presence offering everything you might expect in a transparent timepiece. The ability to appreciate the movement from all angles as well as knowing the material is extremely scratch-resistant is a major bonus when wearing an otherwise “movement-focused” luxury watch such as this. Also available for 2018 as a limited edition version is the Hublot MP-11 Power Reserve 14 Days 3D Carbon. At first glance this looks like Hublot’s traditional carbon fiber cases. It isn’t. Hublot claims this is a form of carbon fiber (versus just carbon) and it has a neat look to it. Hublot also used this novel “3D Carbon” material for the case on their 2018 limited edition version of the Hublot MP-09. 3D Carbon is smooth to the touch but has an interesting pattern to it which is deep like carbon fiber but a bit more matte in its finish, making it a nice middle-ground between carbon fiber and black ceramic. Given that it is carbon the 3D carbon case material is very light to handle. Note that given how cool it is with the side of the case being sapphire crystal, even the 3D carbon case version of the MP-11 has a sapphire crystal side of the case. 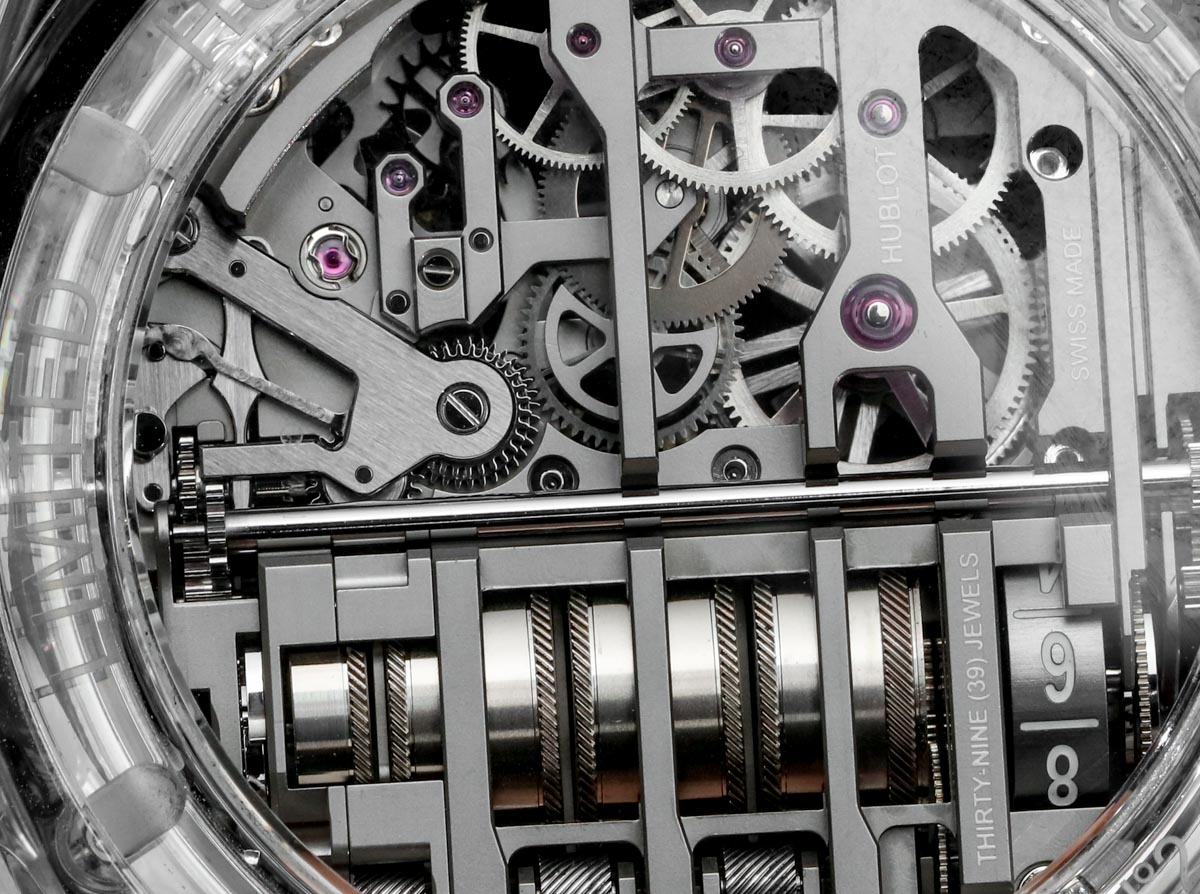 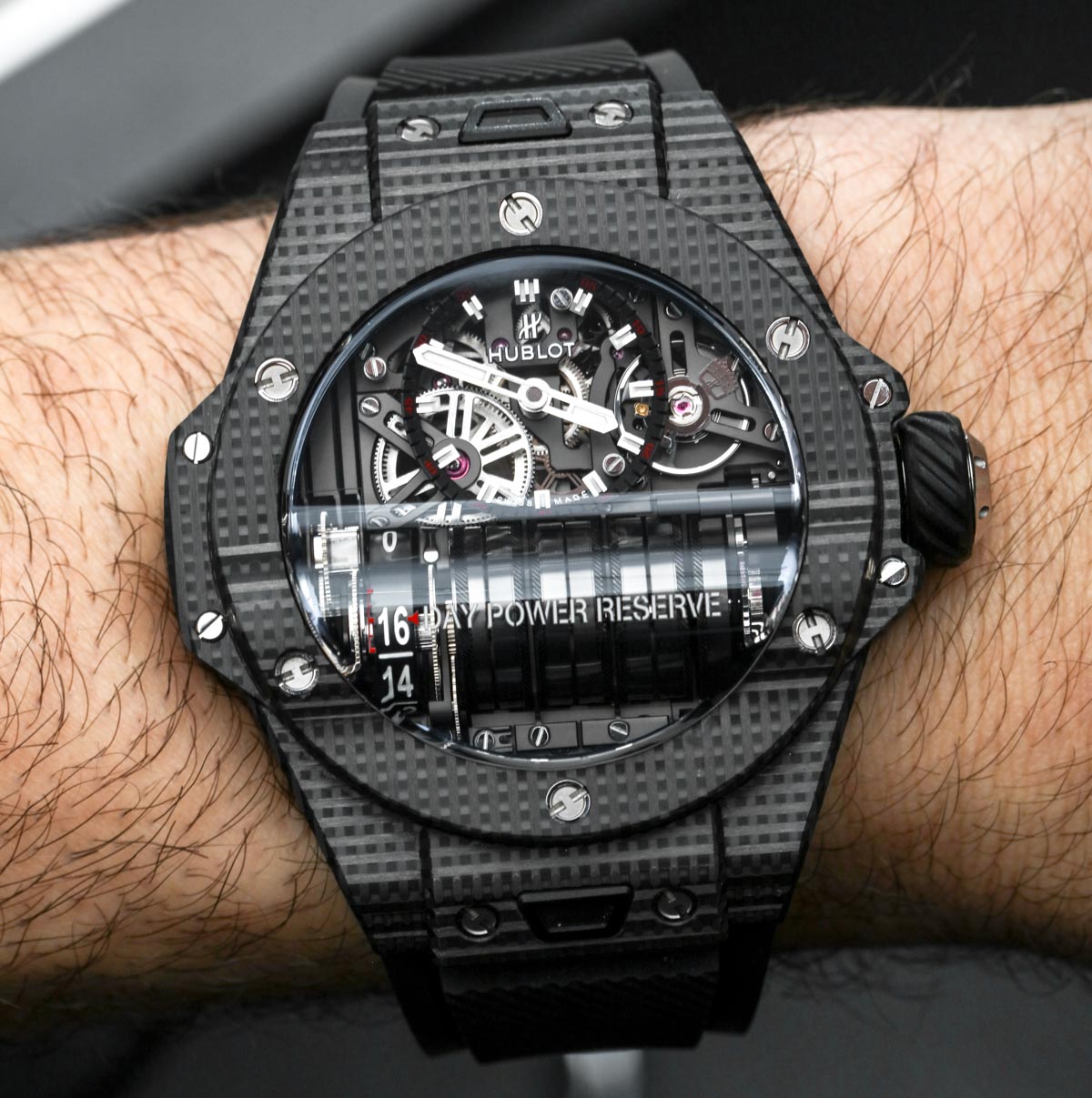 Attached to the 45mm wide Big Bang-style cases is a detachable Hublot strap on black or white which can be swapped out for any other case-appropriate Hublot straps. It’s a fun watch that is both wearable, bold and offers enough conversation fodder to interest fellow watch and mechanical item lovers. Both versions of the 2018 Hublot MP-11 Power Reserve 14 Days watches are limited editions of 200 pieces each. Price for the reference 911.QD.0123.RX in carbon is $82,000 USD and the sapphire crystal reference 911.JX.0102.RW version of the Hublot MP-11 has a retail price of $105,000 USD. hublot.com