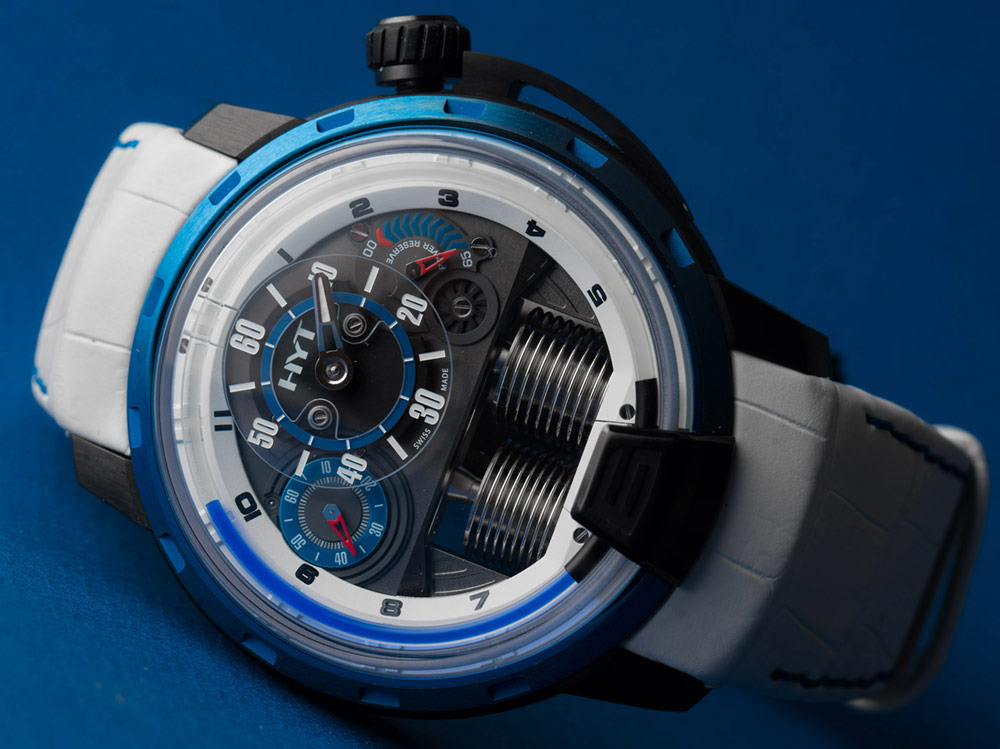 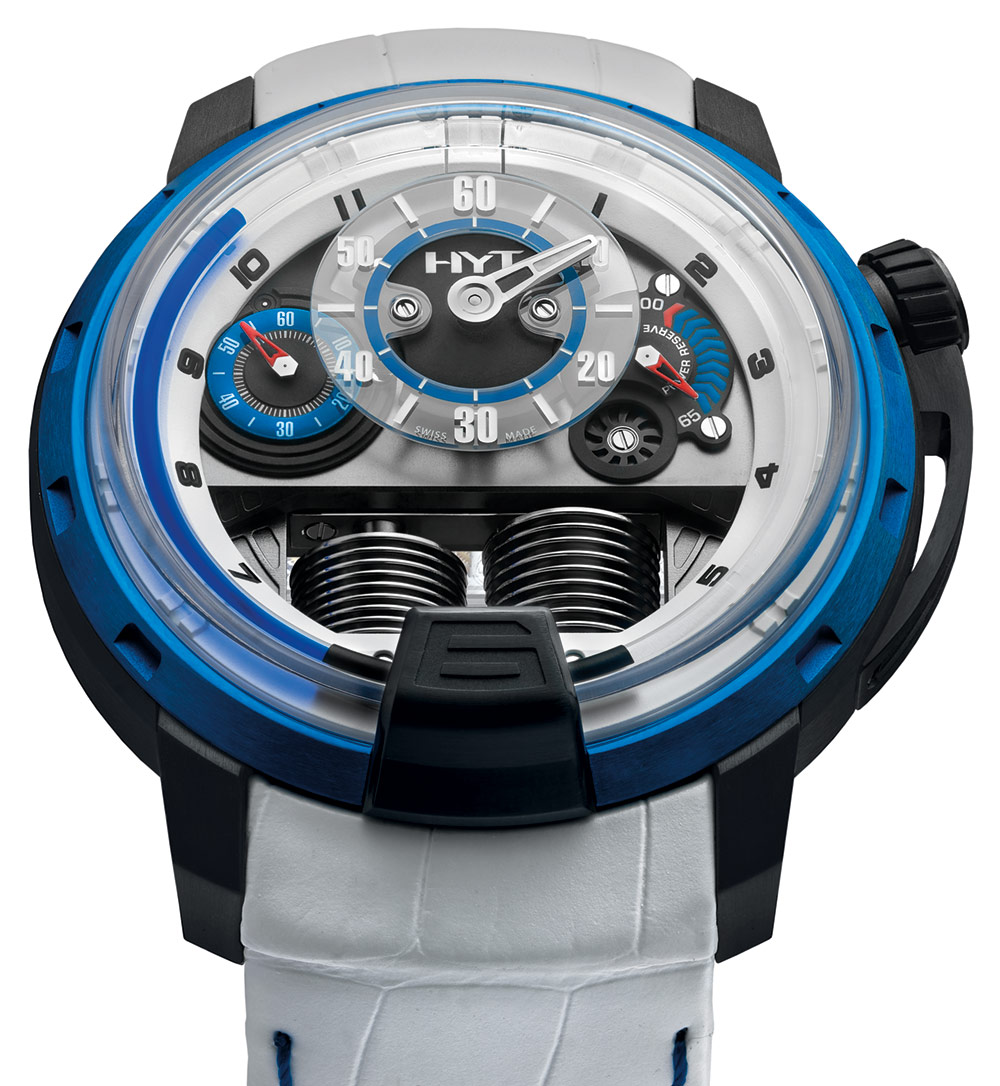 The folks over at HYT call themselves “hydro mechanical horologists” due to their watches which make use of liquid to indicate the time. Recently, the Swiss brand added new versions of their H1 and H4 watches by simultaneously releasing a couple of sporty limited edition watches. One was designed in collaboration with a footballer in the case of the HYT H1 Antoine Griezmann, and the other with a racing team in the case of the HYT H4 Panis-Barthez Compétition. 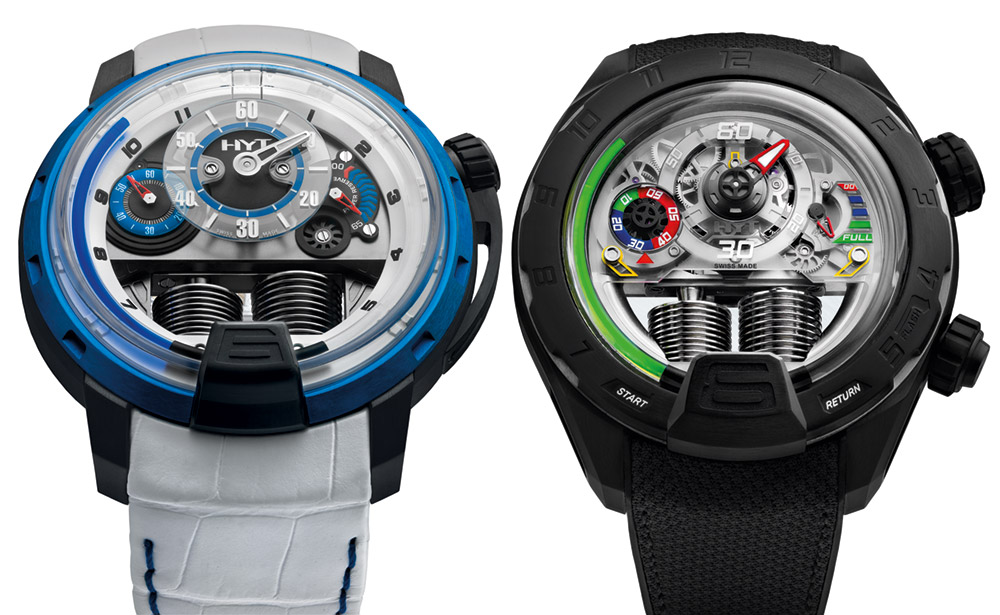 Antoine Griezmann is a centre-forward for the Spanish football club Atlético Madrid, and represents France during the World Cup. Panis-Barthez Compétition is a racing team founded by Olivier Panis, the last Frenchman to have won a Forumla One Grand Prix, and Fabien Barthez, who started off as a football goalkeeper but eventually found his way to motorsports. The Panis-Barthez Compétition team competes in the European Le Mans Series. 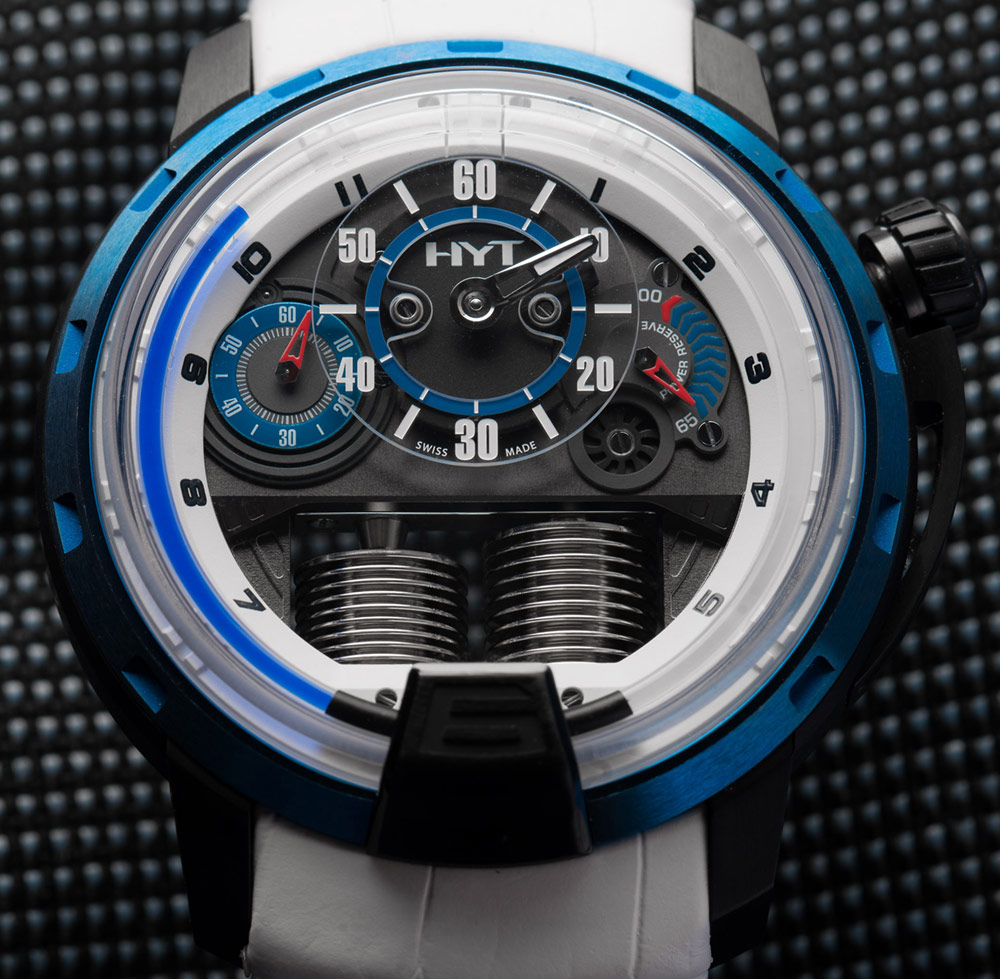 The color scheme for the H1 Antoine Griezmann, blue and white, was picked by the footballer as they are his two favorite colors, we are told. The design and color scheme was meant to reflect a sporty yet elegant quality – though to me it simply looks sporty. On the dial, we have HYT’s signature liquid hour display – this time with a blue colored fluid. The hour ring is white and filled with Super-LumiNova for legibility at night. In the middle, above the bellows that push the liquid through its “capillaries,” we have a sapphire dial which serves as the minute indicator and has a rhodium-plated minute hand – once again with Super-LumiNova. 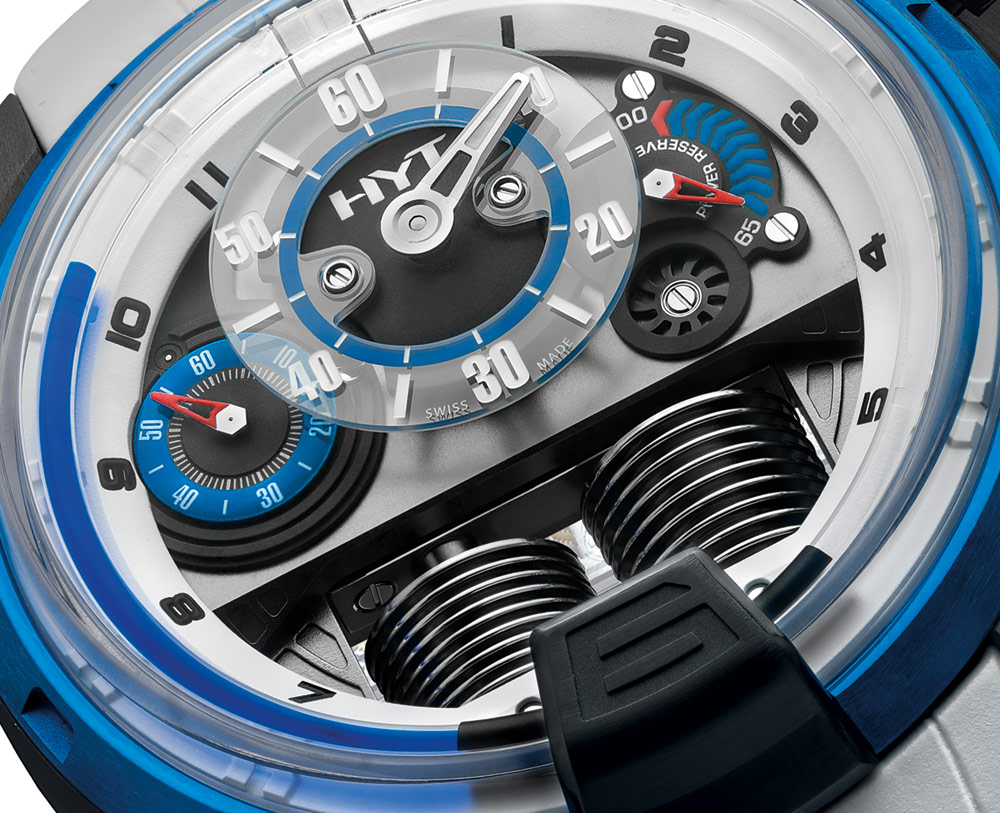 To the left of the minute dial is the running seconds and to the right is the power reserve indicator. These have blue rings and the red hands add a little visual interest to all the blue and white. The case for the H1 is a combination of black DLC titanium and blue PVD. In addition to the two colors, there are also different types of finishing, from bead-blasting, to brushing, to a satin finish. HYT watches tend to be large and at 48.8mm by 17.9mm, this is no exception. Thankfully, the use of titanium should keep it light and wearable. 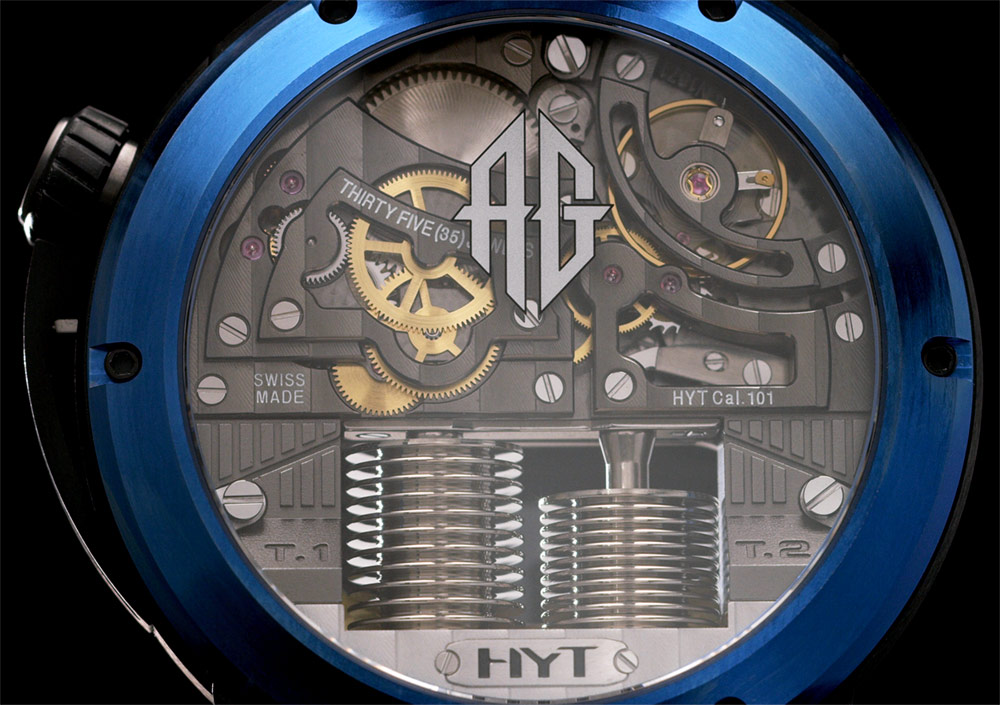 The display caseback for the H1 has Antoine Griezmann’s logo on it, but no other text on the crystal – which gives you a full view of the back of the movement. I believe both the H1’s Caliber 101 and the H4’s Caliber 401 are essentially the same movement with different finishing and more skeletonization in the case of the H4. The movements are both hand-wound and beat at 28,800 bph with 65 hours of power reserve. 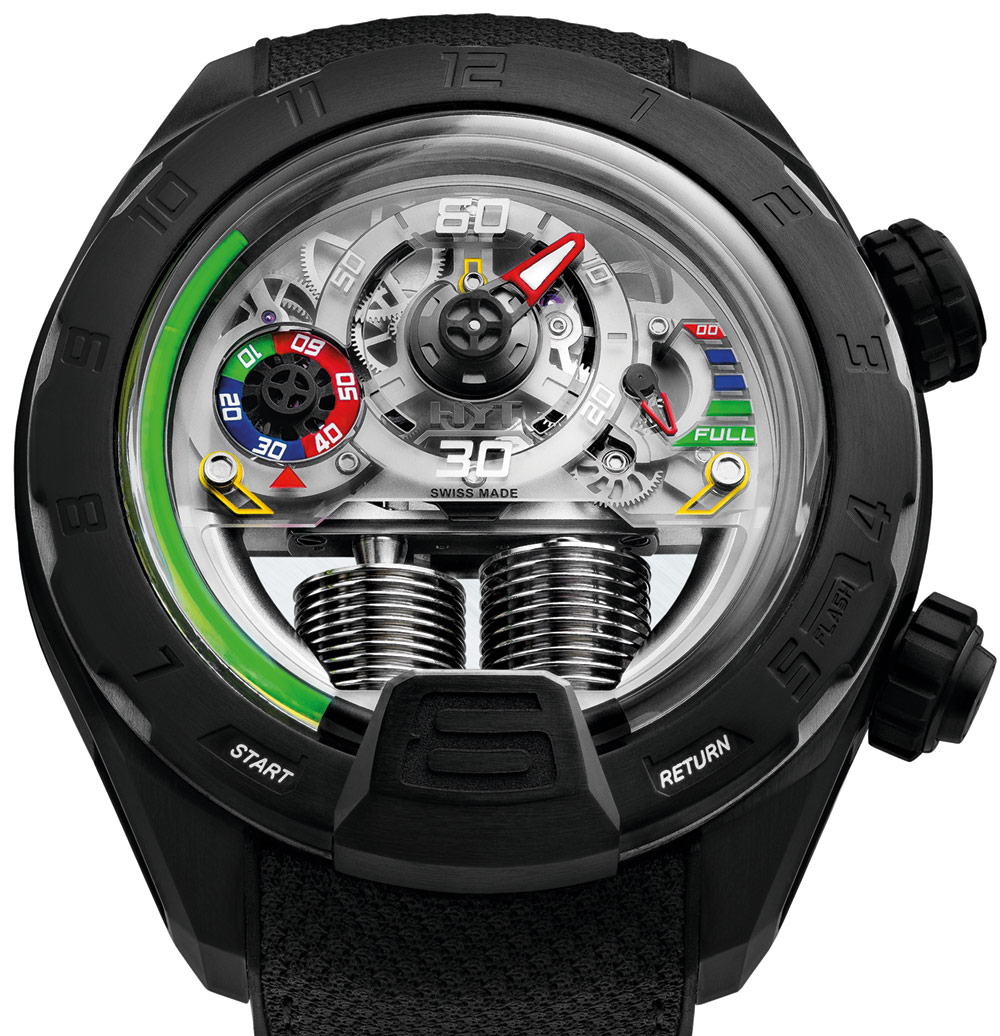 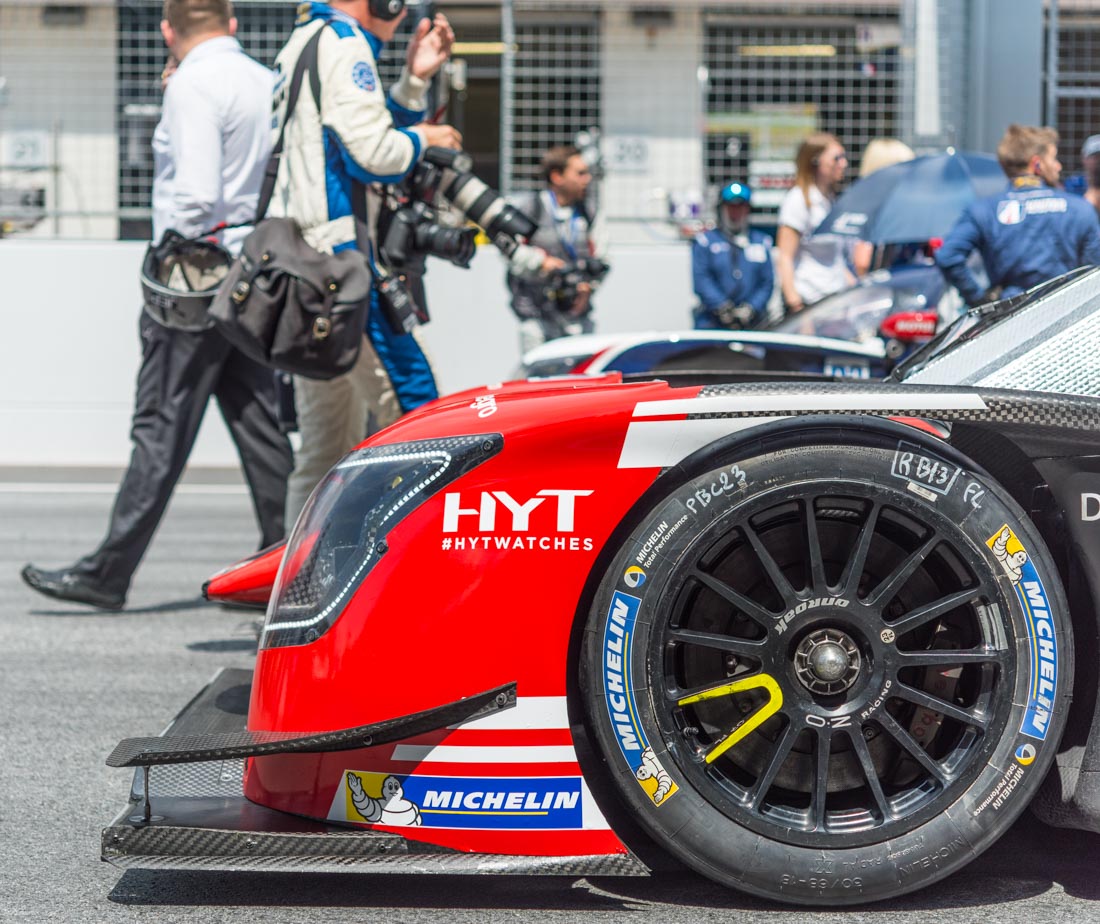 While the HYT H1 Antoine Griezmann was aiming for a sporty, yet refined look, the H4 Panis-Barthez Compétition goes for a more aggressive styling. It is designed by a motorsport team, after all. The case here is black DLC titanium and at 51mm wide by 17.9mm thick, it is slightly larger than the H1 case – primarily due to the wide bezel. Just like the H1, the H4 is rated to 100m of water resistance and has a display caseback. The one significant difference you will notice is that the H4 has two crowns, one at 2:30 and the other at 4:30. 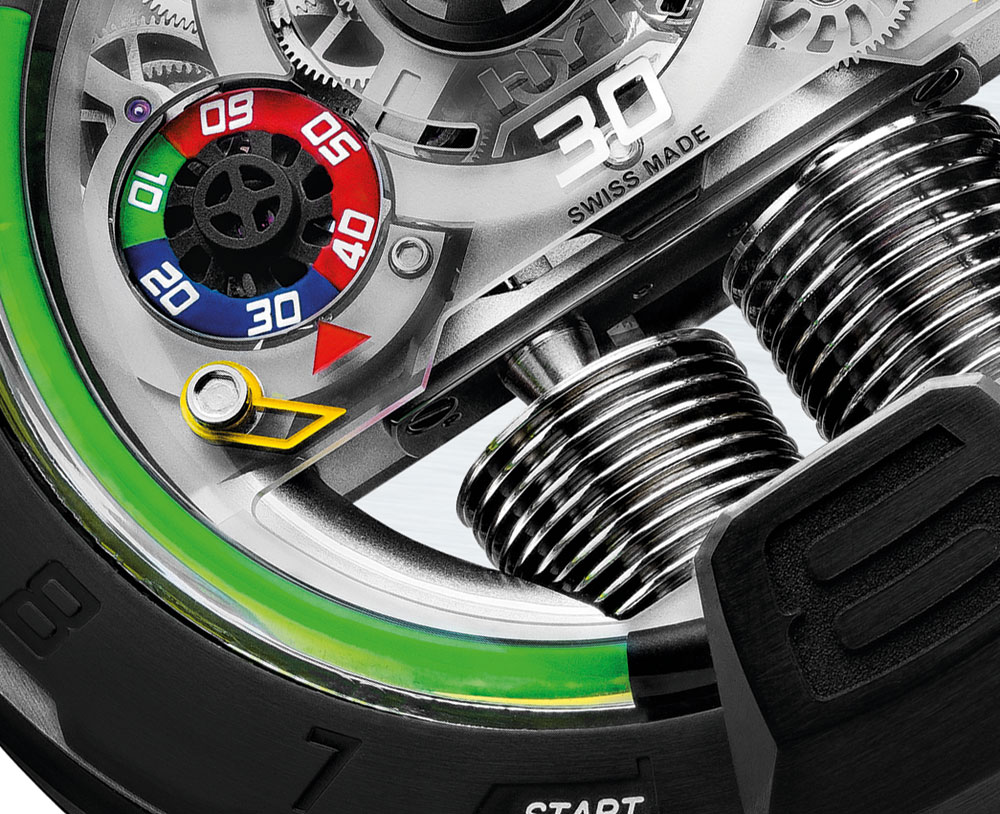 While the 2:30 crown is used for winding the watch and setting the time, the 4:30 crown is used to activate a light module. When the crown is pushed, there is a mechanism which lights up the dial by making the green fluid glow, in the words of HYT, “spectacularly.” The whole system is mechanical, which is quite impressive, and this feature was incorporated due to the motorsport theme of the watch. The “Dynamo” LED backlight has been used in other HYT watches, and you can read more about how it works and see a cool video in our hands-on with the HYT H4 Metropolis watch here. 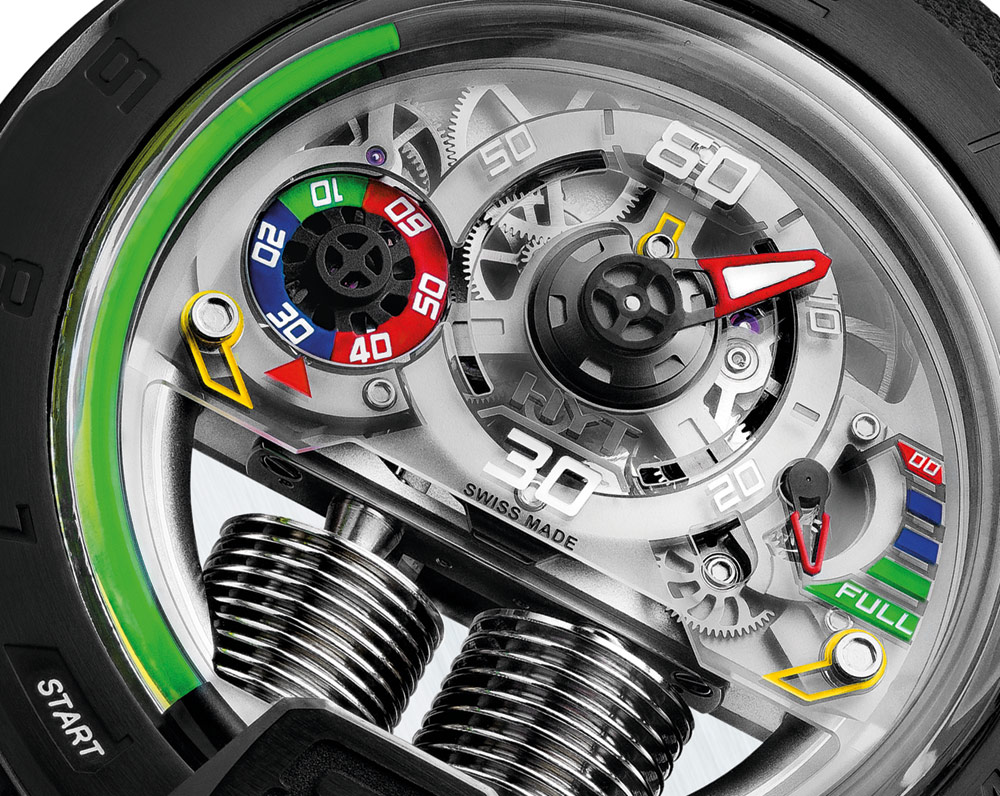 The dial layout is very similar to that of the H1, but instead of an hour chapter ring, the hour markers are engraved on the bezel. Since these markers are black as well, you wouldn’t be able to tell time very accurately in low light conditions and would likely have to estimate the hour by looking at the position of the fluid. While this isn’t a major issue in practice, it seems like an oversight on a watch that is motorsport themed and with precision being one of its primary inspirations. 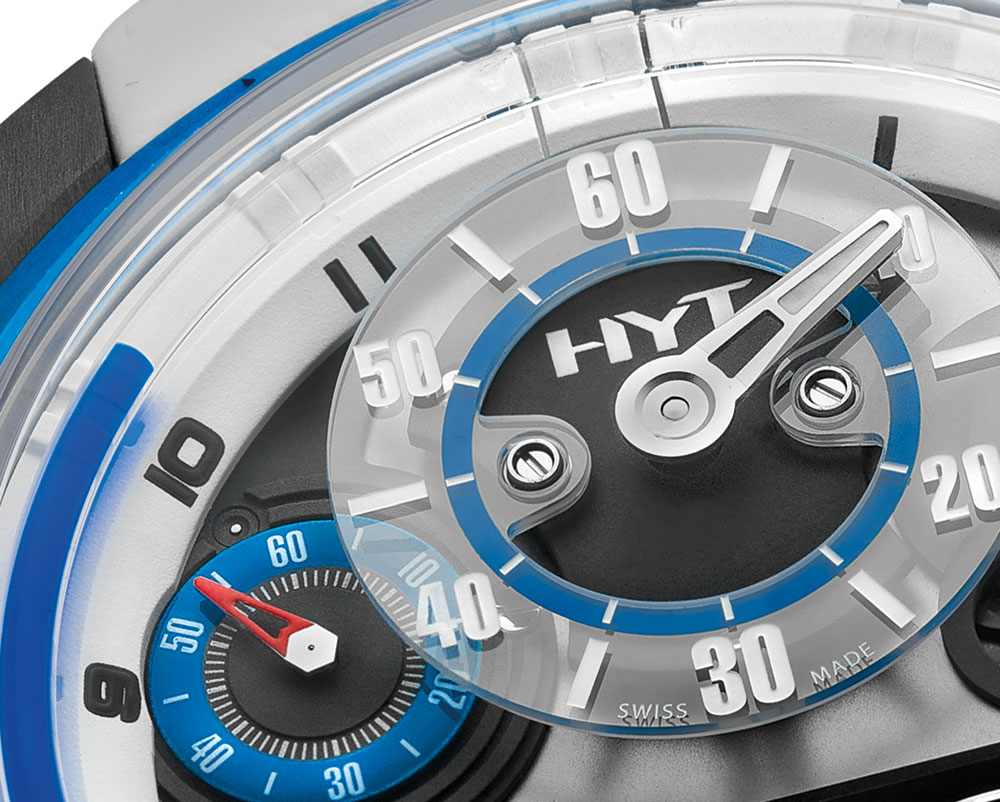 The fluid in the H4 is blue and the seconds ring and power reserve indicators are a mixture of colors – blue, red, and green. There is no seconds hand, but rather a second disc that rotates with a small stationary arrowhead to point out the current second. Instead of the sapphire minute ring in the H1, the H4 has an entire half-dial of sapphire on which the minute track, the power reserve indicator, and the seconds arrowhead is printed. The minute hand is red in color with Super-LumiNova.

While both these watches are functionally similar, they are horologically esoteric and different enough in design and color choices to appeal to different kinds of collectors. Both will be produced in limited editions of 20 each. The HYT H1 Antoine Griezmann ships with a white Cordura strap with blue stitching and has a price of $65,000, while the HYT H4 Panis-Barthez Compétition comes with a black Nomex strap with black stitching for a price of $95,000. hytwatches.com