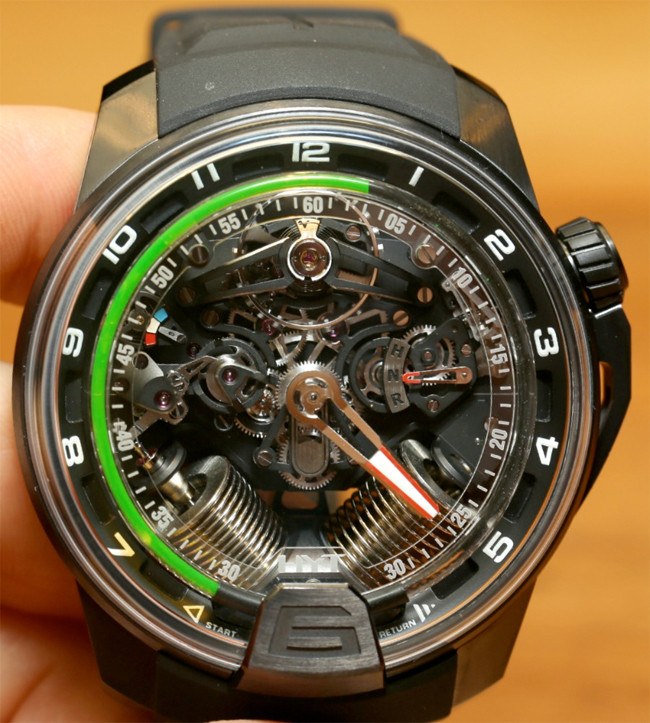 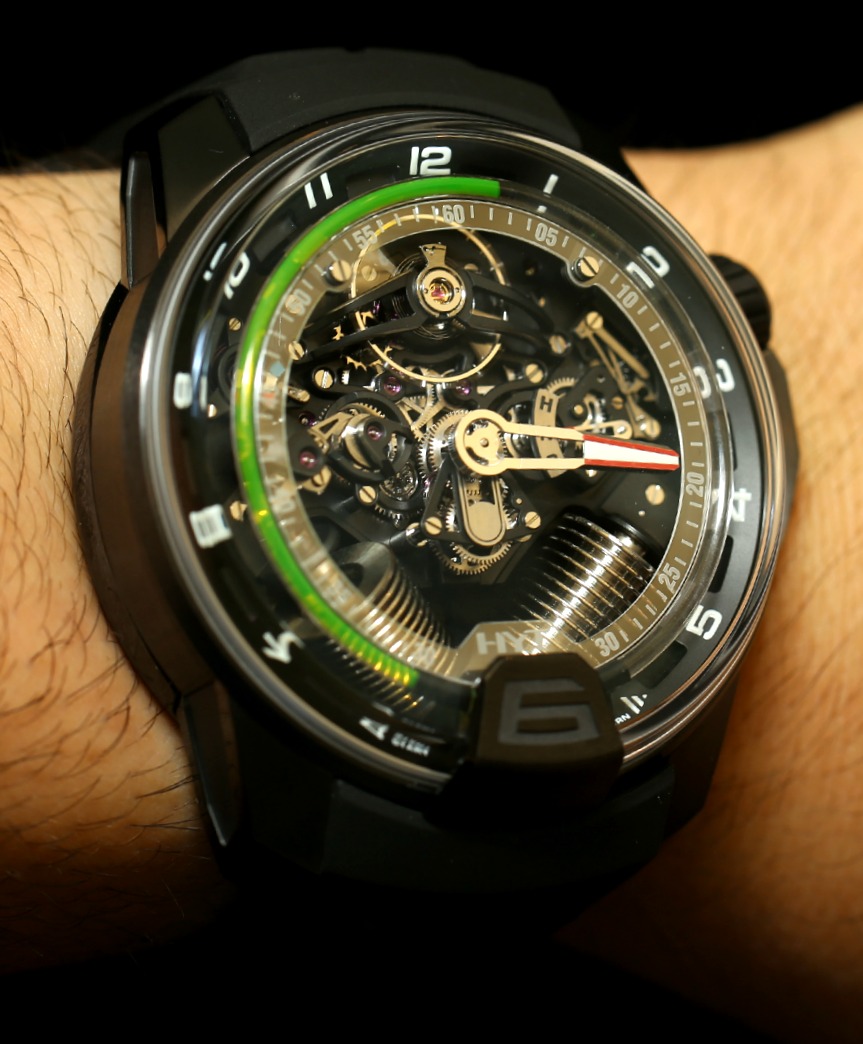 Our meeting with HYT watches is very early on the first day of Baselworld 2013. We arrived at the HYT brand booth before it is totally setup. People around us are putting up displays and arranging neighboring booths in anticipation of 2013’s crowd of press, buyers, and the public. HYT CEO Vincent Perriard is busy checking the microphone for his upcoming press conference and ensuring that small details around the hip black and green booth are just right. This is HYT’s second year at Baselworld, an extremely familiar trade show event for watch industry veteran Perriard. The new booth is bigger and better this year and he has debuted their second major piece, the H2 (debuted here on aBlogtoWatch). 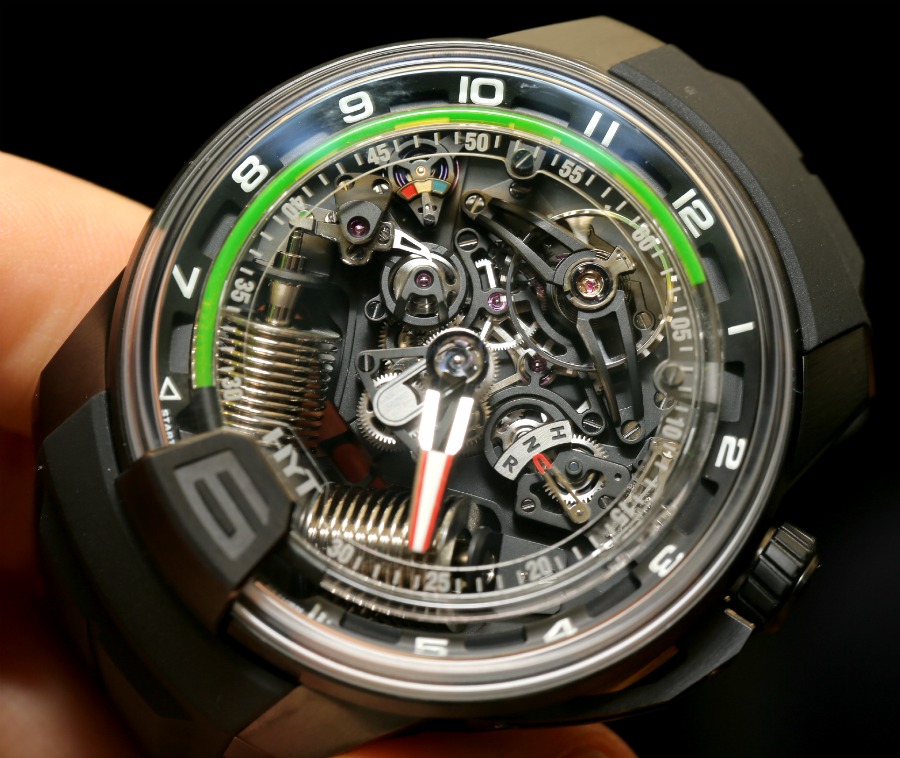 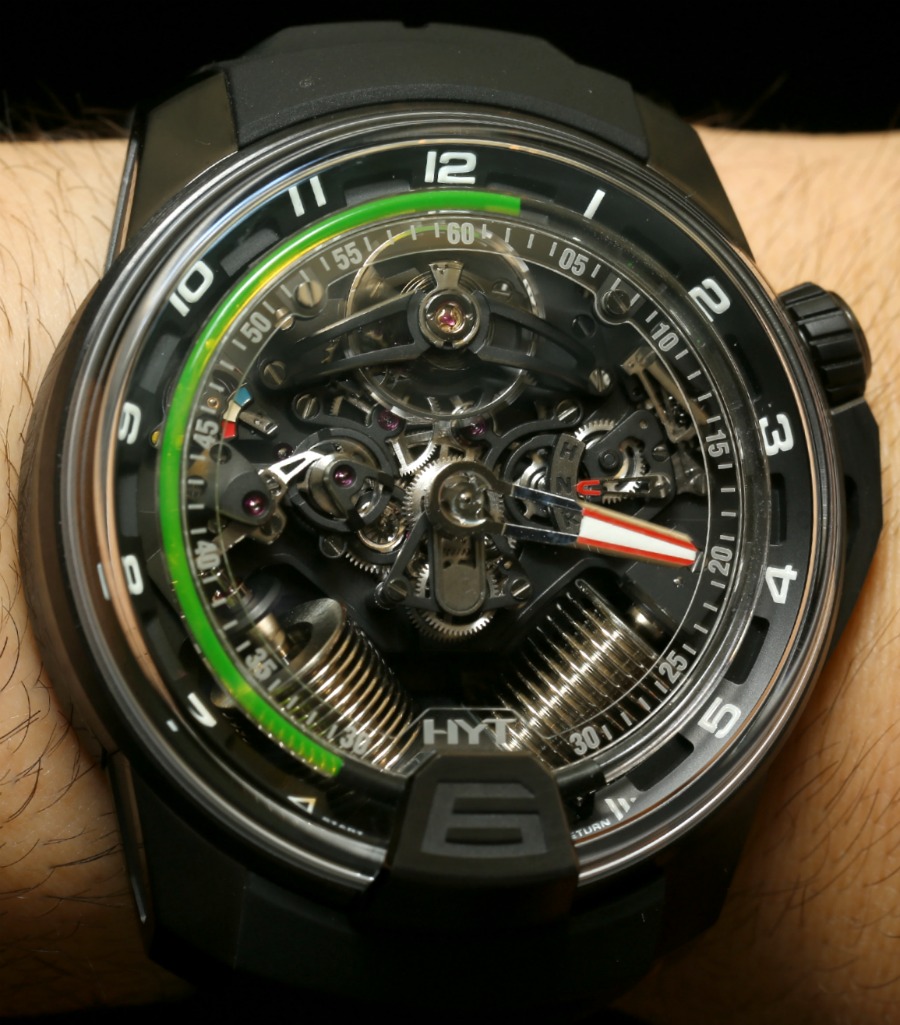 Compared to the H1, the H2 watch is quite different, even though it doesn’t actually do anything different, and still uses the same liquid-filled hour indicator tube. It is different because it is much more of an intense horological object. If the H1 is a sports car produced by Lexus, the H2 is an exotic supercar that is perhaps less practical, but clearly better looking in your driveway for some reason. It happens to be that with its expansive sapphire crystal and deeply exposed movement, the H2 is beautiful… beautiful despite its clear science fiction inspiration that feels like it wants to be an engine much more than a watch movement. There is also the matter of evil robot Darth Vader-esque face you see staring back at you on the rear of the movement plate. A mixture of high-end complexity, HYT’s new watch will make a gear head out of anyone. 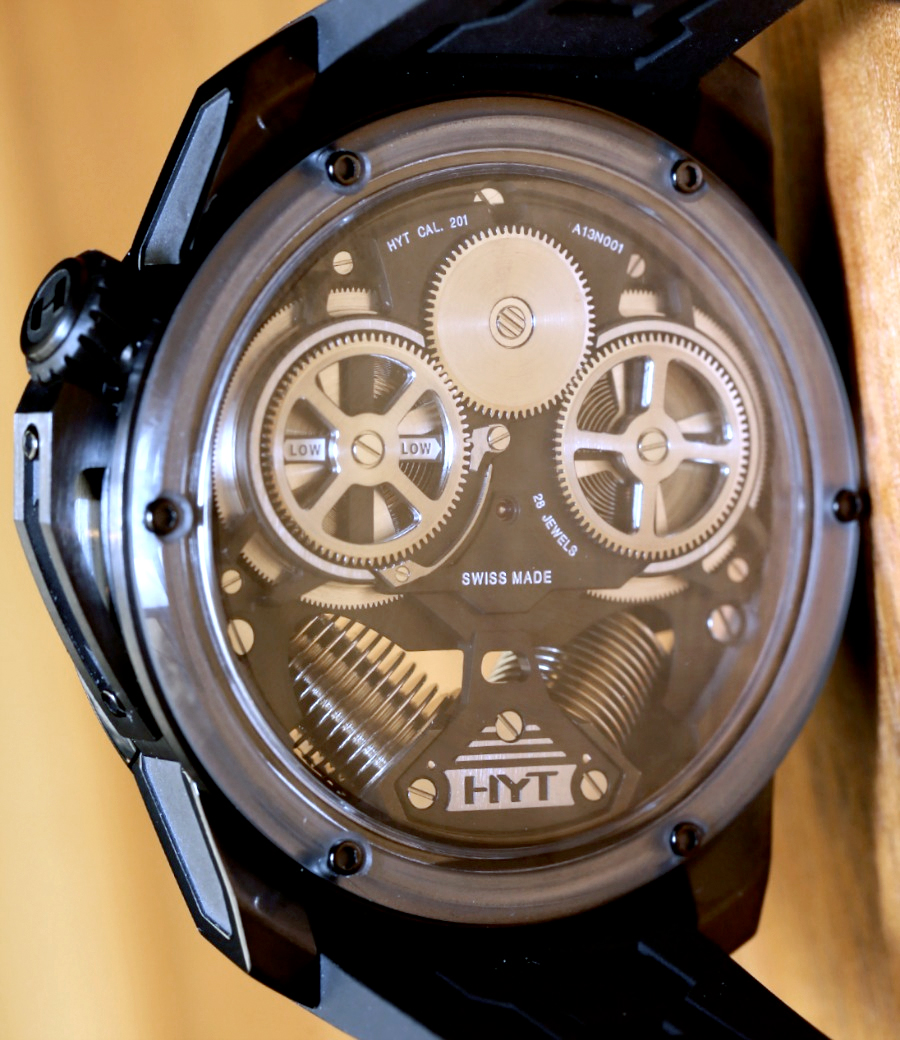 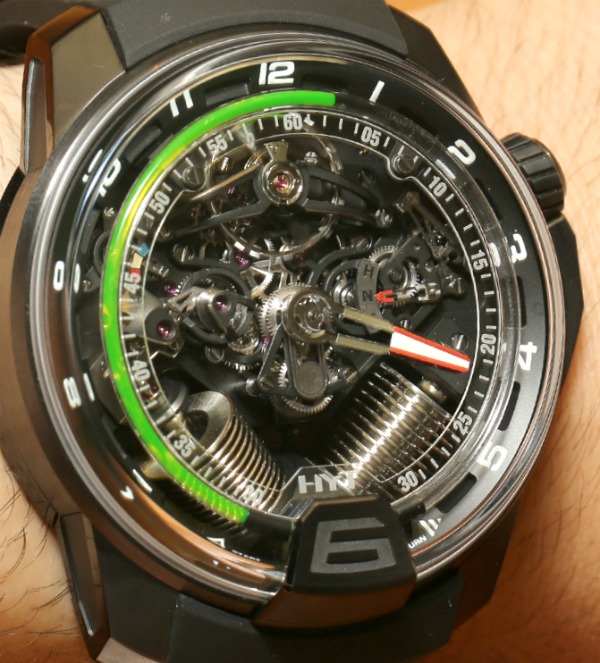 Giulio Papi of Audemars Piguet was responsible for the movement of the H2. Perriard considers him a genius of design especially when it comes to producing deep-feeling complex movements that push the limits of the imagination. For example, because the HYT H2 uses liquid for the hours, it is affected by outside temperature. So what did they do? Produce a special thremo-regulator that ensure the watch operates perfectly in most all conditions. Nevertheless, there is a tiny thermometer on the dial that tells you if the watch is in an ideal operating temperature or if you need to cool it off (or warm it up) a bit.

If you’ve read our initial article debuting the H2, you know about its almost 49mm wide size and black DLC coated titanium case. On the wrist it more than feels like a little engine, with its newly diagonally aligned bellows oriented like pistons in an engine. The bellows are part of the liquid hours system and work with the movement using pressure to move the liquid around in order to indicate the hour. Minutes are shown on a larger central minute hand that completely jumps over the bottom part of the dial as though it didn’t exist at all. It is a form of jumping minutes hand. You also have the large exposed balance wheel near the top of the dial. It just looks great, but may very well have been ruined if they had thrown a tourbillon into the pot. 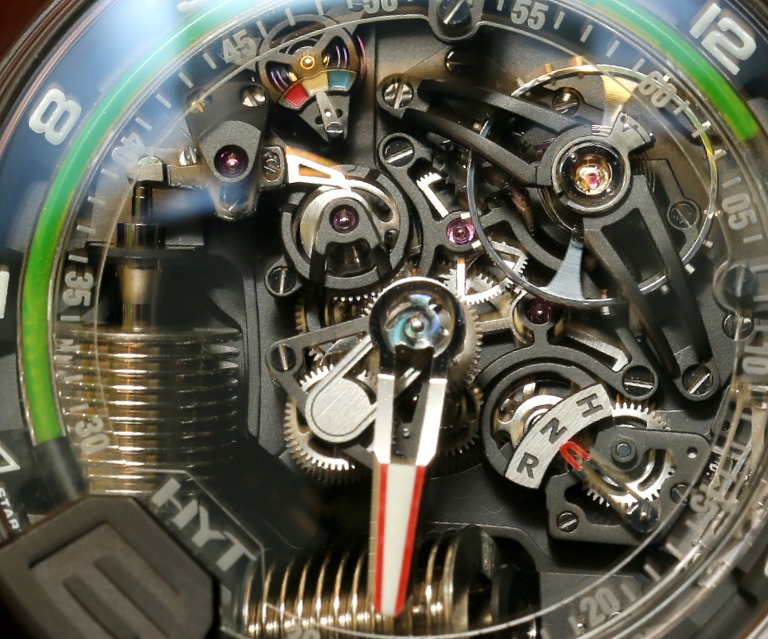 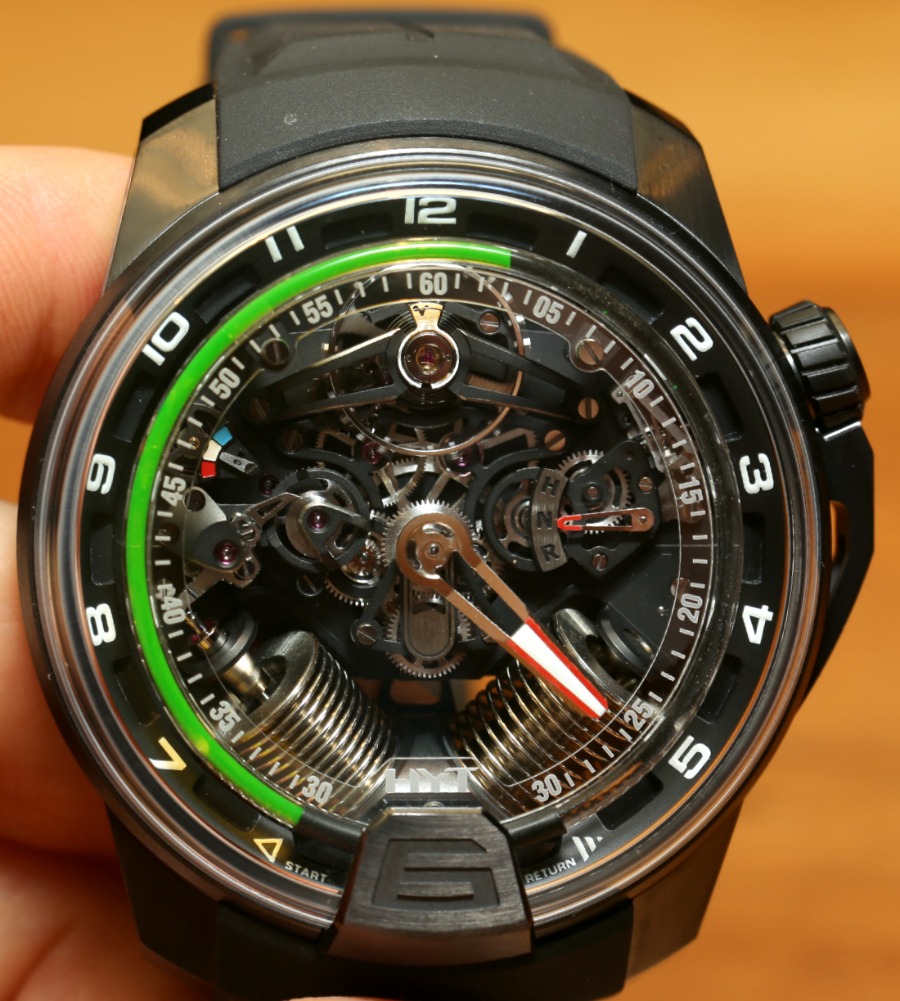 Perhaps the best part of the H2 recipe is that you don’t need to be a watch lover to appreciate it. There is a simple enjoyment bestowed upon you for simply looking into the dial and examining all the tiny little parts. I think high-end watches of this ilk have the potential to do the best as they are almost self evident in their level of impressiveness. Once again, for 2013 HYT will produce only 50 H2 watches. Certainly a stunner if you can manage to put one on. Price for the HYT H2 watch is $129,000.  hytwatches.com