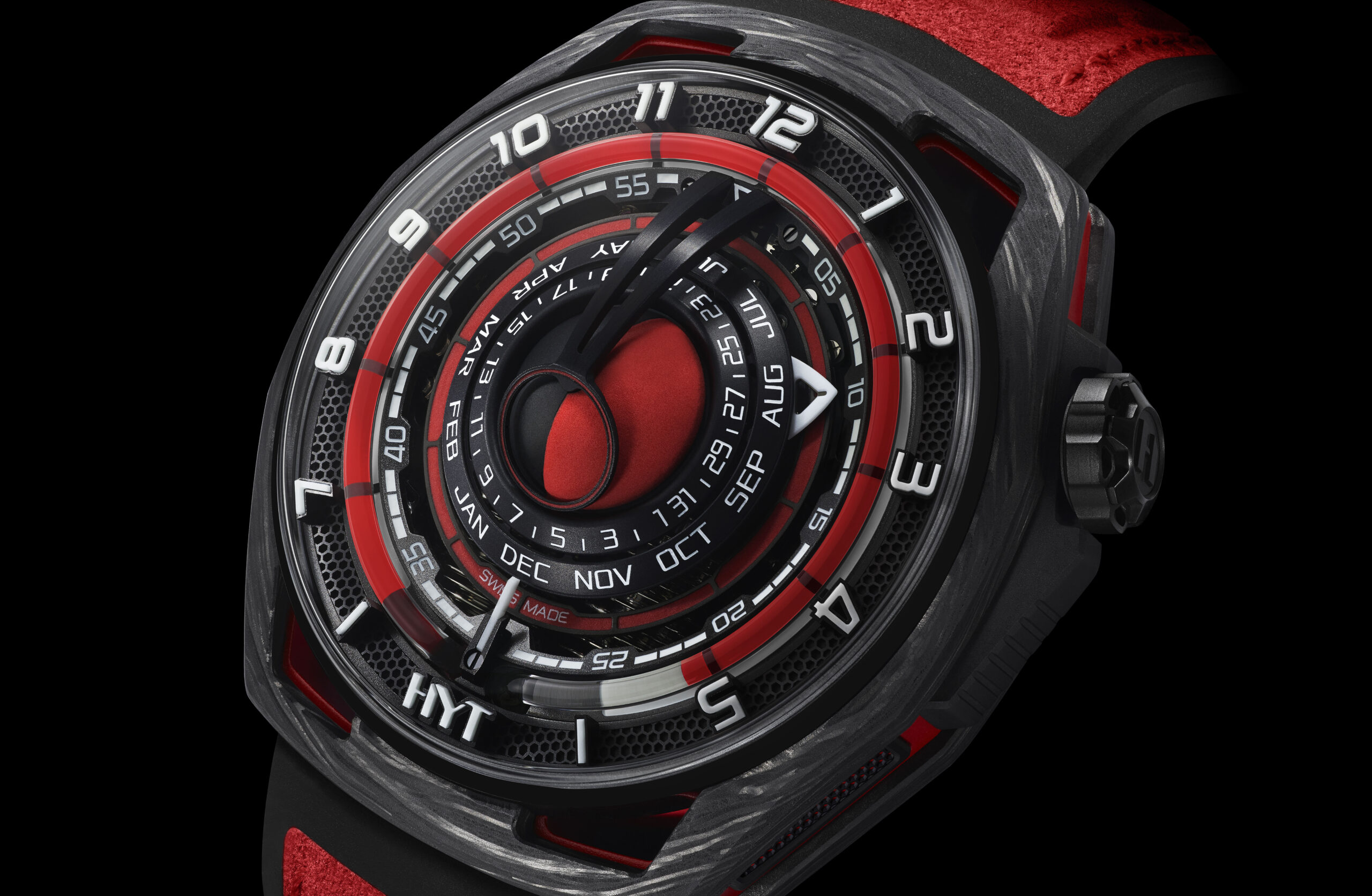 Shortly after being revived from bankruptcy, watch brand HYT debuted its Moon Runner watch in mid-2022. ABlogtoWatch has covered the two previous versions of that watch, White Neon, and Supernova Blue. Now a new colorway, Red Magma, is added next to it in the Moon Runner lineup. While the Moon Runner retains the brand’s fluid DNA, it proved that HYT would use its second chance to reinvent itself and push boundaries. The cylinders that store and move the fluid are now relegated to the back of the watch, and an innovative display takes center stage on the dial. 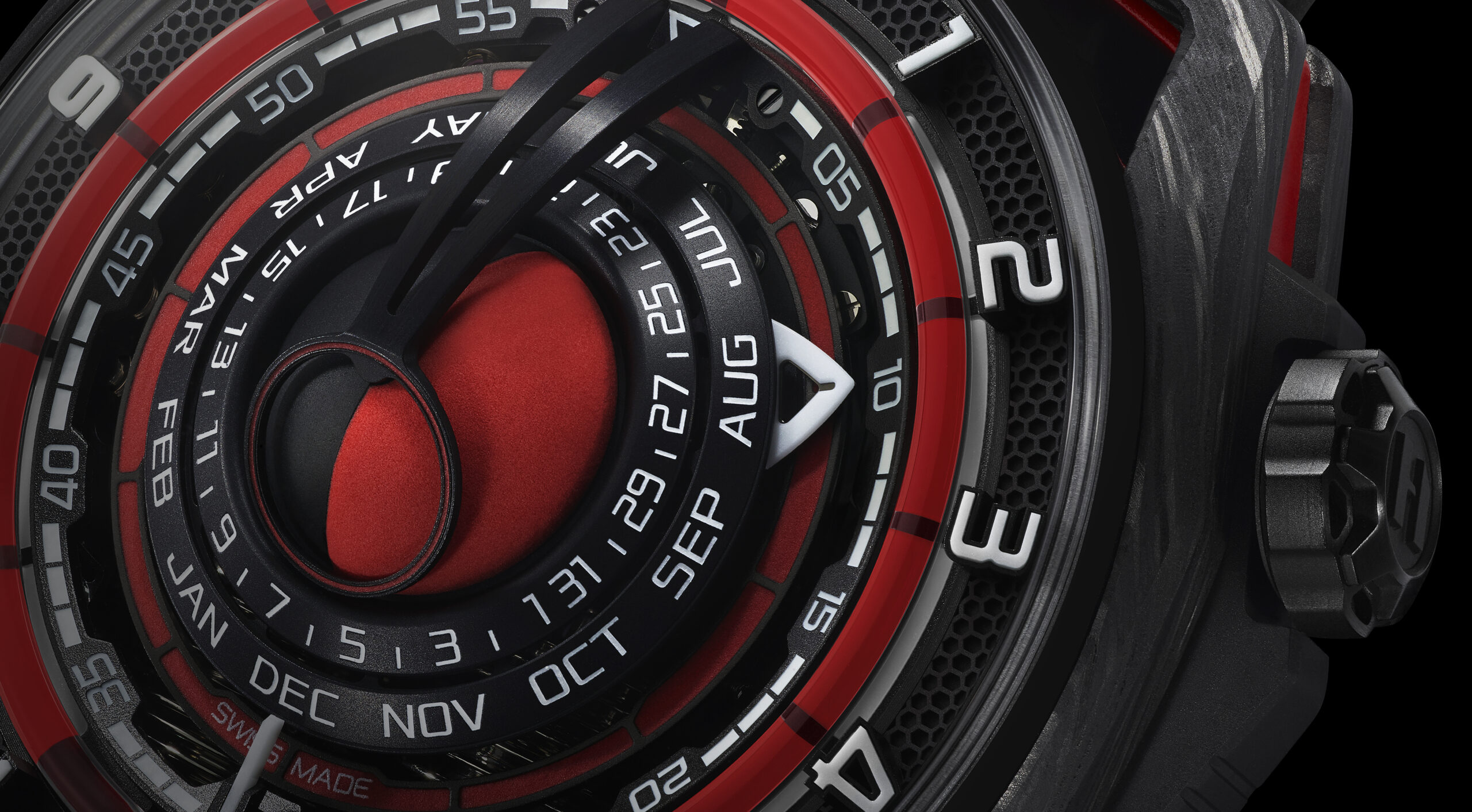 All three versions of the Moon Runner make find innovative ways to use luminous materials. As with other versions of the Moon Runner, the transparent tube housing the fluid display sits above a luminous ring, allowing the time to be read in the dark. Other critical displays on its 58-piece dial are also luminous. A first for the Red Magma, the minute hand and hour markers, as well as the month and day displays, are made from SLN (read: 3D printed) “Lumicast” luminous plastic. As a nice final touch, the red moon also glows. 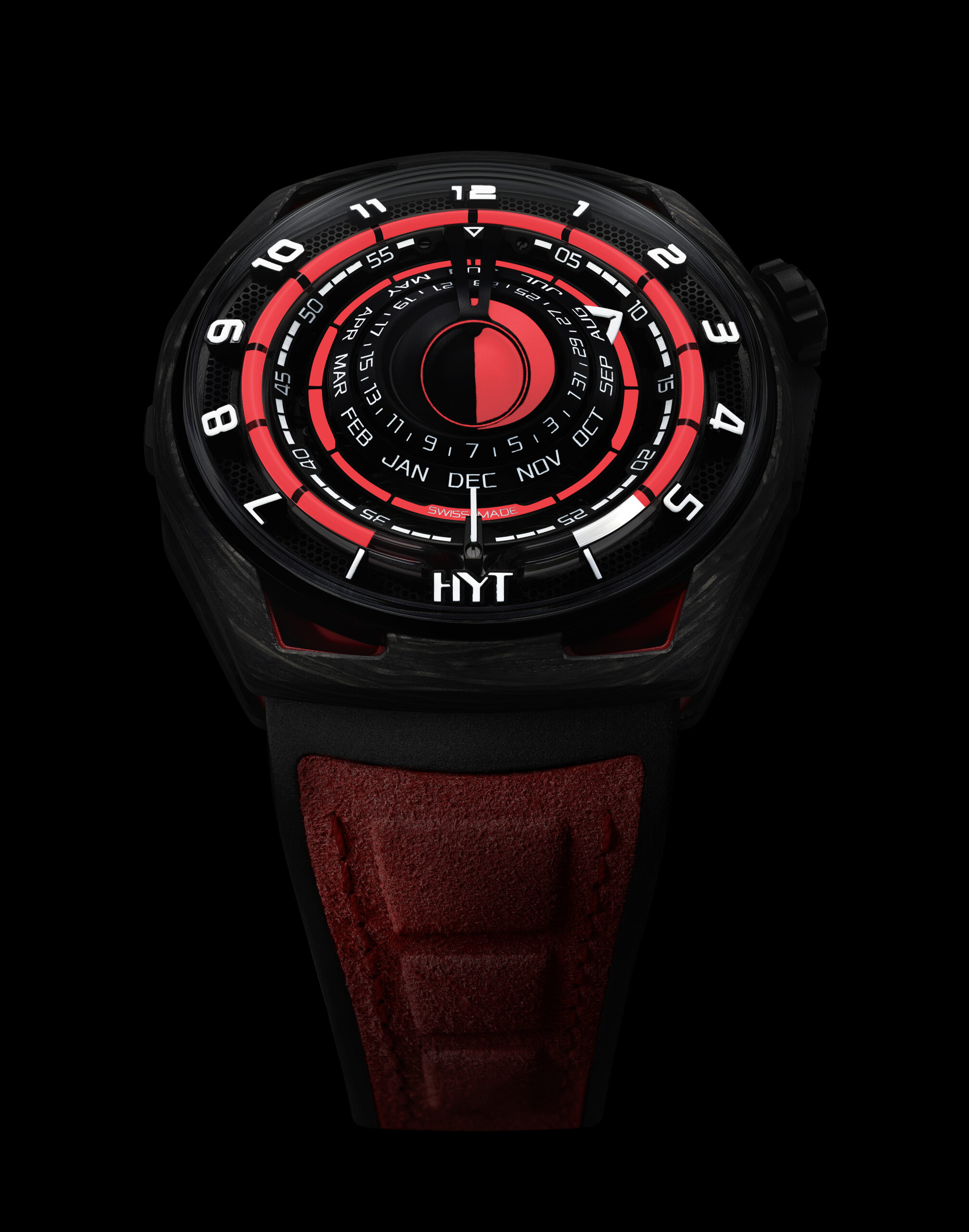 Conceived to “unravel the mysteries of the red moon,” Red Magma has its hydraulic fluid rendered in a corresponding color. Caused by the refraction of sunlight reflected off the moon when it is at a low angle on the horizon, the red moon is said to be a bearer of messages. While the Moon Runner can’t display literal messages, the dial does pack in a lot of information. Retrograde hour and minute displays surround a 3D moon phase, with an annual calendar and day display squeezed in between. 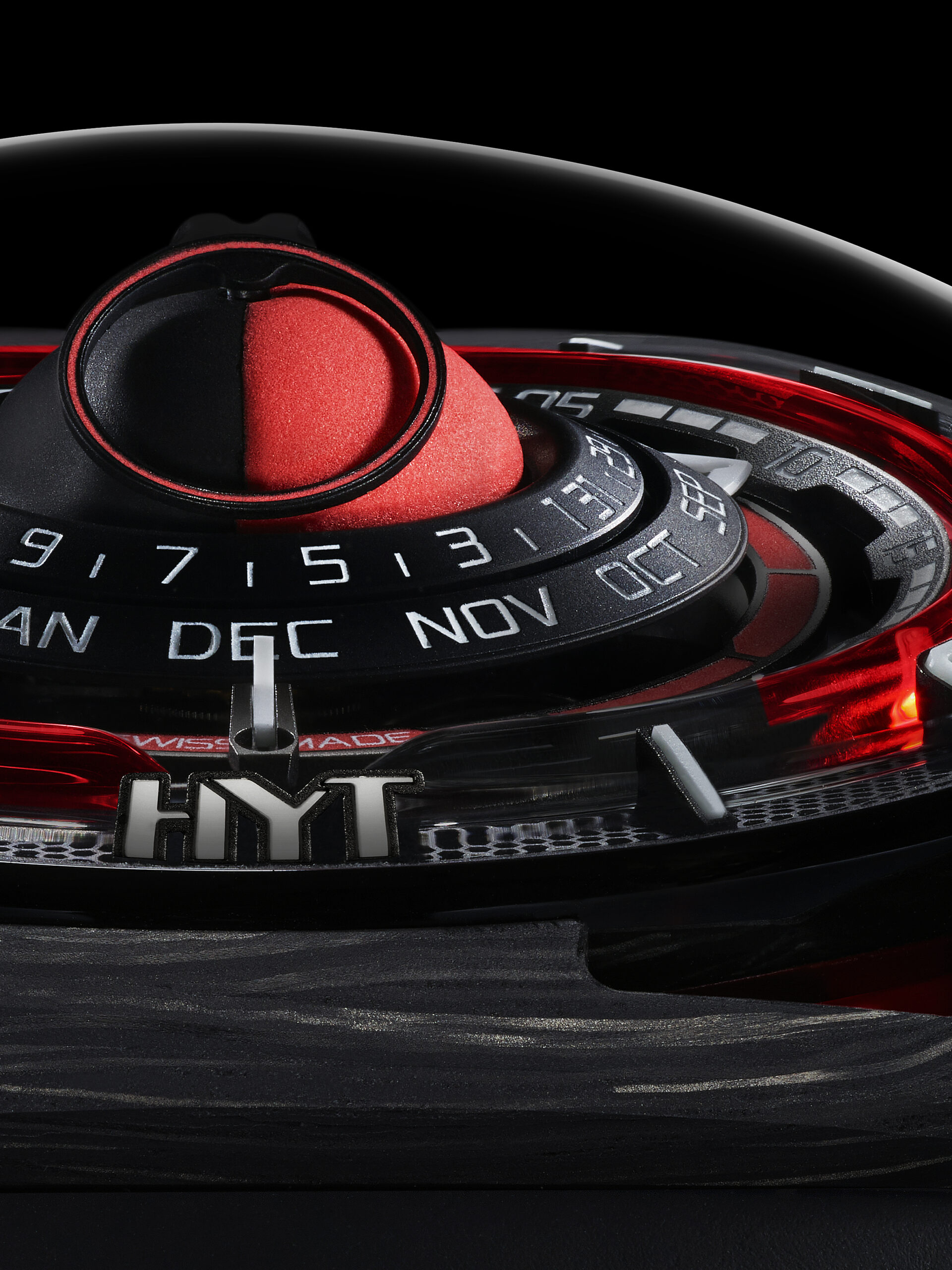 In addition to its attention-grabbing appearance, the dimensions of the Moon Runner are not for the faint of wrist. It comes in at 48mm-wide, 52.3mm-lug-to-lug, and 21.8mm-thick, with 50 meters of water resistance. It is fairly light for its size, however, as the case is made from carbon fiber and titanium. Most of the thickness is in the large dome (and anti-reflective) sapphire crystal, and the case sides are much thinner. The case design also makes it feel like it wraps around your wrist when you strap it on, so it wears better than the dimensions would indicate. The crown being offset between 2 and 3 also helps. The watch is large and bold, which is exactly what it is intended to be. 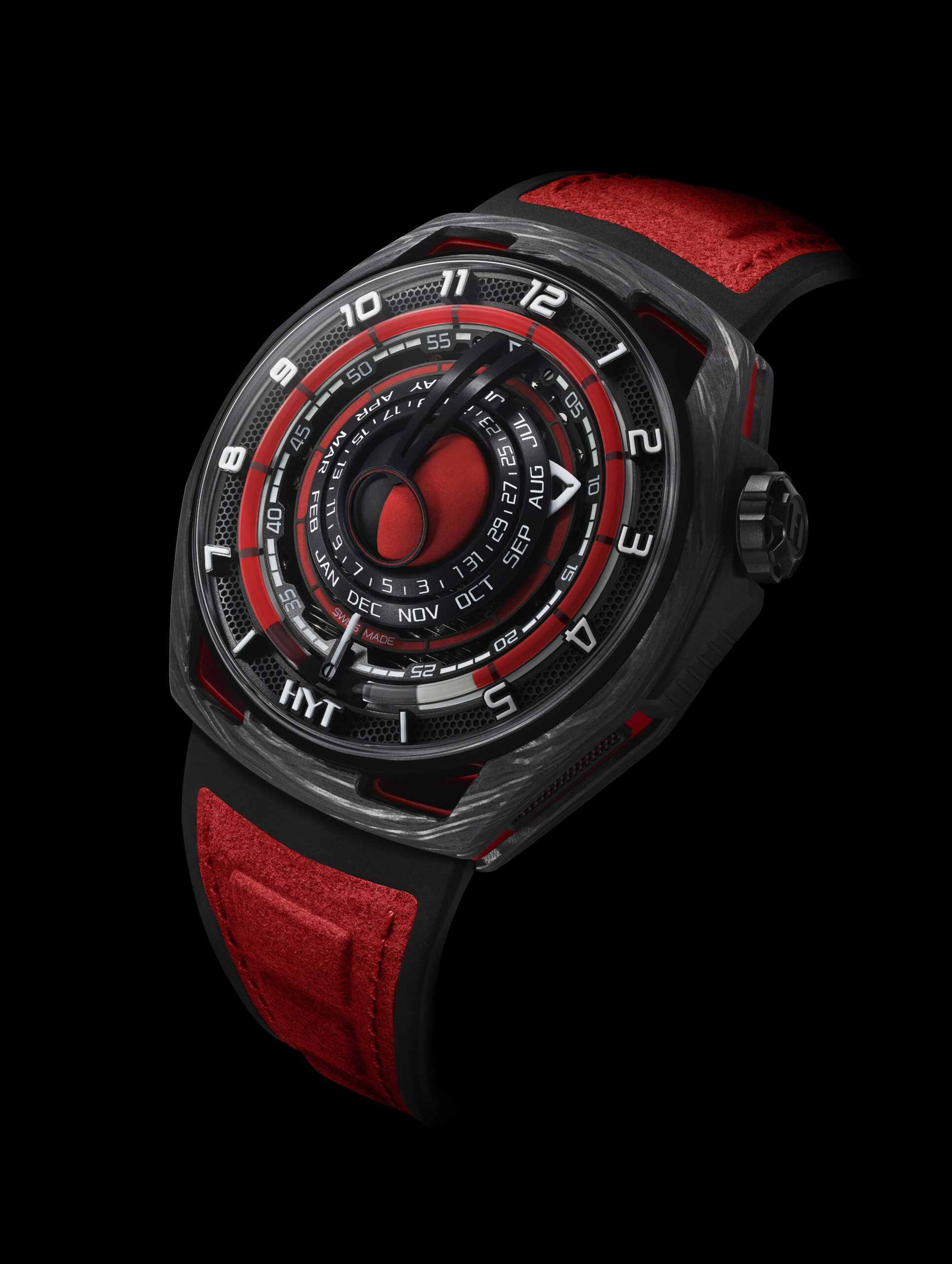 HYT’s manually wound 601-MO calibre powers the Moon Runner. Using 41 jewels, it oscillates at 28,800 vph. Despite the tremendous amount of power that the hydraulic mechanism likely consumes, it still offers an impressive 72 hours of power reserve. As with previous HYT watches, a pair of reservoirs with flexible bellows expand and contract thanks to a cam mechanism. The cam compresses one of the bellows to push fluid through what the brand calls capillary tubes, filling up the reservoir at the other end. Two immiscible fluids (fluids that will not mix) are used to ensure that there is always a distinct line to indicate the time. To compensate for fluid expansion due to temperature fluctuation, one of the bellows houses a thermal compensator. The hour display is also retrograde, meaning that the fluid quickly retracts to the left bellows once the time reaches 6 o’clock. 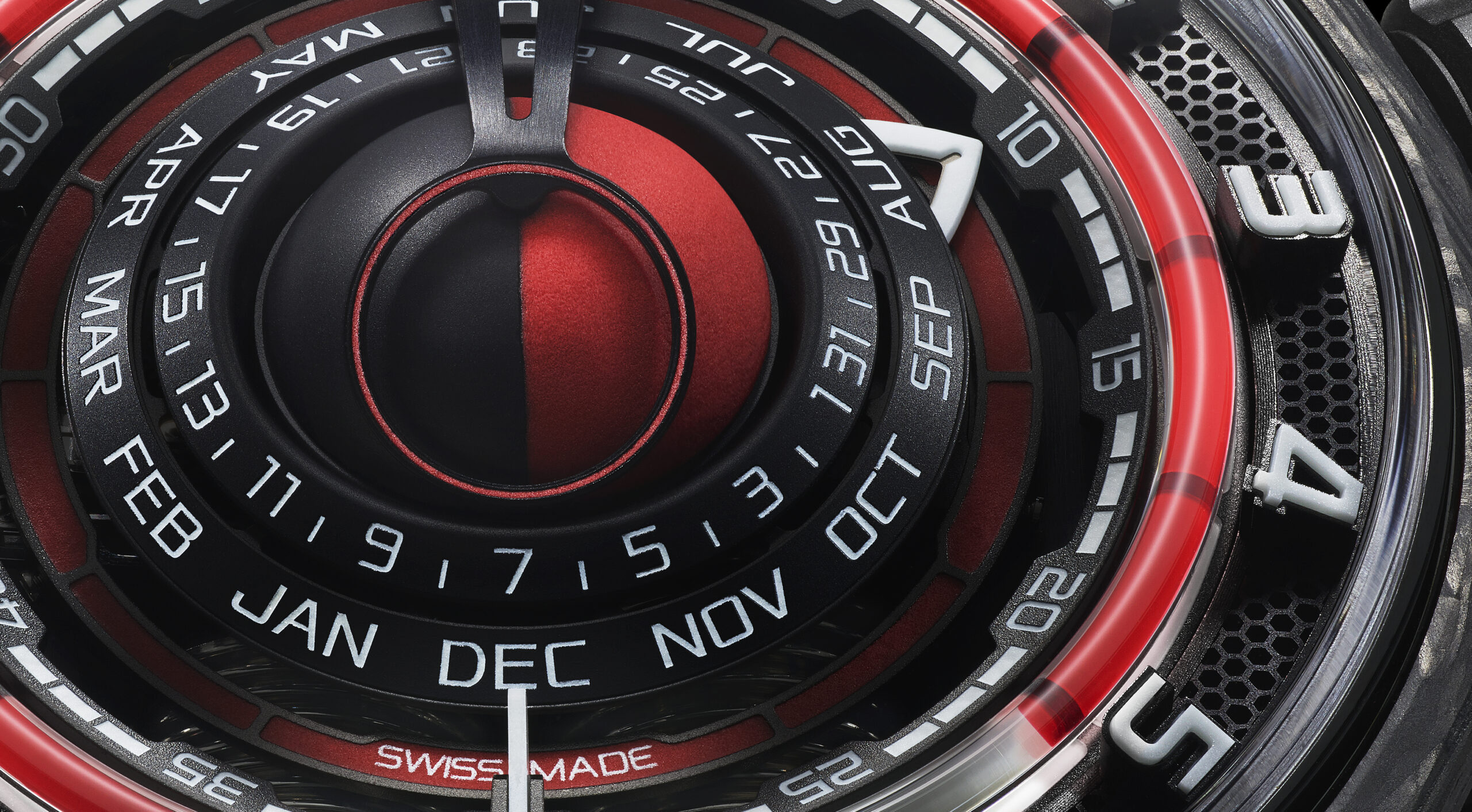 While this is not a watch for every person (or every budget), it is clearly not intended to be. Because of its limited production, only 27 people will have the opportunity to buy one anyway. For the person who has seen and worn everything, however, it does offer a completely unique mechanism and time display. The HYT Moon Runner Red Magma H02757-A will carry an official retail price of CHF 120,000. For more information, please visit the manufacturer’s website.