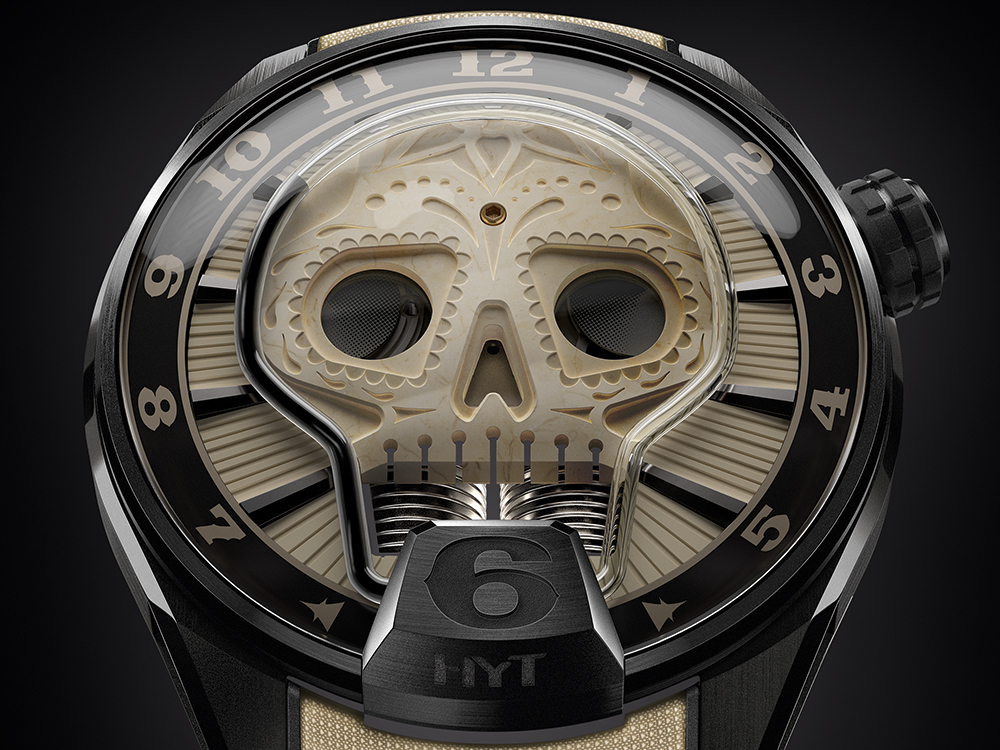 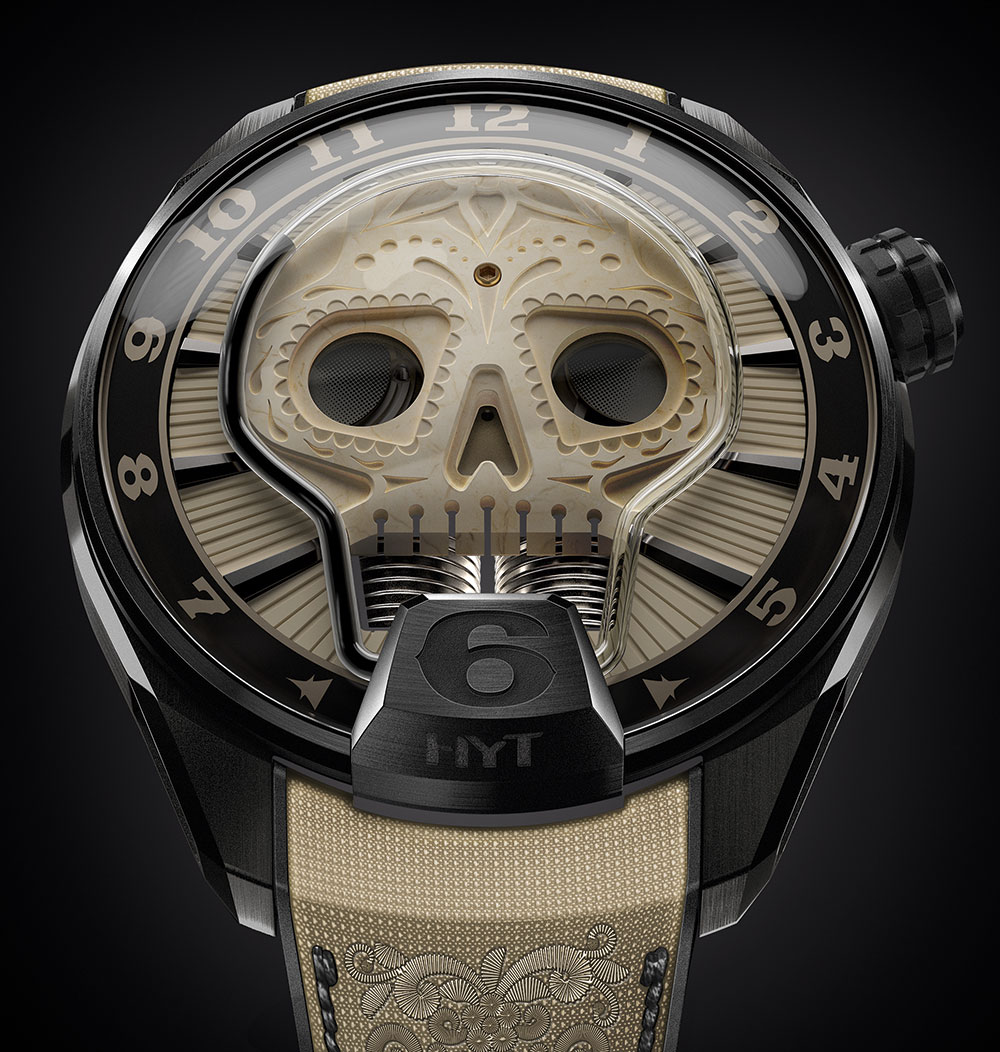 Swiss watch brand HYT like to call themselves the “Hydro Mechanical Horologists” for good reason, as they were the first and still are the only watchmaker to use liquids to tell time. And the HYT Skull watch collection is the brand at its most abstract. Not only do the large HYT Skull collection watches display the hours via liquid tubes, but their dials are giant, in-your-face skulls. In the case of the new HYT Skull Vida watch, you can add a dial carved from woolly mammoth tusk ivory to the talking points and controversy.

As you would expect, trying to incorporate a movement that manipulates liquid to display the time in a case that measures something like 50mm across is no mean feat. As a result, HYT watches are often highly technical and complex. However, that doesn’t mean that the brand cannot be philosophical. In coming up with the first watch in their Skull collection, HYT wanted to remind wearers that time is fleeting and ephemeral. And subsequent releases have built upon that idea. However, their latest in the series, the HYT Skull Vida, is easily the most thought-provoking yet. 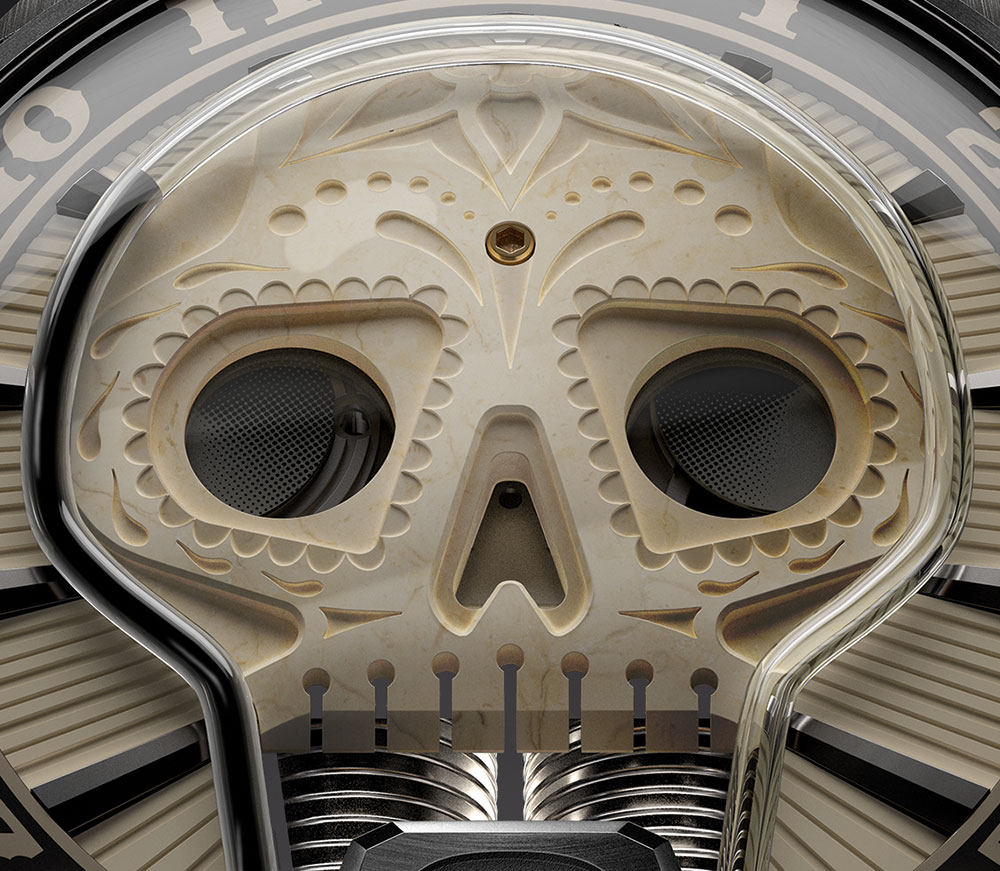 Like the rest of the watches in the Skull collection, the new HYT Skull Vida is a large watch measuring 51mm wide and nearly 18mm thick. It has a black DLC titanium case with brushed and micro-blasted finishing. It also has a large screw-down, rubber-coated crown and screw-down sapphire case back. Despite the screw-down components, water resistance is rated to just 50 meters. The hours are marked out on the bezel, and at 6 o’clock is a large black DLC titanium protuberance (not really sure what to call it) that has become a signature of many HYT collections. 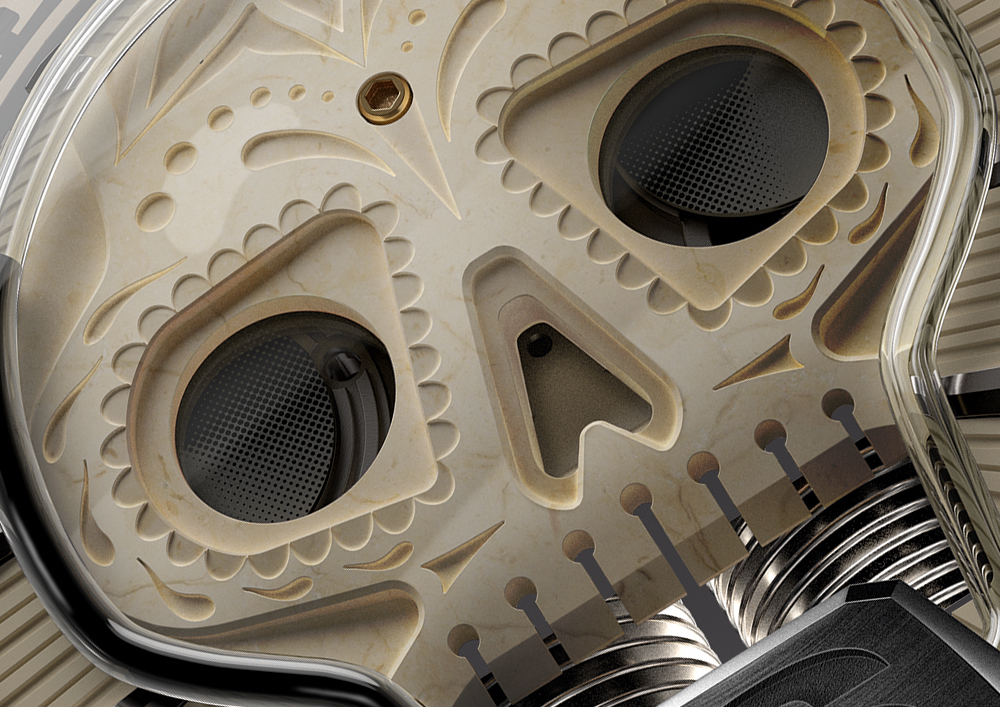 While the case is pretty familiar among watches in this collection, it is the dial that stands out. There’s a prominent skull, of course, but this time, the skull is handcrafted out of ivory obtained from a Siberian woolly mammoth, which gives the dial its creamy hue. But more importantly, the decision to use ivory from the extinct woolly mammoth is especially poignant – if not controversial – and can be interpreted as a reminder to wearers that our time on Earth is limited and that we must make the most out of it. As if the skull itself were not enough. Further driving this message home is the expression of the skull, which is different from other watches in the Skull collection. If you look carefully, its eye sockets are round and this gives it a more sorrowful look.

According to HYT, the ivory had to undergo a stabilization process that was several months long before it could be worked on by master artisans. Considering the rarity of mammoth ivory and the lengthy preparation required, the engravers had to be especially careful when crafting the skulls used in these watches.

Time is told on the HYT Skull Vida in the same manner as the other HYT Skull watches. A thin capillary tube made out of medical grade glass is folded to form the outline of the skull. It is then filled with two immiscible liquids, one in black and the other transparent. Time is read by looking at where the level of the black liquid is in relation to the bezel. There are no separate minute or seconds indicators, so in a way, the HYT Skull Vida watch is read like a single-handed watch that displays only the hours. To complete the look, the Skull Vida comes with an embroidered beige fabric strap and a black DLC titanium buckle. 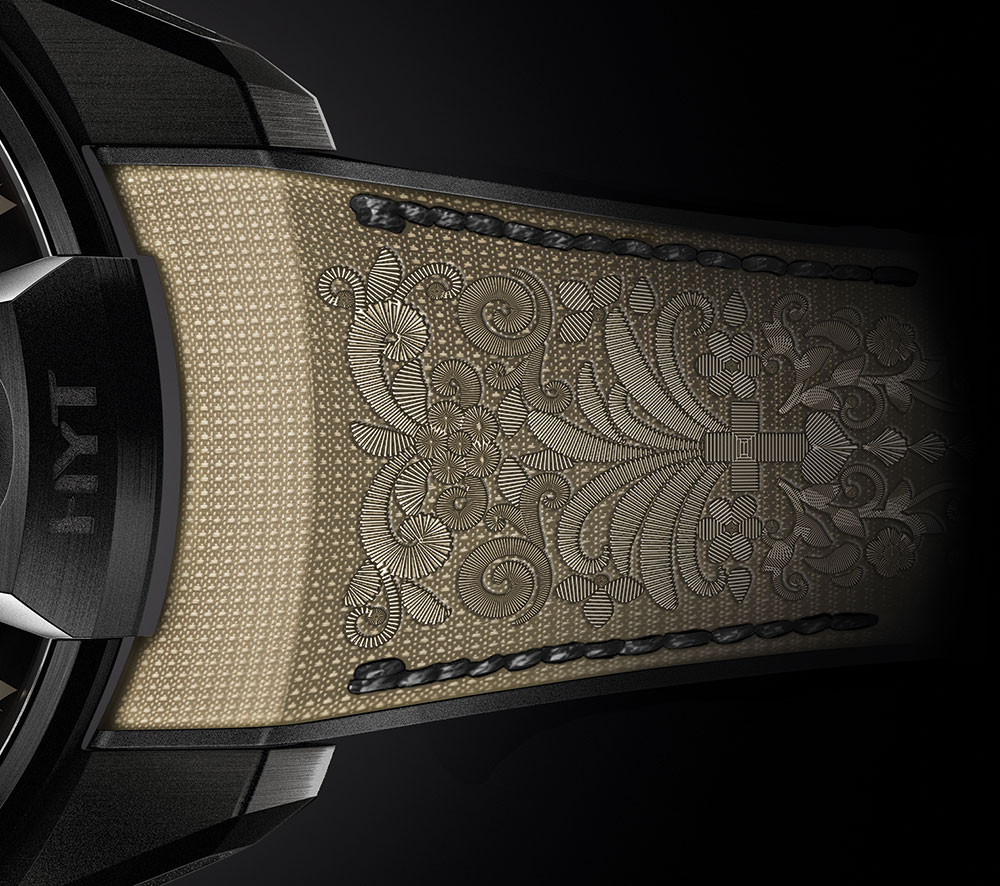 The liquids in the capillary tube are manipulated entirely by HYT’s own hand-wound mechanical movement. It beats at 4Hz and offers a power reserve of 65 hours. The movement is visible through the sapphire case back and it has bridges beveled by hand and decorated with Côtes de Genève patterns. 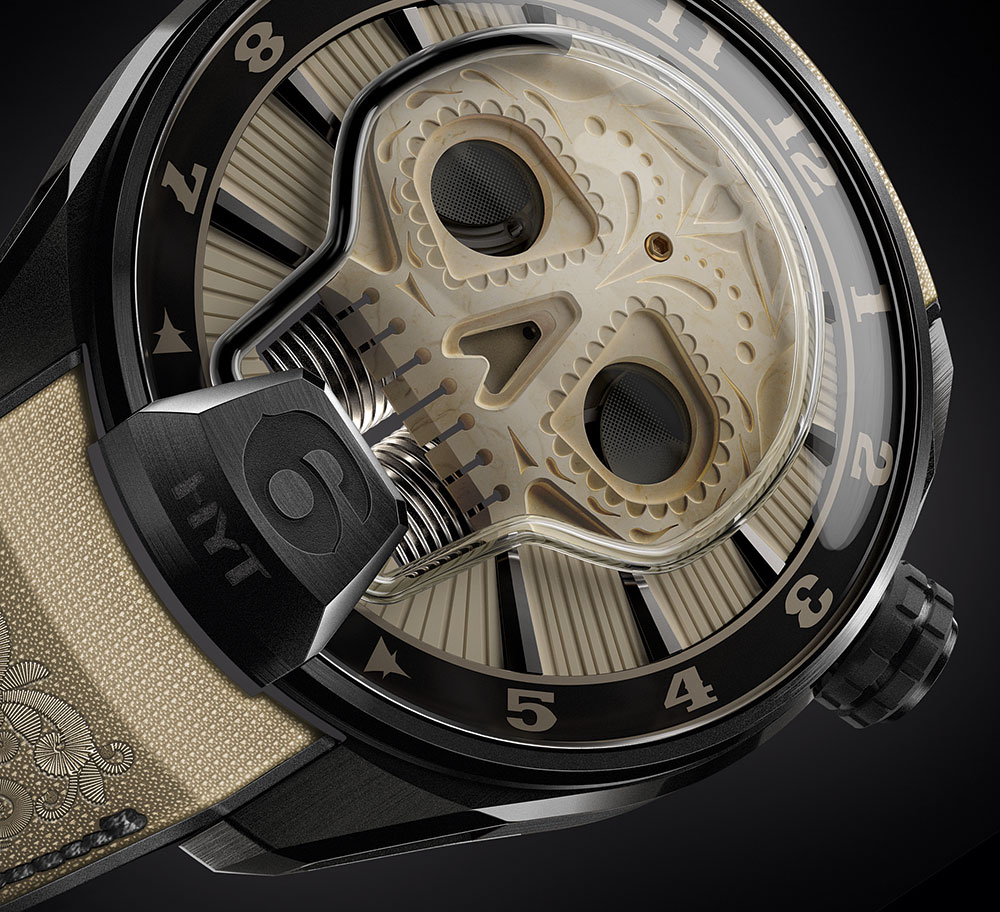 Thanks to its exotic mammoth ivory dial, the new HYT Skull Vida watch is easily one of the more interesting watches in the HYT Skull line-up. It is also one of the most controversial ones too, as the trade of ivory is a highly contentious subject, even more so from a rare and extinct animal. Nevertheless, HYT must be commended for its design, daring, and bravado. Because of the rarity of mammoth ivory, the Skull Vida will be HYT’s most exclusive watch yet, with just 5 pieces being made. The HYT Skull Vida is priced at $95,000. hytwatches.com