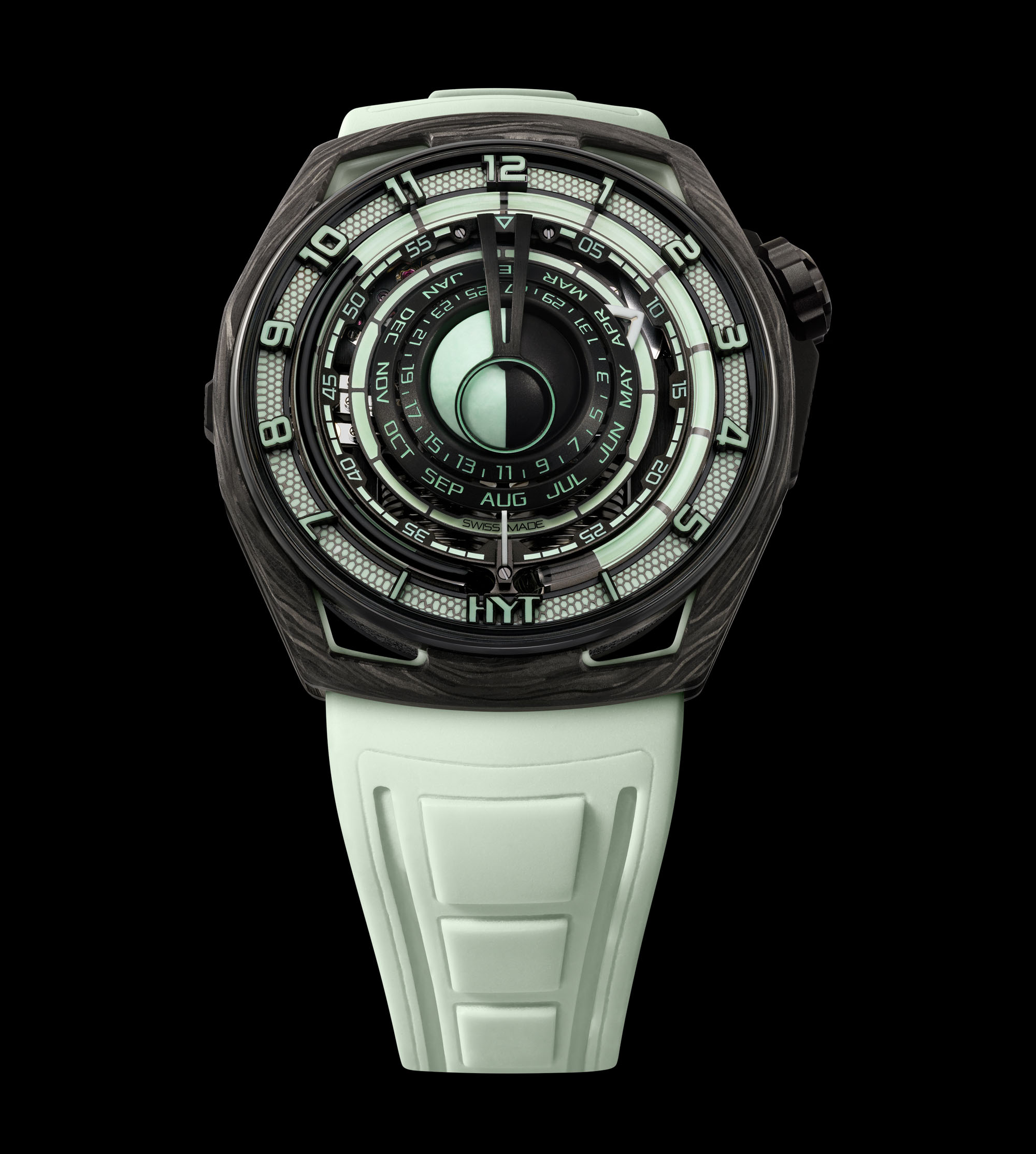 Humans seem to have an inherent fascination with things that glow in the dark. As children, we chase fireflies and stick cheap plastic stars on our walls. However, as we become adults, our love of glowing objects must manifest itself in different ways, and nowhere is this more apparent than in certain watches. HYT seems to recognize this, and to celebrate the company’s 10th anniversary, the independent Swiss watchmaker has unveiled the new Moon Runner White Neon H02800-A, which takes the brand’s existing moonphase model and turns the lume level up to 11 in order to offer an appearance that is just as striking in the dark as it is during the day. 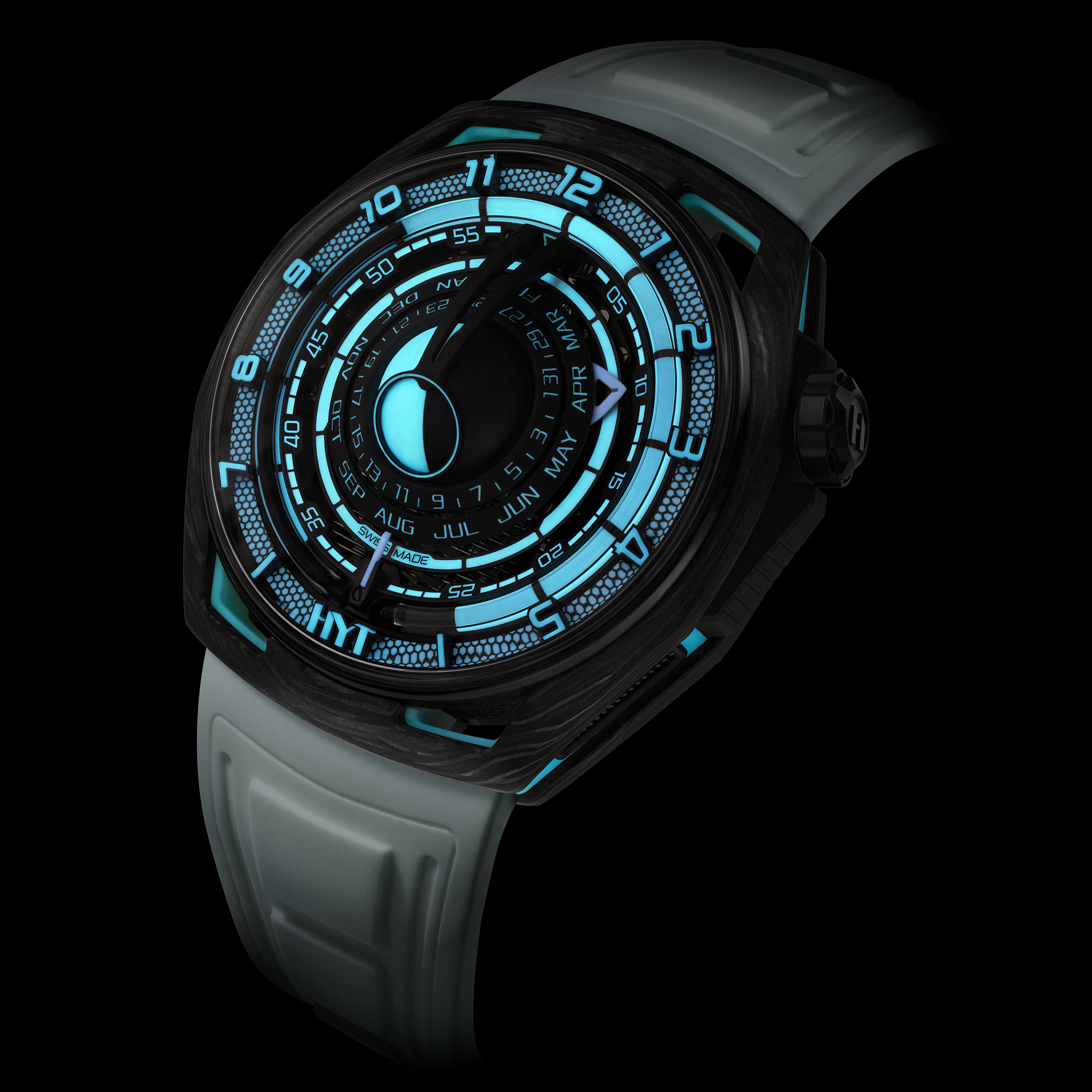 The 48mm case of the HYT Moon Runner Neon White will be instantly familiar to those who remember the original Moon Runner model that debuted at Watches & Wonders 2022. However, while the case of the inaugural version was crafted from titanium, the new HYT Moon Runner Neon White features its 64-component case constructed from Hydro Carbon (a type of carbon composite) and Tec Light, a highly luminescent hybrid ceramic material. The case itself follows a sandwich-style construction, with the upper and lower parts built from Hydro Carbon, while Tec Light is used for the middle part of the case and offers a brightly glowing blue appearance. The black titanium winding crown is located on the side of the case between 2 and 3 o’clock, and it is protected by angular, asymmetric crown-guards that stick out from the side of the case. A display caseback covers the movement side of the watch, while a heavily domed sapphire crystal surrounds the three-dimensional dial and creates a bubble-like appearance. 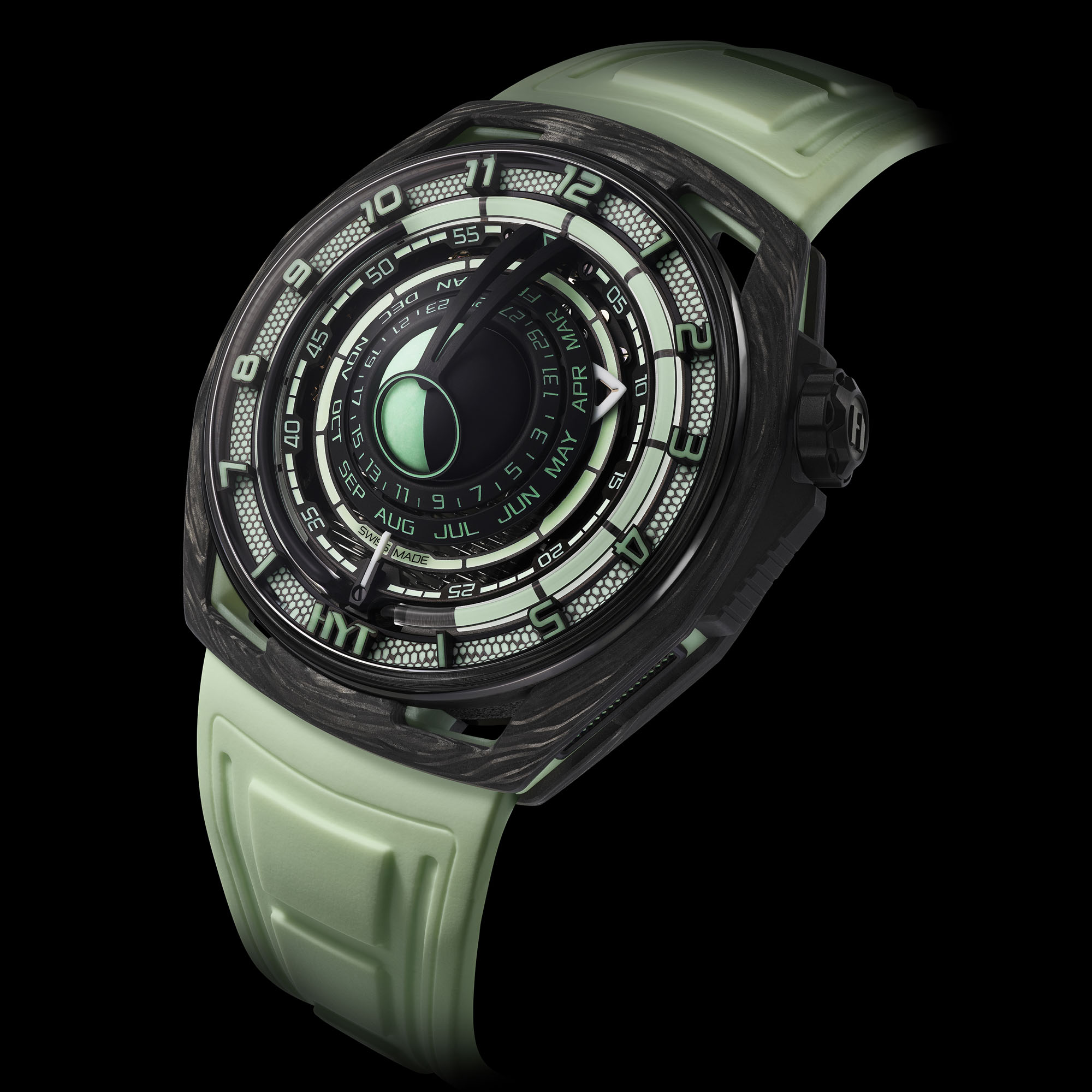 The “dial” of the HYT Moon Runner Neon White is not so much a traditional dial as it is a 58-component multi-layered structure that offers a dynamic and high-tech appearance. Sitting front and center is a spherical moonphase surrounded by conical discs that display both the month and numerical date. Continuing to move outward, there is a satellite minute hand that indicates the time against a separate fixed scale, and all of that is then surrounded by HYT’s signature liquid-filled borosilicate glass capillary tube, which is filled with black liquid and indicates the hours in a retrograde display against a grid-like hour track with applied markers sitting on top of it. When it comes to lume, virtually everything on the watch that is not black in color will glow a harmonious bright blue color in the dark, meaning that all of its various dial markings receive a healthy dose of the latest generation of Super-LumiNova. 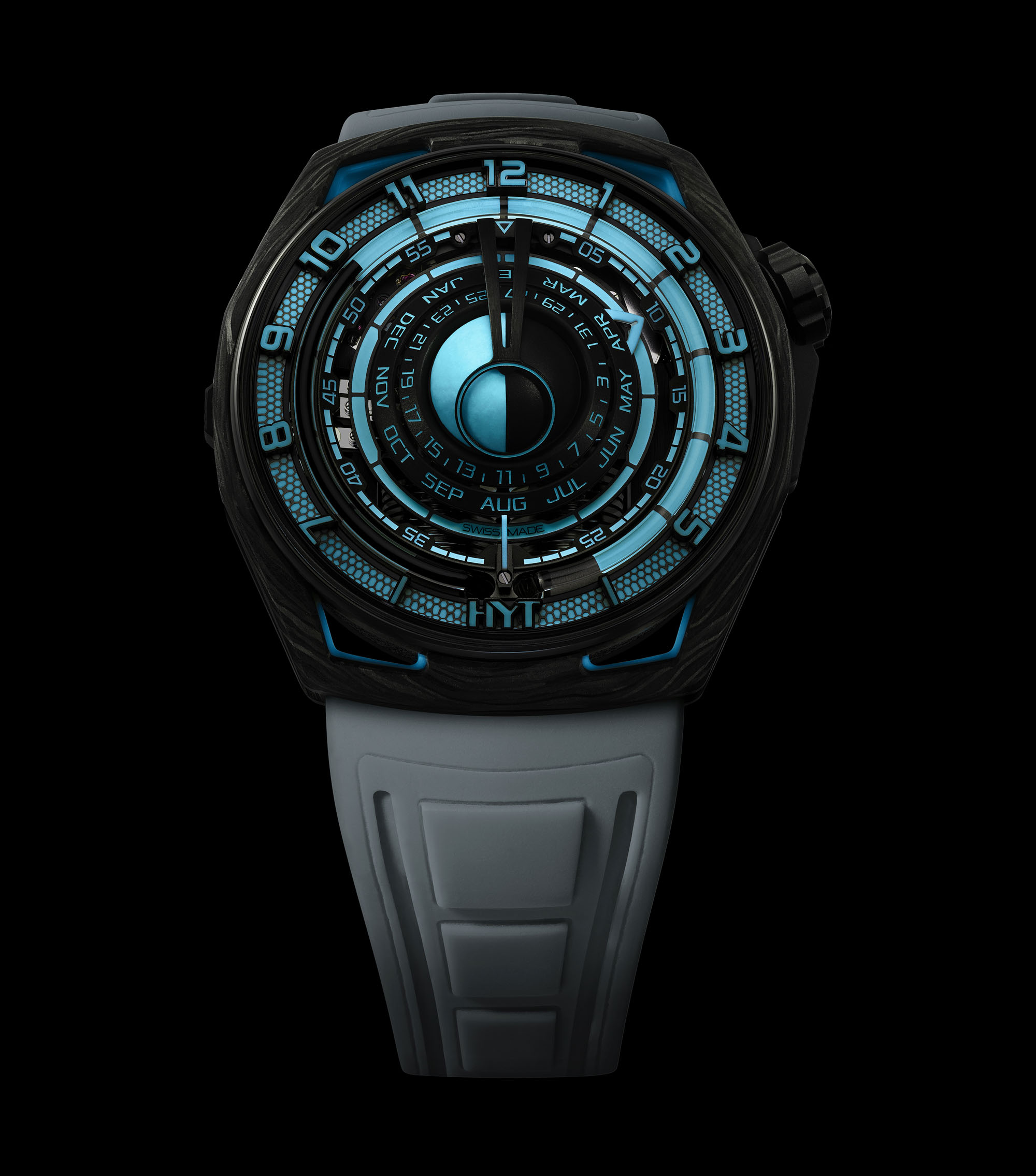 Powering the HYT Moon Runner Neon White is the same Caliber 601-MO that can be found inside the original version of the watch, which consists of 516 components and features a retrograde display for the hours that is indicated by the level of colored liquid that fills a thin hollow glass tube. Controlled by a tiny set of bellows that are connected to the fully mechanical movement within, this highly unique approach to displaying the time is HYT’s signature feature and it has defined the brand’s various works since the very earliest days of the company. Despite its unconventional display and use of tiny bellows for controlling fluid pressure, the HYT Caliber 601-MO is an entirely mechanical creation that is manually wound, runs at a frequency of 28,800vph, and offers users a 72-hour power reserve. 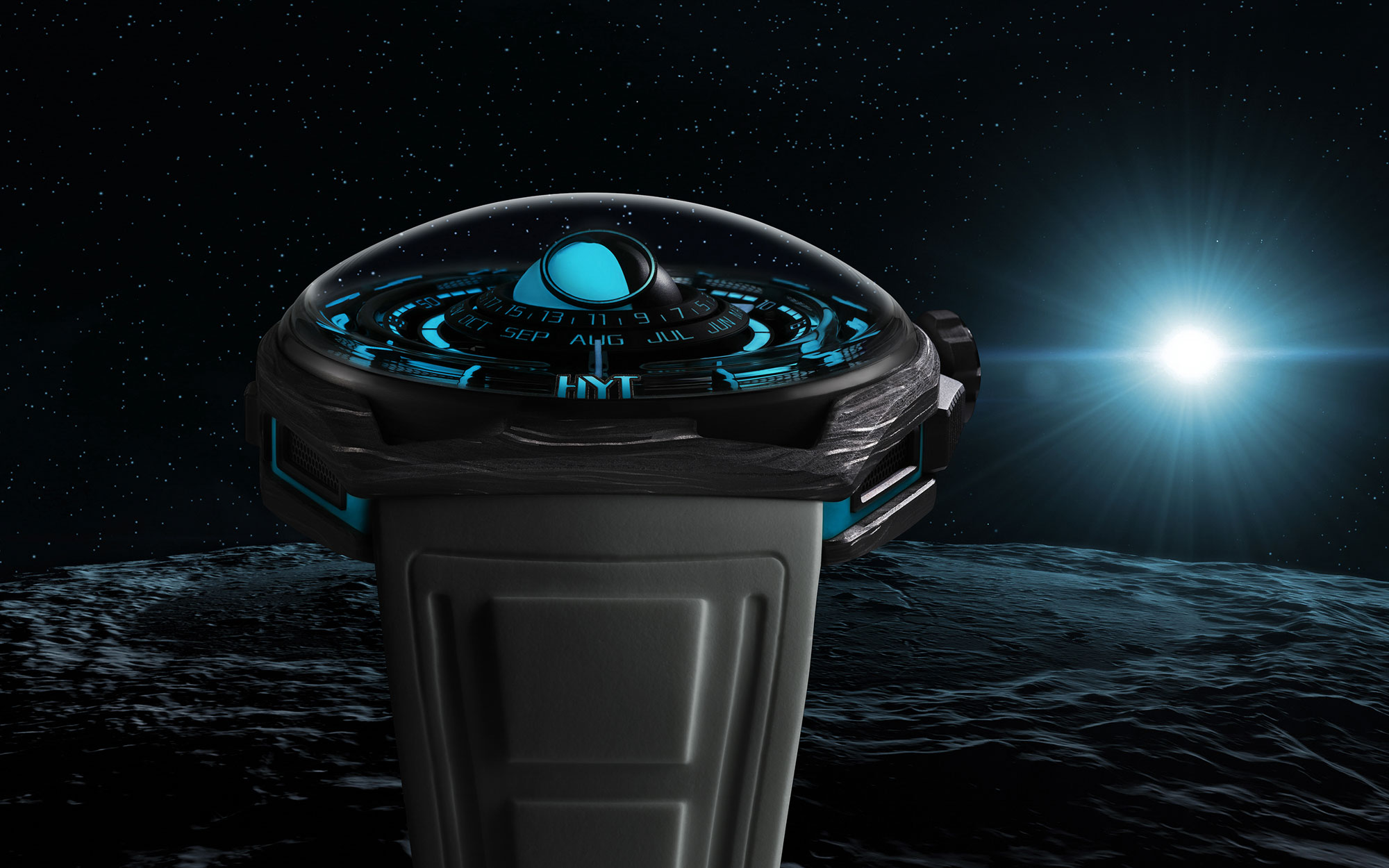 While HYT was forced to temporarily close its doors for a year due to financial-related issues exacerbated by the pandemic, the cult-favorite independent brand has been back with a vengeance since it re-emerged in 2021, now under the creative control of watch industry veteran Davide Cerrato, who has a history of success working with high-profile brands such as Montblanc and Tudor. As a celebration of HYT’s 10th anniversary, the HYT Moon Runner Neon White will be produced as a limited edition of just 10 pieces, and it will be accompanied by an official retail price of CHF 130,000. The new model will be available exclusively on HYT’s online sales site for a limited time between July 15 and August 1, 2022. For more information, please visit the manufacturer’s website.