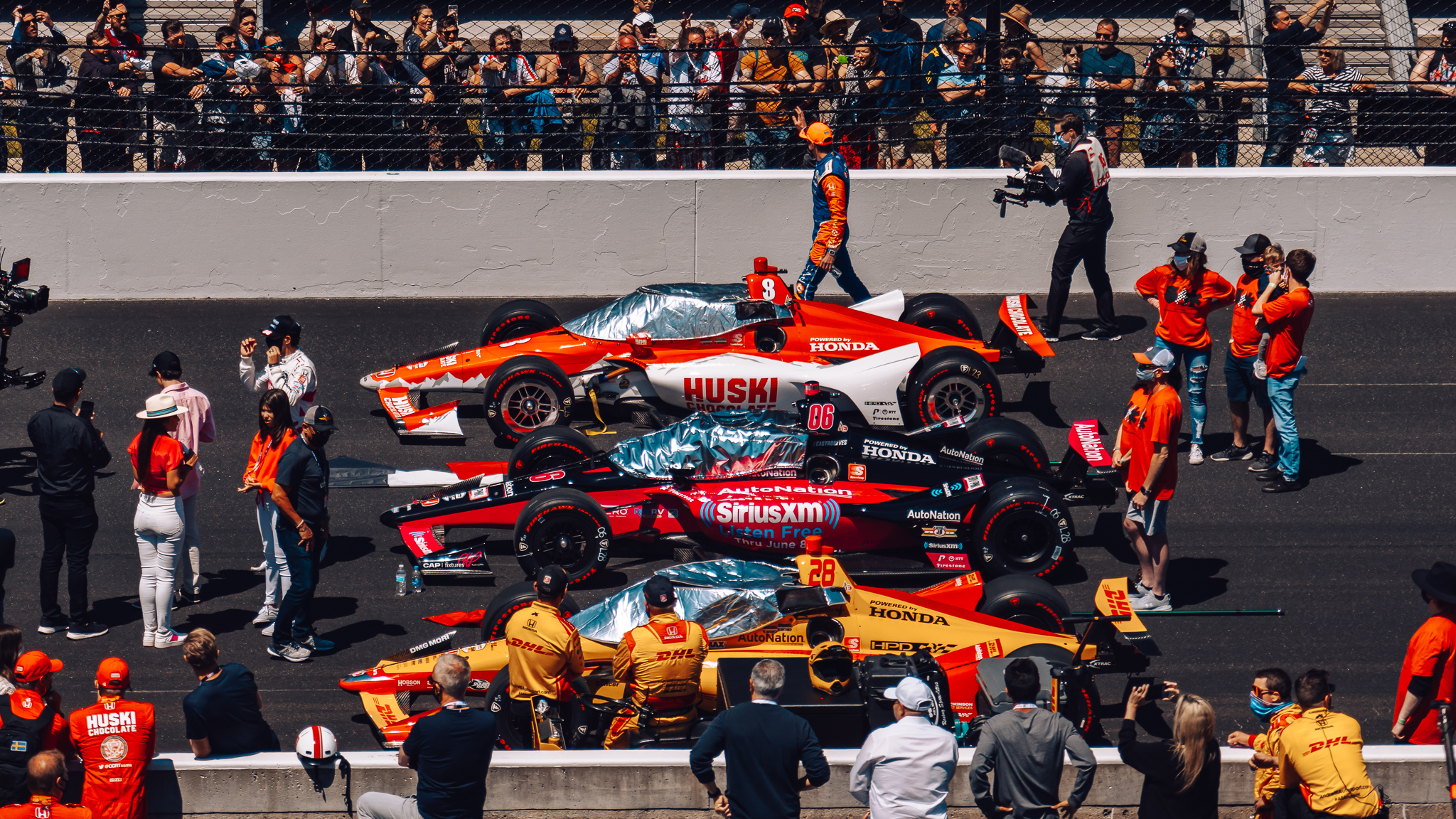 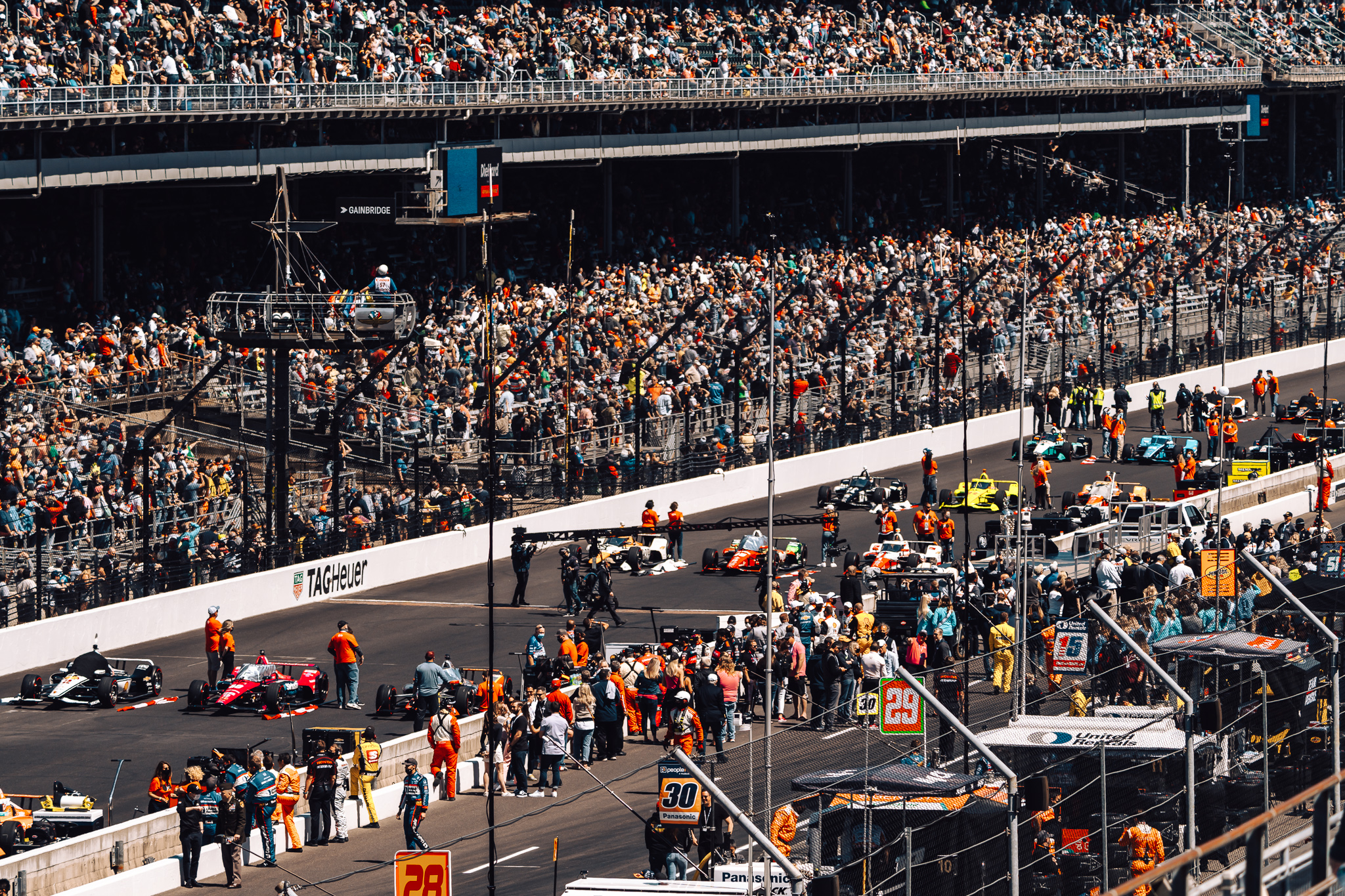 For a first-time attendee, it’s difficult to imagine what the Indy 500 might have looked like in all the years before 2020 — after all, what we remember about life from before the pandemic has never felt more distant. But I’ve been told about the traditional Sunday morning race day traffic rendering every street in a five-mile radius of the track to complete gridlock, about the sweaty and sunburnt sea of humanity spread across the famous “Snakepit” infield, and of the screaming throngs crammed shoulder-to-shoulder in the open-air grandstands, craning their necks as the racers exit Turn 4 and charge toward the checkered flag. The Indianapolis 500 is unequivocally the biggest day in motorsport, and, in its peak years, routinely attracted upwards of 300,000 racing fans to its rowdy midwest epicenter: the Indianapolis Motor Speedway. But that was then. Things are different now. 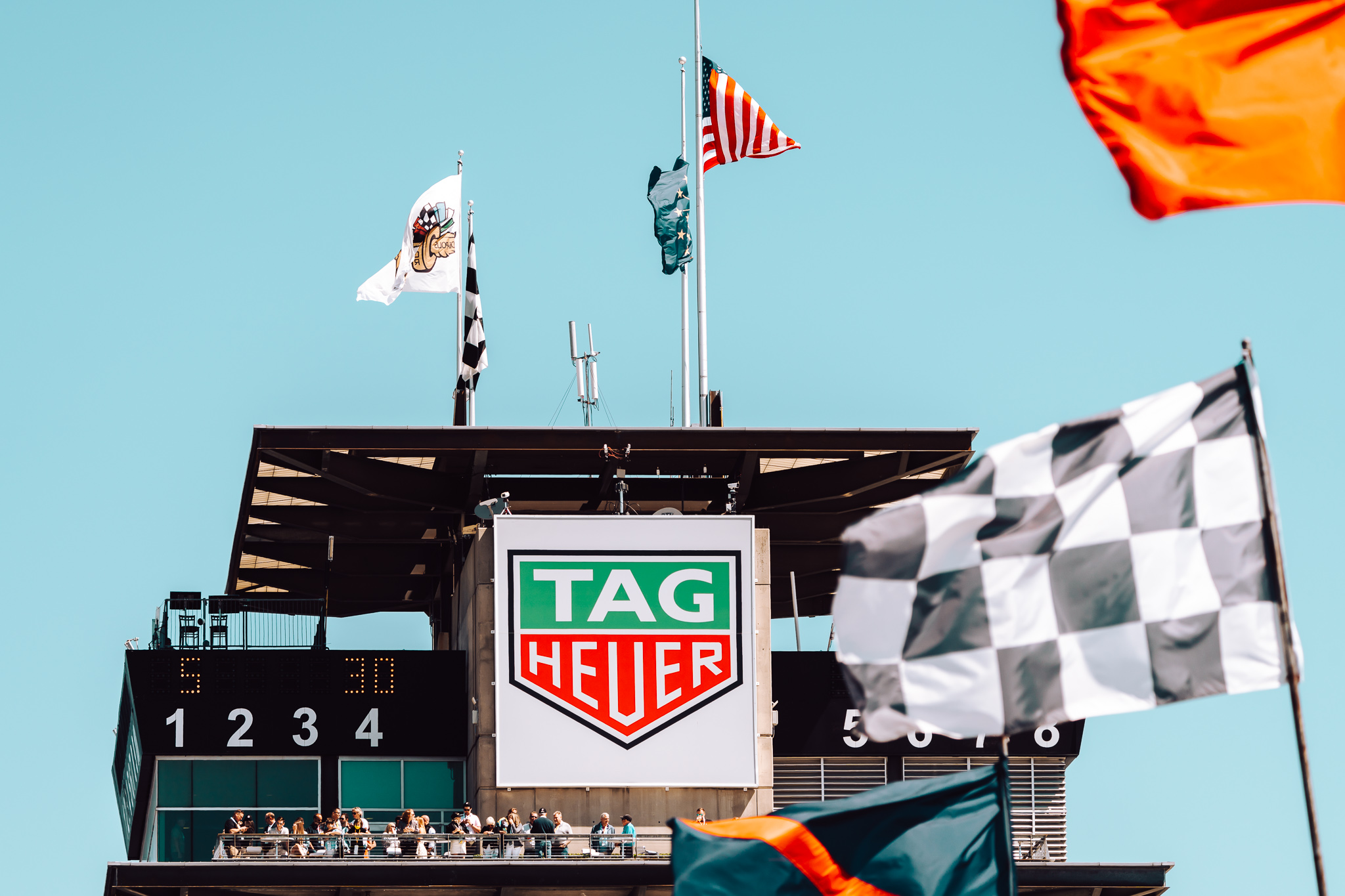 Even still, the show did go on — unlike the 2020 Indy 500 which was held in August without fans, this year’s 105th edition was held on time in its traditional slot over Memorial Day weekend but at 40% capacity. Funny thing about that figure, though, is that 40% of 300,000 fans is still bigger than Lemans, bigger than Silverstone, and bigger than the famed “Temple of Speed” at Monza – three other beloved stops on motorsport’s racing calendar. So, stepping out onto the bleachers beneath the iconic “Pagoda” which bore an oversized TAG Heuer chevron, and surveying this bustling, colorful alien world after a year of quiet solo adventures came with no small amount of culture shock. But justifiably so, as with 135,000 in attendance, this edition of the Indianapolis 500 would bear the unique distinction of being the largest sports gathering in the world since the pandemic began in the Spring of 2020. 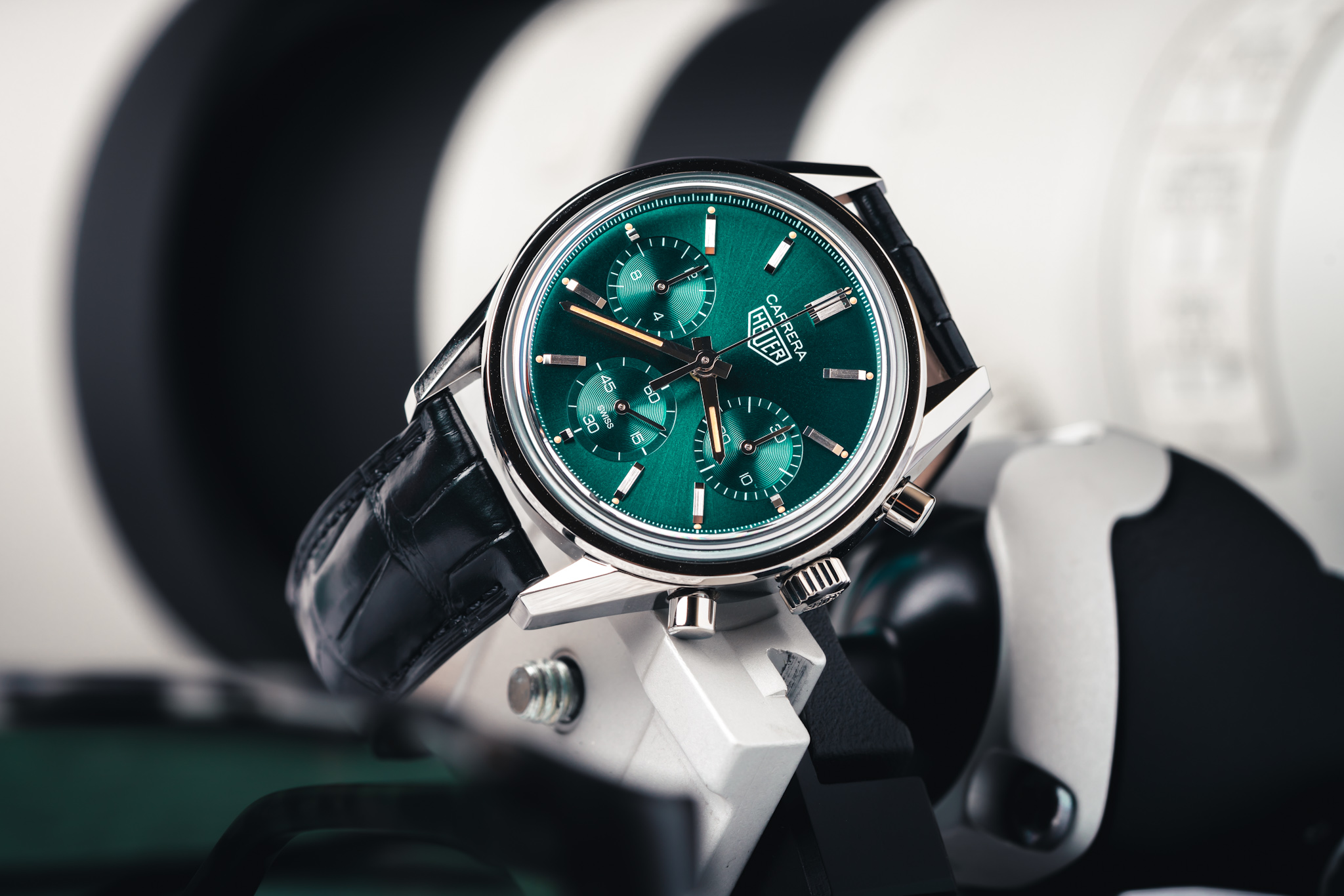 TAG Heuer is on a tear this year — following the footprint of many of the brand’s contemporaries with limited editions in nearly every category, but unlike what we’d grown accustomed to in years past, the brand is eschewing modern bombast and instead embracing its heritage and churning out hit after hit, reflecting a newfound confidence in its own skin, and the prospects of an exciting new future. Joining me at the race are the brand’s two most recent releases: a cheerful, emerald-dialed Carrera rumored to have already sold out, and an ultralight, all-matte titanium Monaco, which seem to particularly embody this confident return to form. 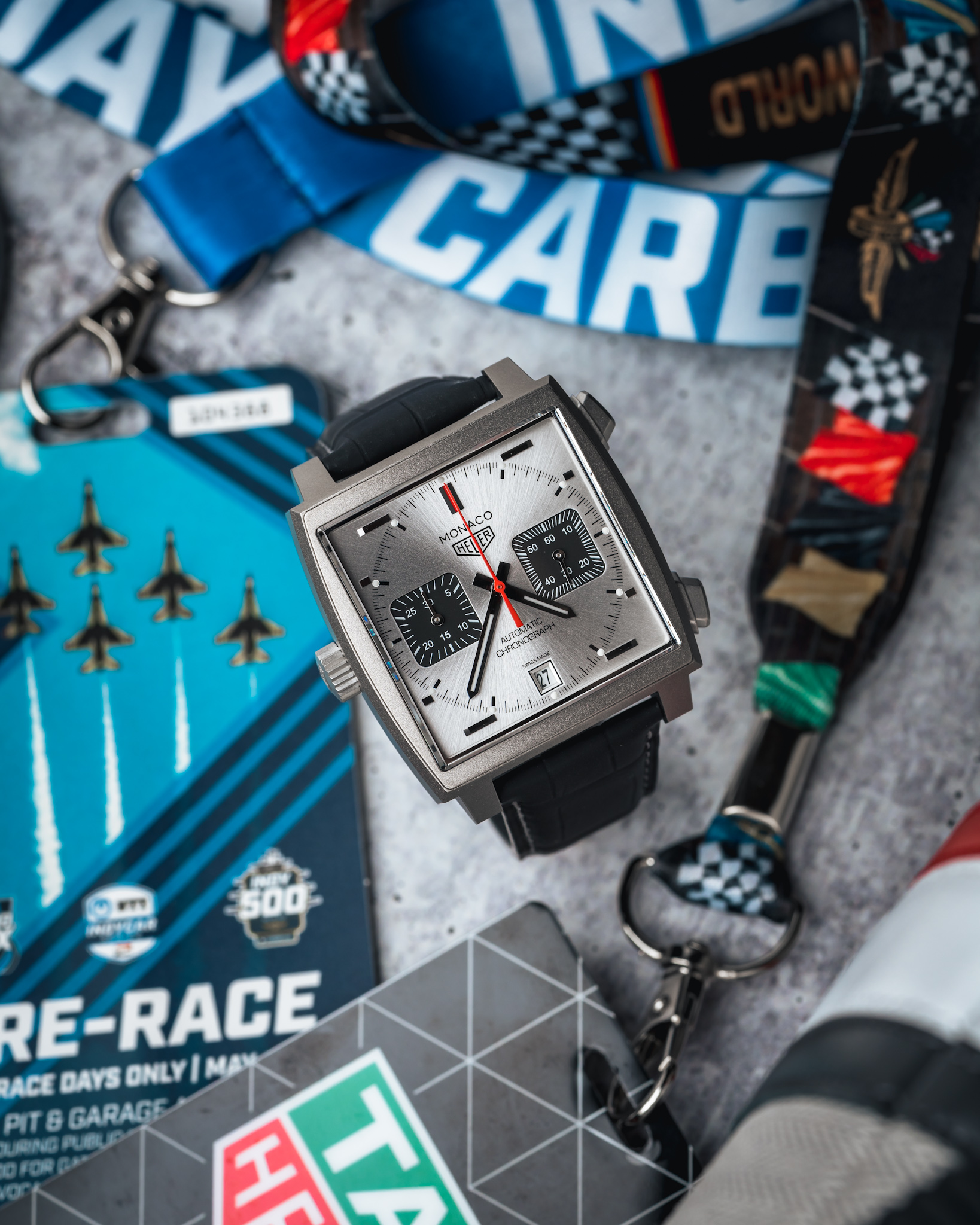 I’m particularly taken by the latter though — a watch that feels like an entirely new interpretation of the Monaco, which has traditionally been rendered in high-polish cases beset with brighter motorsport-inspired livery. Conversely, it’s the most sober expression of the classic racing chronograph that I’ve ever seen, but one that works extremely well to specifically pinpoint the case’s highly distinctive architecture – namely its tall slab sides, angled pushers, and dramatic beveled square crystal. 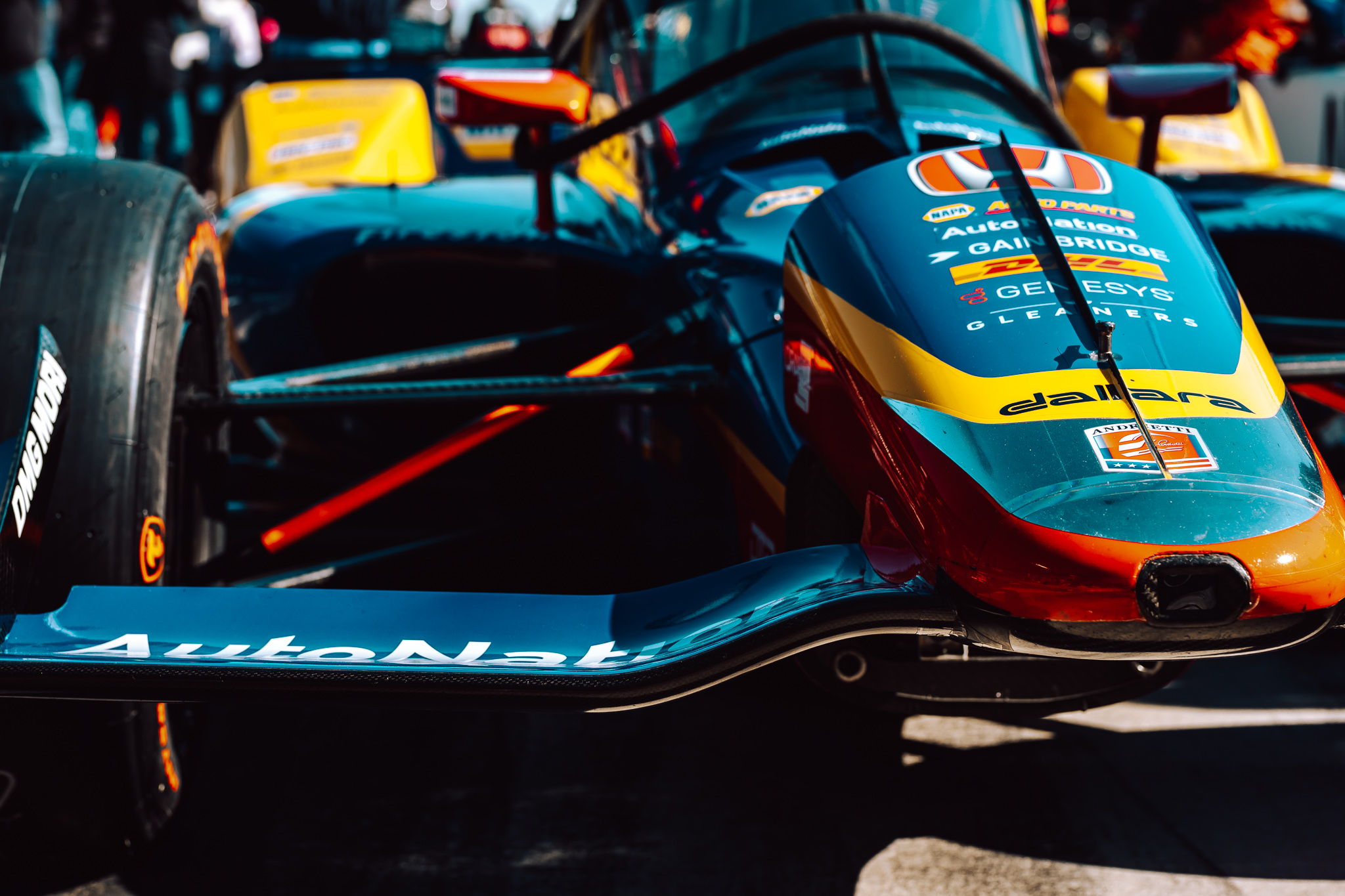 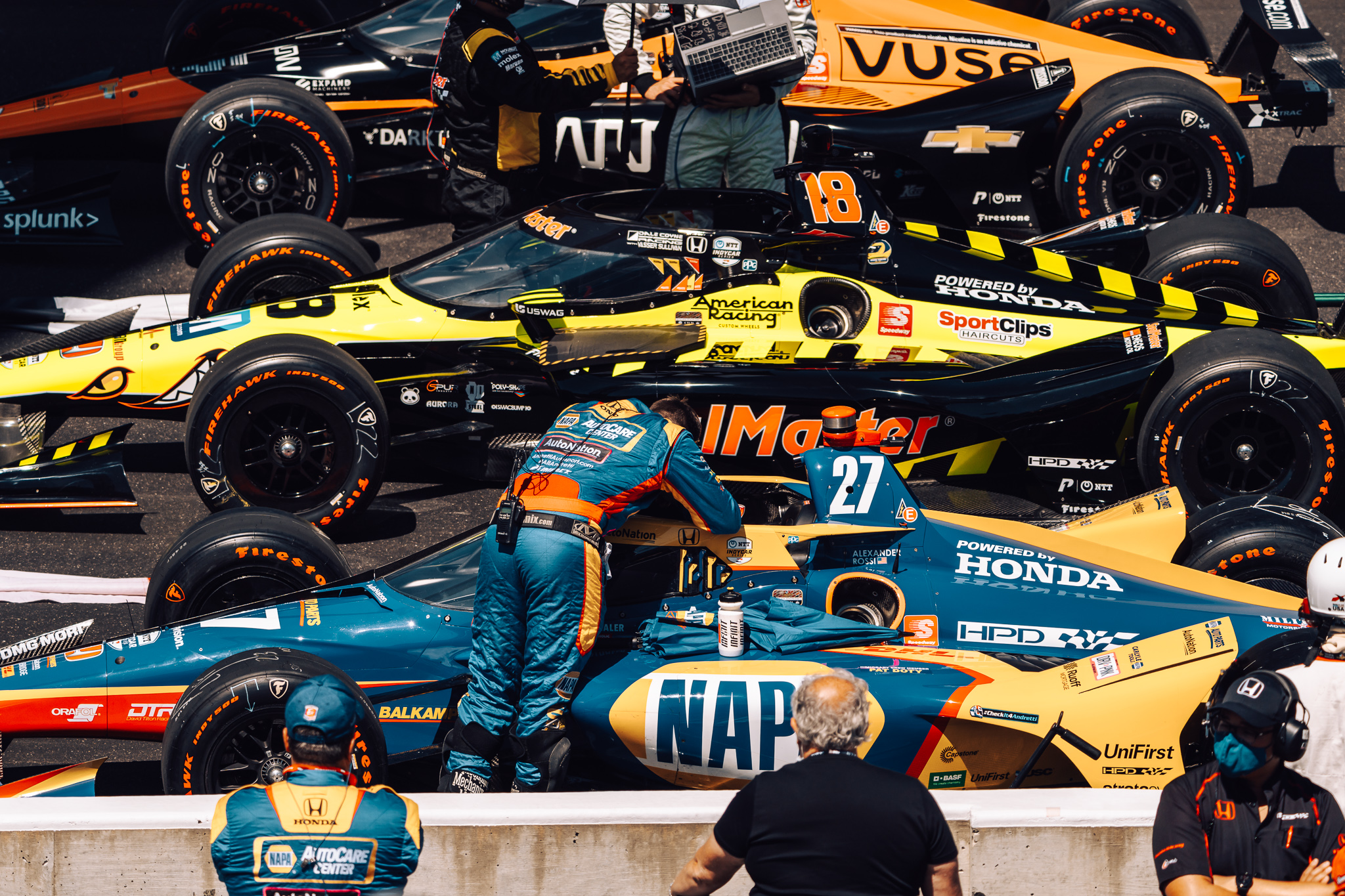 Down on the track level where the pits are abuzz with the hurried atmosphere of pre-race preparation, our eyes were focused on the two cars driven by TAG Heuer ambassadors: the number 27 Napa Auto Parts car belonging to California-born Alexander Rossi, and number 16 driven by Swiss native Simona de Silvestro, who also happened to be the race’s sole woman driver. It’s here, up close, that some of the key physical differences between these IndyCars and their Formula 1 cousins become much more apparent — most specifically, the design homogeny. IndyCar is generally acknowledged as having a more level playing field, with each team relegated to using the same chassis and engine from either Honda or Chevrolet. And despite IndyCar’s faster straight-line speeds, Formula 1 is recognized as more of an engineer’s game, with dramatically bigger budgets and a much broader focus on design and development, as each team is essentially tasked with developing its own car and many of its proprietary parts. 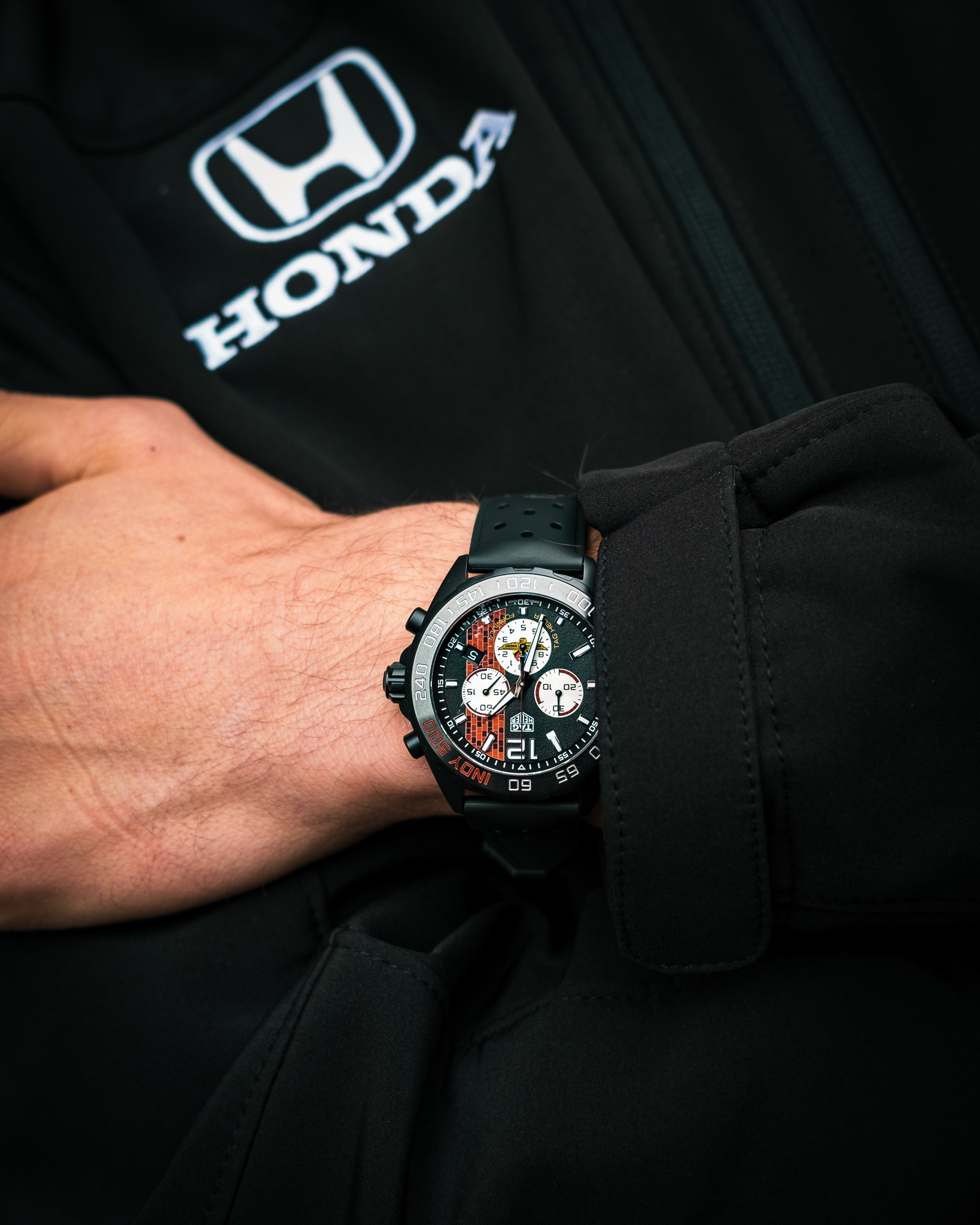 After all the pomp and circumstance of Indy 500’s many traditions, both of TAG Heuer’s sponsored drivers would each ultimately encounter a bit of bad luck over the course of the race’s 500 laps, keeping them away from contention at the pointed end, but sometimes that’s just how racing goes. Even still, it did little to diminish what amounted to an otherwise thrilling race that came down to some cat-and-mouse tactics on the final lap, with IndyCar veteran Hélio Castroneves edging out the youngster Alex Palou and taking his fourth career Indy 500 win. 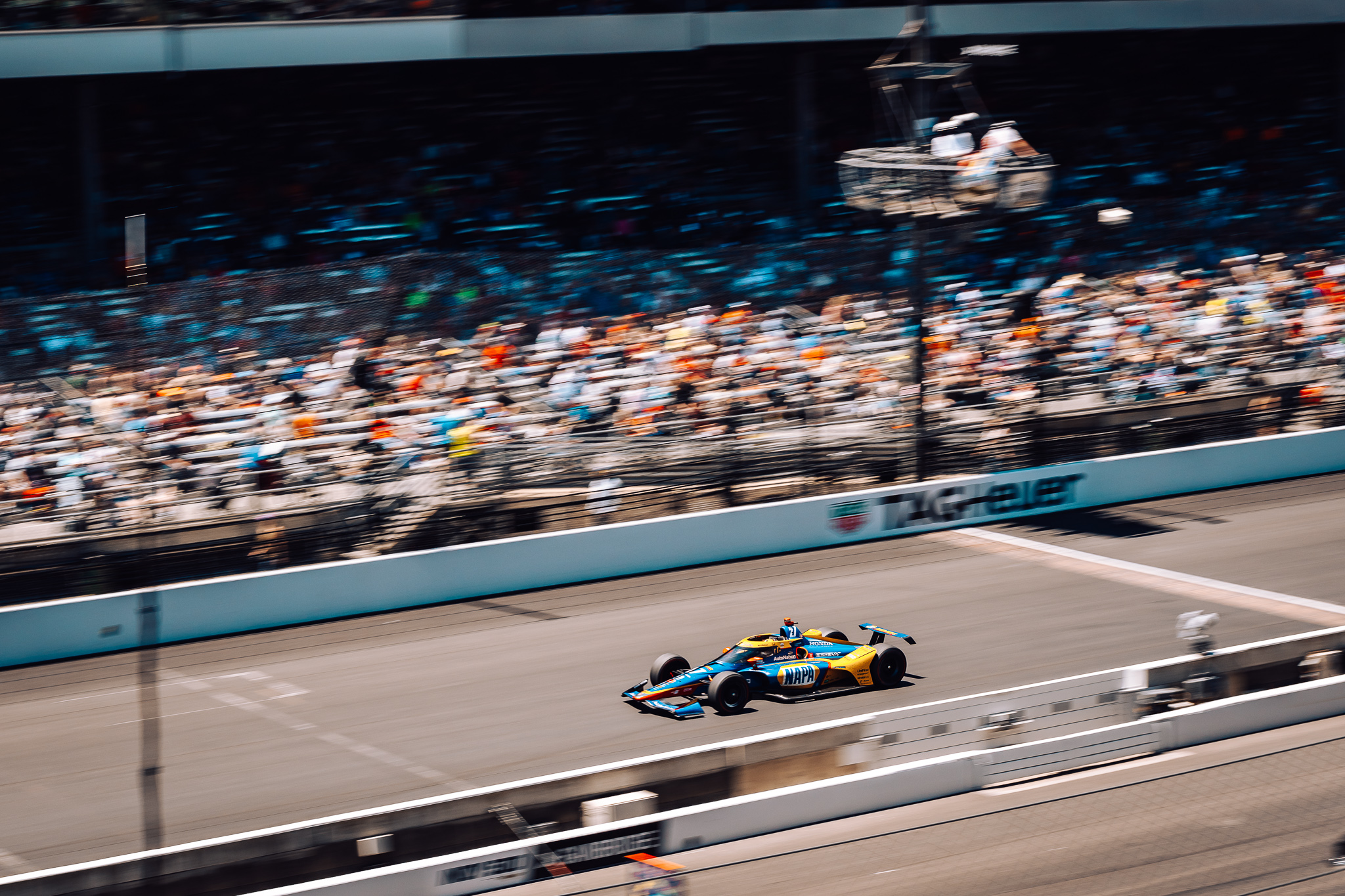 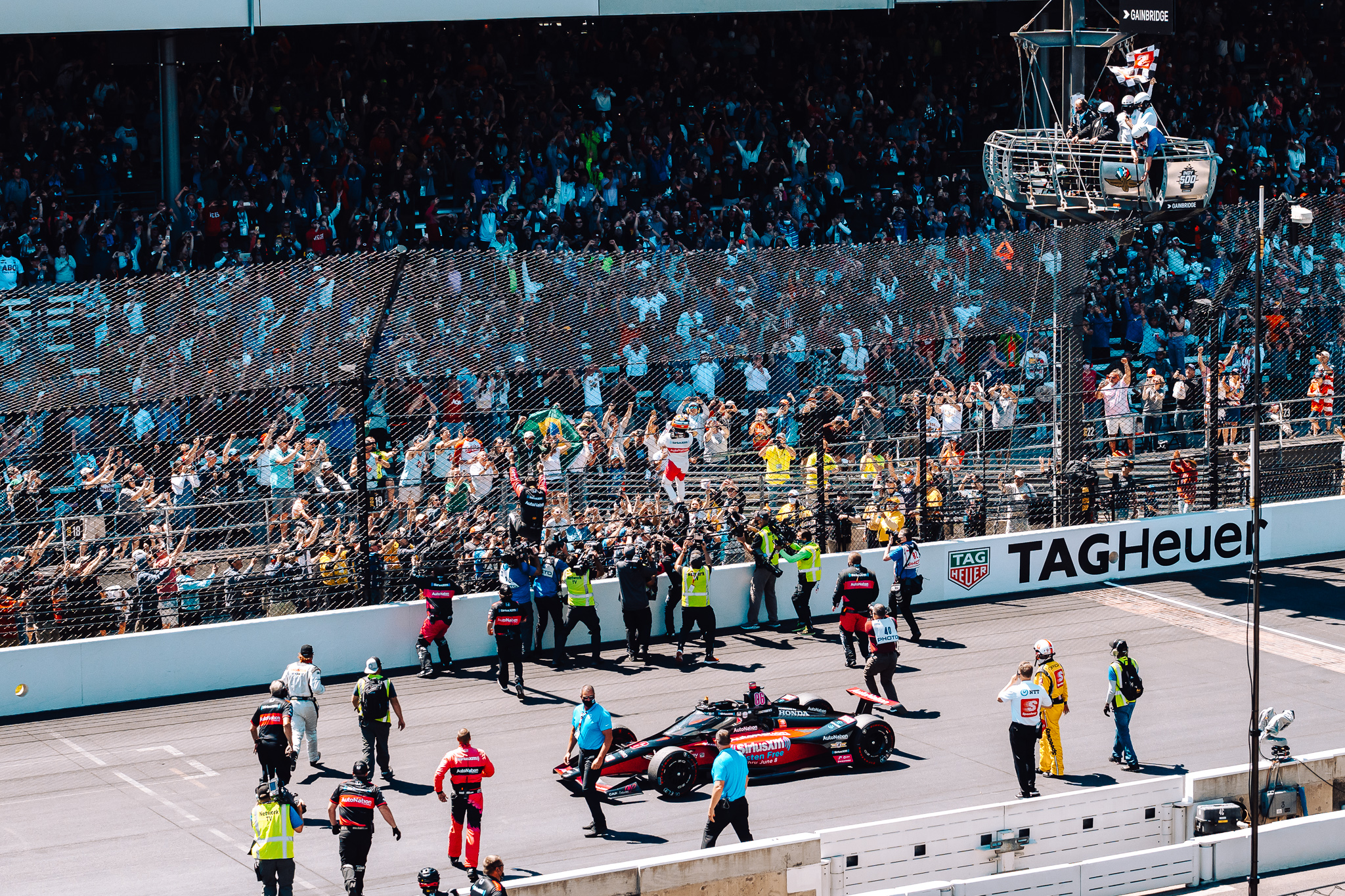 It’s great to see TAG Heuer make more of a concerted return to motorsport — an arena with a long history of capturing the imagination of soon-to-be watch fans the world over. To be fair, the brand never really left — it just seems to have fewer competing distractions from within its own design and marketing departments, enabling the brand to enjoy a renewed sense of purpose and vigor in the space. It also doesn’t hurt that the Red Bull F1 Racing team sponsored by TAG Heuer is on a hot streak at the moment with its star driver Max Verstappen fresh off a Monaco win and leading the F1 point standings. To many watch fans, myself included, TAG Heuer may have always been an avant-garde watchmaker, but that edginess never came at the expense of practicality, capability, and a certain sense of perennial classicism in motorsport, with the kinds of watches one could have interchangeably seen at the Indy 500 decades ago, or many decades into the future. The modern collection seems to express this more fluid design ethos in spades, and that should finally come as very good news to anyone who’s been following the brand for the last few years. 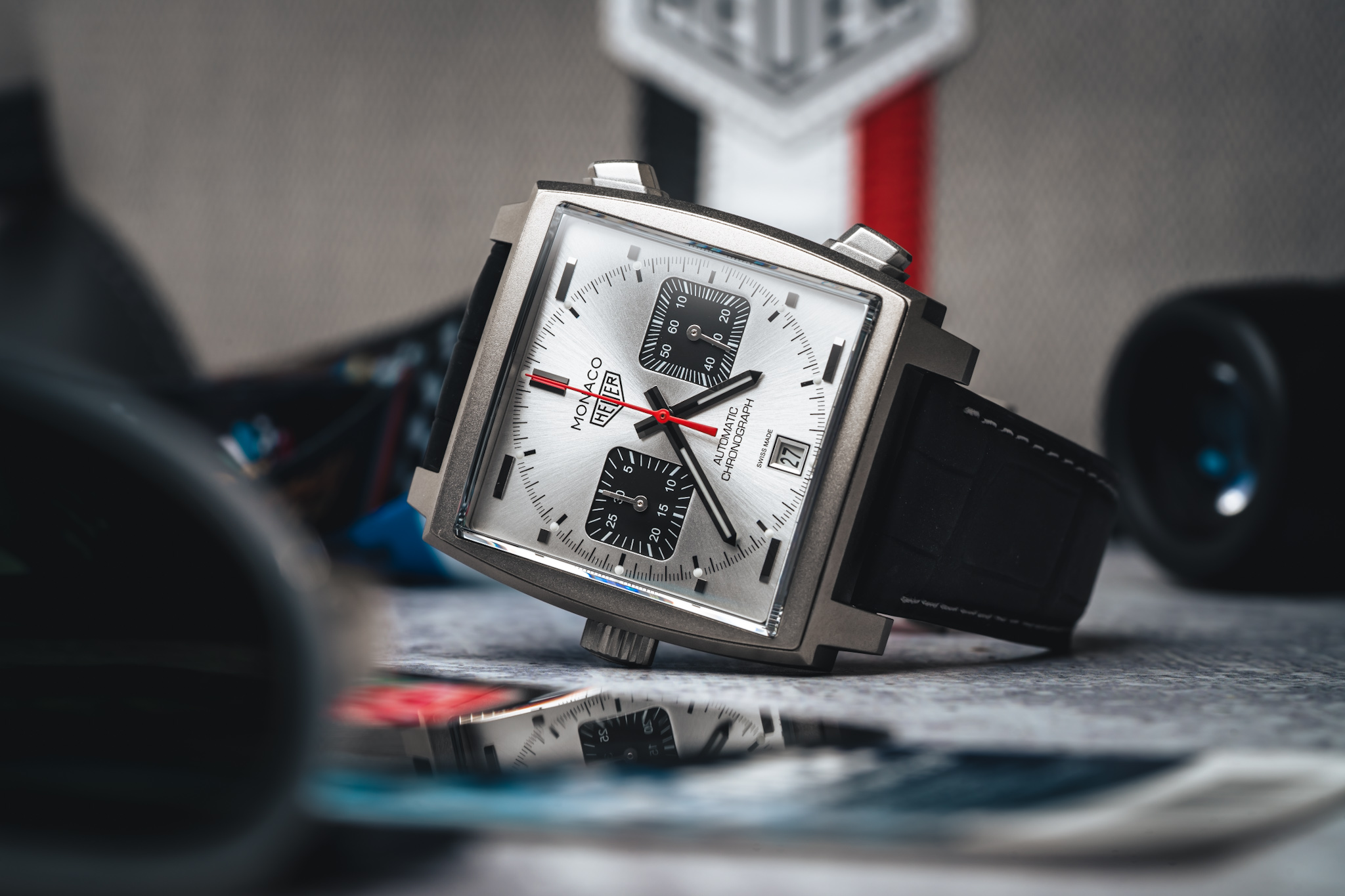 Pricing for each of the two limited-edition TAG Heuer references is as follows: $6,650 for the 39mm green-dialed Carrera, and $7,900 for the titanium-cased Monaco Chronograph. You can learn more about these limited editions, along with the rest of TAG Heuer’s motorsport-inspired watches, at tagheuer.com. 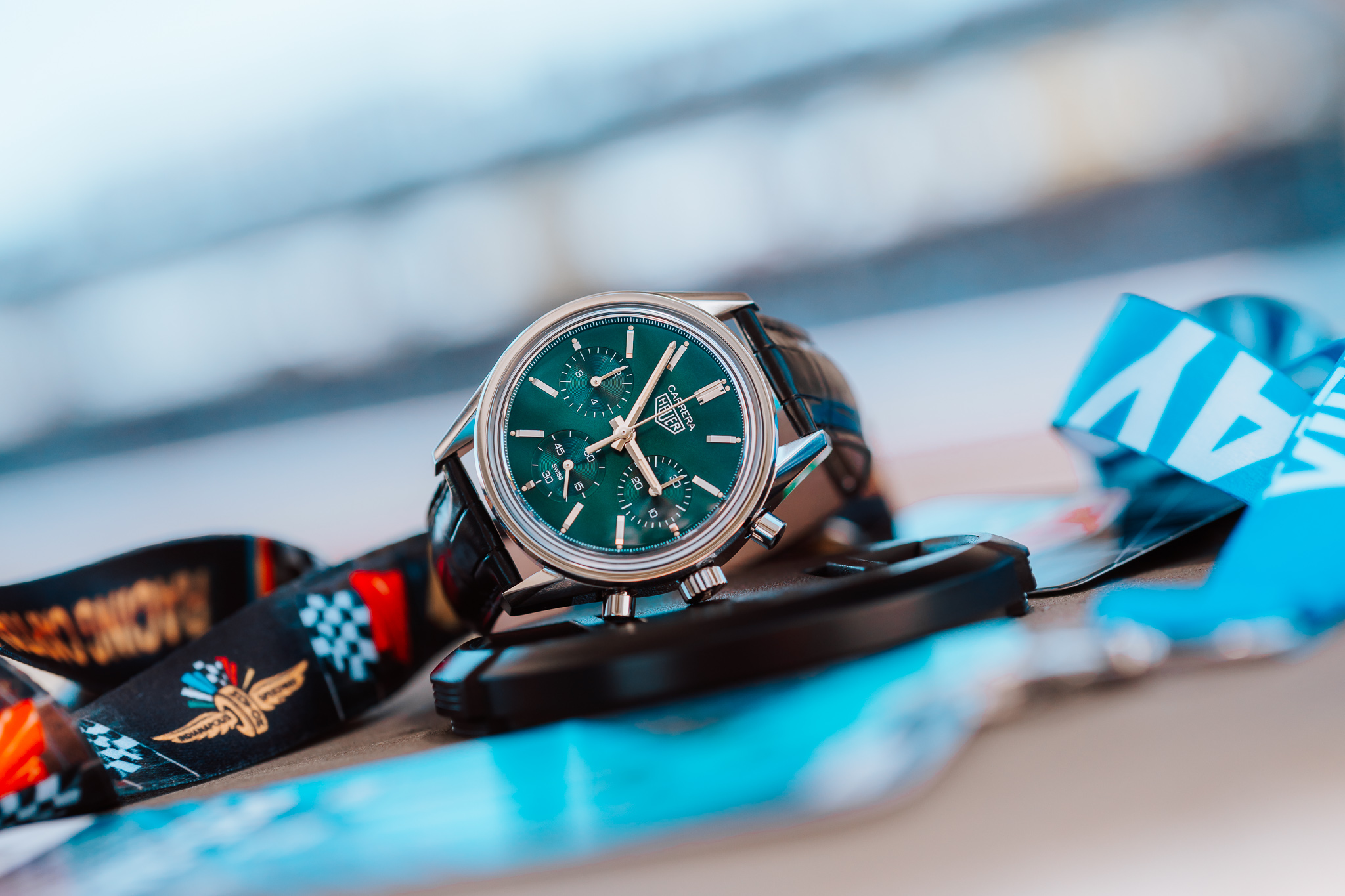