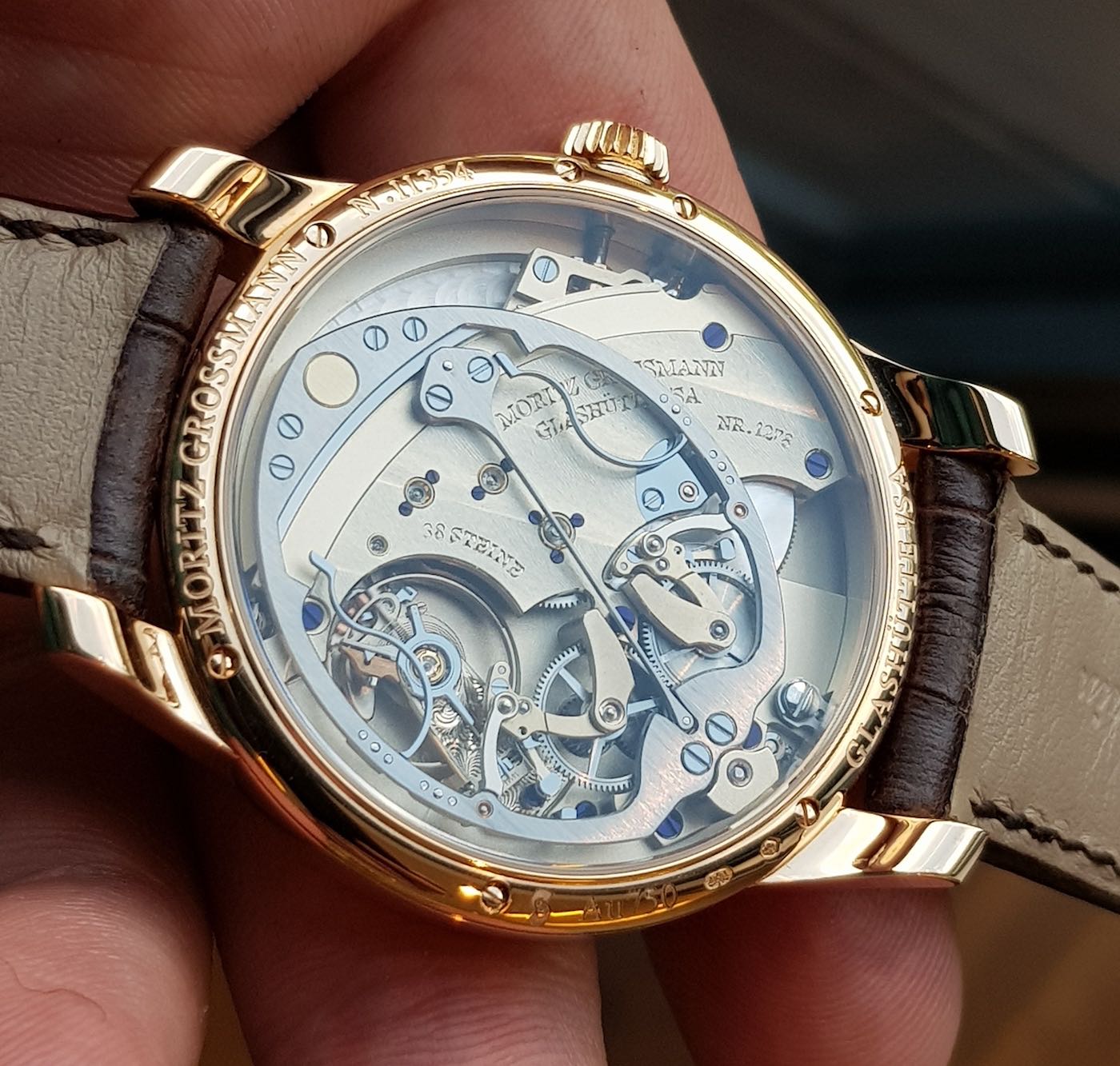 Inside The Manufacture: A Visit To Moritz Grossmann I was caught in the early morning foot traffic as I made my way to Dresden Neustadt train station to begin my journey back to the town that felt like a second home for three years. The busyness of the city was in stark contrast to the tranquillity I knew awaited me as I traveled closer to the home of German watchmaking. Glashütte is a tiny town, nestled in the Ore Mountains just 12 miles from the Czech border. Its association with watchmaking stretches back to the middle of the 1800s when, in 1845, Ferdinand-Adolph Lange secured backing to open his own manufacture, specializing in pocket watches. While the history of Lange himself and his company is well documented, less is known about the men that stood by his side in the early days of German watchmaking, but a modern company bearing the name of Moritz Grossmann — himself a Glashütte legend — is doing its best to change that. The train pulled into Glashütte on time (unsurprisingly). As the station is the end of the line, every passenger alighted. Half disseminated around the town en route to their various places of work (there are more than 10 watchmaking companies still active in Glashütte) while the rest crossed the platform and boarded another train for Altenburg, a popular destination for walkers and Winter Sports fanatics. With time to spare before my meeting with Christine Hutter, CEO of Moritz Grossmann, I climbed the hill behind the massive Grossman Manufacture to sit in the shadow of the Wempe Observatory, where German timepieces are put through their paces in an attempt to earn chronometer status. The view from the observatory belies the industry of the seemingly sleepy town. In the far distance, the sounds of the Autobahn heading north to Berlin and south to Prague drifted through the valley that time, for all its presence here, seems to have forgotten. Now, close to 30 years since reunification and the rebirth of high-end watchmaking in this area, it seems hard to imagine how close this charming enclave of horological history came to extinction. The money and prestige that watchmaking’s renaissance has brought to the area have seen the town regenerate. While there is nothing in the way of nightlife to speak of, several small bakeries and cafes open throughout the day to feed and water the watchmakers, as they quietly go about their business. As the only manufacture located on the “other side” of the train tracks, Moritz Grossmann can not help but stand out. Its towering headquarters looms over the ancient town like an avant-garde spaceship that crash-landed by accident and decided to stay. It is, without a shadow of a doubt, a physical expression of the brand’s ambition. And given its CEO’s background, it is not hard to see why she feels it’s justified. Officially founded in 2008, the naming rights to the company were acquired a year earlier in 2007. This was, of course, during the global financial crisis that would eventually hit the watchmaking industry a few years later. I always wondered how being born in such stormy market conditions affected the path Moritz Grossmann has traveled in its first decade of existence, assuming that the decision to trade at such an exclusive price point had something to do with the kind of customers who were not so troubled by the crashing stock-markets the world over. But since then, the watchmaking industry has changed. While appealing to the super-rich is still a valid strategy, ensuring potential purchasers are aware of a brand and its provenance has never been more important. Reputation and heritage cannot be synthesized. Even the smartest, most astute PR team needs time to sew the seeds of trust in the minds of consumers. And although there is no shortage of money desperate to leap from customers’ pockets, most of it seems to be being channeled towards “investment” pieces. For a watch to be considered an “investment” (which is always a tricky moniker to live up to) the presence of an established brand name on the dial is often essential. Establishing a new name without a wide retail network, visible brand ambassadors, and an events budget that at least matches (or preferably exceeds) those of one’s competitors is no mean feat. To find out what Moritz Grossmann is doing to ensure its future in a congested arena, I sat down with CEO Christine Hutter and Head of Communications Sandra Behrens, who kindly invited me to tour the manufacture and to ask whatever came to mind. The first thing that strikes you when you enter the Moritz Grossmann facility is its potential. While parts of it are fully operational, there are spaces already marked for future renovation. There’s a funny sense of the calm before the storm about proceedings. It is as if the many teams, furiously beavering away in silence, are conscious of and waiting for a sudden explosion. But as we know in watchmaking, suddenness is rare. In truth, the management is attempting to oversee a controlled explosion that will occur within the company’s capacity so the current operation is not irrevocably destabilized in the process. Moritz Grossman exists in one of those special watchmaking bubbles only independent brands can cultivate for themselves. The overall feel of the company is of one much smaller than it actually is, with an extreme level of care taken over the creation of each component, most of which are made on-site. As an independent company, Moritz Grossman is also able to react to individual customer desires, and, even now, consider bespoke commissions on their individual merit when requested. The emphasis is clear: quality, quality, quality. The factory is operating well within its projected capacity. Currently, Moritz Grossman produces under 500 timepieces each year, but the plan, according to Hutter, is to increase this steadily to somewhere between an optimal output of 800-1,000 per annum. The timeframe? Around five years. The strategy? To drive attention towards an increasingly well-defined core collection with the headline-grabbing release of disruptive (and oftentimes unexpected) special editions. With several off-the-wall limited and unique pieces over the past 12 months (such as the Super Bowl watch, the Trump meets Kim watch (which wasn’t intended to send a political message of any kind, only to mark a moment in history), and a timepiece celebrating the Women’s World Cup) released alongside perhaps the finest entrants in the brand’s core collection to date, I wanted to know exactly why Moritz Grossmann thinks that it is necessary to release such off-brand pieces. In contrary to the common mantra “build it and they will come” the consumer base for Moritz Grossmann’s more unusual special editions is actually the driving force for their creation. At this time, at this size, the brand is still able to satisfy consumer demand by following the opposite path: “They have come, so build it we shall”. Hutter is adamant that part of the brand’s current appeal is that it is willing and able to respond to direct customer or regional market demand. Rather than worrying that such eccentric and esoteric releases will dilute the brand message, she is confident they will instead draw people to the brand and encourage them to explore what else it has to offer. Intrigued, I contrasted this somewhat malleable approach with the more conservative brand-building strategies of group-owned rivals A. Lange & Söhne and Glashütte Original, and the path trodden by fellow independent NOMOS Glashütte. Hutter was quick to point out that while comparisons between Moritz Grossmann and Lange/GO were inevitable, she does not believe them to be fair, or particularly useful in ascertaining the best strategy to propel a new brand like hers forward. The key difference, she points out, is time. A new brand like Moritz Grossmann can not, regardless of how rooted in history its story and practices may be, act like it has been around as long as the “big two” of German watchmaking. While this is true, and while it permits a little more experimentation as the brand finds its feet for the long haul, it should not be ignored that all three companies are producing luxury wristwatches in and around the same price point. It stands to reason that there will be at least some crossover between target demographics. In this writer’s opinion, that makes placing a distilled core collection front and center all the more important. And now has never been a better time to do just that. During the 1880s, Moritz Grossmann wrote a book entitled “Creating a simple, but mechanically perfect watch”. Judging by the practices I witnessed firsthand, the modern-day manufacture is doing a pretty good job of living up to its namesake’s guiding principles. There is care taken in every part of the process. Two CNC machines prepare the main-plates and the bridges, crafted from German silver (an attractive, but soft and mildly reactive alloy of tin, copper, and zinc), while the wheels are cut using a long, automated machine that resembles a Gatling gun, and springs, hands, and other fine pieces are produced by electric wire cutting. Every piece is then hand finished. Building your own gear train and other smaller pieces like springs and pinions enables a company to keep the standard of finishing very high. Hutter relayed to me a conversation she once had with Philippe Dufour, who reputedly said that only he and Moritz Grossman are finishing their wheels in between the teeth. It is this kind of attention to detail that the company’s passionate CEO believes will set the brand apart. With each part created with such care, and patented quirks like the hacking mechanism that uses a small brush of human hair (normally that of Hutter herself, but could theoretically be made from anyone’s hair provided they have enough to spare), or the strap winding system seen on the ladies’ Twist model, the company is taking a no-holds-barred approach to novelty. But more impressive than any of these things, in my opinion, is the Hamatic movement that was premiered last year and finally released earlier in 2019. Its pendulum-inspired winding system is a thing of beauty and one of true technological marvel. I hope, and so should all fans of German watchmaking, that these innovations and idiosyncrasies of this surprisingly charming brand are what comes to the mind first when the name of Moritz Grossmann is mentioned. And while the arresting dials of the brand’s famous limited editions may command more column inches than their core counterparts, it is the unlimited models that are the real stars of the show. If the brand ever decides to produce a core steel model that strips everything back and celebrates the very foundations of the brand, with one of its classically styled German silver movements, a pared-back enamel dial, and those achingly beautiful violet/brown hands, they can put my name on the waiting list immediately. Learn more about Moritz Grossmann, and explores the brand’s true character at grossman-uhren.com.