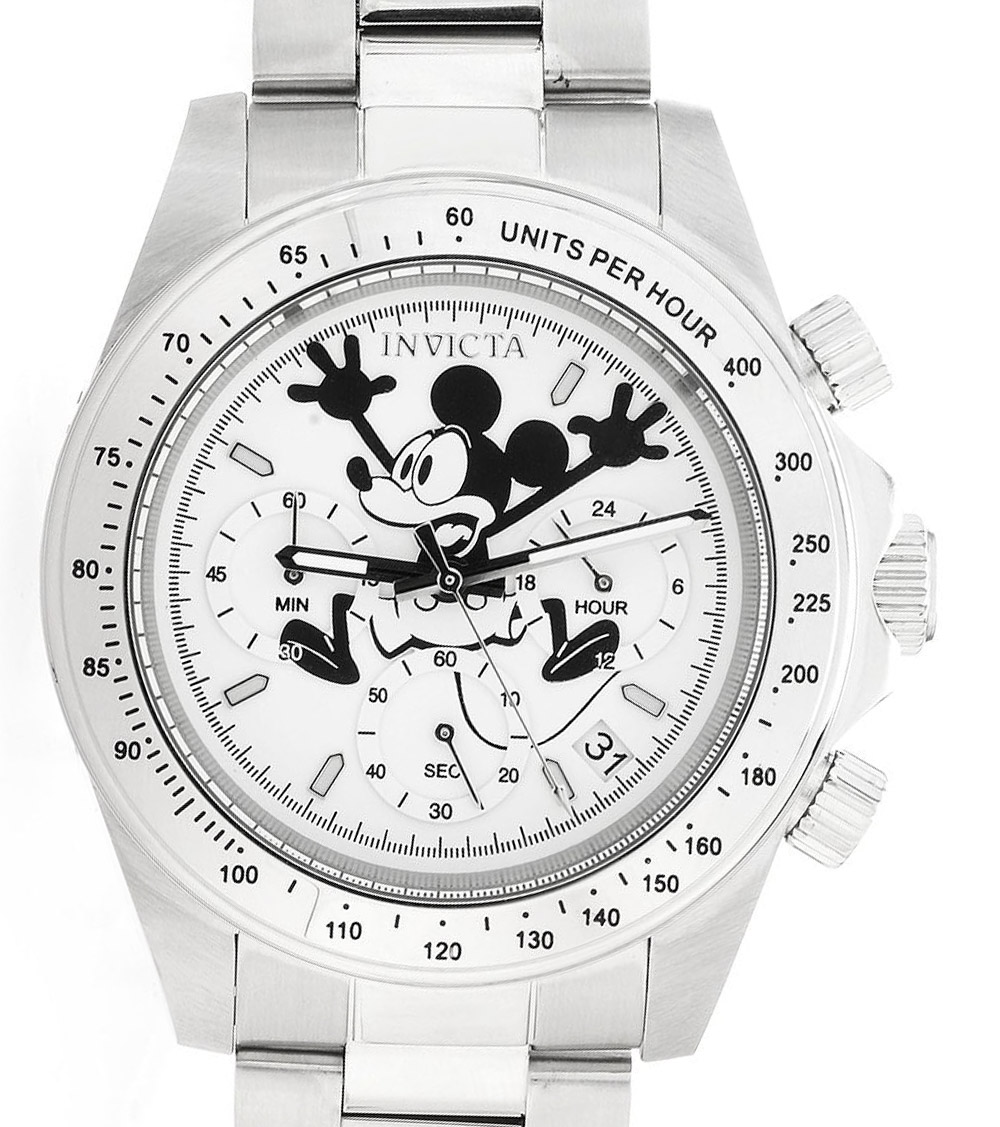 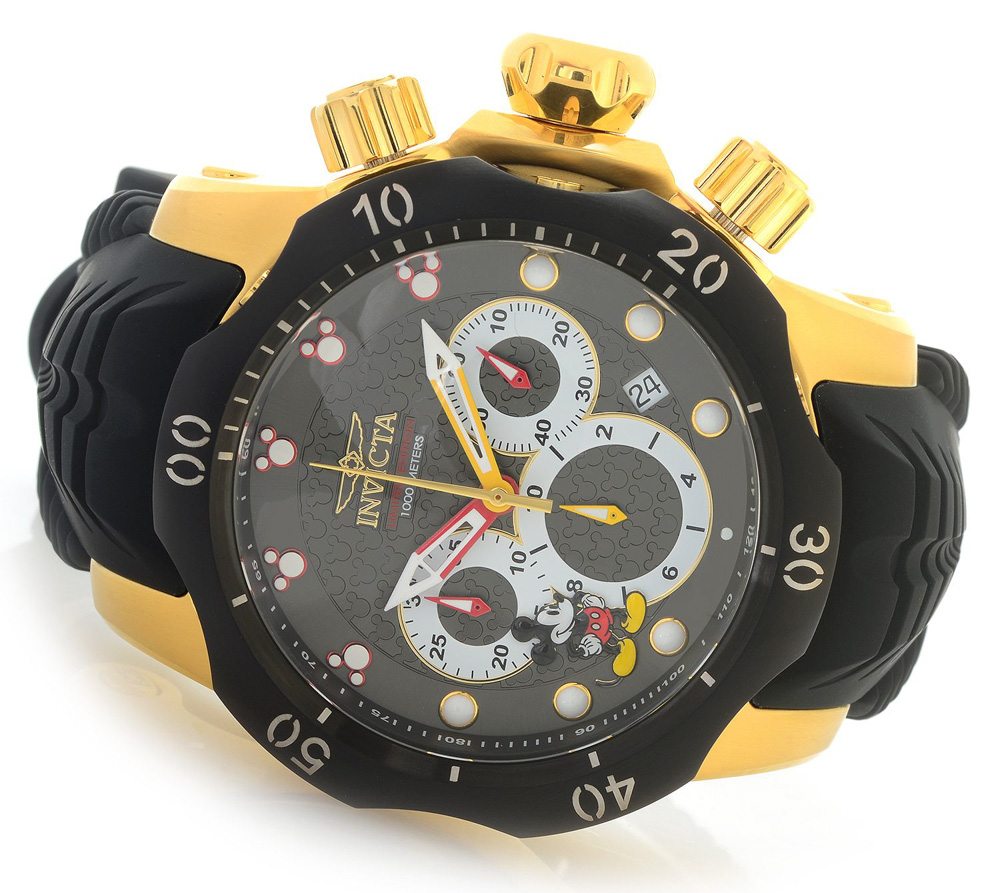 If you want the ultimate integration of what high-end watch lovers don’t tend to see eye-to-eye on with Invicta and Disney, then look no further than that Invicta Disney 52mm Venom Sea Dragon Limited Edition Quartz Chronograph. At a bit over $460, this is the top of the line (for the men’s models) and even comes with a Disney version of a California dial. 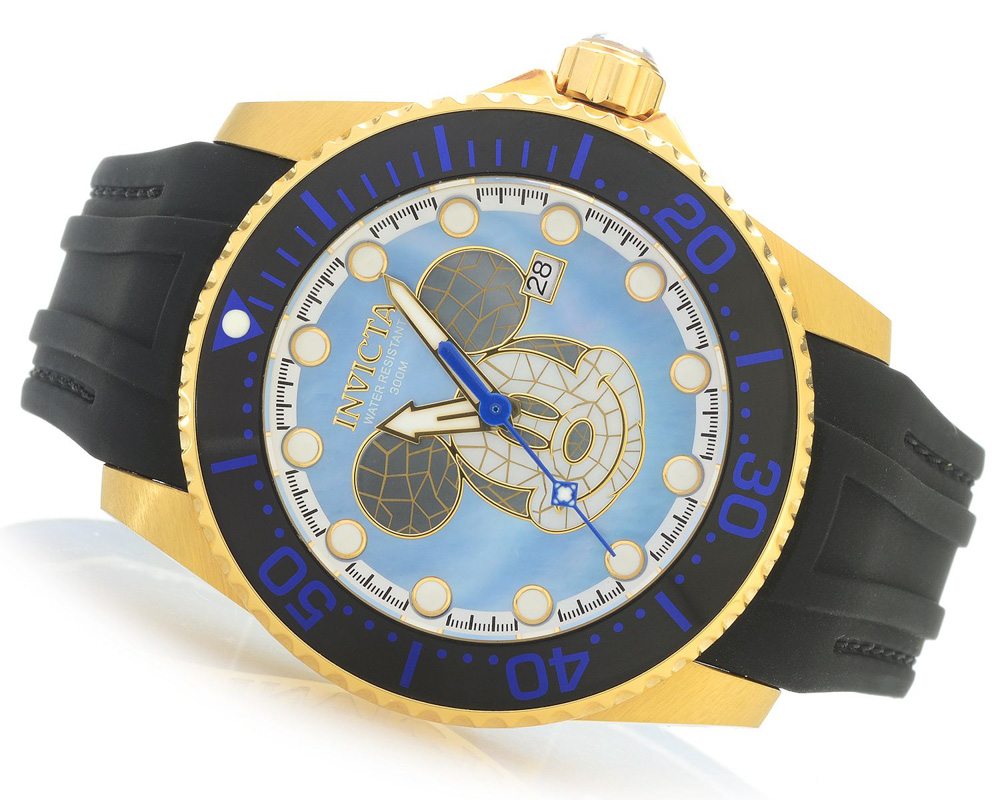 Women get some sporty as well as dressy Invicta Disney watch options including those with fake as well as some real diamonds. I’m not sure these watches would represent the epitome of elegance and good taste for formal attire, but again, for mature ladies who nevertheless have an annual pass to a Disney theme park, Invicta has some decent options. Perhaps the best (and it doesn’t look like a Rolex, either) is the Invicta Disney 38mm Limited Edition Automatic that has some real diamonds, an impressively restrained design, and buckle on the clasp with Mickey Mouse on it (never seen that before). With a Japanese mechanical movement, it costs just under $500. 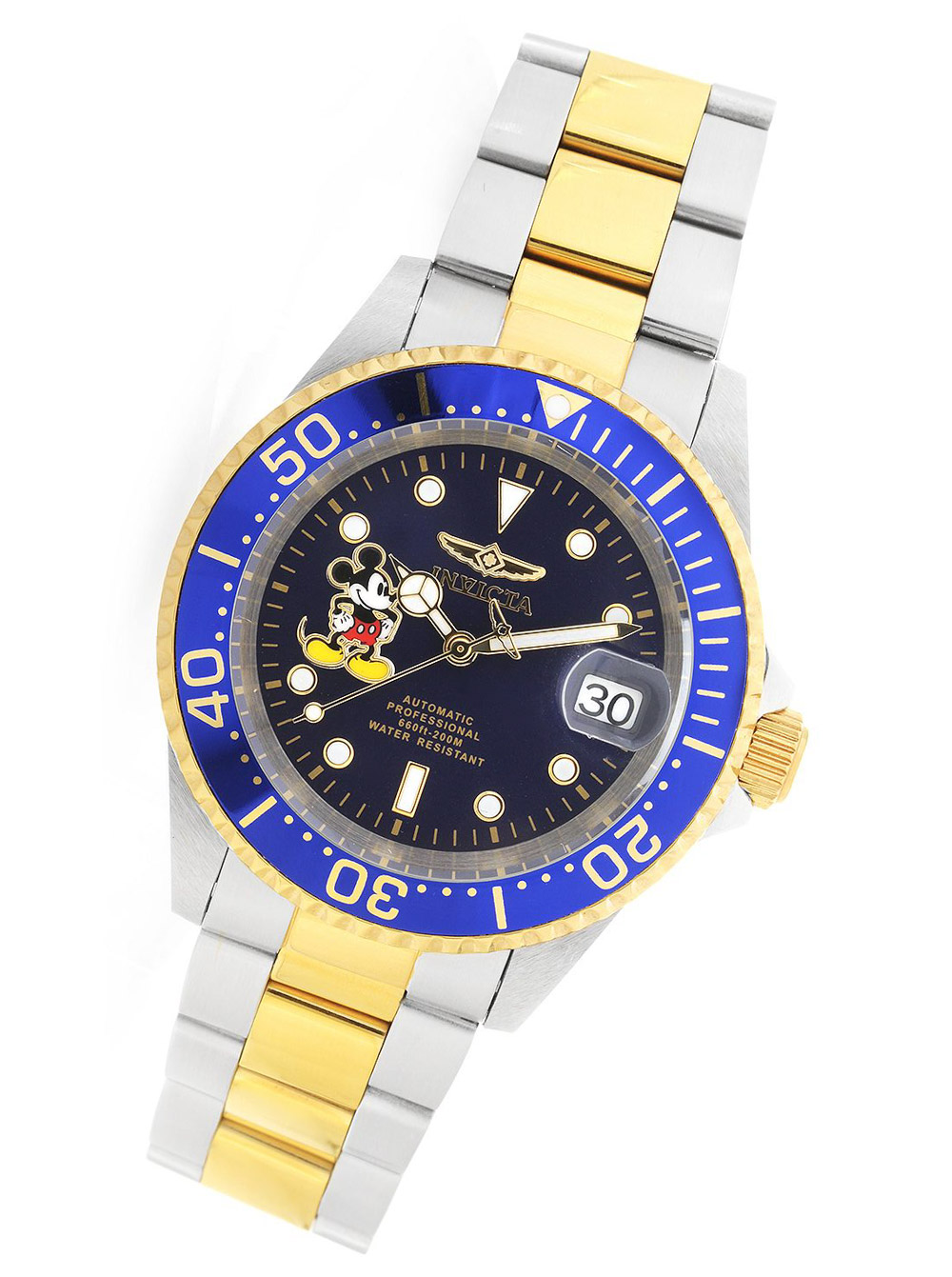 Each of these Invicta Disney watches uses quartz or automatic mechanical movements sourced from Seiko and are assembled in either Japan or Malaysia. If you are looking for luxury quality and serious watches you can probably look elsewhere and accept the fact that it isn’t going to happen around Invicta’s parts. With that said, the company is decent at pleasing their core audience of decidedly non-snobby watch consumers who have been buying the brand’s watches in droves (and none the wiser how seasoned watch enthusiasts speak of them). 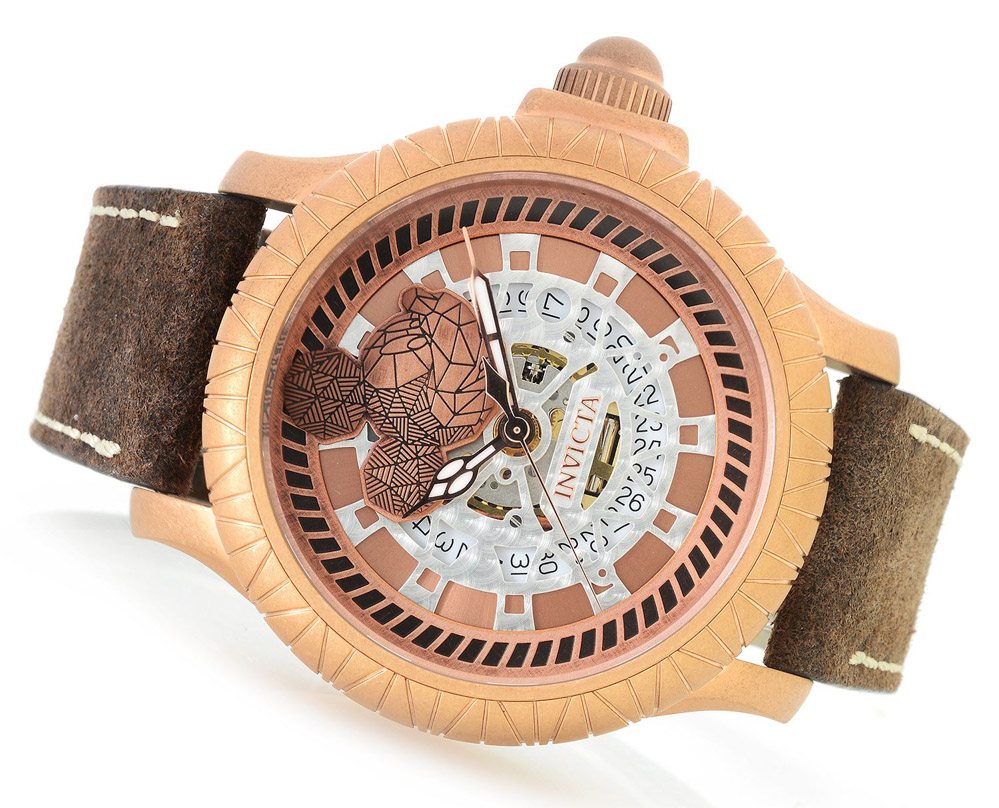 Invicta even decided to come out with a 50mm-wide quartz chronograph Invicta Disney Mickey Mouse pocket watch (in three versions). It is actually smaller in diameter than some of the Disney wrist watches, ironically enough. Design flaws here abound such as too-short hands and a more or less nonsensical use of a chronograph complication. Then again, why am I choosing those particular watches to discuss design flaws among this collection of Invicta Disney watches? If anything, the language Evine wrote in selling these watches is telling of who they are marketing to: “It’s got just enough of the traditional with details fit for the here and now as a stainless steel case creates a strong build. It’s definitely old school in an awesome way, like something your cool grandpa would be into. And the star of the show is Mickey Mouse, of course… You’ll find a removable chain at the top with a hook clasp so you can do that whole inside your jacket pocket thing (you know you can’t wait to pull it out like a boss).”

Invicta even offers a Pelican-style carrying case (for three watches) that comes complete with Invicta and Disney/Mickey Mouse branding with each of the watches. The level of design effort and involvement here is apparent, but I can’t help but wonder what higher-end brands would have done if they were tasked with making some more appealing modern day Disney watches. 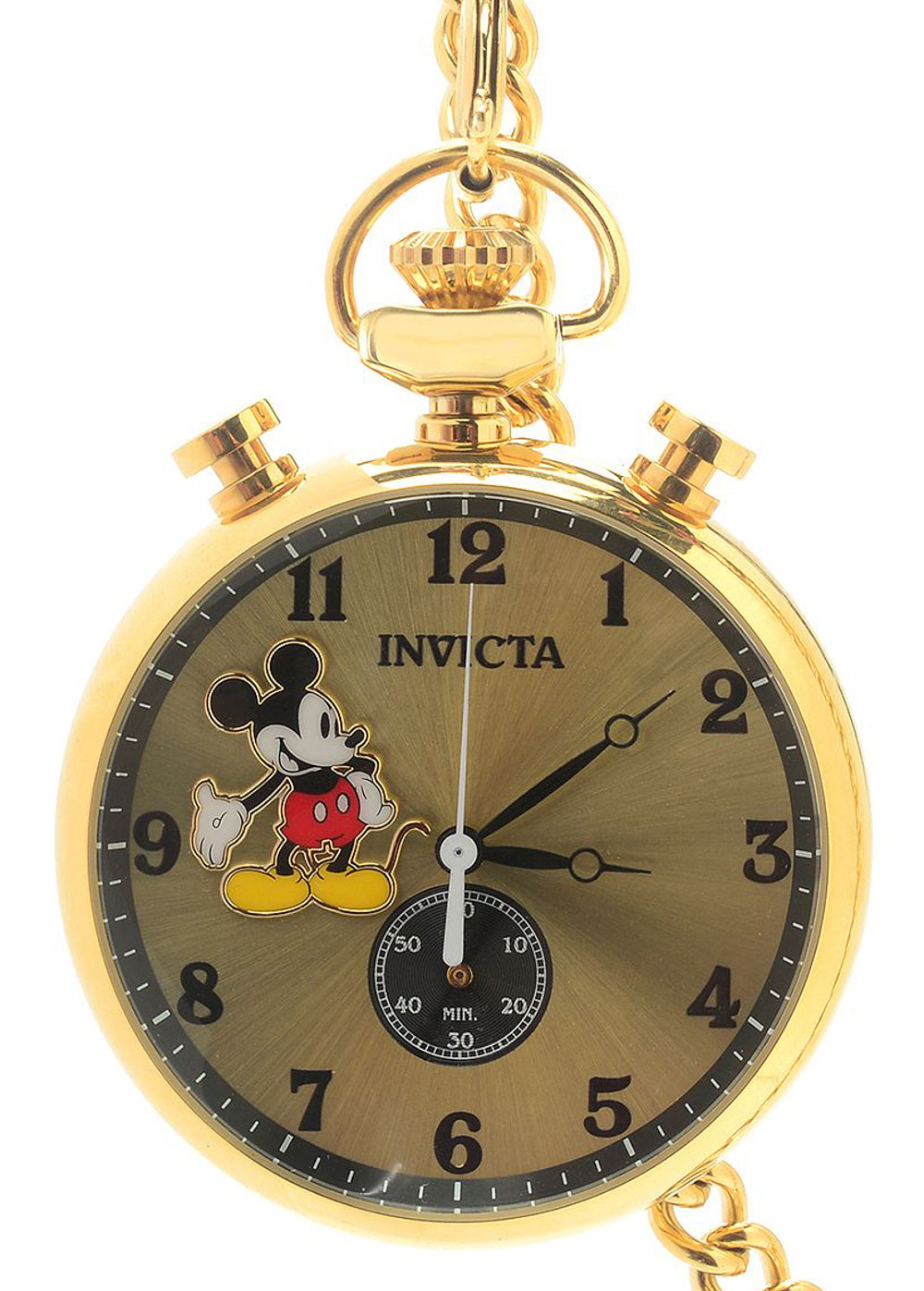 Invicta is probably celebrating, as many of these Invicta Disney watches are already sold out (just days after their launch at the time or writing). That doesn’t surprise me because for Invicta’s core customer base these timepieces are probably super cool. While I don’t think most of the aBlogtoWatch audience is going to find huge appeal here, the design exercise and resulting watches are interesting, to say the least. Disney merchandising products today can be sadly bottom-of-the-barrel in both price and quality as evidenced when examining the larger breadth of the items you can buy that includes their names and imagery. With that said, Disney has also been increasingly open to working with higher-end brands (even watch makers). Don’t forget all the Seiko Star Wars watches and well as the Devon Star Wars Tread 1 Limited Edition. What I think Disney should do is not only be open to working with high-quality watch makers, but rather than waiting for yet another merchandising license opportunity, reach out to a brand that they feel can do Disney heritage and legacy justice.