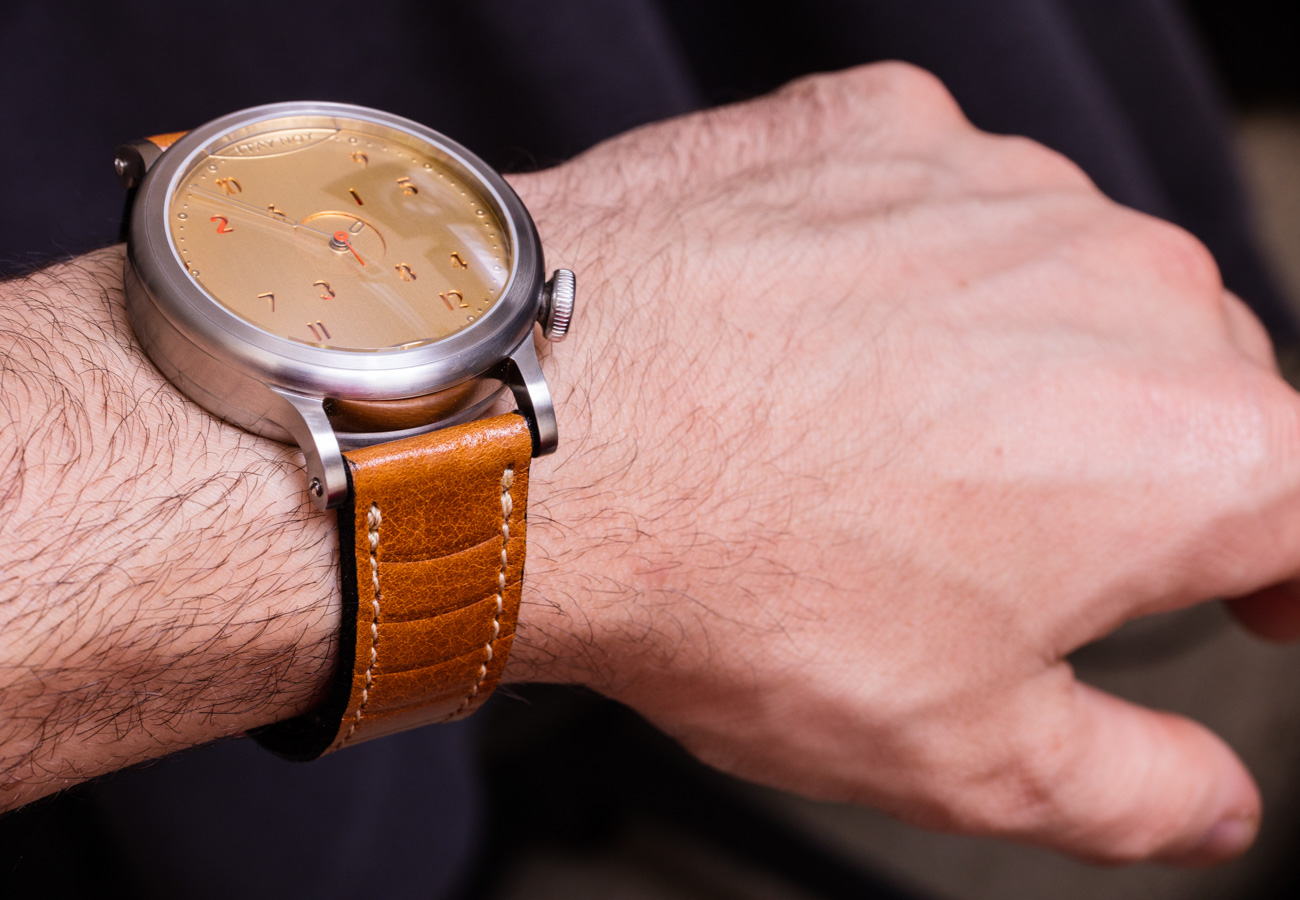 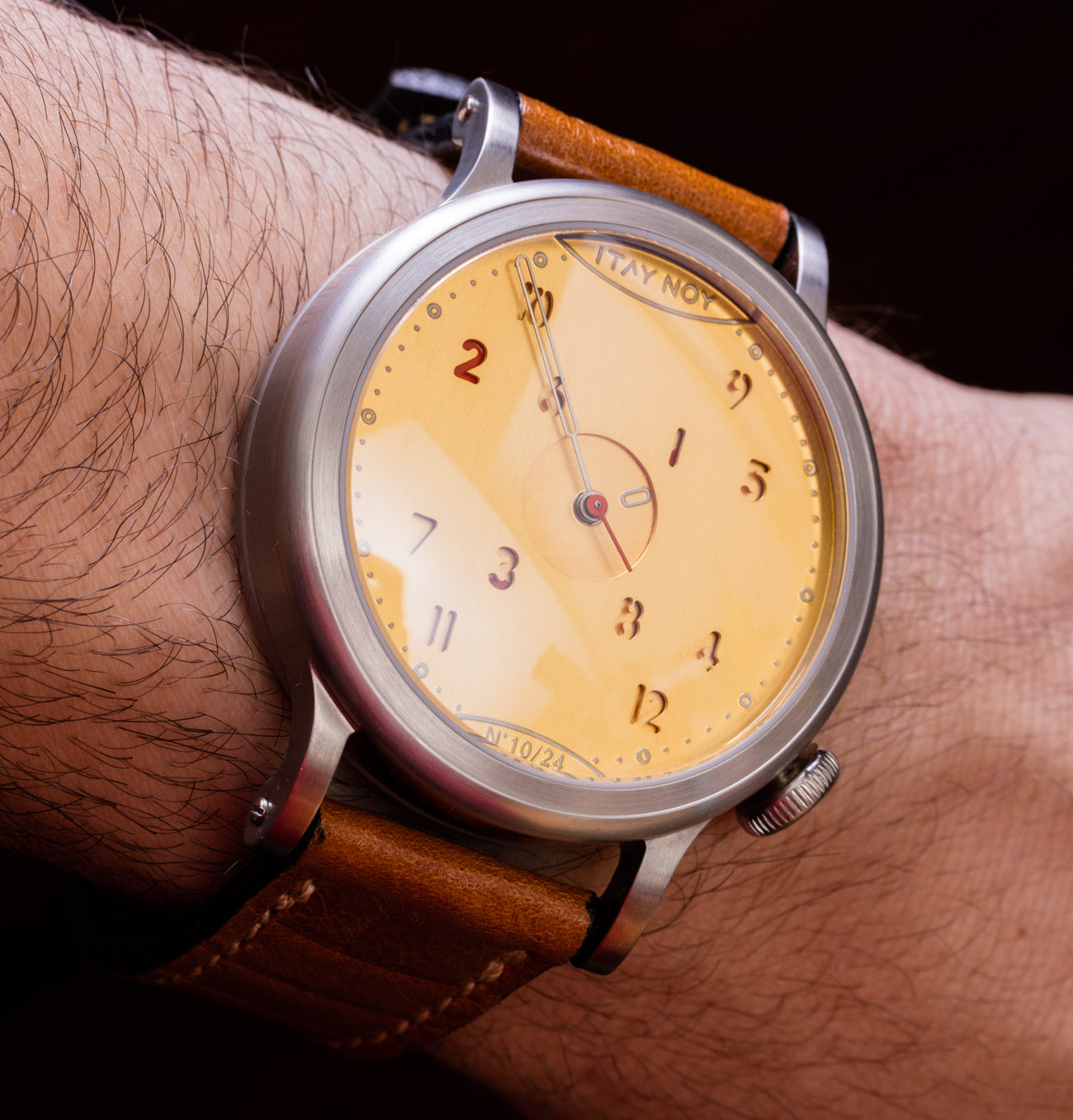 One of the most time-honored (no pun intended) pursuits of timepiece design is to think of innovative ways to display the time. Historically, that trend was due to ambitious watchmakers trying to give their products a legibility or performance edge by creating specific watches for niche purposes. More recently the expression of time aside from the standard two-three hand dial with central revolving hands is more of an art form. Independent, Israel-based watchmaker Itay Noy likes to do just that, and for his limited edition ReOrder watch, he has played an interesting and clever game on the dial to display the time in a slightly different way. 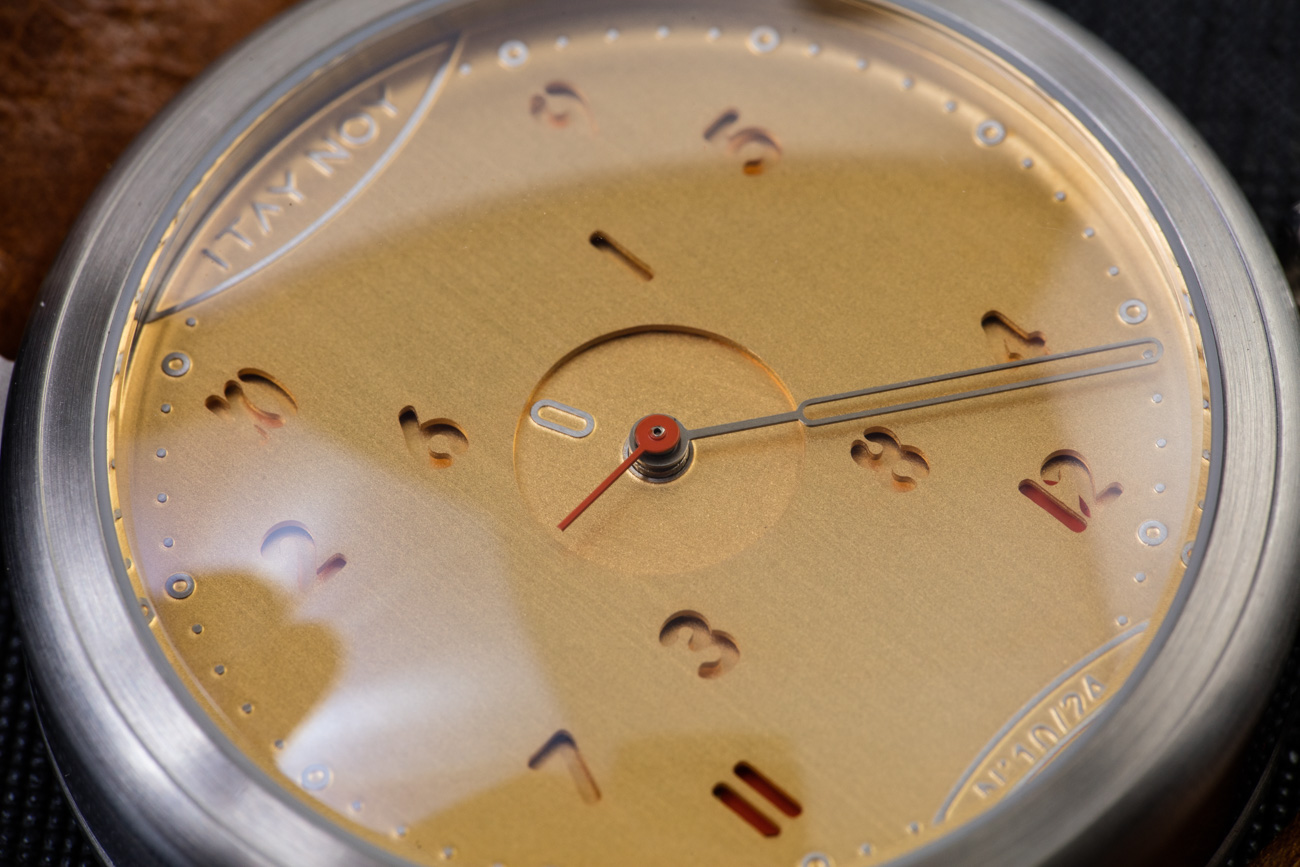 Not all watchmakers can produce something as vividly wild as, say, the Franck Muller Crazy Hours, which has a standard minute hand but an hour hand that jumps around to various positions to indicate the time. The ReOrder is inspired by watches like the Crazy Hours but done in a more simple way that offers a different type of dial design. The basic idea of this watch is that the hours are indicated via both a small hand and a disc. That disc moves underneath the main dial and highlights various hour marker windows — which aren’t placed in standard numerical order on the dial. 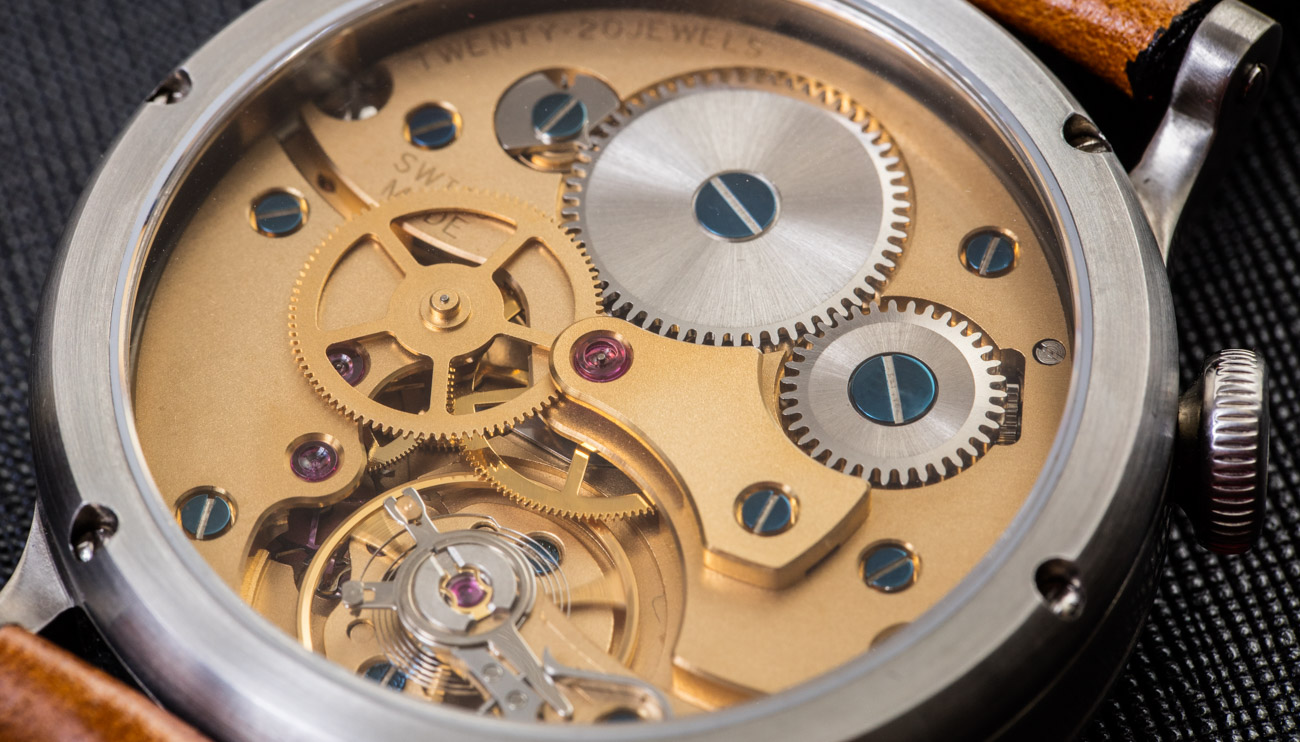 The result is a dial with a traditional minutes hand, more or less traditional seconds hand, and two ways to indicate the hours, including the “digital” display by means of the disc moving under the main dial. What would have made the effect better is a true jumping hour system. As it is, the disc moves gradually as any hour hand would. That means the digital display tends to have the red color to highlight the current hour often placed between one hour and the upcoming one. The small hour hand helps orient the correct time, but the effect would have been a bit more satisfying (and probably expensive) with a jumping hour system. 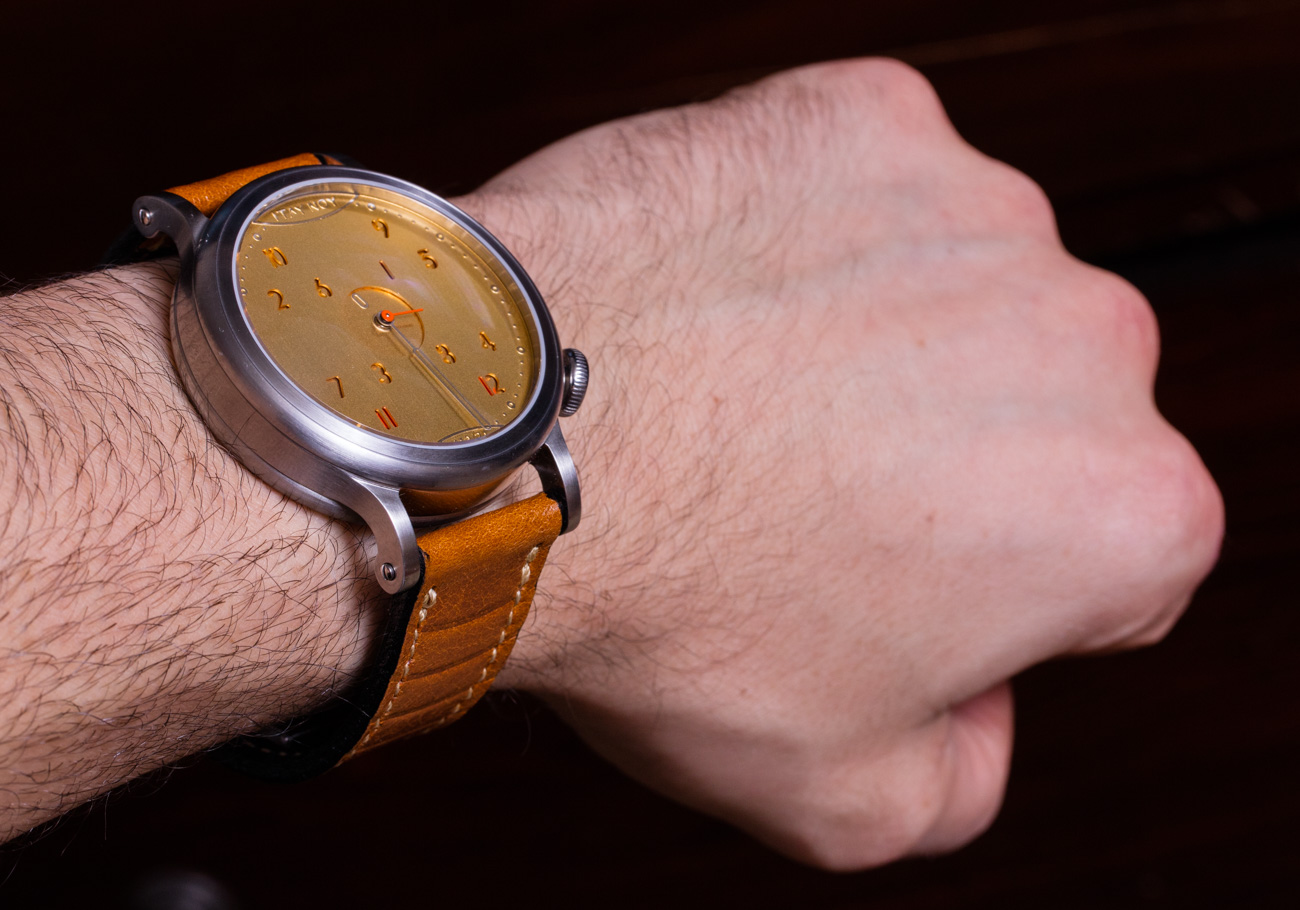 Itay Noy currently produces three versions of the ReOrder watch that include a white and blue dial in addition to this neat gold dial version. I believe that the white dial ReOrder is probably the most legible, but the gold-toned dial mixed with the brushed steel case and light brown leather strap really spoke to me visually. Legibility is not exactly the ReOrder’s strong point – which is perhaps not entirely surprising. Dial proportions are correct, but it isn’t easy to see the skeletonized minute hand or the red sections under the current hour indicators at glance on this gold-toned model. In fact, the entire usage of skeletonized-style hands sort of confuses me, to begin with. I mean I understand that, artistically, they go with the hour marker windows, but the most legible hand on the dial (the small seconds hand) is really quite small and, in my opinion, the minute and hour hands should have also been “filled in.” 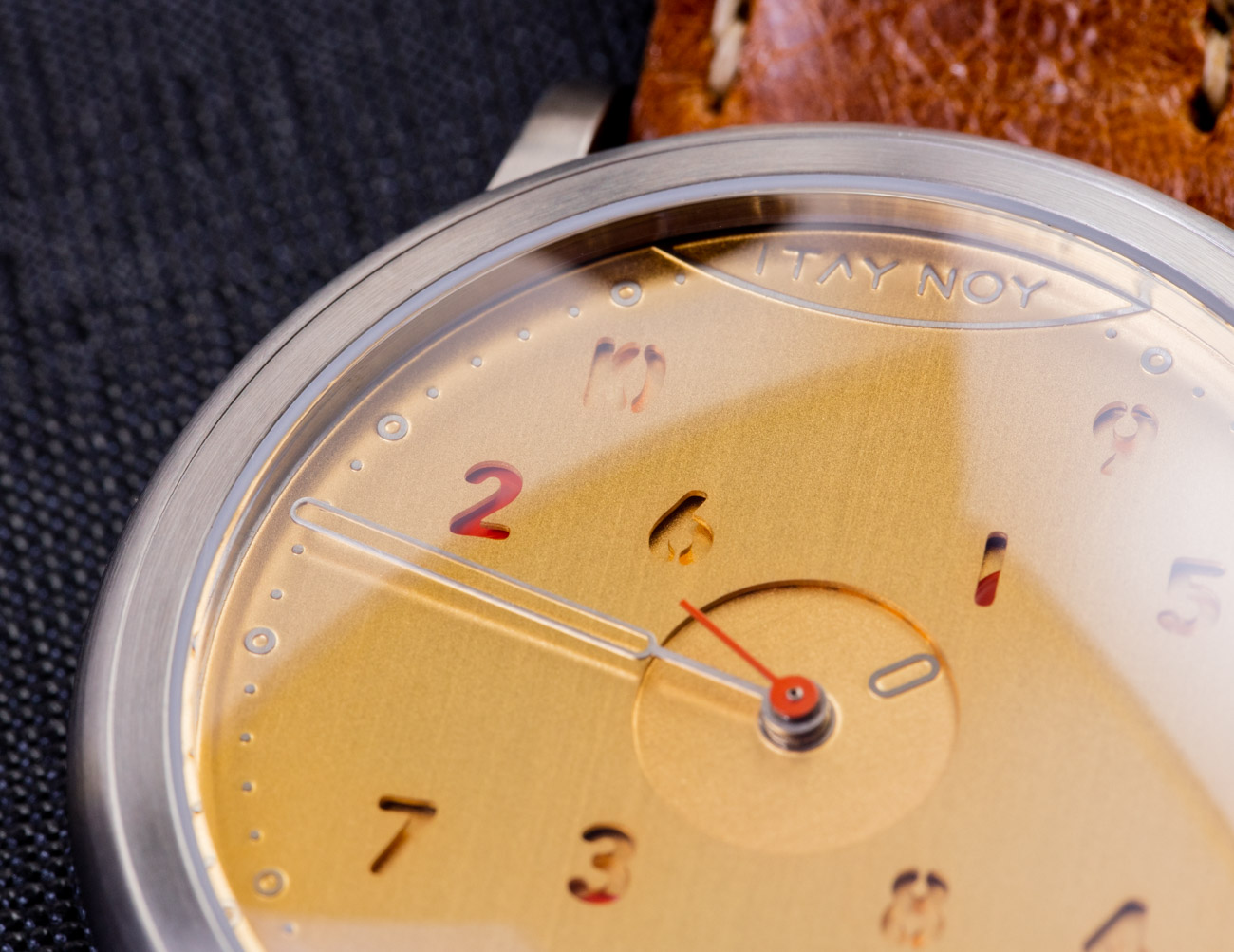 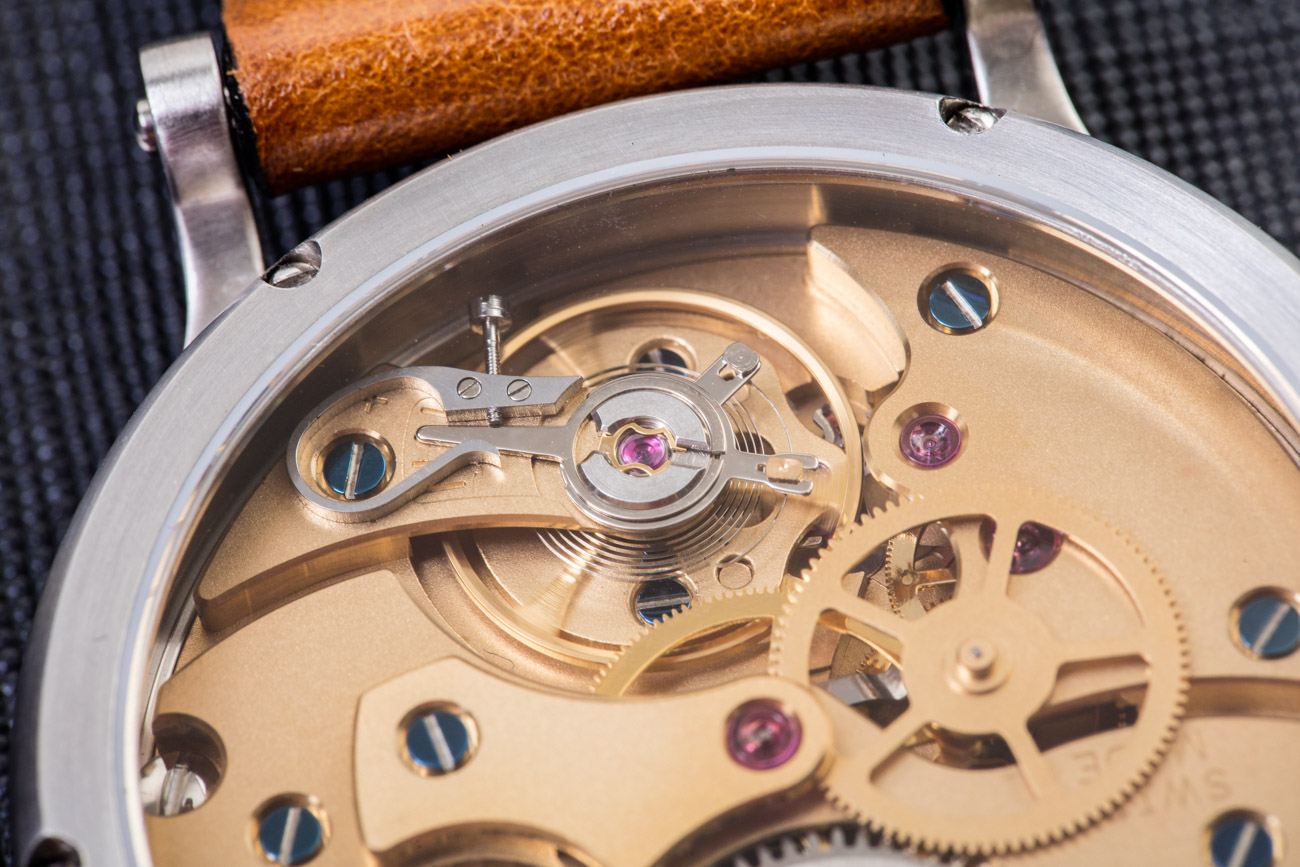 The case is typical Itay Noy in design, which is a good thing. The ReOrder is on the larger side at 44mm-wide and about 12mm-thick. Over the dial is an AR-coated and domed sapphire crystal. The steel case (water resistant to 50 meters) is of a very high quality and polished really nicely. The strap is handmade, according to Itay Noy and also of a high quality. I’ve always liked the look of his signature case design on the wrist.

What brings the ReOrder to life is to best understand how it fits within Itay Noy’s larger body of work. For a long time, he has played with the idea of mechanical fascination, art, and craft when it comes to low-production watch design. That he is able to produce a unique movement for a limited edition of under 100 timepieces is pretty impressive. I also like the overall dial concept that doesn’t limit the user to reading the time in the counter-clockwise “re-ordered” way, but with the traditional hand, it can be read both ways. Little touches like that make for a good independent watch design, in my opinion. 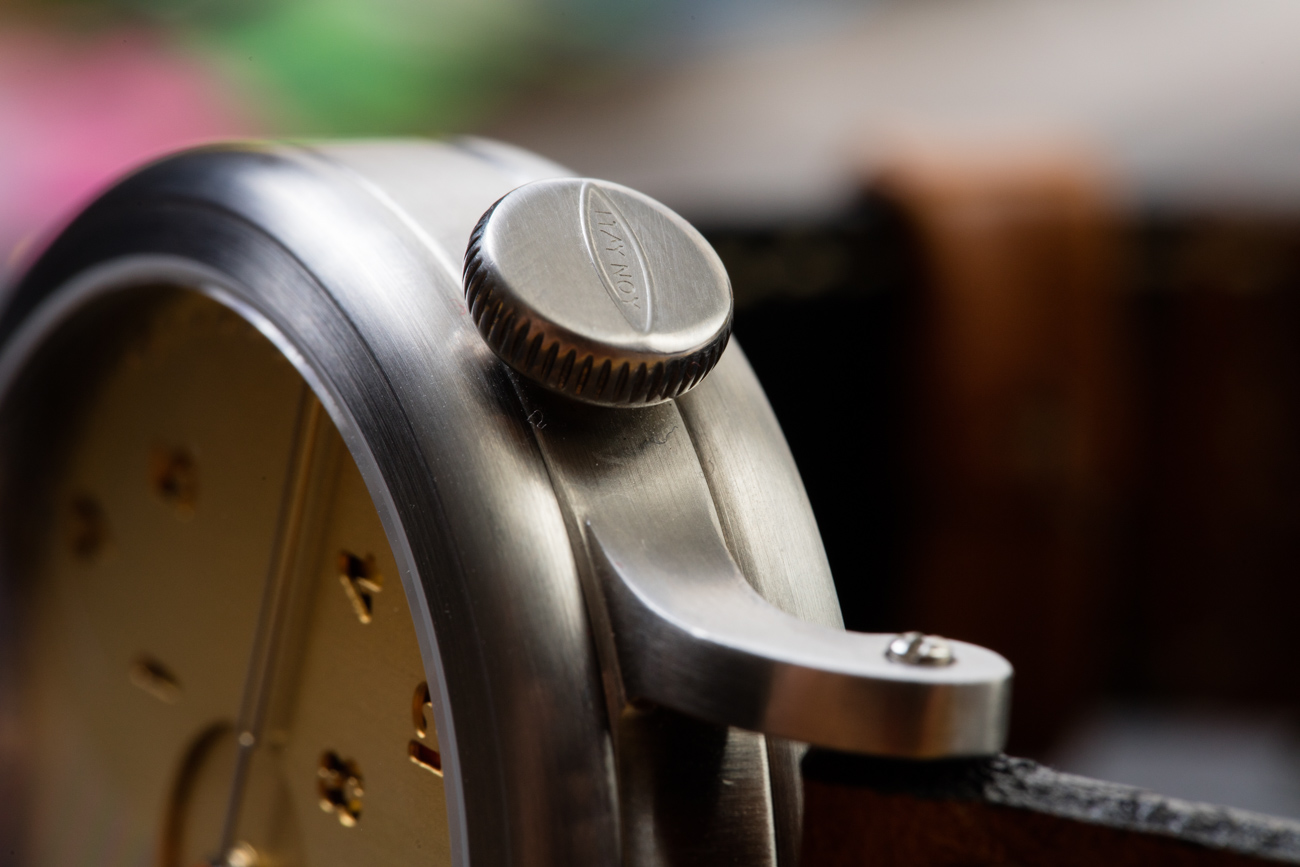 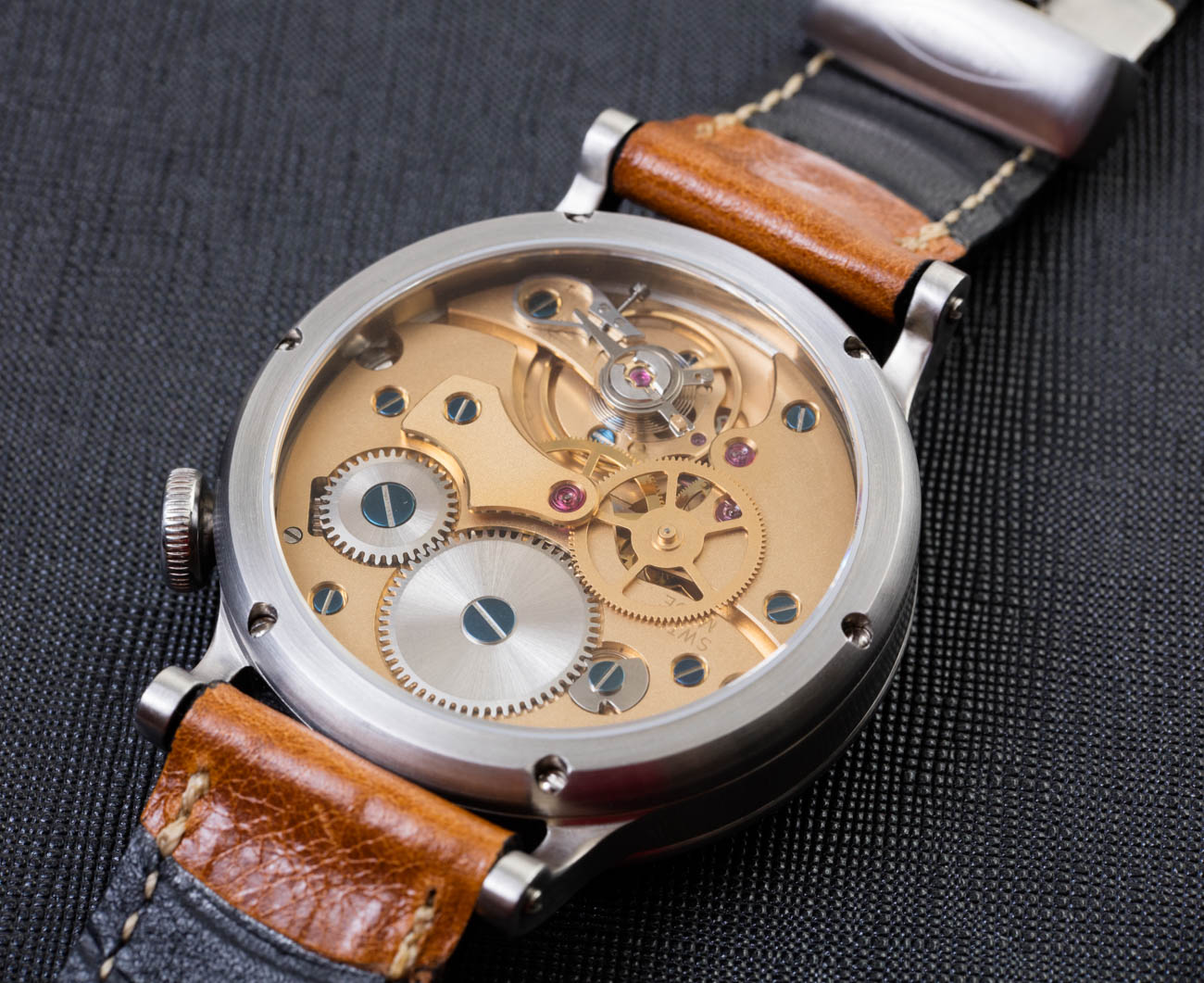 What is nice about the gold-tone dial version of the ReOrder is how the movement matches the face. Itay Noy calls this manually wound mechanical movement his caliber IN.IP13. It seems to use a base UNITAS architecture that has been modified a good bit. The movement (viewable through an exhibition caseback) offers 42 hours of power reserve and operates at 3Hz (21,600 bph). The added bridge and gears make for an interesting look to the movement along with the uncommon gold tone of the bridges and the blued steel screws. 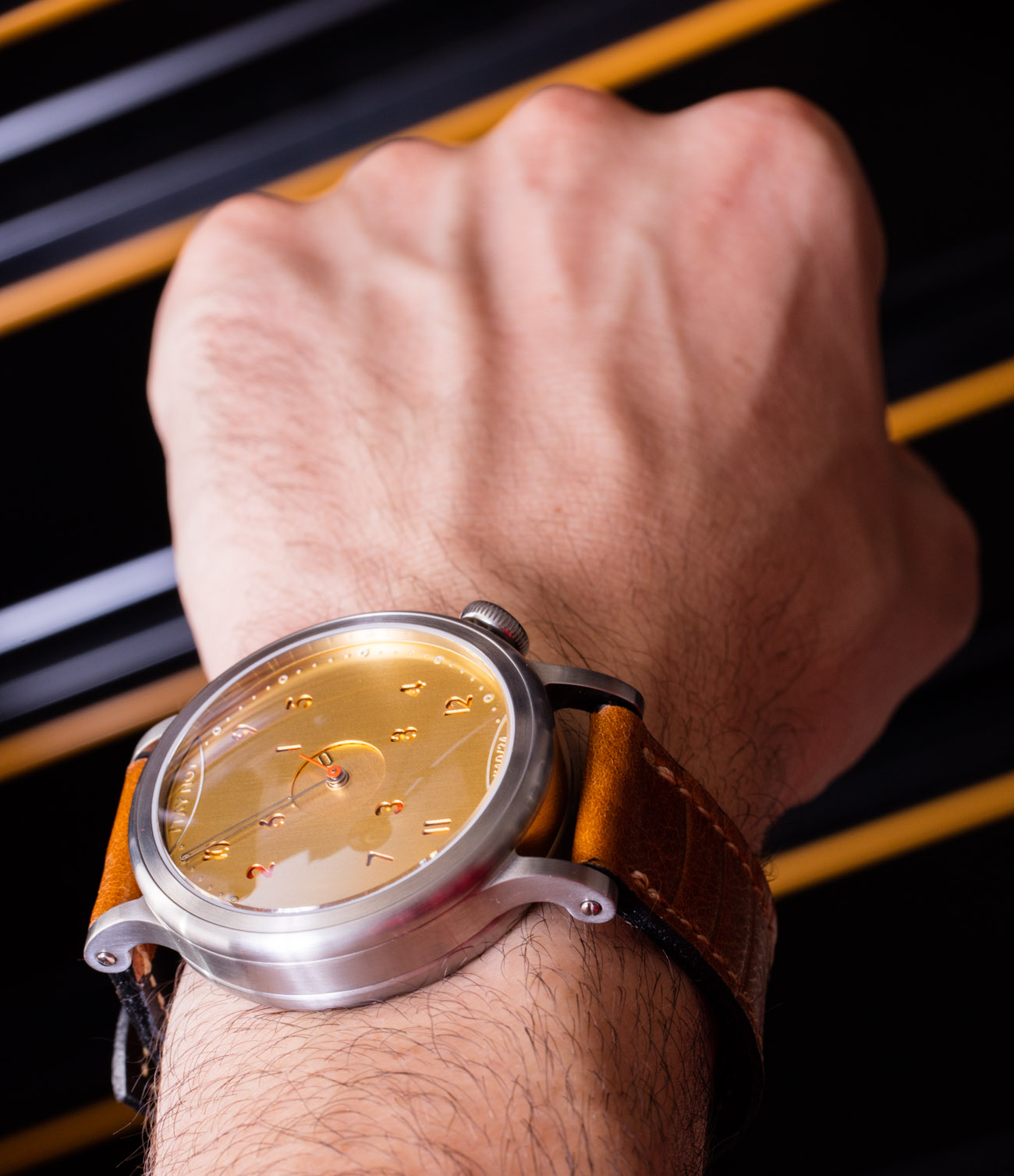 Un-mainstream and unconventional is how Itay Noy and the rarefied brands like this prefer it. If you are seeking a daily tool watch, this is not it. If you are seeking work from a boutique artist, as well as a traditional timepiece, then you are on to something. Legibility may not be this gold-toned Itay Noy ReOrder’s forte, but the white dial model is probably best for that. The watch does have a good wrist presence, feels comfortable, and is a great conversation piece. It is also a limited edition of just 24 pieces (for each of the three dial colors). Price for the Itay Noy ReOrder watch is $6,800 USD. Learn more at the Itay Noy website here.