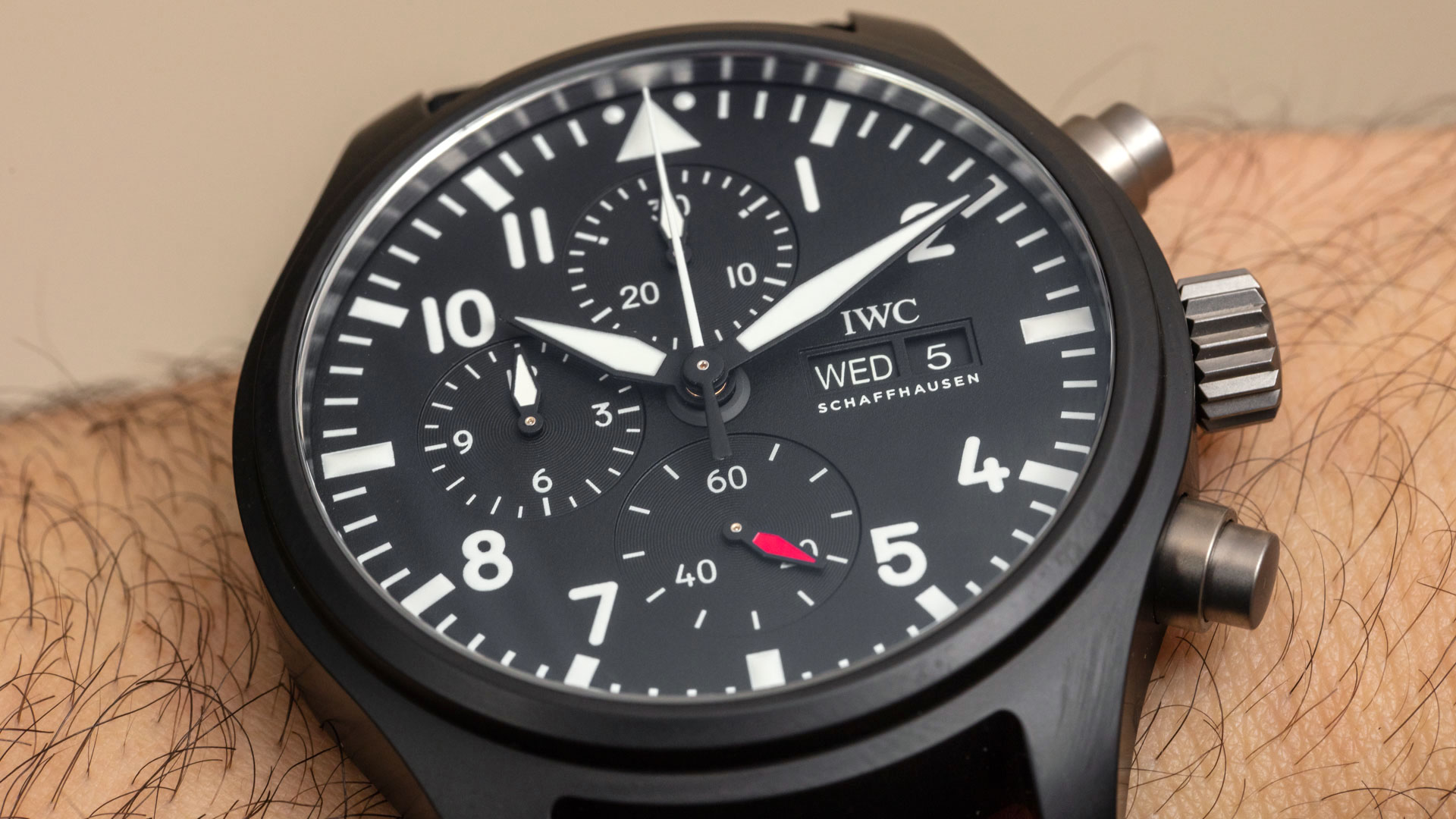 About a decade ago, one of the coolest IWC watches out there was the TOP GUN version of the Pilot’s Watch Chronograph — with the Double Chronograph (rattrapante) model being among the most interesting. I recall being at an event with IWC and meeting Robin Williams there — he was wearing one of the original IWC Pilot’s Watch Double Chronograph watches on his wrist — the same timepiece he was wearing during photoshoots as seen on various magazine covers. That said, the IWC TOP GUN watch collection was not only cool because a very cool guy decided he liked to wear one.

For 2019, IWC decided to bring back the TOP GUN versions of the Pilot’s Watch Chronograph in a simple but satisfying form for today’s generation of watch lovers. This particular version is the matte black ceramic reference IW389101, and it is currently joined by the reference IW389103 “Mojave Desert,” which is an all sand-colored version of the same watch. IWC’s re-lease of the Pilot’s Watch Chronograph TOP GUN logically coincides with the release of the long-awaited sequel to the 1986 Hollywood movie TOP GUN. In 2020, TOP GUN 2: Maverick will be released, also starring the original movie’s hero, Tom Cruise. It isn’t clear if there is an official movie tie-in, but I wouldn’t find it challenging to believe since IWC has a good history of trying to be placed in relevant movies. 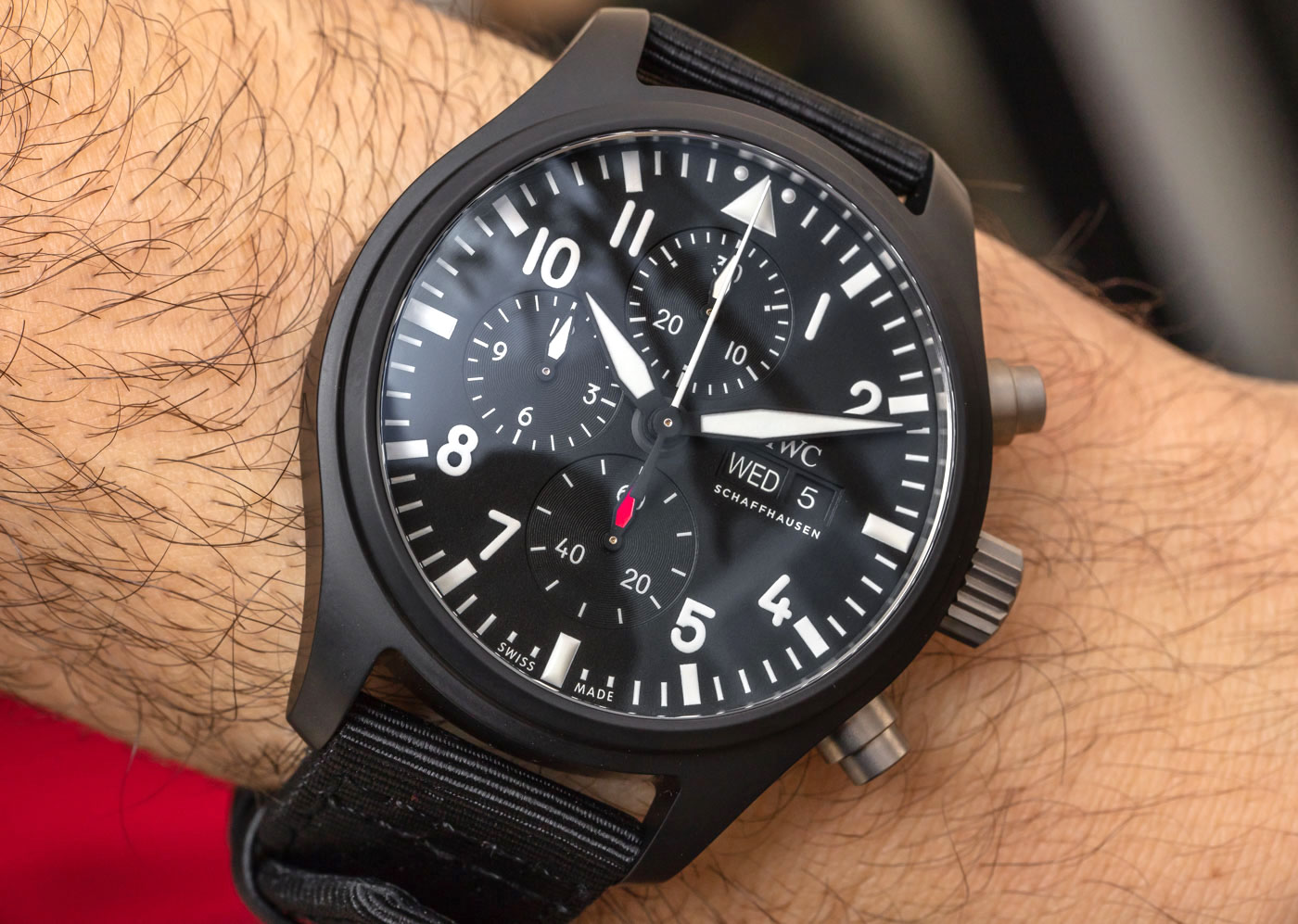 An interesting part of the TOP GUN story is the rivalry between IWC and Breitling — as both have had “Top Gun” watches. Not all the legal elements of the story are clear to me, but you must realize that, in the watch space, there is a lot of territorialism when it comes to working with the same types of partners. IWC and Breitling would not be working with the same TOP GUN at the same time. So, what I believe happened (at least in the past) is that Breitling had the right to the TOP GUN fighter pilot school logo, and IWC had the rights to use the TOP GUN logo from the 1986 movie. Today, I am not sure who is working with whom, but I can say that the TOP GUN branding on the new for 2019 IWC Pilot’s Watch Chronograph TOP GUN watches is much more minimized. 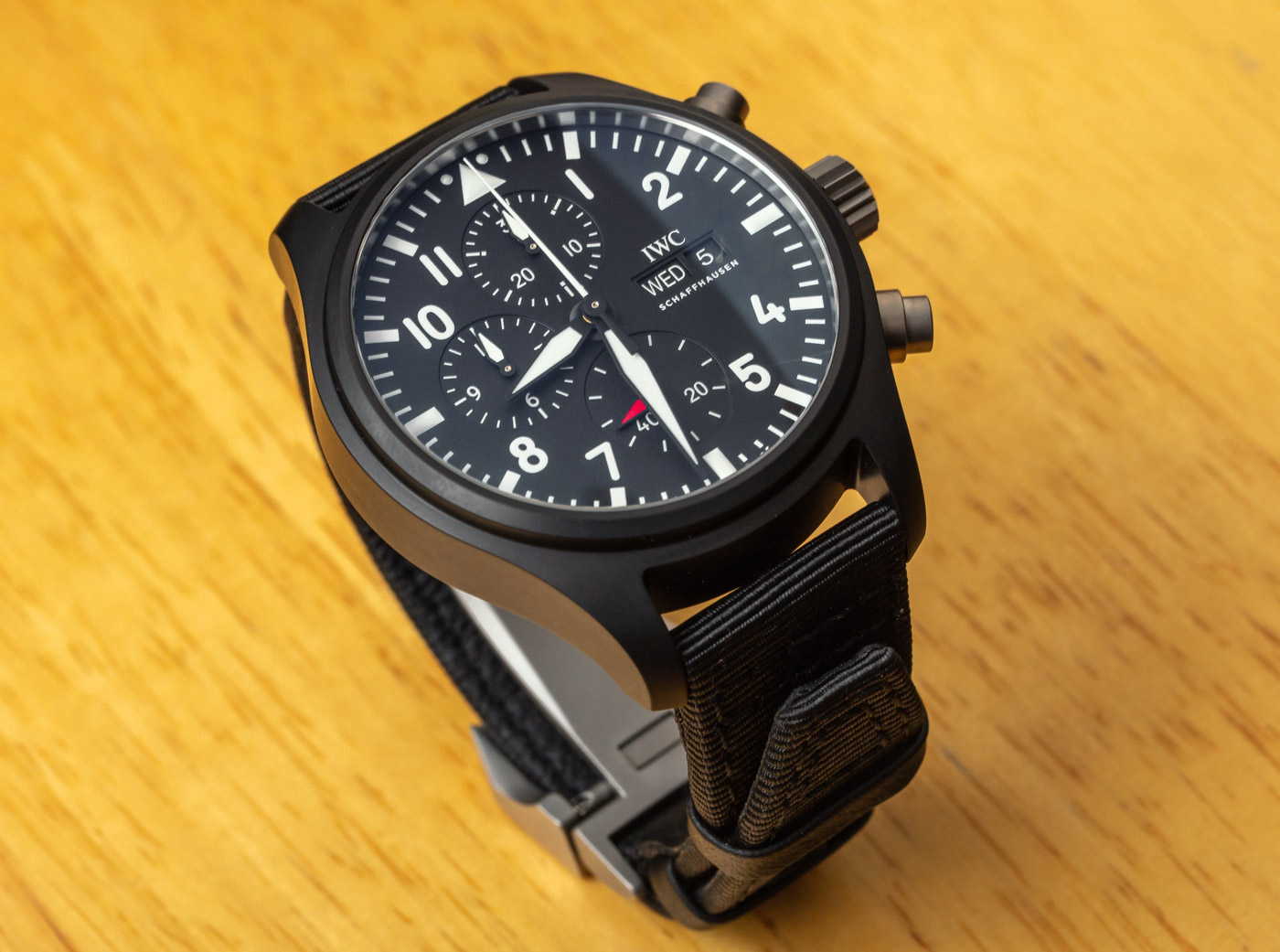 My favorite thing about the original TOP GUN watches was the colorful red, white, and blue TOP GUN logo place on the side of the watch on the case. I believe the rear of the watches also had pretty colorful TOP GUN logos. The 2019 models have no TOP GUN branding on the case sides or the dial, and instead has the TOP GUN logo engraved in the steel caseback. In any event, I’m pretty sure the pilot student at the U.S. Navy’s prestigious fighter plane weapons school would be more than happy to wear one of these timepieces. 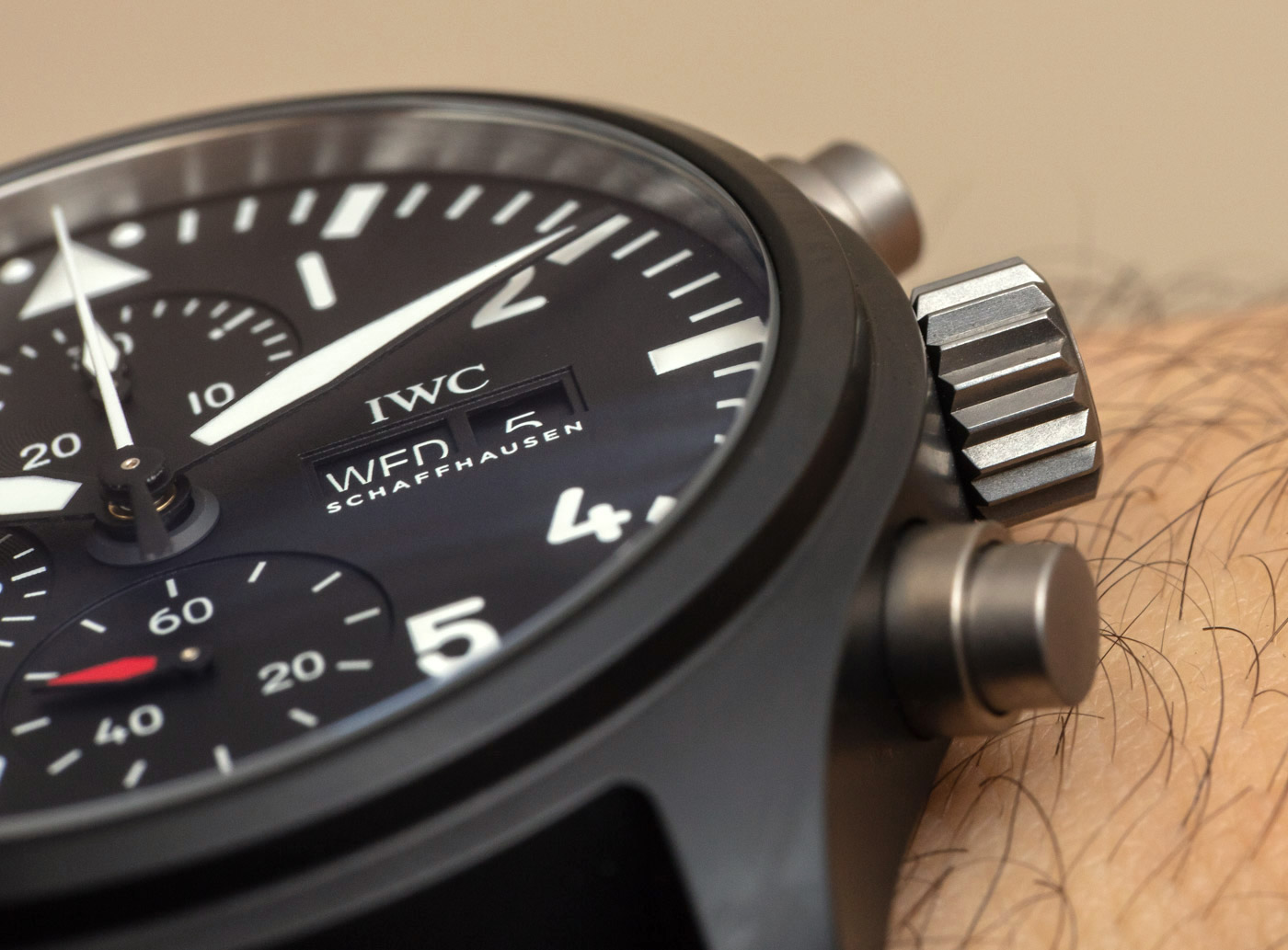 The 2019 Pilot’s Watch Chronograph TOP GUN has a number of minor differences compared to the older models. One that enthusiasts will probably enjoy is the more simplified date (not the open date) window on the dial. Another change is the move to a more fully in-house movement with the calibre 69000. This movement is designed to be similar to the Swiss ETA Valjoux 7750, which the original TOP GUN Chronograph watches had. The 69000 has some differences, of course, and doesn’t look the same if you were to see the movement. It has a column wheel as part of the chronograph assembly, and it has a dual directional pawl winding system, which basically just means that the automatic rotor winds the watch no matter which direction it turns in. A lot of mechanical automatic watches have a rotor that only winds when it turns in one direction. 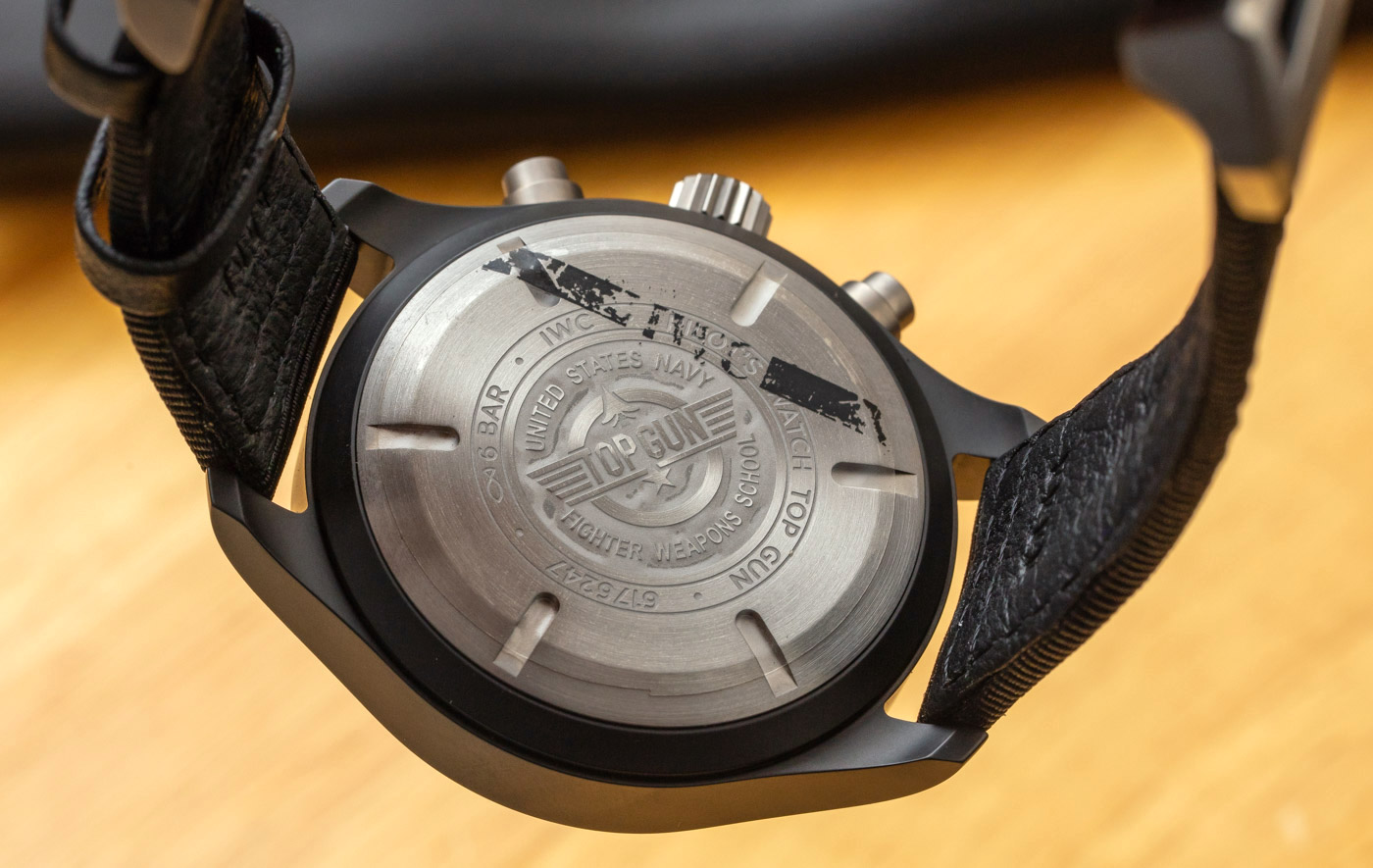 IWC has previously been using a Pellaton bi-directional winding system, which is similar. IWC was one of the only companies (if not the only) to use a Pellaton system. I did, however, hear that IWC had a bit more than its fair share of service issues with the Pellaton system, and my feeling is that it was simply engineered out with a replacement dual-directional winding system that was more reliable over time. Otherwise, the 69000 movement operates at 4Hz (28,800 bph) with 46 hours of power reserve. The movement features the time with date and day of the week, as well as a 12-hour chronograph (such as the Valjoux 7750 does). That said, IWC’s 69000 positions the running seconds dial at 6 o’clock while that of the 7750 is at 9 o’clock. 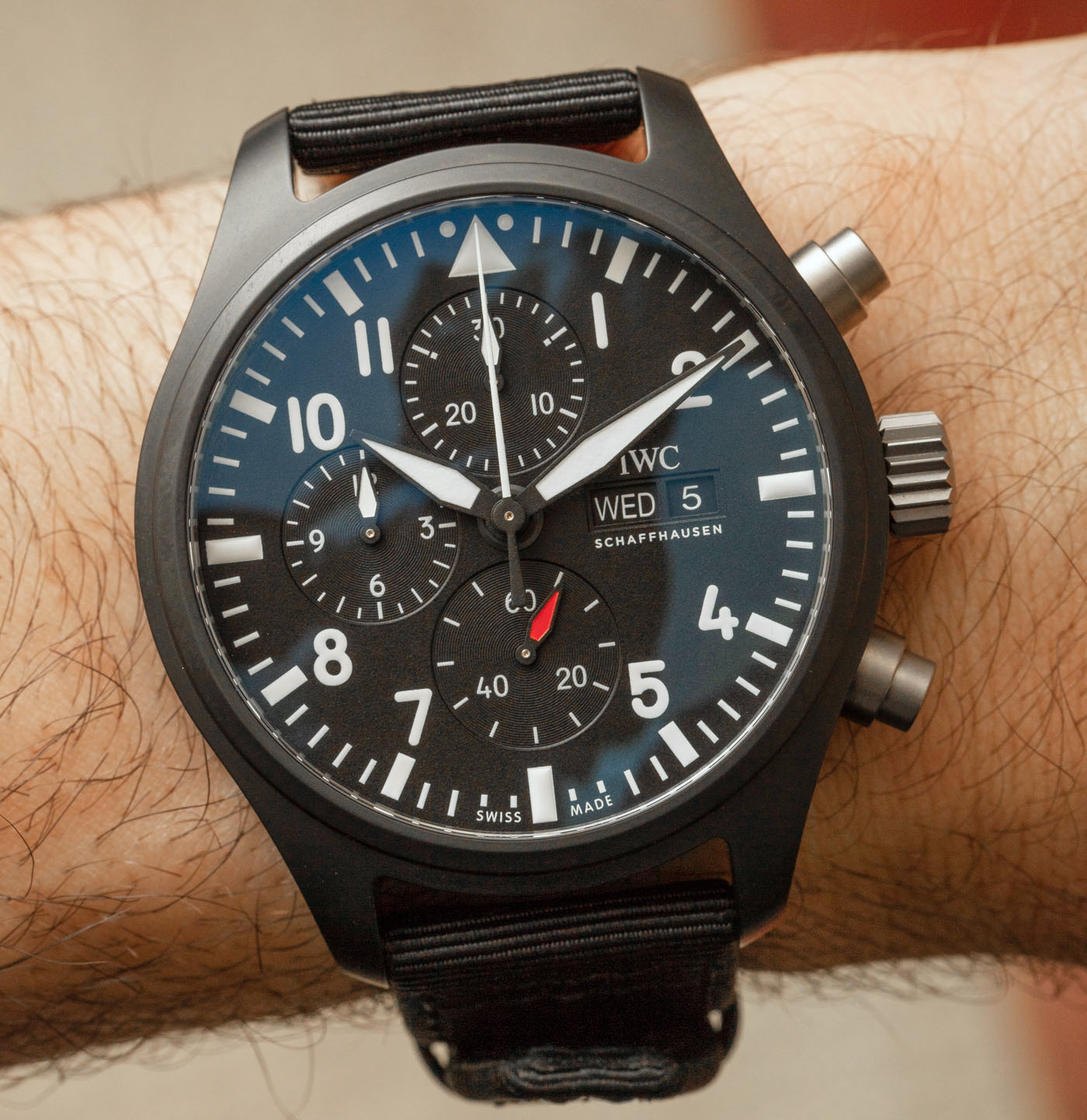 IWC uses a 44.5mm-wide matte black ceramic case for the Pilot’s Watch Chronograph TOP GUN, and the result is rather handsome looking for 2019. IWC was an early adopter of ceramic as a case material, but it didn’t always use entirely ceramic cases, rather ones that were coated over metal. I found that some of these cases were more fragile than I would have liked and actually scratched. I am pretty sure those types of materials are in the past because, even after a lot of wear, this particular IWC Pilot’s Watch Chronograph TOP GUN watch is in very good shape. 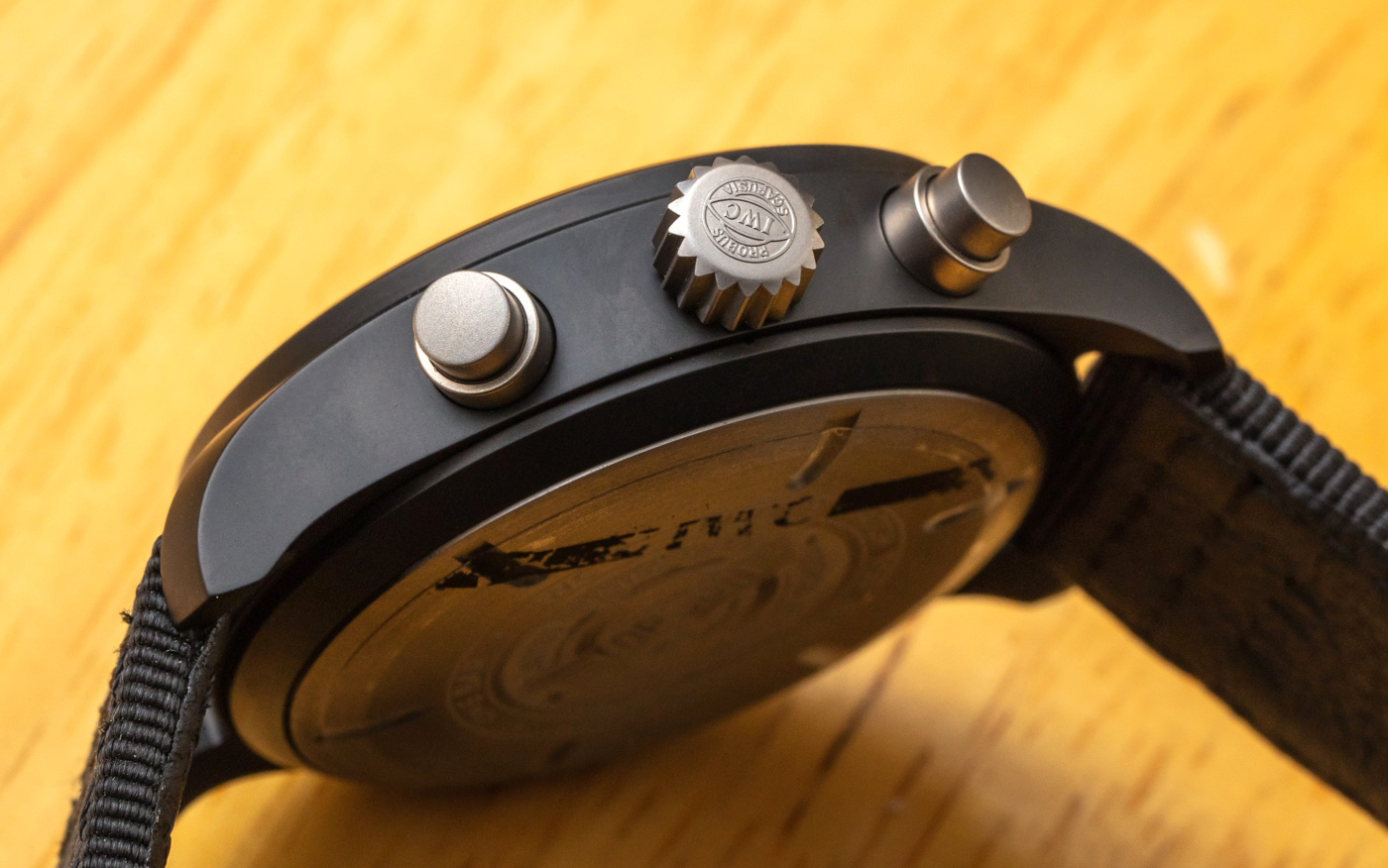 The matte black ceramic case is water resistant to 60 meters (not 50 meters because IWC just likes to be that way) with a nicely AR-coated sapphire case and metal accents in the form of the caseback and the material used for the pushers and crown (as well as the deployant buckle). I don’t really mind the two-tone look for the case, but I think this might have been an even nicer watch if all the parts matched and were matte black in finish.

I can’t say with more emphasis that the design of this watch dial is totally utilitarian and meant to look like a tool. That is both good and bad, given that it doesn’t come across as a fancy luxury product. In fact, if it weren’t for people knowing more or less “what an IWC watch is supposed to cost,” they might believe this Pilot’s Watch Chronograph to be a bit more accessible in overall price. Then again, IWC continues to produce this theme of pilot’s watch just a little bit better than most of the competition when it comes to things like the quality of the dial printing, the hands, and the overall watch’s fit and finish. 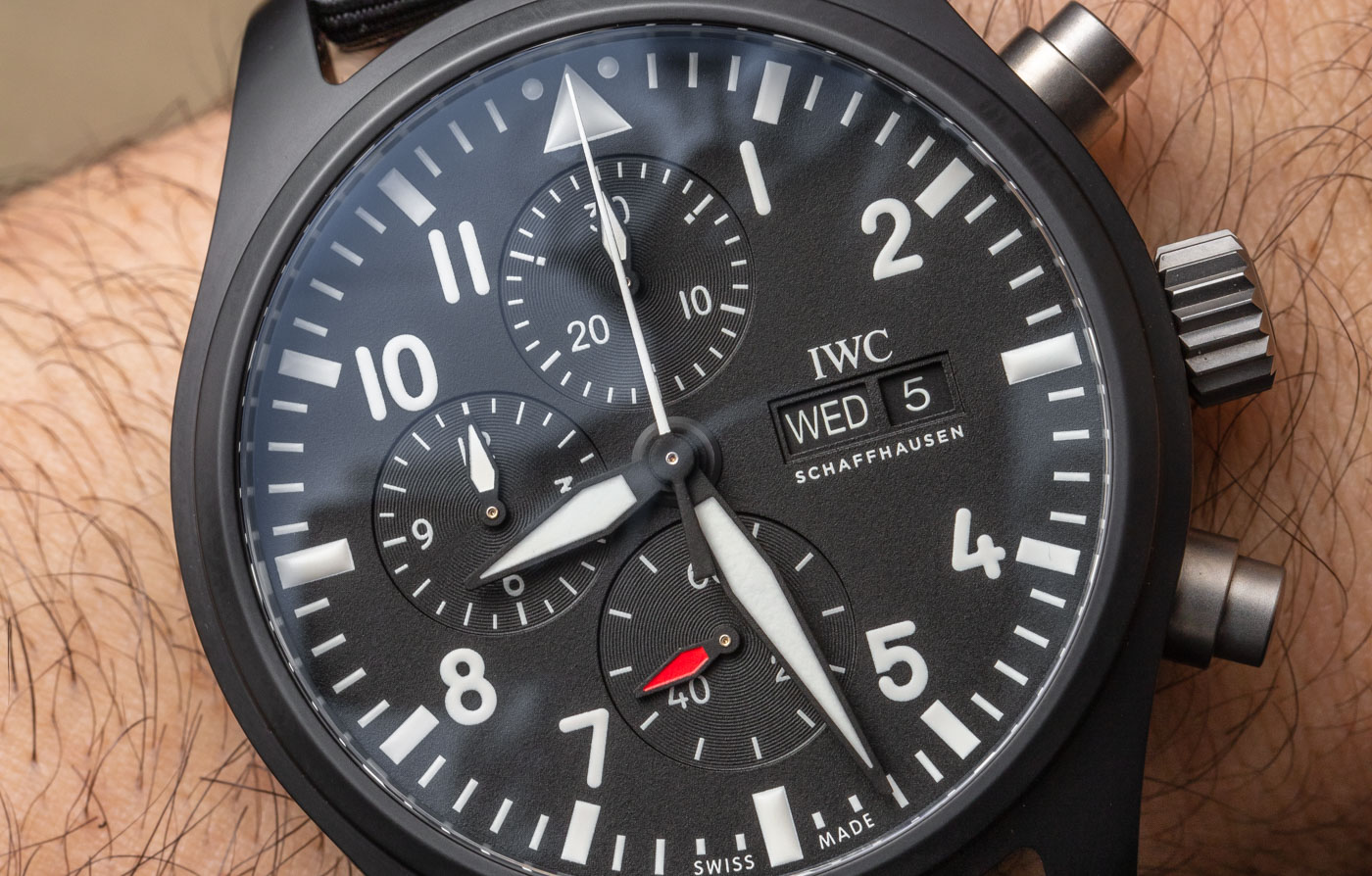 The dial is all about maximum legibility and executing what would be a traditional pilot’s watch chronograph-style display. One of the few “flairs” (if you want to call it that) is the red-colored subsidiary seconds dial. The dial is mostly flat (perhaps too flat), save for the slightly recessed subdials. At times I look at a dial like this and, while I appreciate its high-functionality, it doesn’t move me emotionally. At other times I love the simple straightforwardness of the dial as something easy to understand in my otherwise hectic life. So while the IWC Pilot’s Watch Chronograph TOP GUN dial is actually effectively “instrument-like” in its presentation, there are natural pluses and minuses to that. 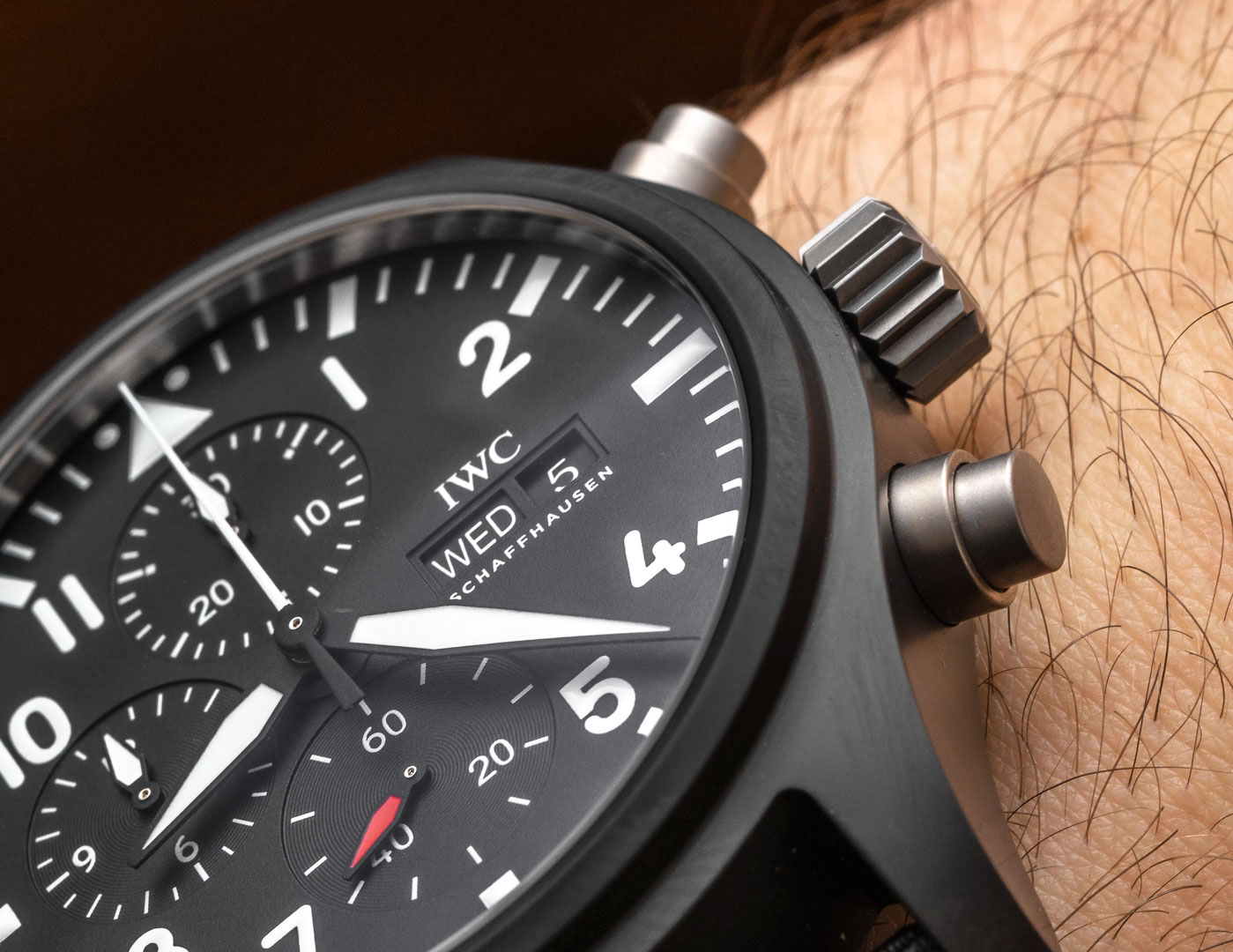 The almost 45mm-wide case isn’t too large on the wrist but this isn’t a small or even medium watch. IWC paired it to a textile-style strap in black that is lovely to look at but has some drawbacks. In addition to it looking very nice, I noticed that, over time, the strap didn’t fray as many other textile straps might. The strap is thick and lined with black leather for added durability and probably comfort. The strap is not, however, very pliable, and when combined with the included fold-over deployant clasp, it isn’t optimally comfortable, either. As a quick fix, I’d try to replace the deployant clasp with a more simple ardillon buckle, or I’d simply try another strap after a while. The good news is that a basic black-and-white-style watch like this TOP GUN will look great on a large number of strap options. 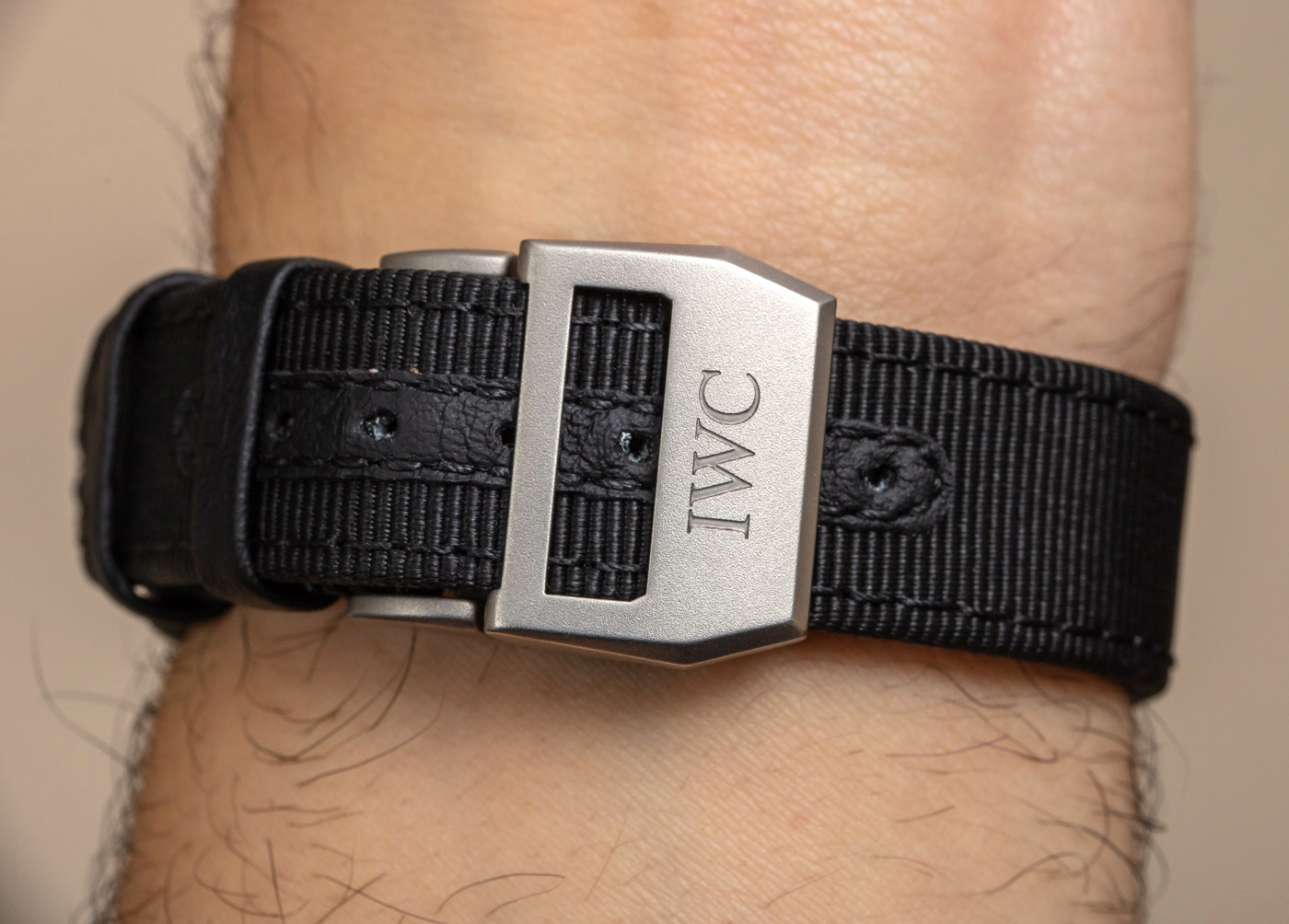 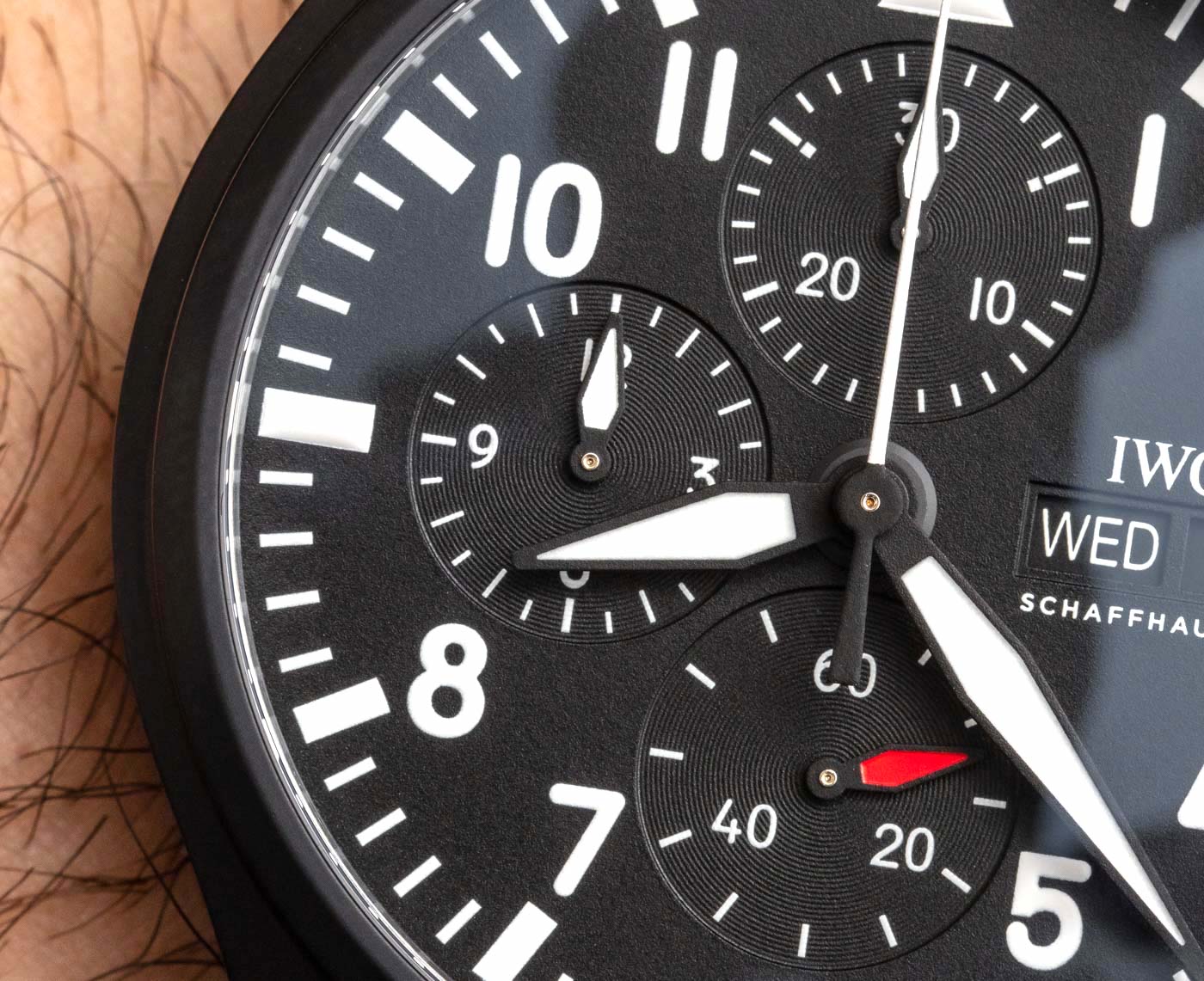 Military pilot watch lovers with a fondness for IWC and luxury watch brands will see the Pilot’s Watch Chronograph TOP GUN as an effective intersection of their various interests. IWC does a nice job at making a cohesive (albeit not perfect) wristwatch that will get compliments and be fashionably stylish while asserting an authentic active male theme on the wrist. At worst, the watch lacks enough fresh design originality to truly add personality to the wearer, but that is getting into nuances of design nerdery. If you like this look in a watch and think the TOP GUN theme is cool, I can’t see you being too disappointed (though I have a feeling at some point during the lifespan of this watch, the user will change the strap). Try to have fun while wearing the IWC Pilot’s Watch Chronograph TOP GUN (reference IW389101) because this is a watch that will want to keep up with you. Price is $7,550 USD. Learn more at the IWC website here.

Necessary Data
>Brand: IWC
>Model: Pilot’s Watch Chronograph TOP GUN reference IW389101
>Price: $7,550 USD
>Size: 44.5mm-wide, 15.7mm-thick, and about 53mm lug-to-lug distance.
>When reviewer would personally wear it: As a handsome tool watch for regular wear when I just want to hide behind a credible-looking military pilot’s style watch.
>Friend we’d recommend it to first: Luxury watch brand fan who also has a soft side for military-style pilot’s watches and wishes they could spend at least a day training at the TOP GUN school.
>Best characteristic of watch: IWC manages to bring back a favorite in slightly more refined modern form for a new generation of watch lovers. Inclusion of in-house made movement ups the value proposition a bit, and the overall fit and finish along with materials are very high-quality.
>Worst characteristic of watch: Design manages to be uninspired at times because the theme of the piece is about utility and not flair. That is normally OK, but IWC charges a lot for the privilege. A bit more glare on the sapphire crystal than I’d like. Thick canvas-styles strap mixed with fold-over deployant clasp will not be comfortable for all wrists. I would have preferred matching black-colored metal hardware to go with the black ceramic case.