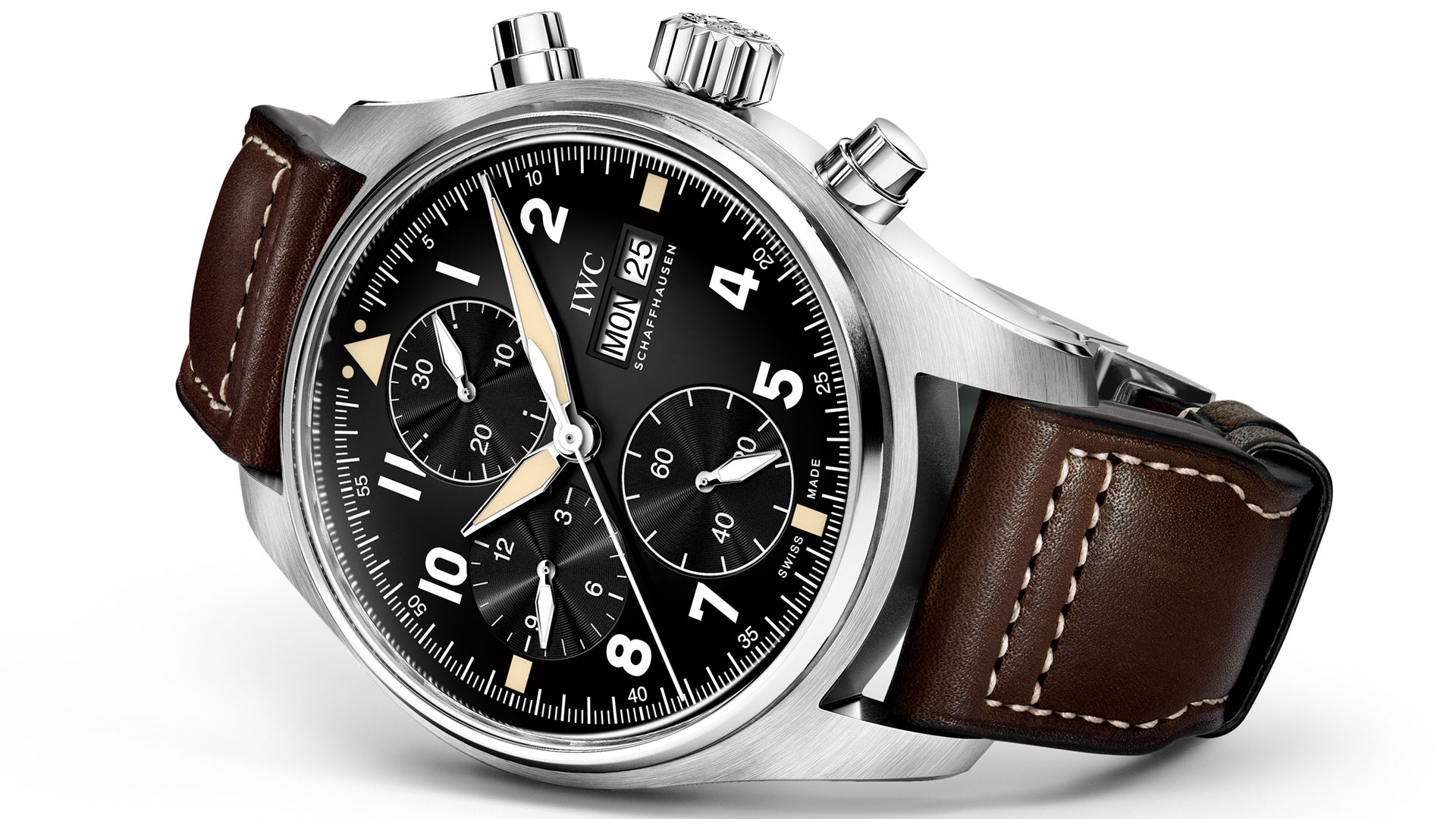 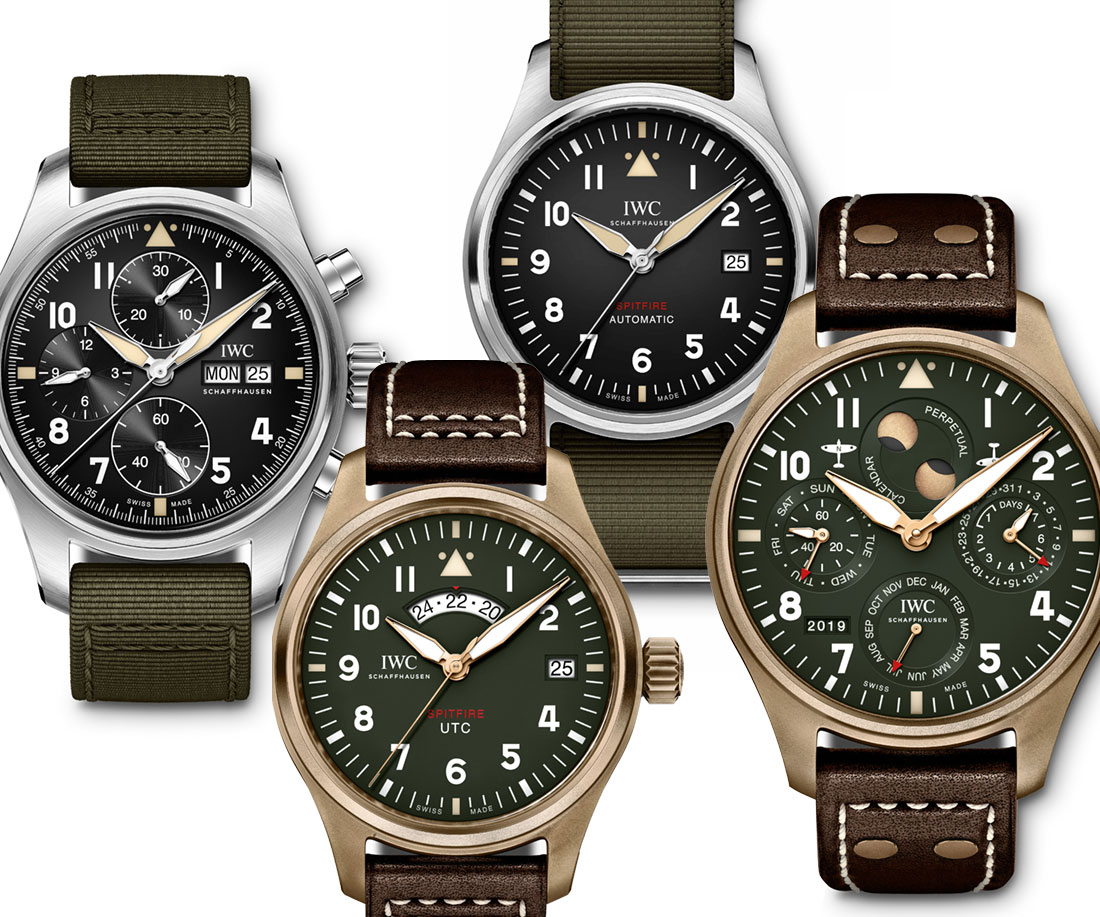 It’s clearly the year of the Spitfire over in Schaffhausen, with IWC bringing not one, not two, but seven new references to SIHH inspired by the legendary mid-century British fighter aircraft. Two of those new references we’ve already seen: the standard Pilot’s Chronograph Spitfire in bronze, and the limited edition Timezoner Spitfire with its patented time zone bezel adjustment system. The other new references discussed below are subtly updated variants of current Pilot watches in new case executions and one cool new complication, but more importantly, the new Spitfire collection is now entirely powered by IWC’s in-house manufactured calibres. 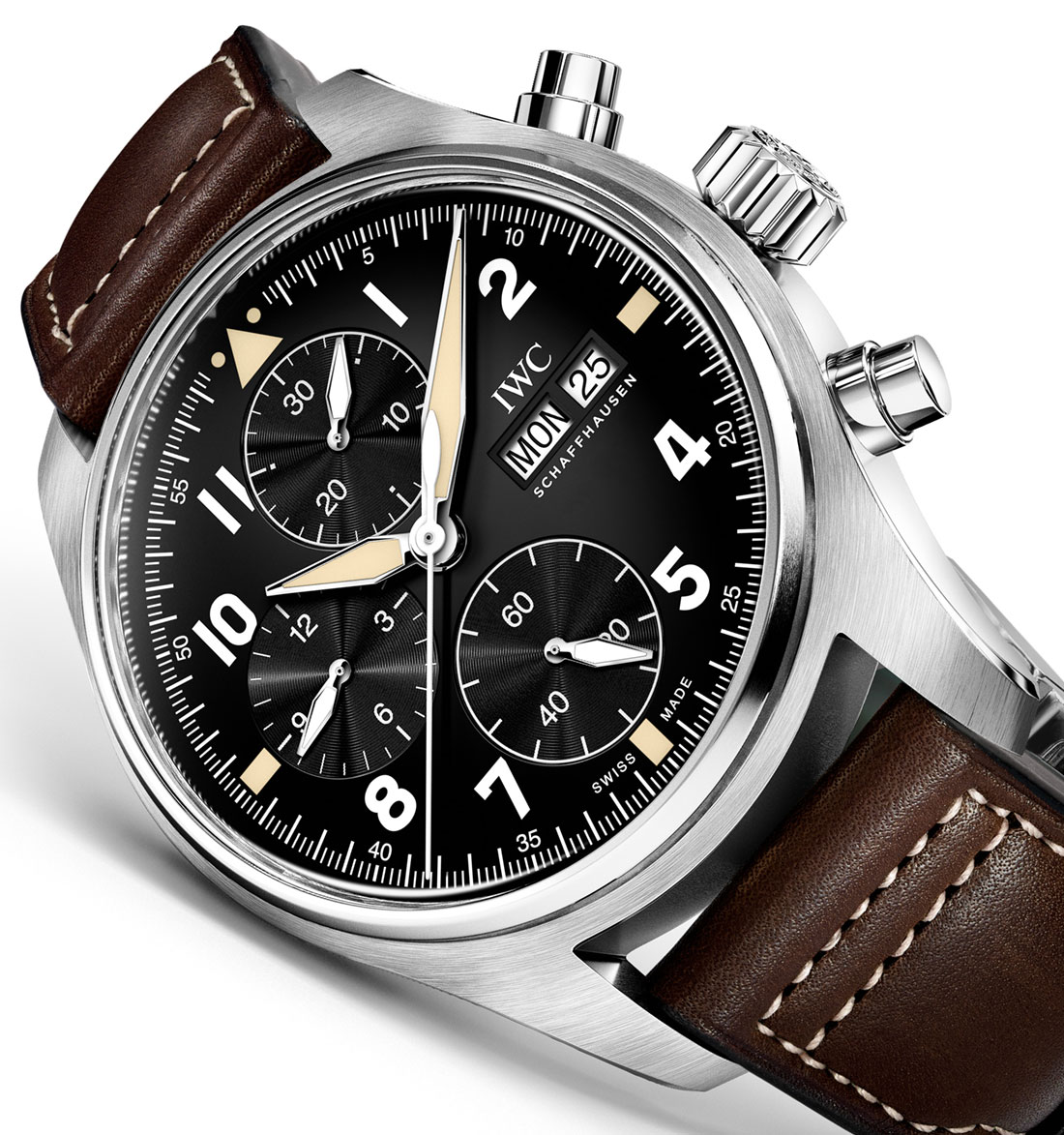 The movements are only half the story, though – these new releases also mark a pretty considerable aesthetic deviation from the long-running Spitfire collection, which for the past decade or so, has maintained a consistently dressier tone inspired by the gleaming silver exterior of the Spitfire plane itself. This year, however, IWC is eschewing those brushed silver dials and applied polished elements in favor of a traditional matte instrument dial layout borrowed from its classic Mark 11 Pilot (which would have been worn by RAF Spitfire pilots in or around 1948) all wrapped up in a new vintage-esque color palette now supposedly inspired by the interior of the Spitfire: bronze cases, beige Super-LumiNova, and olive drab green dials. Taking stock of the fresh look and feel, consider these new watches more historically-inspired, whereas past Spitfire watches were more design-inspired by the literal source material. Quite frankly, I’d argue that there’s very little about these new watches that feels distinctly “Spitfire” based purely on what we’ve been conditioned to expect from this IWC capsule in the past, but the present offerings are no less good looking, even if they might be cribbing a bit too much from the current nü-vintage trend in watchmaking. 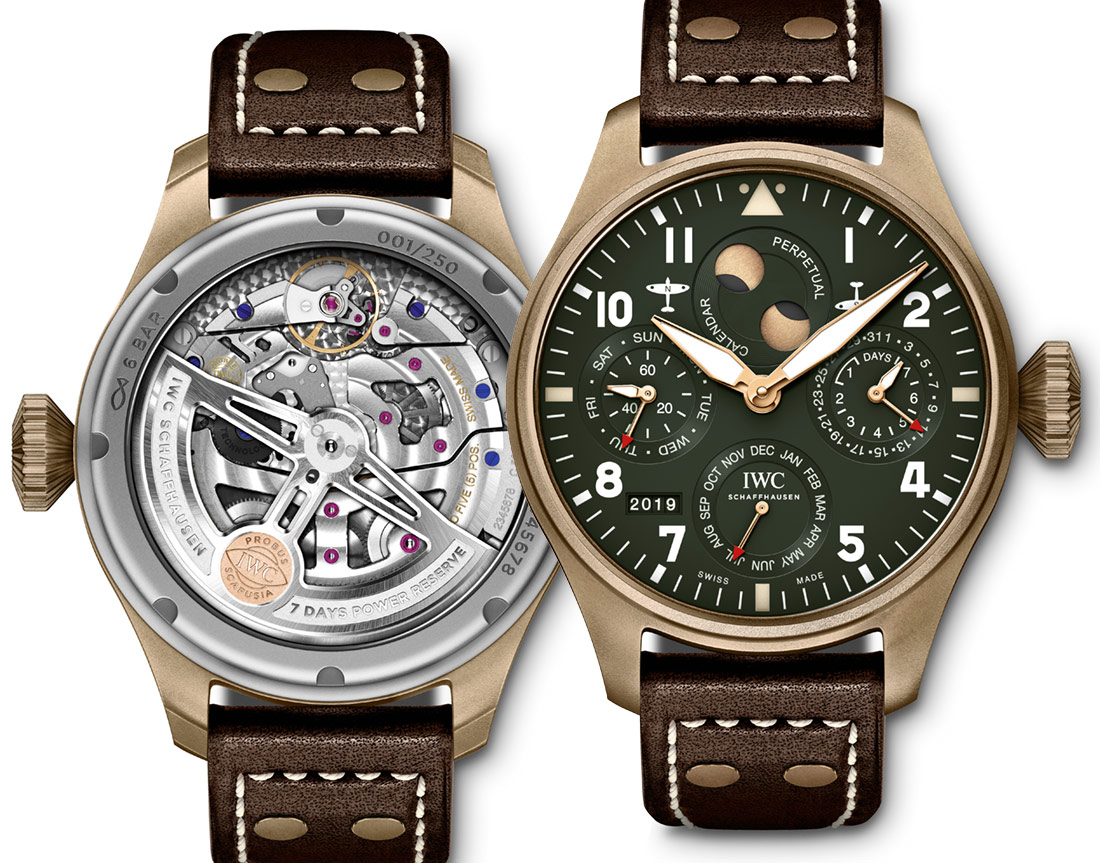 Of the five new references that we haven’t covered yet, two of them are essentially re-skinned variants of references that we have already covered. This includes the stainless steel Pilot’s Watch Chronograph Spitfire (ref. IW387901) with a 69000 calibre chronograph movement – significant, as it’s the first time IWC has deployed this movement in its Pilot’s line. With the exception of the case material and black dial, this watch is otherwise functionally identical to the bronze variant (ref. IW387902) already covered. Same goes for the new limited edition Big Pilot Perpetual Calendar (ref. IW503601) – a mirror of its stainless steel cousin in the standard line, and the flagship of the new Spitfire collection. Here, the bronze case houses cal. 52615; an impressive seven-day perpetual calendar movement that can be adjusted entirely by the crown, and maintains to-the-day accuracy for 577.5 years. 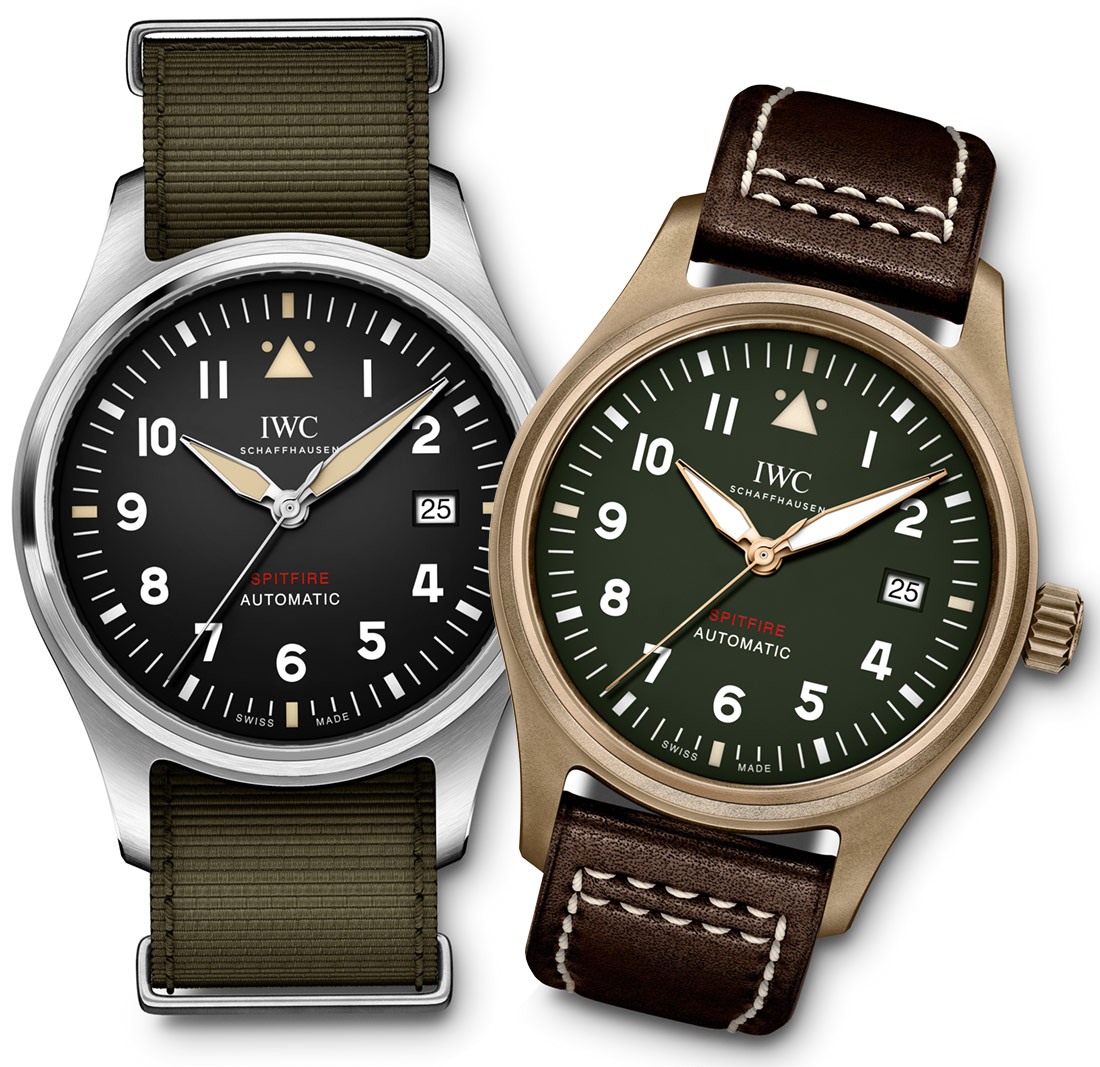 That leaves three noteworthy new Spitfire references, though two of them are, again, bronze and stainless steel mirrors of each other with the same three-hand movement execution. But what’s unique to these new three-hand pilot watches is the cal. 32110: an entirely new entry-level IWC manufacture movement. This 32000 series movement strips away some of the more premium features found in IWC’s Pellaton-winding 82000 series movements with their wear-resistant ceramic components, but it does maintain 72 hours of power reserve and features a date aperture at 3:00. It’s not IWC’s first three-hand in-house movement, but having a more economical in-house movement alternative for entry-level Pilot and Aquatimers is a smart one, ensuring their days of deploying Sellita ebauches in these watches are all but numbered. 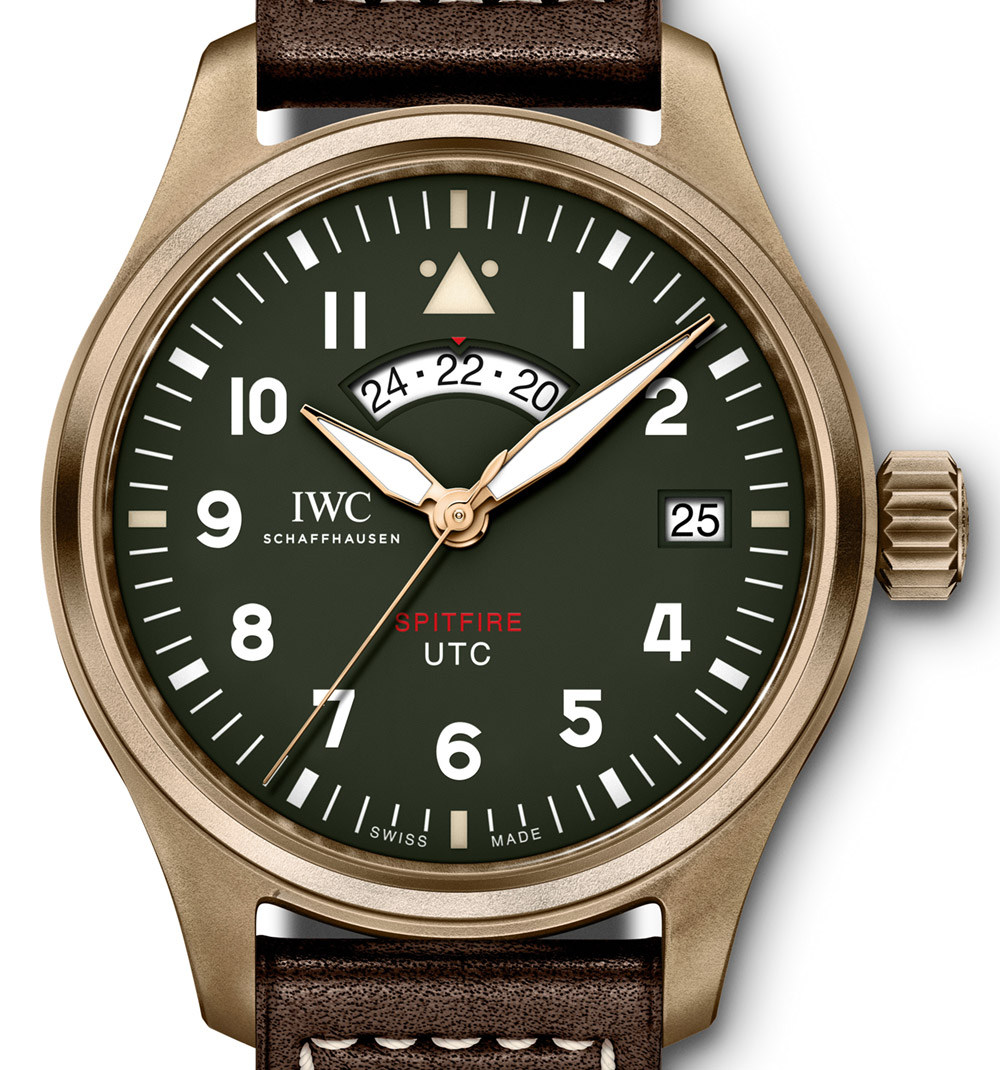 Last but certainly not least is the new IWC Pilot’s Watch UTC Spitfire Edition “MJ271” in bronze – a slightly stripped-down version of the Spitfire Timezoner, which was unveiled a little over a month ago. However, unlike the Timezoner which is functionally quite different from a traditional GMT watch, the new IWC Pilot’s Watch UTC is a “true GMT” with a 24-hour aperture cut into the dial at 12:00, and an independently adjustable hour hand, operated via the crown. Initially introduced as a standard Pilot in the early aughts, then later updated with silver Spitfire livery before being discontinued in 2012, the 3-hand UTC has long been one of the best-kept secrets in IWC’s catalog, so it’s great to see this model making a return. This new Spitfire reference piggy-backs on that functional legacy, but with one key difference: the old UTC models were based on a highly modified ETA 2892 movement, but the new reference now leans on the brand new in-house manufactured caliber 82710 (a variant of the existing 82000 movement series with ceramic cam and pawls, and the super-efficient bi-directional Pellaton winding system), which also marks the first time IWC has brought true GMT timekeeping ability to a manufacture movement. 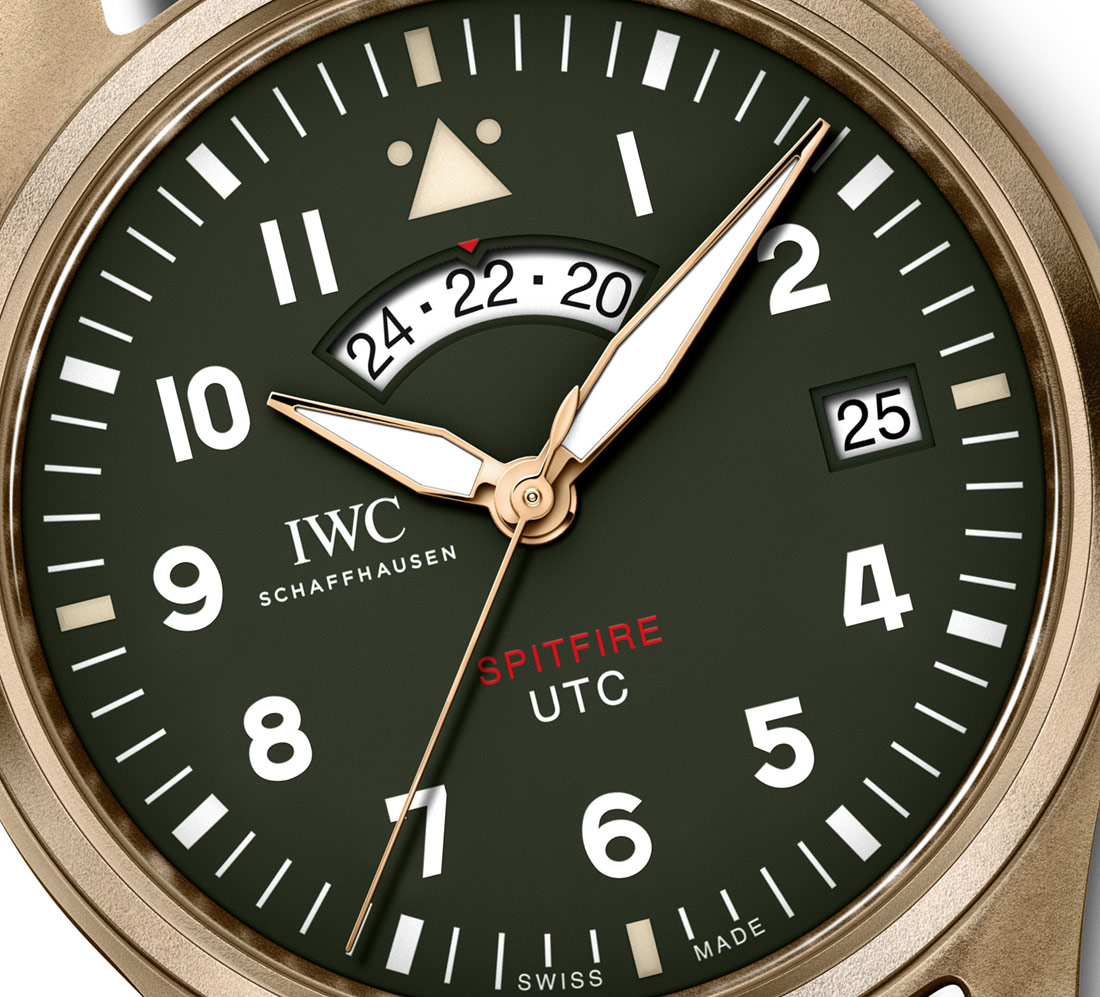