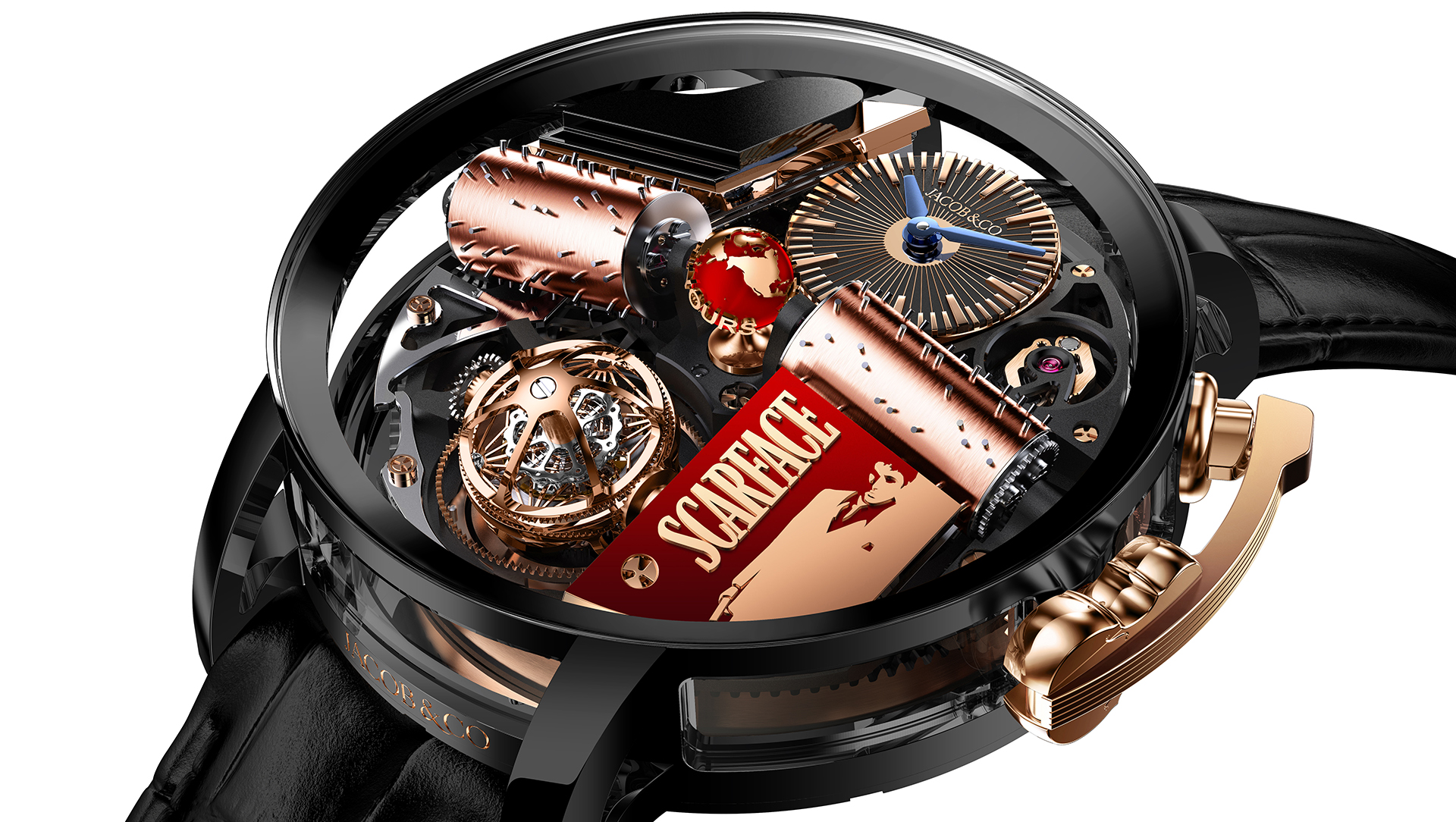 When it comes to sheer pageantry, Jacob & Co. has to be placed near the top of the current list of haute horlogerie brands. This is most vibrantly shown in the marque’s more extravagant show pieces, featuring everything from a working model of the solar system to an ornately sculpted golden dragon. One of the most memorable of these in recent years has been 2018’s Opera Godfather, combining a triple-axis tourbillon with visual cues from the classic 1972 film “The Godfather” along with a twin-barrel music box complication that plays the film’s main theme on a miniature lacquered gold grand piano. For 2020, Jacob & Co. says hello to the Godfather’s “little friend” — the limited-edition Jacob & Co. Opera Scarface. Inspired by the 1983 cult classic gangster film of the same name, the Opera Scarface revives the Opera series with a distinctly Miami flair. 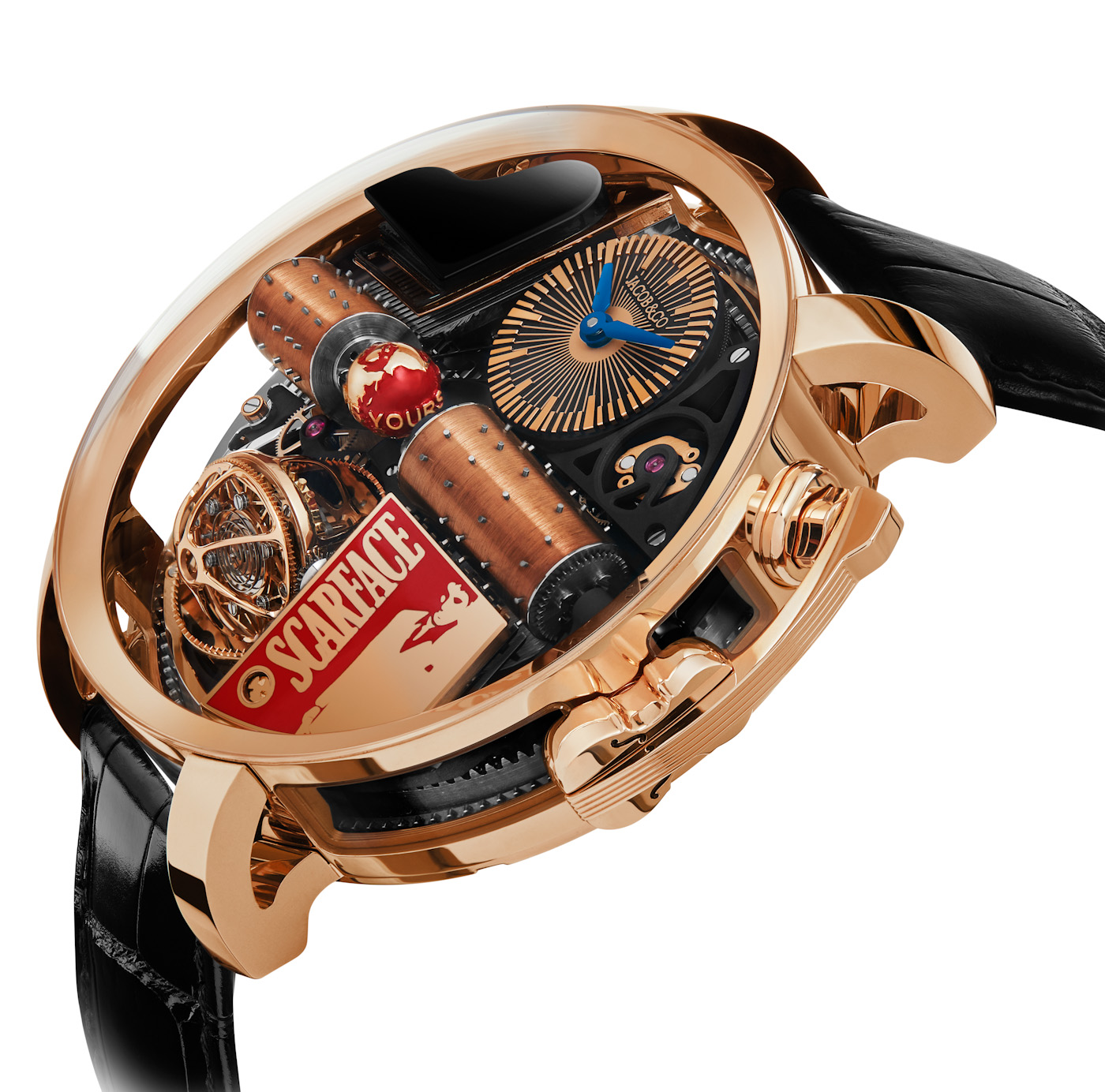 The 49mm case of the Jacob & Co. Opera Scarface is available in both 18k rose gold and black DLC-coated titanium variants, both following the same form as the Opera Godfather. This is far from subtle design, with the 23mm-thick main case taking a skeletonized approach to allow a view of the dial and movement from nearly any angle through a multi-part sapphire crystal. The main focal point of the case itself is undoubtedly the oversized rose gold violin-shaped crown at 3 o’clock. In addition to handling winding functions, the neck of this violin becomes a guard for the 2 o’clock pusher used to activate the Opera Scarface’s music box complication. Time setting is moved to a separate lift-out crown on the caseback. 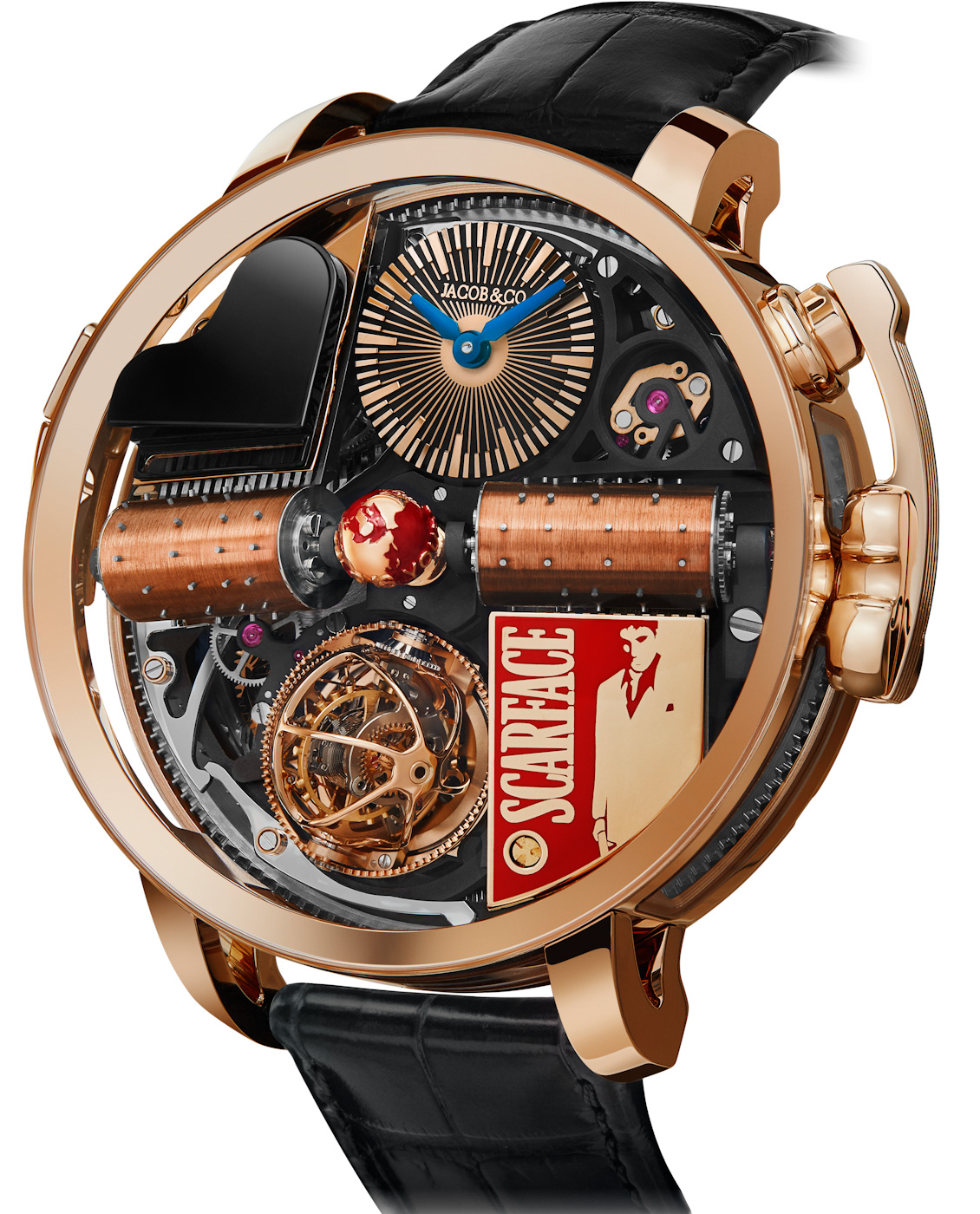 For the Jacob & Co. Opera Scarface, dial and movement more or less become one as the different complications dominate the space inside the case, while timekeeping is relegated to a small subdial at 12 o’clock. This subdial itself is attractive enough, with blued alpha hands above distinctive gold minute indices stretching all the way to the center of the subdial, but the real visual focus of the watch is in the other complications. From a horological standpoint, it’s difficult to top the mechanical spectacle of the 6 o’clock triple-axis tourbillon, with each cage counter-rotating at increasing speed. For sheer novelty value, however, the twin-barrel music box complication taking up half the total real estate of the dial is a definite conversation starter. At 10 o’clock, the playing tines of the music box are mounted under a black lacquered rose gold grand piano whose “keys” move in time with the “Bolivia Theme” from the 1983 film. At 4 o’clock, the second set of tines is covered with a rose gold and red lacquer recreation of the iconic “Scarface” poster featuring Al Pacino’s character from the film. At the center of it all, the globe from Tony Montana’s estate in the film is recreated in rose gold and red lacquer with its famous inscription: “The World Is Yours.” The overall package runs the risk of sensory overload, but the finishing on each element is undeniably exquisite.

The hand-wound manufacture JCFM04 movement is seriously impressive from a technical standpoint. For starters, there are two separate power reserves, one of the tourbillon, hours and minutes, and a dedicated reserve for the music box complication. While timekeeping sits at 42 hours of reserve, the music box can play the full 30-second, 120-note melody three times before winding is needed. In addition to the two musical barrels, when activated, the music box rotates the entire movement, subdial and all, 120 degrees clockwise around the central axis while the hours and minutes subdial rotates on its own to ensure that 12 o’clock remains properly oriented. Beyond the music box, there’s the triple-axis tourbillon, counter-rotating in three unique directions at three different speeds. The outer cage completes a rotation every 180 seconds, with the middle cage rotating once every 48 seconds, and the inner cage completing its circuit in 24 seconds. 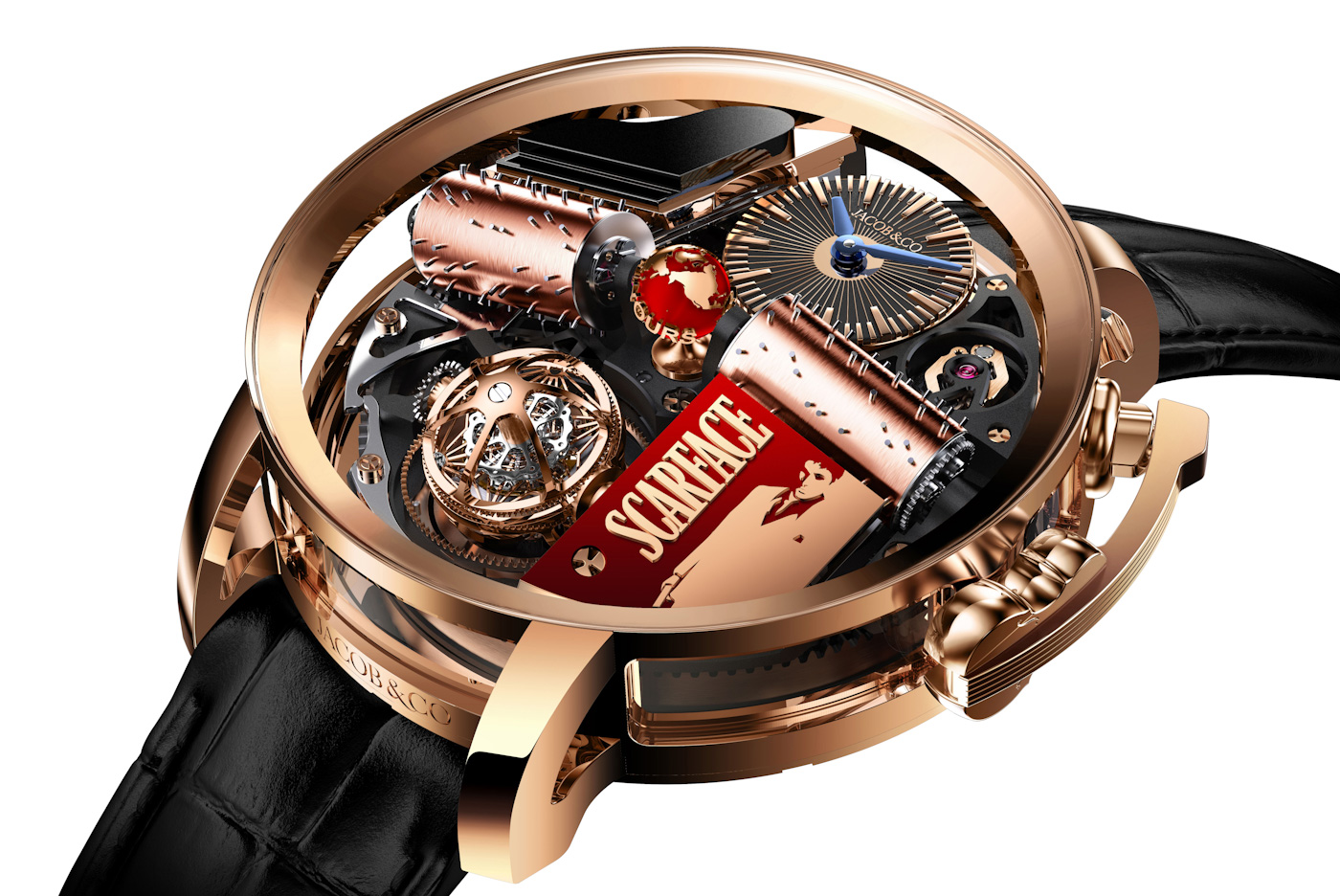 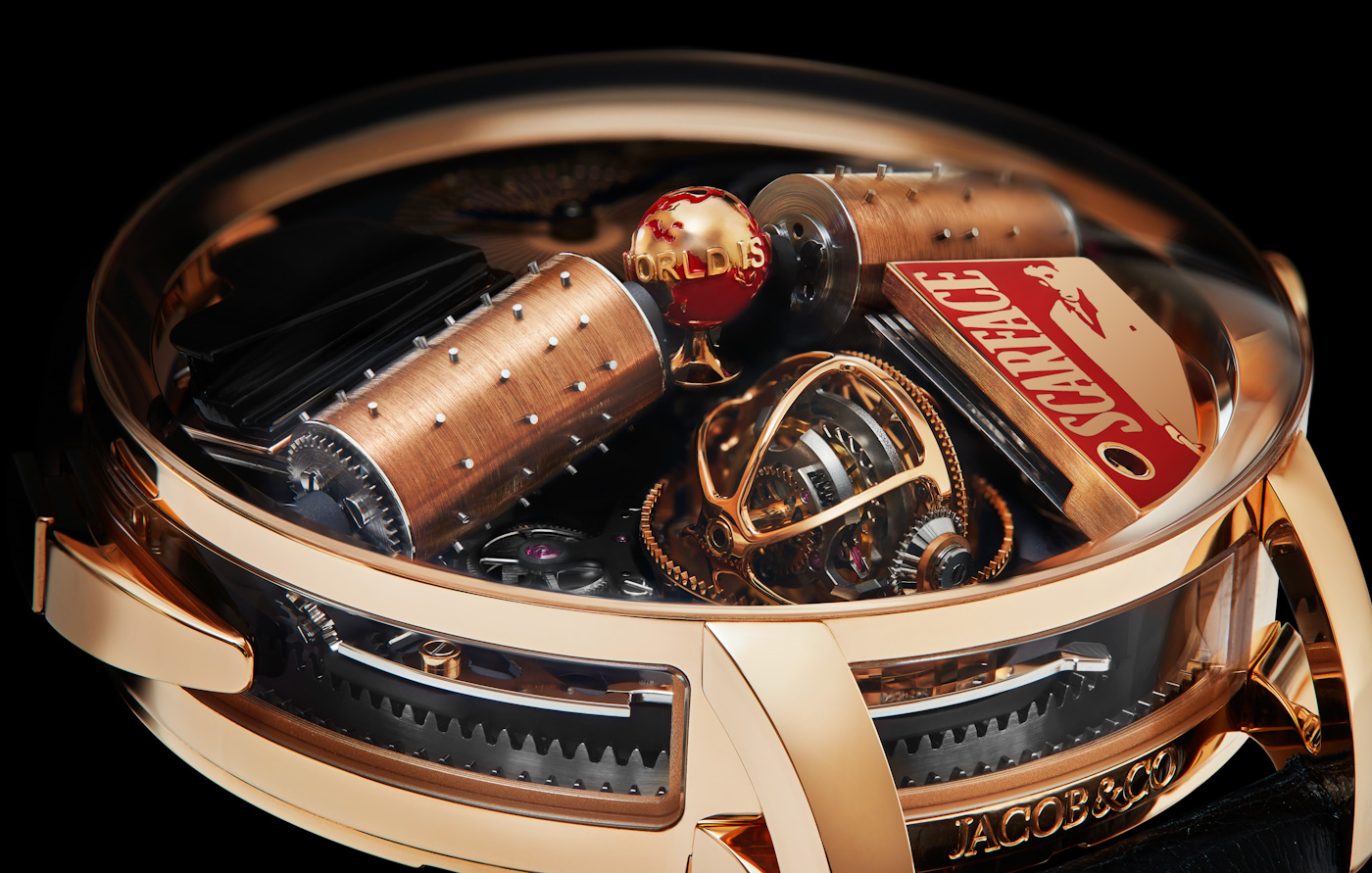