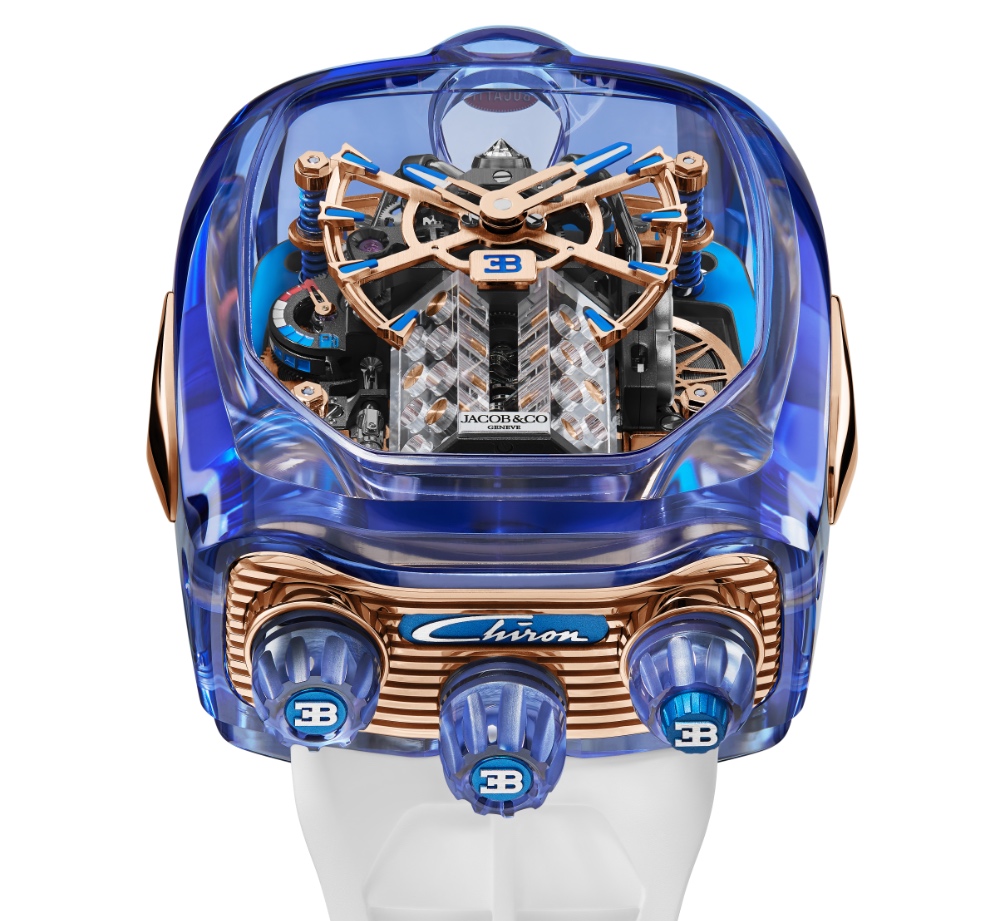 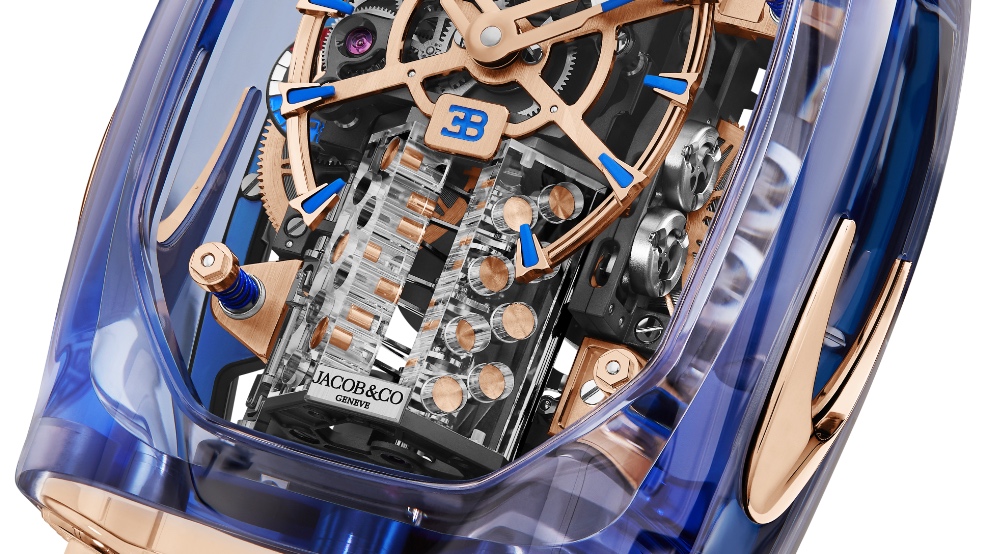 Like earlier versions, the Bugatti Chiron Tourbillon Blue Sapphire’s movement features a functioning miniature version of the W16 engine found in the Chiron; this is activated by the push-start crown. Once activated, the engine comes to life, and you’ll see the 16 pistons moving and the turbochargers spinning. Look at it in action below because it’s amazing and mesmerizing. My only complaint is that there are only two turbochargers, which is inaccurate because the Chiron actually has four. Still, having a working miniature engine is no small feat, so I’m willing to turn a blind eye to this small oversight.

Naturally, given the complexity of the movement, the case is large. You are looking at dimensions of 57.8mm x 44.4mm. It will easily dwarf many 44mm Royal Oak Offshores and 47mm Luminors and Radiomirs. The case is made entirely out of sapphire crystal, which is remarkable because sapphire is incredibly hard and, therefore, an arduous process to shape. According to the brand, it takes a crafter 120 hours to finish the case. Adding any sort of color also complicates the process because transparency needs to be maintained. Still, the end results are worth it because it provides the lucky owner with an unfettered view of the movement and miniature engine within.

As with earlier versions of the Bugatti Chiron Tourbillon watch, time is read on a skeletonized subdial at 12 o’clock. It features blue and gold accents and sits just underneath the tourbillon. The blue and gold color treatment extends to the crown and pushers, which are made out of sapphire crystal and 18k rose gold. 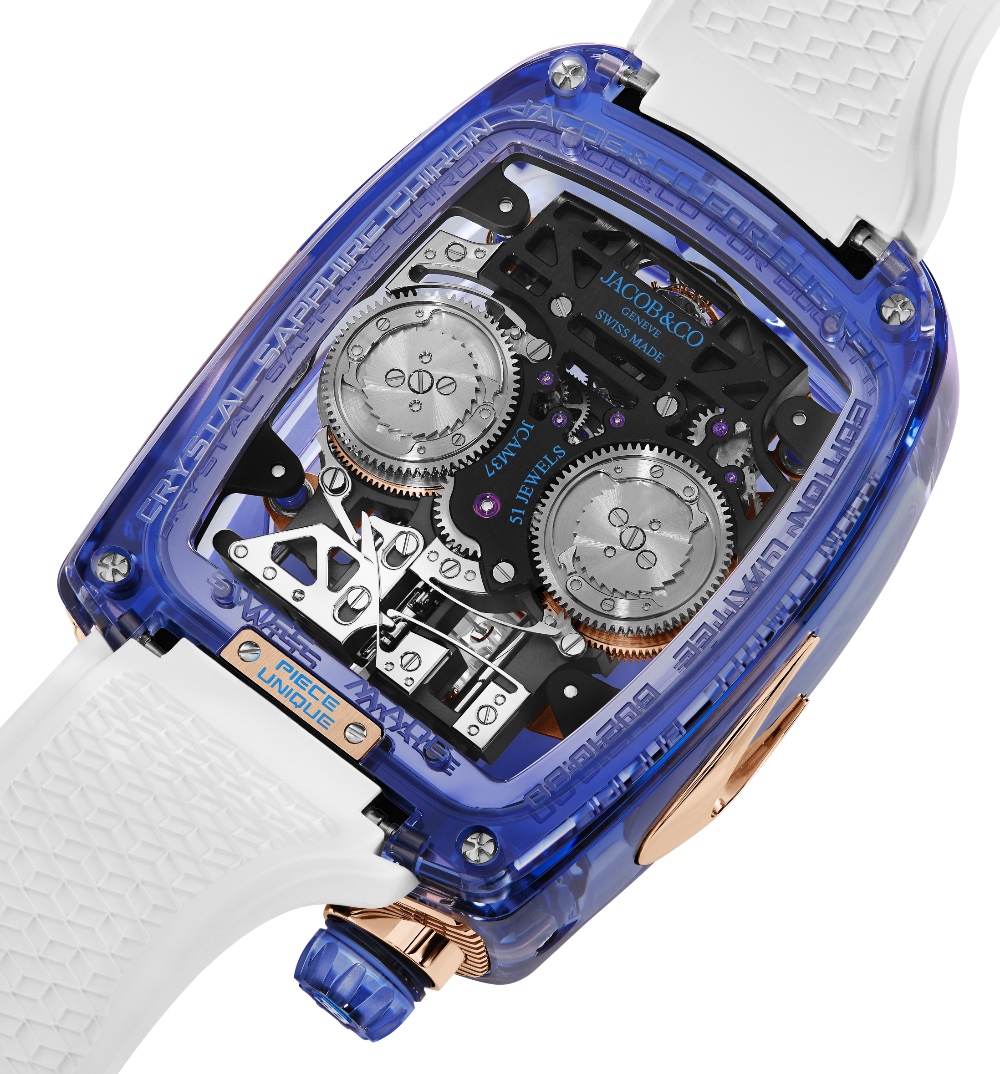 The movement within is the calibre JCAM37. It’s a hand-wound movement that consists of 578 components. It has two barrels and a power reserve of 60 hours. The tourbillon makes one revolution every minute and has a beat rate of 3Hz. As you’d expect from a watch this exquisite, the movement is assembled and decorated entirely by hand. Furthermore, it is mounted on four shock absorbers that have been styled to look like suspension dampers from a car. Doing so not only protects the movement from shocks, it also means that it is floating within the case. Another nifty thing about the movement is that it has a power reserve display that looks like a fuel gauge.

There’s no denying that this is a visually exciting watch. And because it’s a pièce unique, it’s probably going to be the one Chiron owners want the most. The Chiron owner who wears this will likely be the talk of the Chiron Owners Club. Not surprisingly, this is also the most expensive version of the Bugatti Chiron Tourbillon watch. The Bugatti Chiron Tourbillon Blue Sapphire is $1.5 million. For more information, visit Jacob & Co.’s website.