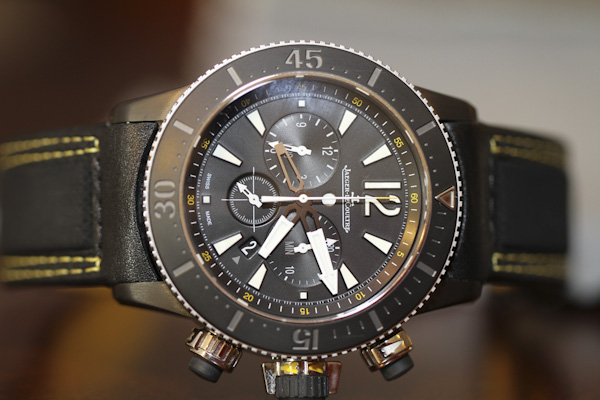 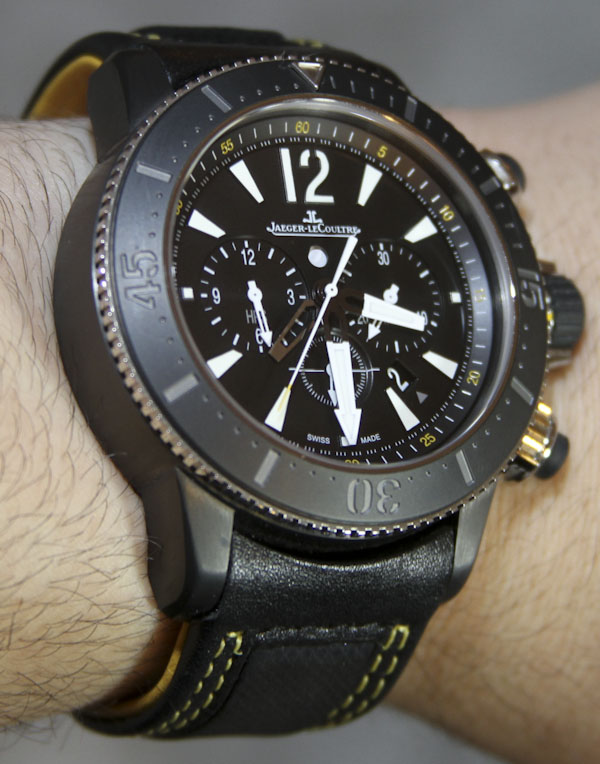 Ask anyone interested in quality mechanical watches and they will tell you that Jaeger-LeCoultre makes a fine timepiece. Through its rich history, the brand has succeeded in almost universally having watch fans get excited about their movements and quality.

Jaeger-LeCoultre has achieved the difficult task of setting a high bar for itself mechanically. The next step after that was to capture the hearts of as much of the watch lover market as possible. That was the more difficult part. JLC gained a lot of popularity with their more formal iconic pieces such as the Reverso and classic Master Compressor. That wasn’t enough for them. Several years ago Jaeger-LeCoultre decided to double its efforts in the popular high-end sport watch market as well.

Then the Jaeger-LeCoultre Navy SEALs watch was borne. The idea was that JLC would work closely with United States Navy SEAL soldiers to design and develop watches that would live up to their expectations in training and combat. The hoped result would be super cool watches with famous Jaeger-LeCoultre movements inside of them that every guy wanted to have. Especially since it was “performance tested and designed,” versus just made in a design studio. With a goal like that JLC again set the bar very high. The evolved Master Compressor watches in the Navy SEALs collection certainly do get a lot of attention, and are worth looking at whether you want to be like the Navy SEALs or not.

I didn’t have a lot of experience with this collection before the review, but after wearing this amazing watch for a while I am sold on the execution and really like this piece. I’ve talked with JLC a lot about their work with Navy SEALs and the feedback they get. The joke among collectors is always that no Navy SEALs guy wearing a JLC can afford one. That may be true, but at least Jaeger didn’t make them pay for the watches. Soldiers just get too many perks I tell you. 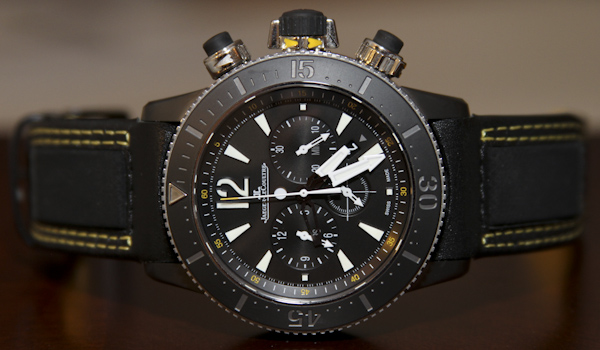 About a year or two ago there was a smaller 42mm wide version of the Master Compression Navy SEALs released that I discussed here. The reason for this smaller model was because it was demand by the SEALs themselves. That is amusing because most of the pieces are larger, with the chronograph I tested coming in a 46.3mm wide case – I love the big size. Though you all should know by now how much I appreciate larger watches.

46.3mm can wear either larger or small, in this case it wears comfortably and does not feel massive. This is not a small watch though. This version of the watch is in titanium with a gray PVD coating over the most brushed metal. Steel is used for parts of the outer bezel as well as Master Compressor style locks on the crown and pushers. Most of the bezel is dark gray matte ceramic with the numerals and markers sharply engraved in its surface. There is an applied steel triangle at the 60 minute marker on the bezel. 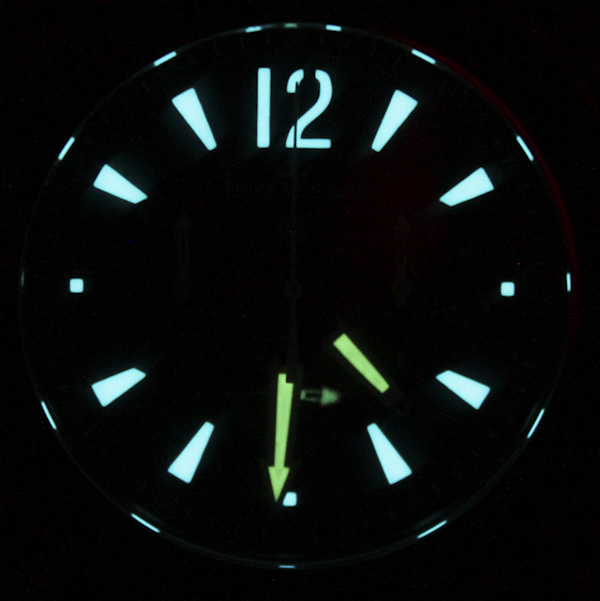 The mixture of steel, ceramic, and titanium feels satisfying. Jaeger has achieved a very aggressive look that is also legible, classy, and masculine. It is a very good execution of a modern sports watch with a Swiss level of refinement.

For this watch Jaeger-LeCoultre offers 1000 meters of water resistance. You rarely find chronograph watches with that much durability. Now I know why “Diver” is part of the name of the watch. The high level of water resistance is aided by the special crown and pusher lock system unique to Jaeger-LeCoultre. If you aren’t familiar with the system, here is how it works; you twist the lock around the crown or pusher to lock the piece or allow it to operate. This is in contrast to a screw-in system, though they functionally work is the same way. This system is however more convenient and you’ll end up appreciating it. The crown and pushers themselves are rubber coated.

Lovers of Jaeger-LeCoultre’s various Master Compressor watches from the last few years will feel right at home here. Though I dare to suggest that the dial is a bit more aggressive and legible in this model. The hands and hour markers are bold and offer with a high level of contrast compared to the dial. There is thick and bright lume all over the dial. The second time-zone hand is non-lumed. This is a bit of a trade-off design decision actually. Not luming it allows it to be visible, but not distracting when looking at the time. I have to say that overall I prefer this style of second time zone hand integration as opposed to one that visually competes with the main hour hand. What JLC did was brush the top of the hand to offer very good visibility when you are looking for it -though it doesn’t get in the way when you want to only look at the time. Going back to the lume for a moment, you’ll find that JLC uses different colors of lume for the hour and minute hand to enhance visibility is murky conditions. 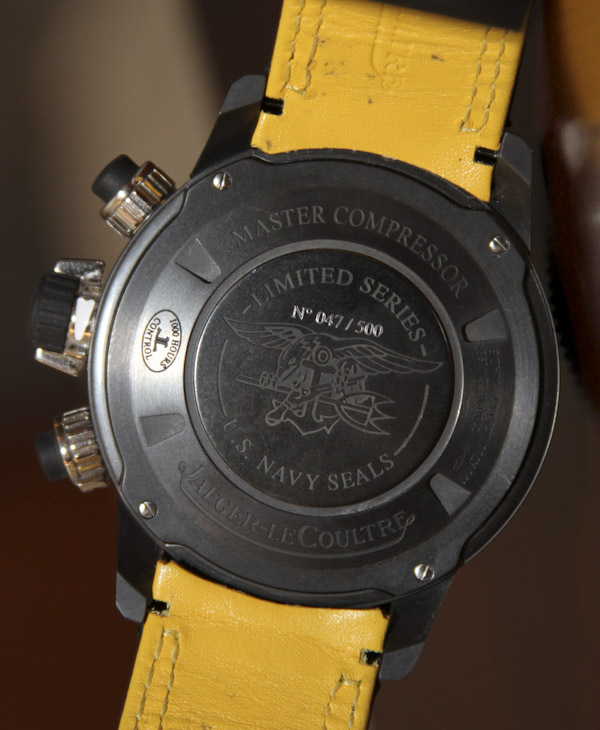 In addition to the black and white tones JLC adds yellow as a trim color. You see it on the minute scale on the flange ring, at the tip of the chronograph seconds hands, and on the strap. While this is a super diver watch, the strap is meant for more terrestrial use. I recommend using something like a rubber strap if you are going to be using this piece underwater.

The strap on the watch is pretty slick and grew on me quickly. Jaeger-LeCoultre designed it from a few materials and colors. The inner lining is yellow while the outside is black. Most of the strap is calfskin leather. I like how the strap ends have give to them, but are also designed to curve with the shape of the case. 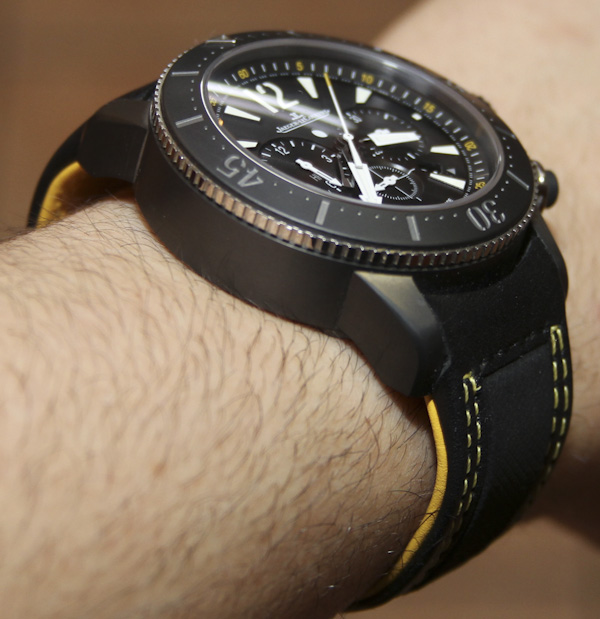 Over the dial is an AR coated domed sapphire crystal. There is of course glare because it is domed, but not much, and legibility is always high. In addition to the 12 hour chronograph is a second time-zone function. I don’t personally use the term GMT because that hand is a 12 hour, versus 24 hour hand. Though you’ll notice in the name of the watch that Jaeger does call it a “GMT” watch. There is a neat little feature that tells you whether it is AM or PM in the second time zone. This is done with small day/night indicator window under the Jaeger-LeCoultre logo under 12 o’clock. Nice system right? Overall the watch has the time, two time zones, the date, and chronograph. A lot of healthy functionality here, and in addition to being a good sports watch, it is a great traveler’s watch. 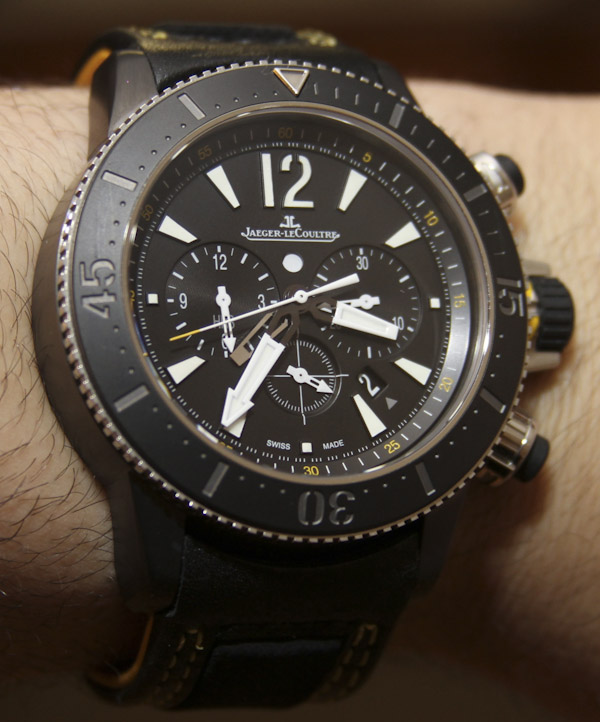 Inside the Jaeger-LeCoultre Master Compressor Diving Chronograph GMT Navy SEALs is a Jaeger-LeCoultre in-house made and designed caliber 757 automatic movement. The watch contains two barrels with 65 hours of power reserve and it operates at 28,800 bph. The longer power reserve is a nice feature and I found it to be both accurate and easy to operate. Then again, it is a Jaeger-LeCoultre movement. As an inherently fancy tool watch the Master Compressor Diving Chronograph GMT Navy Seals does not disappoint. Aside from the special Navy SEALs engraved caseback, I didn’t find myself ever thinking about the Navy SEALs connection very much. It just wasn’t necessary as I was preoccupied with enjoying the watch. One of the things that I’ve know Jaeger to focus on is functionality much more so that some of their competitors. It feels a lot like a watch brand made by people who love and know watches.

As a larger sport watch the Master Compressor Navy SEALs collection of pieces aren’t cheap, but they are not ridiculous in price for what you get. They look good and work well, suitable for being a reliable daily wear. Many of them are limited editions such as this model which is limited to 500 pieces. Price is about $13,400 for this Jaeger-LeCoultre reference 178T471 watch.