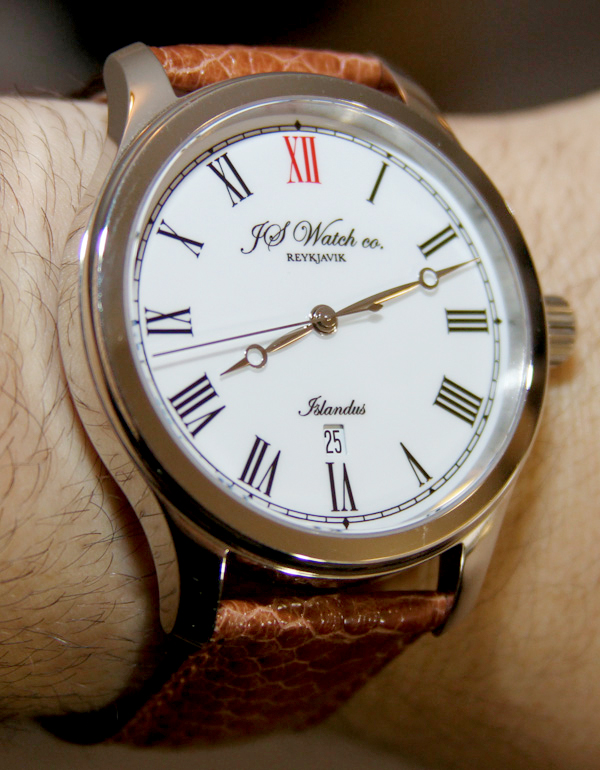 Growing up, I knew Iceland as the place whose name seemed to be juxtaposed with Greenland (as it was the warmer of the two) and the home of Bjork (whose music videos I did not then or now understand). I later learned that they also have attractive women, a rather dark history with Europe’s financial crisis, and at least one really top notch video game maker. They also make watches. Iceland has one true watch maker and it is JS Watch Co based out of none other than the capital city of Reykjavik. So here is a review of their Islandus 44mm watch, which according to the brand is a timepiece collection named after a Icelandic self-proclaimed genius named Solon Islandus.

Out of the box, the Islandus struck me as being well-sized and certainly classic. “Nice watch,” I thought to myself as I considered who else might appreciate the classic looks. The people behind the brand don’t see this as a watch for old timers, but more fashion-forward types who like conservative timepieces from an underdog brand located in a faraway place. There are a few versions of the Islandus as well. This one is big as I like it and 44mm wide. 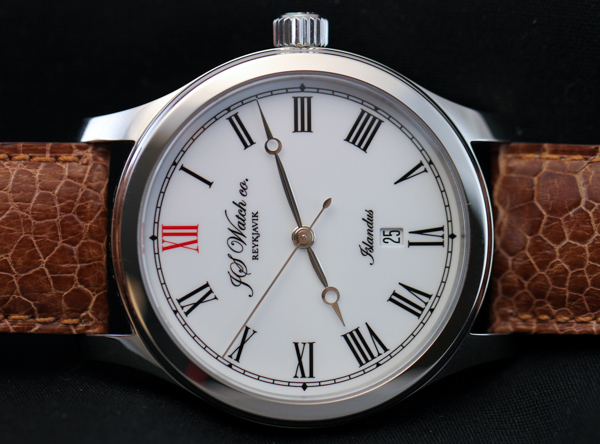 38mm-wide versions of the Islandus are also available, as are models with manually wound movements and various different dials. I liked the white dial with the black Roman numerals because it looks the most traditional to me. There is a good looking model with a black dial but with hands like this, I shy away from watches with black dials as there is a tendency for the hands to blend in with the dial. Not saying that is the case here, but it happens enough for me to be wary. So for me it was the 44mm wide automatic Islandus with the “pocket watch” style dial.

While the dial is less than original, JS Watch renders it smoothly. For instance, symmetry is approved in their placement of the date window at 6 o’clock, and the red 12 o’clock indicator is a nod to popular turn-of-the-20th-century field watches. The hands are “pomme” or Breguet style and while thin, are appropriately sized. 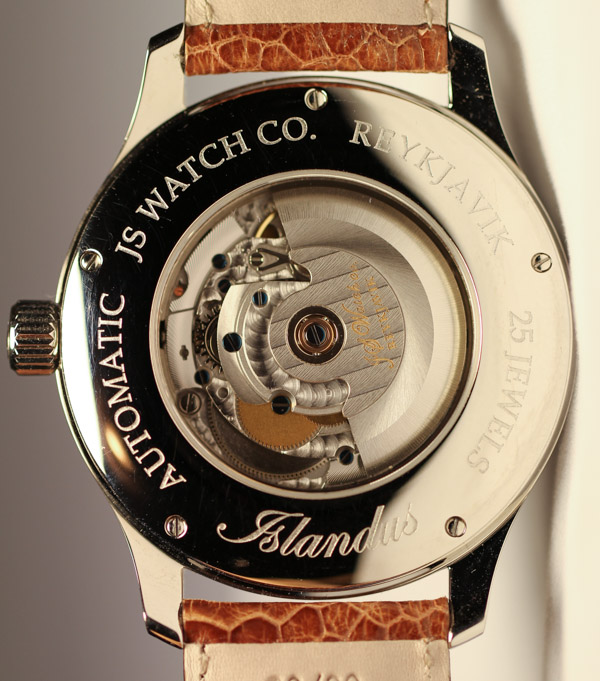 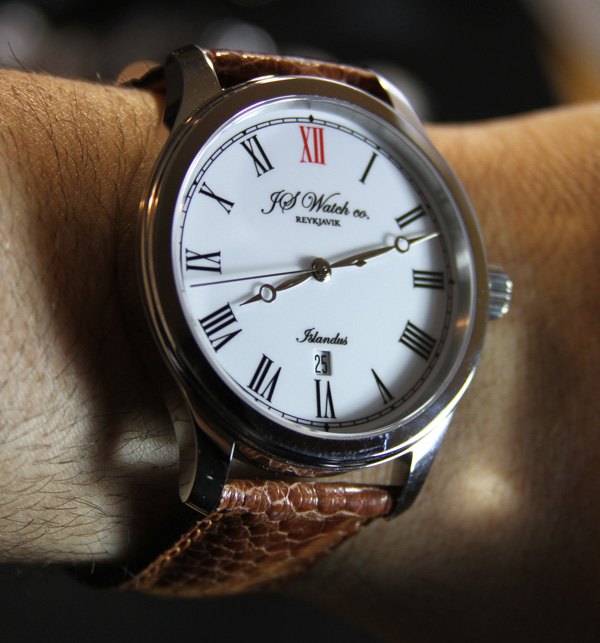 The overall effect is a watch that looks vintage without feeling too much like an old-timer’s watch. Though you can’t shake the conservatism from the watch. One thing I was curious about was the letter “G” on the crown that made me think of Google. I purposefully didn’t ask JS Watch what it was about as I wanted to guess. I think it refers to the last name of the brand founder, who is Sigurdur Gilbertsson.

Aside from that, the design and concept of the watch is very straightforward. It is a simple watch to discuss because very little needs to be explained. I will however discuss (in brief) a question that came up in YouTube after we released the video review component of the Islandus review. I mentioned that JS Watch uses elaboree (“execution top”) grade movements in their watches, and that those movements cost more than the entry-level kits from ETA. 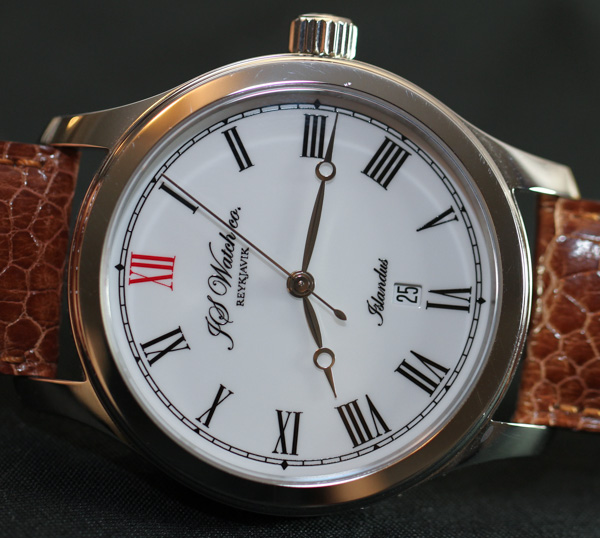 This Islandus 44mm watch includes a Swiss ETA 2824-2 automatic movement. Though, it is the top grade version of the movement which means something else than the basic 2824 caliber. So what is different? Well first is material and finishing. The parts are made better and there is a lot of noticeable finishing and decoration enhancements on the top grade pieces. Second is the oils and lubricants. This helps the parts work together better and last longer. In a nutshell, these higher-grade version of the stock ETA movements are better made, nicer to look at, and designed to last a bit longer.

One of the nicest features of the Islandus 44mm is the honey brown alligator strap. I actually mistook it for ostrich given its textures, but this is indeed a cut of alligator. The straps is not at all too stiff and very comfortable. I really don’t care much for super stiff straps that you need to break in and prefer these much more. JS Watch pieces are not terribly expensive, good looking, and easy pick-up-and-go classic looking watches. If you find the Iceland connection neat then that is a plus as well. Price starts at 2,250 Euros, but for non-Iceland residents the price is 1,800 Euros without the 20% VAT. jswatch.com

Necessary Data
>Brand: JS Watch
>Model: Islandus 44mm
>Price: 1,800 Euros for most people
>Would reviewer personally wear it: With the right outfit
>Friend we’d recommend it to first: A classical guy with a vest in his wardrobe and a thing for Norwegian off-shoot countries.
>Best characteristic of watch: Well-sized for a traditional style watch. Good strap.
>Worst characteristic of watch: Could be considered a bit ho-him for those interested in more contemporary designs.

Thanks to JS Watch for the review unit. Opinions are 100% independent.
Advertising Message