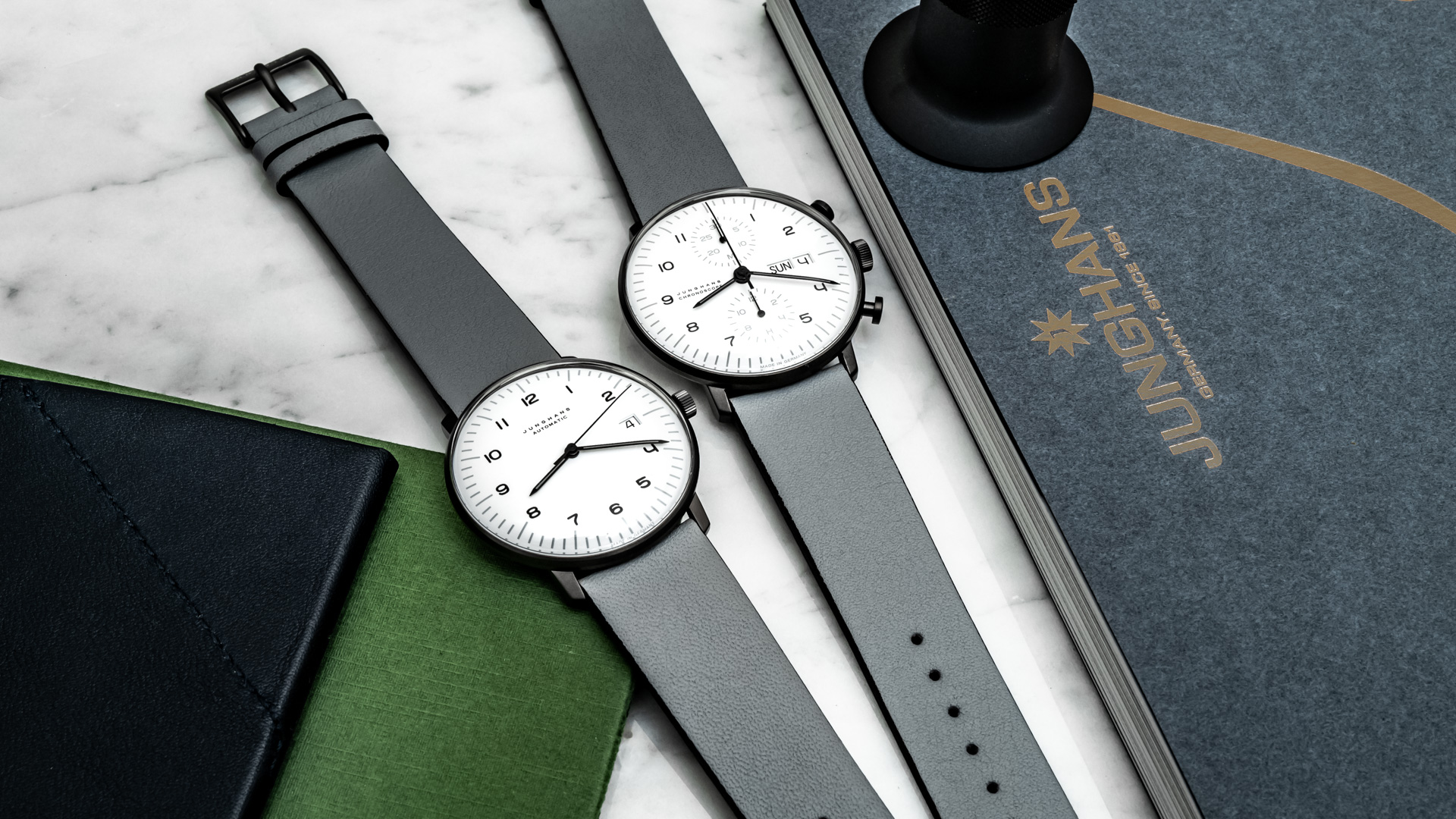 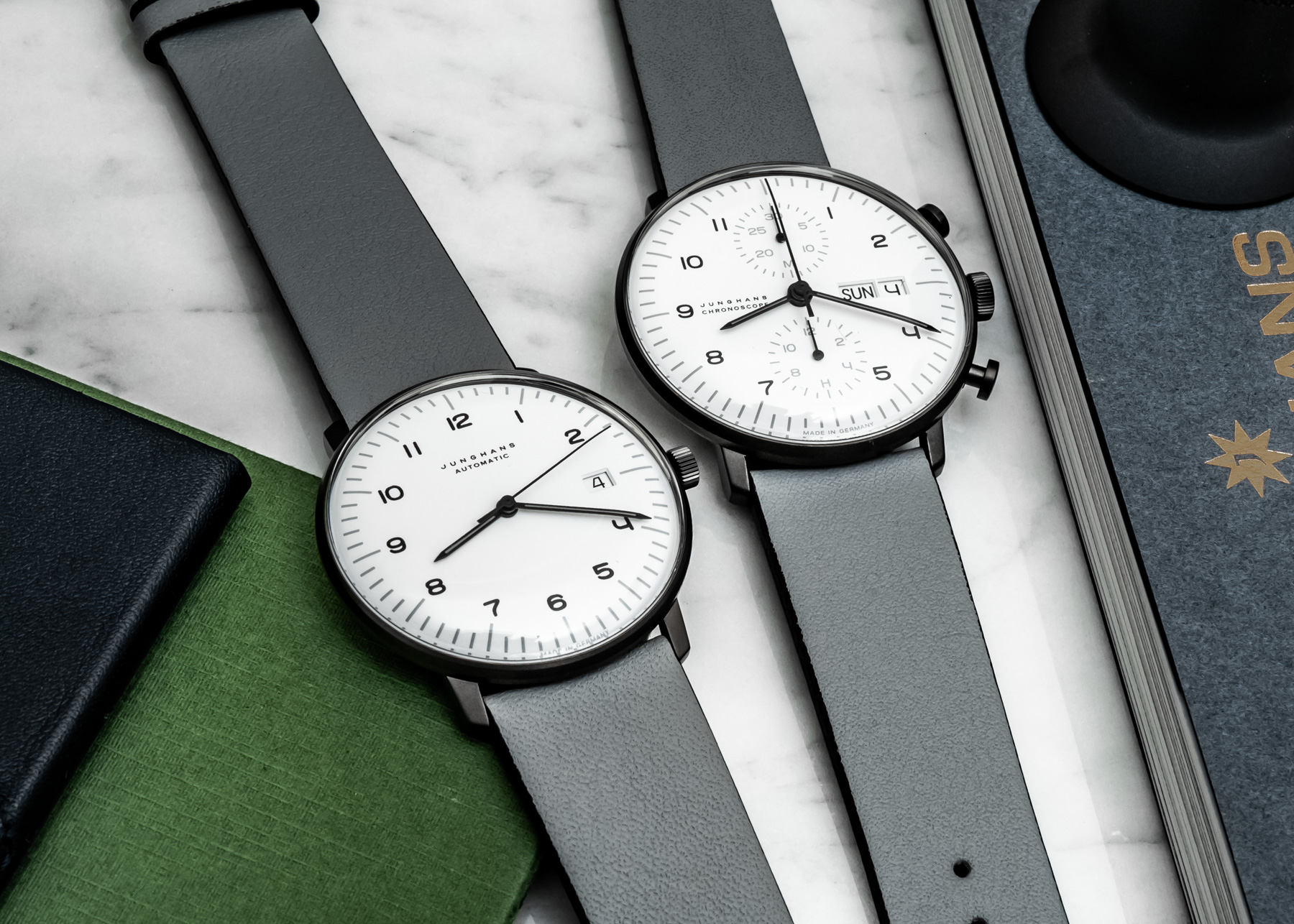 Originally established in 1861, Junghans has been quietly producing outstanding watches in Germany’s Black Forest for over a century and a half, transforming the sleepy towns near Schramberg into a haven for watchmaking. At the turn of the 20th century, Junghans was the largest watch and clock factory in the world, exporting over three million timepieces each year. Over the following century, the brand would continue to expand and diversify, creating chronographs for the German military, introducing a host of new calibers, and producing the first German quartz watch in 1970. However, it was Junghans’ collaboration with the famed Swiss architect and designer, Max Bill, in the late 1950s that would come to define the brand’s signature line. Featured here, the Junghans Max Bill Chronoscope and Automatic Black and White are monochrome releases that showcase Max Bill’s timeless, minimalist style. 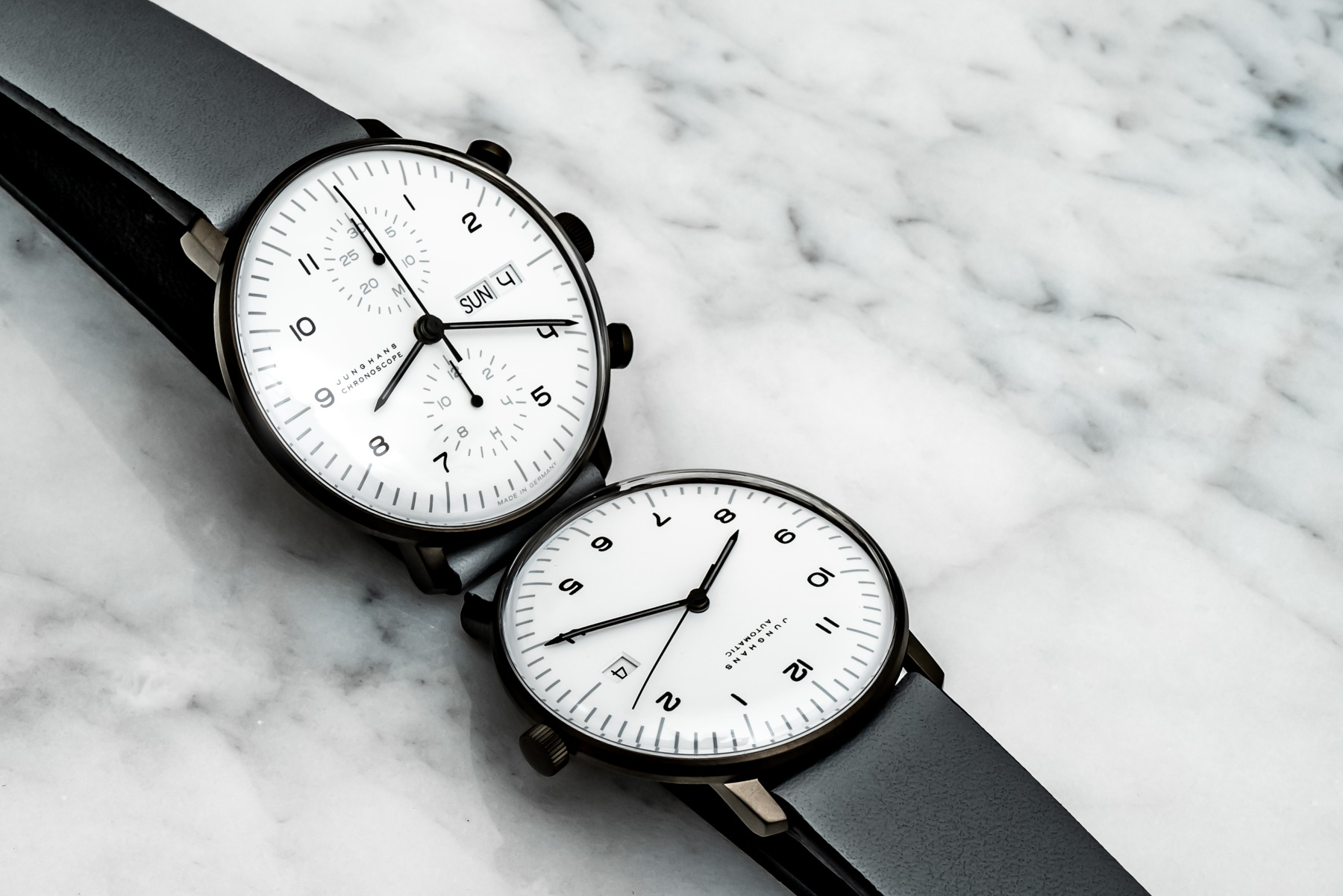 Max Bill was a Swiss architect and designer whose aesthetic sense and signature minimalist style was molded, in part, by his time studying at the Bauhaus in Dessau, Germany, and learning from artistic giants such as Wassily Kandinsky and Paul Klee. Throughout his career, Max Bill had an oversized influence on Swiss graphic and architectural design. Appreciating Bill’s virtuosity, Junghans partnered with Max Bill and eventually commissioned him to design a line of watches that epitomized his distinct style – one that emphasized precision and clarity of design. 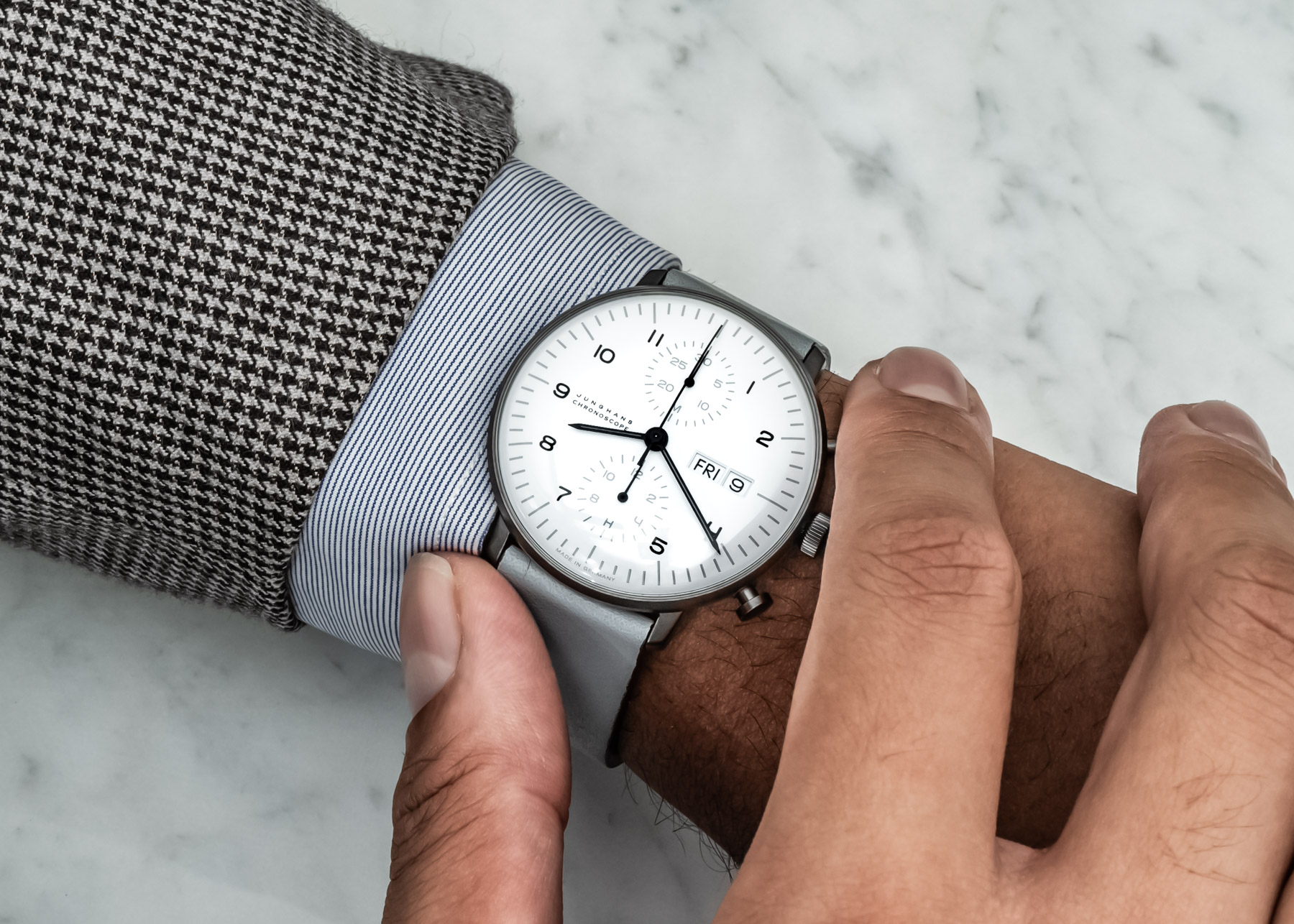 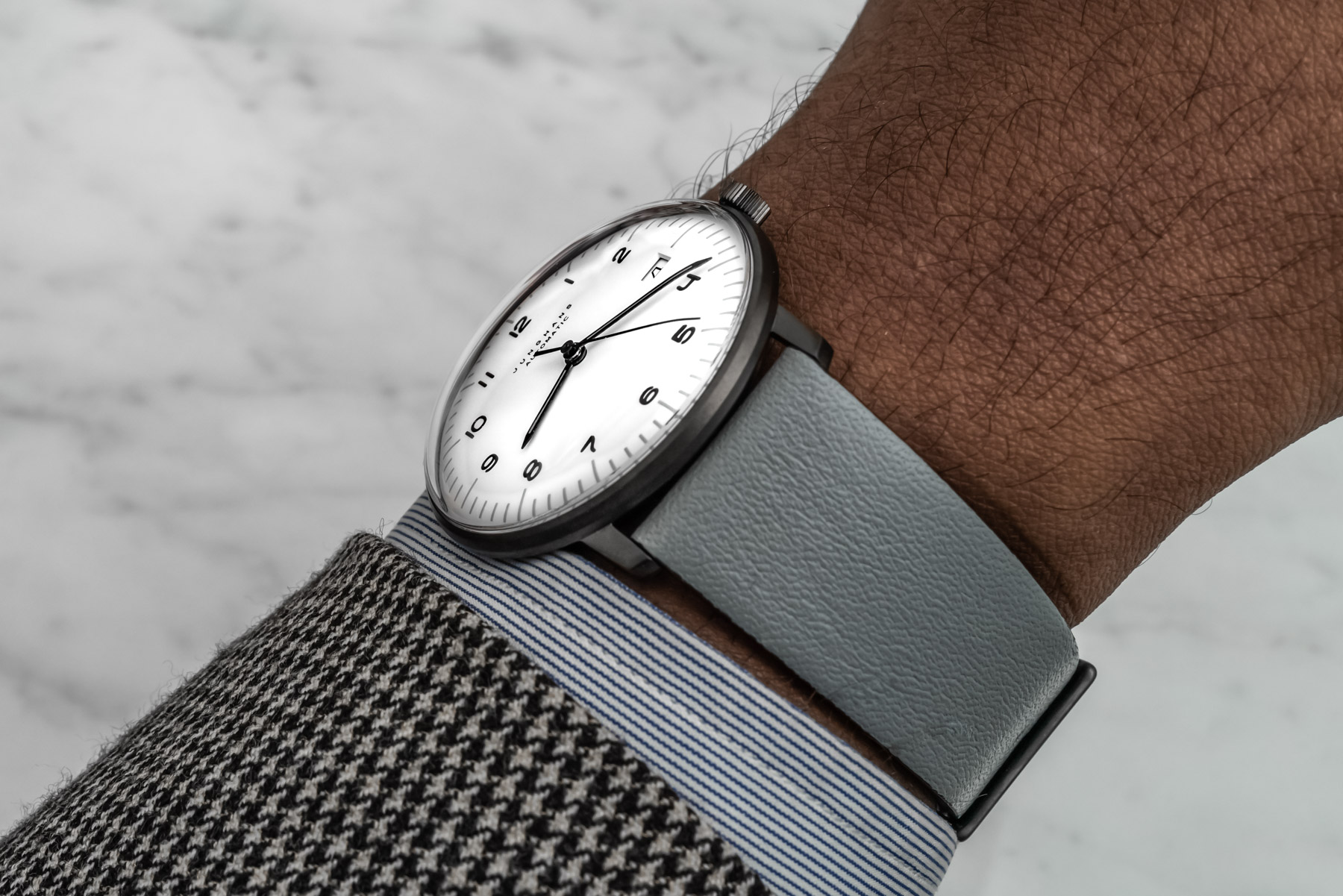 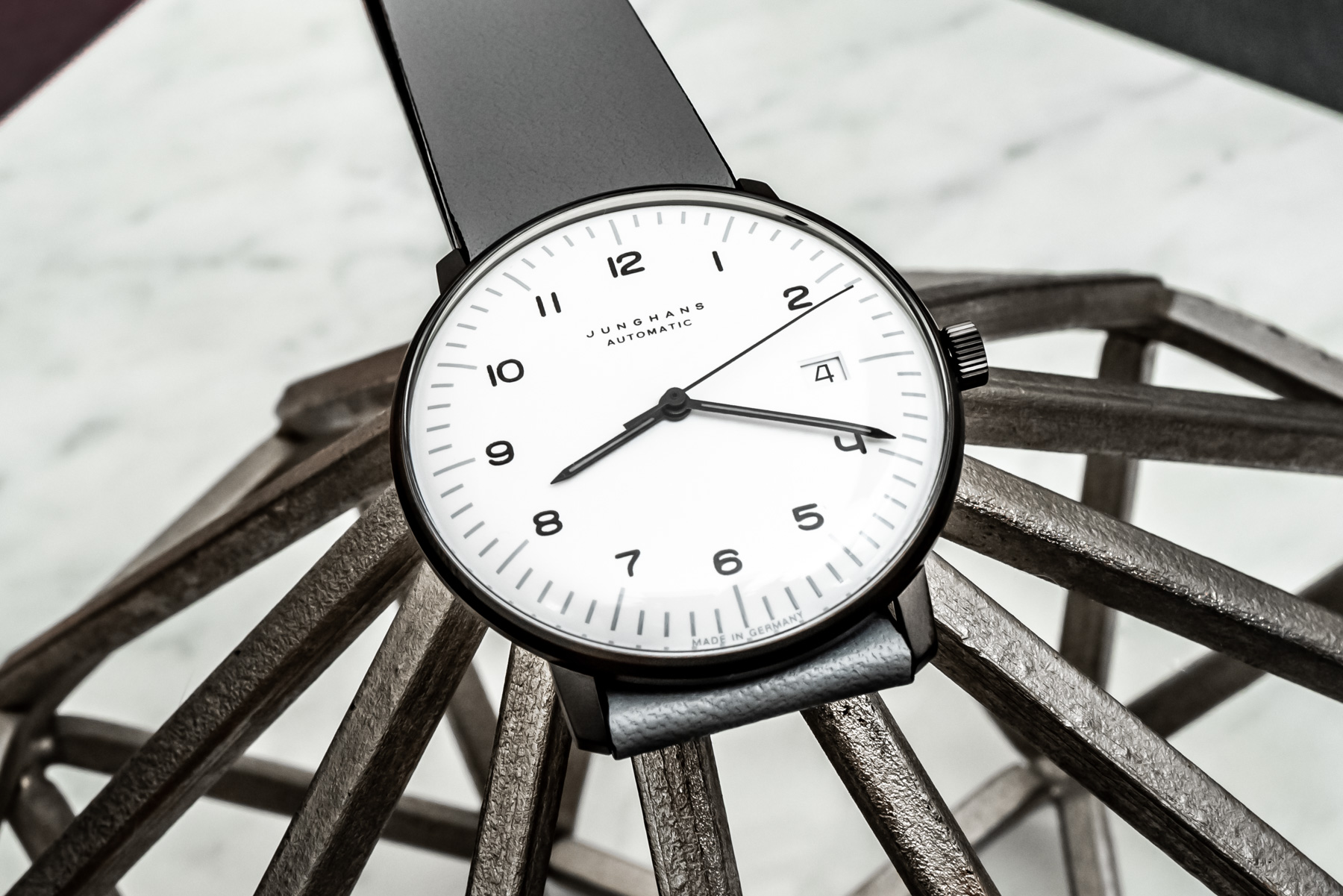 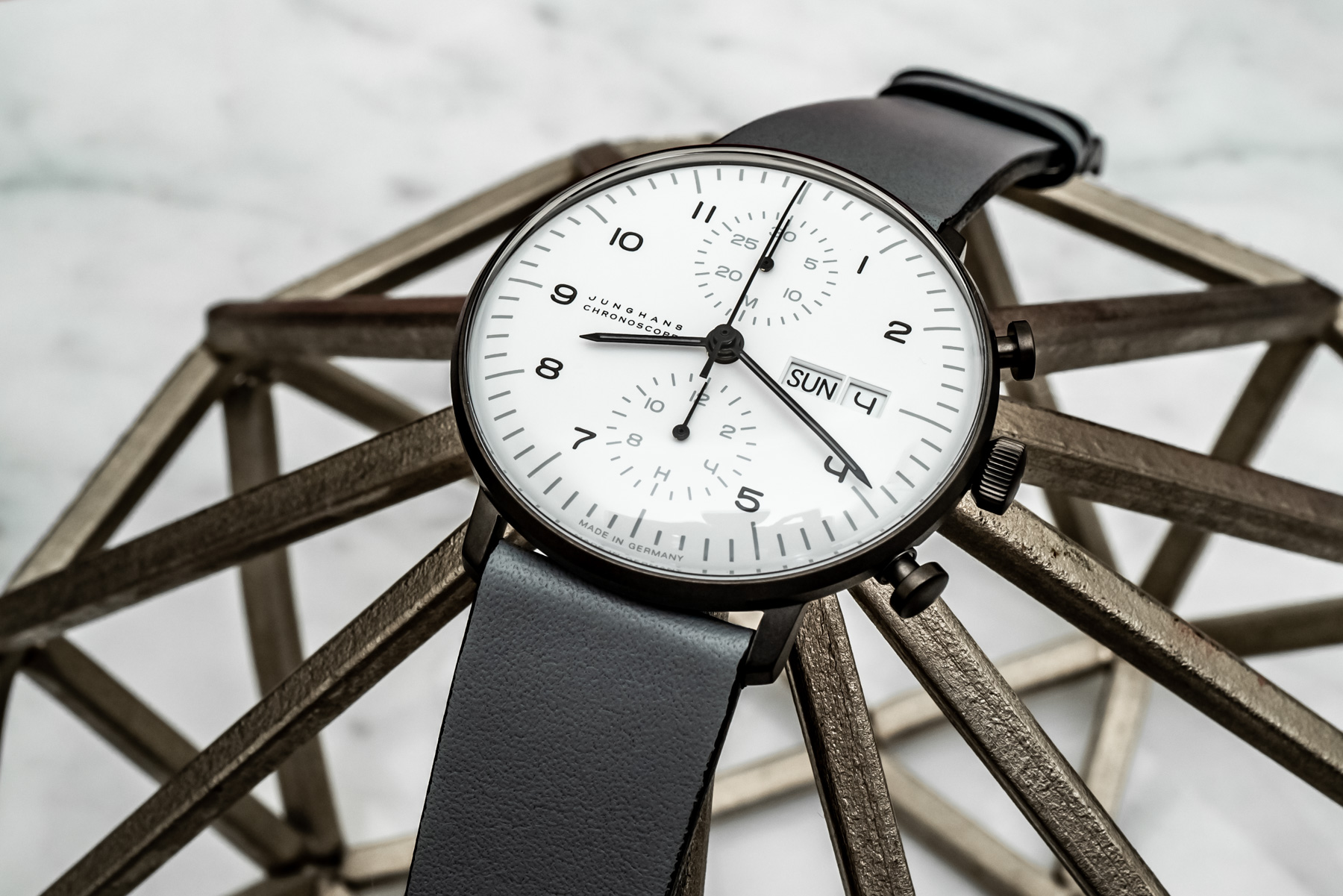 The black and white models are offered in both the Chronoscope and Automatic lines. Each model features a stainless-steel case with a matte, anthracite grey PVD coating that provides a sharp contrast to the matte white dial. The Chronoscope epitomizes Bill’s philosophy of design – legibility, proportion, and symmetry are front and center. The matte white dial, paired with black and grey printing, maximizes readability, and the use of grey Super LumiNova on the hands and cardinal positions (12, 3, 6, and 9 o’clock) maintains the monochrome color scheme while ensuring legibility continues well into the night. 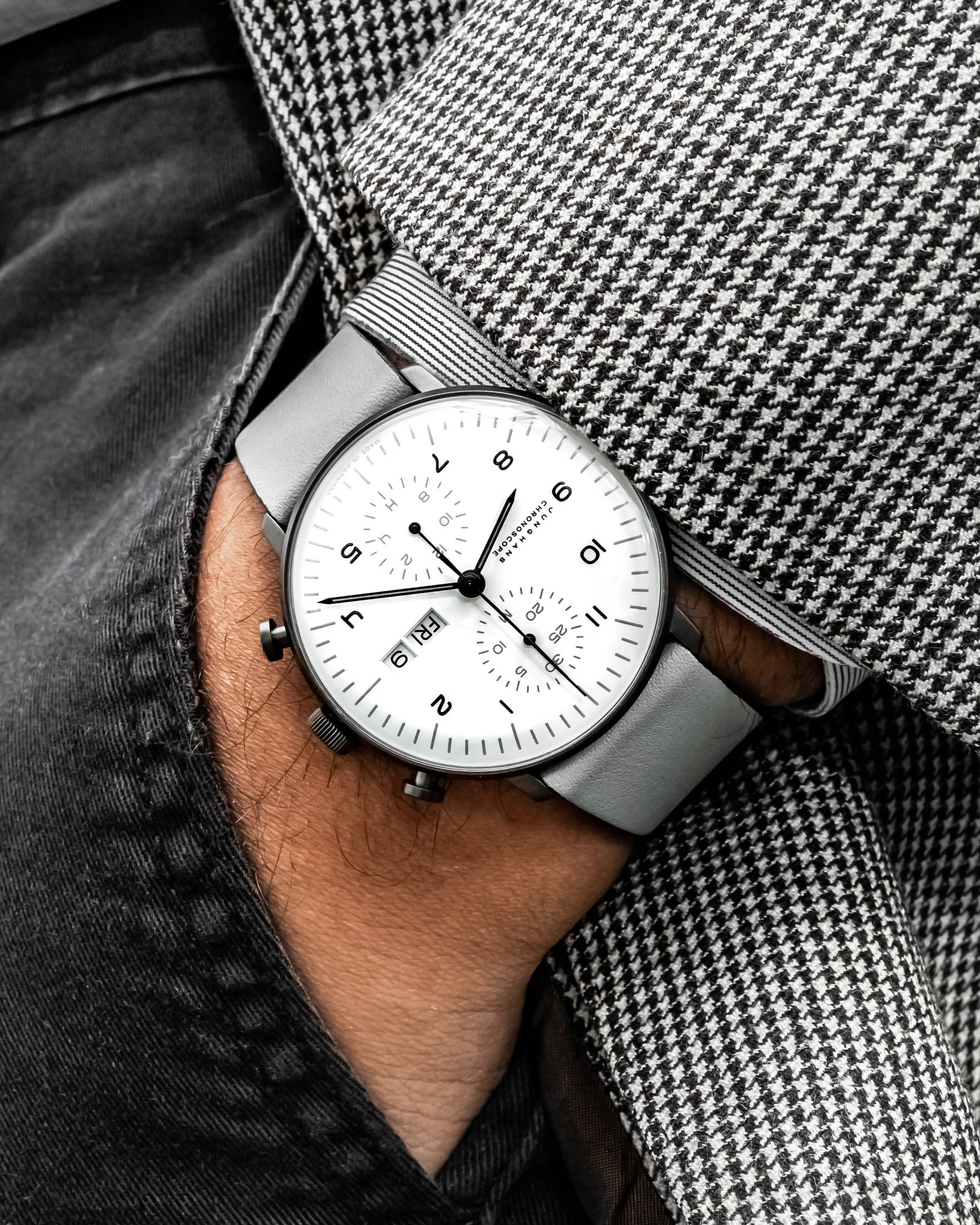 The Junghans Max Bill Chronoscope case is 40mm in diameter with a case height of 14.4mm and is paired with a domed Plexiglass crystal that retains the original warmth and charm from the early 1960s when the watch was first introduced. The Chronoscope is powered by the caliber J880.2 movement based on the Valjoux 7750. The time-tested movement includes both day and date functions, but more importantly powers the chronograph functionality, which features stop seconds, 30-minute, and 12-hour counters. To maintain visual symmetry, the watch foregoes a running seconds register and instead features only text at 9 o’clock to balance the day and date at 3 o’clock. 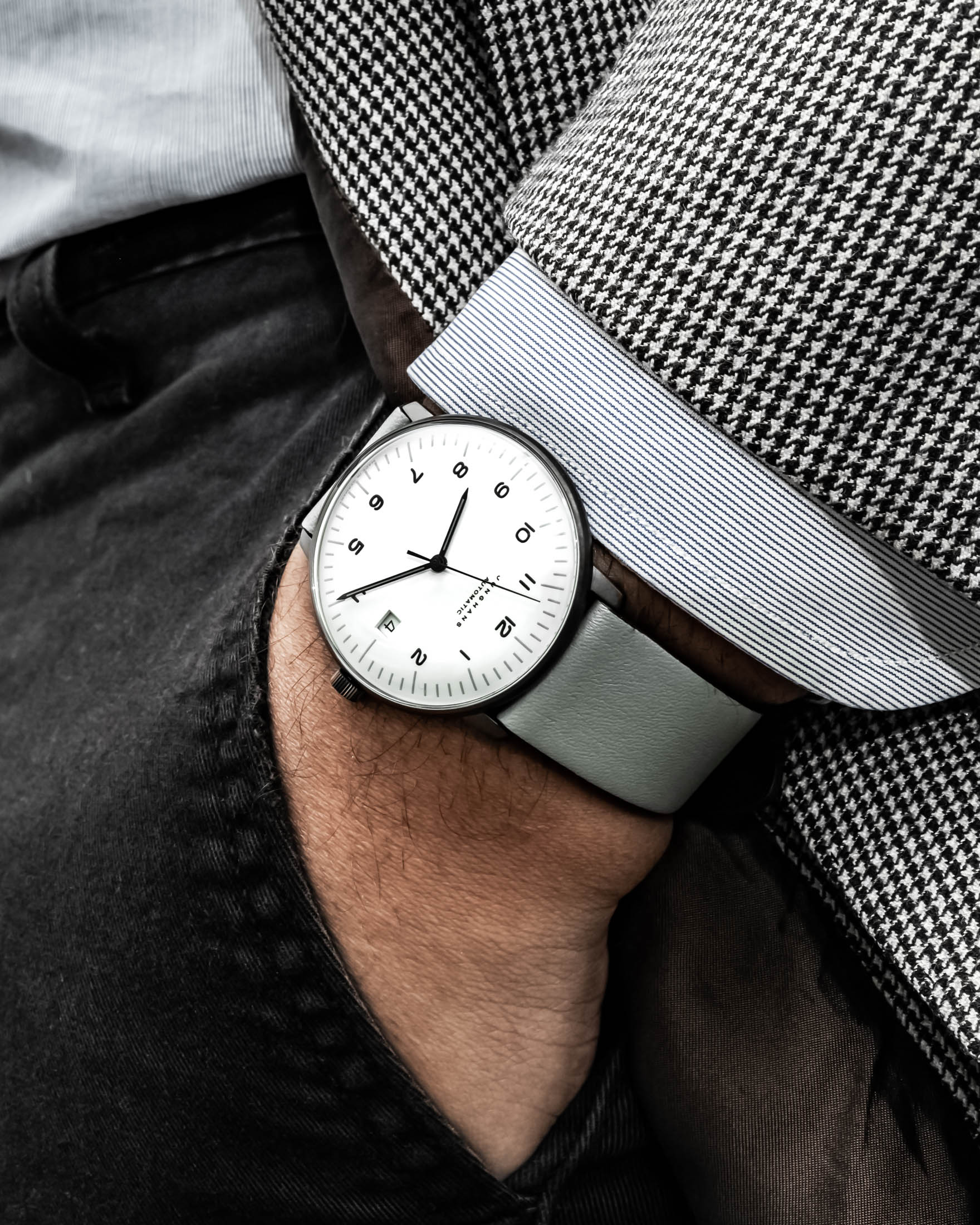 Paring down to just the essentials, the Junghans Max Bill Automatic is all about simplicity and minimalism. Featuring the same anthracite grey case and matte white dial, the Automatic showcases Max Bill’s signature style of simplicity and legibility. The dial features Arabic hour markers originally designed by Max Bill for his kitchen clock Exacta produced by Junghans in 1957. The same typeface is used for the dial text at 12 o’clock. Like the Chronoscope, the Automatic features a matte black handset with grey Super LumiNova for nighttime legibility. 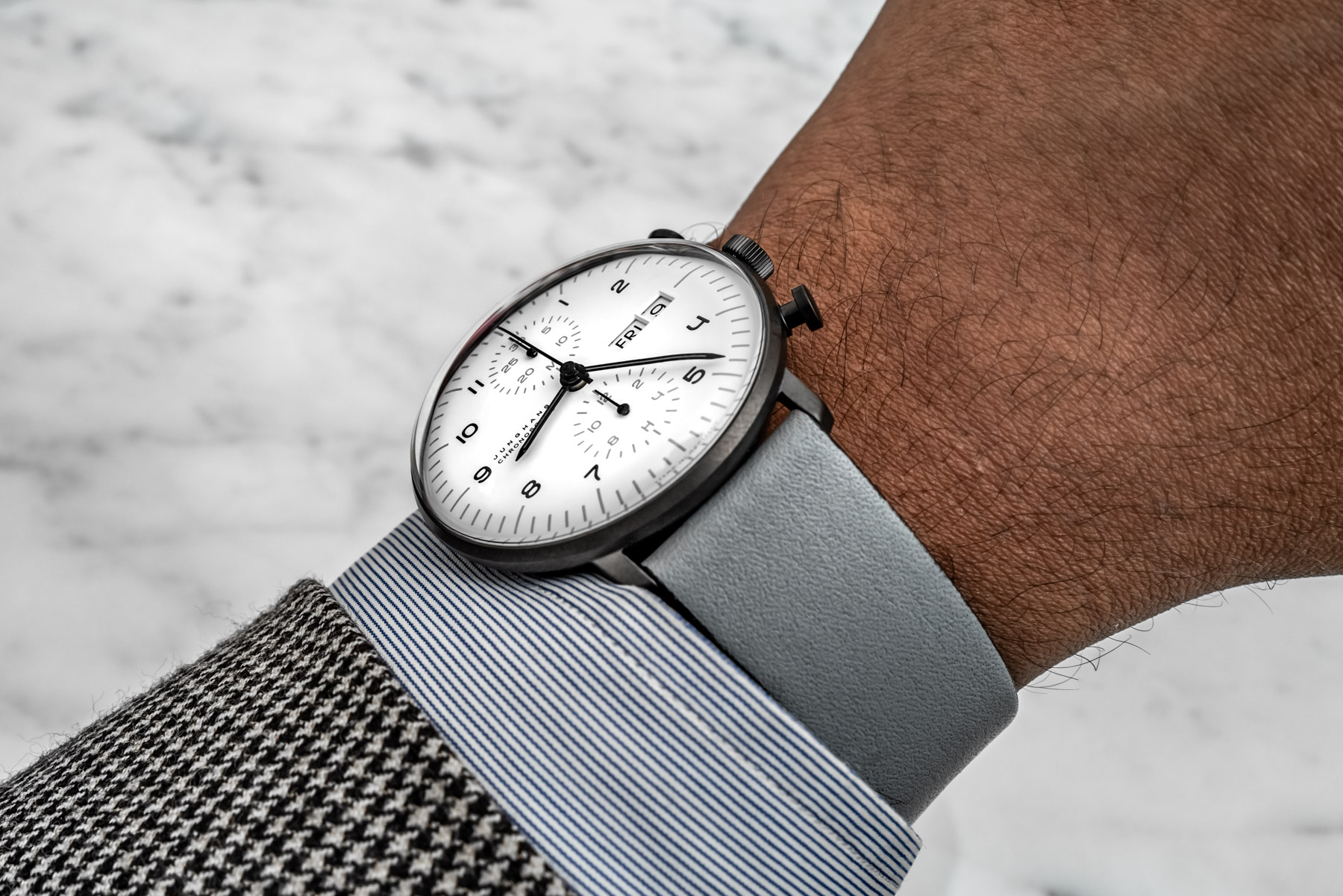 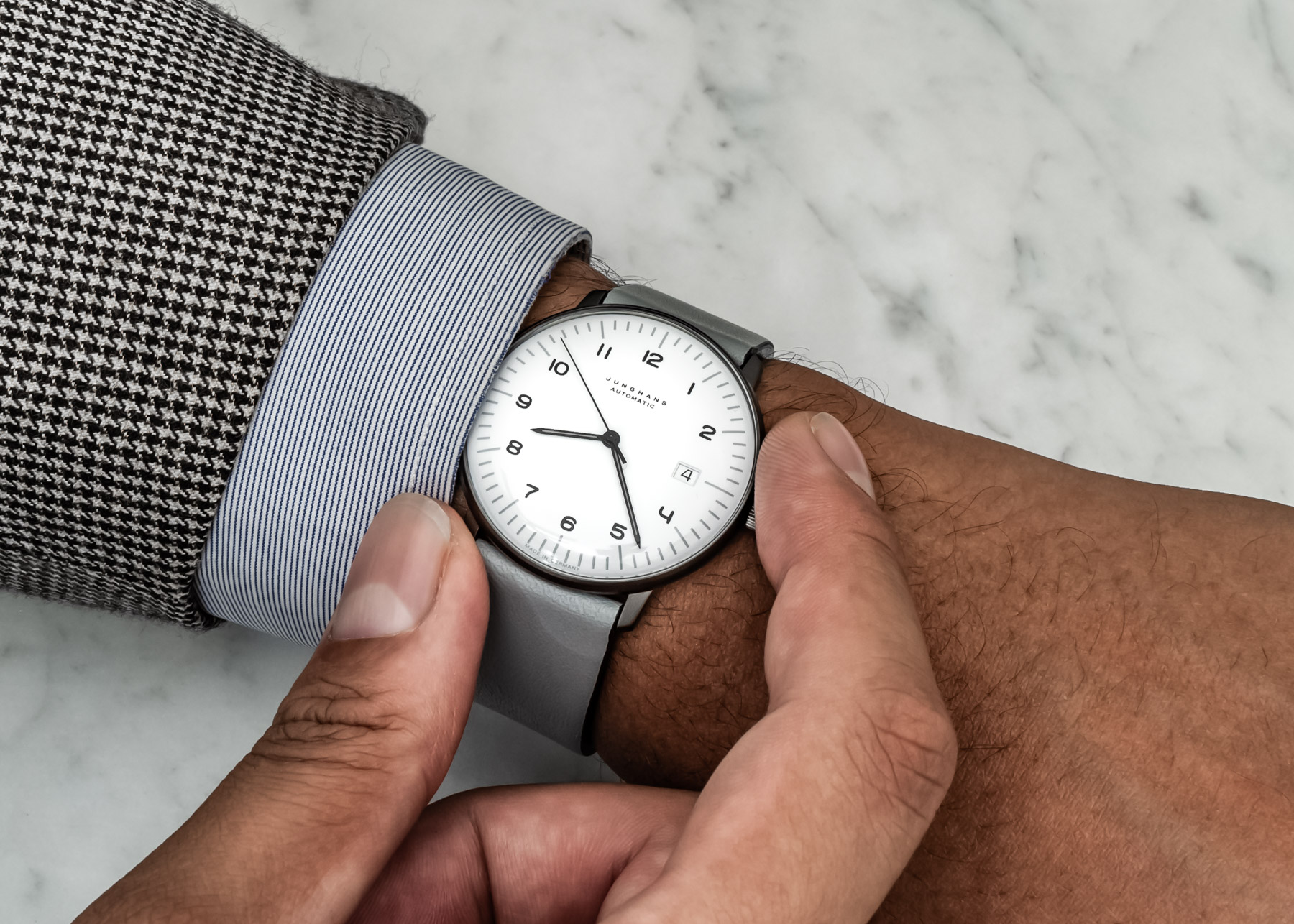 The Junghans Max Bill Automatic is available in both a 34mm and 38mm case diameter, with both measuring in at just 10mm in height and topped by a domed Plexiglas crystal. The restrained dimensions and two case diameters mean that they will work on a range of wrist sizes and be equally at home on men and women. The Max Bill automatic is powered by the caliber J800.1 movement based on the ETA 2824-2 automatic movement. The movement beats at 28.8kbph and features 42 hours of power reserve and date function. 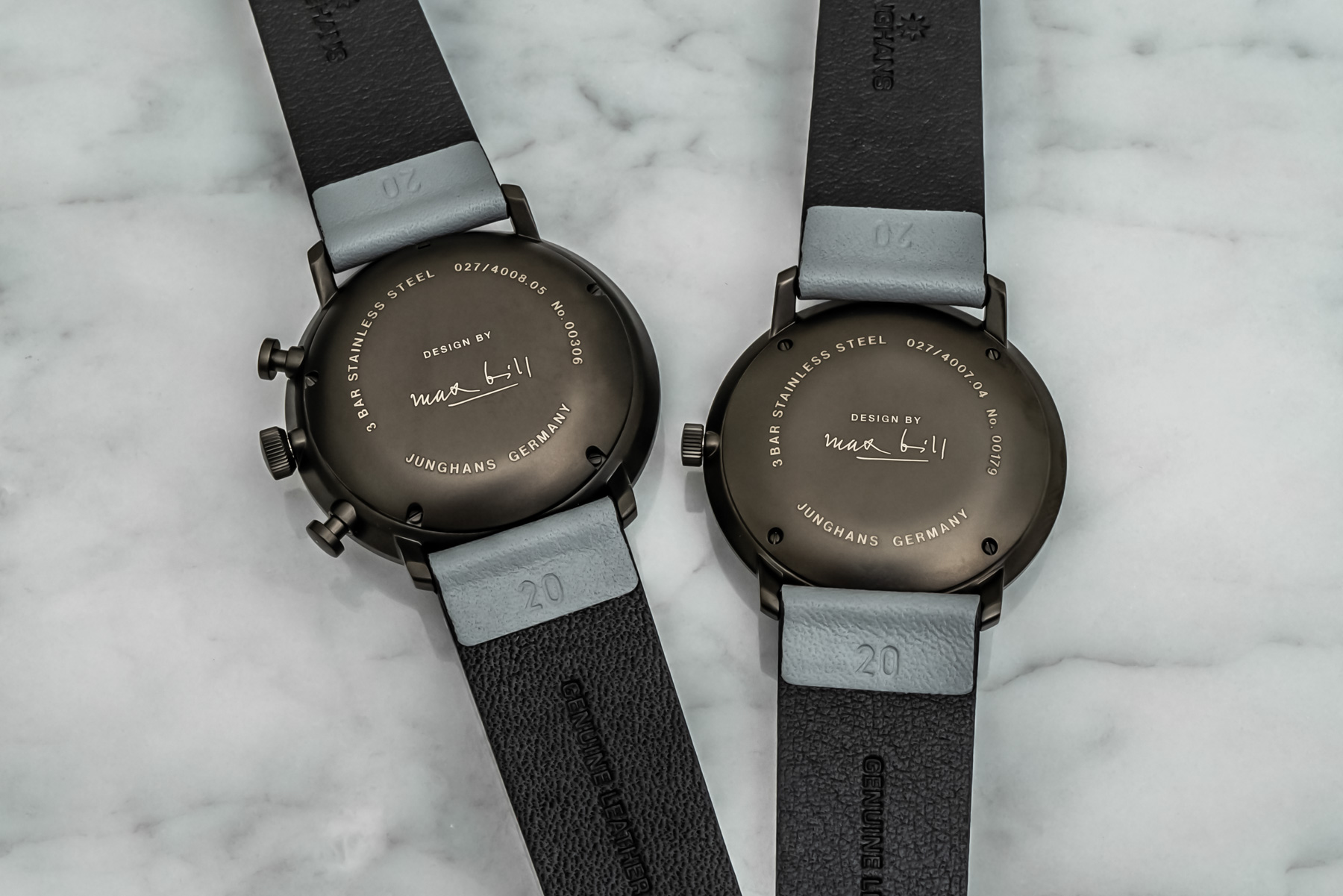 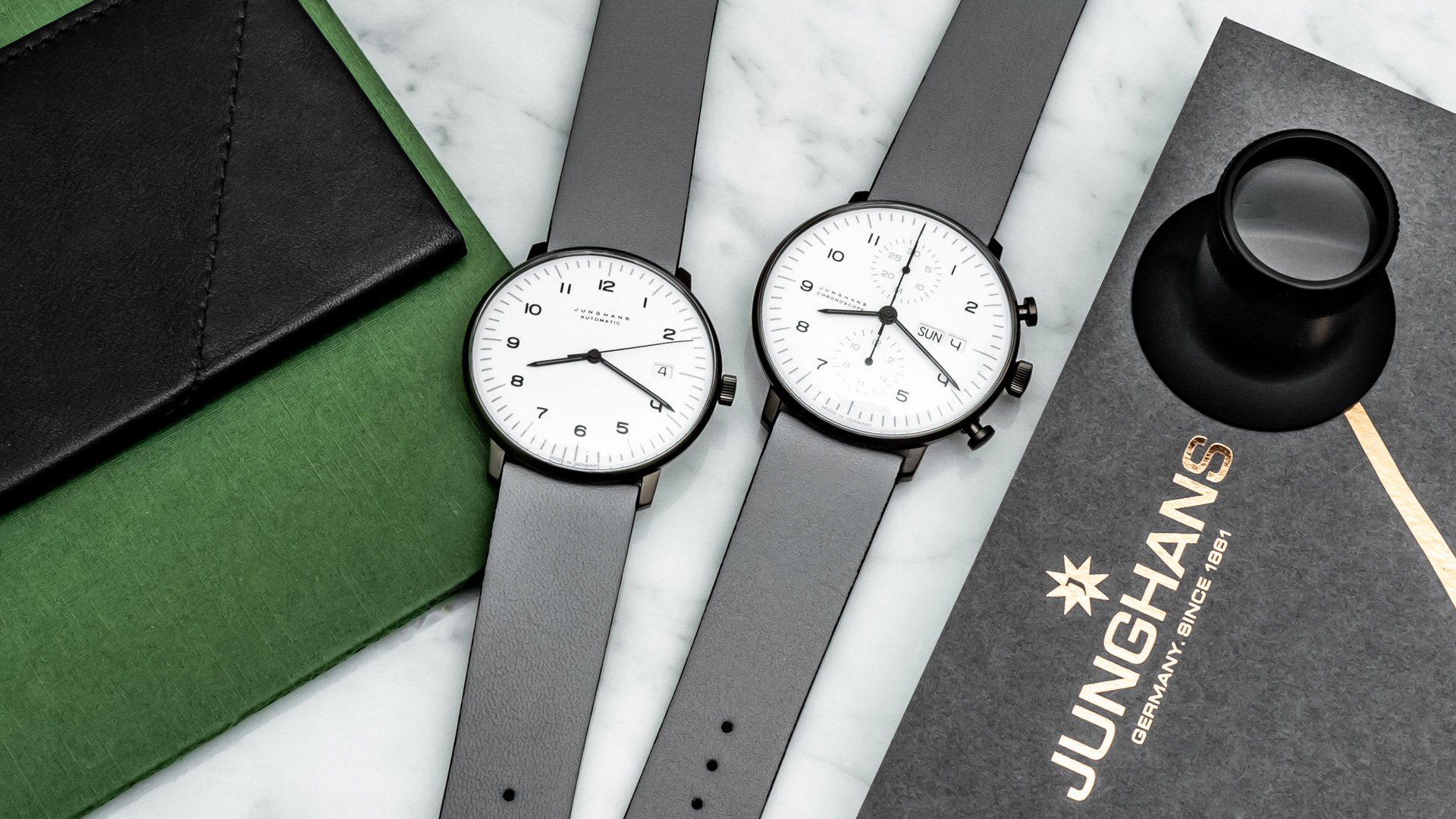 All watches in the black and white collection feature a fitted matte grey calf leather strap with PVD-coated buckle that matches the case. The Max Bill line of watches highlights the enduring quality of impeccable design. Nearly 60 years later, the Max Bill black and white watches retain the signature look of the original timepiece, yet the black PVD case and monochrome colorway only enhancing the design’s timeless charm. The Junghans Max Bill Chronoscope retails for $2095, while the Automatic 38mm and 34mm retail for $1195 and $1095 respectively. For more information on Junghans watches, please visit the brand’s website.