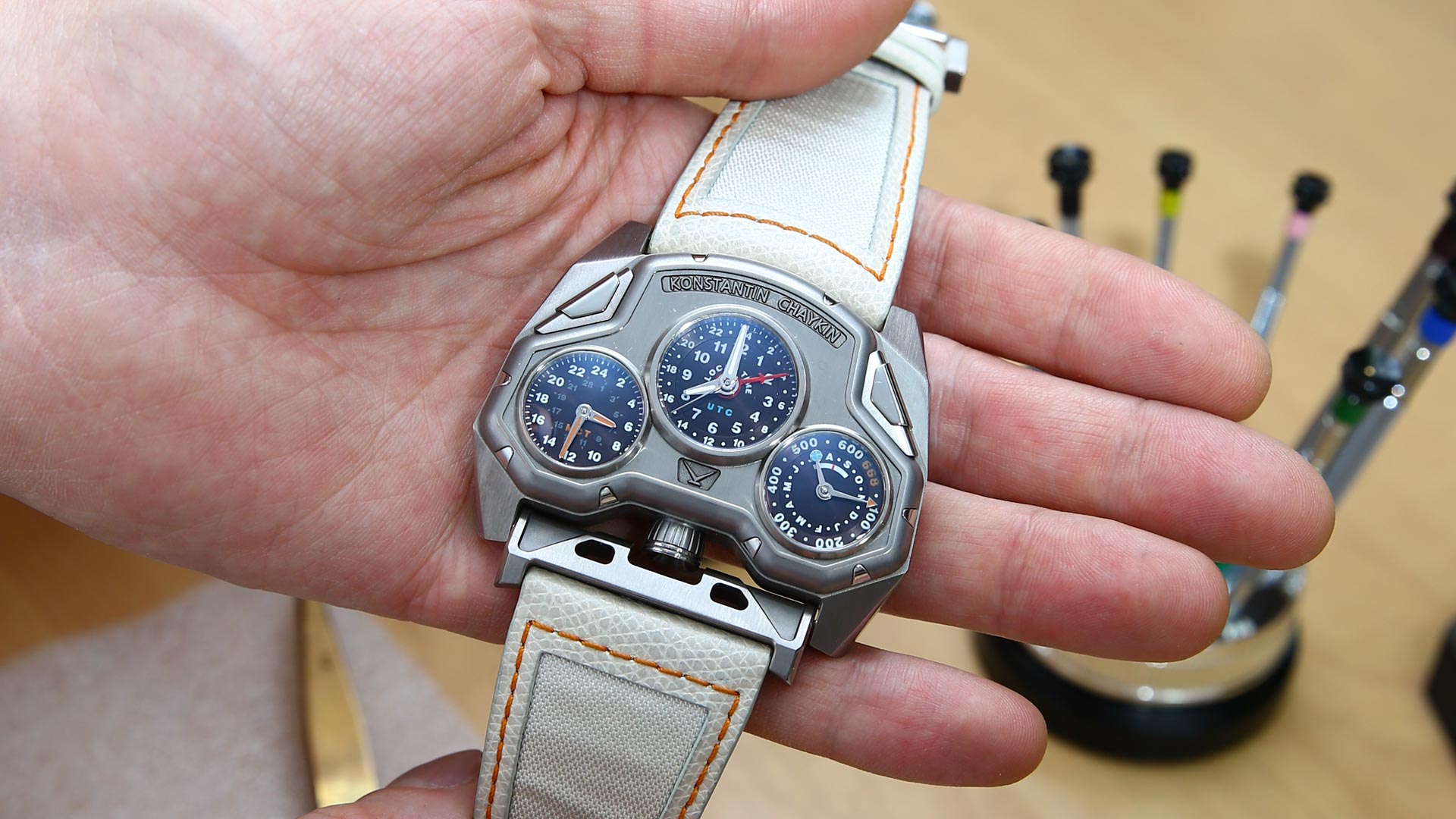 The module of the Mars Conqueror — entirely conceived, developed, produced and adjusted by the Konstantin Chaykin manufacture in Moscow — is composed of 159 parts, including 30 wheels, six pinions, and six jewels, so as to reduce friction and wear. The module is installed on an ETA 2836-2 that Konstantin refers to as “a reliable, tried and tested automatic caliber and a real workhorse of the modern watch industry.” There are three correctors on the caseback for indicator adjustments.

The average duration of the Martian solar day (called “sol”) is approximately 24 hours, 39 minutes and 35.244 seconds, or 88775.244 seconds. The mean of Earth’s solar day is 24 hours, or 86400 seconds. Based on calculations performed by Konstantin, it is possible to make the transition from the gear system of terrestrial time to the gear system of Mars time with the use of two wheels with 109 and 112 teeth. The 112/109 gear for Martian time indication is patented by Konstantin Chaykin. Thus, the duration of the Martian day with the use of this gear is 86400×112/109 = 88777.98 seconds, which is longer than the mean Martian solar day by just 2.7 seconds. That 2.7 second deviation should be considered precise, as it is less than the daily variation of a mechanical COSC chronometer, which is between -4 to +6 seconds a day. The 112/109 gear allows for the production of a technically correct synchronization of Mars and Earth time indications. During the development of the Mars Conqueror, Konstantin has also bumped into rather obscure issues, such as the world not yet having a Martian calendar system, “mainly due to the lack of practical necessity,” as Konstantin rather comically notes in press release. Still, he decided to use an annual date indication with 668 sols, confirming his belief that this indication will not lose its relevance — especially since this display is done in such a way that makes it easy to reconfigure to indicate the duration of a Martian mission in sols. Setting and adjusting the Mars Conqueror watch is an adventure unto itself, as these tasks are performed using the winding crown and the caseback’s correctors. The former is for the winding of the automatic caliber in its zero position; turning the crown in its first pulled position in the clockwise direction adjusts the GMT timezone; and in the anti-clockwise direction, the Mars time indication is adjusted. The second pulled position allows for the synchronized adjustment of the Mars and Earth hands. A watch of this caliber (and origin) will naturally have a case to match the boldness of its original concept and the complexity of its realization. The titanium case measures 60mm wide but just 48.5m lug-to-lug and is composed of 74 parts — without strap or clasp. It features an articulating crown protector at what would normally be the 6 o’clock position of the case; add to this the deep integration and free movement of the top part of the strap and you have with a very wearable, comfortable watch. Speaking of straps, the final touch of the space-inspired design is a white leather strap with orange stitching and the distinctive use of white fabric that Konstantin says is used for tailoring Russian space suits.

Having seen the quality of case and dial finishing that Konstantin and his manufacture can achieve, it is important to bear in mind that these shots show a prototype — and I’m certain that final hands, dials, and case details will be even nicer. Nevertheless, on the wrist, the Konstantin Chaykin Mars Conqueror should be all you need to feel like a Martian colonist — or that you’re about to embark on a trip to the orange planet tomorrow. Perfectly in line with Konstantin’s tireless search for novel sources of inspiration, the Mars Conqueror is another refreshingly creative, yet strangely relatable, piece of high-end watchmaking that I, personally, really enjoy and am thankful exists. It will have no trouble finding its way, if not to Mars, then onto the wrists of open-minded collectors who can appreciate engineering and quality wrapped in a novel package.