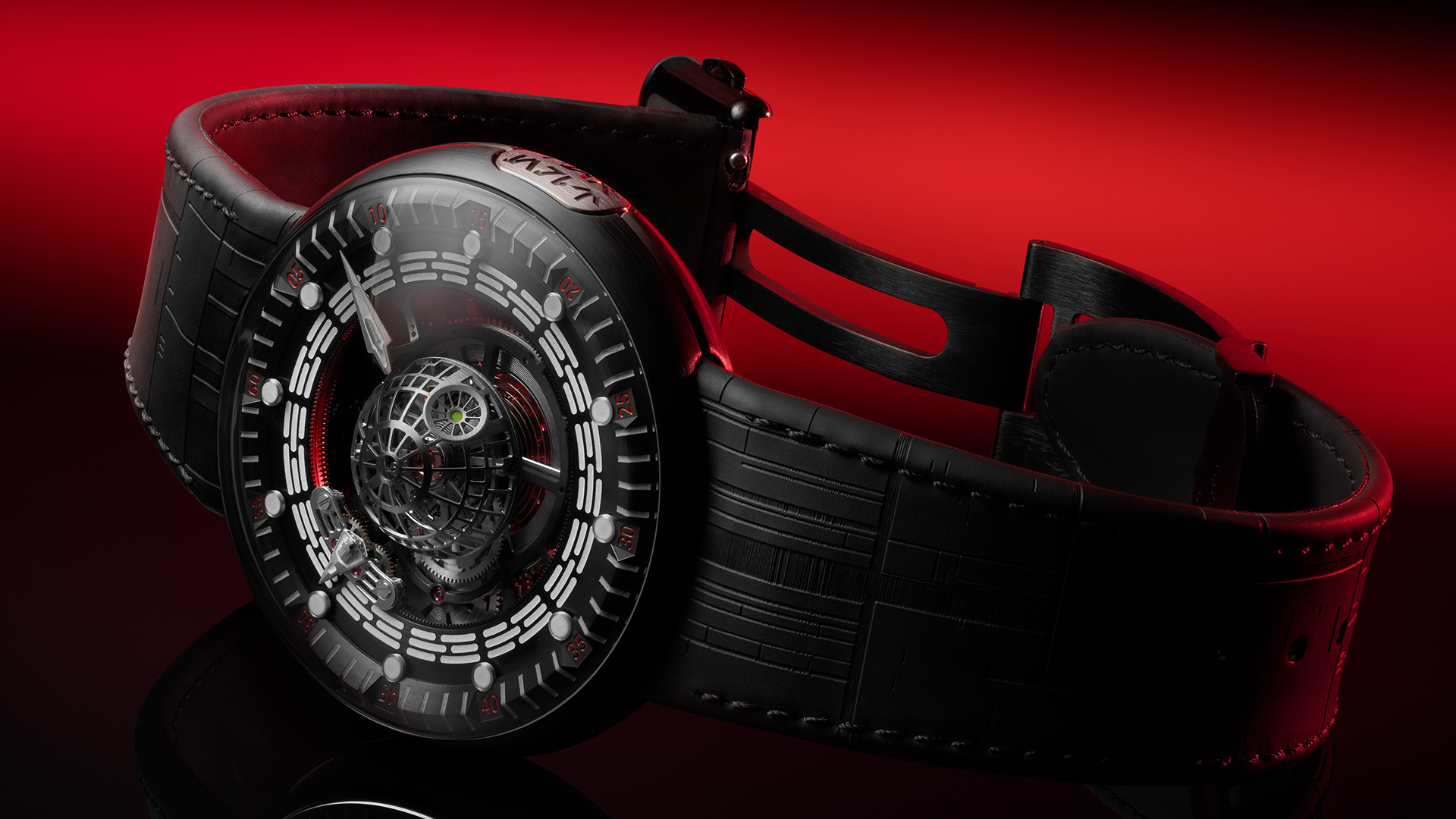 While haute horlogerie has long been a breeding ground for flights of horological fancy, the last decade has seen many of these exotic pieces turn from abstract to directly referential designs, creating a wave of extremely intricate ultra-luxe timepieces ripped right from the pages of sci-fi and fantasy. Newly-formed Kross Studio is the latest brand to join this rare and fanciful segment of the watch market. Rising from the ashes of recently defunct RJ, with its legacy of ultra-high end designs inspired by pop culture icons like Pac-Man and Spider-Man, Kross Studio continues the work of its predecessor with its latest limited edition release. Produced hand in hand with Lucasfilm and paired with a genuine screen-used kyber crystal prop from “Rogue One: A Star Wars Story,” the new limited edition Kross Studio Death Star Tourbillon is a dramatic, gloriously over-the-top design that may very well be the ultimate toy for the wealthy “Star Wars” fan who has everything. 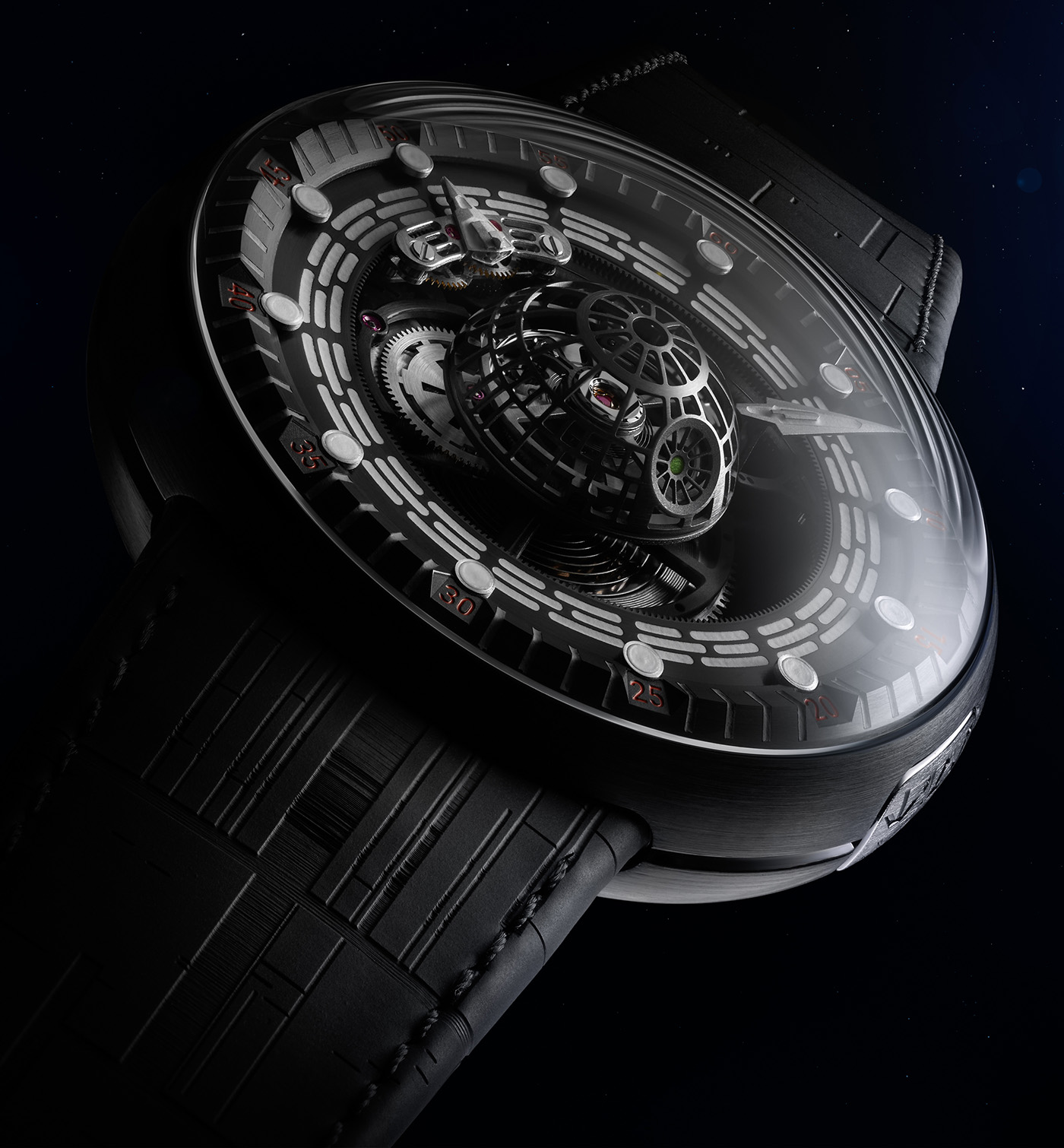 The 45mm DLC-coated Grade 5 titanium case of the Kross Studio Death Star Tourbillon starts off the “Star Wars” inspiration boldly with a spacey, lugless form. This minimal brushed shape may be smooth and rounded, but it packs in a wealth of integrated references to the beloved movie franchise. The crown has been replaced with a folding D-ring that sits flat against the sapphire caseback, with a central hub displaying the emblem of the villainous Galactic Empire in enamel. A recessed pusher at 3 o’clock swaps this unorthodox crown between winding and time-setting functions and features an engraving in the Aurebesh script used in the “Star Wars” galaxy. While this smooth futuristic design might be ready for space combat, it’s rather unprepared for water with a depth rating of only 30 meters.

For the intricate skeleton dial of the Death Star Tourbillon, Kross Studio pulls nearly every visual element directly from the films themselves. The lumed track inside the applied hour indices uses the same iconic pattern as the hallway lighting inside the Death Star itself in the original “Star Wars,” while the hour hand and minute hand take the shape of an Imperial-II class Star Destroyer and the massive Executor-class Super Star Destroyer, respectively (for the record, I didn’t have to look any of those things up. I’m that kind of nerd). The planetary gear system moving the hour hand adds to the sense of visual drama here while giving visual emphasis to a small floating element that might otherwise severely hamper legibility. For the larger minutes hand, the brand opts for a slimmer, nearly hidden attachment to the outer planetary ring gear for a cleaner look. Of course the real centerpiece of the dial, and indeed the watch itself is its massive central tourbillon. The intricate domed skeleton cage echoes the look of the famous Death Star superweapon from the original film, with a lime green dot to represent the Death Star’s planet-killing superlaser. The cage and the tourbillon itself rotate fully once per minute to act as a running seconds indicator. Beneath the intricate skeleton framework of this oversized tourbillon cage, the visible area of the movement is scant but riddled with eye-catching detail. Several wheels in the gear train are engraved with the emblem of the Galactic Empire, and the visual background is dominated by the massive oversized mainspring barrel. 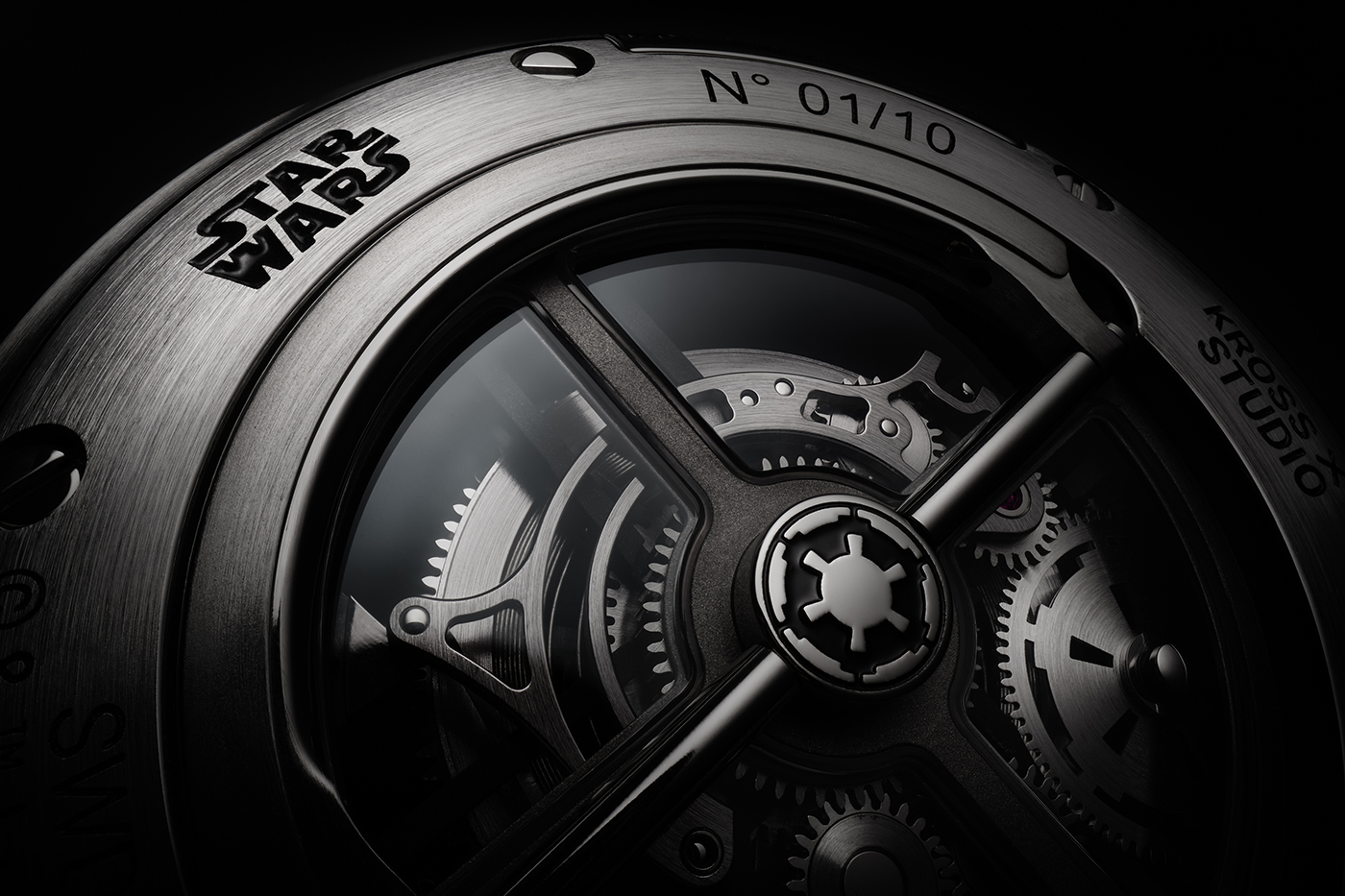 Inside the Kross Studio Death Star Tourbillon beats the in-house MKS7000 hand-wound central tourbillon movement. With its oversized tourbillon as a centerpiece and planetary gearing for the handset, this is an intricate and exotic design concept, but its decoration seems simpler than most of its contemporaries. There’s nothing in the way of striping or polished chamfers in initial images, and finishing across the skeleton bridges looks to be limited to smooth vertical brushing. While this is a departure from the rococo showcase of elaborate finishing techniques common to many designs in the haute horlogerie space, much like the rest of the watch the MKS7000 is proudly and decidedly not aiming to please every possible taste. That said, the stark and businesslike finishing on display here fits the austere, militaristic aesthetic of the Galactic Empire this watch looks to emulate. Performance for the MKS7000 stands at 120 hours of power reserve at a 21,600 bph beat rate. 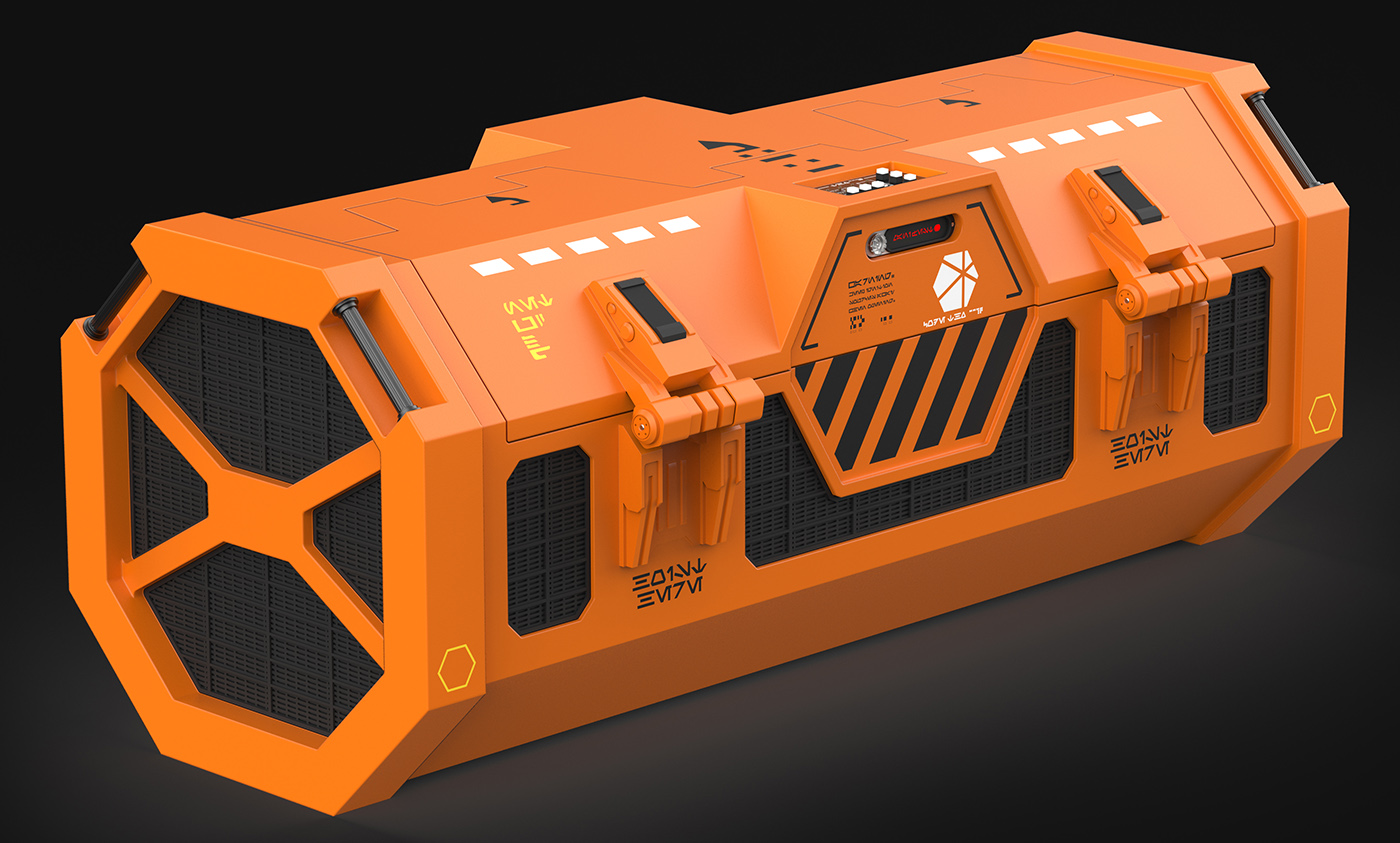 Kross Studio finishes the Death Star Tourbillon with three included straps. Two of these straps are embossed with an intricate asymmetrical texture emulating the surface of the Death Star itself, in both black rubber and gray leather. For an even more arresting look, the Death Star Tourbillon also includes a red rubber strap with black rubber inlay. With a watch so dedicated to the look and feel of the “Star Wars” universe, the packaging of the Death Star Tourbillon takes things a step further with an intricate and faithful recreation of a piece of “Star Wars” history. The orange and black angular container is a perfect half-scale replica of a container used in “Rogue One: A Star Wars Story” to transport vital kyber crystals, and inside one of nine inner canisters is a capsule containing an authentic screen-used kyber crystal prop from that same film. One other canister carries the watch, one is reserved for the extra straps, and six are open for additional storage. 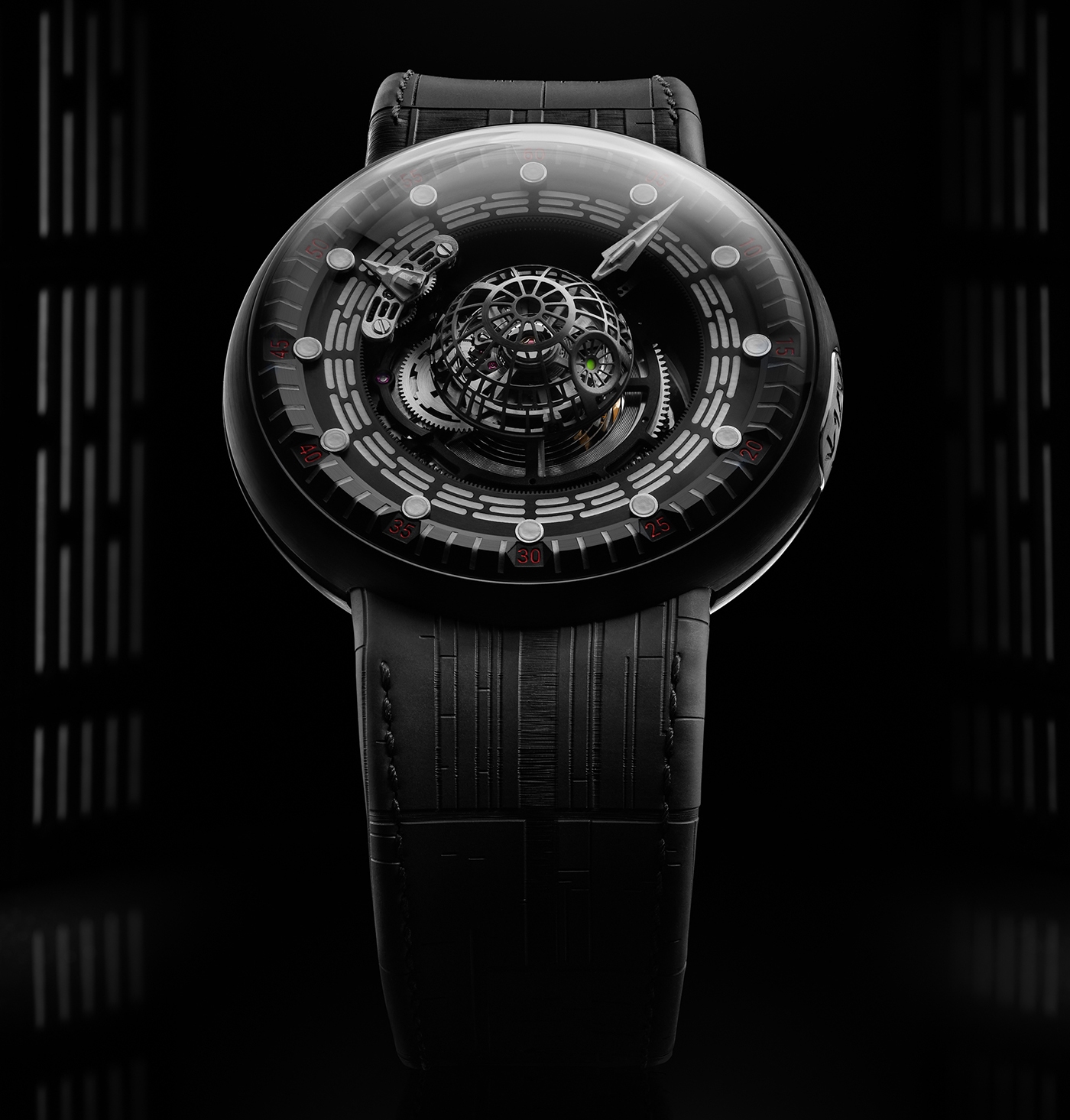 With a playful, willfully geeky ethos that caters to the wealthy “Star Wars” superfan and a dramatic movement layout, the limited-edition Kross Studio Death Star Tourbillon dances charismatically to the beat of its own drum. Only 10 examples of the Kross Studio Death Star Tourbillon will be made, available now at an MSRP of $100,000. For more details, please visit the brand’s website.