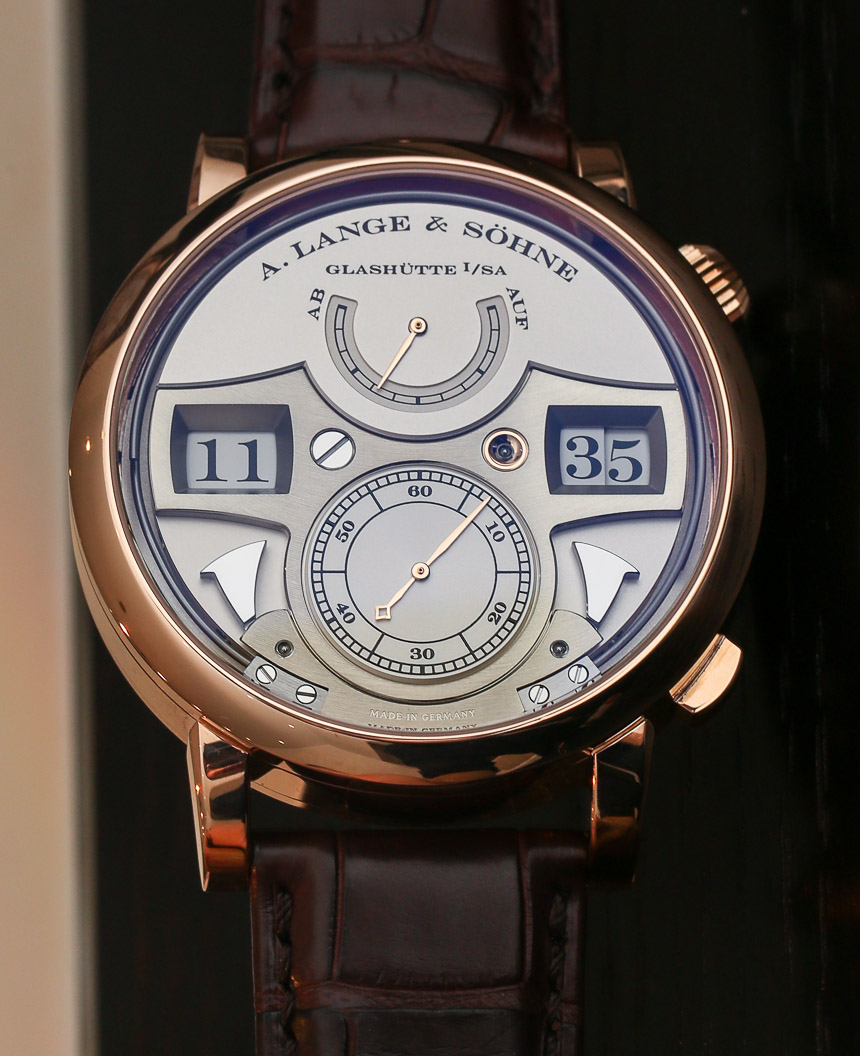 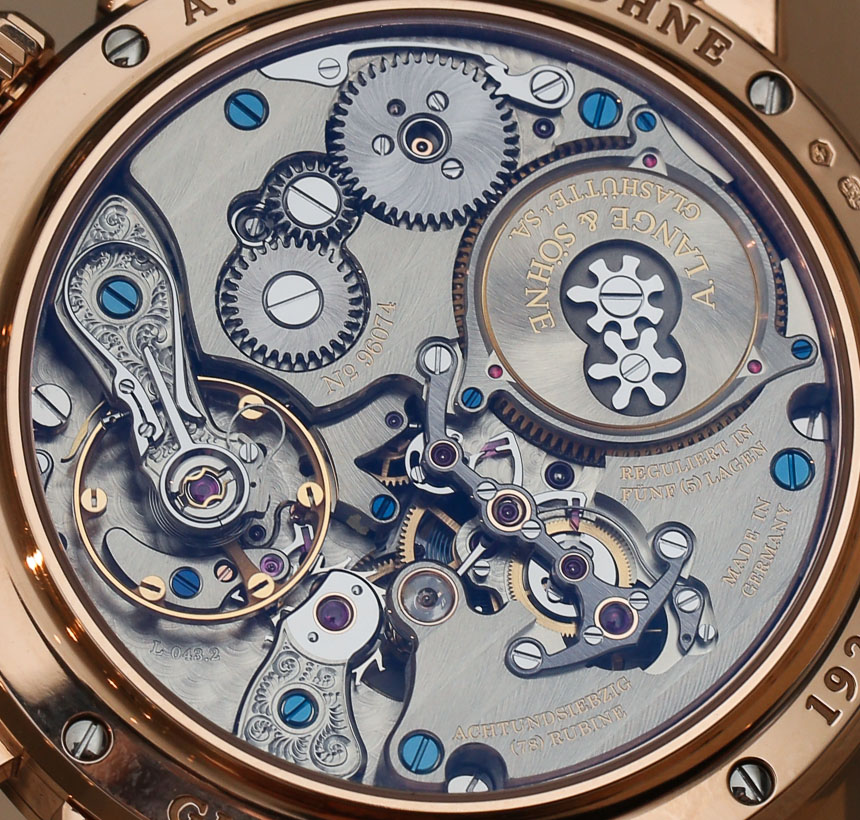 All of this is part of the beautifully designed, in-house produced and decorated caliber L043.2 manually would movement (containing 528 parts!). Seeing it through the rear of the watch reveals something lovely, but also something unique. There aren’t any other Lange movements that look quite like this. This has to do with the timepiece’s unique complications as well as features that are involved in what is actually a very complex mechanism. This movement is also very power hungry. The three jumping discs requite a lot of power and in some instances (such as, well, the hour changes) all three need to be moved at the same time. Also, jumping indicators tend to really wreak havoc on mechanical watch amplitude rates. Thus, A. Lange & Sohne needed to integrate a specially designed constant force mechanism into the movement.

These two features draw a huge amount of power from mainspring, meaning that the Zeitwerk has a comparatively short power reserve max time of 36 hours. That is, even considering it is only operated at 18,000 bph. Nevertheless, the constant force system should ensure a respectable level of accuracy. So that is another reason why a power reserve indicator is useful. There is also the matter of the striking complication.

Until now I have been mostly discussing the issues that exist with the standard Zeitwerk model. The Zeitwerk Striking adds a quarter sonnerie to the mix meaning that, when activated, the watch will automatically chime the time each 15 minutes. This can lower the power reserve even more when the striking function is activated. What is so nice is that the sonnerie’s hammers and gongs are located on the dial of the watch- and not the rear like other timepieces. What a sonnerie is doing with a digital watch dial is a question I can’t answer, but somehow it ends up being really cool. 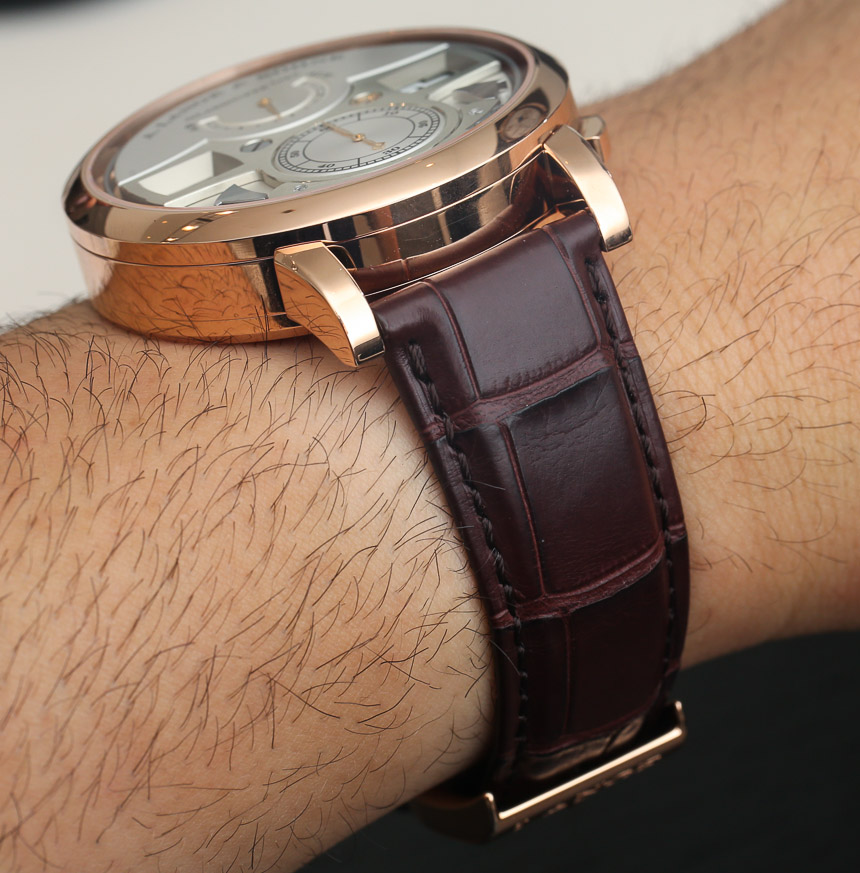 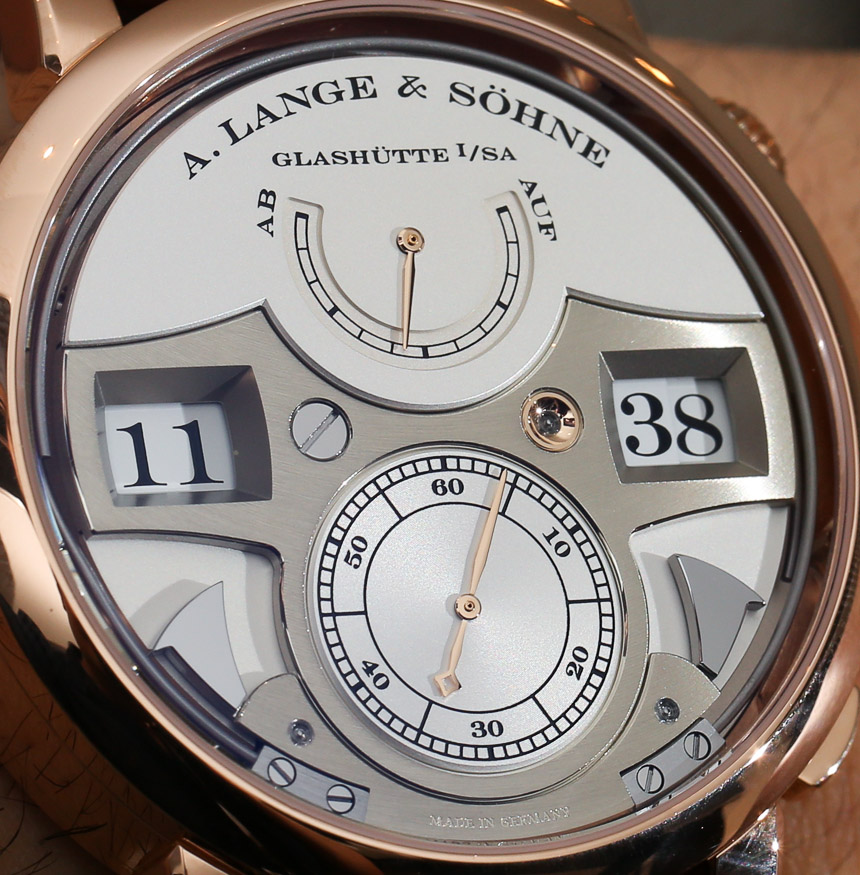 While the A. Lange & Sohne Zeitwerk Striking is not a new model for 2014, this 18k pink gold version with the solid silver and untreated German silver (for the “time bridge”) dial (ref. 145.032) is new for this year. The case material as well as the dial treatment is unique. I don’t believe that A. Lange & Sohne produces many of these, which is why so few of them exist. I am nevertheless happy that they do produce them.

Again, for most people interested in the classic good looks and conservative nature of an A. Lange & Sohne (mixed with the movement of course) looking at the avant garde Zeitwerk isn’t on their list. I totally respect that but must add that if you are looking for all the benefits of a Lange with a unique, yet lovable, design the Zeitwerk is a solid piece to look at–especially because it is so legible and technically interesting. Think about it: you have an easy to read dial, that eschews the notion of the brand overall, combined with a musical complication that is fun to play with and show off. Price for the A. Lange & Sohne Zeitwerk Striking in 18k pink gold is $117,500. alange-soehne.com