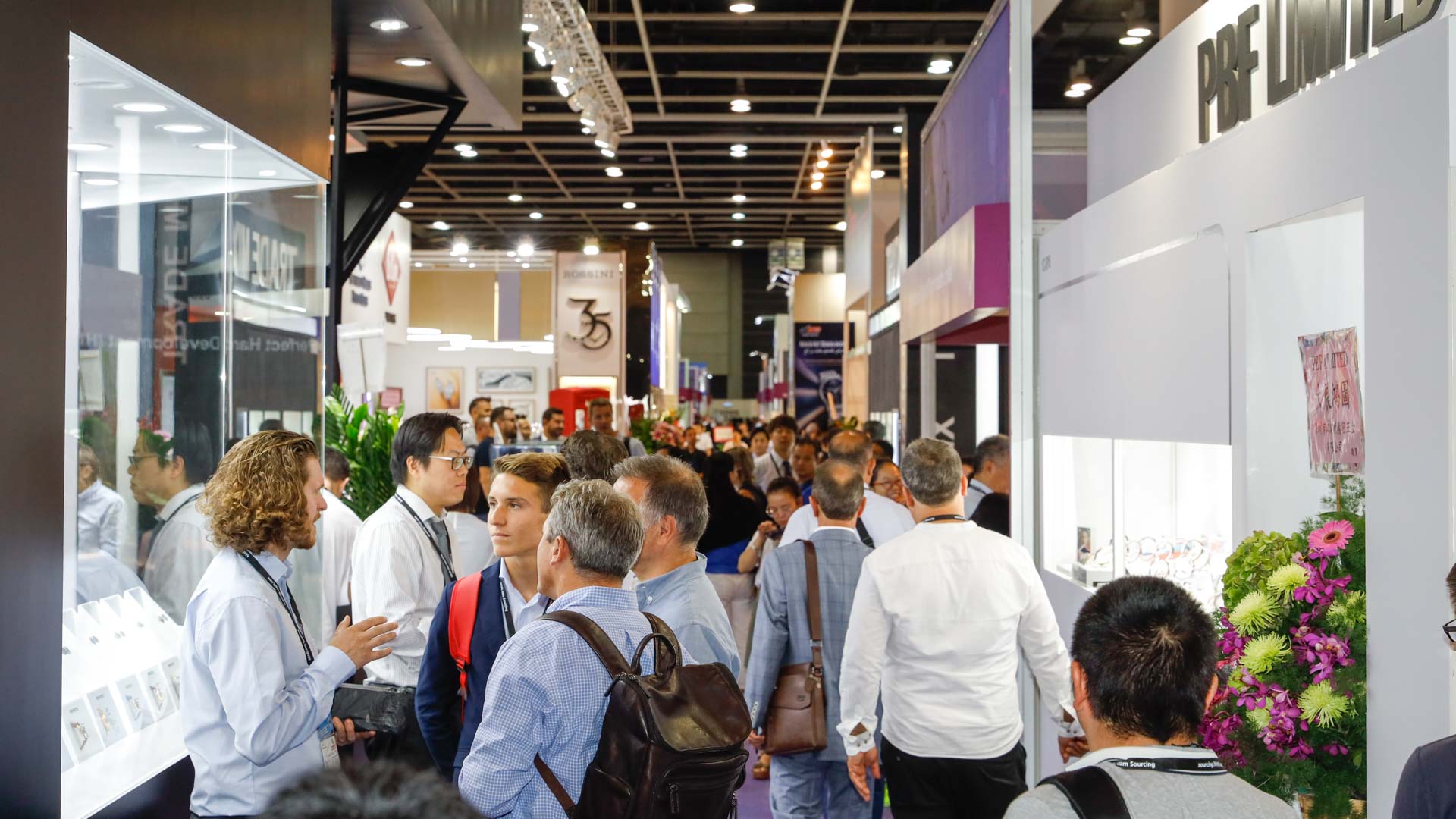 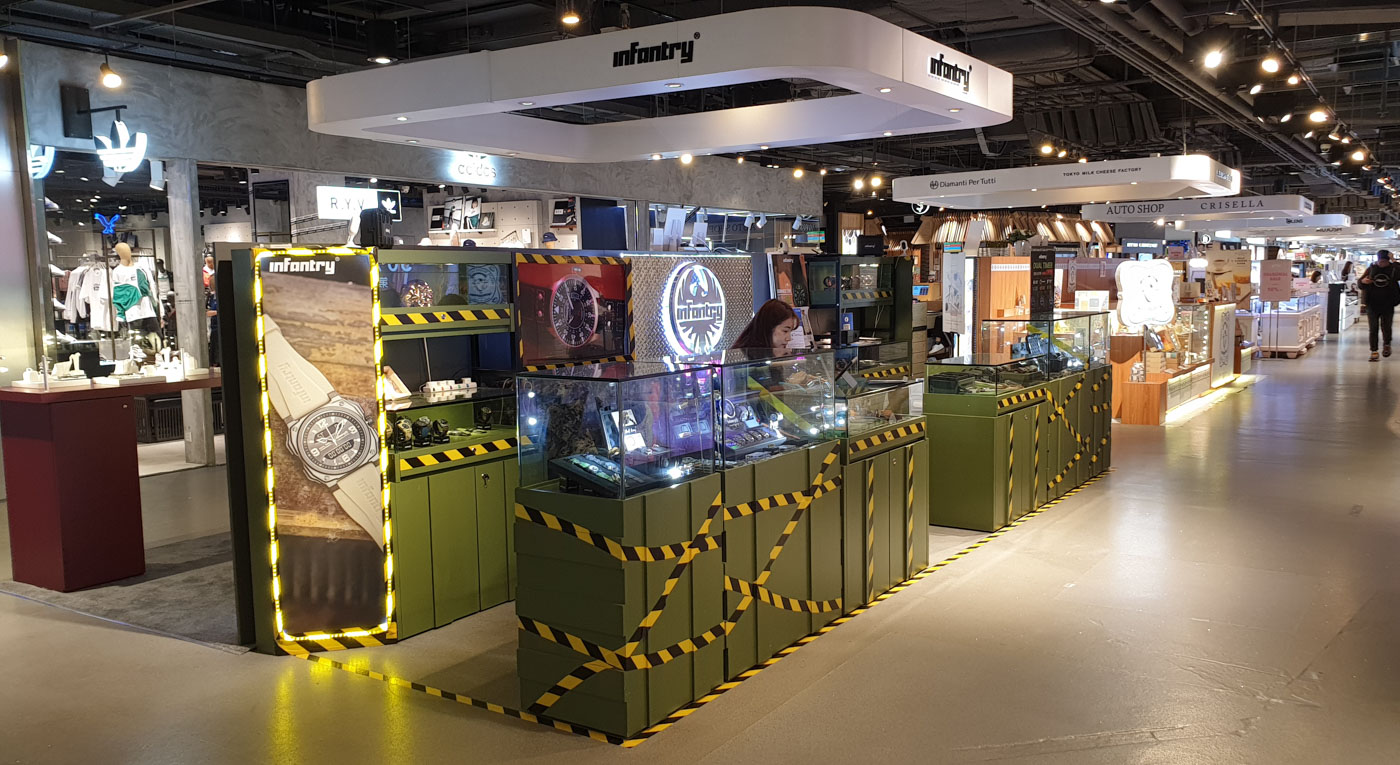 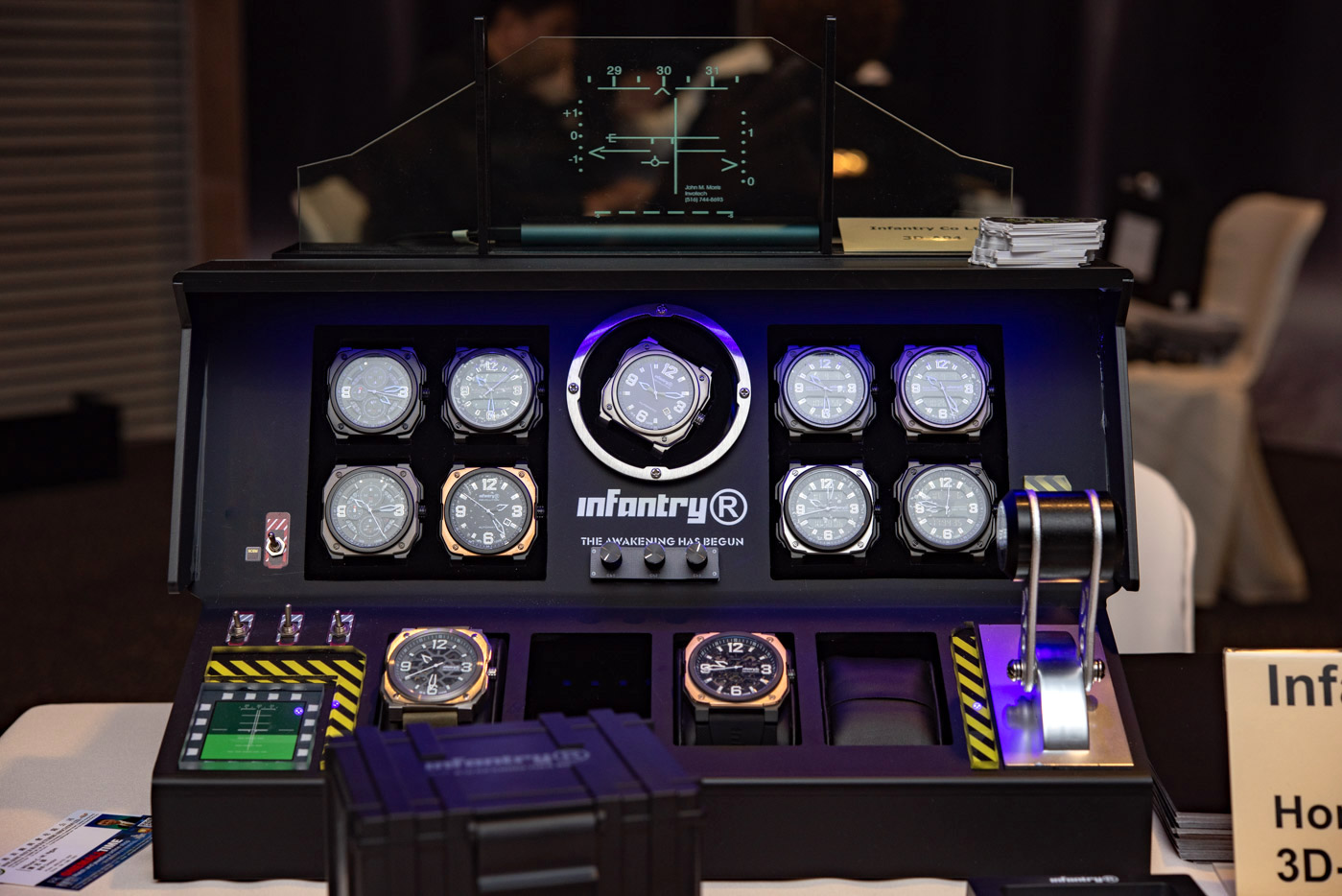 A more impressive push from the more savvy brands represented at the Hong Kong Watch & Clock Fair 2019 is their focus on their retail presence. Infantry, a relatively new and, according to them, lone-standing brand, has defined the types of watches it wants to produce — even if these fighter pilot tool watch-inspired pieces don’t exactly overlap with the brand name “Infantry” — and tailored its retail presence with some properly impressive attention to detail. They are among the few (but growing number) of brands at the Fair who understand the importance of presentation in a retail environment. Their kiosk is in such a shopping mall on the Kowloon side that has separate Gucci, Louis Vuitton and other high-end fashion brand stores for kids — along with the regular boutiques, of course. That a new brand would fit into that environment, and dress its kiosk up with such attention to detail, indicates where things are headed in this industry. The best have matured way beyond the techniques of stealing typefaces and mimicking watch brands — even if their designs, for reasons easily understood, are derivative to some extent. 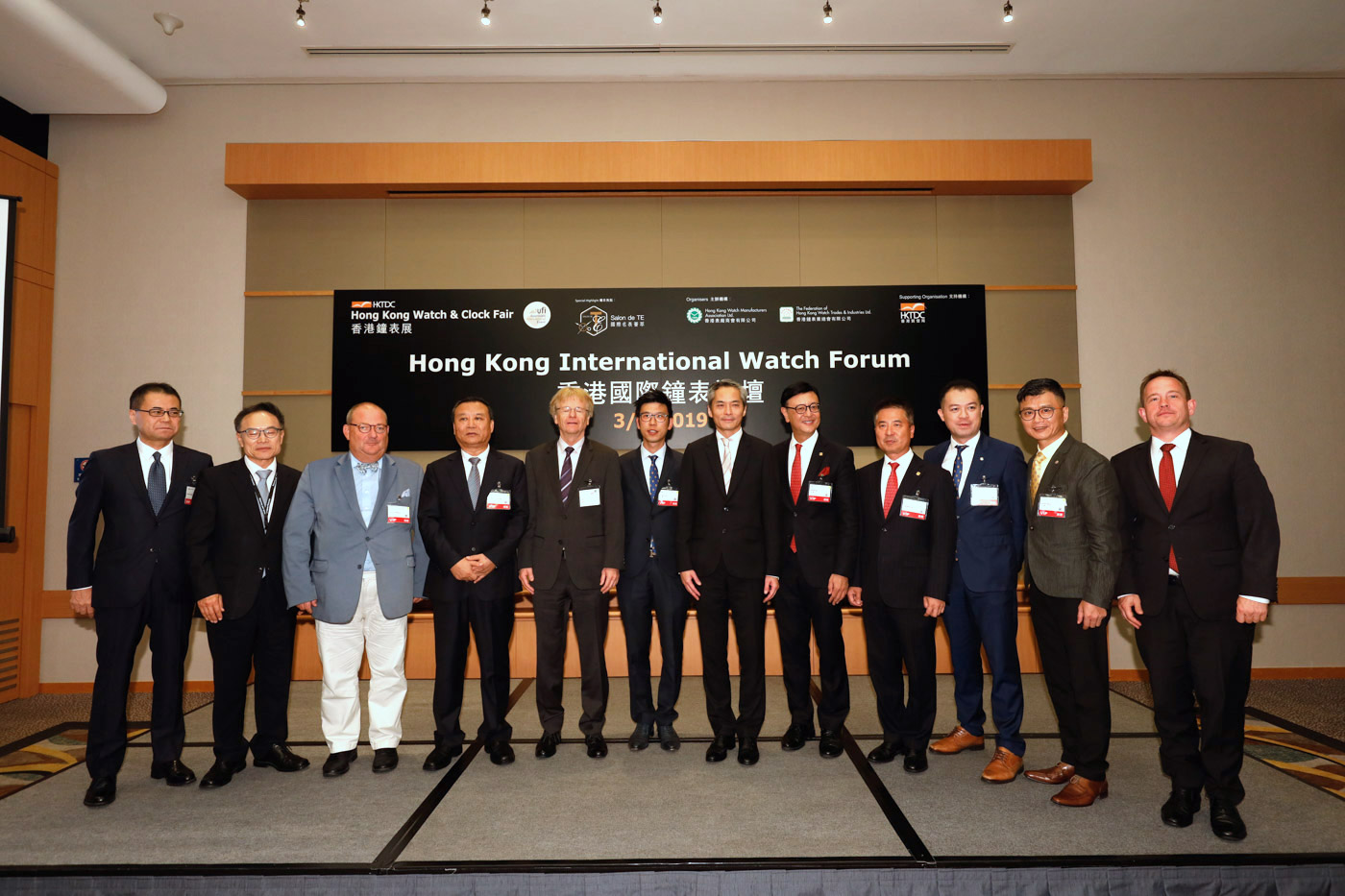 A fantastic event at the Hong Kong Watch & Clock Fair is the Hong Kong International Watch Forum, where representatives of the federations of major watch manufacturing and watch-buying countries are present. Switzerland, Mainland China, Hong Kong, Germany, France, and South Korea are all here to present the performance of their respective industries and markets. Despite all these years listening to their presentations and hearing the chairs voice their concerns on different issues, they are yet to convince me (and I guess the rest of the audience) what valuable actions and contributions these federations specifically make on behalf of their respective watch industries and watch markets. I mean, I am sure that they take actions and make steps, we just don’t really know what those measures are and how effective they have been. Such a forum would be a good place to boast a bit about their efforts and achievements — but that is yet to happen. Don’t get me wrong — it isn’t as though these national watch industry federations could single-handedly solve the “threat of the smartwatch” (something almost all of them very much like to talk about, despite the topic’s futility) or the dipping purchasing power of their markets — but what is actually being done, beyond bookkeeping national watch industry performance, remains to be disclosed. Similarly, it is a bit of a shame that the forum is more of a presentation of recent market-specific performance and hardly at all a discussion among the parties, although one certainly hilarious moment ensued when the German representative noted how, despite recent news, he was “feeling a lot safer in Hong Kong than in Paris” — as clearly heard by the French representative.

Time was short, but I did ask two questions. First, to Dr. Jean Daniel Pasche, president of the Federation of the Swiss Watch Industry FH. The FH keeps track of, among other things, the export figures and, therefore, the overall performance of the Swiss watch industry. Following Dr. Pasche’s presentation, I asked if FH compensates its figures with the (sometimes massive) watch inventory buy-backs performed by brands and luxury groups. You see, a small but steady increase, or even a stagnation (often presented as a positive matter at times of dire economic situations), could just be a result of manufactures pumping out the number of watches said manufactures were designed — through economy of scale — to pump out.

Richemont’s Jewellery Maisons, Specialist Watchmakers, & Other Businesses as highlighted in their 2017 Annual Report.

The FH keeps track of the quantity and value of watches exported from Switzerland, not the quantity and value of watches actually sold. As such, just because the Swiss watch industry produced an unchanged (or greater) number of watches and pushed it all on its global distribution channels, doesn’t mean the world actually needs that many watches. A quick walk around Hong Kong reveals the mind-bending numbers of watches that were pushed onto the gray market, as well as into the stupendous number of official multi-brand and mono-brand boutiques. You could build skyscrapers from gray market inventories, not to mention the fact that it isn’t uncommon to find districts of Hong Kong where there are more watch boutiques than any other type of store. 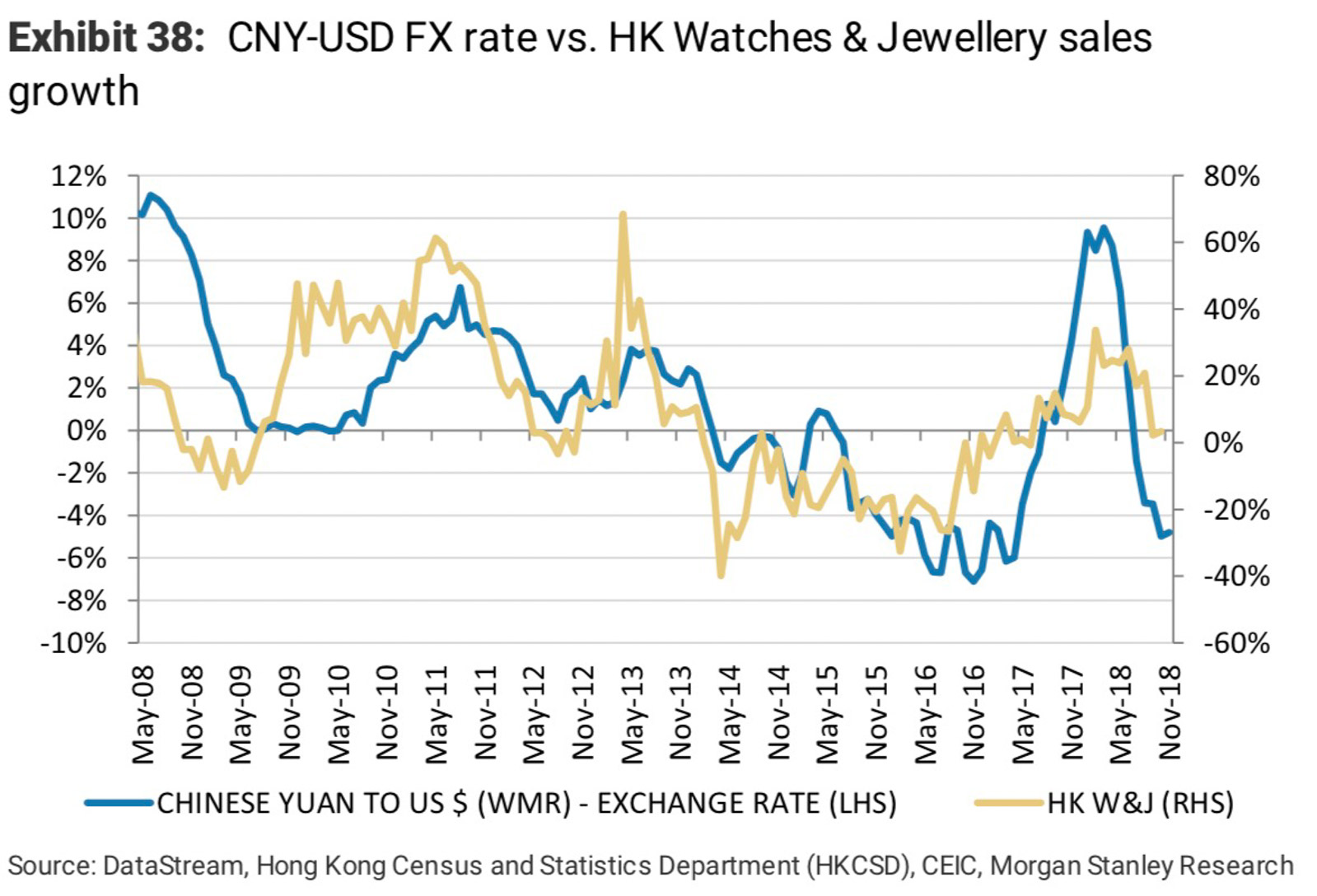 To my question, whether the FH keeps track of inventory buy-backs — Richemont runs three-year inventory buy-back programs, which also resulted in over £400 million worth of inventory repurchased from distributors and retailers — Dr. Pasche said the FH doesn’t perform such calculations and documentation. Although that is the answer I was expecting, I still find the practice surprising, as a £400 million correction (just from one of the groups, not the entire Swiss watch industry) would have a substantial effect on the perception of the overall performance. So, yeah, openly addressing less-than-flattering aspects is still very much not a part of Swiss watchmaking culture — and it likely won’t ever be.

I also asked Dr. Guido Grohmann, Managing Director of the German Federal Association of Jewellery, Watches, Silverware, and Supplying Industries (BVSU) about the drastic variations in quality among watches labeled “Made in Germany.” There are plenty of mightily impressive German-made watches out there that sport this designation — but then again, there are many others that are far from reaching that standard. I am not saying every German-made watch should be A. Lange & Söhne or Glashütte Original quality, not Nomos, but the Chinese-manufactured watches that are then shipped over and modulated in a way to barely pass the rather lenient requirements attached to the Made in Germany label. My question was about plans to tighten these rules and requirements to help increase the overall quality of “German-made” watches. 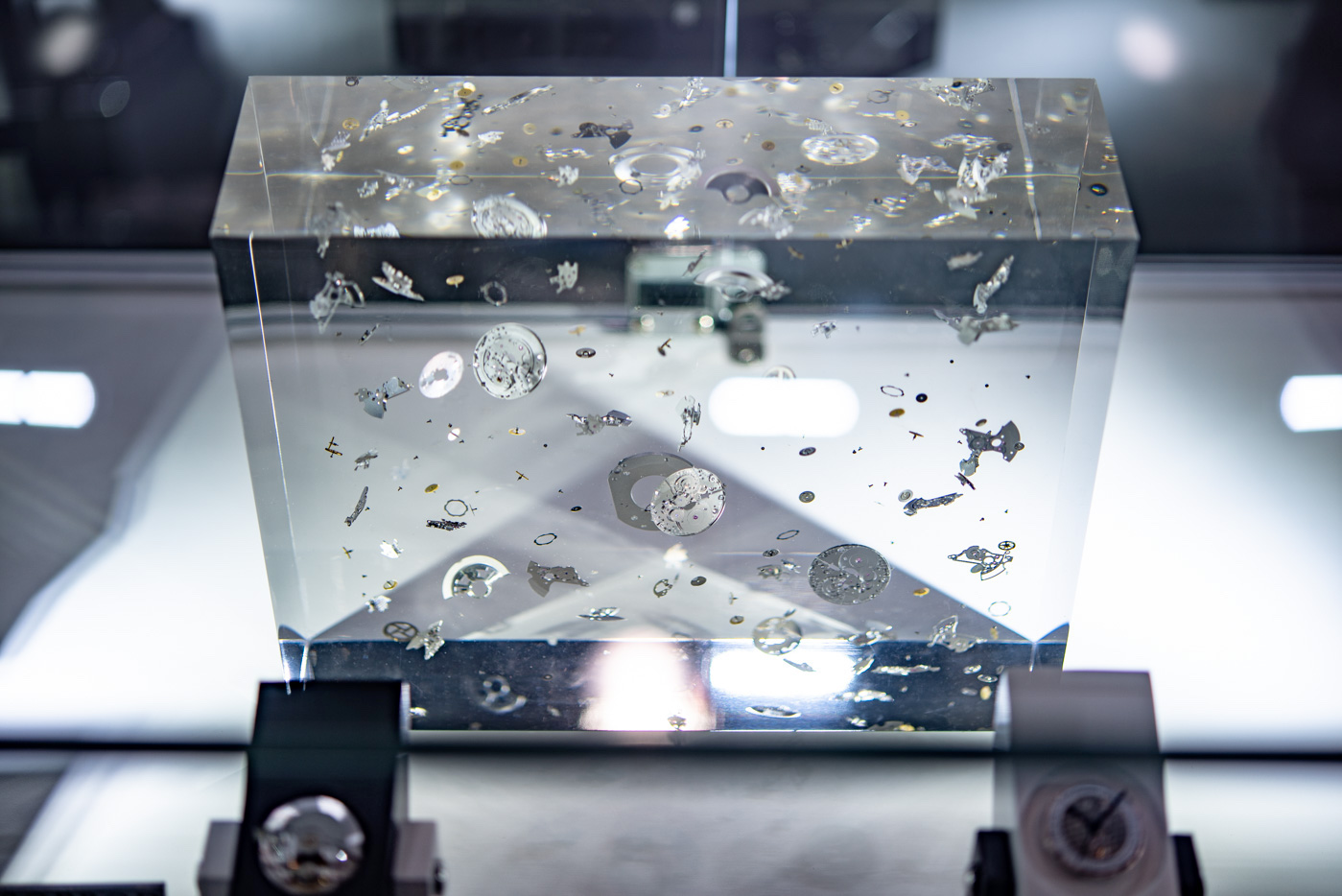 In his response, Dr. Grohmann said that tightening the requirements attached to the Made in Germany label is problematic because the label is not industry-specific but rather concerns every industry equally. He added that certain industries, such as the German automotive industry, would most certainly not welcome a stricter Made in Germany set of requirements. Alternatively, he noted, perhaps a separate label could be created exclusively for watches, and this was something that “might be interesting to look into.” Until then, any number of objectively poorly made watches can continue to degrade the nobility of the Made in Germany designation. 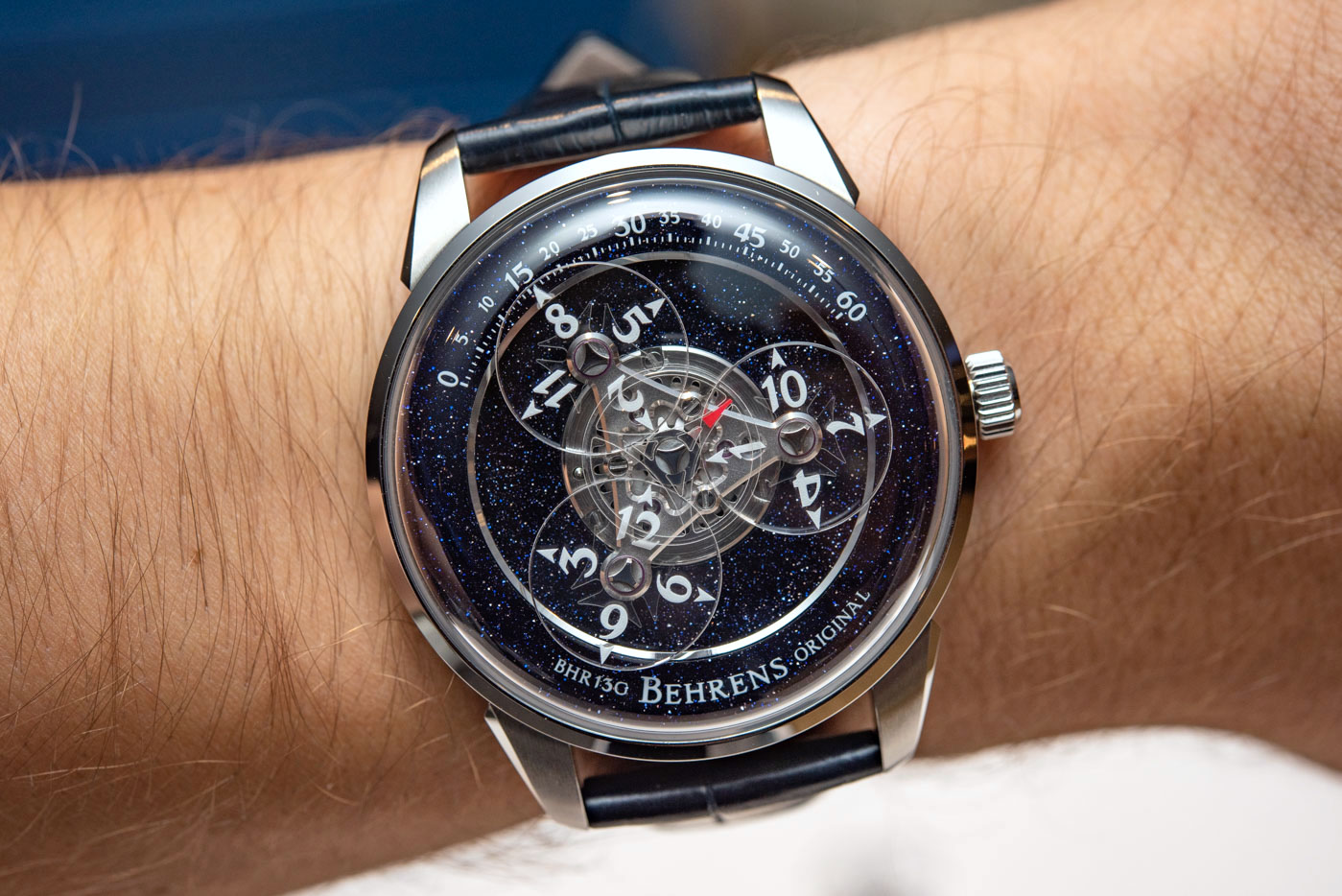 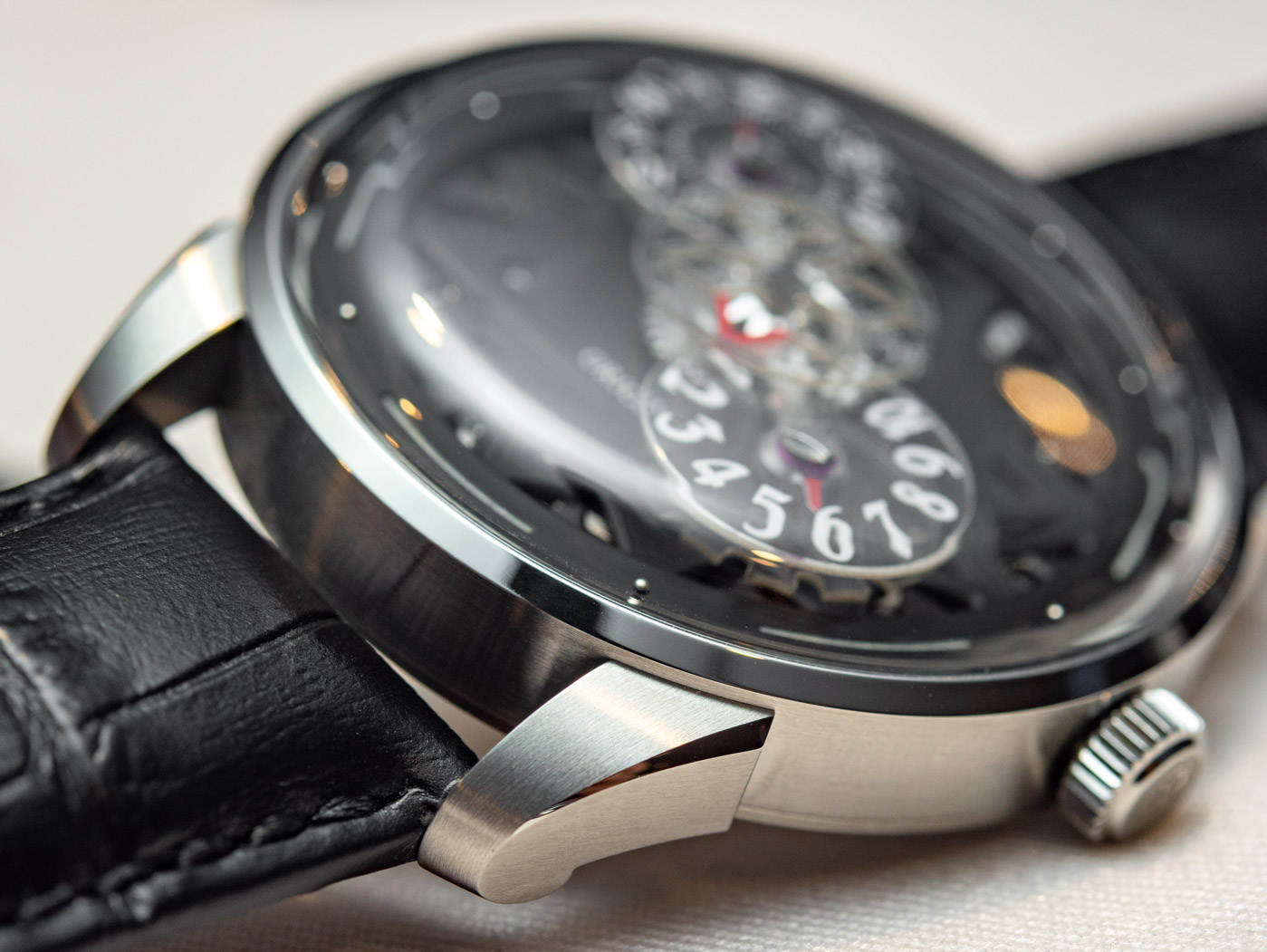 I will close off with two deeply impressive standouts of individual creativity and dexterity. Behrens Original, though a bought name with “Original” added to it, is a genuinely admirable effort in complex mechanical watchmaking and in-house manufacturing. Although the star wheel indications were cool, the lapis lazuli dial and the quality of the cases were remarkably good. The base material used, the relative complexity of the design, and the quality of execution on the cases were truly outstanding. That, combined with the creatively modified base movements, made this a brand I am looking forward to seeing in the future. 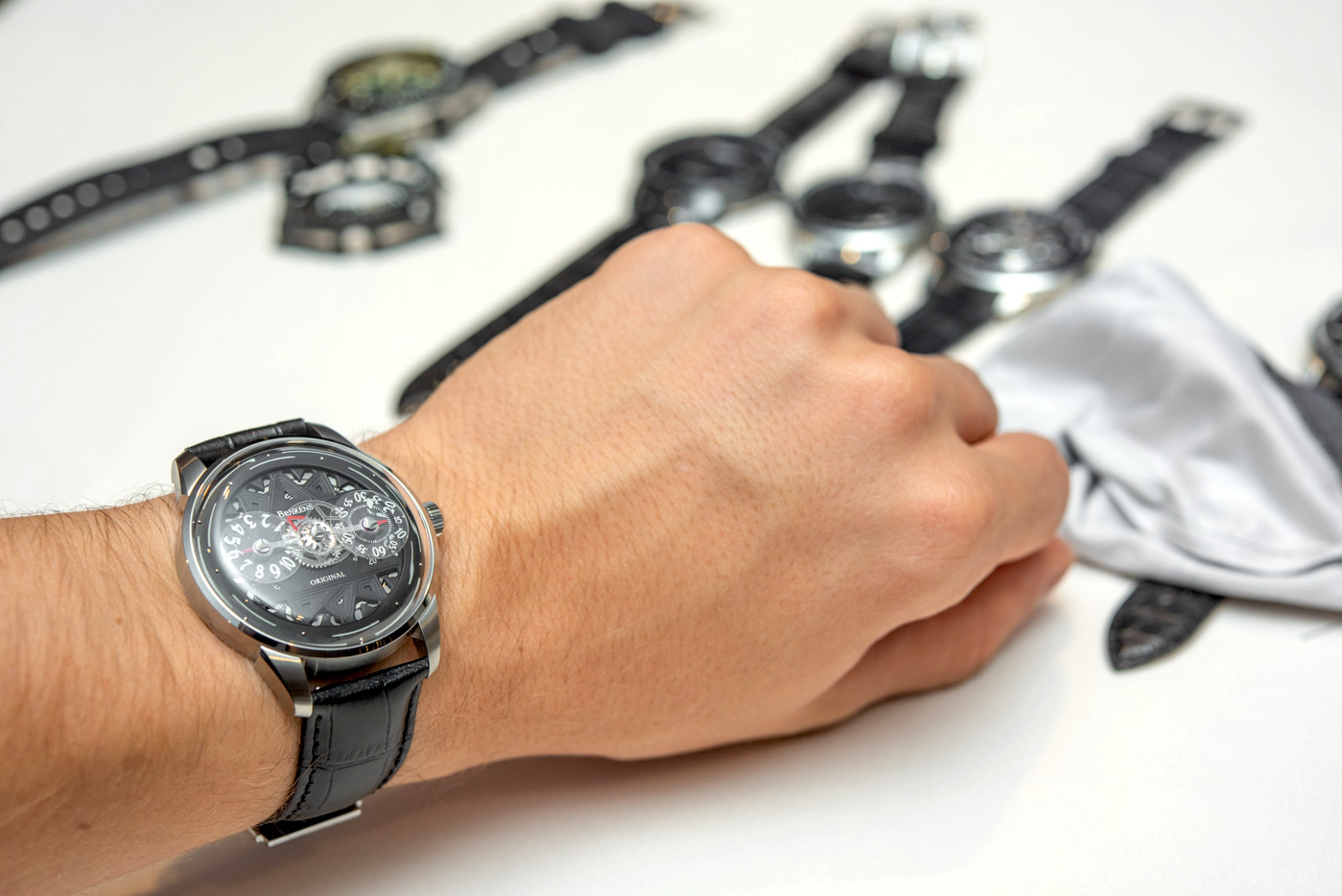 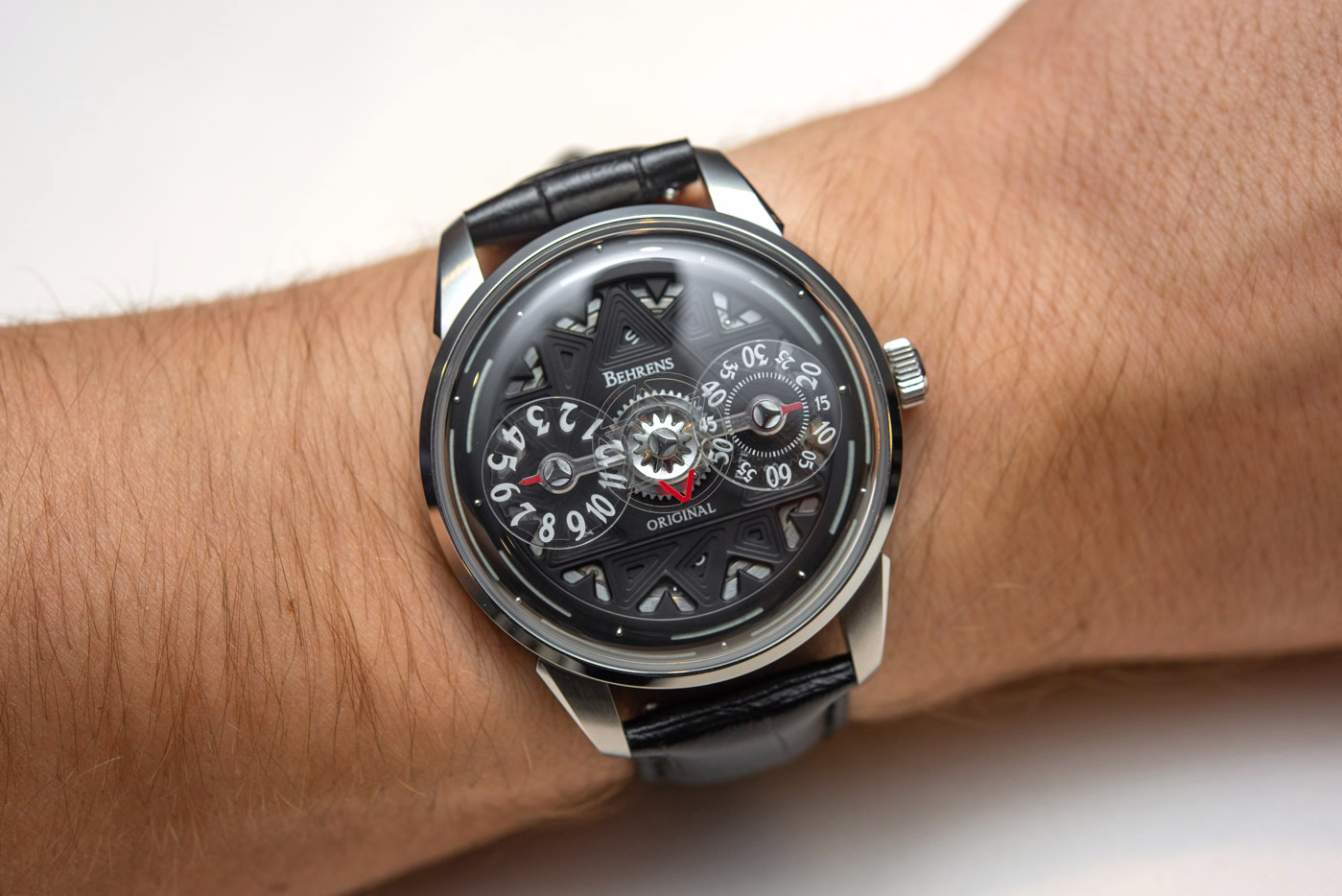 The works of the second brand — or atelier, I should say — I cannot post images of, unfortunately. Run by a talented gem-setter, his 20-strong atelier specializes in elaborately gem-setting high-end watch cases. His booth contained no decoration whatsoever, just three displays with one or two watches or watch parts in each and a place to sit. In the windows were an Audemars Piguet Royal Oak, a Patek Philippe Nautilus and a Richard Mille RM 011. All three of these watches, as well as the disassembled bezels and middle-cases around, were set with diamonds using a technique called invisible setting. Accepted as one of the most challenging setting techniques industry-wide, rows of baguette-cut diamonds, without any of the case’s metal showing through anywhere but at the very edge of the bezel and the case, are all you can see. It requires special preparation of the watch component, as well as a highly accurate and bespoke cut on each of the stones. Some of his watches had over 300 stones, of which no two were alike. 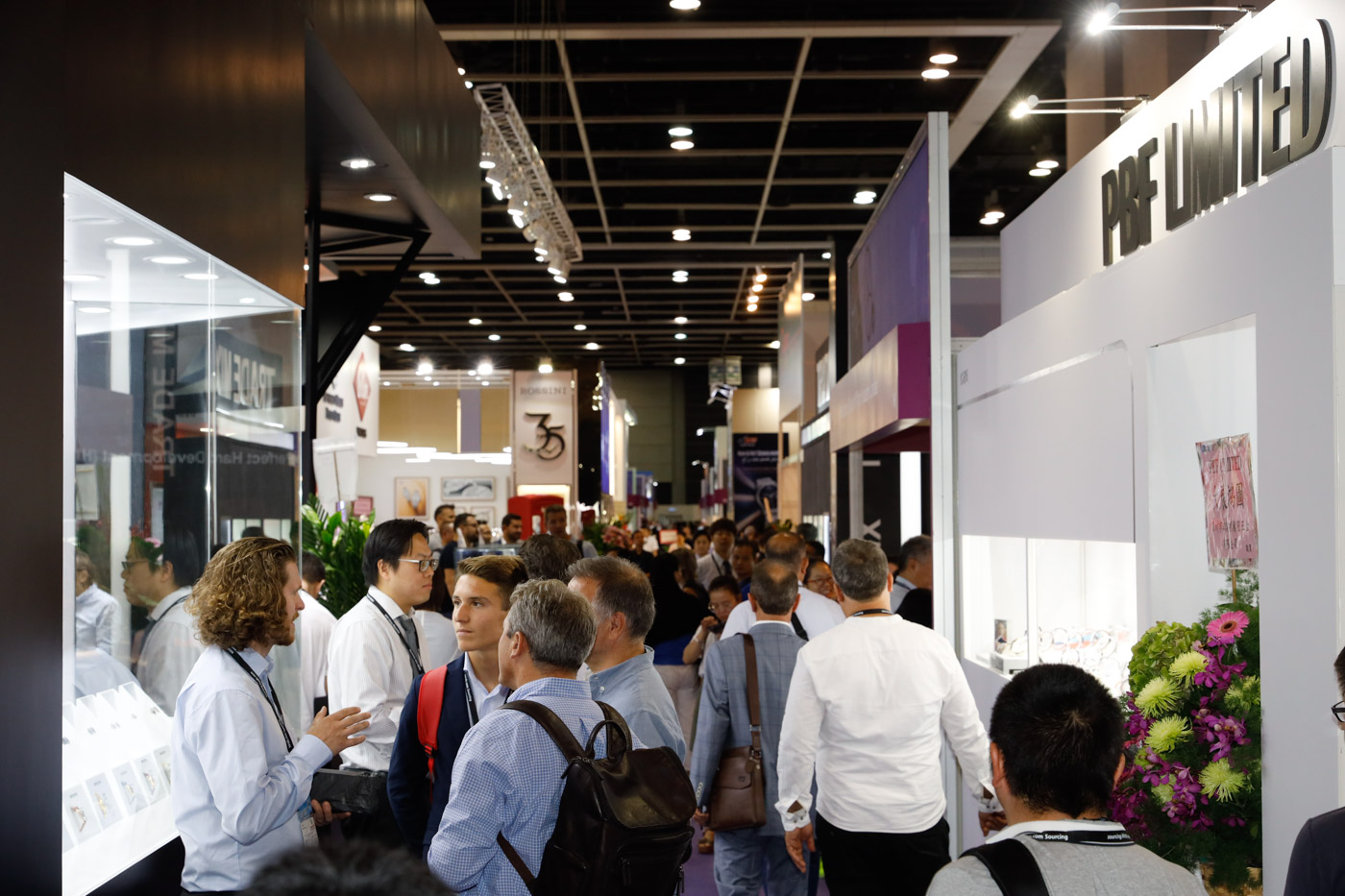 Pictures were not allowed because all the watches were commissioned pieces, and the respective owners didn’t want the watches to be photographed and shared online. James said his concerns are threefold. First, many others do what he does — bedazzling expensive Swiss watches — but do so at what he considers to be a much lesser level of quality, as well as a lower price point. Both these things make the guild of high-quality Chinese gem-setters look bad, as those who want to do better are often subject to generalizations. Second, he is afraid that what he is doing might upset original manufacturers — and so he only works through commissions whereby he is authorized by the owners of the respective watches to perform his modifications. Third, if he wants to stand out and make connections through agents and retailers, his margins between the cost of the work performed and the payable commissions to these agents are reduced massively, if not completely. 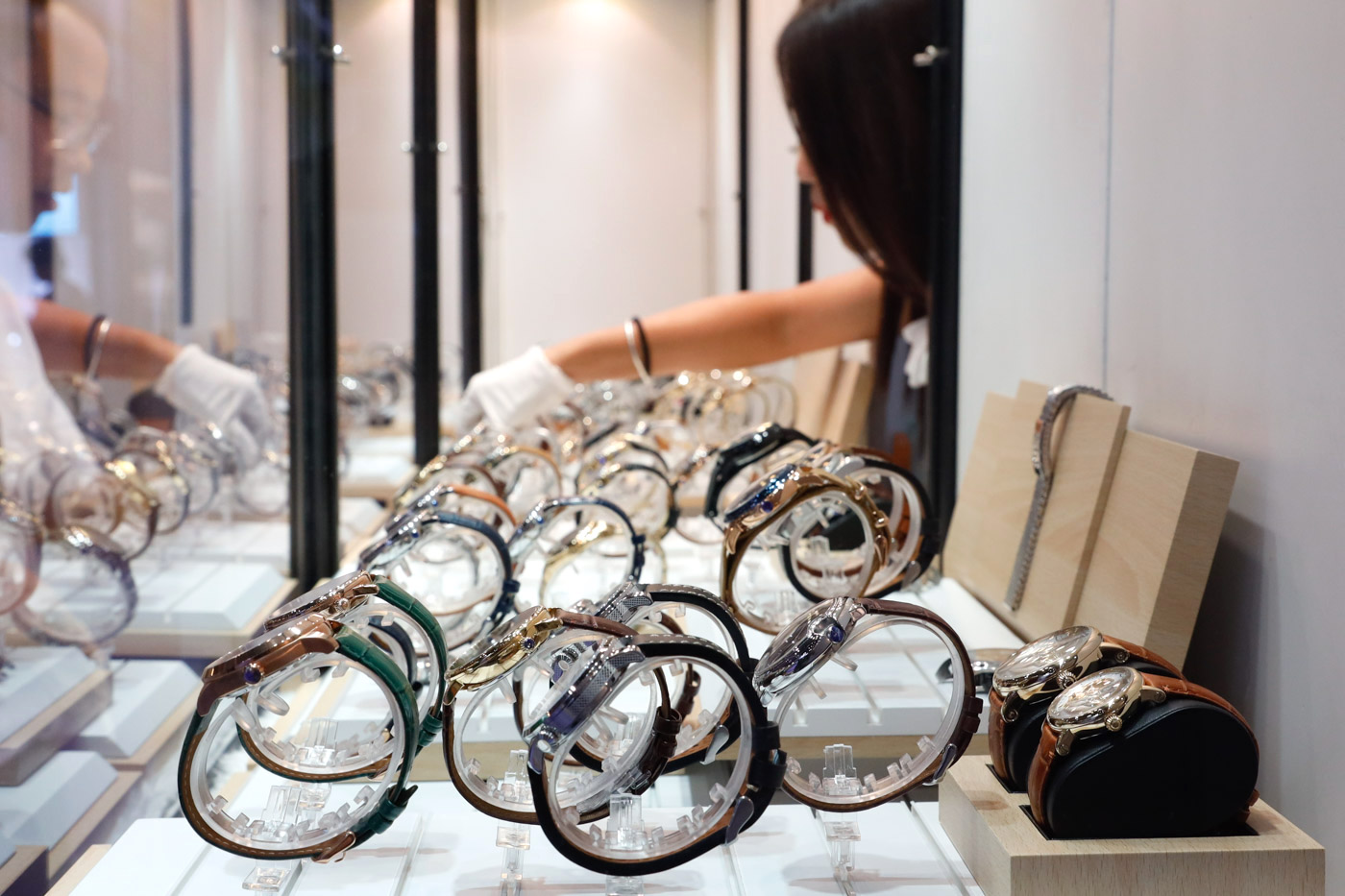 The really shocking thing is that he has actually crafted a full case, bezel, bracelet, and dial out of white gold for, let me just say, a number of those highly desirable ultra-luxury watches. He installs the original movement into these newly made surroundings, components that he makes specifically to allow him to create what he thinks is the best invisibly diamond-set design. Having seen multi-million-dollar, factory gem-set watches from most all brands, I can say that his work is not just impressive — it is shockingly good. The fact a craftsperson, still early in his career, would take on some of the most complex case and bracelet designs and — let’s be honest — replicate them to his own desires, only to then set them to such stunning standards, would be noteworthy on its own. However, to have a 20-strong team behind him to perform the work goes beyond that and indicates the willingness and ability to learn complex tasks and crafts and the guts to try to apply said skills to take on some of the best in the business. If I may, I would suggest taking note of that ability and mentality. 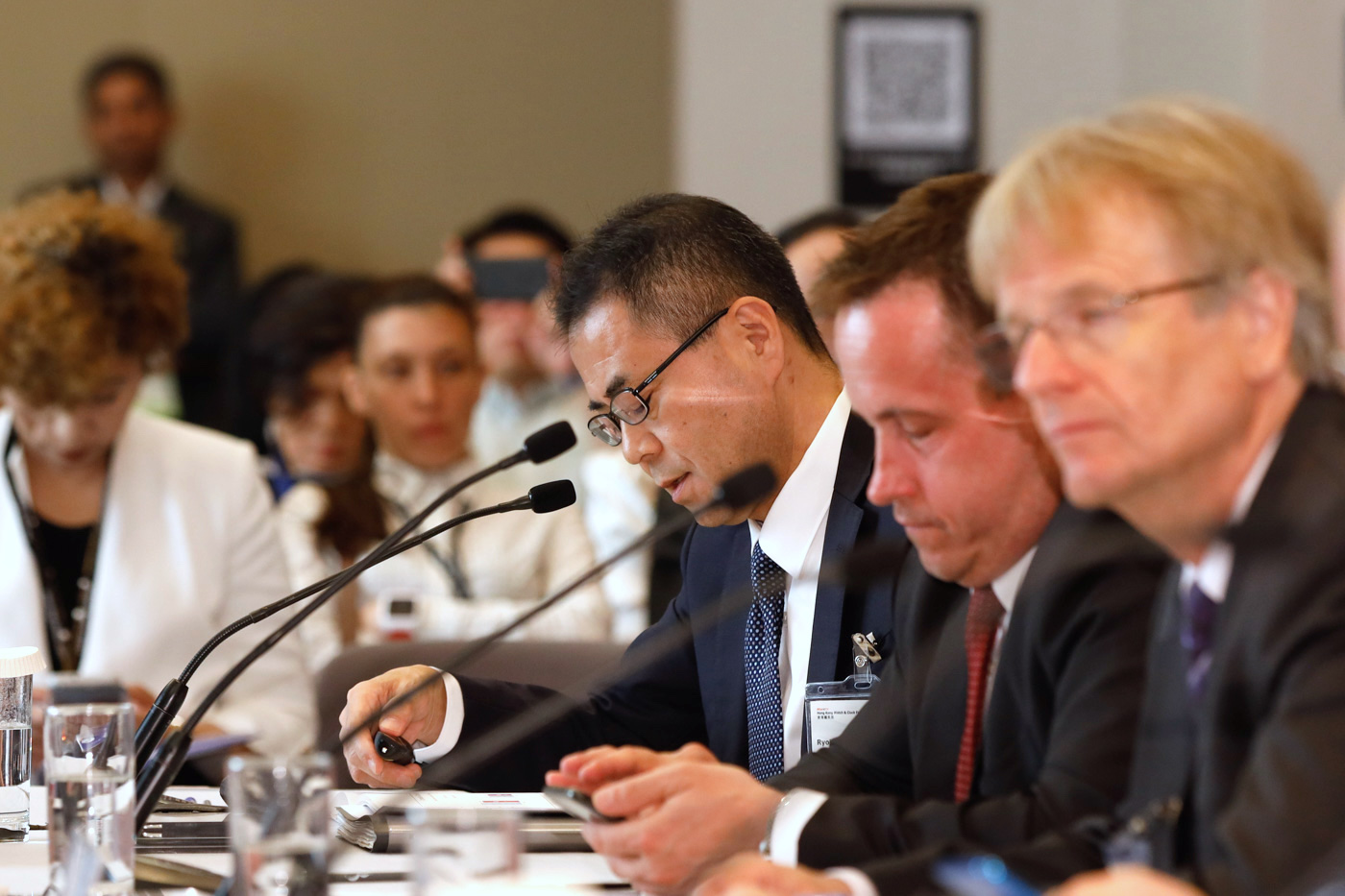 Overall, Hong Kong Watch & Clock Fair 2019 was another well-organized iteration of the show that, once again, displayed its trademark versatility and diversity across its exhibitors — as well as visitors. Through modeled “watch parades,” ceremonies, speeches, and gala dinners, we must not forget that the Fair is also a remarkable and honest celebration of an industry so much more vibrant than the staleness its European counterweight would suggest. With an open mind, there is a lot to be learned — and clearly, a lot of business to be done here. You can learn more at the website of the Hong Kong Trade Development Council.