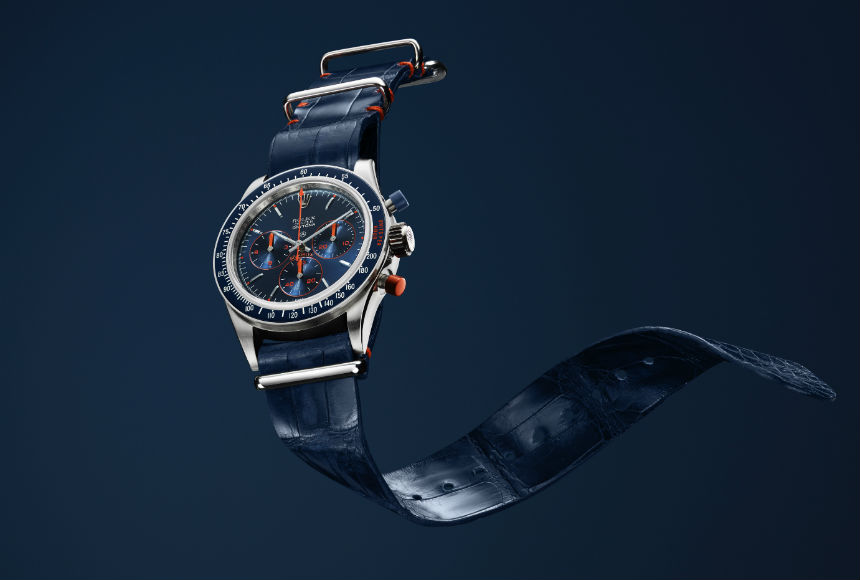 Earlier this year I reviewed the Kravitz Design X Les Artisans de Genève LK 01 Rolex Daytona watch by Les Artisans de Genève. This time they have teamed up with filmmaking legend Spike Lee by taking a base Rolex Daytona ref. 116520 and modifying it into what they call the Cool Hand Brooklyn watch with a blue and orange color scheme. Yes, as any New York (and Brooklyn) native like myself is bound to point out, orange and blue are the colors of the New York Knicks while the Brooklyn-based Nets are black & white. That being said, I think the Nets moved from New Jersey to Brooklyn only a couple of years ago. From the images of the watch, I am looking forward to seeing what the piece looks like in the metal. Bound to create divisive opinions and controversy (which arguably has given Les Artisans de Genève quite a bit of buzz), I think the Cool Hand Brooklyn’s crisp and fun design makes for a luxury product with a strong identity. 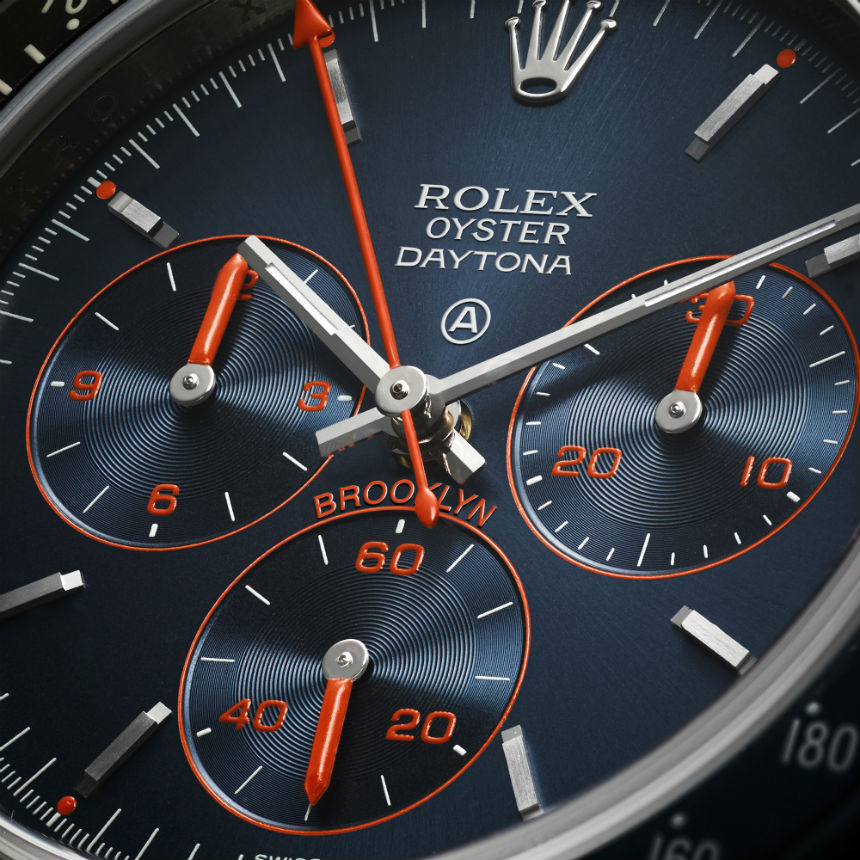 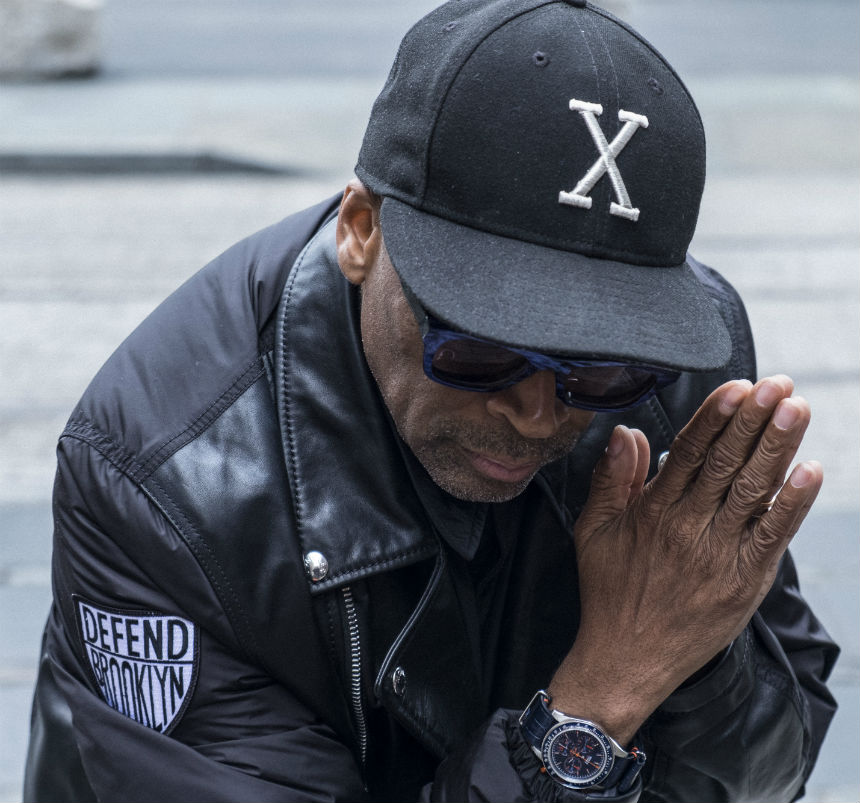 Obviously, the first thing you’ll notice about the Cool Hand Brooklyn is the blue color, which LAG refer to as their proprietary Blee SPZK color. A deep navy blue, the color is used on the bakelite bezel and dial as well as the top chronograph pusher. To contrast, the orange is used on the sub-dial rings, chronograph and sub-dial hands, the bottom chronograph pusher, and finally on the text reading “Brooklyn” on the dial. I think the decision was to keep the dial text minimal, with it reading Rolex Oyster Daytona under the Rolex crown at 12 o’clock. Those who are thrown into fits of rage or bouts of enfeebled snark by projects like this will have plenty to say, but in my opinion, the dial and case look cool, refreshing, and fun. 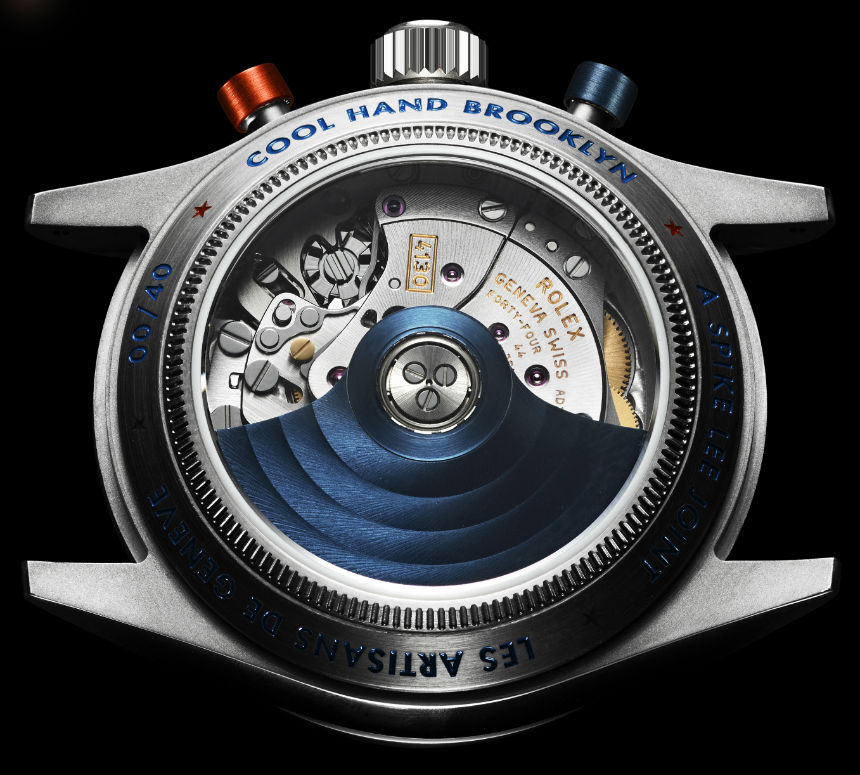 Turning the case over reveals the redone caseback with the blue gold rotor. If you’re wondering what blue gold is, then you’re not alone. I asked John Isaac, the spirited CEO of LAG, about blue gold and he explained that it is a 22k white gold that has undergone a strong treatment process to result in the deep “Blee SPZK” blue. Through the exhibition caseback, you can also see the unchanged Rolex caliber 4130 movement, which has a 72-hour power reserve and has been near-ubiquitous with the Daytona for years now. To note, I assume this movement is from the reference 116520 Daytona which didn’t have Rolex’s current Rolex Superlative Chronometer Certification. 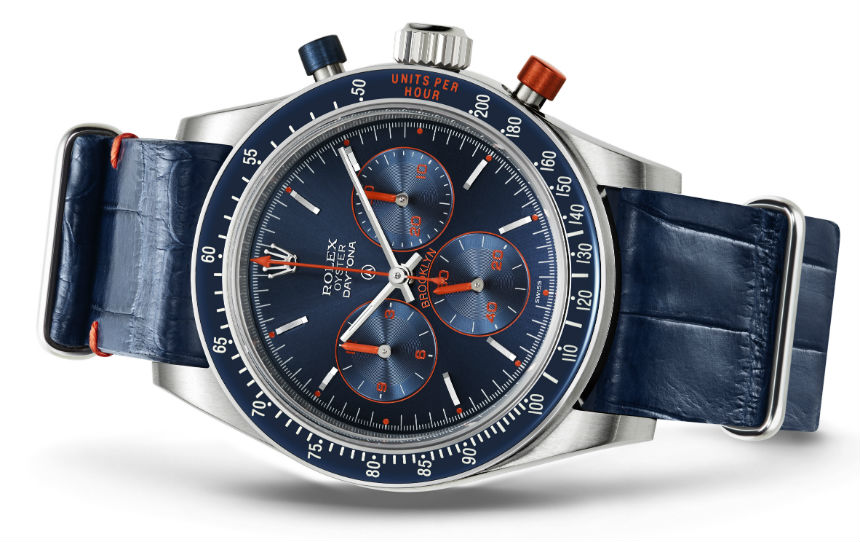 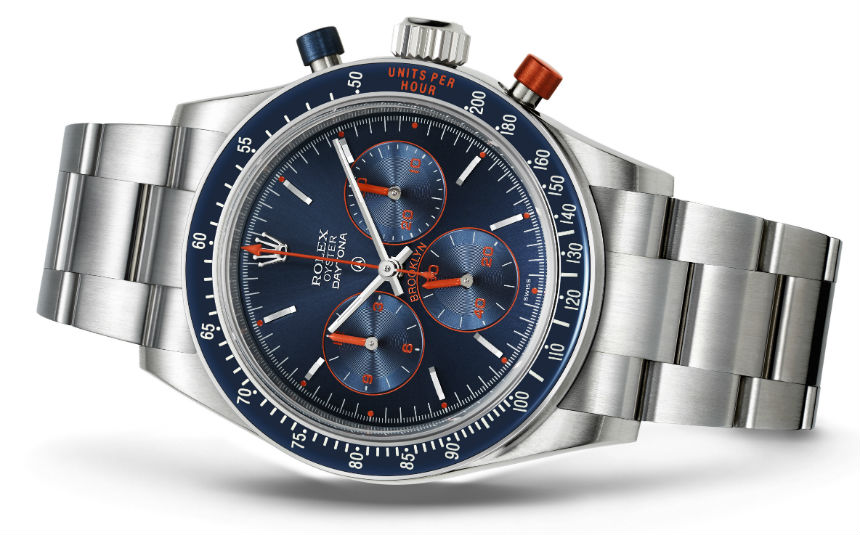 The Cool Hand Brooklyn watch comes on a NATO strap done in alligator that looks pretty neat, but I am glad the original bracelet is also included. I’d like to see and feel the NATO strap before weighing in any more, but off the bat I can say that I like it more than the military cuff strap I saw on the LK 01. Doing a NATO strap in leather is definitely an unusual move, but the use of alligator still lets the watch achieve a sporty look while maintaining the artisan niche luxury style of LAG. 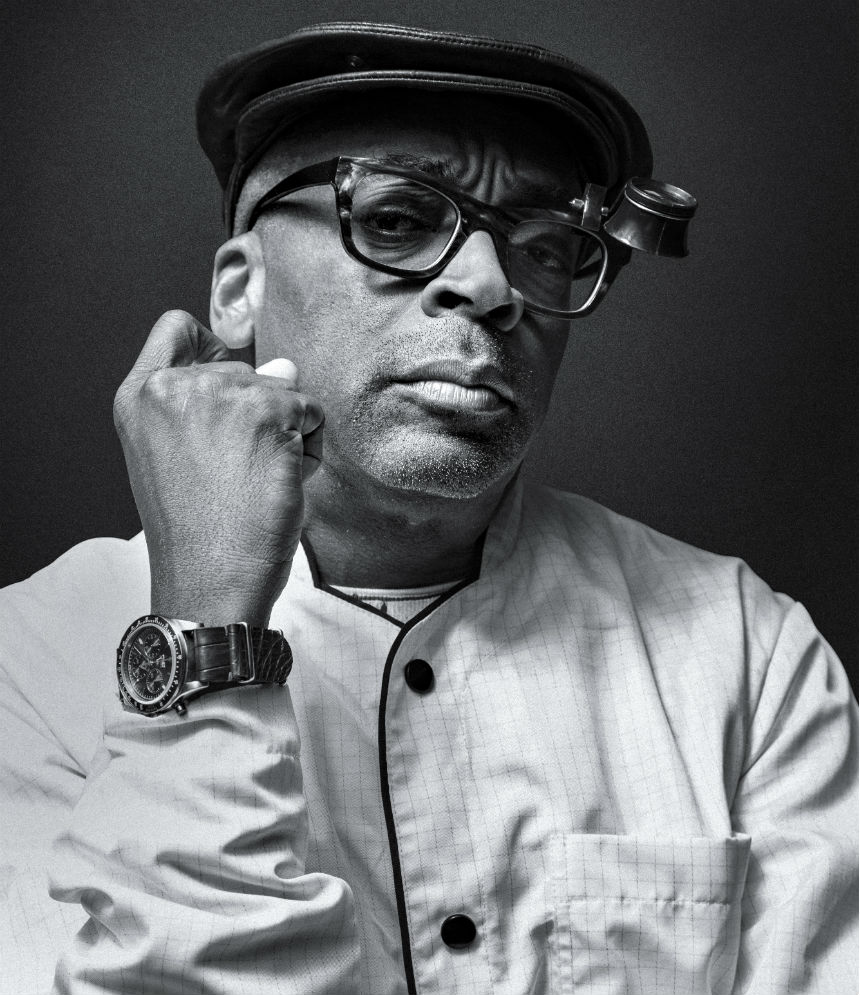 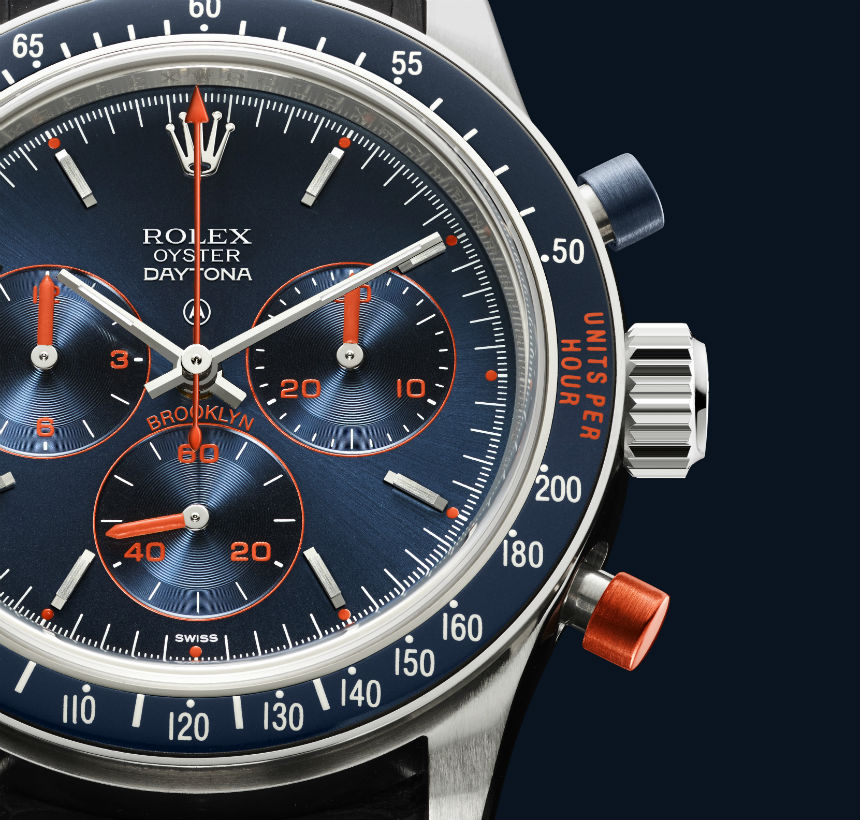 I’ve admired Spike Lee since I was young and his identity is absolutely indelibly tied to that of New York City and specifically Brooklyn. For over a decade I lived in Boerum Hill, just blocks from the headquarters of his production company, 40 Acres & A Mule. As a graduate student at NYU, I saw him around downtown as well. The guy is an institution and, to be honest, I was pretty skeptical that a watch collaboration could succeed in translating and communicating his distinctly creative identity but I’ve got to say I am pleasantly surprised. I can’t totally gauge the success until handling it in person, but if the execution and finish is on par with their LK 01 watch I reviewed, then Les Artisans de Genève have a truly unique product here. 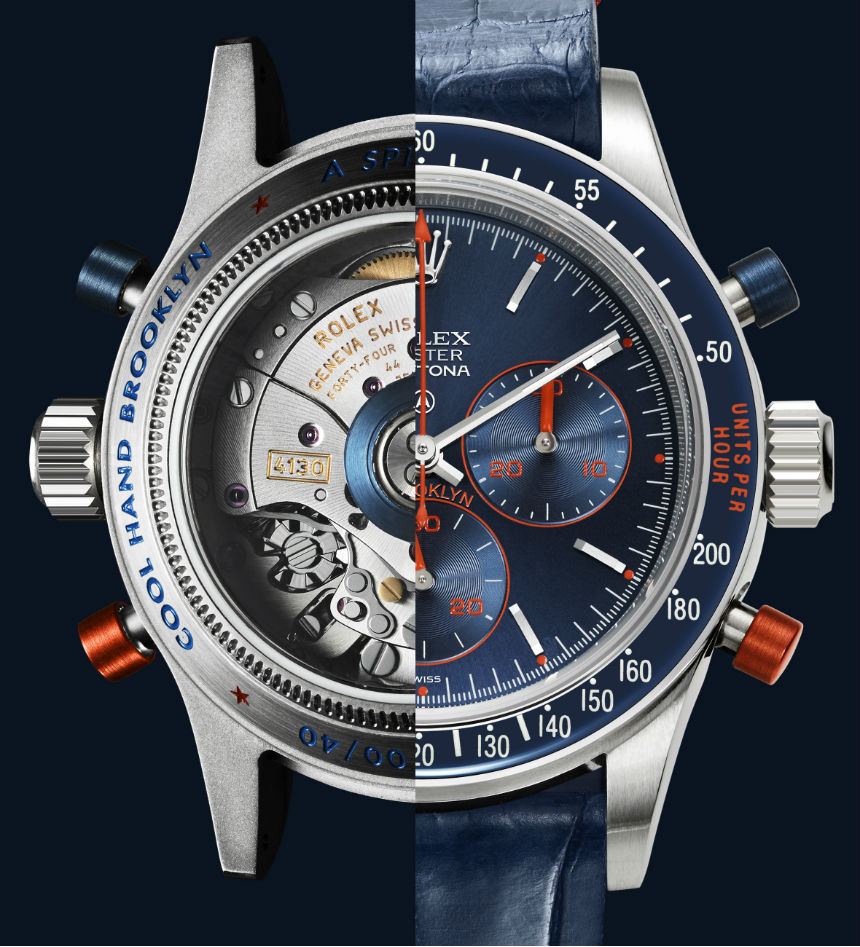 The Les Artisans de Genève Cool Hand Brooklyn Rolex Daytona watch is going to be limited to 40 pieces that are being made on request with a 50% deposit, coming with a certificate of authenticity and a 5 year warranty. That deposit is not going to come cheap as the price of the watch is $39,500. lesartisansdegeneve.com