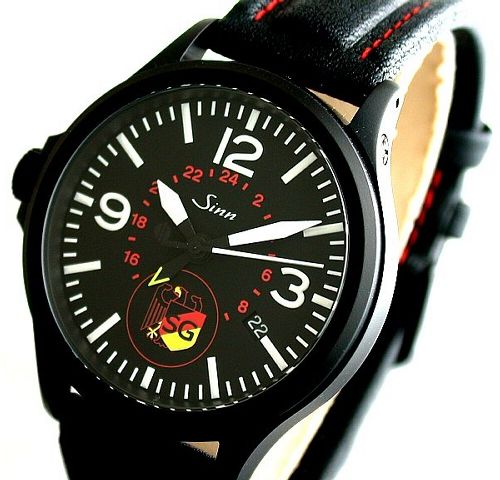 Like most German things, this limited edition (only 150 pieces) Sinn watch has a complicated and confused name, but that has no effect on it being a very cool watch. Sinn took an 856 UTC watch with PVD coated Tegimented steel (specially made steel that is extremely hard and scratch resistant), and made a couple of special modifications. It would first be good to know that Sinn watches are the preferred timepiece for most of Germany’s hardcore police enforcement, military, and other “hardcore” agencies. This version is made in honor of the German Bundeskriminalamt – Sicherungsgruppe (SG), which is the Security Group of the German Federal Bureau of Investigation, also called BKA). While not an exact analog, this of this watch as being made for the German FBI, which is called the BKA.

Sinn added a cool looking emblem on the watch to signify the message of this watch. Pictured is a very Teutonic looking eagle with a German flag colored shield, and “SG,” which stands for security group (as it would be in English that is). I am typically not a fan of placing such logos or emblems on watch faces, but I am willing to make an exception when it adds character to a watch. Further, Sinn actually has some credibility because a lot of people in the BKA actually wear Sinn watches. The red tones of the emblem carry over into the 24hour dial numbers, and makes for a nice effect.

Another aspect of this limited edition watch is the great looking back strap with red stitching. Sinn always makes well-padded straps, and this is no exception. The added red color trim all over the watch really enhance the look of it and go well with it being a schwartz edition (which Sinn refers to all their PVD watches due to the black color). You’ll agree the colors are nice. Lastly, Sinn place the crown on the left side of this watch in the limited edition. This assists from keeping the crown from getting damaged or digging into your hand during strenuous usage.

The Sinn 856 series itself is a nice watch even without the limited edition enhancements. You can rely on it being a rugged watch with many features to ensure longevity. Of course the Tegimented steel is an example of this, as it the internal humidity capturing capsule, 200 meter water depth resistance, and antimagnetic protection. Features of the automatic mechanical movement include a date window at the 4 o’clock position as well as the UTC (GMT) hand for a second timezone, in addition to the incredibly legible representation of time.

I do like this watch a great deal, and because there were only 150 of them, each is sold out. However, one is available on eBay right now at a reasonable price. I’d say it is worth the price to snatch up one of these unique Sinn watches.