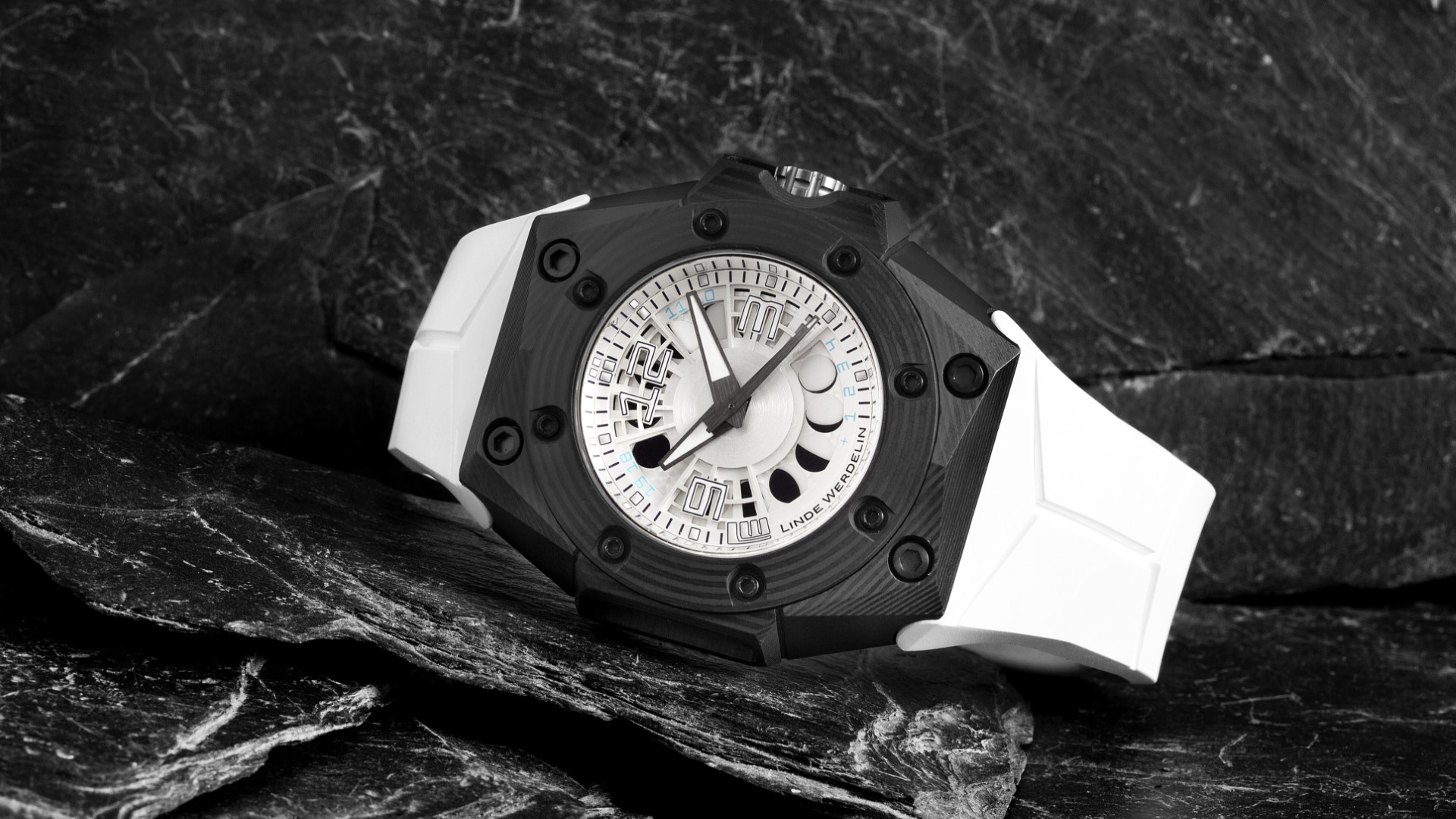 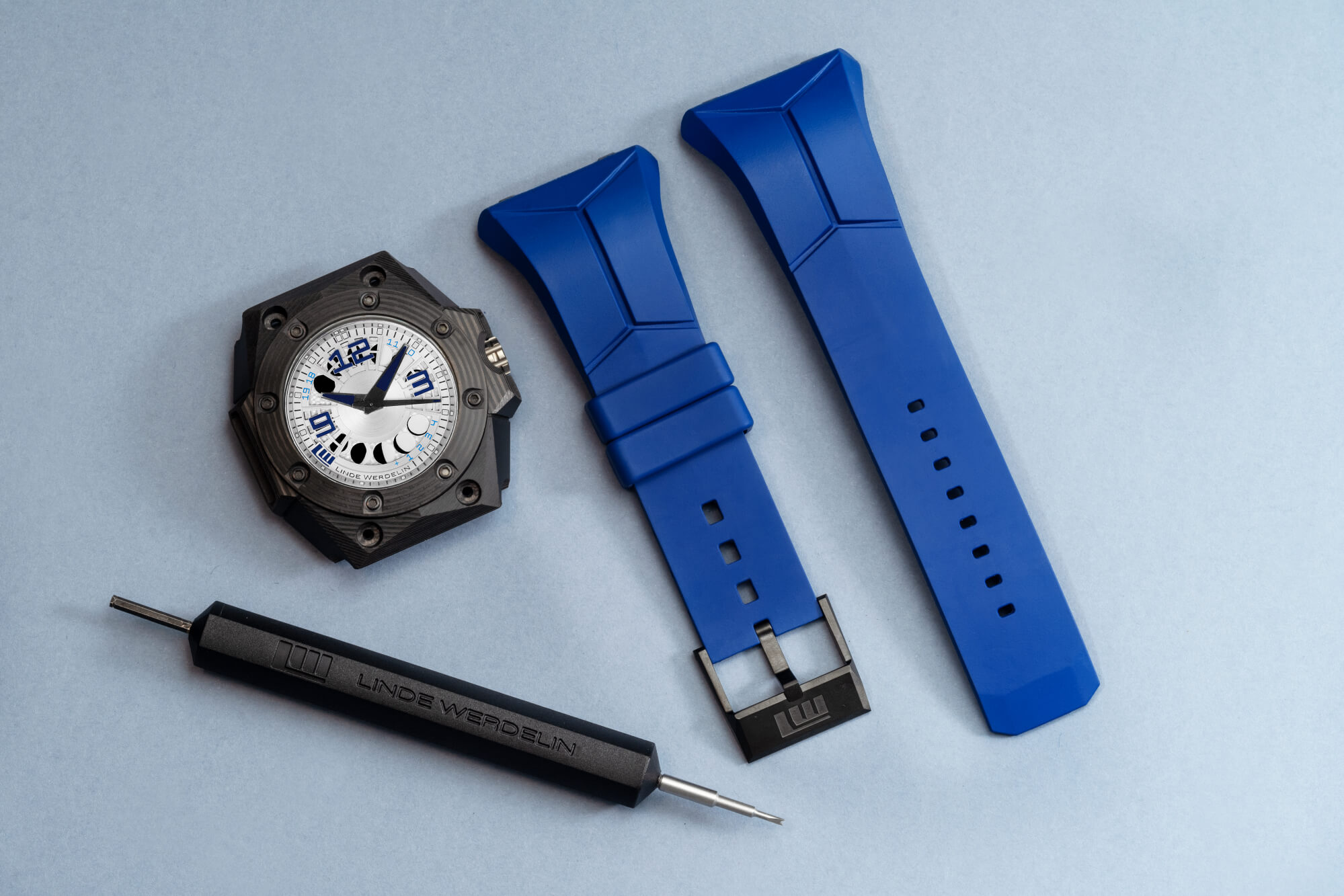 Allow me to get philosophical for a moment. How do you create a unique watch? What about an entire brand of unique watches? Hasn’t everything been done? Is everything just a new combination of old things? Perhaps it’s not about creating something entirely new, but in the changes that are made to the things that have already been created, and how those things are put together. That’s how I think about brands like Linde Werdelin. There are other bold, angular, faceted watches. Other watches have rubber straps. Other watches use innovative materials. It’s how Linde Werdelin has executed these and a number of other ideas that make its watches unique. The new Linde Werdelin Oktopus Moon 3DTP is a perfect example of this idea. It’s the latest evolution of the brand’s adventure-driven design language and improves on its already daring Oktopus watch collection. 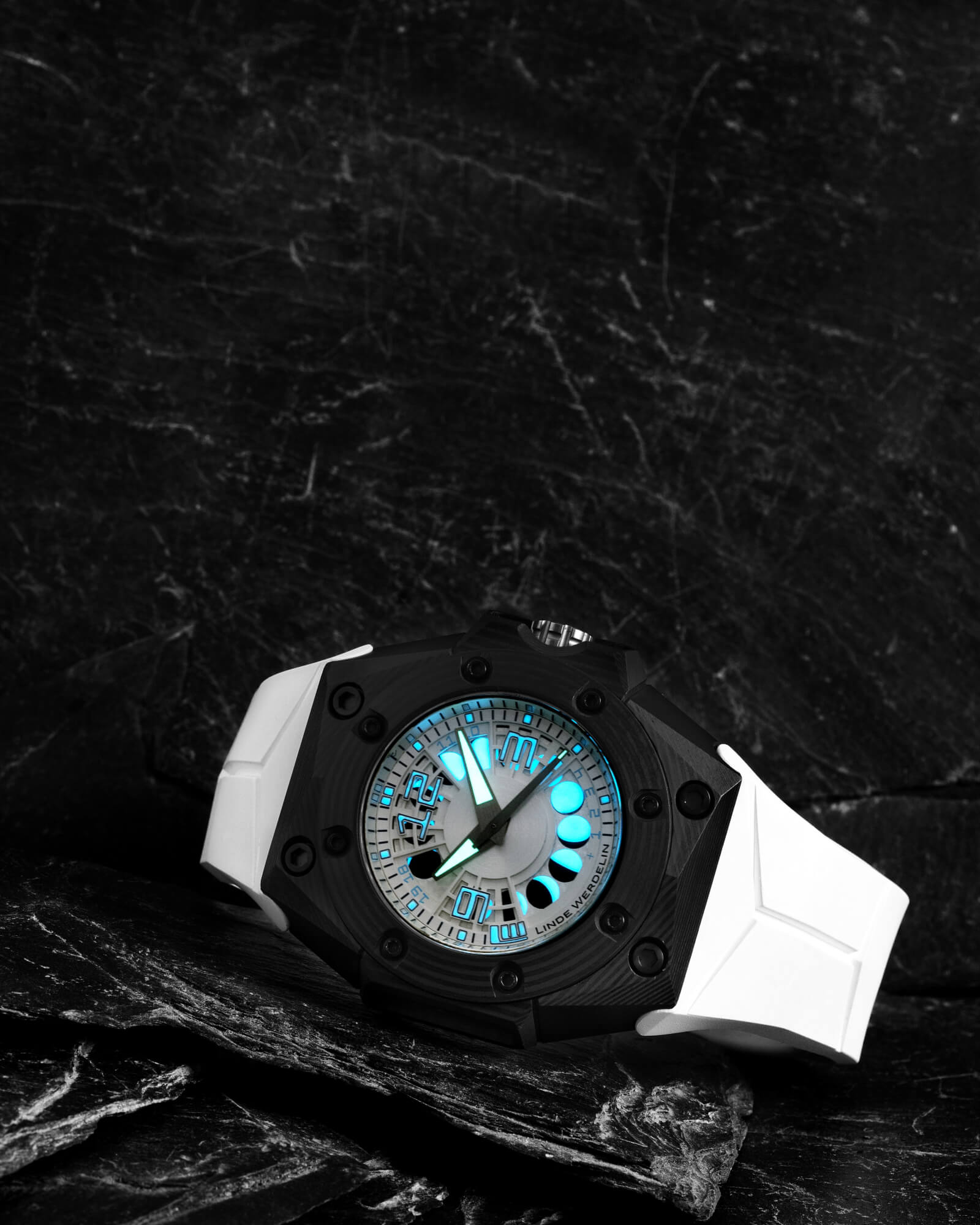 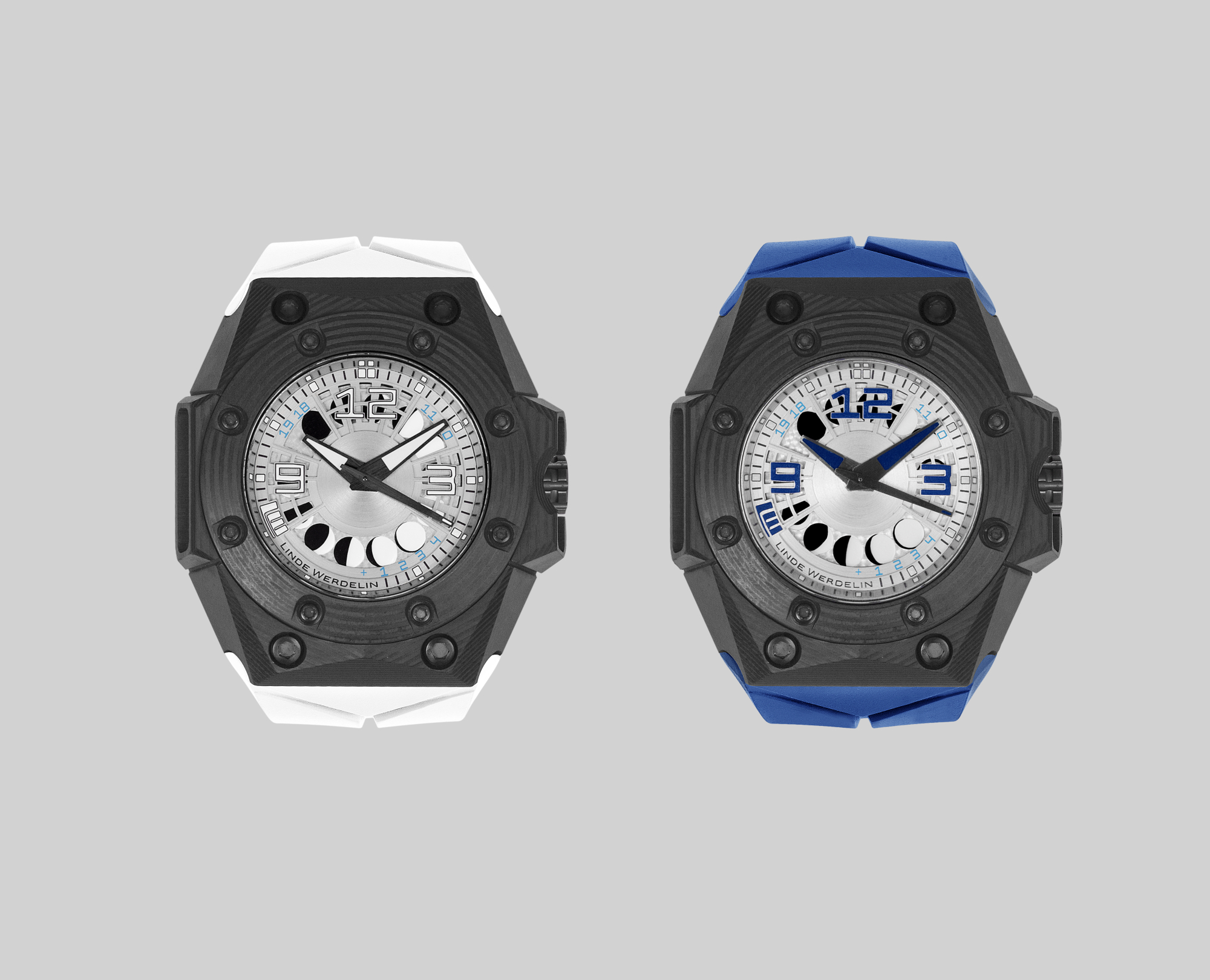 Don’t let your eyes deceive you. The Linde Werdelin Oktopus 3DTP may have a chunky look, but that doesn’t mean it’s huge. In fact, the case has a 44mm diameter but is just 46mm lug-to-lug with a height of 15mm. It’s undeniably chunky, but those dimensions are by no means unwearable, and the rubber straps that emerge right from the case are a likely aid in a comfortable experience on the wrist (the straps can be easily swapped thanks to the visible DLC titanium hex screws that attach them to the case). Moreover, the entire case is constructed of three-dimensional thin-ply (3DTP) carbon — prior models had ceramic bezels, so this is the first full-3DTP Linde Werdelin watch — and weighs in at just 60 grams. The case is constructed by layering thin sheets of carbon and then sculpting the resulting mass into the sharp-edged, wide-faceted form you see here. The final step involves the addition of the carbon bezel, which features a circular satin finish and is attached with DLC titanium screws. The watch achieves 300m water resistance thanks in part to a screw-down titanium crown set into a case-side cavity. That area and its 9 o’clock counterpart were originally included in the Oktopus design to allow for owners to dock their Linde Werdelin sports computers. (LW used to offer a dive computer and a land computer for all your standard activity tracking, though there’s no sign of them on its site any longer.) The one concern I would have here is the ease of operating a crown that, in images, appears almost completely recessed. 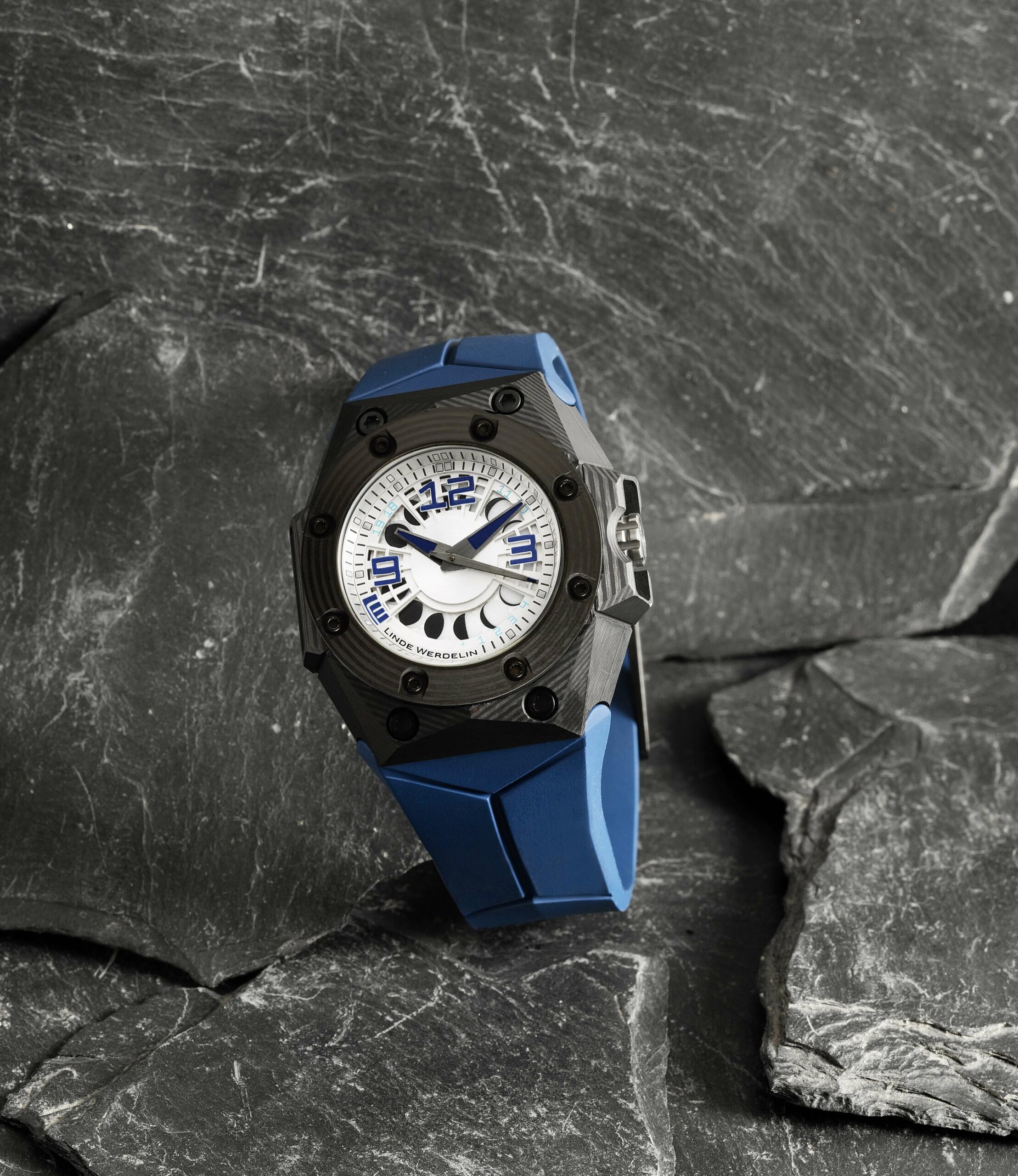 Seen through a sapphire crystal, the dial of the Linde Werdelin Oktopus Moon 3DTP is its own thing to behold. While I’m certain there’s a more romantic way to put it, the skeletonized dial and its vertical chapter ring immediately reminded me of the basket in my salad spinner. The skeletonization may be a lot for some, and legibility may suffer slightly, but it is better than some of the brand’s other dials, which appear almost unreadable due to the intricacies and lack of contrast. On the Oktopus Moon 3DTP, the outer minute track is met by a vertical chapter ring, with the former having lume plots at the hours. Stepping in, the main dial features cutouts along the circle of the moon phase, including a wide aperture on the dial’s bottom half. The oversized 3-9-12 numerals and hands have matching Super-LumiNova (in blue or white), and the hands are made of the same titanium as the crown with a satin finish. The fully lumed moonphase has been updated from the photorealism of prior models to a graphic phase representation here. It’s a fitting change for this more starkly toned model, but it doesn’t resolve the evident issue of reading the moonphase easily. Much like a panoramic date window, several phases of the moon are visible in full in the wide lower aperture (LW says that when there is no moon in the sky, no moon will be shown on the dial, so that phase is clear). While the dial has labels for the upcoming phases in blue type, it’s not immediately clear which position represents the current phase. Narrowing the lower aperture so that it clearly frames a single phase might resolve this issue and still allow for the same exciting skeletonization. Here’s an interesting tidbit, though: The limited edition of 59 is based on that number being twice the full cycle of the moon, 29 1/2 days. Whatever limitations there may be, the overall execution of the dial captivates. 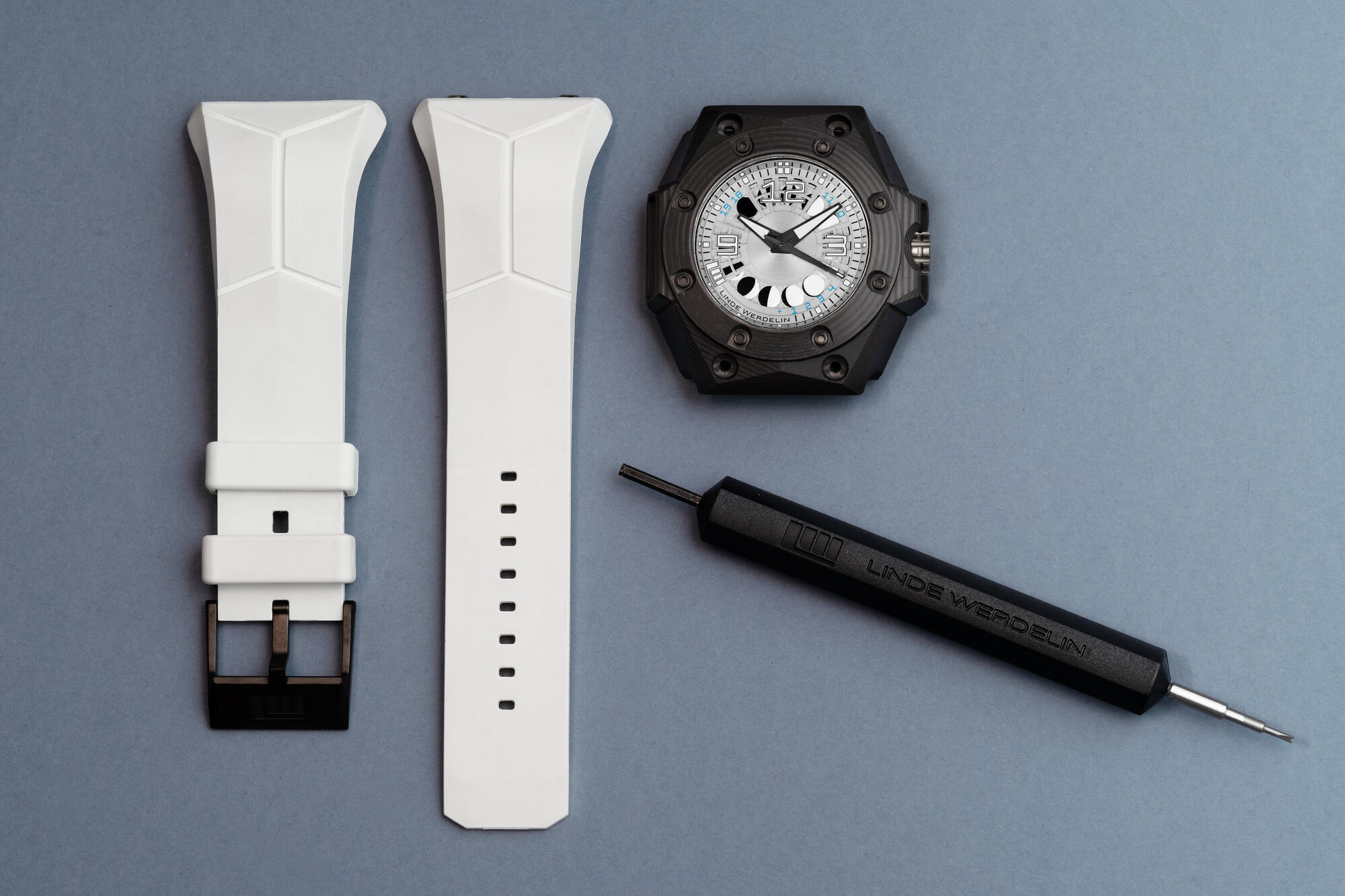 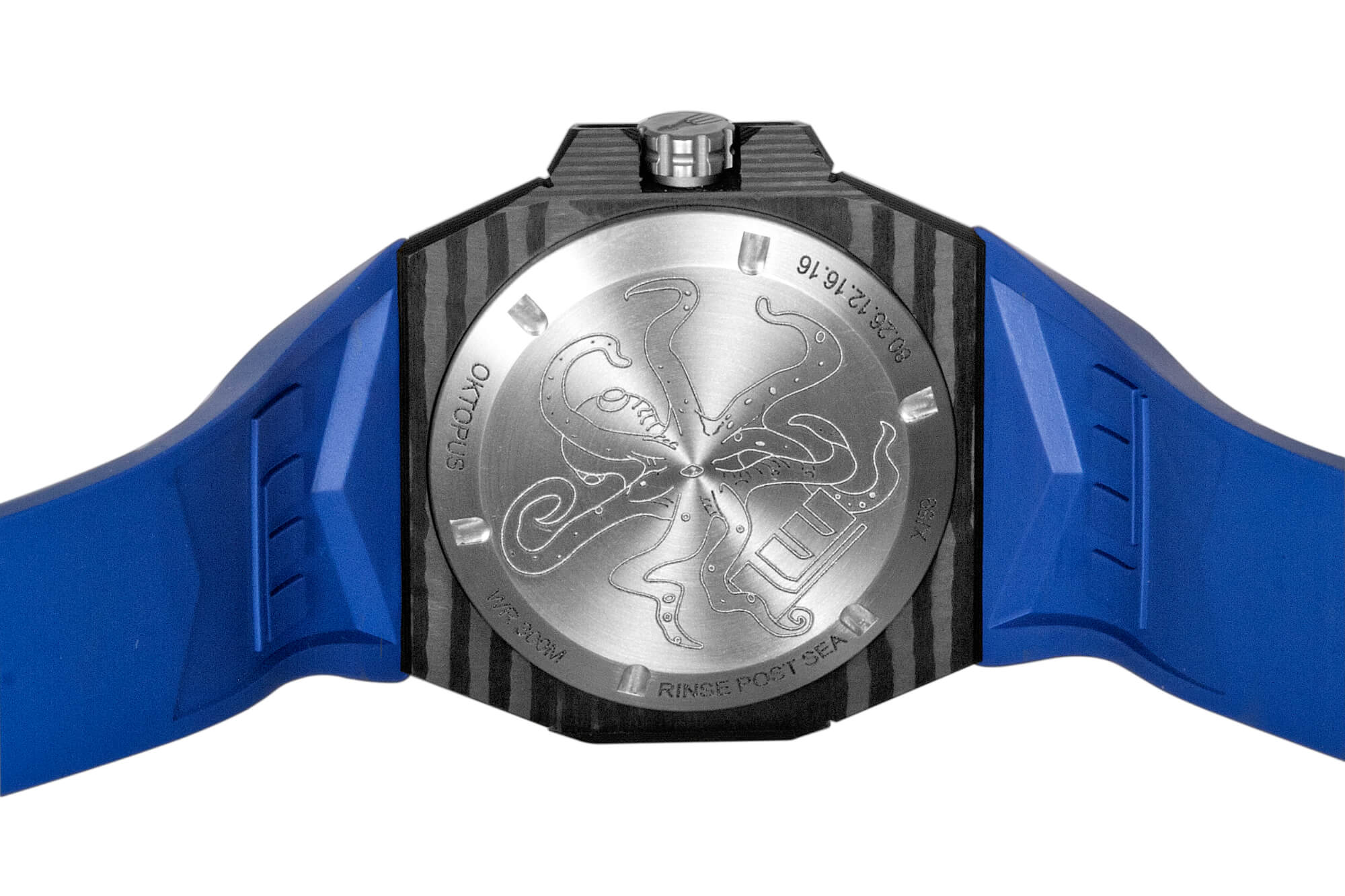 The engraving on the titanium caseback admittedly has an amateurish execution in the photos (previous Oktopus models have a fully debossed octopus which seems far more substantial). Underneath the screw-down caseback is what Linde Werdelin describes as a “Bespoke LW calibre with in-house moon phase complication.” It’s known that other Oktopus models have movements made for the brand by Swiss movement manufacturer Concepto, and there’s no reason to think that’s not the case here. The caliber herein features 23 jewels, a power reserve of 42 hours, and runs at 28,800 vph. Considering that Concepto also makes movements for brands like Jacob & Co. and Bulgari, there’s no reason to think this LW caliber is of anything other than the highest quality. 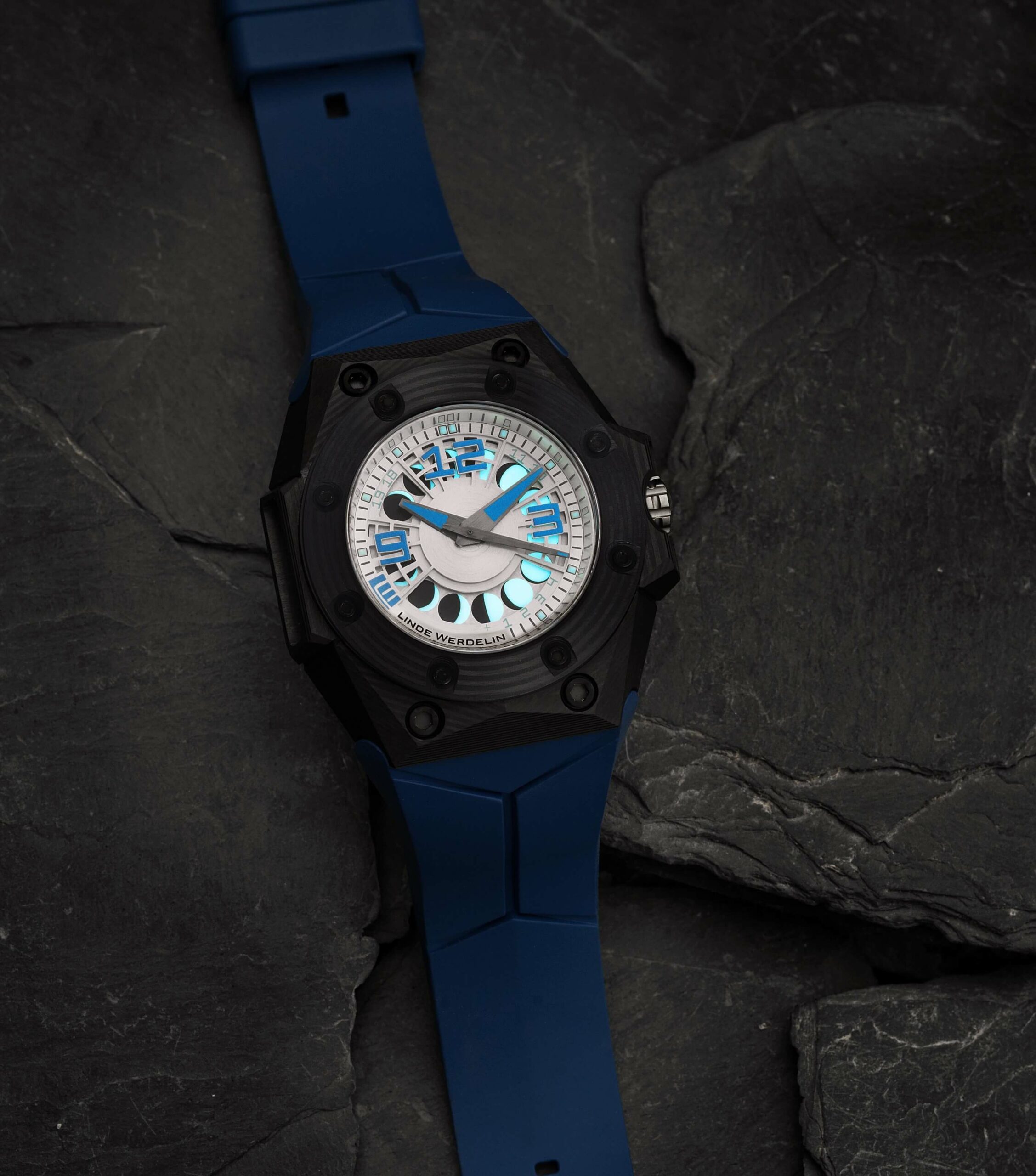 There’s no point in arguing that this watch is for everyone. The brand makes 500-800 watches a year — even without the polarizing design, they can’t be for everyone! The Linde Werdelin Oktopus Moon 3DTP offers those who are ready for such a striking watch an opportunity to have something unique, where the whole seems to be greater than the sum of its parts. There’s something to be said for committing so fully to a design aesthetic, and this watch has all the elements that define the brand. The Linde Werdelin Oktopus Moon 3DTP is limited to 59 pieces of each colorway and priced at $19,352 USD. You can learn more on the Linde Werdelin website.