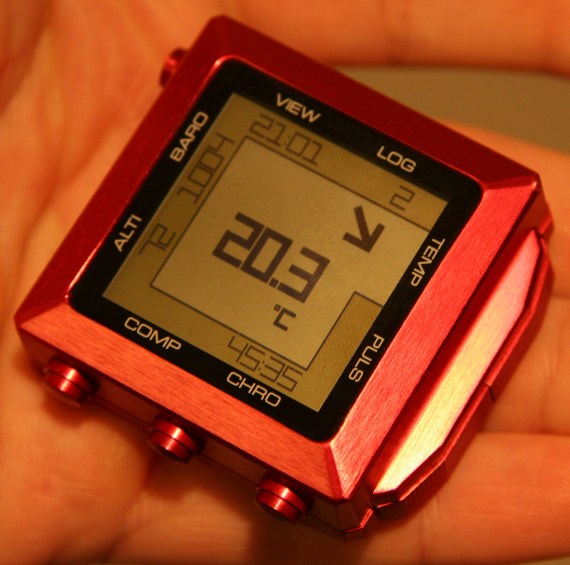 “Instrument” is probably the best term to describe this nifty little device. It packs a lot of functionality, probably more than you’ll ever use. The best way to describe it is a multifunction wristtop computer (term borrowed from Suunto) suitable for extreme conditions that can actually help you survive if you use it properly. The Land Instrument is made by Linde Werdelin, a manufacturer of primarily… luxury watches, and interestingly enough, the Land Instrument is more reasonably priced than you might suspect given its pedigree and functionality. The current price is about $1,100.

The name really sums it up: “Land Instrument.” It is meant for land based operation as opposed to Linde Werdelin’s upcoming Sea Instrument. Specifically, the functions are focused on cold weather, high altitude exploration. For example, it features such notices as an “avalanche warning” or “frostbite warning.” This might seem gimmicky, but using the external thermometer and internal barometric pressure gauge and altimeter – as well as its logging functions – the Land Instrument can actually give you accurate information that is worth paying attention to (and can save your life in dire situations).

To help you understand the full functionality of the Land Instrument, it is best to go over everything it does and what it comes with. Let’s start with what is actually contained inside the instrument itself, and then move on to the included accessories which contain external sensors. Inside the land instrument is a 3 axis compass with a tilt sensor (this provides you with a compass as well as ascent and descent monitoring), and an atmospheric pressure sensor (for barometric pressure and altitude reading). There is also the internal low power consumption 16 bit RISC computer with 4Mb of storage that has wirelessly upgradeable software. While the storage might seem scant by today’s device standards, this is plenty to store the log data for all the sensors. Then there are the external sensors. First is a carabiner clip with a temperature sensor built in. This accessory does two things rather cleverly. First, it serves as a connecting point for the Land Instrument itself. Meaning you attach the Land Instrument to the clip and it can hang off of a belt or bag. Second, the internal thermometer in the clip communicates wirelessly with the Land Instrument. Not having the temperature sensor in the Instrument itself is helpful because it allows you to get an accurate reading of the ambient temperature. If the sensor was included in the Land Instrument itself, it would potentially be influenced by your body heat (as is the case with virtually all other temperature reading watches). The other included sensor is a heart rate strap that goes around your chest. This also connects wirelessly to the Land Instrument and provides you with accurate heart rate data every 5 seconds. 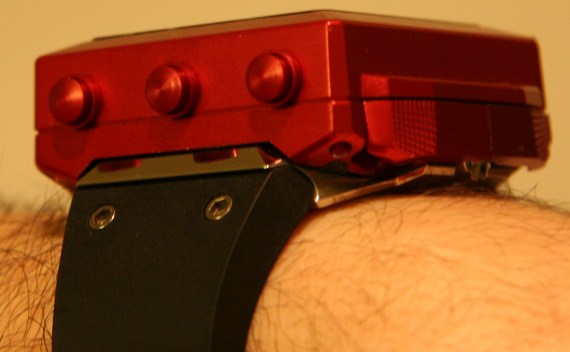 I’ll now list the major functions of the Land Instrument based on its sensors and computer. This in my opinion, is the best way of explaining what it can do:

Everything is displayed on the Land Instrument’s surprisingly sharp gray four-tone 128×128 pixel LCD screen. There is a backlight that can be activated during low light situations for a few seconds at a time. Linde Werdelin’s other Instrument, the Sea Instrument, features a color screen. I don’t really think that a color screen is necessary on a device such as this. To properly display different colors the backlight would need to be on too much and significantly reduce the battery life. A gray scale screen is just fine here, and accordingly, it has a good level of battery life with about 60 hours of standby time. This will give you a good day or two of usability, but it will need to be recharged. It is important to note that Land Instrument is not a watch per se, meaning that it is not made to be worn all the time like a watch. If you do, you’ll need to charge it pretty regularly (makes me think of the Microsoft SPOT watches). Right out of the box, the Land Instrument cannot be worn on your wrist by itself. However, a special wrist strap can be purchased separately from Linde Werdelin that you’d probably want to get if you don’t have a Biformeter watch. The Land Instrument also comes with a world charger. If you take your Land Instrument on adventures, it’ll be a good idea to bring along a solar charger or other types of charging equipment. 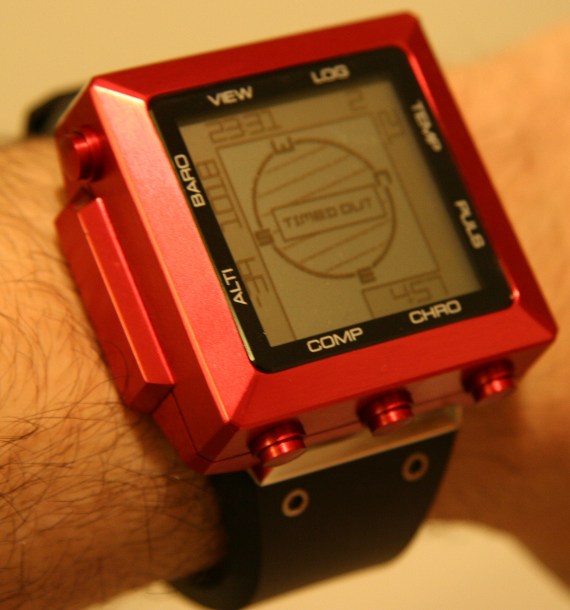 The Land Instrument is a nice feeling device, and is built to be light (41 grams) yet durable. The body is constructed from aircraft grade aluminum, with a mineral glass screen. While the device looks thick, most of the underside in concave allowing for it to fit on a Linde Werdelin Biformeter watch – making it pretty slim in reality. Size wise, it is about 44mm long, 52 mm wide, and 18mm tall at its highest point. Two little hinged clips on the side of the case allow for it to be clipped on to a Biformeter watch, charger, or the Land Instrument’s accessories that come with it or can be purchased from Linde Werdelin.

All this information is nice and dandy, but any device, no matter how much it does, isn’t worth your time if you cannot figure how to use it. Features need to be accessible, menu’s can’t be contrived, and I don’t want to have to carry around an instruction manual for basic operation. For the Land Instrument to receive my full praise, it would need to enjoy logical operation in addition to looking nice. So I put the Land Instrument to the “idiot test.” Evaluating how easy it was to use the device right out of the box, and seeing how much I could do with it in just a few minutes. This also involved handing the watch to the mechanically disinclined and asking them to play with it. In all, the Land Instrument fared really well. To accomplish my testing, I used the device myself and handed it to a few other people and asked them to perform a specific function with it. I’d say for example, “Use the device and tell me which direction is north,” or “what altitude are we at.” None of these requests ever took more than a few seconds, even from someone who never saw the device before. Further, when using the Land Instrument myself, I don’t recall even feeling inclined to look at the instructions to figure it out. I thought there might be a few advances features that I was not really thinking about, but nothing felt illogical or overly complex. It performed with a smooth grace that most anyone can figure out in just a few moments. No wide learning curve here, and “idiots” may apply. Allow me to go into a bit more detail, and feel free to use the images as a reference. 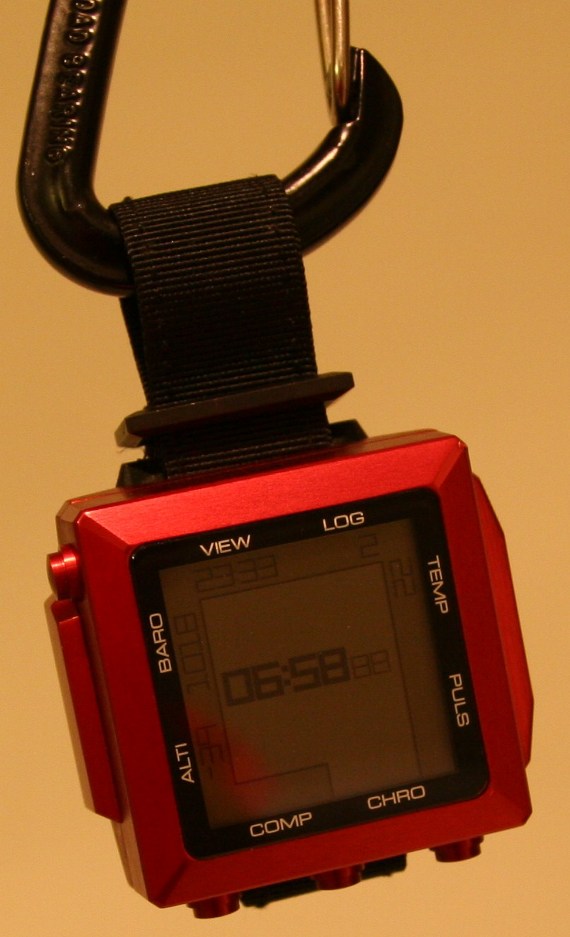 It is easy to tell when a company hires competent UI (user interface) designers. Linde Werdelin clearly did in this case, as the Land Instrument is actually pleasant just to play with. Mimicking the sound of machinery, a small speaker in the device sounds a satisfying “click” every time one of the four comfortable buttons are pressed. Around the screen are eight labels identifying various modes of function. They are pretty easy to figure out: “ALTI” obviously means altitude, and “PULS” obviously means pulse, the mode that measures your heart rate. Pretty simple right? The central part of the screen has a tab that moves around, connecting to the written labels. This gives you a very clear indication of what mode you are in, and you can cycle between the modes in a clockwise or counter-clockwise direction. This is done by the outside buttons on the lower part of the case. Also nice is the fact that labels show up on the screen telling you what the buttons do in any given mode. This takes most of the learning curve out of using the device making it really easy to use. Further, and of great importance, is that I didn’t notice any computer lag when using the Land Instrument. That means the processor isn’t being over burdened.

You’ll probably spend most of your time using the Land Instrument in “VIEW” mode. Here you see the time and date, but it also gives you handy information (that is customizable) like the barometric pressure, altitude, and operation of the stopwatch. A push of the center button on the bottom of the device brings up relatively easy to use menus for adjusting the settings of the watch. When you want to turn the Land Instrument off, you push the single button on the top left down for a few seconds, and you have the option of turning it off. Turning it back on is done in the same way. This all might seem esoteric, but if you are used to using multifunction devices that come in small packages, you know that too many of them are frustratingly complex with un labeled buttons and deep menus. Engineers are brought in to make something work, designers are brought in to make something look nice, and most of the time companies don’t take the extra step that Linde Werdelin did by focusing on design efforts to merely use the device. Thank you Linde Werdelin for considering that people will actually use the Land Instrument. I hope other companies will pay attention.

What is interesting is that all this effort was spent for what is arguably a niche device. The Land Instrument doesn’t really have any competitors that I know of. Sure there are some similar devices, but nothing quite like this.  Again, go back to the traditional European ideal of “no matter how small the market it must be perfect.” This philosophy pays off  and separates European manufactures from those in the rest of the world. The result in the Linde Werdelin Land Instrument clearly illustrating this concept. No piece of software is ever really done, and Linde Werdelin is proud of the fact that ongoing efforts are involved in upgrading the device. As the Land Instrument is user upgradeable, the company will likely ensure you are always up to date with the Land Instrument’s firmware.

More urban and nature adventurers should probably know about the Land Instrument. It is a pretty handy tool, and it doesn’t take up too much space. The Land Instrument is perfect for the occasional nature excursion or the serious world adventurist. Either with one of the Biformeter watches or with its own accessories, it offers a lot of functionality, reliability, and is more than a digital toy. It is a serious tool, it is an ‘instrument.’