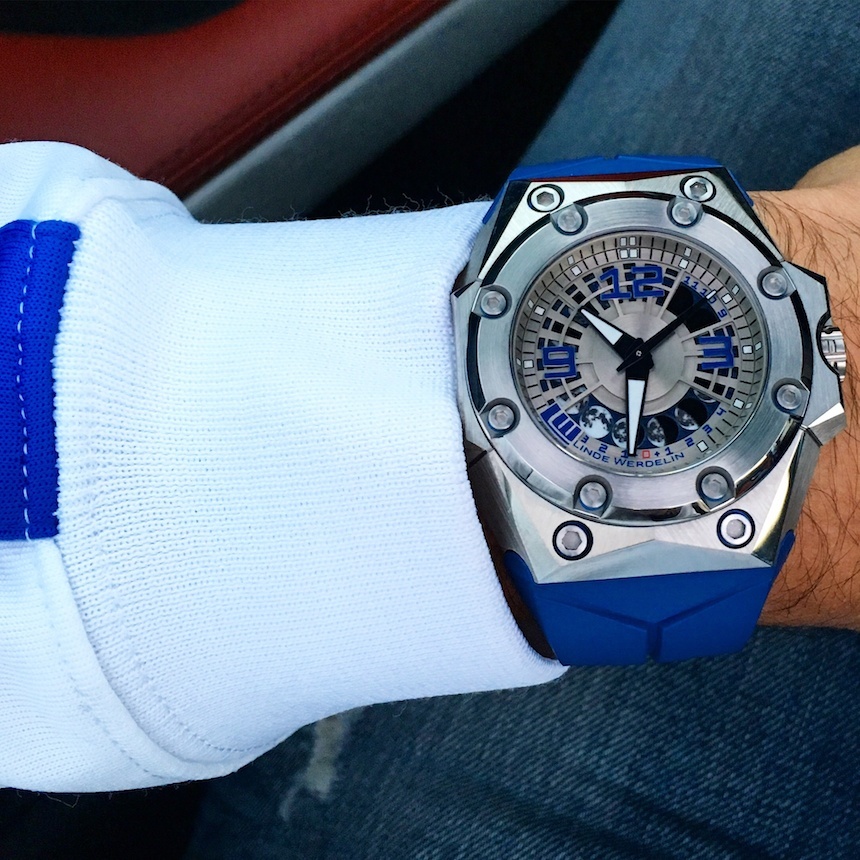 The Oktopus is Linde Werdelin‘s line of dive watches, and having had the pleasure of owning an yellow Oktopus II watch, I was pretty excited about reviewing their new Linde Werdelin Oktopus BluMoon. For some background, this independent Danish watch brand makes contemporary avant-garde sports watches, but also dabbles in much more. Besides experimenting with high tech modern materials such as forged carbon, Linde Werdelin produces high-tech digital instruments like the Reef instrument for diving and the Rock instrument for skiing, exemplifying the brand’s unique philosophy that the founders summarize as believing that analog is best way to read time and digital is the best way to read activity data.

I recently went on vacation in Miami, Florida, and was also thinking of spending a few days in Key Largo diving and hopefully completing the dives and mastering the skills necessary in order to get my PADI advanced scuba open water diving certification. In the first half of my review, I look at the Linde Werdelin Oktopus BluMoon as a day-to-day watch, especially how well it does in the watch-wearing and watch-knowledgeable world of South Beach, Miami, but also generally as a modern sports watch that offers something a little unique. The second half of my review will specifically focus on using the watch with the Linde Werdelin Reef instrument on my diving excursions. 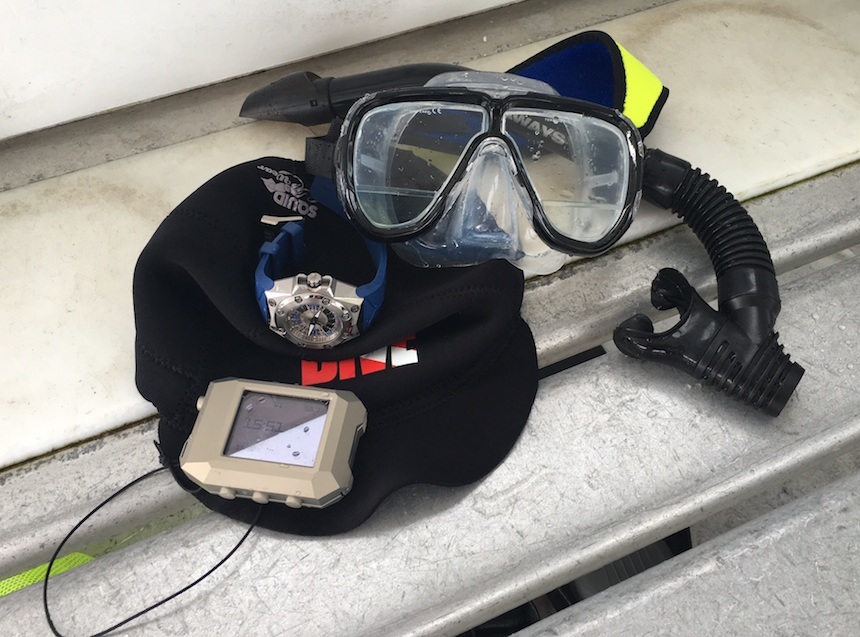 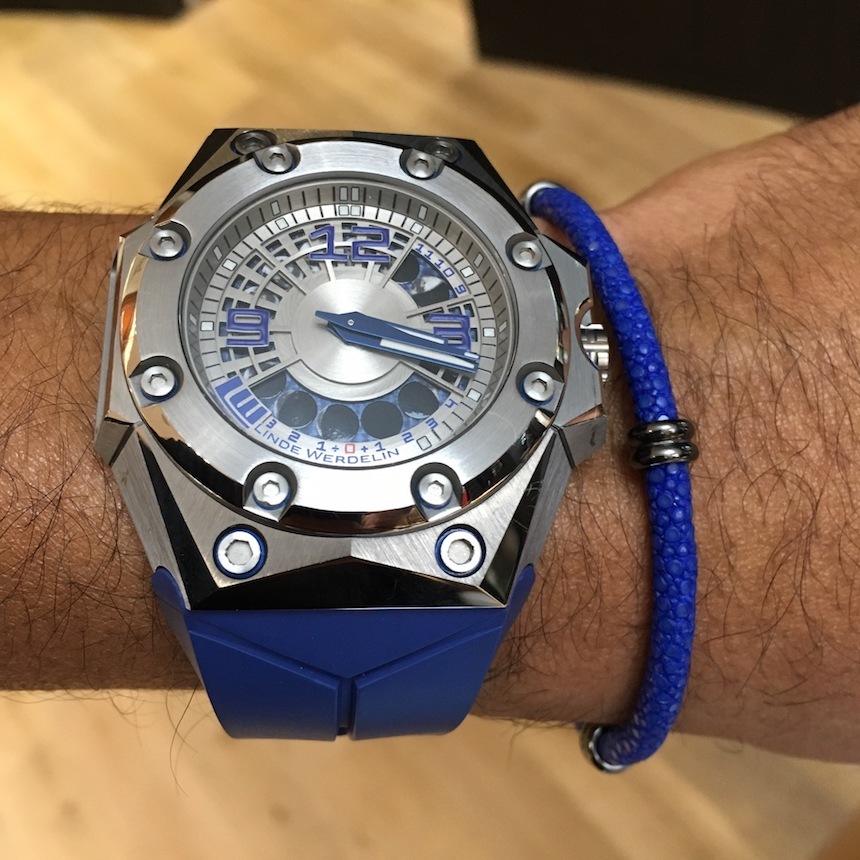 To start, I want to talk about the watch itself. Two things came to mind upon seeing the Linde Werdelin Oktopus BluMoon. First is that it keeps the same avant-garde design of the previous Oktopus, and second is the complex brushed, satin, and polished finishing on the case, which makes it stand apart from its other siblings in the Oktopus line. The combination of finishes is so pronounced and well done that the result is a watch that appears different from the other Oktopus versions. 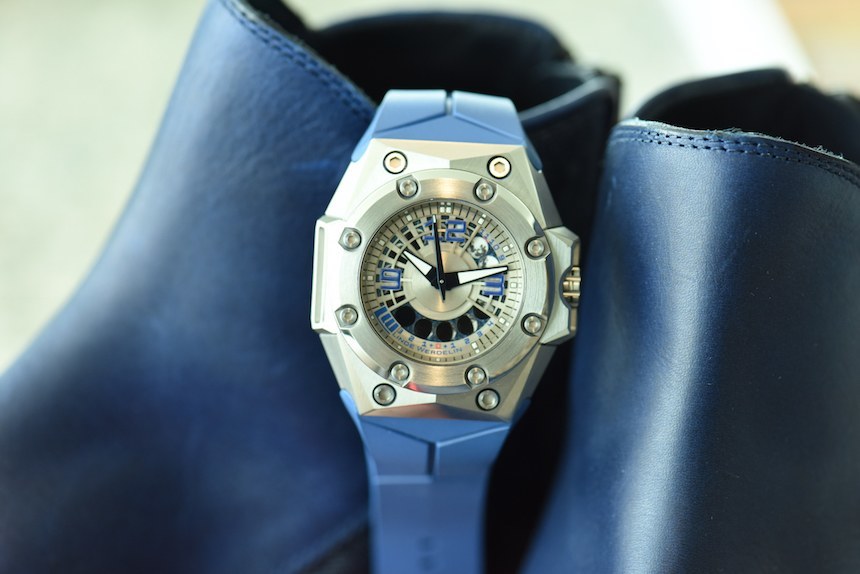 Under different lighting angles, you get alternate colors and reflections, making the watch stand out and infinitely pleasant to look at. The feel is reminiscent a bit of the Audemars Piguet Royal Oak which also uses this combination of brushed, satin, and polished finishing on its cases and bracelets to similar effect. One difference here, however, is that while APs are typically in steel, the Linde Werdelin Oktopus BluMoon is in grade 5 titanium, which is much harder to work with but results in a super light watch and is an important reason why it is such a wearable “big watch.” 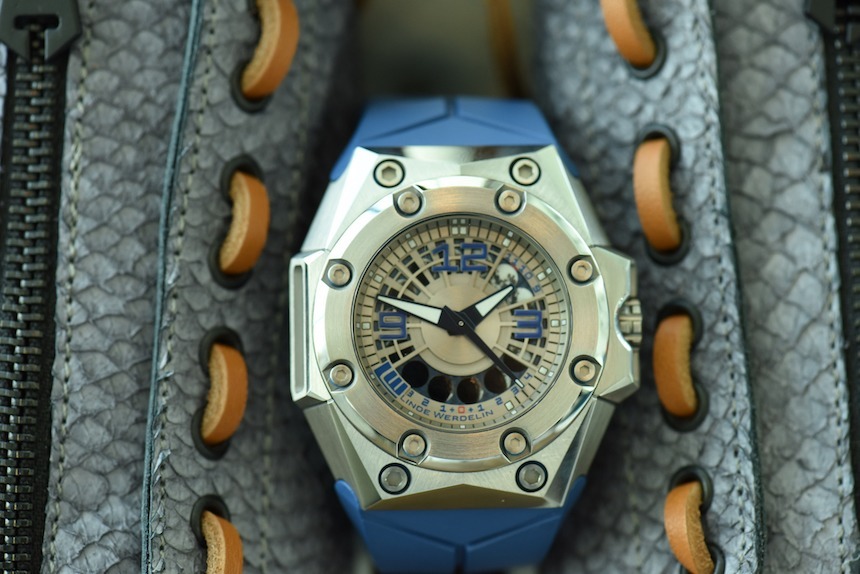 Another important aspect of the Linde Werdelin Oktopus BluMoon, similar to other Oktopus moon watches, is the unique Linde Werdelin fashion of displaying the phases of the moon. Adding an in-house complication to a Concepto-based three-hand-and-date movement, LW changed the date wheel into a rotating realistic moon wheel. Since the dial is skeletonized, there are well-placed openings between 2 and 3 o’clock and between 4 and 8 o’clock that allow one to read the current phase of the moon, where our celestial companion will be in 1, 2, 3, and 4 days, as well as where it has been. 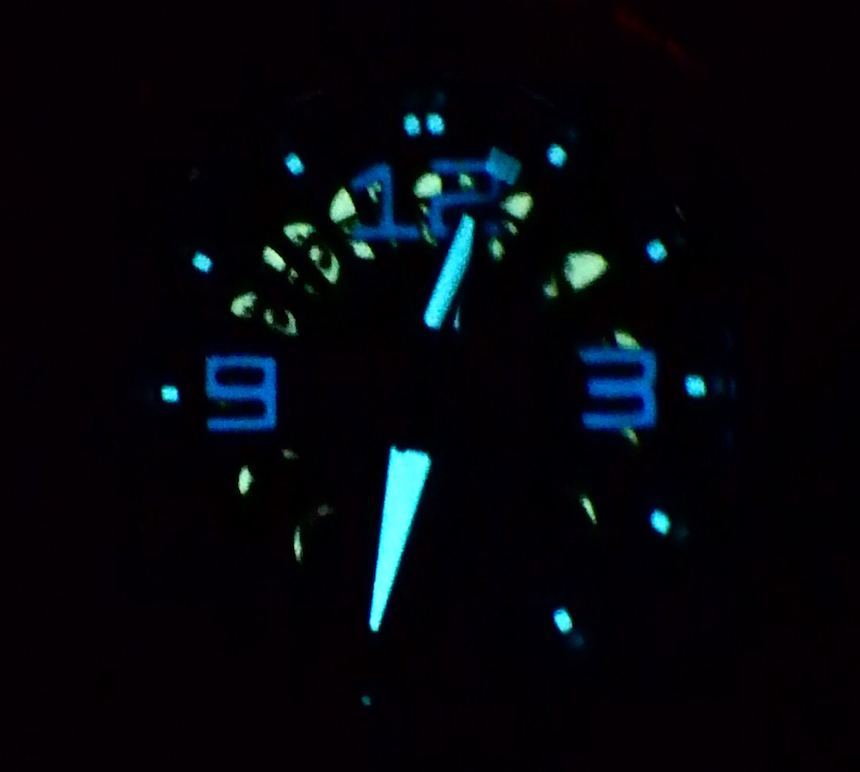 While it might appear at first to be a gimmick, knowing where the moon was and will be in a week is actually useful information for divers wanting to night dive. The moon is easily one of your best “friends” for nighttime activities like diving. Having a full moon while diving can mean being able to orient yourself to the boat by sight when night diving as opposed to having to solely rely on the use of other communications and navigation devices (e.g., a compass), not to mention the ability to quickly see other divers or your anchor buoy line and boat when surfacing. So, knowing when the moon is full or will be full is important information for planning these types of dives. The appropriately named Linde Werdelin Oktopus BluMoon gives you that information at a glance. It’s also made from realistic pictures of our celestial neighbor filled with lume that gives the dial a distinctive look in the dark. 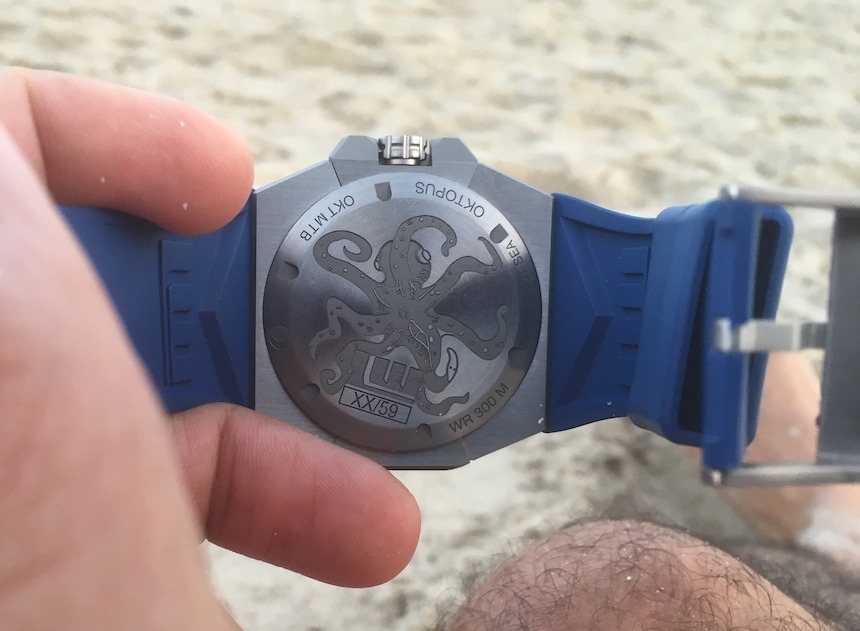 On the back of the Linde Werdelin Oktopus BluMoon, you will find, like in all other newer Linde Werdelin Oktopus watches, a striking carving of an Oktopus that is created by none other than LW co-founder and creative force Morten Linde. Like any modern dive watch, this one is water resistant to 300 meters and has a screw-down crown that is protected by the complex case design that forms a kind of carved open box where the crown sits. You can easily use your fingers to screw, unscrew, and (pulling the crown to position two) adjust the moon phase quickly – while position one will hack the seconds hand and let you adjust the hour and minute. At the zero position, you can also wind the watch, which I found to easily meet its 44 hours of power reserve, with an accuracy worthy of any modern chronometer. I really never had to adjust it after the first day of my three-week vacation using the watch daily. 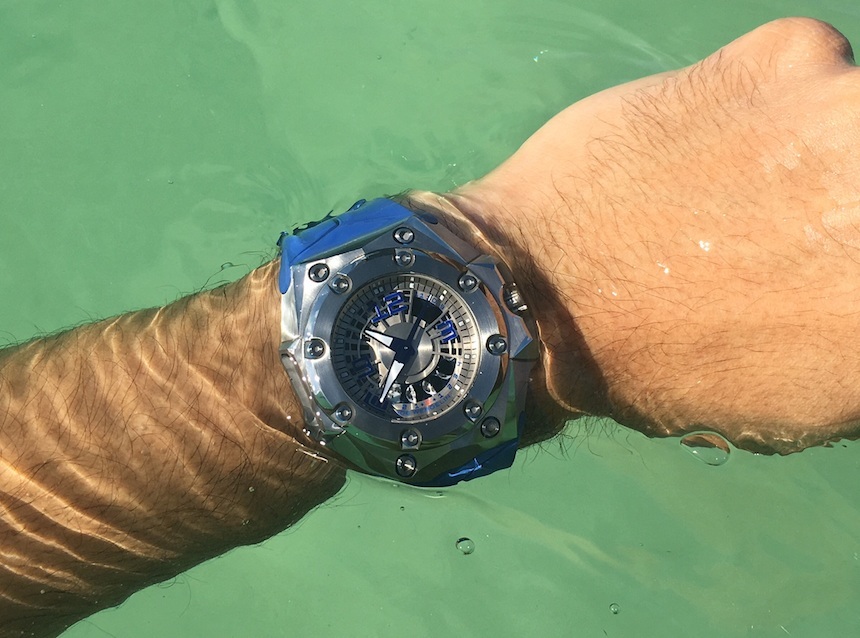 Like all the other Linde Werdelin Oktopus watches, this one is designed for diving. That would not be apparent from first glance since, while rugged, it does not have a rotating bezel. What? A dive watch without a rotating bezel? Yes, and that is because, as you will know if you are familiar with this brand, LW takes a different approach to sports watches than most. And for me, it’s one that actually works well. LW watches (all of them) have a complex case that is designed to be augmented with digital instruments, of which two are currently available: The Reef for diving, and The Rock for skiing. I got a chance to use this Linde Werdelin Oktopus BluMoon with the Linde Werdelin Reef for various dives in Key Largo, and I will recount my experiences with that in the second half on this review. 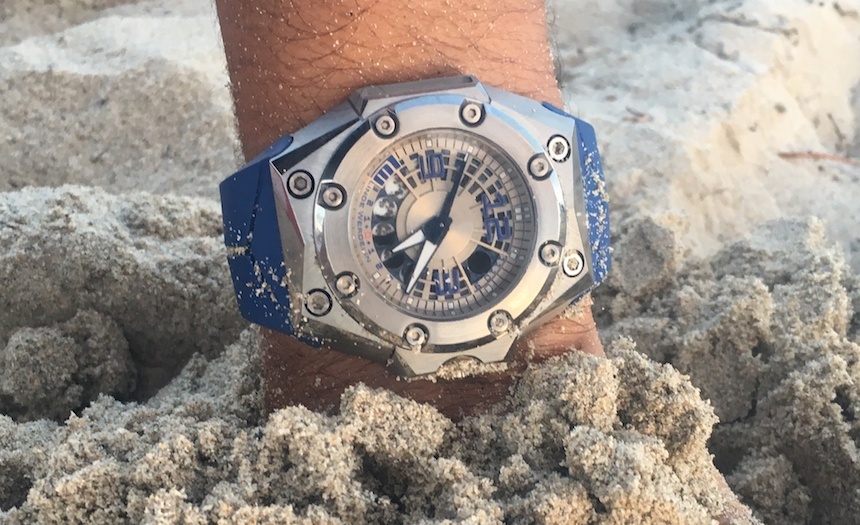 For now, let’s only focus on the Linde Werdelin Oktopus BluMoon, as it is also worthy of a daily sports watch that I found worked brilliantly for my Miami/South Beach vacation. First off, while the watch is relatively big at 15mm high, 44mm wide, and 46mm lug-to-lug, it actually wears really well – similar to how the Linde Werdelin SpidoLite Tech works so well on the wrist, even though it is a large watch. Part of the reason here is the integrated lugs and the well-made, supple, natural blue rubber band that the Linde Werdelin Oktopus BluMoon ships with. 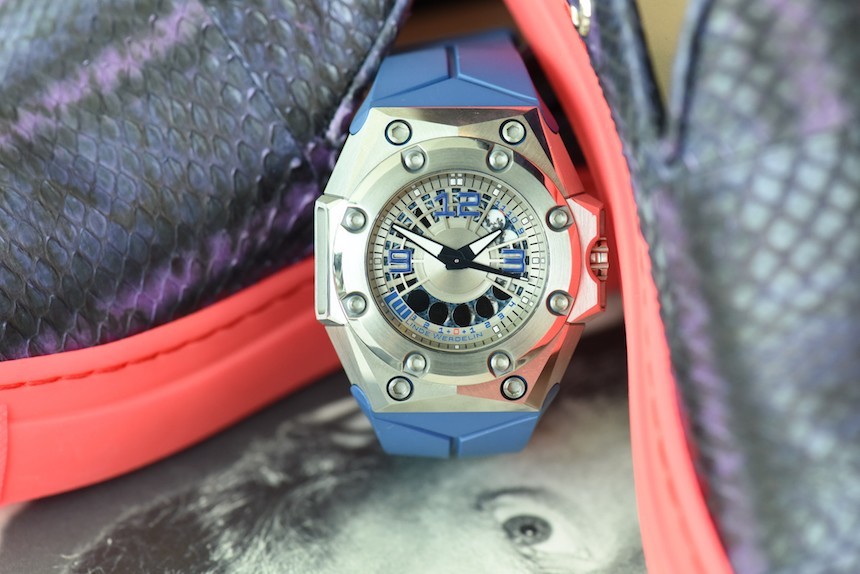 I never felt any pain nor any discomfort wearing it. This is completely opposite of the other watch I typically take along with me during vacations, my trusty Rolex GMT Master II (reviewed here). Don’t get me wrong, the GMT is great and a completely different watch, but the steel-and-gold band, while first class, leaves little room for adjustments. And after a few hours during a long flight, I typically have an urge to remove it and free my wrist. That was never the case with the Linde Werdelin Oktopus BluMoon, which is a considerably larger watch in pretty much all dimensions. 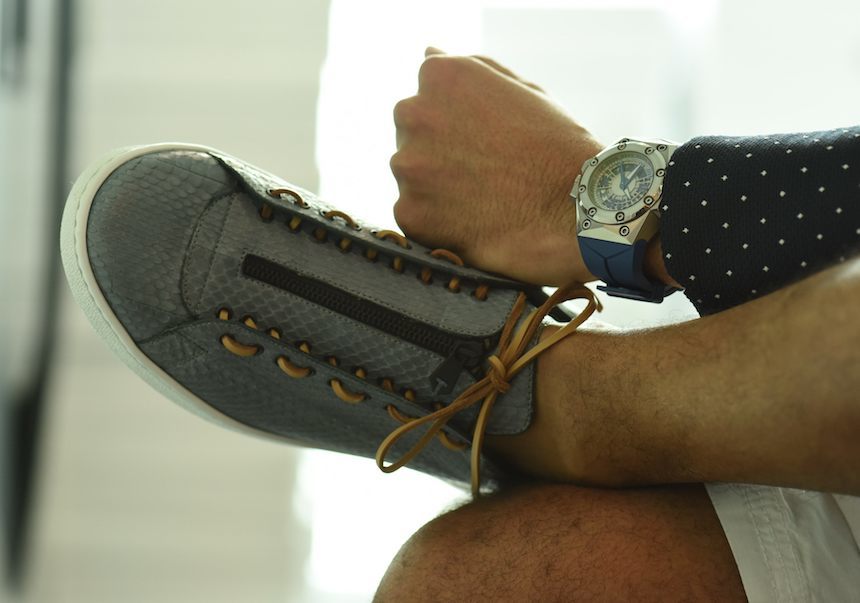 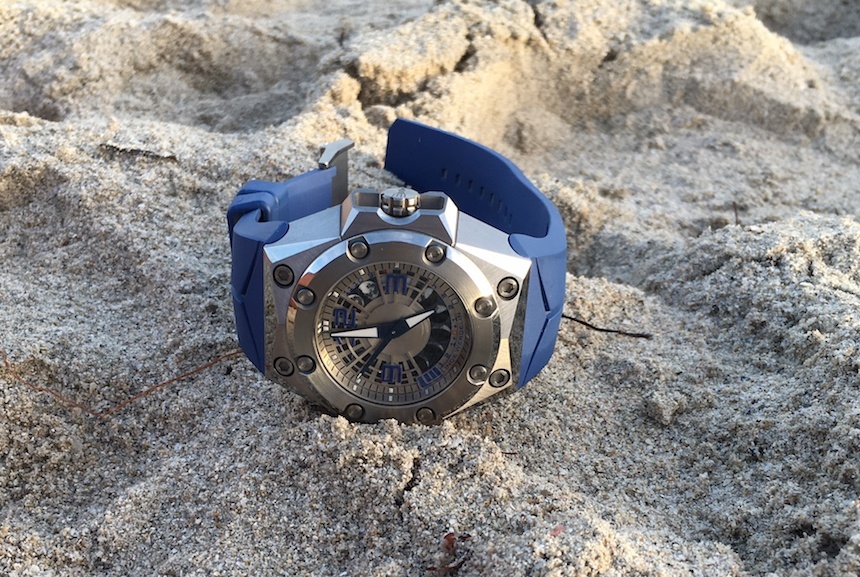 With the Linde Werdelin rubber strap, I also never really had any issues in cool, humid, and the super-hot weather of South Florida over Christmas. That also included various trips to the beach where I wore it non-stop in the ocean, sitting at the beach, at the restaurant, at parties, and so on. Just the perfect South Beach watch – or for any vacation location, for that matter. Plus, that brilliantly unique case design made it stand apart from the other beach goers and South Floridians. So, now that I’ve got my thoughts on the watch covered, let’s look at the Linde Werdelin Reef computer.