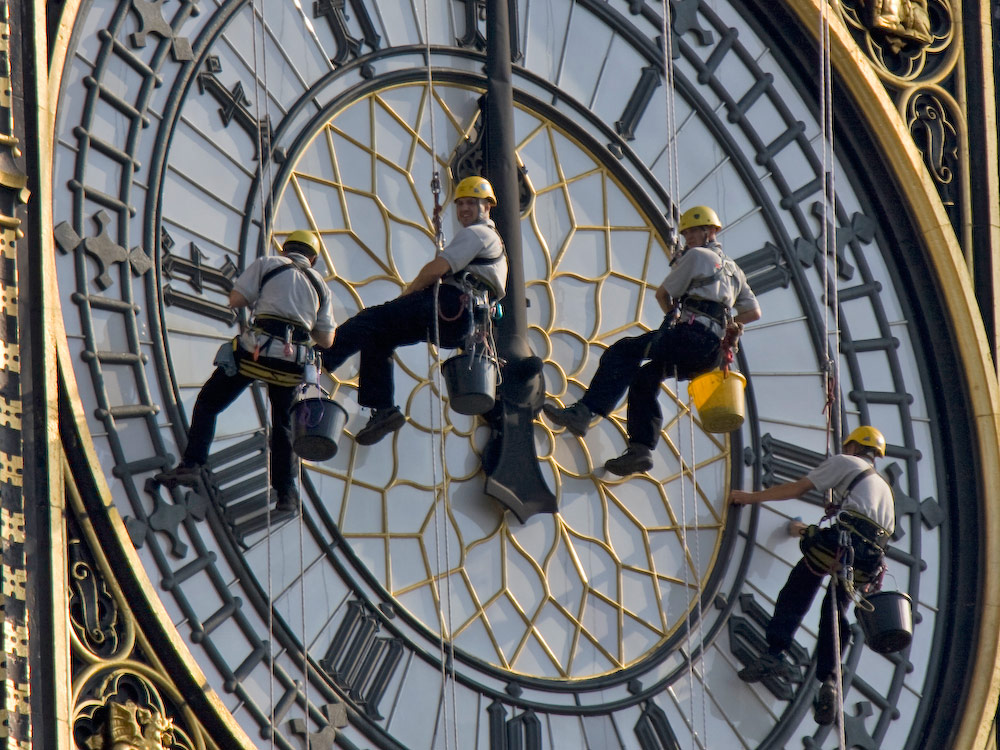 Plans to silence the bells of London’s iconic Big Ben for four years during renovation have caused some recent controversy in the UK. Beginning at noon on Monday, August 21, 2017, the bells will be mostly out of commission until 2021 for “essential repairs,” according to the BBC. Aside from affecting one of the most recognizable landmarks in the world, the news pinged our horological radar. So we’ll take this opportunity bring you the story – but mostly as an excuse for a quick look at Big Ben itself from a horological perspective. Ready to get nerdy?

All images used are public domain, labeled for reuse, or credited.

“Big Ben” is actually the nickname for the Great Bell that sounds the hours, but that name often also extends to the Great Clock and Elizabeth Tower itself. In the center of London, Elizabeth Tower stands 96m tall at the north end of the Palace of Westminster, where the UK’s two houses of the Parliament meet. So, as a national and cultural symbol, as well as a symbol of government, almost anything involving it is bound to raise some emotions for locals. Aside from some minor as well as notable interruptions over its long history, Big Ben’s bells have been ringing and its clock has been displaying remarkably accurate time for 157 years.

Big Ben is a great example of the many beautiful clocks that can be found around London from the rich history of British clockmaking. Watch lovers might wonder why there aren’t more watchmakers, especially in today’s “British watchmaking revival,” that use the many cool and interesting historical clock designs available. Big Ben’s style of Roman numerals, for example, is something that has not made it onto many modern watches but could indeed be very cool (note the use of the Roman numeral IV instead of IIII that is more common on watch dials). Dent, the namesake company of the clockmaker who built Big Ben, does make a watch specifically in the style style of Big Ben, but there is still so much more history to draw upon. Dent Parliament watch beside to the actual dial of Big Ben.

At 334 stairs up the tower, Big Ben’s clockwork sits in a large frame with an inscription near its base: “This clock was made in the year of our Lord 1854 by Frederick Dent, of the Strand and Royal Exchange, clockmaker to the Queen, from the design of Edmund Beckett Denison Q.C.” More precisely, it was designed by Edmund Beckett Denison and George Airy, and constructed by Edward John Dent. Edward Dent died in 1853, and his stepson Edmund finished the clock in 1854, but it did not go into use until May 31, 1859, when the tower’s construction was completed.

With dials on each of the four faces of the tower, each is 7m (23ft) in diameter and made of cast iron with 312 pieces of opal glass for nighttime illumination, some of which have the ability to be removed for inspecting the hands. The hour hand alone is 2.7m (9ft), and the minute hand is 4.3m (14ft) long. Just think of the massive power and clockwork it must require to move four sets of those hands, not to mention the five bells. Many clock towers such as Big Ben – if they are not electric today – employ some form of pendulum clock. The invention of the pendulum clock by Christiaan Huygens – who also invented the balance spring watch – some centuries before, in the 1600s, helped the accuracy of clocks go from about 15 minutes per day to about 15 seconds per day. From there, successive developments saw steady improvements in timekeeping accuracy. See more about the development and role of clock towers in Europe in our article on Swiss watchmaking culture here.

In the time between 1854 when the clock was complete and the 1859 completion of the tower itself, Denisen is said to have invented (there are conflicting claims to its invention) the double three-legged gravity escapement (more on Wikipedia here) it uses today to improve upon the original design (that used a deadbeat escapement and remontoire). This pendulum escapement design isolated the pendulum from being affected by other forces, such as pressure on the hands, that would be fed back through the movement and transferred to impact the pendulum’s amplitude. At the time it was built, the Great Clock was said to be “biggest, most accurate four-faced striking and chiming clock in the world,” according to Westminster clockmaker Ian Westworth who helps keep the clock consistently accurate to within two seconds. We talk a lot on aBlogtoWatch about the different factors that can affect the durability and accuracy of wristwatches, but stationary clocks naturally present their own set of challenges – especially giant tower clocks. Things like a flock of birds perching on the minute hand or accumulated snow have been known affect Big Ben’s accuracy.