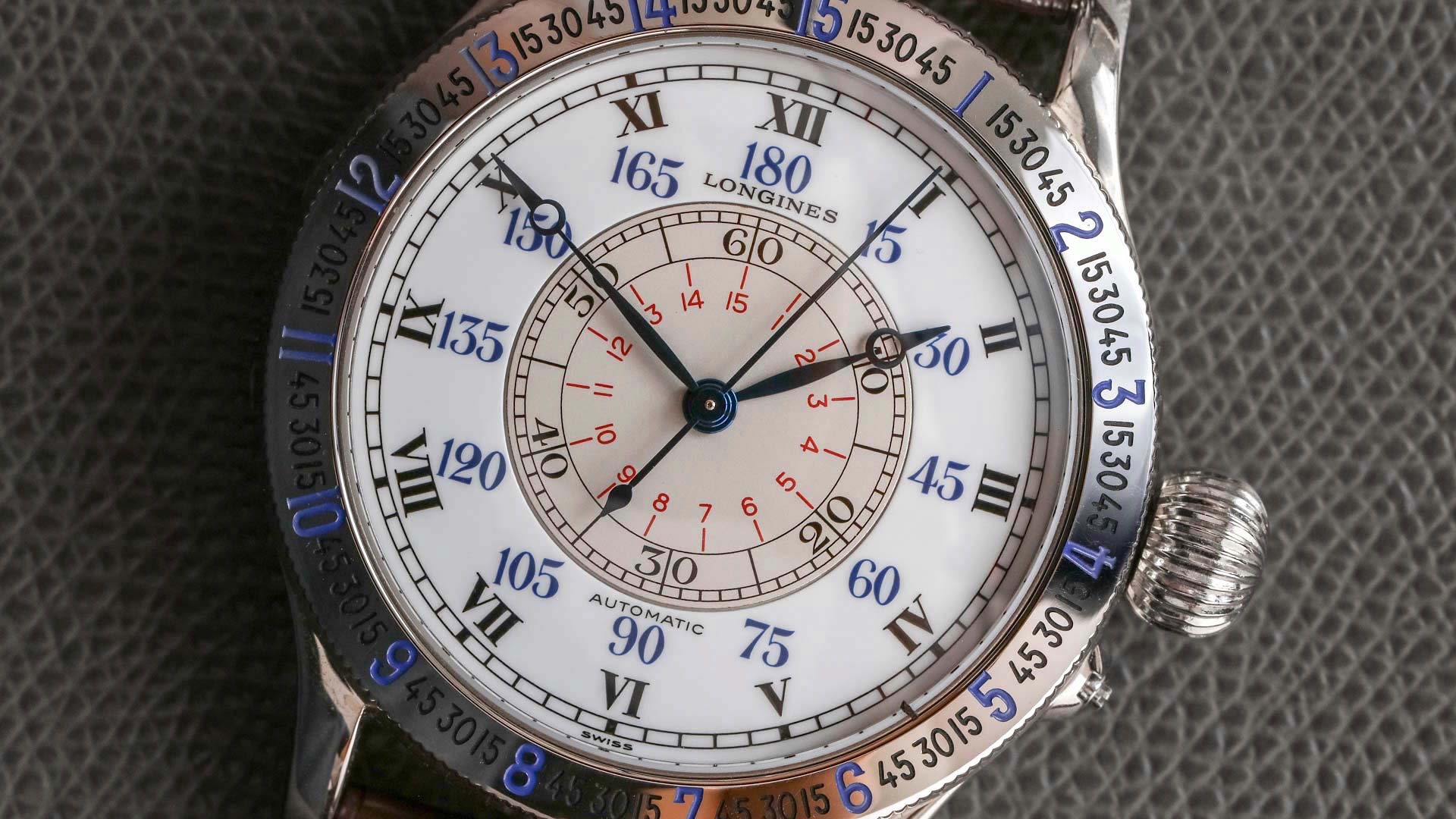 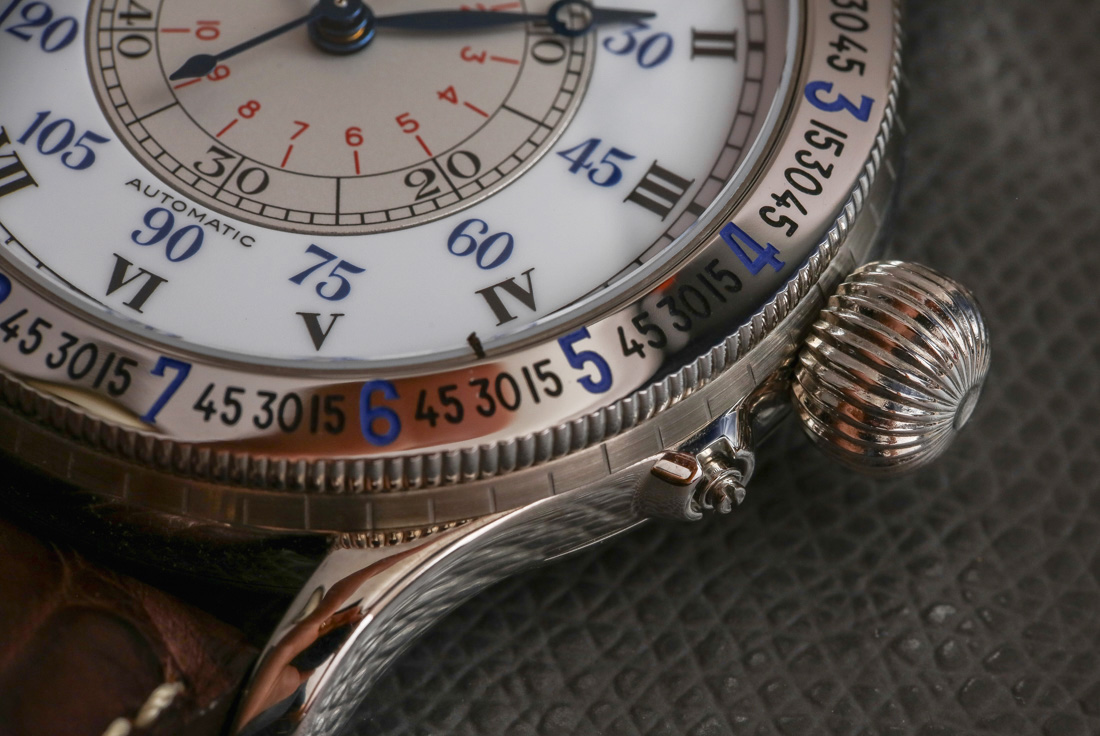 Case architecture is interesting, full of nice details. One of the best is the brushed lower bezel that has indicator cuts on it. This is to help with the Hour Angle system while the watch is off. You’ll never use this feature, but it is a cool visual detail for sure. Water-resistant to 30m, the case differs from the original also in that the rotation of the inner disc is controlled by the crown (when pulled out to the first position) as opposed to having a secondary crown. I don’t mind this at all, the system works pretty well. The large, onion-style crown is comfortable to grip, and attractive looking. 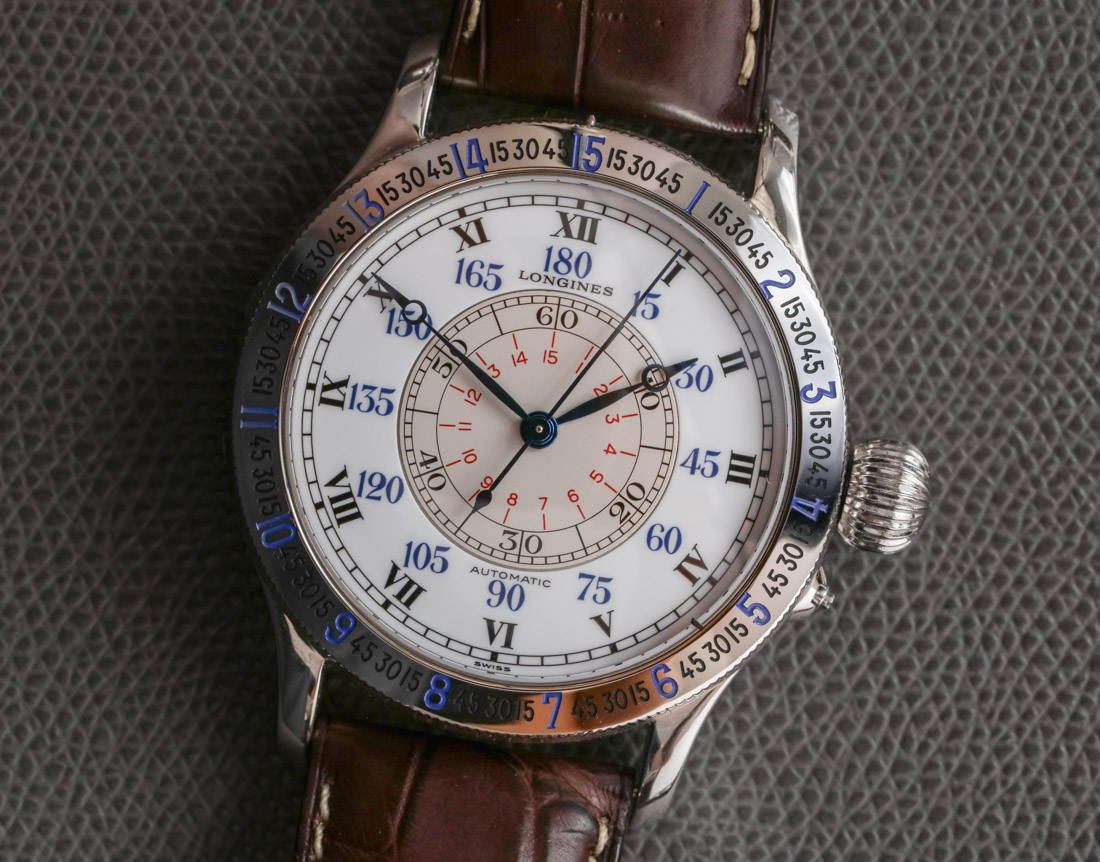 The freely bidirectional rotating bezel has a small metal notch at the “12 o’clock” position, whose purpose I don’t fully understand. My only thought is that it helps you orient where the “top” of the bezel is in situations where visibility is limited. Unless you are actually using the watch to calculate your navigational position, the rotating bezel doesn’t seem to have much of a secondary use. Alternatively, the inner rotating disc is something that has more practical use. Also freely moving, it has a 60 minute track as well a 15 segment track. I don’t understand all of its historic purpose, but it was apparently used to synchronized the seconds hand with radio signals. Today this feature can be used similarly to a rotating diver’s bezel to measure an independent 60 minute segment of time. 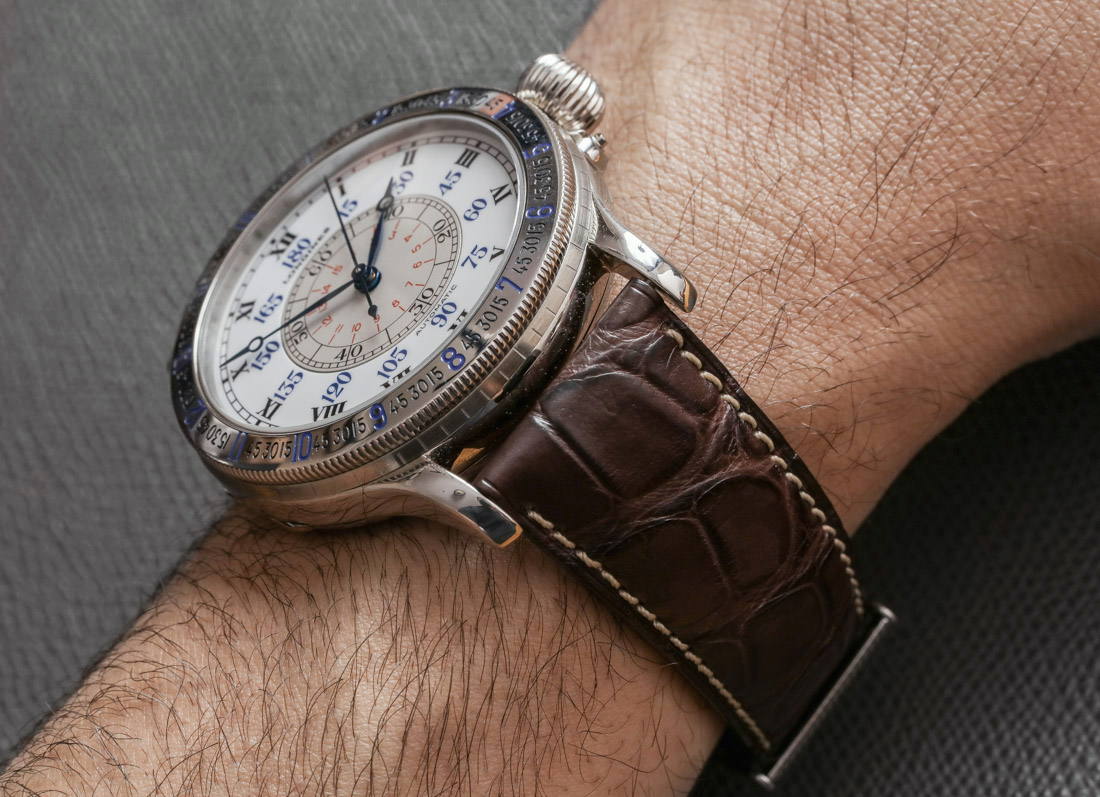 Longines apparently recognizes that this disc has modern appeal, and uses it in the Weems collection watches, which as I said used the same case and movement as the Lindbergh, but without all the Hour Angle stuff. So what of the Hour Angle system and how does it work? I’m not an expert and despite doing some research I haven’t found anything which easily explains it – though the idea is simple enough. In essence the system relies on the fact that if you know the position of the sun at noon, you can interpret where you are longitudinally on the globe given the fact that the sun appears to move around the earth (from our perspective that is) one full time each 24 hours. That movement arc is separated into 15 segments, which can be further subdivided to help give you an even more precise location. 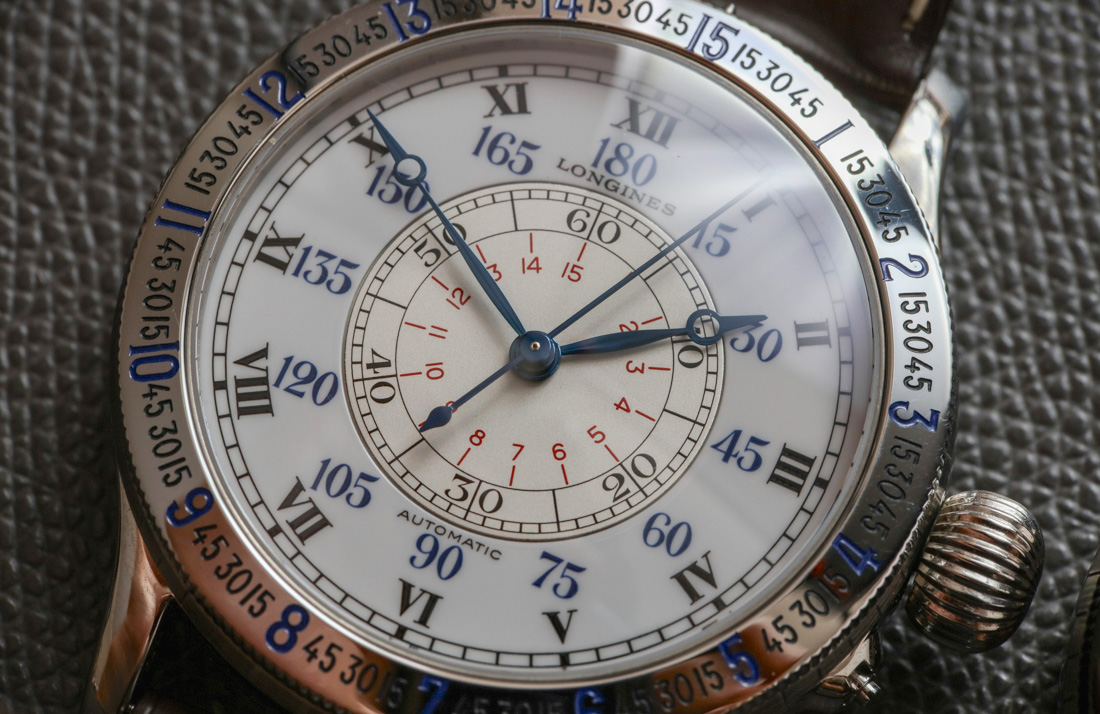 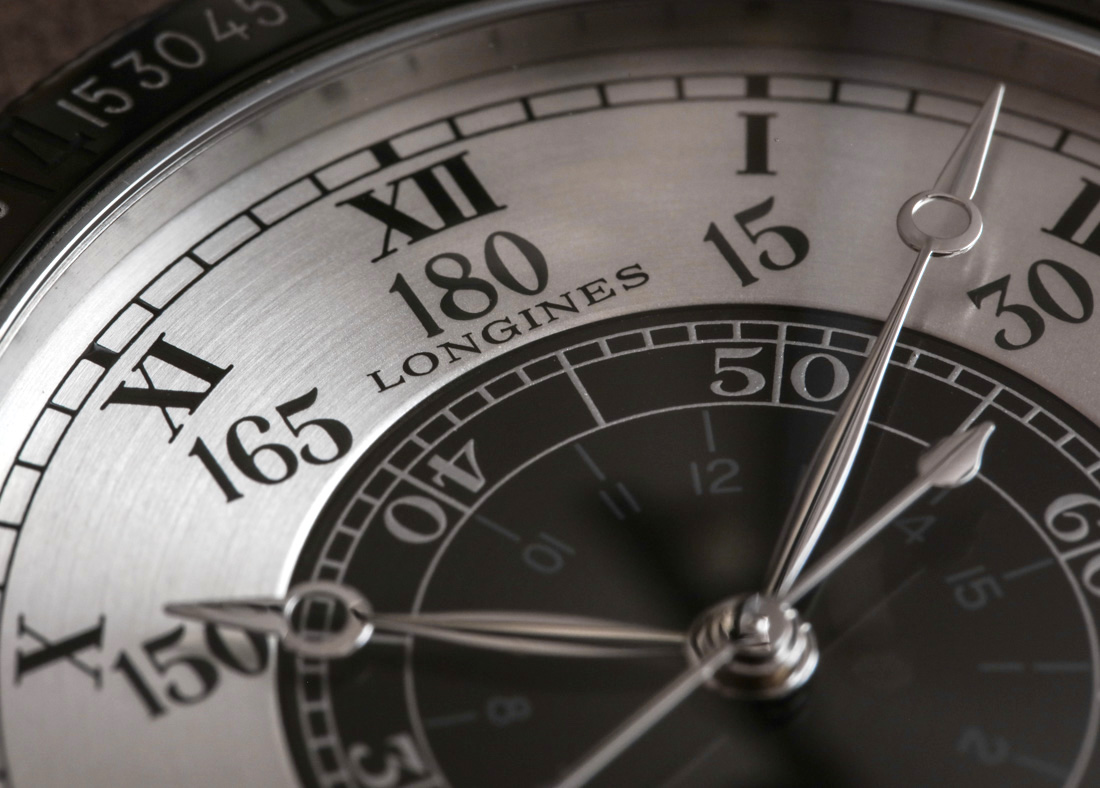 When using the Hour Angle system you need to make sure it is noon, and then you need to line up the watch with the sun, look at the position of the hour hand, and then perform a mathematical calculation. When done correctly you could relatively precisely know at least one dimension of where you are located on the earth. If you do not know exactly when it is noon, or if you cannot see the sun, then you cannot perform the calculation. The concept was adapted from one of the ways a sextant device works, by Mr. Lindbergh as I understand it.

Whether or not you understand how to use the Hour Angle system isn’t really important to appreciating the watch. I don’t think I’ll ever do the calculation, nor do I think anyone who is an actual pilot outside of doing it to establish some inner level of nerd credibility. I put all of this in the same category as rotating slide rule bezels on watches; i.e. they look cool but no one will ever use them. 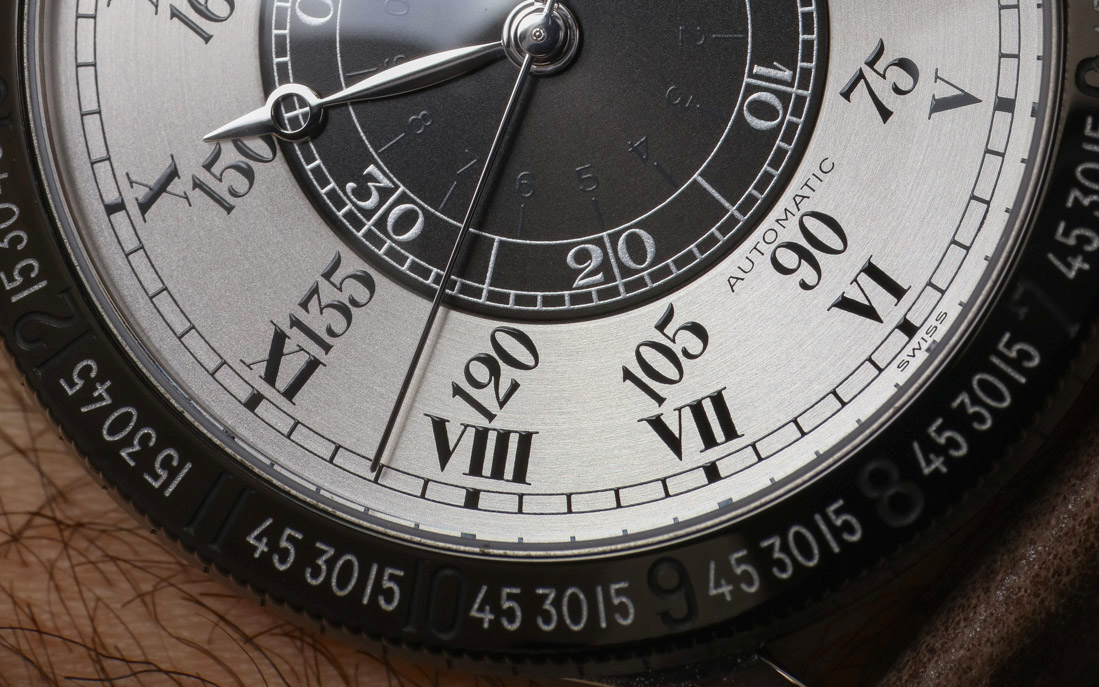 The Longines Lindbergh dial is full of markers and indicators related to angles, degrees, etc… If you like how it looks, then I think the watch will satisfy you. If you prefer a more simple look, Longines produces essentially the same watch, sans the rotating bezel, with a cleaner dial that has Arabic or Roman hour numerals. With that said, I still think the Lindbergh version is the most desirable because the proportions work the best (for example, the relative length of the hour and minute hands to the hour markers). 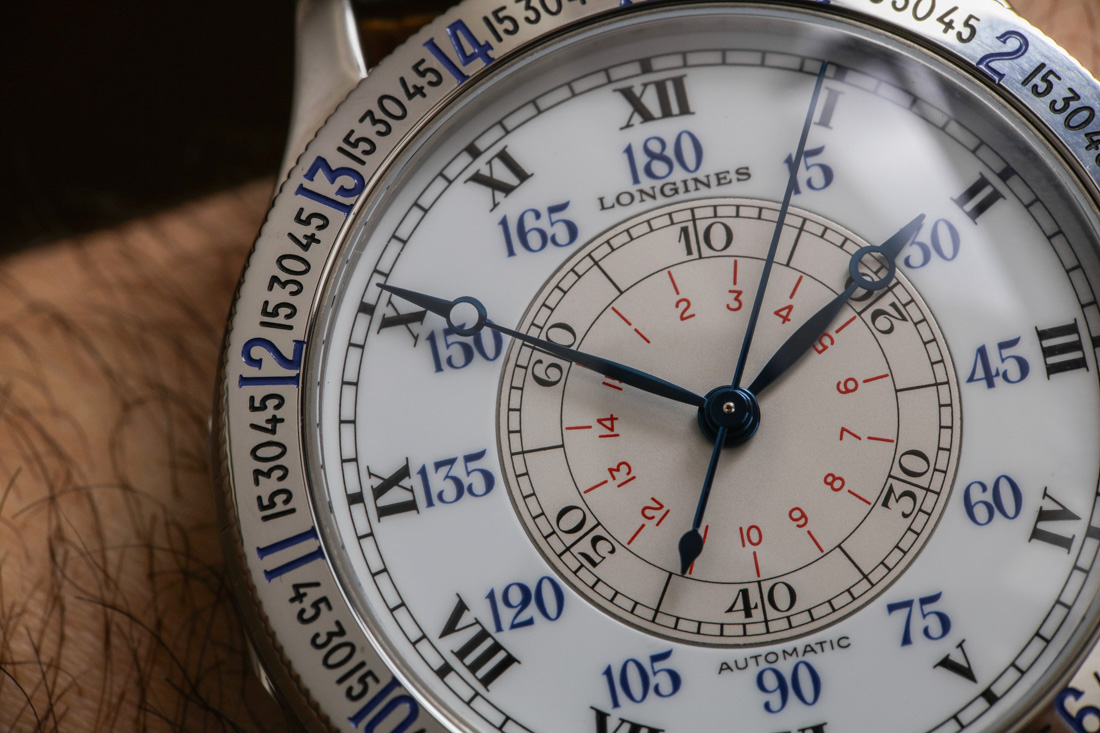 The white dial of the standard version is lacquer, and done pretty nicely. I really like the blued steel hands that look like flame blued ones. I am not sure if they are actually flame-blued or color treated, but Longines seemed to make sure these pomme-style hands look as good as possible in their blue color. The biggest problem with the 90th anniversary limited edition is that the hands are polished steel, and make for sub-optimal legibility. Longines wanted to make a more contemporary version of the Lindbergh with the 90th anniversary model, and it does have a good look to it. Though it really needed different hands in my opinion. The shiny, polished hands, mixed with the glossy surface of the brushed silvery dial simply makes for a less than ideal readability scenario. More so, certain visual elements (such as some of the markers on the inner rotating disc) on the 90th anniversary model are difficult to read for similar contrast-related issues. 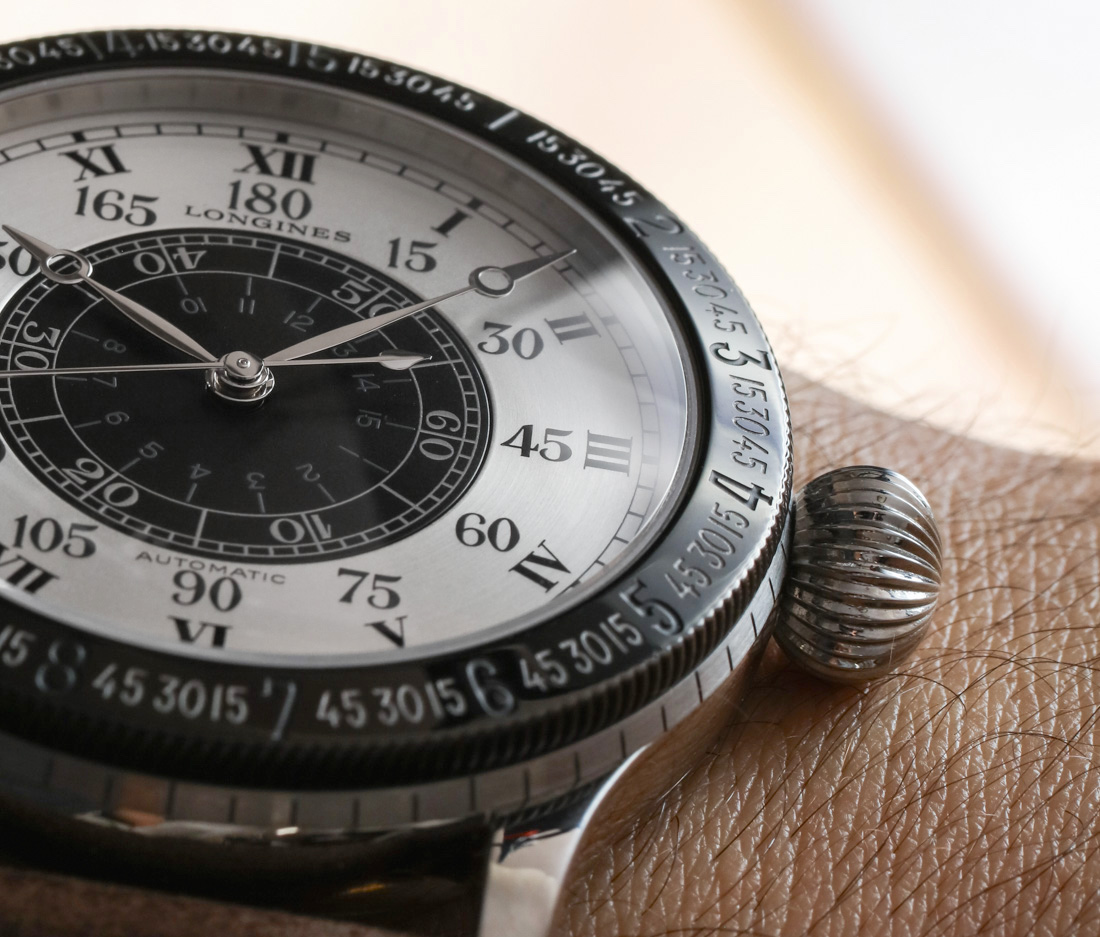 Longines uses a steel rotating bezel for both versions, with the bezel on the 90th anniversary model being in PVD-coated black. Also, the 90th anniversary model case is mostly titanium, while the stock model is in steel. There are some weight savings for the titanium, but as I hold each of the two watches in my hands, they more or less feel the same. In all, if I was to choose between the two models, I would go with the “truer to original” white-dialed version given its looks, legibility, opening caseback, and excellent details. The lack of the open caseback of any kind on the limited edition really takes away from a full appreciation of the watch because the movement is such a highlight of the design. 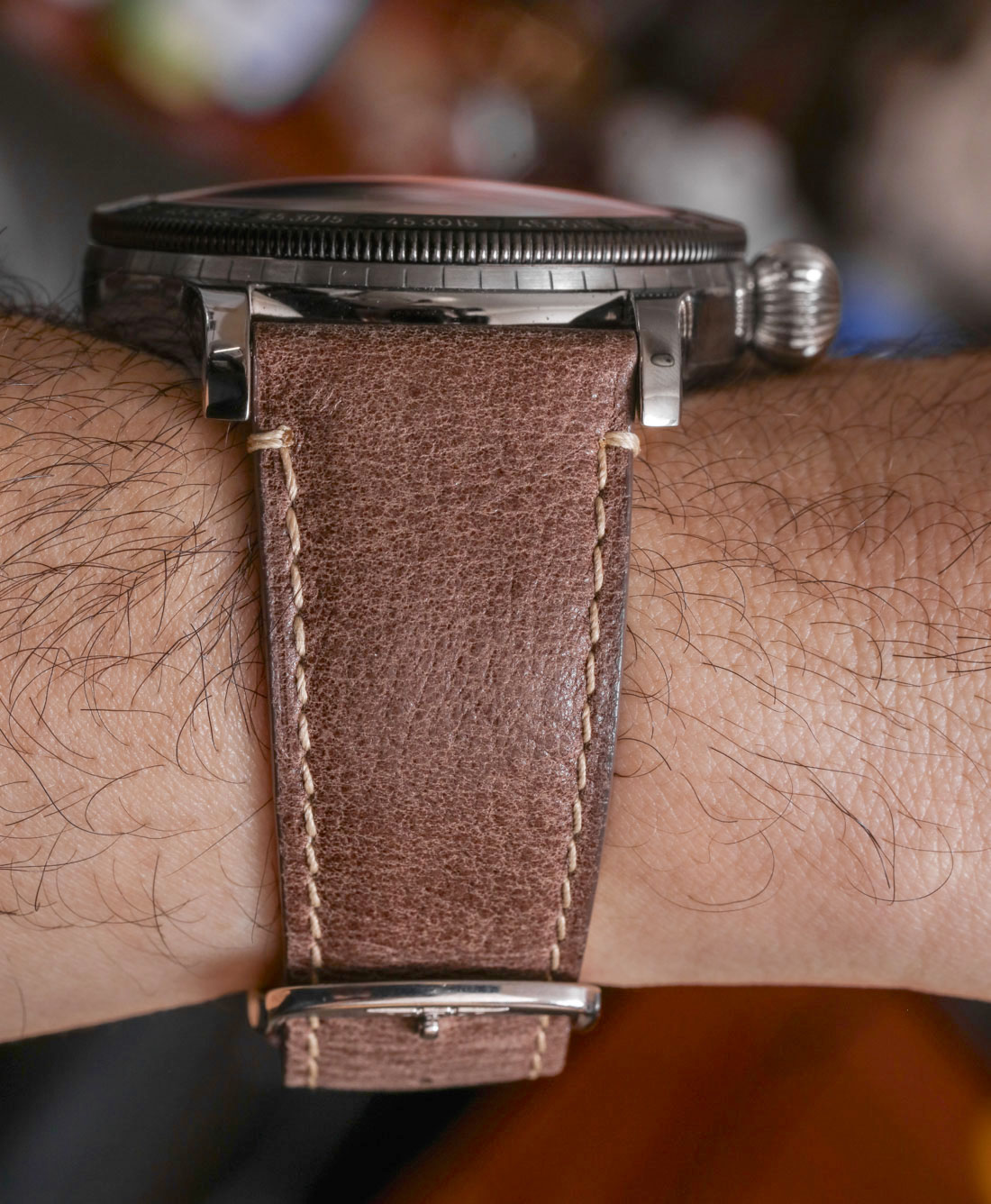 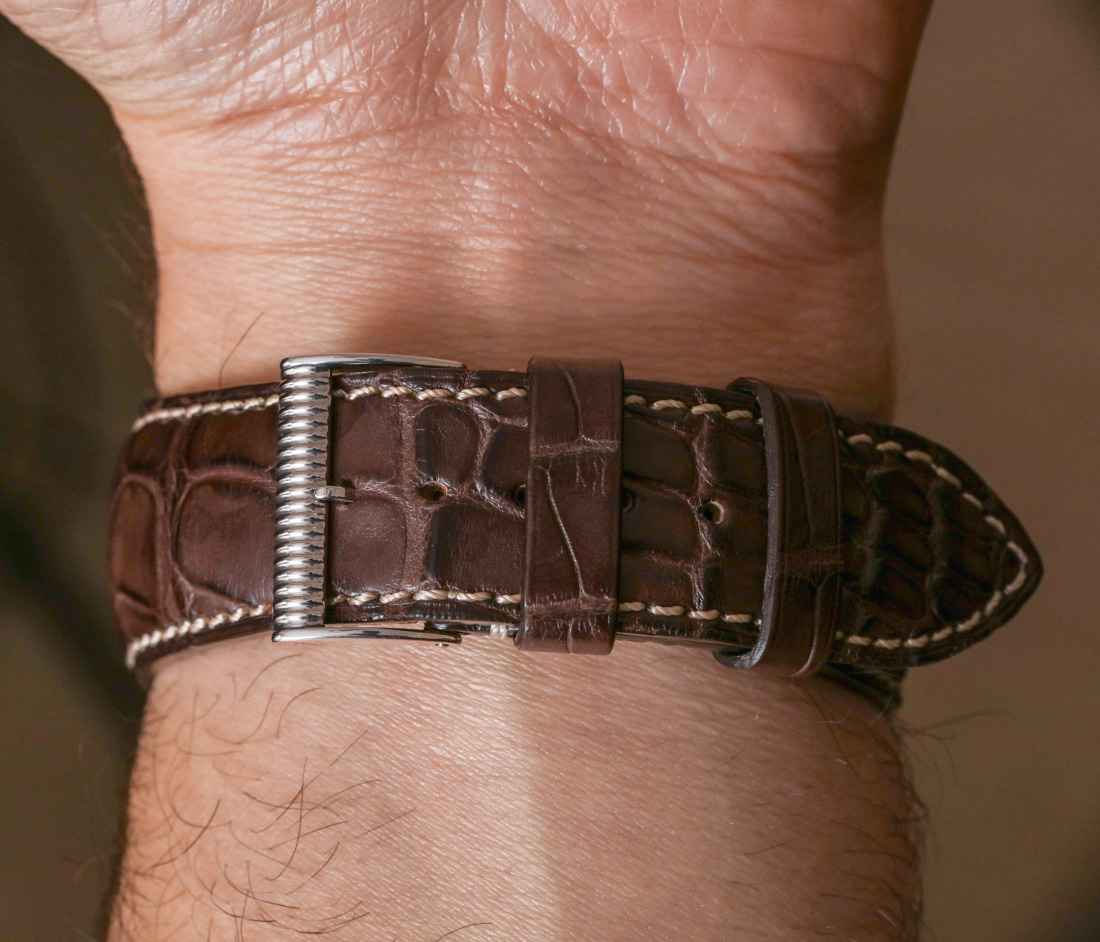 Longines offers a real alligator strap for the Lindbergh, which thankfully tapers a bit. The 90th anniversary model comes on a really nice bomber jacket-style brown leather strap, along with a small strap extension if you are going to wear it over an aviator suit (which you are not going to do). I did find that on my sub-7 inch circumference wrists, the alligator strap was too long. I am not sure if Longines offers a shorter version of the strap. Oh, and in case you are wondering, the “EF Co” written on the back of the watch doesn’t have anything to do with flight or Lindbergh, but is a historic marker on Longines watches dedicated to the brand founder Ernest Francillon. 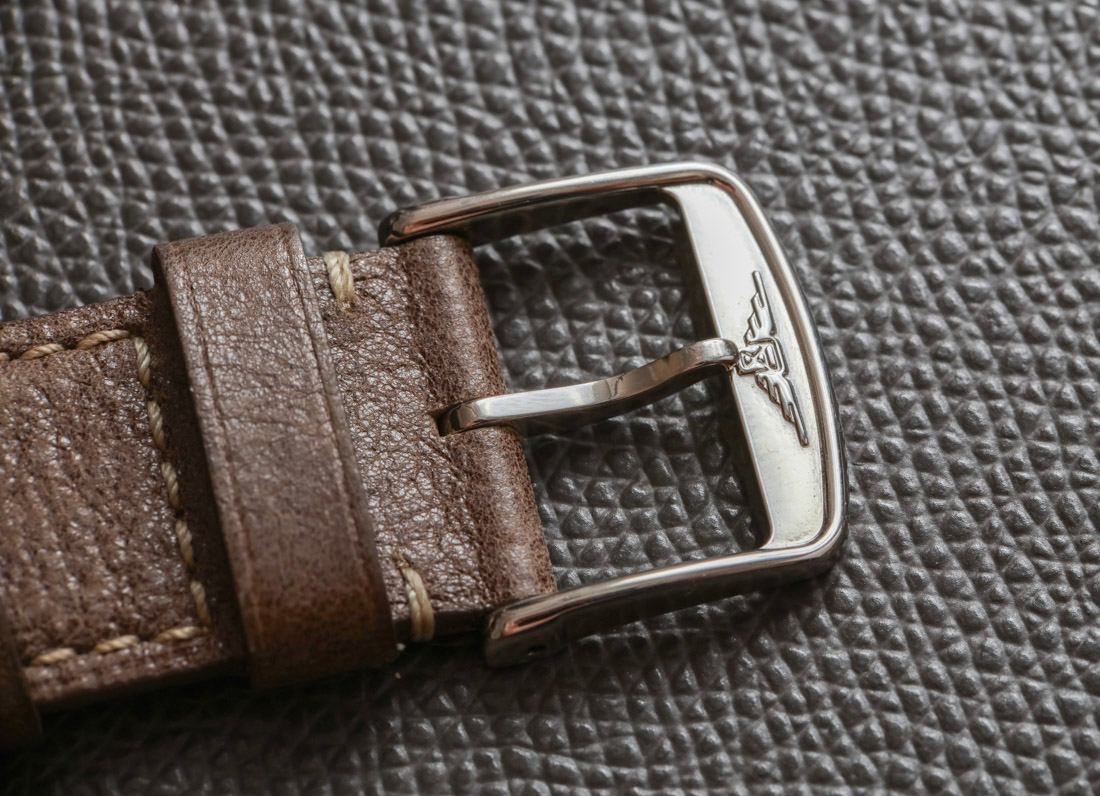 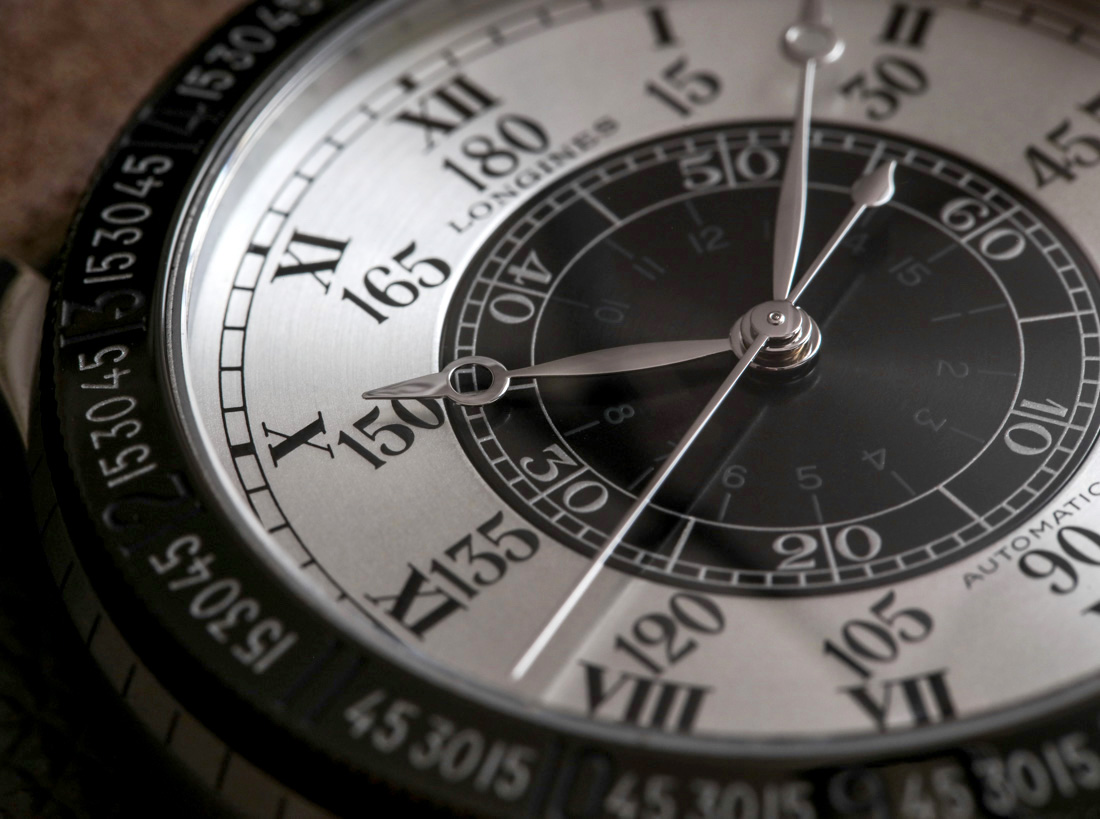 Even though the Longines Lindbergh isn’t a newly released neo-vintage model, it is one that many people easily overlook. What sells it for me is that the core aesthetic of the watch remains relevant today. The easy to read dial is effective and pleasant on the eyes. The multitude of colors and indicators on the dial evoke a sense of intrigue, asking yourself “what was the world like when people needed to use this to know where they were?” Features in the watch such as the movement decoration, opening caseback, and overall good quality and construction make this a real collector’s-style watch, or even suitable for daily wear. The Charles Lindbergh connection and story really help seal the deal, offering that emotional connection necessary for us to spend a few thousand dollars on pretty much any item. 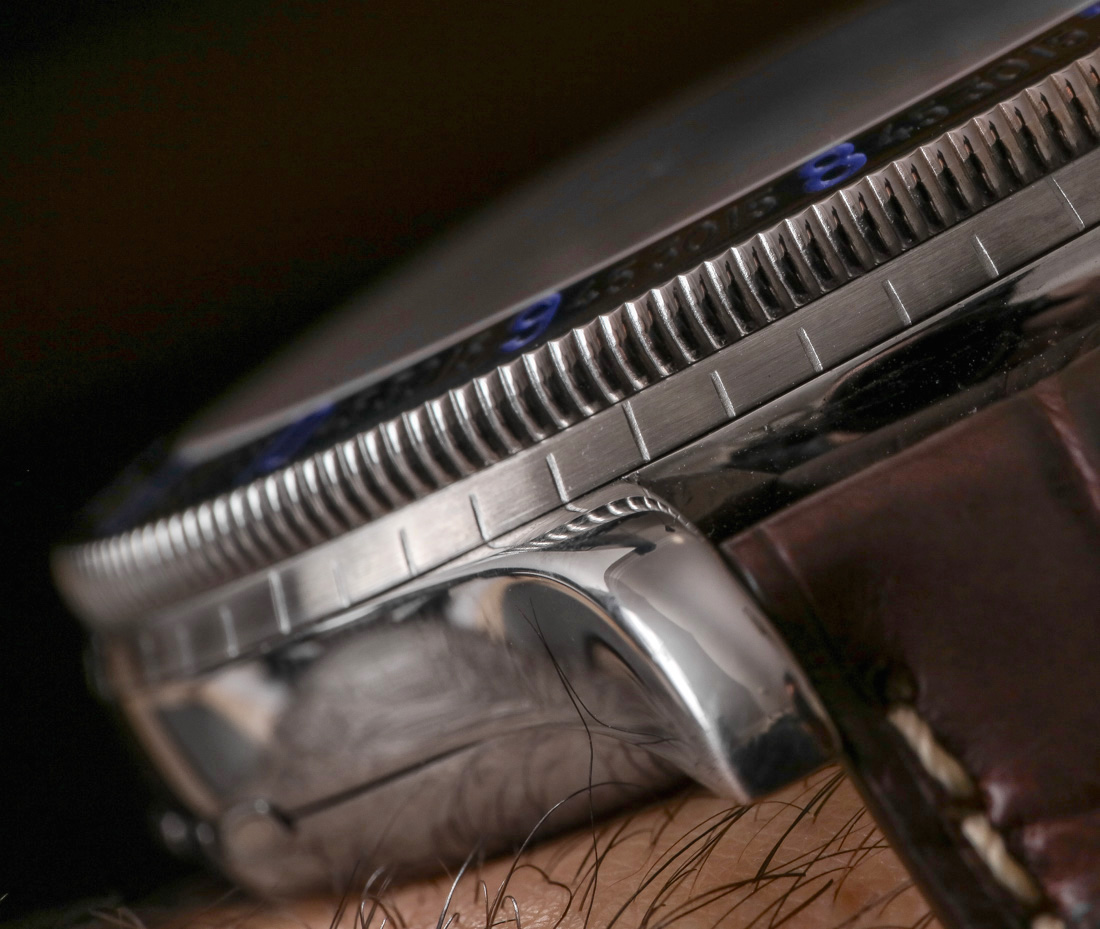 Placed within the larger Heritage collection, I encourage you not to overlook the Longines Lindbergh 47MM Automatic if you are in the market for a vintage-style pilot watch. For the money you get a decent value, and it further encompasses a lot of the values you should be looking for in a Longines timepiece. Price for the reference L26784110 Longines Lindbergh 47MM Automatic “Hour Angle” watch is $5,000 USD, with the price of the limited edition reference L26781710 being about the same. longines.com

Necessary Data
>Brand: Longines
>Model: Lindbergh 47MM Automatic
>Price: $5,000 USD
>Size: 47.5mm wide, by about 17mm thick
>When reviewer would personally wear it: At an event with a lot of pilots who might recognize it (or tell me how to use it).
>Friend we’d recommend it to first: Fan of historic tool and aviator watches who wants something modern with some fun gimmicks attached to it.
>Best characteristic of watch: Well-made and attractive rendering of a historical great. Movement presentation is excellent, and Longines deserves respect for being able to effectively meld the old and the new in a watch with real emotional and utilitarian appeal. Feels like a good value from a price perspective.
>Worst characteristic of watch: 47.5mm wide size is going to limit potential wearers. Longines arguably doesn’t explain or market the watch as much as might be expected.