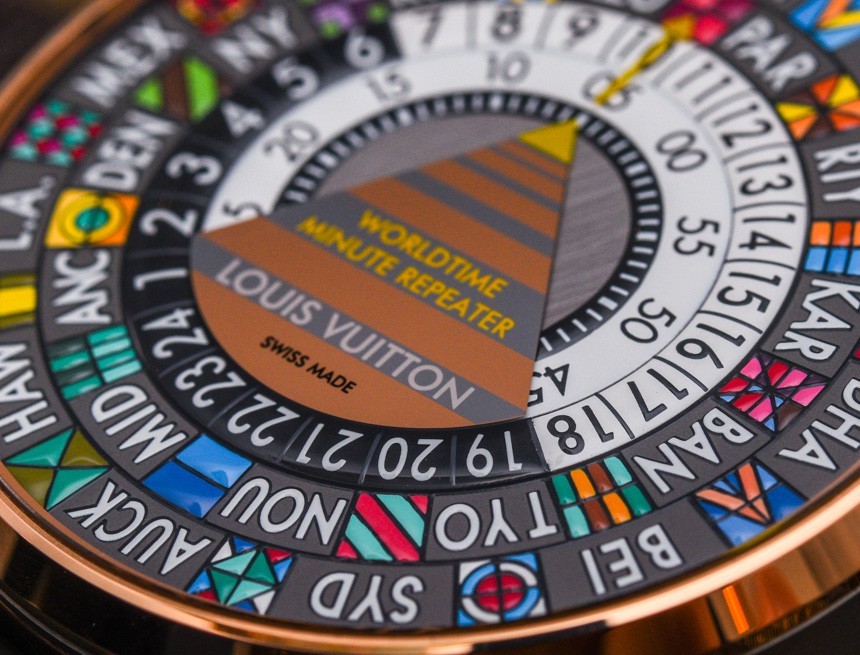 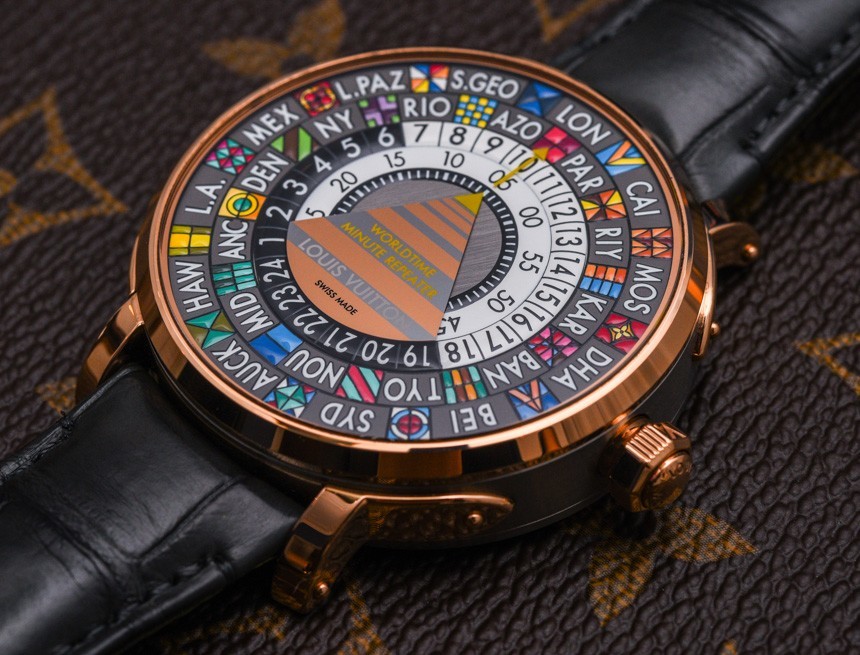 The luxury group LVMH, or Moët Hennessy Louis Vuitton SE, is packed full of quality brands with a long watchmaking heritage. Despite providing one half of the acronym under which esteemed horological houses such as Zenith, TAG Heuer, and Hublot ply their trade, Louis Vuitton watches don’t often get the focus they might deserve. It’s easy to dismiss their wares as nothing more than brand-name billboards, but that is certainly not the case with the Louis Vuitton Escale Minute Repeater Worldtime watch. Here we have a piece that is as visually dazzling as one could expect from a fashion label, but far more technically advanced than we might have anticipated. 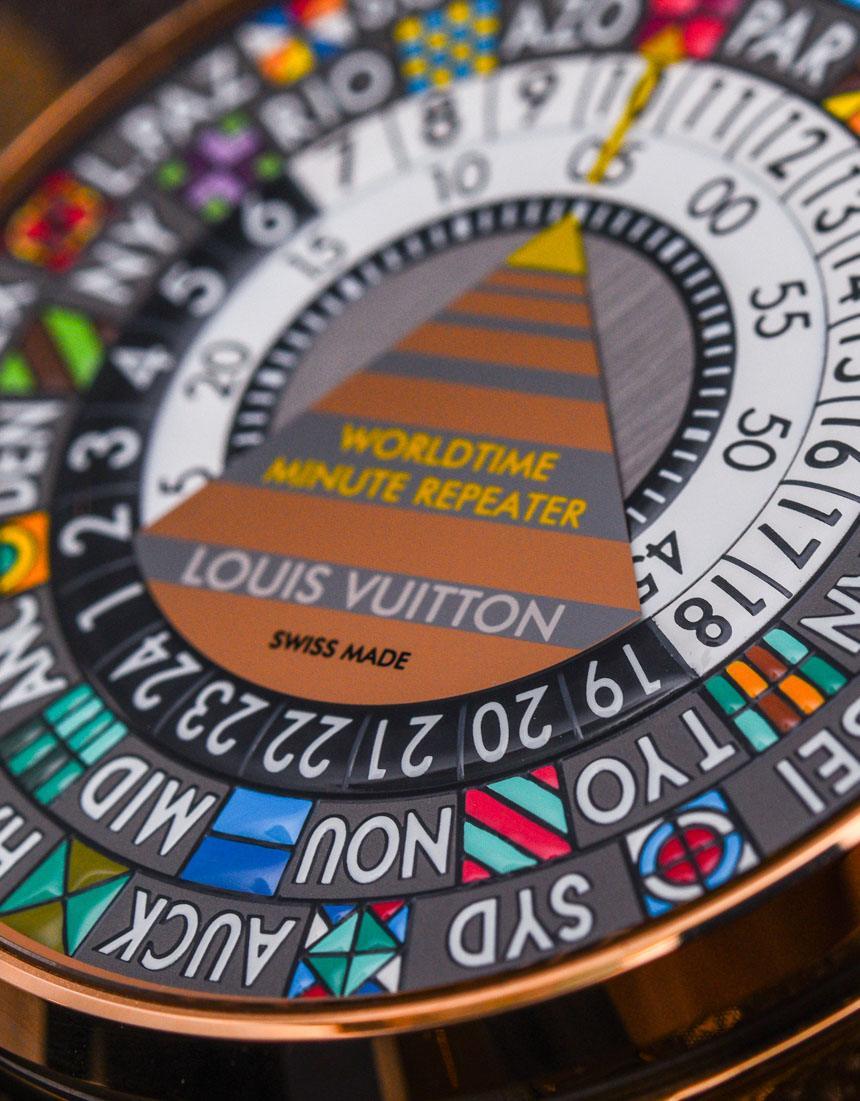 Before I delve into the movement, which is a quality calibre, I’ve got to talk about that fantastic dial. It would be remiss of me not to point out the obvious – this looks like it’s been excavated from the catacombs of Egypt, with the central pyramid design, the dusty, desert-inspired palette, and the hand painted “flags” that encircle the dial. The keen-eyed among you will notice that the designs that decorate the worldtime ring are not in fact flags, nor do they have much to do with the locale they demarcate. 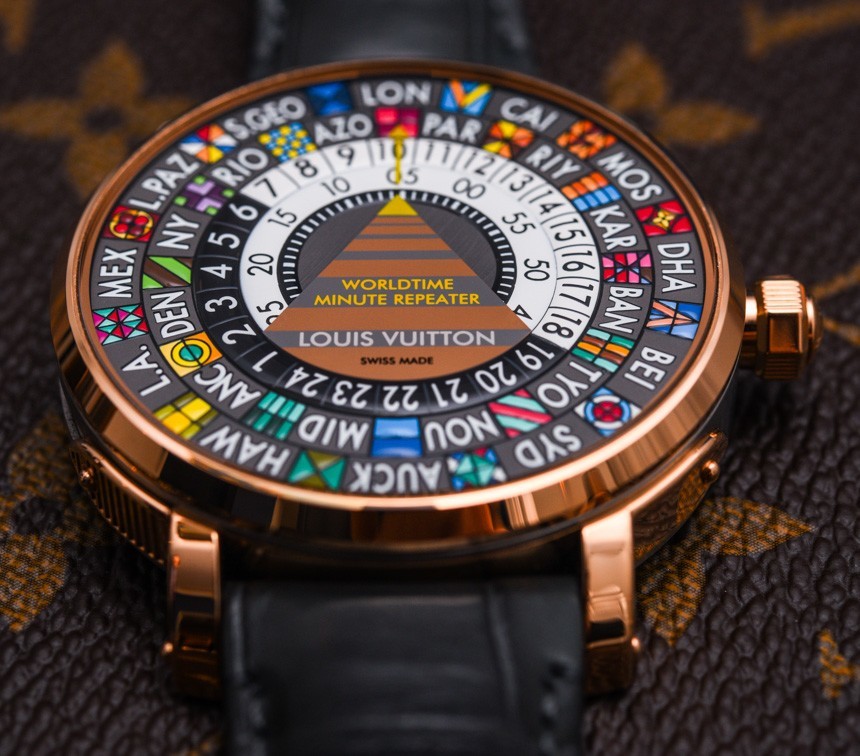 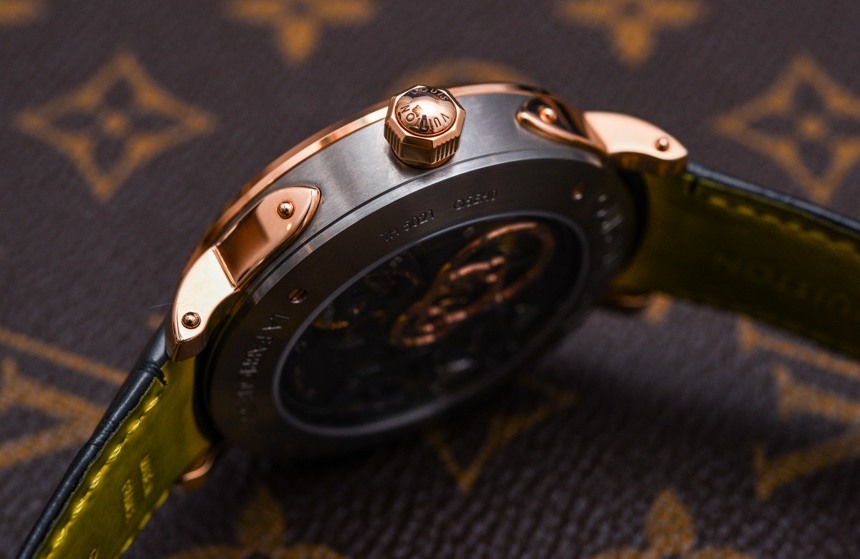 I studied the small, painted squares carefully and, with a bit of imagination, you can pick out some of the national flags’ colors, and maybe a very loosely based “ambiance” of the city in question (I’m looking at the vibrancy of Rio and the tranquility of Auckland, and the slightly “square” London), but these markers are really just beautiful little designs, rendered with skill and bucket-loads of joie de vie. It is also suggested that these markers were inspired by the monograms and symbols that adorn Louis Vuitton’s classic luggage. 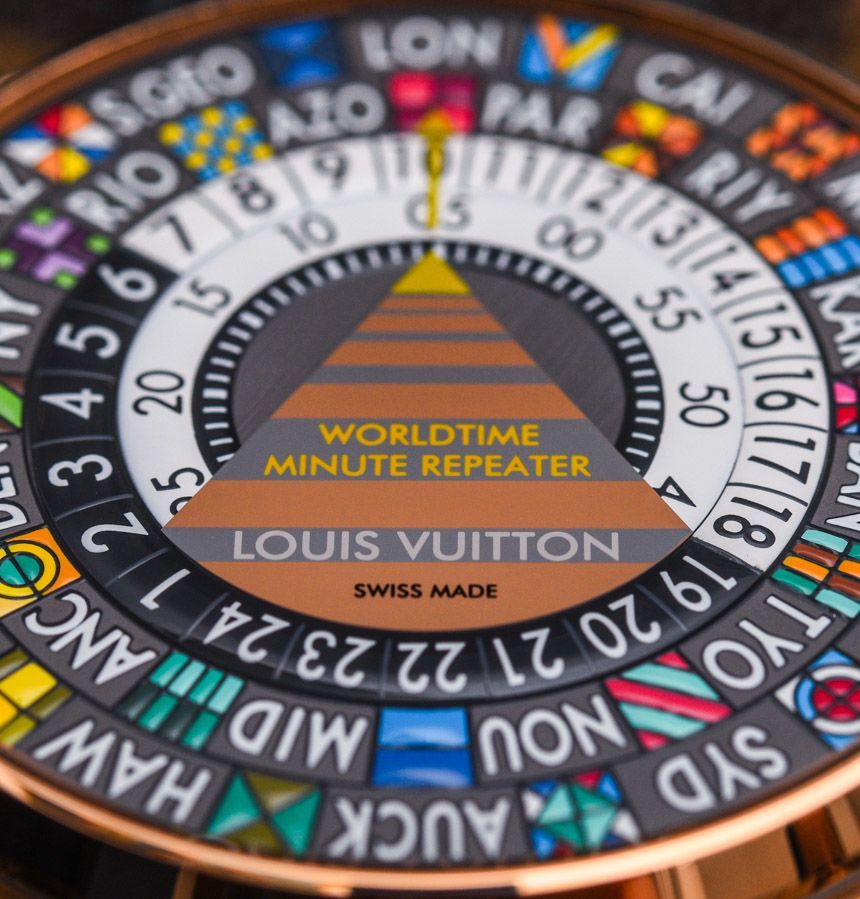 And, after all, is that not what travel is all about? Color, culture, and fun – unless it’s a dreary business trip, that is! This watch is not priced as a throwaway plaything, but it is certainly playful. To my eyes, it also appears to be an item that is also very well designed. I’m a big fan of case symmetry where functions allow, and Louis Vuitton have managed to sneak a sliding trigger responsible for the operation of the minute repeater on the side of the case between 7 and 8 o’clock. 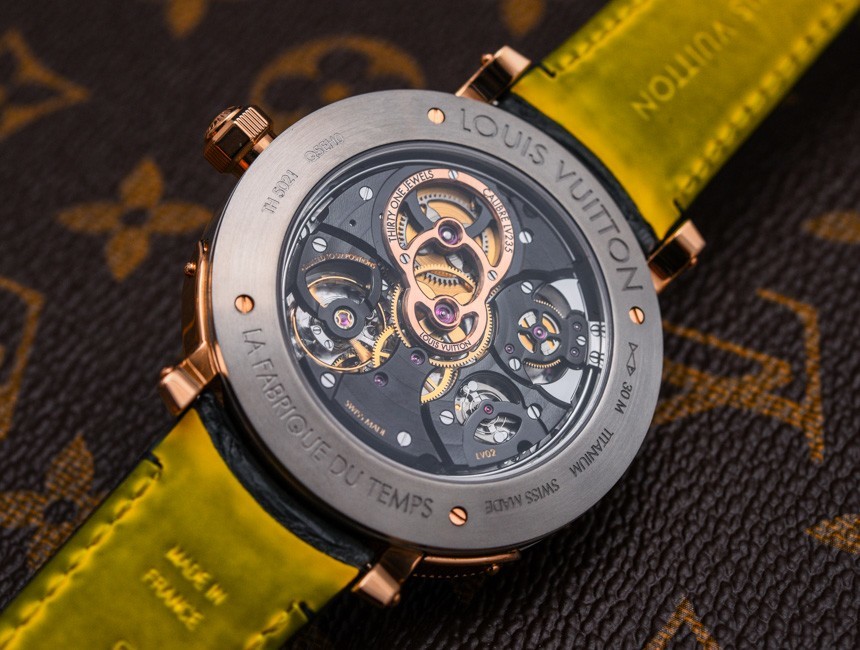 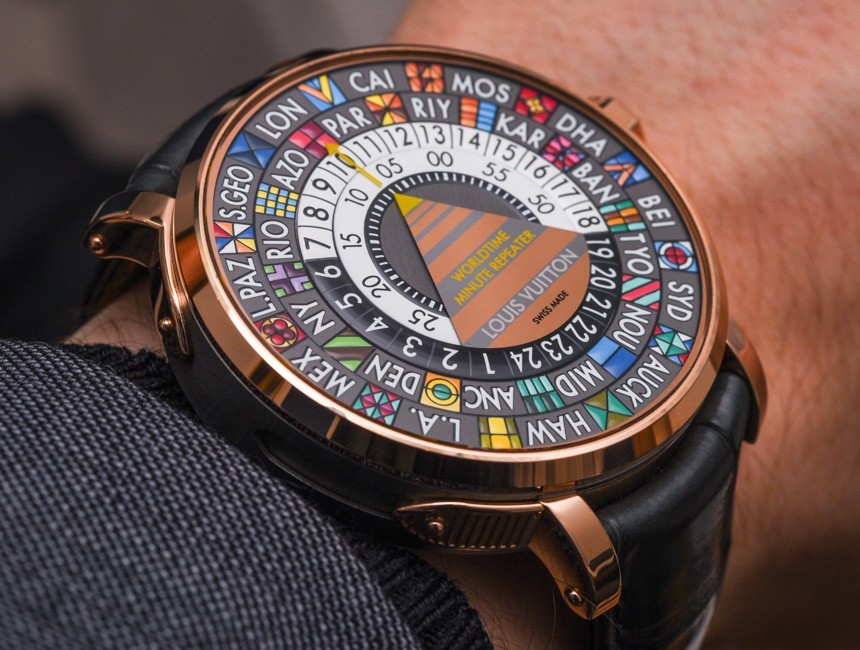 When you look this watch head-on, you won’t see a random protrusion, because the Louis Vuitton Escale Minute Repeater Worldtime has been designed with three ‘stooge’ triggers to match the one active button when not in use. Without knowledge of this hidden trigger’s function, the (almost) identical flank adornments appear as a cradle for the case middle. The only visible giveaways are the channel cut into the case flank for the travel of the trigger, and the fact the active trigger is fluted for grip. That’s a forgivable sacrifice, given the overall balance of this timepiece. 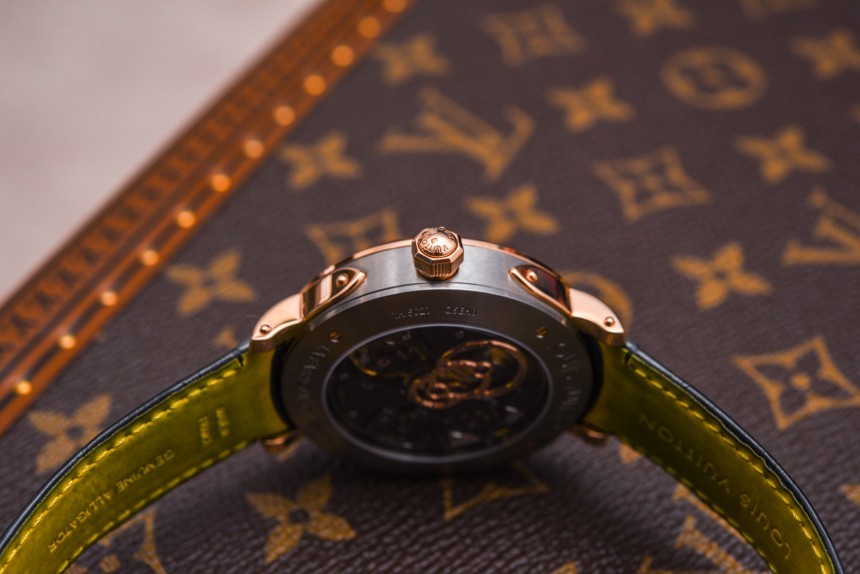 So, aside from a dial that takes around 40 hours to paint, features 38 colors, and 24 time zones, what else does it have to offer? Well, in spite of (or, perhaps, thanks to) the boldness of the dial, it is incredibly legible. By centralizing all the dial numbering and removing the use of hands, Louis Vuitton have managed to make the face of the Escale Minute Repeater Worldtime surprisingly uncluttered. By aligning your home city to the yellow arrow, which is painted on the underside of the crystal and extends from the tip of the pyramid (too clearly representative of the old capstones of solid gold that were placed atop the Great Pyramids for it to be coincidence), you also set the minute repeater. 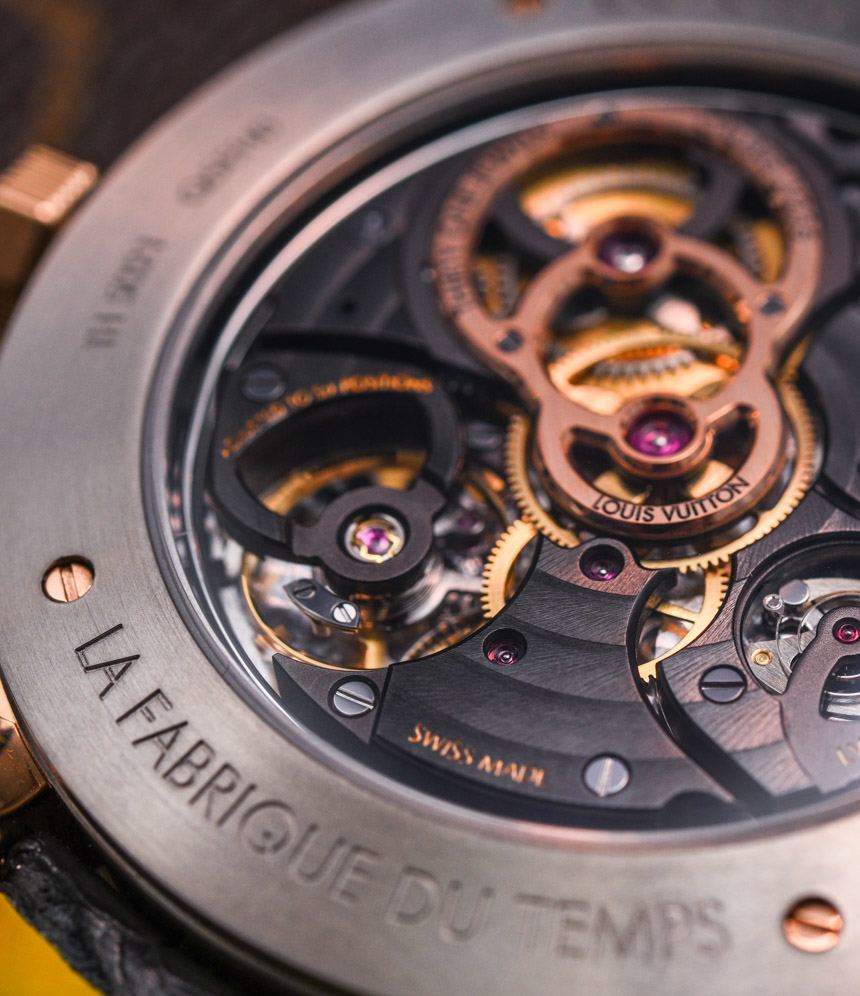 The movement allows the wearer to sound the time in his home time-zone regardless of the time-zone the watch is currently displaying, should they desire. This hand-wound calibre consists of 447 parts and boasts a reassuring 100-hour power reserve. The LV235 has been developed by the Fabrique du Temps Louis Vuitton Manufacture, and utilizes 31 rubies along with a 21,600vph operating speed. 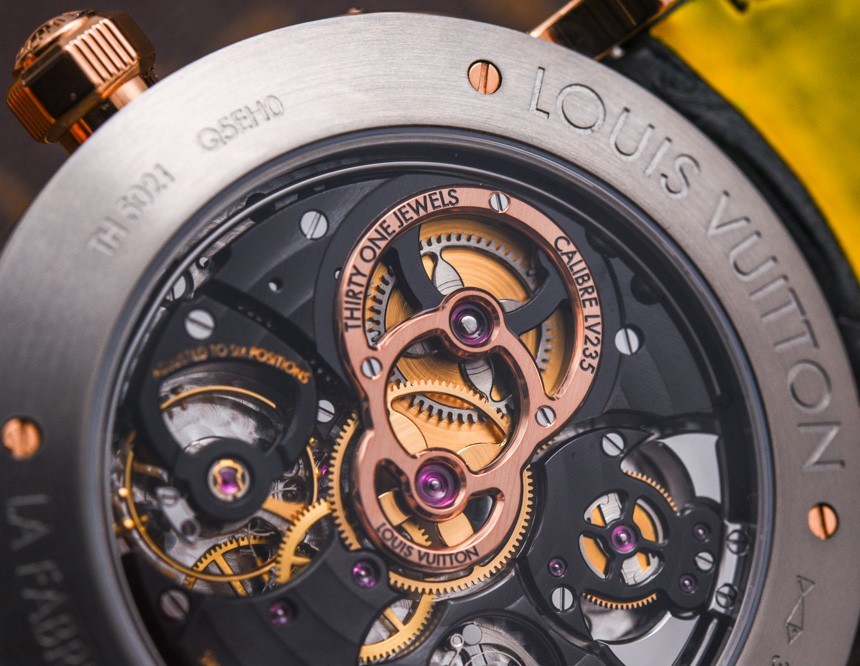 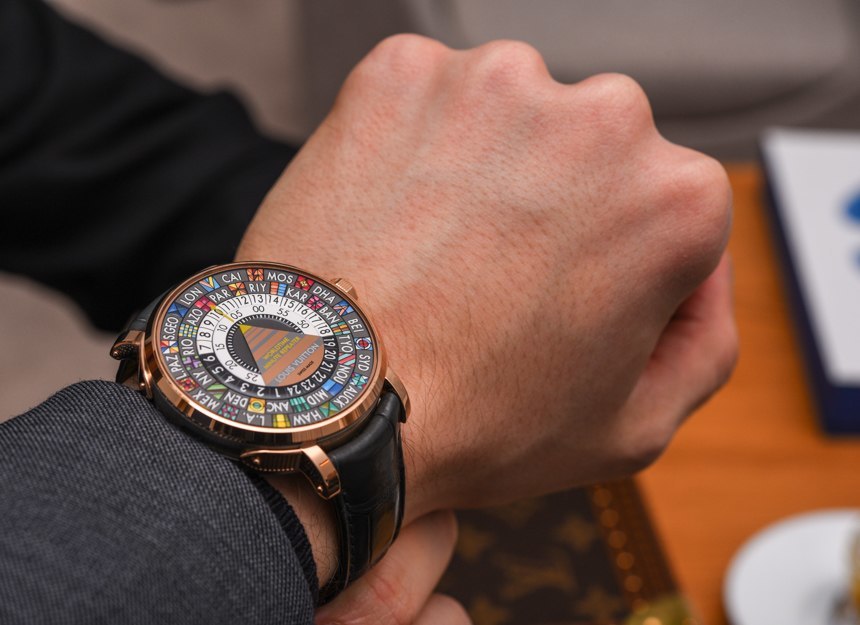 This watch is 44mm wide and boasts a rose gold and titanium case, which is water resistant to 30 meters. The absence of hands, replaced by rotating discs, means that the sapphire is unnaturally close to the dial. This creates an incredibly flat appearance. Normally, I would find myself arguing that dial depth is always a good thing, but in this instance, given the artistic flair that has gone into the conception and creation of this dial, it makes more sense to do away with it in favor of allowing the color to leap out of the watch. A secondary benefit of this reduced clearance is that the movement, which is not a simple mechanism, can be larger without engorging the height of the watch to unreasonable levels.

There will also be a steel version without the repeater function and a printed dial (which arguably detracts from the allure of this luxurious forerunner), which will be much more affordable at $10,000. With a price of $291,000, the Louis Vuitton Escale World Timer is far from a duty-free impulse buy, but it is a seriously fun watch, with a serious side. louisvuitton.com