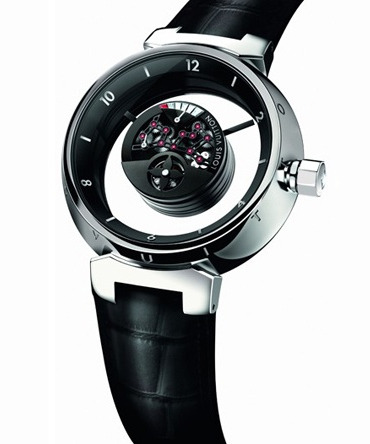 Louis Vuitton watches always feel special. They don’t release new watches too often, and when they do, they barely give any information about them – they are also quite rare. They have been playing with the Tambour case for a while, adding new designs and styles all the time. This is likely to be the “highest-end” Louis Vuitton Tambour watch of them all. My favorite is still the Louis Vuitton Tambour Diver watch. Now you might not think of Louis Vuitton as a watch maker. You’d be right in theory, but you’d be missing a major point. The LVMH (Louis Vuitton Moet Hennessy) Group owns several important watch brands including Zenith, Tag Heuer, and Hublot. This gives them a bit watch making asset pool to pull from. So in a sense, Louis Vuitton branded watches are not just another fashion watch. While they have been making watches for a little while, and this new Tambour Mystérieuse watch is the first in-house movement for them. Previously they pulled movements from else where. The price of the new watch is very high, almost too optimistically so, but we can get to that in a moment. 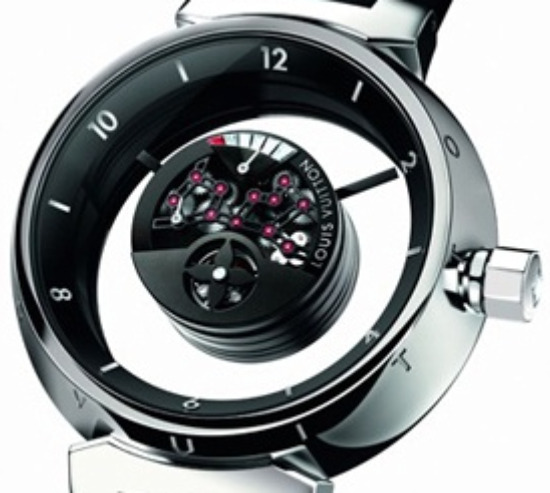 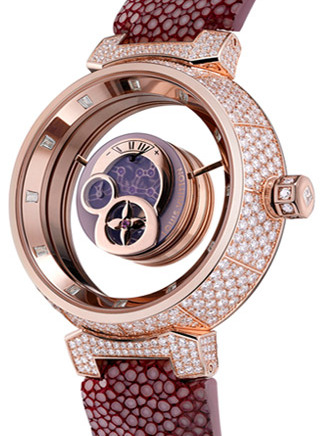 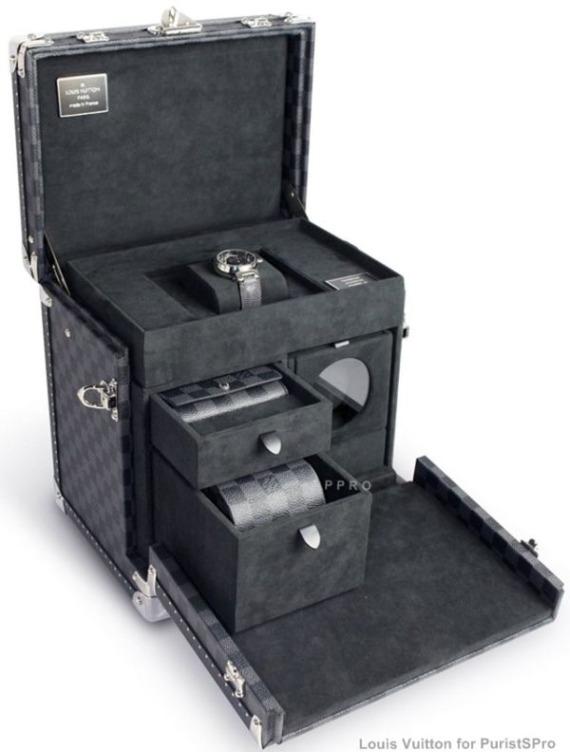 The Louis Vuitton Tambour Mystérieuse has a floating manually wound LV115 movement in the center of the dial sandwiched between sapphire crystals. The “Mystérieuse” part comes from the fact that you cannot see how the movement is connected to the rest of the watch (or for the crown for that matter). Not really sure how it works actually. I guess that if there is no actual hidden rod, there would have to be a special sapphire crystal that itself turns, acting to adjust the time and wind the movement. The good news is that the watch has a power reserve of over eight days, which means you won’t have to wind it all that often. The movement itself is has a built-in power reserve indicator, and has been designed to look quite pretty with the exposed palette jewels. The hands of the watch are attached inside and come out from the sides of the movement. It is a nice effect, and relatively legible. Certainly unique. The Tambour case itself is likely to be quite thick, but its tapered look is designed to allow for that without it looking too awkward. The highly sloped chapter ring around the face has attractive but simple hour markers. The lug structures are almost futuristic looking, but tasteful, and specially made alligator straps bit into the lug settings for a satisfying cohesive look.

Owner specified customization is a big part of the watch. The 42.5mm wide case is available in yellow, red, or white gold, or platinum. Further, an interesting area of customization are the jewels that make up the power reserve indicator. They can be diamonds, rubies, or sapphires, in at least a couple different cuts. Other customizable elements of the watch may also exist.

The watch itself comes in a mini customizable Louis Vuitton leather trunk, which is kinda cute. It ought to for the $265,000 asking price of this highly exclusive and customizable new luxury watch from Louis Vuitton. The watch also takes about a year to make. Complex watches take this long, and since the watch is customizable, you’ll want to make it your own. Better put your order in now.