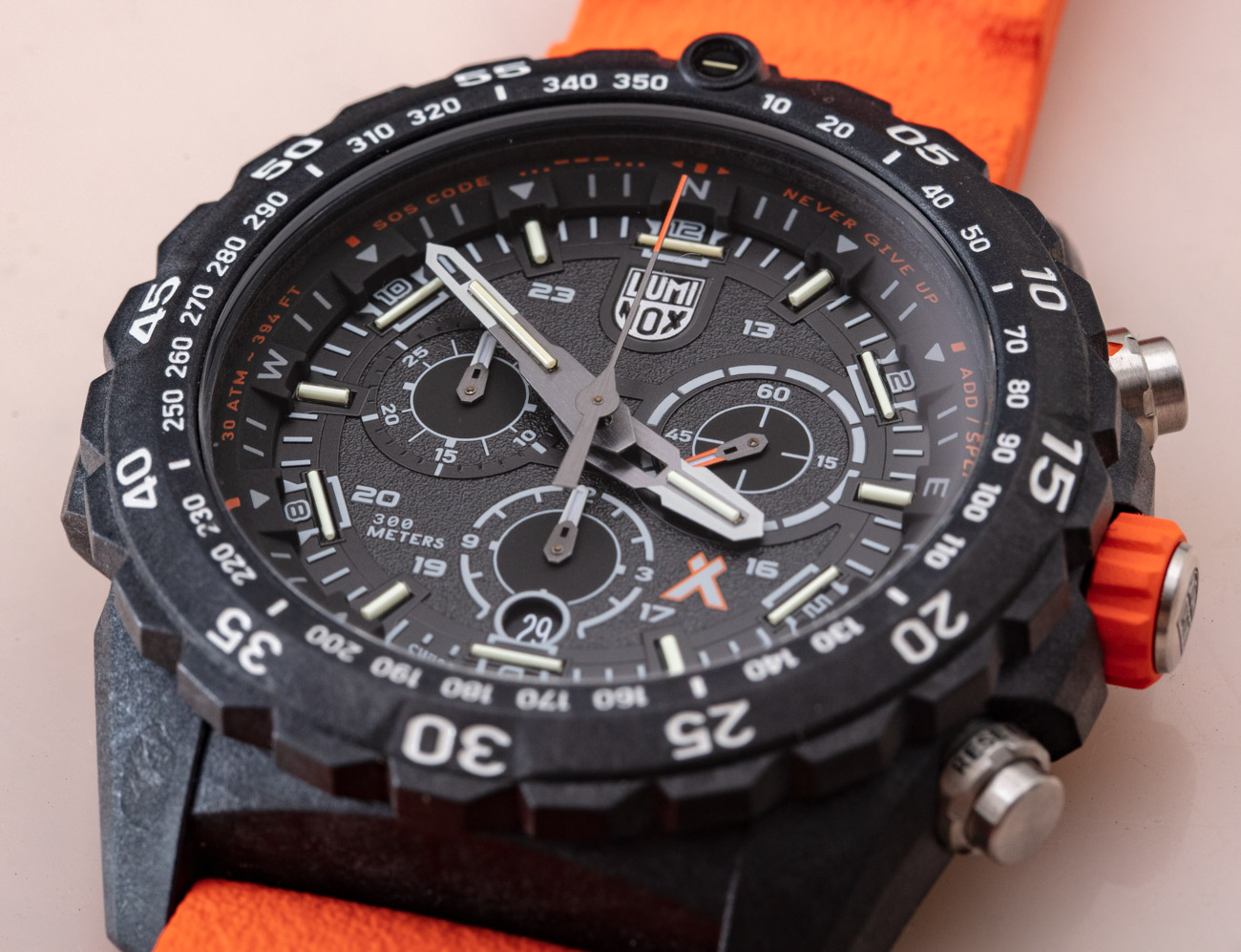 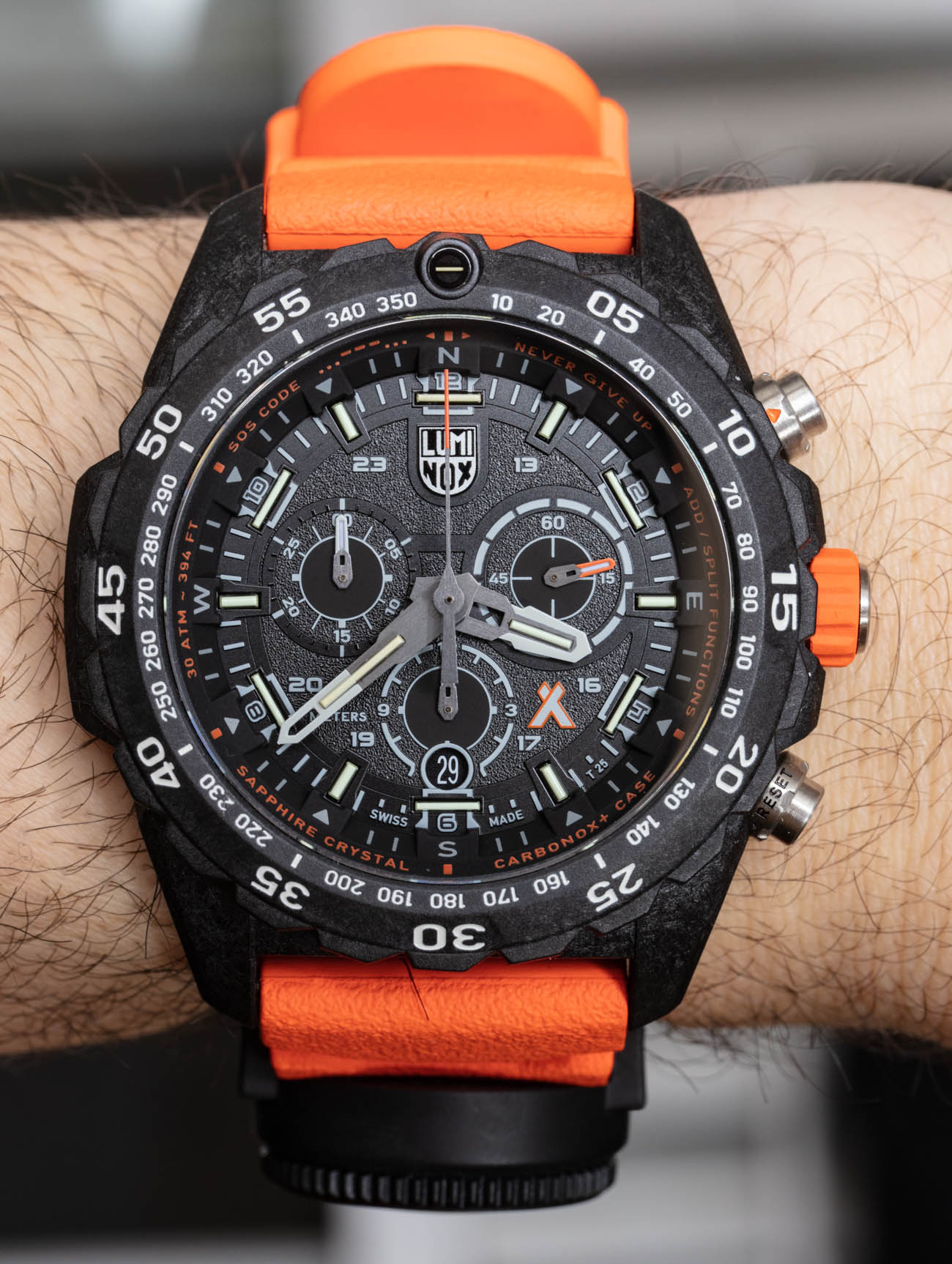 Swiss watch maker Luminox and survivalist personality and television star Bear Grylls have recently debuted a series of new Bear Grylls-branded Luminox timepieces. The debut “Bear Grylls Survival” watches comes in six varieties with models in Luminox’s Land, Sea, and Master series ranges. Luminox already seems to have confirmed that the Bear Grylls relationship has some years ahead of it and has already suggested that more models are on the horizon. This relationship makes a lot of sense, and the best word to describe this reference 3749 Luminox Bear Grylls Survival MASTER Series watch is “fun.”

Let’s be honest that, while Luminox is a brand that produces timepieces that could easily endure a survivalist scenario, the chances of someone being in a survivalist situation with one of these particular Bear Grylls watches is slim. The goal of these watches is to celebrate the values that Bear Grylls stands for (such as his “Never Give Up,” motto which is printed in various forms on the watches), as well as offer timepiece-lovers a compelling way of enjoying the adventuring stars’ exploits on their wrists. So, let’s take a quick look at Bear Grylls as a watch-wearer and then the Luminox watch itself.

Bear Grylls has never been the most daredevil (in terms of putting himself in as many actually life-threatening situations) of televised survivalists, but he is probably the most popular, given the large variety of programs and events he has hosted and books he has published. A former British SAS serviceperson, Bear Grylls became famous on the television show Man v. Wild on the Discovery Channel. At the time, I was heavily interested in the survivalist show genre and wrote about what timepiece Bear Grylls chose to wear on Man v. Wild here (and then again here). In addition to practical Casio watches, Bear Grylls has also been known to wear Brietling and Bremont watches during later adventures. This is someone who clearly cares about his gear.

Luminox is actually closer to Casio in terms of practicality during a survivalist scenario, even though this collection does slant a bit on the high-end side (for what it is). While the Bear Grylls Survival watches currently start at under $450, this fancier Bear Grylls Survival Master Series 3749 is close to $900. The reference 3749 is also joined by the reference 3741, which is an identical watch save for the strap, black versus the 3749’s textured bright orange strap (produced from natural rubber). 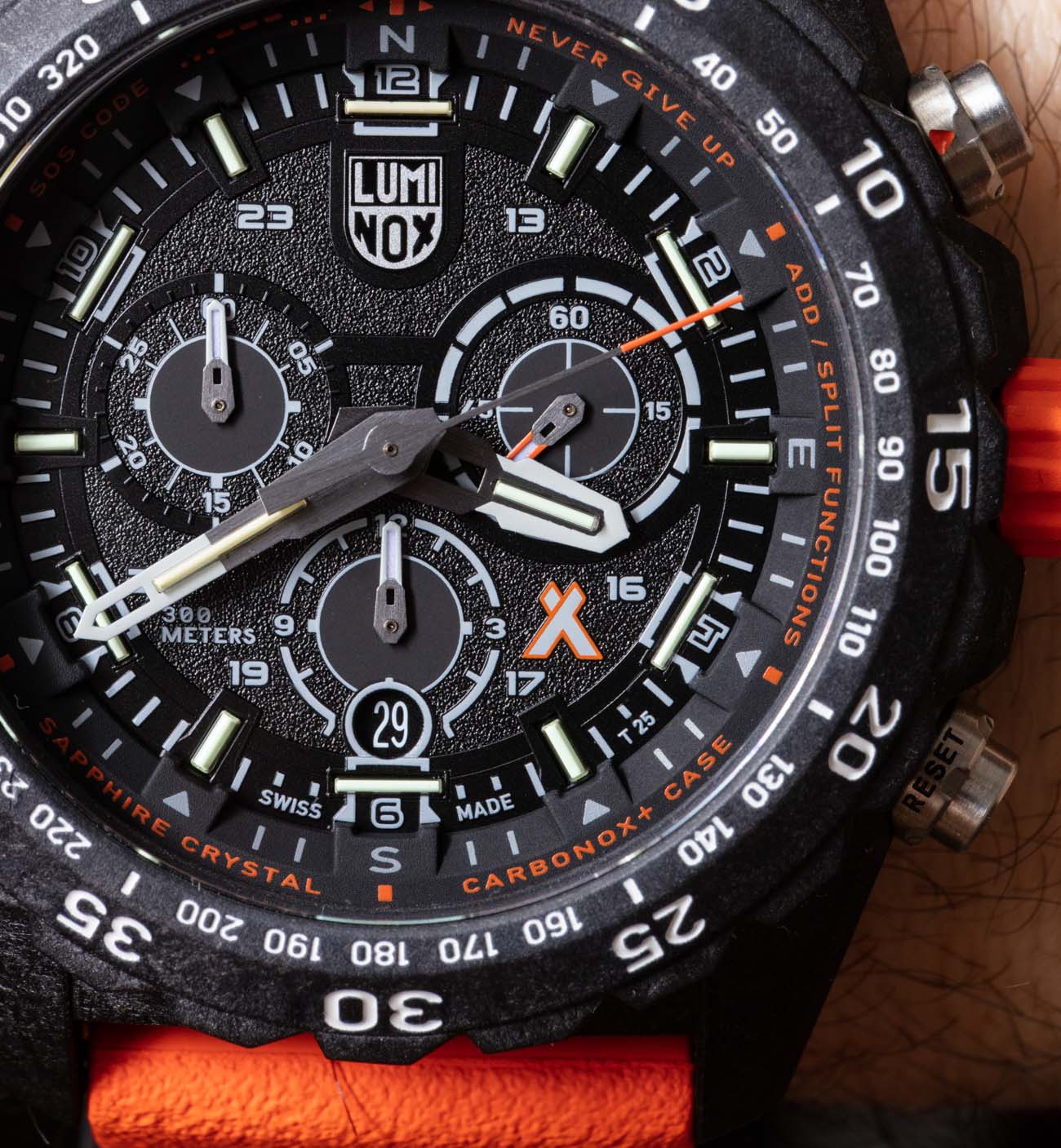 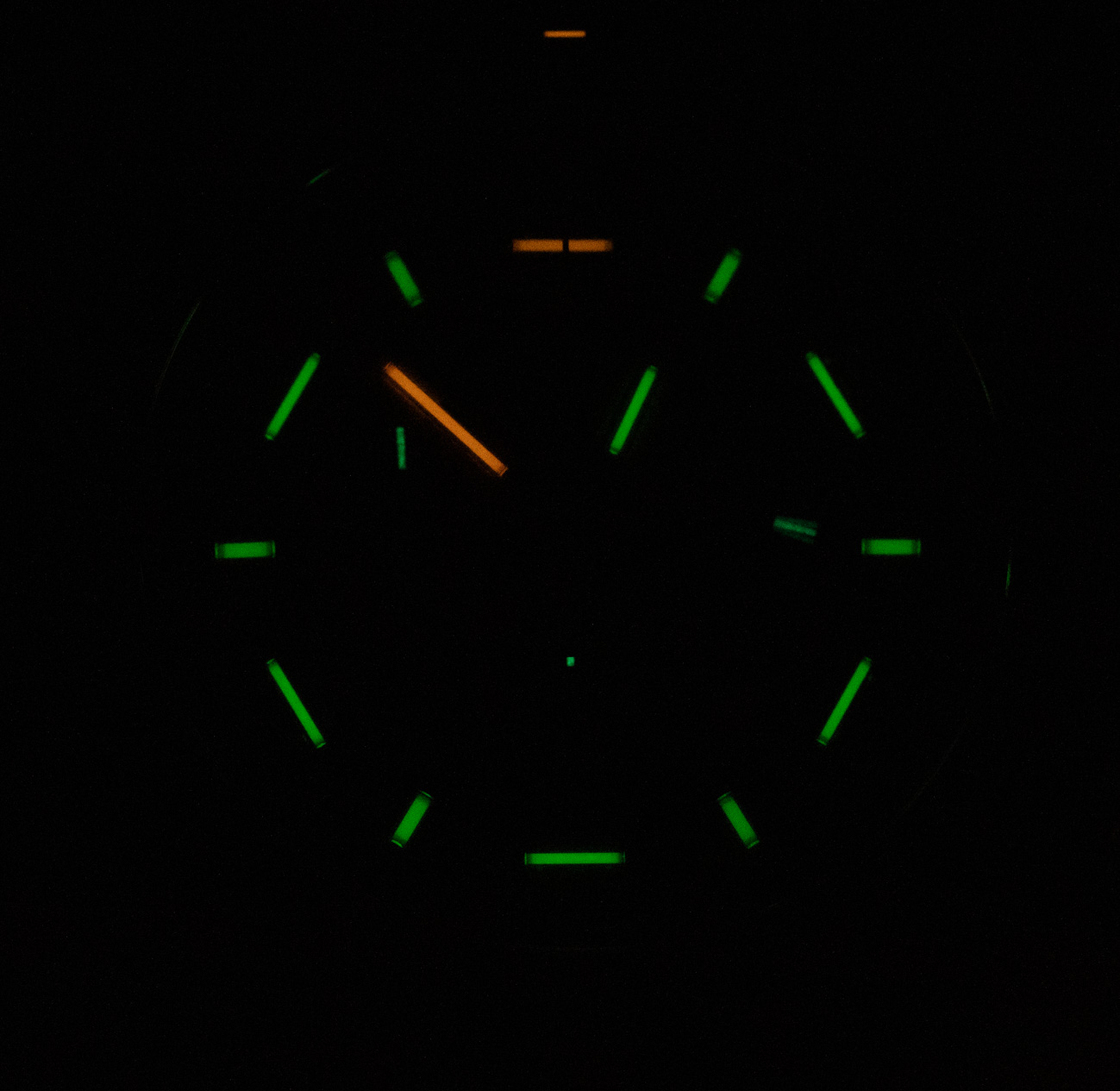 Perhaps the most useful tool on the watch (aside from the time) in a survival situation is the detachable strap compass. This is not a new innovation and has been available for wristwatches as long as I can remember (I am guessing since at least the 1980s). Luminox even offers these on other watches. What Luminox has done here is chosen one of these compasses to accompany the watch and also give it a new color scheme. The small analog compass satisfies part of this watch’s overall personality. Not everyone will like the look of a compass bulging out of the side of their wrist, but the tool is genuinely useful and well-integrated into the package. Again, the compass can be removed from the strap and even put on other straps if you choose. One complaint about the strap is that I believe the color (or ideally the material) of the buckle should match the case. Here, we have a black-colored case and a natural steel buckle. I believe the watch would look better if Luminox had chosen to pair it with black-colored buckle hardware.

Anyone who is actually an adventurer can tell you that the Master Series 3479 has more than is necessary on the watch dial. Here Luminox is very G-Shock in its approach to design, going to great lengths to make the dial have personality and seem modern outside of sheer utilitarian considerations. All sorts of text, shapes, and graphics on the dial are not strictly necessary, per se, but they do add to the character of the watch, which, again, is more toy-like than it is cold and instrumental. Being a “fun toy” is really what this watch is all about. Luminox took one of its sturdiest watches with the best specs and dressed it up in Bear Grylls form as a survival watch. This fits so well into current macho pop culture male ideals that the concept simply works, no matter if some watch enthusiasts point out how there is a bit more flair on this watch than you might expect on a “real survival watch.” What Bear Grylls and his contemporaries have shown us is that there is no one “real survival watch” and that the point is wearing a durable enough timepiece all the time as well as knowing how to use it to help with survival efforts, should the occasion present itself. 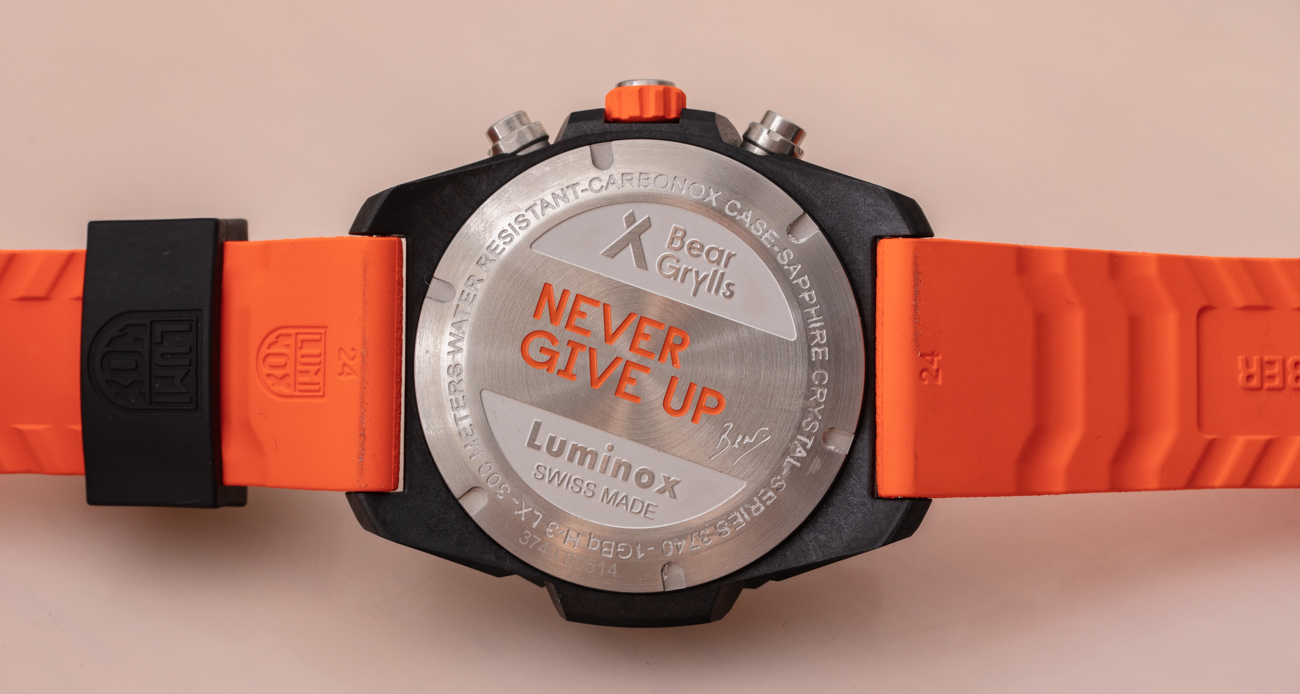 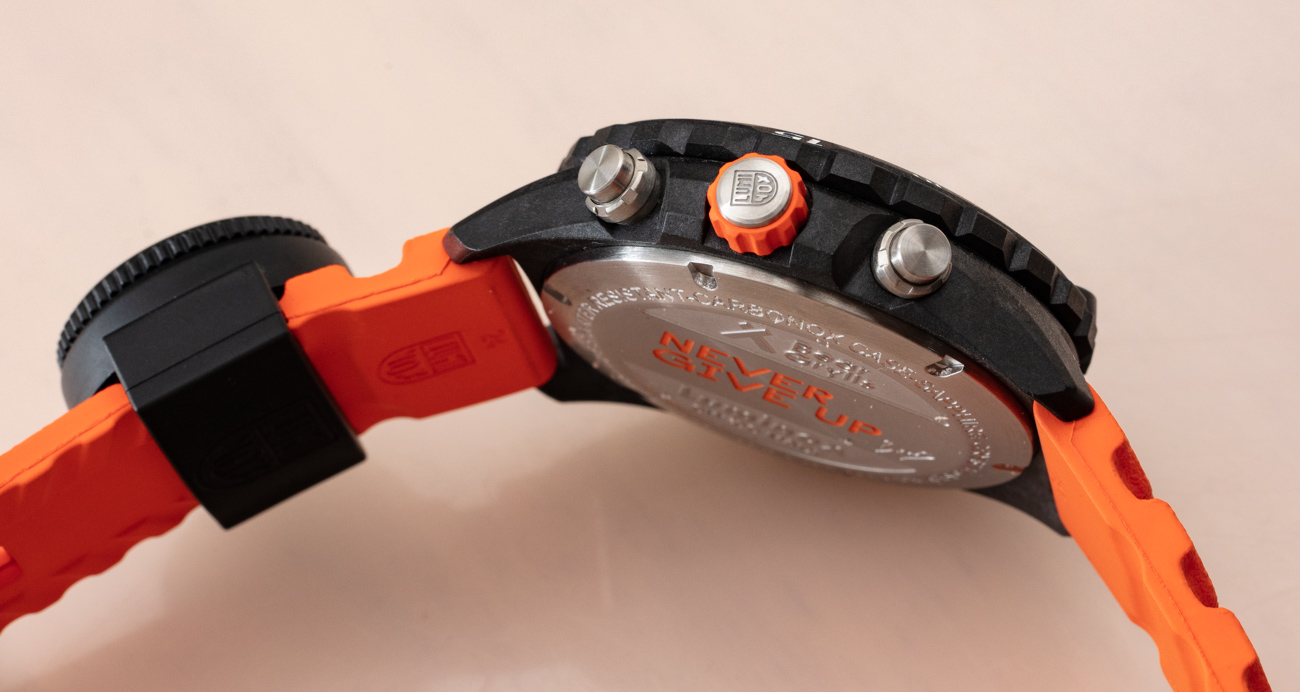 The watch itself is a chunky 45mm-wide and 14mm-thick. It has 24mm-wide straps, also on the thick side. Pretty much every part of this watch feels big and masculine on purpose. The case is, however, quite light at just 98 grams, thanks to being produced from a type of forged carbon material Luminox calls Carbonox. The textured black case is water resistant to 300 meters and is capped with an AR-coated sapphire crystal.

Around the dial is a uni-directional rotating bezel (also in Carbonox) that has a protected tritium gas tube lume pip at 12 o’clock. As is the case with most Luminox watches, the Bear Grylls Survival series makes use of self-illuminating tritium gas tubes on the hands and hour markers for effortless darkness illumination. Luminox and the few other high-end watch brands that use them (Marathon, Traser, Ball) really do offer a superior dial-viewing experience than most watches with traditional painted luminant that needs to be charged by light. 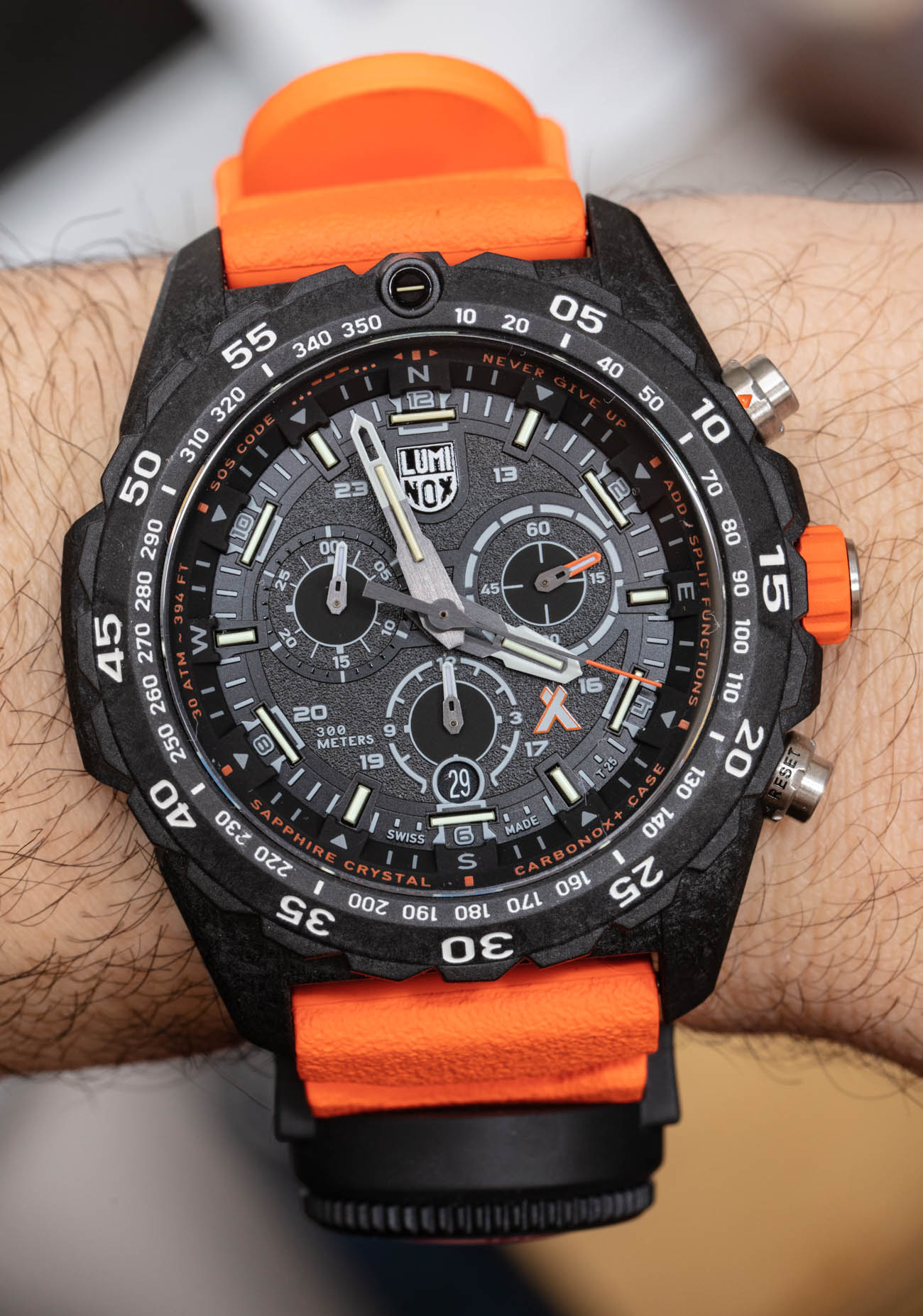 The Master Series 3749 dial has easy-to-see hands thanks to their neat design and large size. This is crucial, as the dial is otherwise full of markers and text that could easily obscure hand visibility. With the chronograph subdials pretty much all available space on the dial is used for something. That even extends to the flange ring around the dial, which has text that mixes useful information with statements such as “Sapphire Crystal.” Again, as a big boy’s toy (not a bad thing), the dial of the Bear Grylls Survival Master Series is appropriate.

Inside the case powering the watch is a Swiss-made Ronda 5030.D analog quartz movement. The movement has the time, date, and 12-hour chronograph that has a split-second function. It is actually a pretty good movement in the scheme of quartz mechanisms and, with over 50 months of battery life, it makes for a dependable adventure or sport watch companion that can be beat up at will. 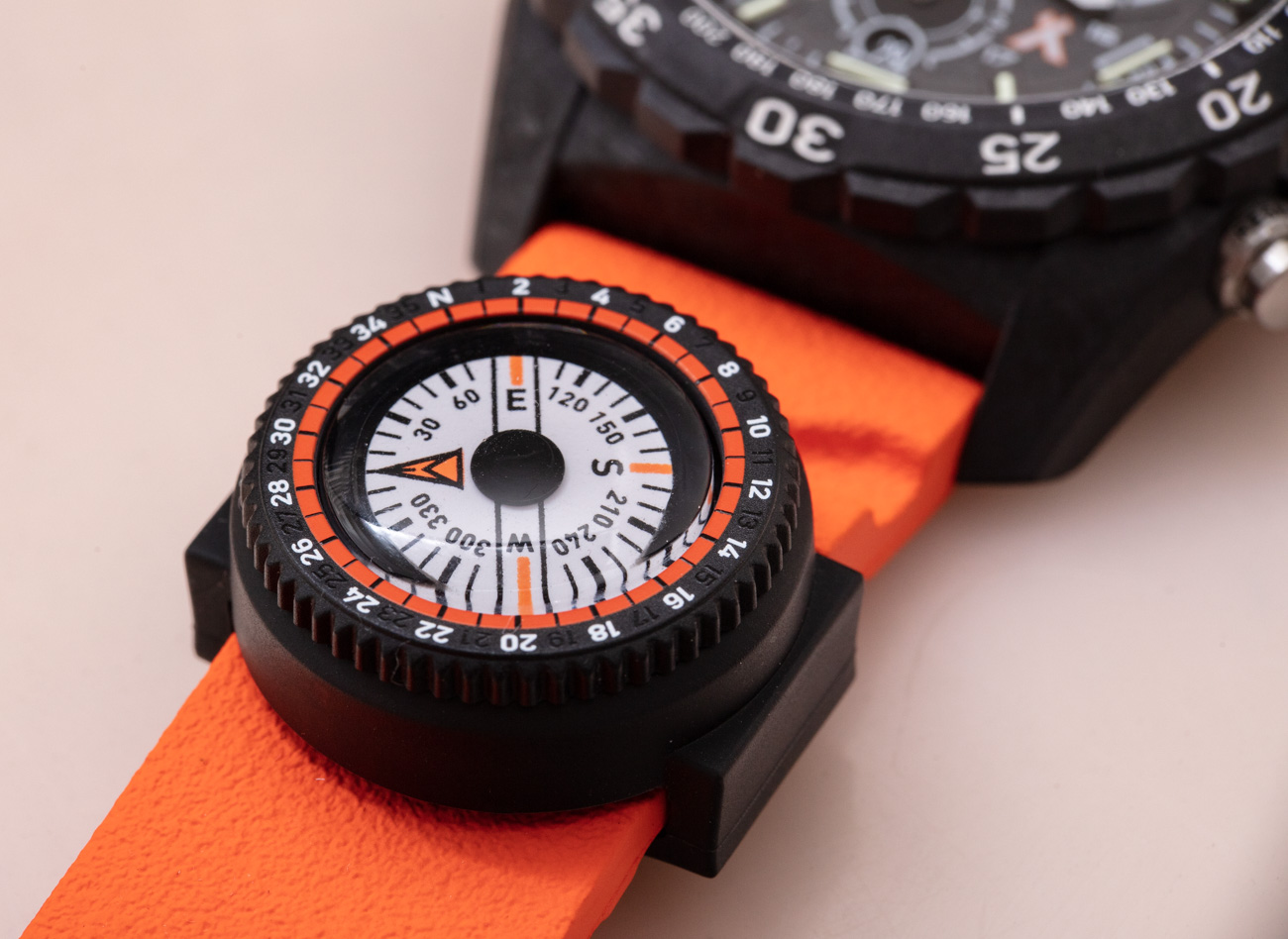 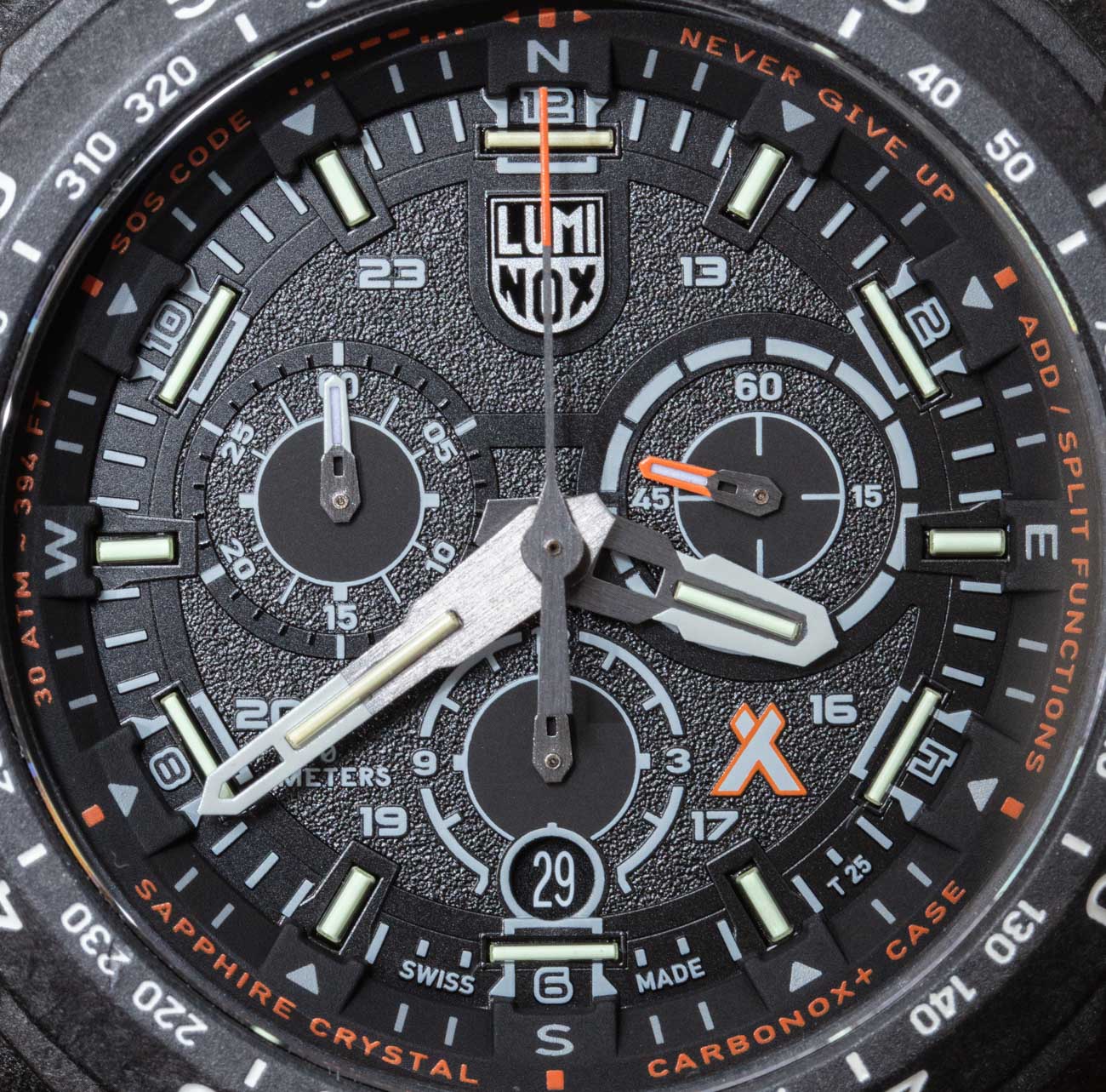 Those will smaller wrists might want to try on the Luminox Master Series 3749 prior to buying it, as this watch appears to be intended to look best on those with larger wrists. That is simply a deduction based on the relative size and proportions of the watch case and strap. I am wearing the strap on its lowest buckle hole space (it can’t go smaller), and I had to move the compass above where it might normally go.

Luminox’s relationship with Bear Grylls is a good fit. Luminox can make the most out of it by properly marketing these watches because I think the potential customer base is much larger than just watch collectors. For the average guy who wants a dependable tool watch that has a fun personality behind it linked to an approachable celebrity, this watch does it. The Master Series 3749 isn’t for everyone, but that’s OK because modern-looking analog tactical watches do have their place in the market. If anything, the Bear Grylls Survival watches are designed for a younger audience than might be ready to purchase them right now. I very much see an “under 35” sense of style to these watches, so Luminox will need to position them accordingly. For anyone else who likes them, it isn’t the world’s perfect tool watch, but what it lacks in design refinement, it makes up for in personality and cheerfulness. Like Bear Grylls himself who smiles in even difficult situations, the Luminox Bear Grylls Survival Master Series 3749 will merrily follow you on all your adventures, and look very cheerful while doing so. Price for the Luminox Bear Grylls Survival Master Series 3749 watch is $890 USD. Learn more at the Luminox website here.

Necessary Data
>Brand: Luminox
>Model: Bear Grylls Survival MASTER Series 3749
>Price: $890 USD
>Size: 45mm-wide, 14mm-thick, and 55mm lug-to-lug distance.
>When reviewer would personally wear it: As a very decent hiking, beach, and vacation watch when you can get away with wearing this much orange.
>Friend we’d recommend it to first: Bear Grylls fans, for sure, as this is the top timepiece in his new collection with Luminox; also people who get a kick out of tricked-out pickup trucks and other men’s gear with flair.
>Best characteristic of watch: Quality components add to sense of trust in this “survival watch.” Overall composition is fun, despite being a bit haphazard in design. Compass is a welcome accessory.
>Worst characteristic of watch: Large proportions won’t work on all wrists. Dial probably has too much printed on it. Arguably expensive, given some competitor quartz chronograph adventure watches on the market. Buckle color should match the case.